The HGST Deskstar NAS is built on HGST’s 3.5-inch 7,200RPM Deskstar consumer drive platform and is intended for consumer and small business NAS appliances which are typically sold diskless. While the NAS designation implies a priority on reliability and capacity over performance, HGST has used a 7,200RPM platform rather than the typical 5,400RPM for drives in this class and reports seek times of less than 12ms in manufacturer benchmarks. The 7,200 RPM spindle speed is primarily employed in order to reduce the amount of time the drive must remain active in order to complete I/O operations, potentially giving small NAS users a higher-performance alternative to the standard 5K NAS drives or much more expensive enterprise-class HDDs.

The HGST Deskstar NAS is built on HGST’s 3.5-inch 7,200RPM Deskstar consumer drive platform and is intended for consumer and small business NAS appliances which are typically sold diskless. While the NAS designation implies a priority on reliability and capacity over performance, HGST has used a 7,200RPM platform rather than the typical 5,400RPM for drives in this class and reports seek times of less than 12ms in manufacturer benchmarks. The 7,200 RPM spindle speed is primarily employed in order to reduce the amount of time the drive must remain active in order to complete I/O operations, potentially giving small NAS users a higher-performance alternative to the standard 5K NAS drives or much more expensive enterprise-class HDDs. 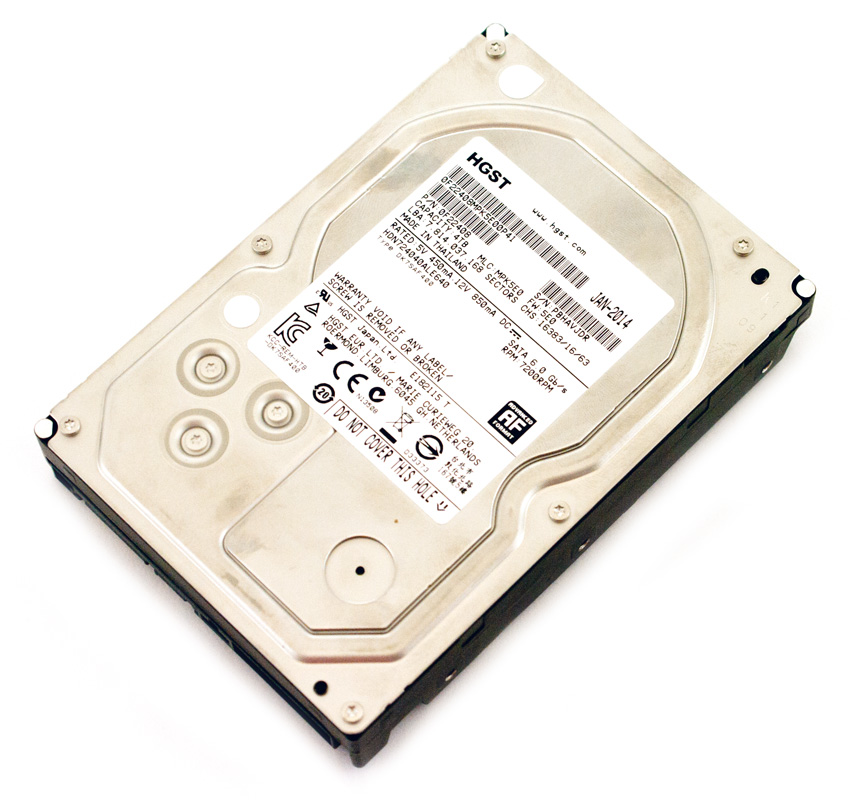 HGST specifies reliability of one million hours mean time between failures and offers a three year warranty, in line with competing NAS drives from Seagate and WD. The Deskstar NAS does incorporate an unusual feature among consumer HDDs: a rotational vibration sensor. Vibration sensors are most often used for drives intended to be rack mounted in environments where vibration can interfere with consumer drive operation, which indicates HGST sees a higher ceiling for their NAS drive in terms of use cases. The Deskstar NAS also offers configurable advanced error recovery control to fine-tune RAID performance.

The HGST NAS drives are shipping now in 3TB and 4TB capacities with street pricing of $140 and $195 respectively. Our review units are 8x 4TB.

The HGST Deskstar NAS is built on the established Deskstar line of consumer hard drives, and its casing reveals no significant departures from its sibling drives. 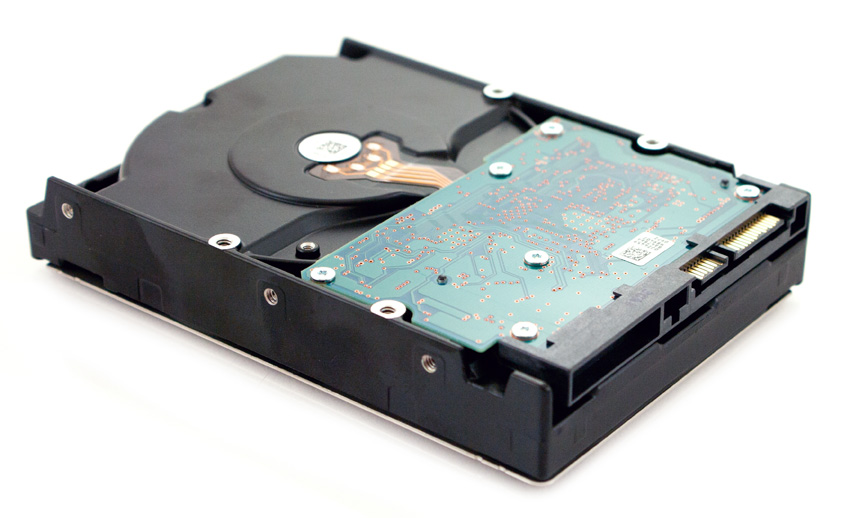 A closer look at the Deskstar NAS controller PCB reveals the LSI TNNHV77320 which powers the drive. 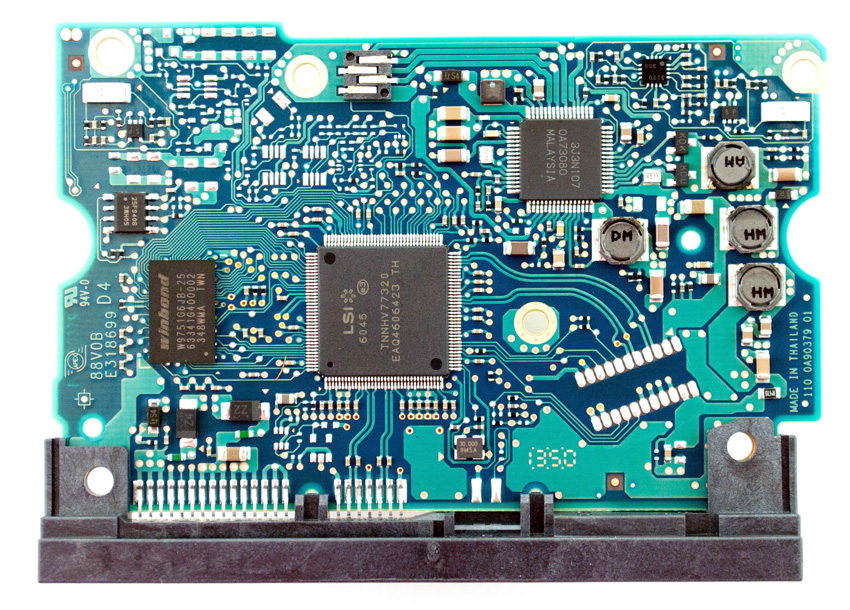 We also conducted a suite of synthetic benchmarks to measure the performance of an array of HGST Deskstar NAS drives in our Synology DS1813+ testbed to gauge the drive's performance in a mainstream NAS appliance.

Once preconditioning is complete, each device being compared is then tested across multiple thread/queue depth profiles to show performance under light and heavy usage. Our synthetic workload analysis for the HGST Deskstar NAS uses 4k, 8k, and 128k profiles which are widely used in manufacturer specifications and benchmarks.

In order to compare the benchmark results of the Deskstar NAS to past StorageReview NAS HDD benchmarks, we will also make use of two synthetic workload profiles meant to simulate fileserver and webserver environments.

In our benchmark of 4k transfer throughput, the HGST Deskstar NAS performed competently, winding up in a dead heat for second place with the Seagate Constellation CS with read throughput at 115IOPS and writes at 160IOPS.

Plotting the average latency results for the 4k profile again places the Deskstar NAS in an overall second-place performance to the WD Se.

The HGST Deskstar NAS also limited its latency spikes during the 4k profile to a second-place result.

Plotting the standard deviation of 4k latency results shows the Deskstar NAS as a consistent latency performer with 4k transfers, although its results are not as consistent overall as the WD Se.

The HGST Deskstar NAS 4TB performed well in the 8k benchmark, keeping pace with the WD Se throughout the range of thread counts and queue depths used. 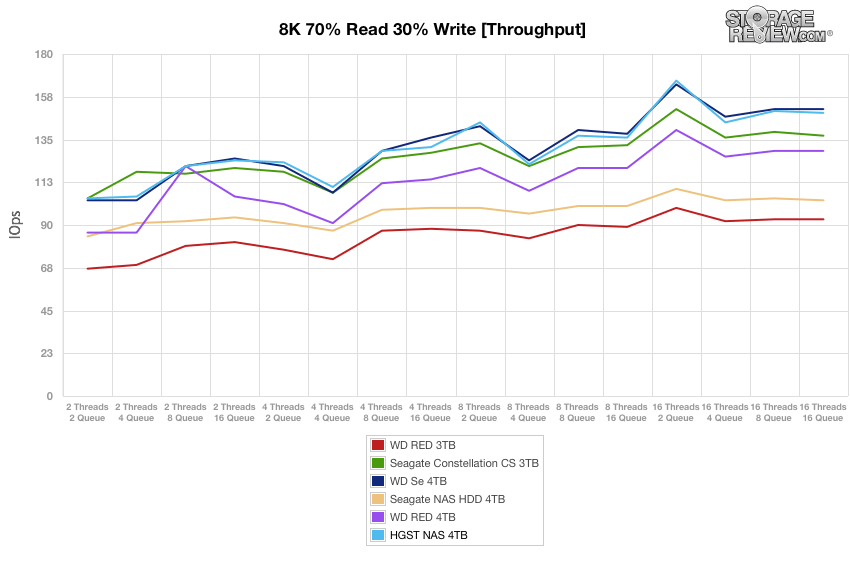 The 8k 70/30 average latency results for the Deskstar NAS, like its comparable drives in this benchmark, are constrained more by the minimum latency of the testbed than variations in performance between the drives. 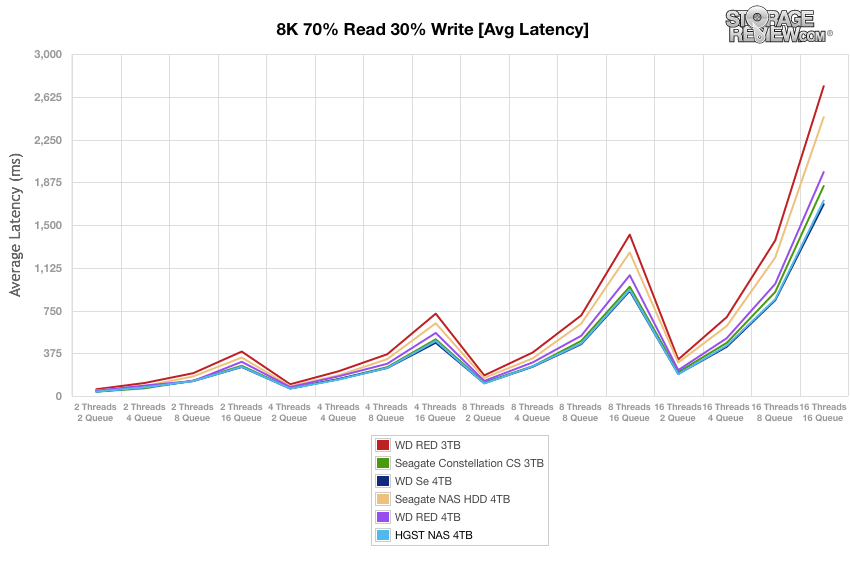 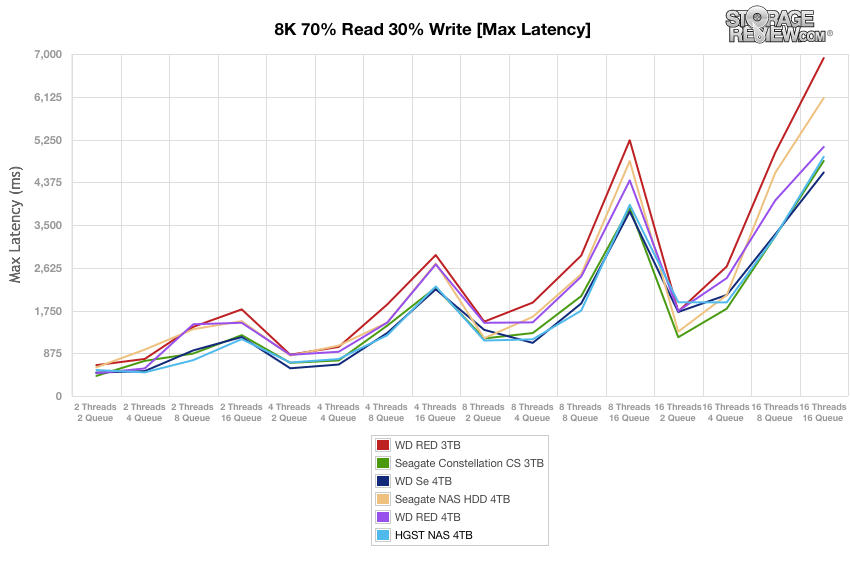 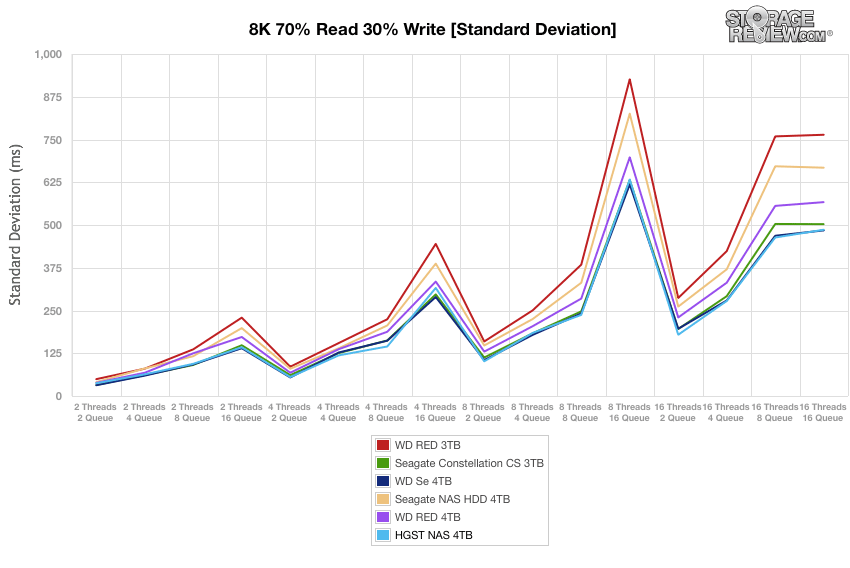 The synthetic fileserver workload uses combinations of transfers meant to simulate the I/O activities of fileserver storage at steady state. The HGST Deskstar NAS maintains a second-place throughput performance to the WD Se throughout the fileserver profile. 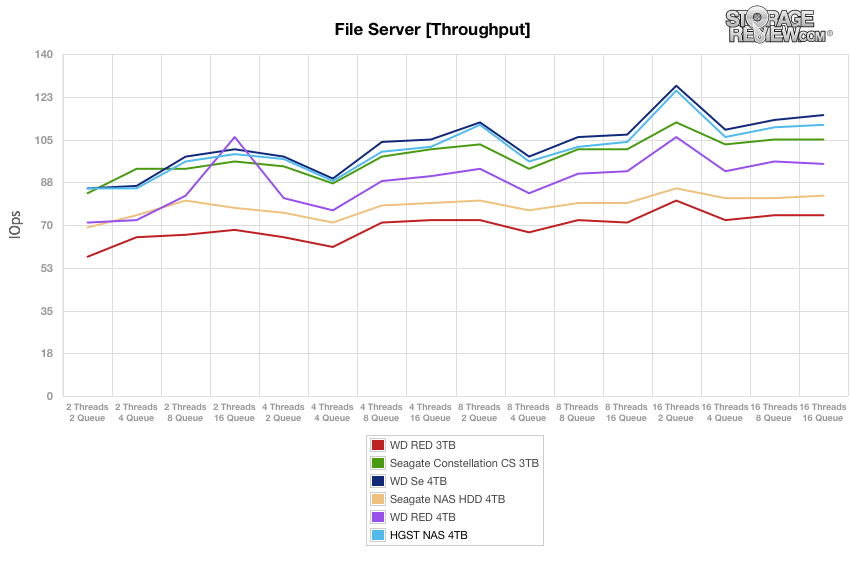 HGST Deskstar NAS average latency results are also among the best in its class during the synthetic fileserver benchmark, peaking at 2,285ms with 16 threads and a queue depth of 16. 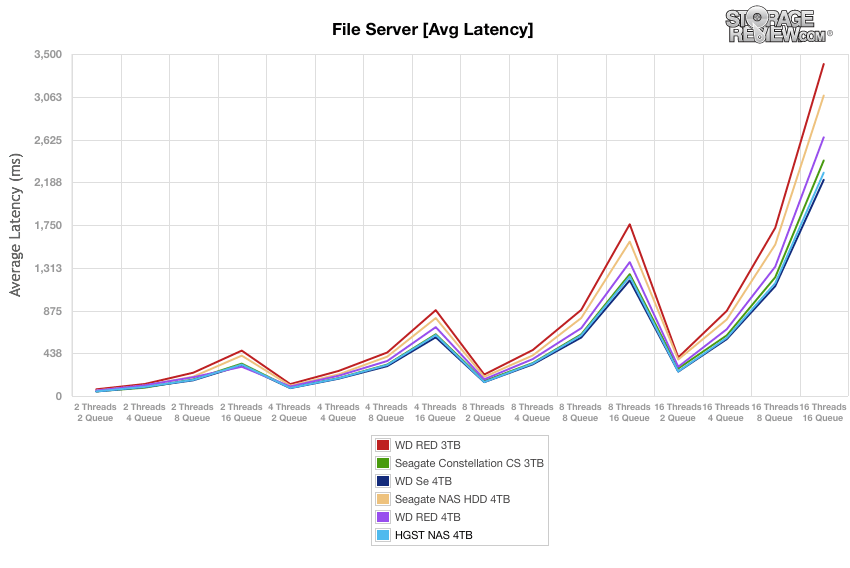 The Deskstar NAS maintained maximum latencies within the best three across the variations in thread count and queue depth. 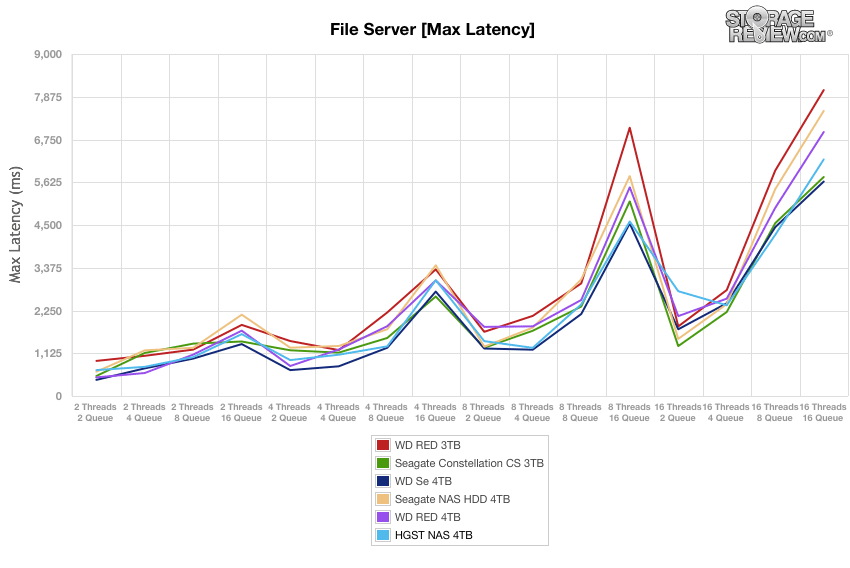 In our comparison of standard deviation of the latency results during the fileserver synthetic benchmark, the HGST Deskstar NAS has the second most consistent latencies, just behind the WD Se. 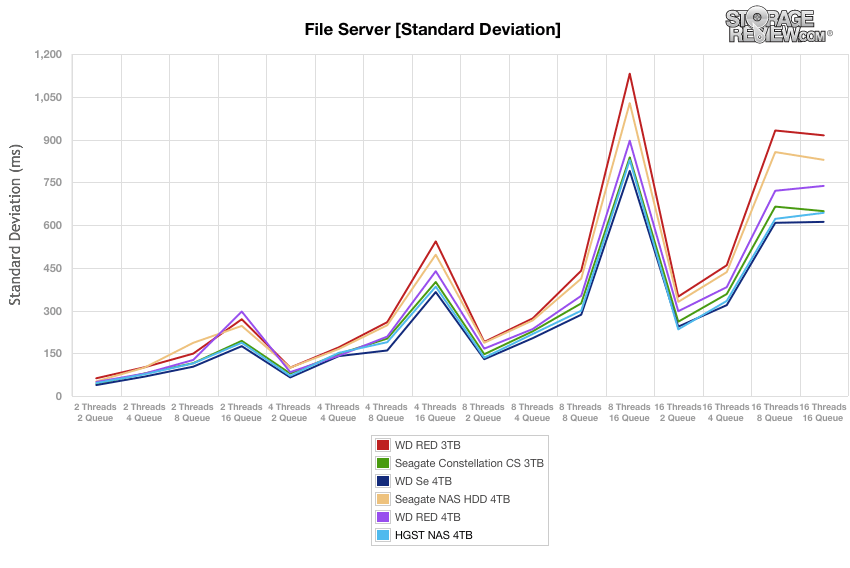 The synthetic webserver profile uses 100% read operations with a variety of transfer sizes. The Deskstar NAS clocks a second place overall throughput performance with 114IOPS at the top end of our webserver workload, just of the Constellation CS which topped out at 113IOPS. 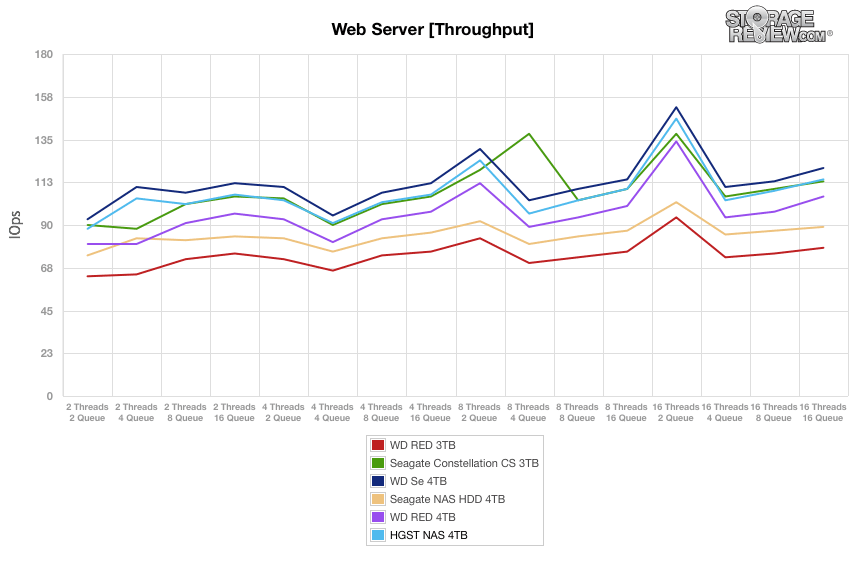 The average latency plot for our synthetic webserver profile continues the pattern of strong second and third place results for the HGST Deskstar NAS. 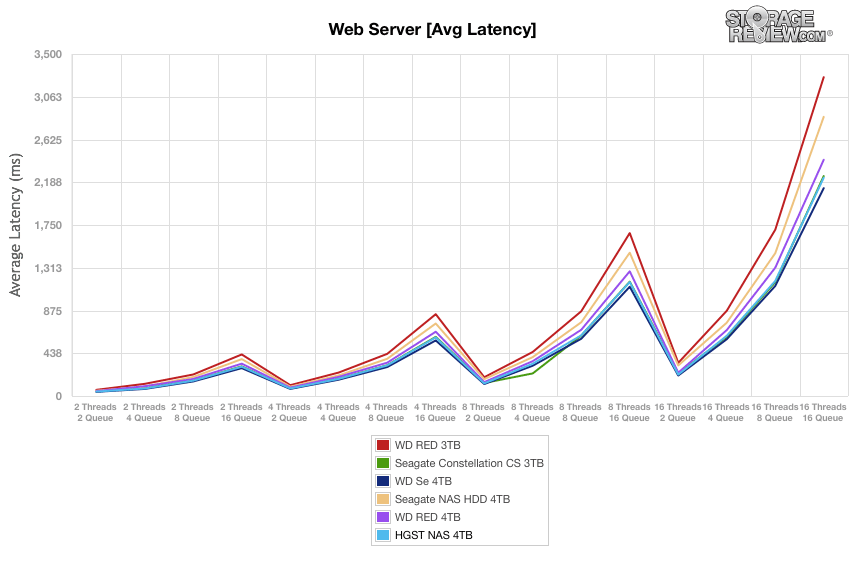 The Deskstar NAS experienced no noteworthy latency spikes throughout the range of workloads we presented it with during the webserver profile. 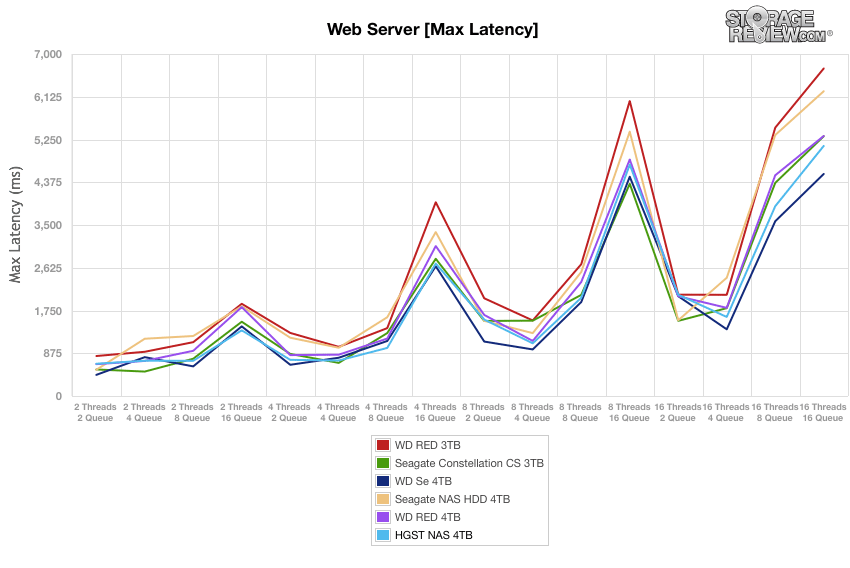 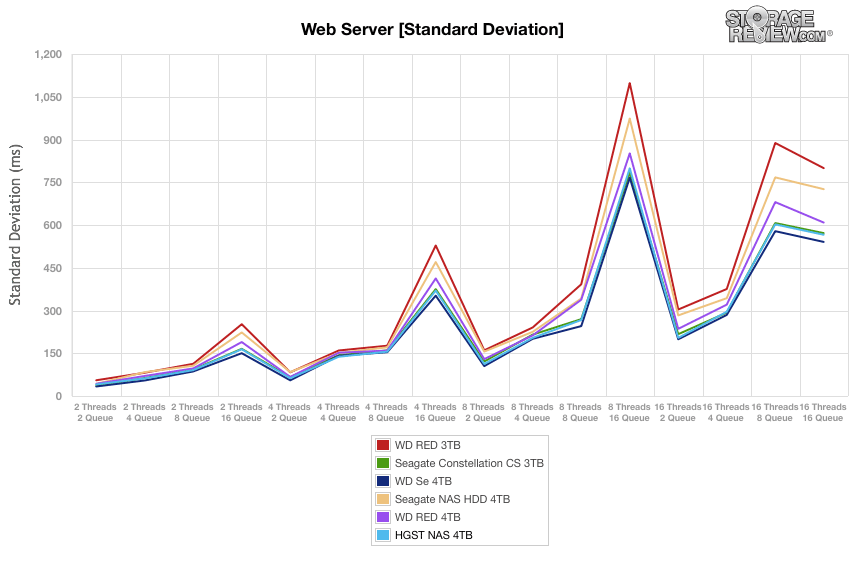 During our 4k CIFS benchmark, the Deskstar NAS experienced middle of the pack performance against the 7k HDDs, but came in on top of the 5k HDDs, with 534IOPS for read operations and a last-place 893IOPS for write operations.

Average latency results during the 4k CIFS benchmark again place the HGST Deskstar NAS in the middle of the pack for read operations and in last place for write operations.

Measuring the greatest latency spikes during the 4k CIFS benchmark continue to place the Deskstar NAS in the middle of the comparables for maximum read latency and at the top of the scale for maximum write latency.

Changing to a profile featuring sequential 8k transfers, the Deskstar NAS was much more competitive with 33,582IOPS throughput for 100% read operations and 22,921IOPS for write operations. 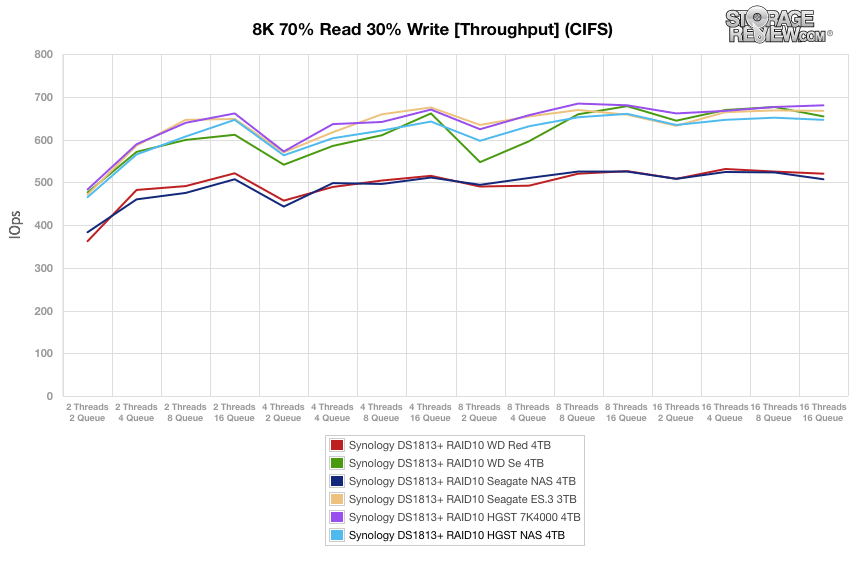 With network and the storage array accounting for the baseline average latency during the 8k 70/30 CIFS profile, there was little variation across members of the current generation of NAS HDDs and enterprise bulk storage hard drives. 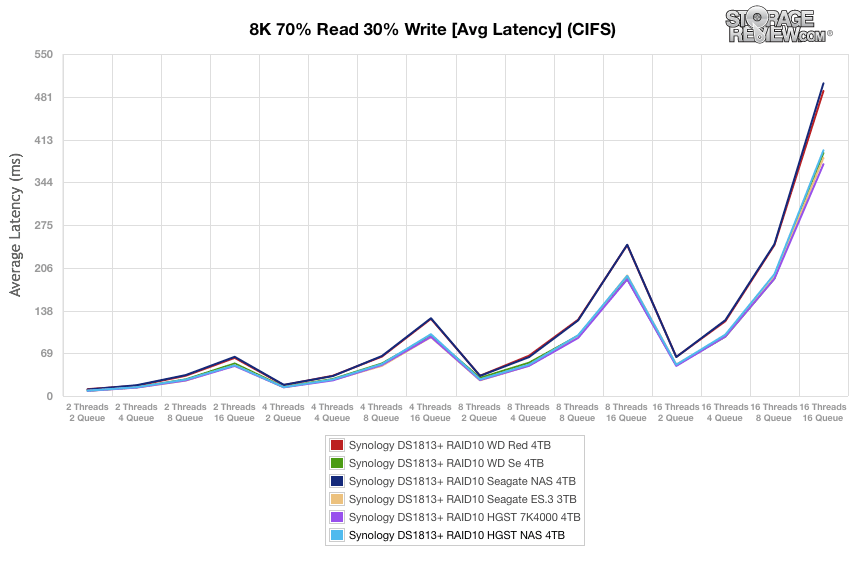 Maximum latency results during the 8k 70/30 CIFS benchmark reveal more about differences in performance between the comparables than the average latencies. The HGST Deskstar NAS has trouble with a queue depth of 8 in this profile regardless of the thread count, but the scale of the problem is relatively small. 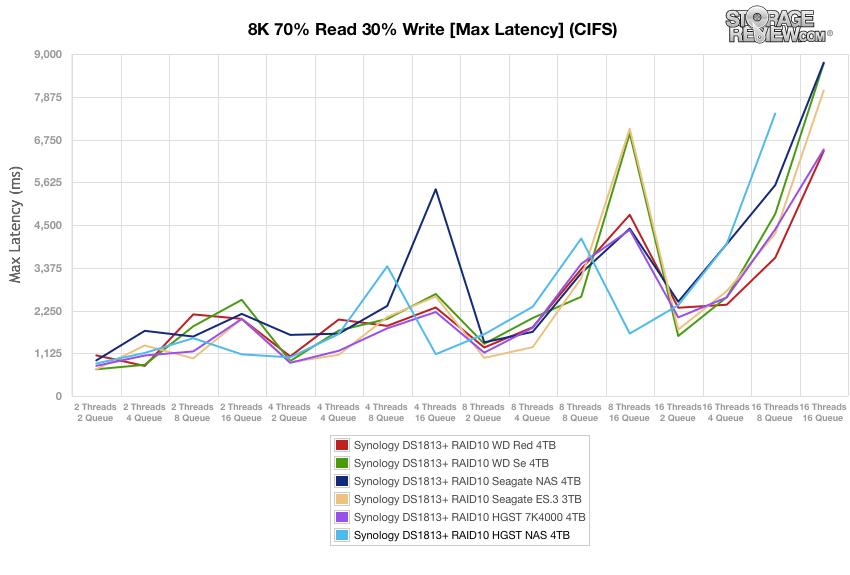 Standard deviation calculations for the 8k 70/30 CIFS benchmark show that the Deskstar NAS had some of the most consistent latency results among its class. 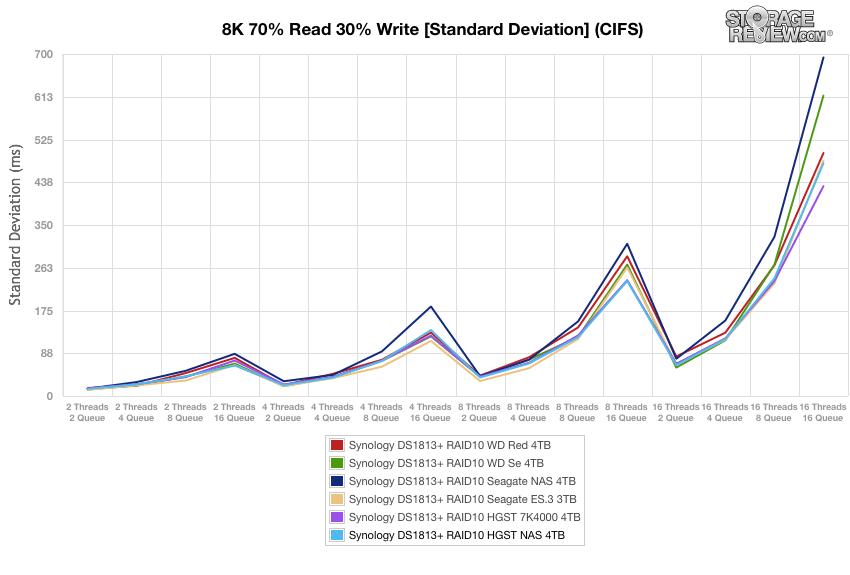 The final CIFS profile uses 128k transfers with 100% read and 100% write operations. The HGST Deskstar NAS hit read speeds of 329,962KB/s and write speeds of 245,706KB/s. Both scores are competitive but undistinguished among the comparable drives.

Switching our Synology DS1813+ over to the iSCSI protocol, the HGST Deskstar NAS attained 2,078 read IOPS and 986 write IOPS with 4k transfers. Both results place the Deskstar NAS at the middle-back of 7k comparable drives but in front of the 5k NAS products.

Average latency calculations during the 4k iSCSI benchmark show the Deskstar NAS at 128.16ms for read operations and 259.91ms for write operations, again in the middle of the pack.

Maximum recorded latency values during the 4k iSCSI benchmark place the Deskstar NAS hard drive in second place to the Seagate ES.3 at 1,074.5ms for read operations and 1,962.3ms for write operations.

With a mixed profile of 70% read operations and 30% write operations with 8k transfers across a range of thread and queue combinations, the Deskstar NAS outperformed the SMB NAS drive comparables but remained near the bottom of the high-capacity enterprise comparables. 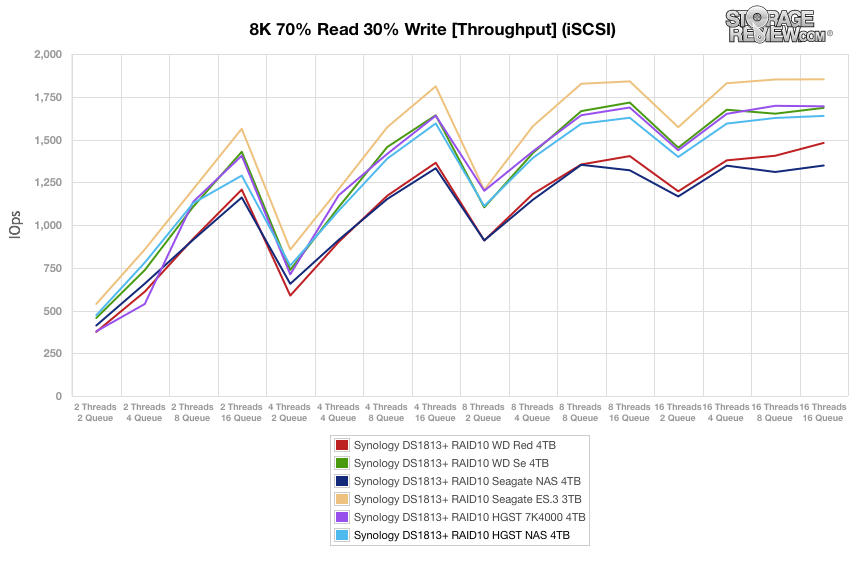 Average latency results for the 8k 70/30 iSCSI profile show no trouble spots for the Deskstar NAS. 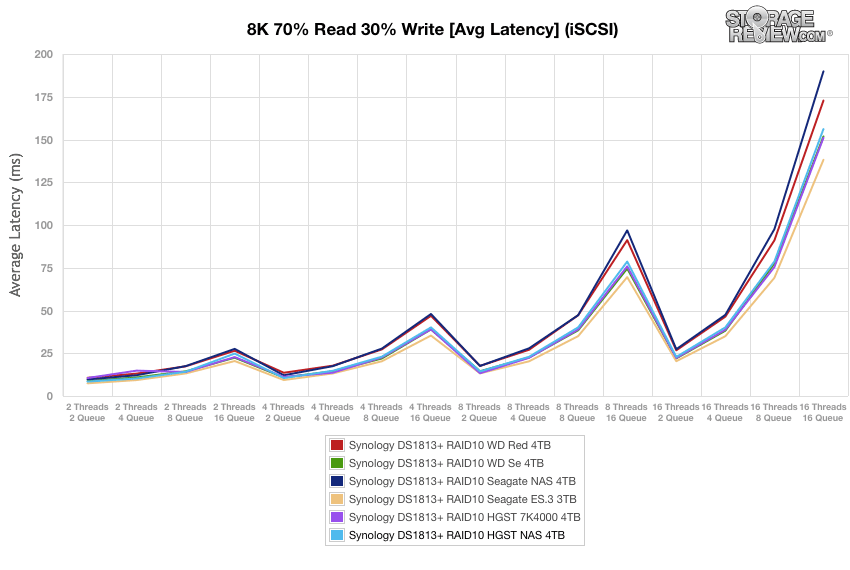 While the WD Se was able to achieve best-in-class maximum latency results during the 8k 70/30 iSCSI profile, the array composed of Deskstar NAS drives maintained an overall second-place. 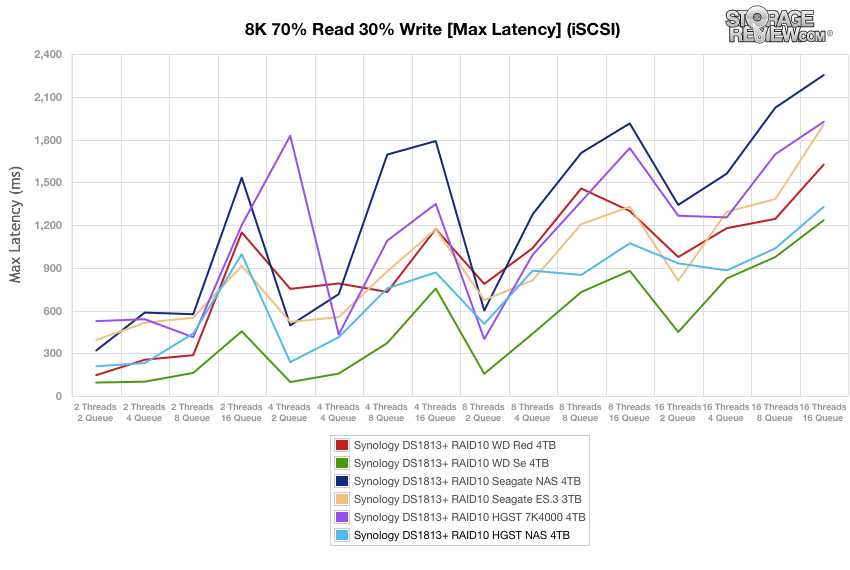 A plot of the 8k 70/30 iSCSI latency standard deviation results confirms that the HGST Deskstar NAS experienced no latency troubles that were masked in our other visualizations of the test 8k 70/30 iSCSI results. 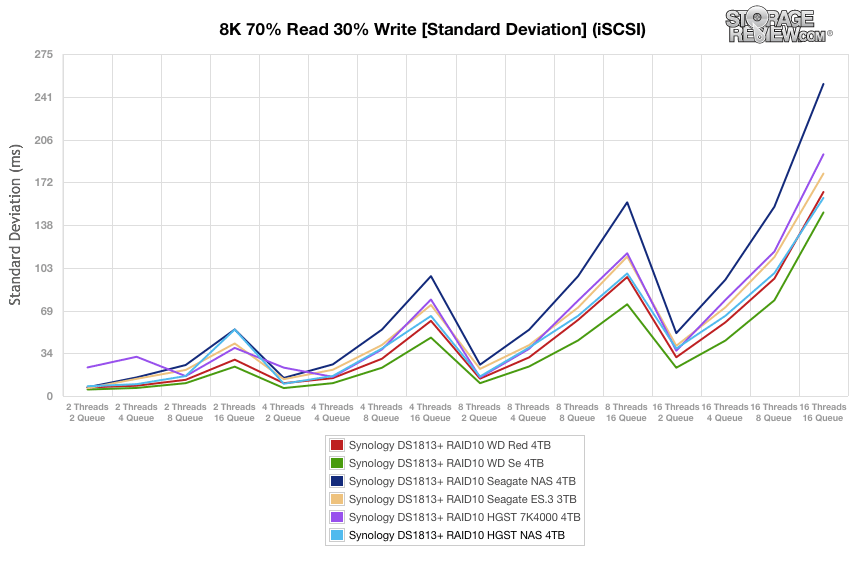 The new HGST Deskstar NAS represents the engineering efforts of a leading manufacturer on top of a proven hardware platform. HGST's effort in the NAS space is pretty unique in that it's 7K vs. 5K from the other vendors. The drive also includes a vibration sensor which is also novel in this space, letting the drive play in rack-mount applications where the others do not. Despite the Deskstar categorization by HGST, the NAS drive is arguably more of a light enterprise drive, though with the specced MTBF and shorter warranty, it does not earn an enterprise distinction. What is also interesting is that HGST just floated the NAS drive out into the market with little to no fanfare or details. HGST is definitely behind the curve for duty-specific drives, perhaps their NAS drive iteration is differentiated with the higher spec to help it stand out from Seagate and their counterparts at WD.

Compared to existing NAS HDD offerings which have up until this point been 5k RPM, the HGST Deskstar NAS performed quite well when it came to multi-user access as seen in our random workload profiles. In many cases it came in towards the middle or bottom of the enterprise pack, which is quite good considering those cost a great deal more per drive. We did note that in sequential workloads, especially iSCSI, speeds suffered compared to other 5k and 7k comparables. This wasn't the case for CIFS testing where it generally performed near the top of the pack in both 8k and 128k transfers. Overall the HGST NAS HDD provided very strong performance, trailing on the heels of the enterprise HDD offers but at a more consumer friendly price.

The HGST Deskstar NAS largely outperforms other NAS-specific hard drive offerings for the sub 8-bay NAS market. HGST has also endowed the drive with a few distinctive features such as a vibration sensor that some customers will find important for use in rack-mount scenarios that other NAS HDDs are excluded from.