Back in September 2012, HGST first announced their Helium Hard Drive Platform. The Helium drives began to ship the following year in November and as of last month, HGST has deployed over a million drives. We had previously reviewed the Ultrastar He6 6TB helium drive. Now HGST has taken their helium technology and expanded capacity even further with the Ultrastar Helium He8 8TB Enterprise Hard Drive. The He8 is available in either SAS 12Gb/s or SATA 6Gb/s interface. The drives offer a spindle speed of 7,200RPM, on disk buffer of 128MB and drive sustained throughput of 205MB/s.

Back in September 2012, HGST first announced their Helium Hard Drive Platform. The Helium drives began to ship the following year in November and as of last month, HGST has deployed over a million drives. We had previously reviewed the Ultrastar He6 6TB helium drive. Now HGST has taken their helium technology and expanded capacity even further with the Ultrastar Helium He8 8TB Enterprise Hard Drive. The He8 is available in either SAS 12Gb/s or SATA 6Gb/s interface. The drives offer a spindle speed of 7,200RPM, on disk buffer of 128MB and drive sustained throughput of 205MB/s. 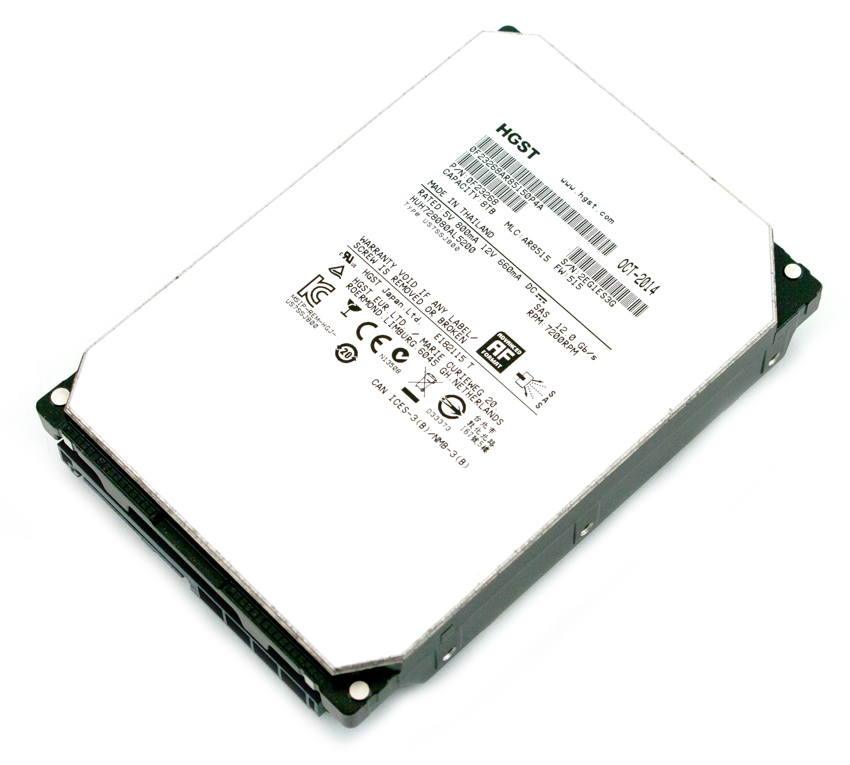 As we stated previously, the drive is sealed and filled with helium to reduce friction. With fewer disturbances inside the drive, more platters can fit and less power is required. According to HGST, when comparing the He8 to a 6TB air drive you’ll see 23% lower idle power and 44% better Watts/TB. Not only that, the newest helium drives bump the capacity up to 8TB (33% more than 6TB drives) and it has more use cases than Shingled Magnetic Recording drives. The main area of focus for He8 sales would be enterprise and datacenters where density and capacity are paramount and weighed against TCO.

The HGST Ultrastar Helium He8 8TB Enterprise Hard Drive comes with a 5-year warranty and has a street price of $600.

The Ultrastar He8 looks pretty much identical to the He6, the difference being the indication of a higher capacity and weighing slightly more. He8 is a hermetically sealed helium-filled HDD enabling HGST’s 7Stac disk design to reach 8TB in capacity, making the industry’s highest capacity PMR HDD with best-in-class TCO for cloud storage as well as massive scale-out environments, disk-to-disk backup, and replicated or RAID environments. The front of the drives has a sticker with basic information on the drive, including the product name, capacity and HGST logo. 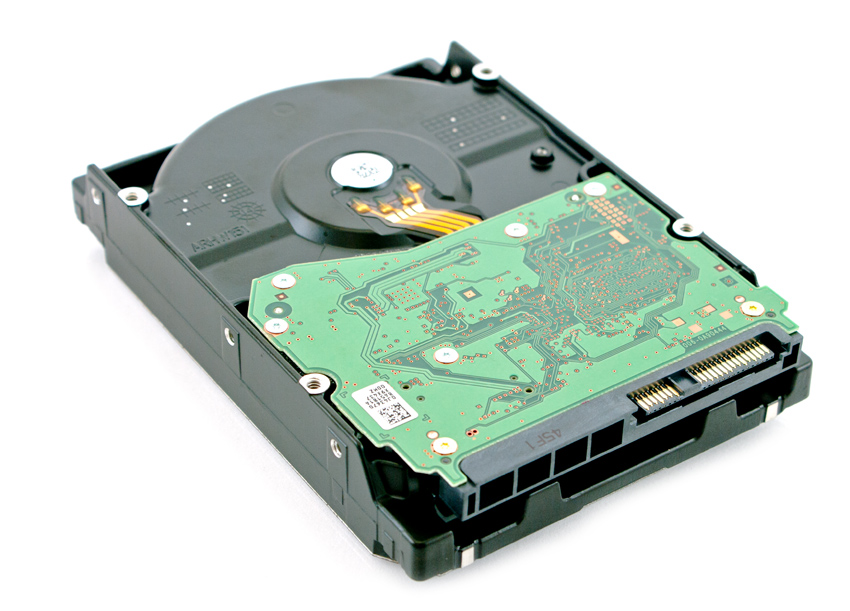 Because Helium is a sealed drive technology, the packaging of the drive is different. While most hard drives are components assembled inside a shell that is screwed together, the Helium drives have to be fused together to seal the helium in. 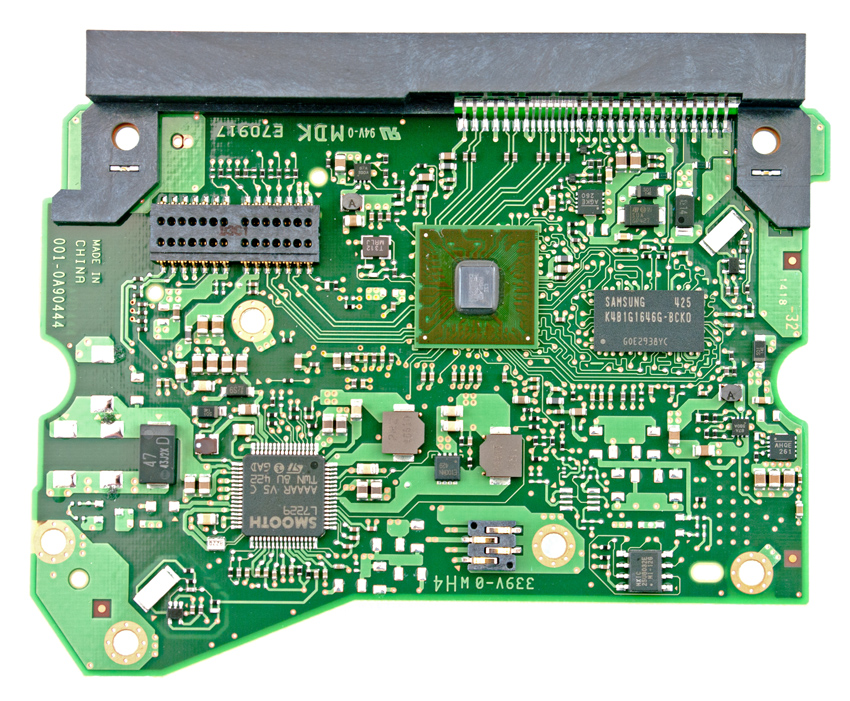 The He8 is much quieter than its air-filled brethren, it is as quiet as the He6. Besides being quieter the drive also uses substantially less power than the older 5-platter 7K4000.

In the enterprise market, there is a huge difference between how products claim to perform on paper and how they perform in a live production environment. We understand the importance of evaluating storage as a component of larger systems, most importantly how responsive storage is when interacting with key enterprise applications. To this end, we’ve rolled out application tests including our proprietary MySQL performance via SysBench and SQL Server performance via Benchmark Factory.

In our average transactions per second benchmark, the He8 started off behind the other and finished in the middle of the pack with 280.77 TPS while Seagate Enterprise Capacity hit 336.28 TPS. 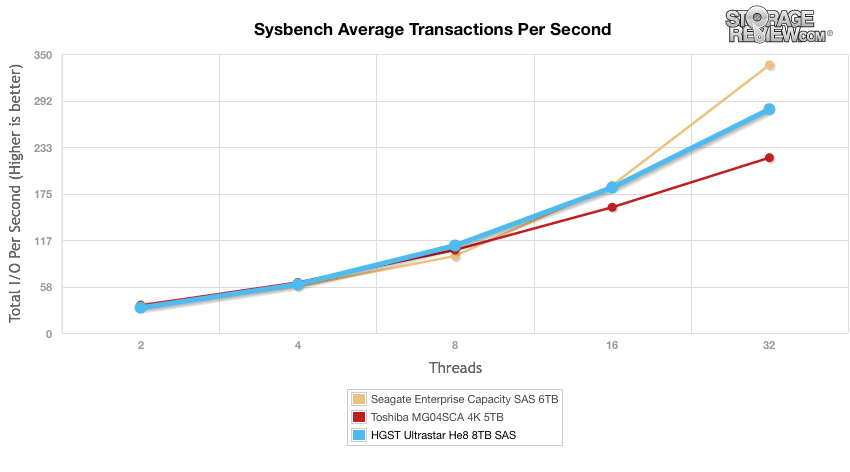 Measuring average latency in our Sysbench MySQL test told a similar story, with the He8 starting off behind only to wind up in the middle behind the Seagate Enterprise once again. The He8 topped out with an average latency of 113.97ms. 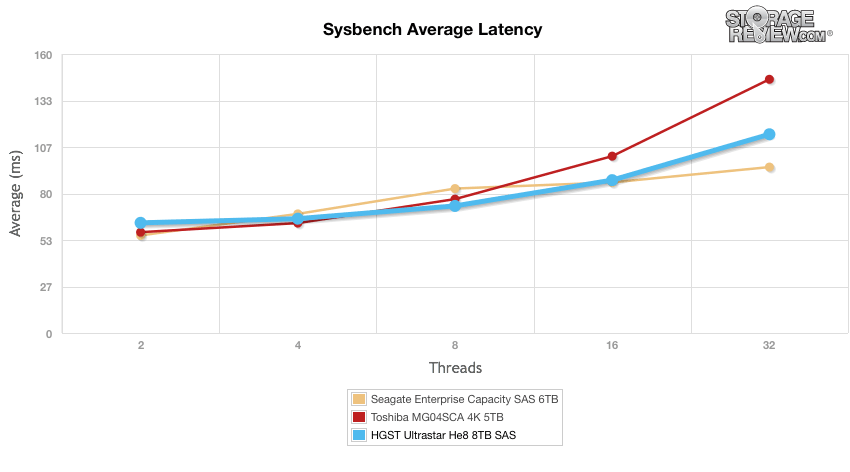 In terms of our worst-case MySQL latency scenario (99th percentile latency), the He8 again finished in the middle however it performed better than the MG04SCA throughout. 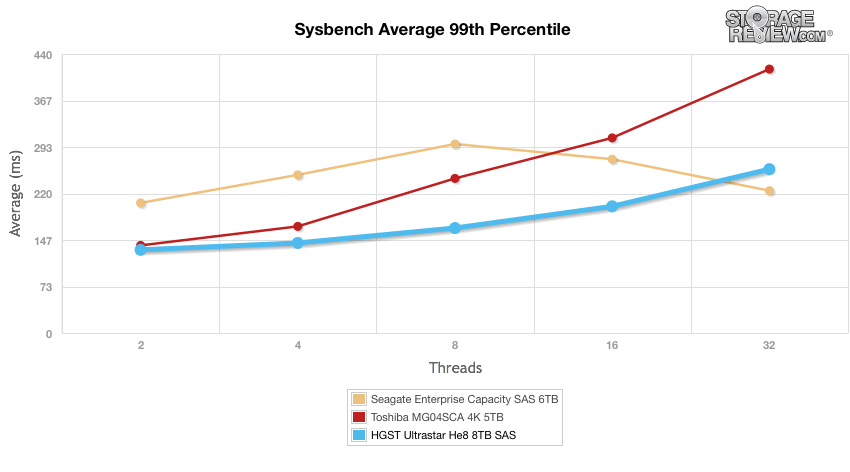 Our next database test covers performance in Microsoft’s SQL Server environment that leverages a 333GB (1,500 scale) SQL Server database and measures the transactional performance and latency with a 15,000 VU Load.

As with the Sysbench test, the results were very similar as far as placement in performance. The He8 placed second again in transactions per second with a score of 2873.4 TPS. The Seagate Enterprise continued to be the top performer with 3001.5 TPS.

Latency showed us more of the same with the He8 trailing behind the Seagate a bit more with a latency of 477ms to Seagate’s 255ms.

Prior to initiating each of the fio synthetic benchmarks, our lab preconditions the device into steady-state under a heavy load of 16 threads with an outstanding queue of 16 per thread. Then the storage is tested in set intervals with multiple thread/queue depth profiles to show performance under light and heavy usage.Preconditioning and Primary Steady-State Tests:

In our 100% 4K random read and write test, the He8 top the charts in write performance with 314 IOPS well ahead of the other drives. On the flip side, the He8 came in last in read performance with only 136 IOPS, about a hundred under the next closest drive in performance.

Looking at average latency we again see the He8 as the top performer in write speeds with 814.66ms, and the worst performer, by far, in read speeds with 1,867.99ms.

Standard deviation showed the He8 landing second in write speed with 163.85ms and third in read speed with 505.18ms.

Compared to the fixed 16 thread, 16 queue max workload we performed in the 100% 4k write test, our mixed workload profiles scale the performance across a wide range of thread/queue combinations. In these tests, we span workload intensity from 2 threads and 2 queue up to 16 threads and 16 queue. In throughput, the He8 struggled near the bottom of the pack. The other drives tested beat it out more or less throughout the test with the He6 dropping down below the He8 a few times. The He8 peaked at 203 IOPS. 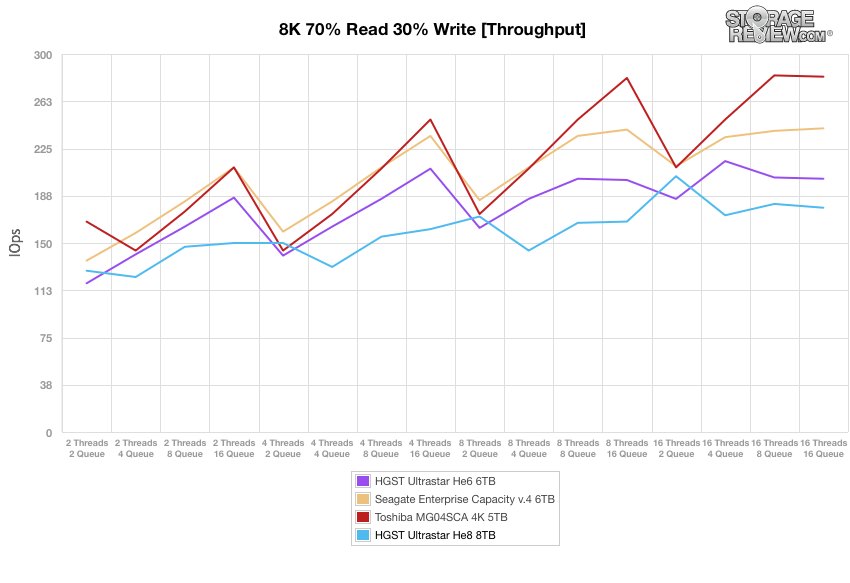 In our average latency benchmark, the He8 started out near and then stayed at the bottom of the pack. 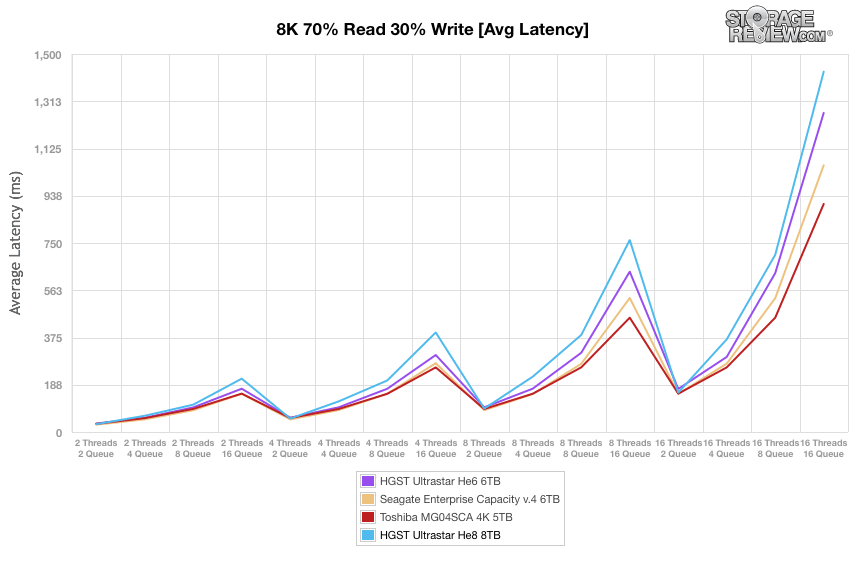 With max latency, there were times where the He8 had lower overall latencies but near the end it was again in last place. 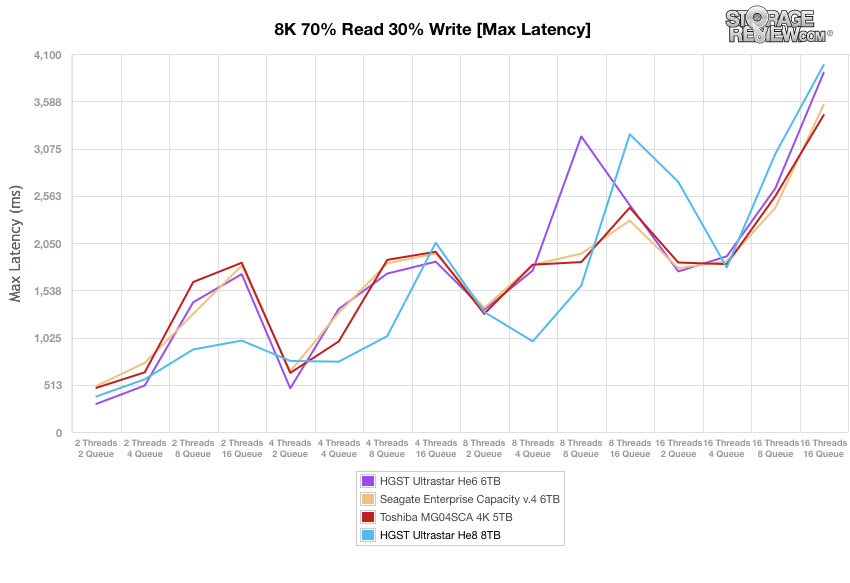 In standard deviation, the He8 ran more in line with the Seagate and performed better than the He6 and the MG04SCA. 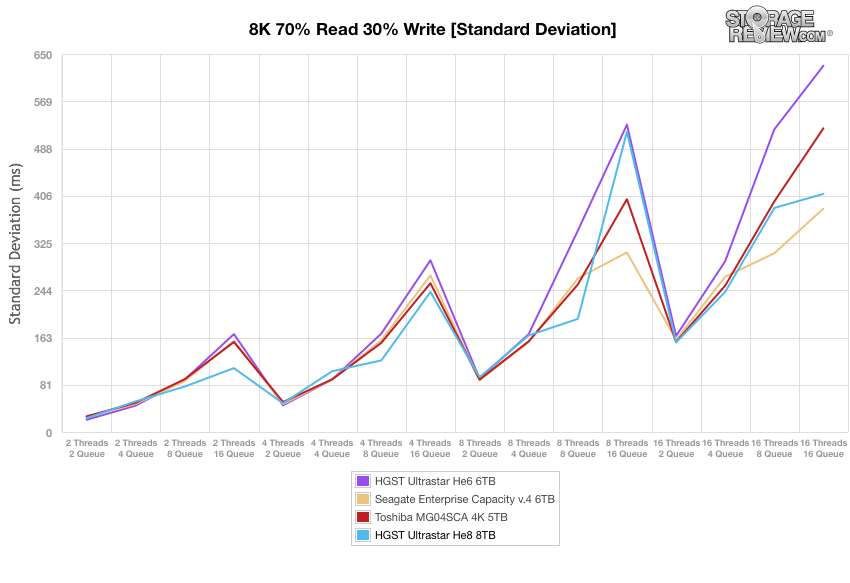 Our Enterprise Synthetic Workload 128K test is a large block sequential test that shows the highest sequential transfer speed for a platter drive. When looking at 128K performance of 100% write and 100% read activity, while the He8 wasn’t the top performer, it did run about in line with the top performing drives. The He8 had read and write speeds of just under 202MB/s.

The HGST Ultrastar Helium He8 8TB Enterprise Hard Drive is a higher capacity HDD than their previous version. The He8 comes in both SAS and SATA interfaces, 7200 RPM spindle speeds, and a disk buffer of 128MB. HGST says that the He8 provides 33% more capacity, while using 23% lower idler power, and providing 44% better Watts/TB than 6TB air HDDs. Unlike SMR drives, the He8 can be used in most enterprise applications without the restrictions of SMR. In our initial review of the 6TB model we were hesitant to recommend the helium drives as the technology was relatively new. However HGST has now deployed more than million helium drives proving out their technology and has committed to using sealed drive technology exclusively for their capacity 3.5″ line going forward.

Looking at performance, there aren’t competitive 8TB drives to make an apple-to-apple comparison to (the Seagate Archive is an 8TB drive but uses SMR technology). Instead we compared the He8 to its 6TB sibling along with a 5TB and a 6TB enterprise HDD. The He8 performed well in our Application Performance Analysis coming in second in all the tests. In our synthetic workloads, the He8 had the highest write throughput on or 4k benchmarks with 314 IOPS and the lowest average latency with 814.66ms. In our 8k 70%Read/30%Write the He8 ran near the bottom of the pack even trailing its predecessor. In our large block 128k test we saw speeds of just under 202MB/s in both read and write which is about in line with what HGST claims. Overall its not a highest performer compared to others in the bulk storage tier but the trade off is that user gains 33% capacity as well as power advantages that the helium-filled sealed design offers.

In the end, the He8 again shows off HGST’s design prowess when it comes to integrating leading-edge technology. This sealed platform is being further leveraged in a 10TB HDD, albeit in a host managed SMR form. Regardless, HGST gets to claim the crown of fastest 8TB drive on the market, and in use cases where capacity and performance reign supreme, the He8 will win over many, despite the pricing premium per TB. Even though it’s not SMR, the drive still has limitations in deployment, none of which are its fault. RAID environments may still be challenging due to rebuild times and arrays that have large metadata tables to manage, probably won’t immediately transition to these or any other high-capacity drives. But for those using storage stacks that can take advantage of the huge capacity bump and don’t want to take the performance hit of the competing SMR drives, the He8 will should be an excellent driver with an eye toward more PB-scale deployments.

HGST Ultrastar Helium He8 Enterprise Hard Drive is an 8TB HDD that is available in both SAS and SATA interfaces. With the He8, users get a bump in capacity along with a drop in power consumption leading to a lower total cost of ownership and the fastest throughput at the 8TB capacity point.

HGST Ultrastar Helium He8 at Amazon