HighPoint has released their latest SSD caching effort, the RocketCache 3240X8. The RocketCache is a PCIe hardware and software combination that is designed to leverage anywhere from one to three low capacity SSDs as a high speed cache in front of hard drive based bulk storage array. While there are plenty of client caching solutions that use software and a single SSD to deliver improved performance, the RocketCache solution is unique in that it gives desktop users a great deal of flexibility, with several iterations possible from the four supported drives.

HighPoint has released their latest SSD caching effort, the RocketCache 3240X8. The RocketCache is a PCIe hardware and software combination that is designed to leverage anywhere from one to three low capacity SSDs as a high speed cache in front of hard drive based bulk storage array. While there are plenty of client caching solutions that use software and a single SSD to deliver improved performance, the RocketCache solution is unique in that it gives desktop users a great deal of flexibility, with several iterations possible from the four supported drives.

The breakdown of cache options range from a single SSD to three SSDs for caching:

HighPoint offers the RocketCache in two variations, the 3240X8 and 3244X8. The 3240X8 is setup for an internal disk array using a SFF-8087 connection, whereas the 3244X8 is designed for external devices connected through a SFF-8088 interface. Our review model is the HighPoint RocketCache 3240X8 PCI-Express 2.0 x8 SATA/SAS controller card that carries a street price of $179.99. 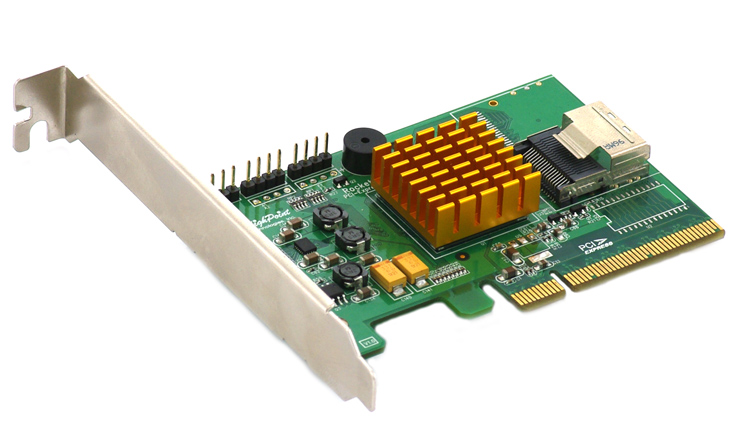 The HighPoint RocketCache 3240X8 represents a unique caching alternative compared to some of the consumer-targeted solutions that have recently come to market. While products like the OCZ Synapse or OCZ RevoDrive Hybrid are tied to specific hardware, the RocketCache can use any off the shelf hard drives or SSDs. It also offers RAID protection for configurations setup with more than one hard drive. As a hardware solution, HighPoint was able to support up to four devices as well as offer higher performance in some areas compared to current caching products. 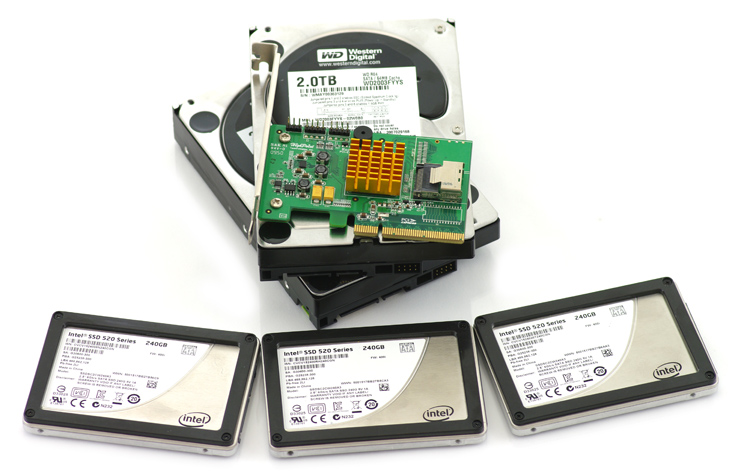 The HighPoint RocketCache is a rather compact RAID card, taking up a single PCIe slot in our consumer testing rig. The two most visible parts on the card are the orange heat-sink for the Marvell RAID controller and the mini-SAS SSF-8087 connection. 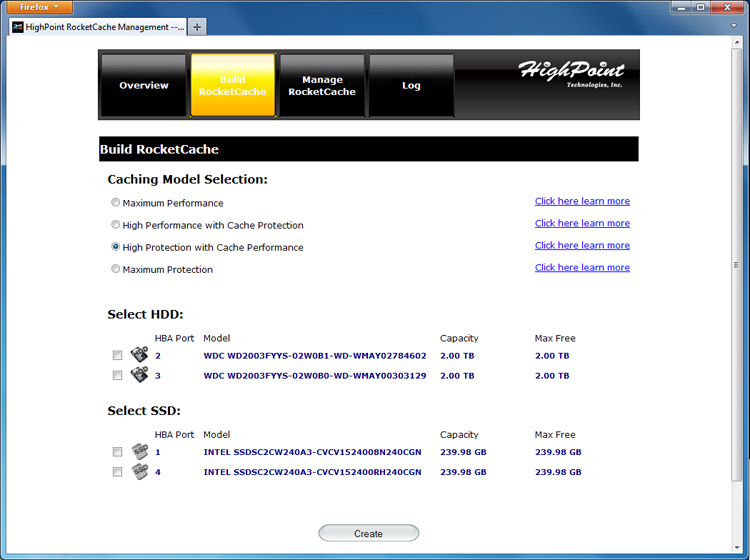 All configuration of the RocketCache hardware is handled through an easy to use web interface. With the drivers and interface software installed on your computer, you simply go to “localhost:7402” and enter the HighPoint configuration manager. From here you can monitor the status of the card, change settings, and create new cached storage arrays. We found the setup to be fairly simple to understand and well laid out for an enthusiast or professional user to navigate. 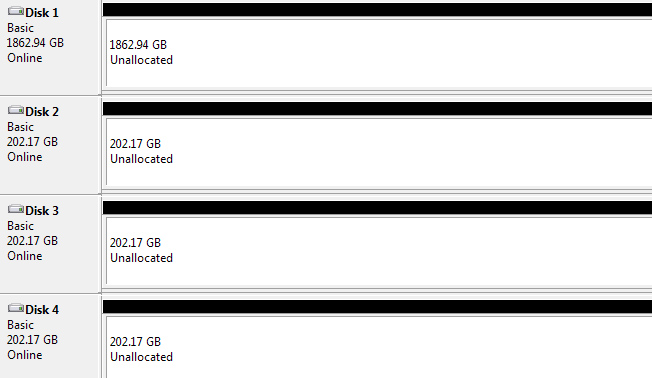 When configuring storage arrays, the card is pretty much compatible with hard drives and SSDs of any shape or size, with one limitation. Regardless of the SSD capacity, you are limited to 64GB of flash utilized for cache. This means a single caching SSD would use 64GB, a RAID0 of two SSDs would use 32GB from each, and a RAID0 of three SSDs would use about 21GB from each. Shown above is the RocketCache in Maximum Performance mode with one 2TB hard drive and three 240GB SSDs used as cache drives in RAID0. The leftover unused space on each SSD is 202.17GB (223.57 usable) HighPoint stated that the limitation was from RAM utilization from the host system, since it off-loads activity to the computer.

To show the HighPoint RocketCache at its full potential, we tested it using 2TB Western Digital RE4 hard drives for bulk storage and 240GB Intel SSD 520s for flash cache. All results show are fully-cached, meaning that depending on which SSD you choose for your array, performance will vary. This is especially true if you go with a smaller capacity “boot” SSD which generally offer slower sequential read and write speeds as well as slower random 4K transfer speeds. Each of our benchmark groups also have the uncached performance of the Western Digital RE4 and Intel SSD 520 by itself native on an Intel SATA controller, to show hard drive performance by itself and the SSD working outside of a caching platform.

Keeping with a large-block transfer out next test switches from sequential to random access transfers.

Since spinning platter media is not as fast with random access, the hard drive alone in this setting measured 66MB/s read and 84MB/s write, but when a SSD is added for caching, sped up to 458MB/s read and 428MB/s write. With three SSDs in RAID0 performance peaked at 1,110MB/s read and 1116MB/s write.

Our next test looks at random 4K transfer speeds at a queue depth of 1, which is easy for SSDs but difficult for hard drives with moving components.

With small-block random access the hard drive was only capable of read speeds measuring 0.33MB/s and write speeds of 0.81MB/s, but with a SSD helping that improved to 9.54MB/s read and 64.54MB/s write.

Our last synthetic benchmark for this review looks at random 4K write latency, which as function of write performance, gets lower as performance increases. The hard drive with spinning media and physical heads to move to different locations on the drive measured 4.8ms average, compared to 0.06ms when an SSD was added to help with caching abilities. 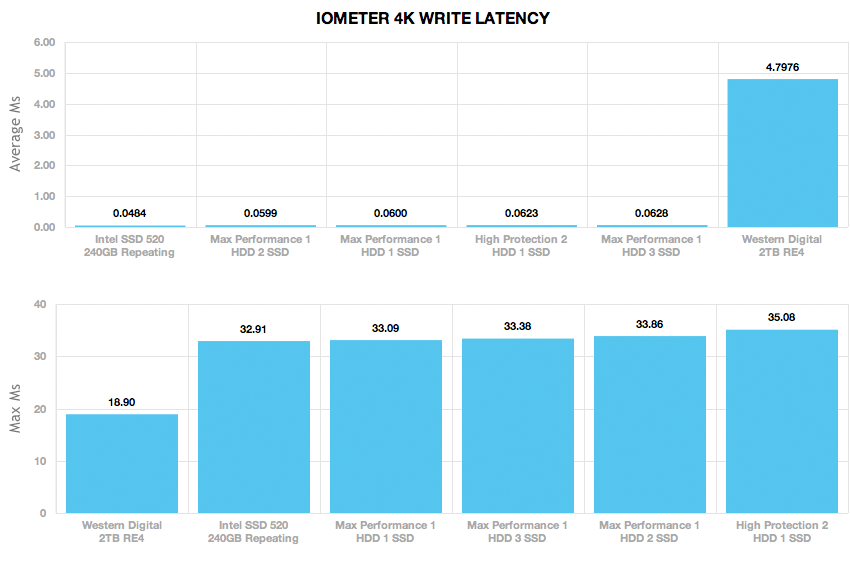 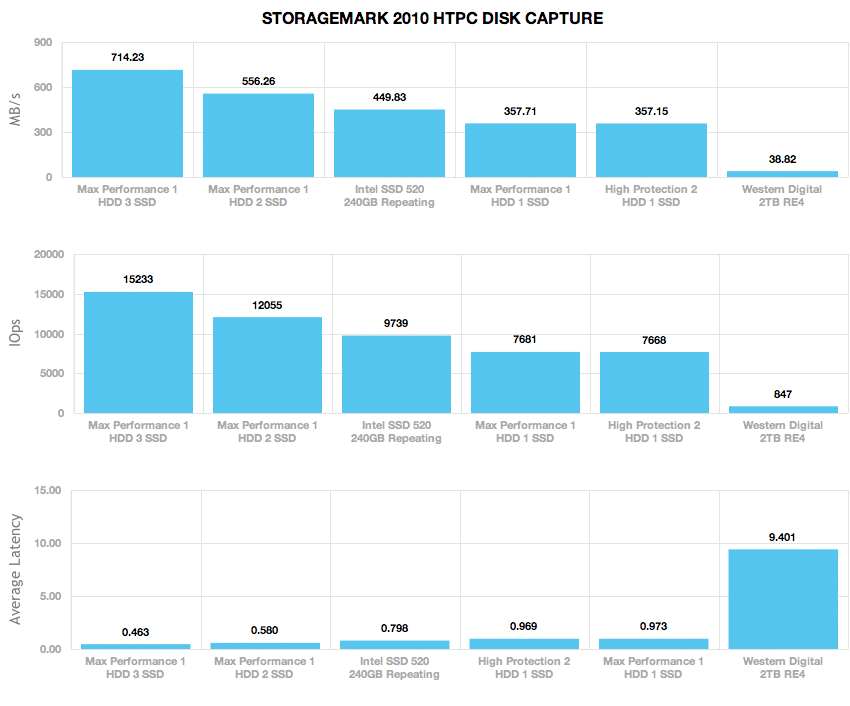 Without the help of a caching solution the 7200RPM hard drive measured an average speed of 38MB/s in our HTPC trace. With a single SSD added, performance improved to 357MB/s, scaling up to 714MB/s with three SSDs. 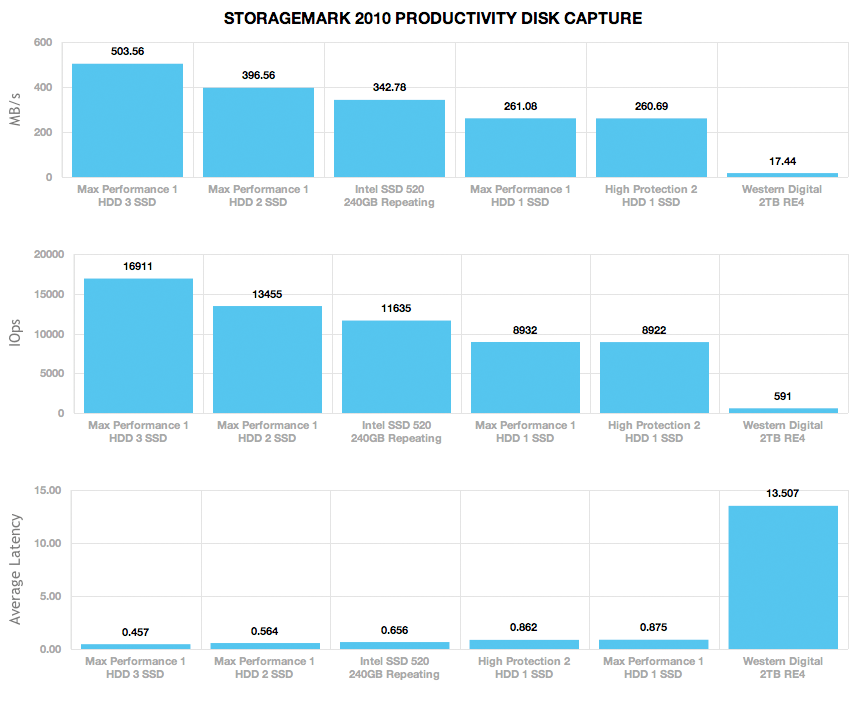 In a Productivity setting the hard drive had an average speed of 17MB/s, which improved to 261MB/s with a single SSD. This scaled up to 503MB/s average with three SSDs. 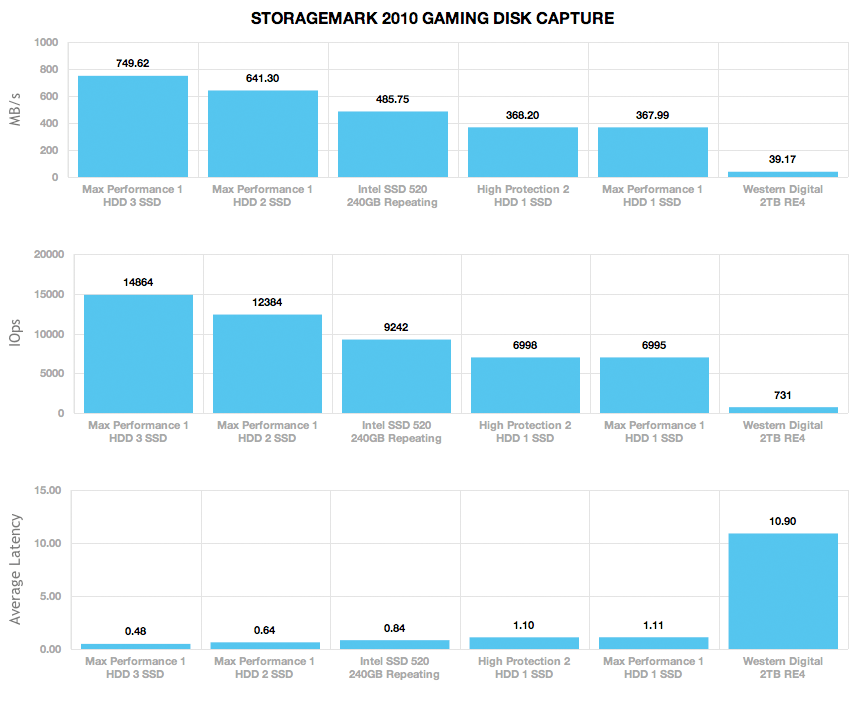 In a gaming scenario the hard drive averaged 39MB/s, compared to 370MB/s with a single SSD for caching, up to 749MB/s with three SSDs.

The HighPoint RocketCache 3240X8 is an interesting take on using SSDs as a cache within the desktop environment. With three SSDs layered together, the RocketCache can certainly generate some serious throughput. For certain audiences like video editing or large-scale HTPC file serving, the product is an ideal fit. Supporting multiple hard drives, as well as RAID1 protection, the RocketCache sets itself apart from other consumer solutions and slightly steps on the heels of enterprise solutions like LSI’s CacheCade Pro 2.0 which offer similar options but on a much, larger scale. Compared to vendor-locked consumer caching products like OCZ’s Synapse or RevoDrive Hybrid, the RocketCache puts some of the configurability into the customer’s hands and lets them decide which direction take it.

With all of the benefits though, there are some drawbacks to this solution. The first is this caching product is not bootable, meaning you still need to get an additional SSD if you want to get the benefit of faster response times through normal activities like faster boot times or quicker application load times. The second and perhaps more frustrating downside is the flash cache size limitation, set at 64GB. With the fastest SSDs generally being larger in size, to get the benefit of those speeds you have to work with leftover partitions if you didn’t want to waste expensive SSD capacity after setting up a cached solution. Another drawback to the cache limitation is you even run into leftover space if you just stick with popular 60/64GB SSDs to string together over RAID0. While it appears these problems are entirely software related, our understanding of it from HighPoint is future products might offer expanded options, but that they won’t be added to this card.

Overall the HighPoint RocketCache 3240X8 offers impressive features that can appeal to users in certain scenarios. If your main goal is to improve boot performance or OS interaction speeds, this product isn’t for you. If you want to substantially improve the speeds of a media serving array to a number of media players around a building or household, the RocketCache may be right up your alley.