The Hitachi Travelstar 7K500 is their fifth-generation 2.5" 7200RPM hard drive. Available in capacities ranging from 120-500GB, our review unit is the top-of-the-line 500GB version (HTS725050A9A364). The Travelstar 7K500 is widely regarded as the fastest notebook hard drive on the market; but our tests had something else to say.

The Hitachi Travelstar 7K500 is their fifth-generation 2.5" 7200RPM hard drive. Available in capacities ranging from 120-500GB, our review unit is the top-of-the-line 500GB version (HTS725050A9A364). The Travelstar 7K500 is widely regarded as the fastest notebook hard drive on the market; but our tests had something else to say. 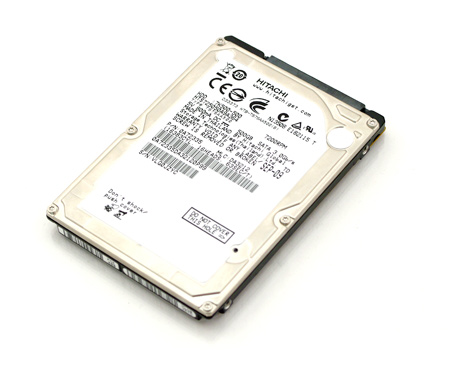 The full specifications are as follows:

The Hitachi 7K500 is quick to start, taking between three to four seconds to power on until ready.

We found it difficult to hear the drive running from more than two feet away in a notebook computer. While reading and writing to the drive, there are some soft audible clicks however they are non-intrusive and easily ignored. The person next to you is not likely to notice anything unless the room is silent. Compared to a Seagate 7200.4, the 7K500 has significantly less vibration and a noticeably lower ambient noise level.

Using HDTune we measured the idle temperature of the Travelstar 7K500 in our test HP notebook at 37*C, well below the drive’s rated maximum of 55*C. Under extended read/write load the temperature did not climb out of the lower 40*C range, which is low.

It is important to note that drive temperatures will be nearly completely dependent on the system they are installed in. The 7K500 remained cool in our notebook, however in systems with poor airflow the temperature will be higher.

Using our controlled test environment, we ran a variety of benchmarks on the 7K500 for this review. 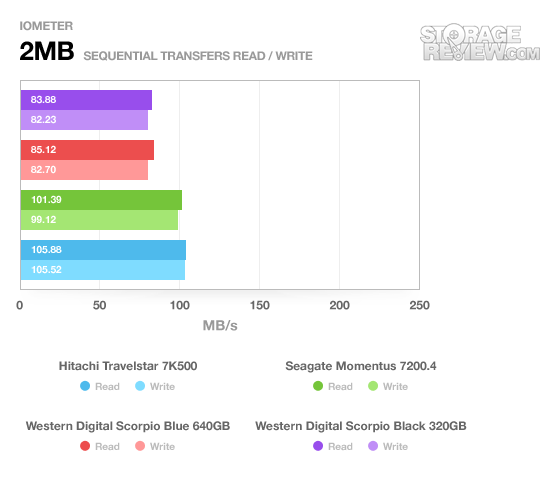 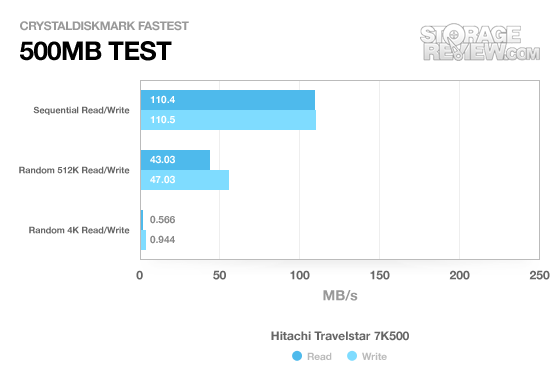 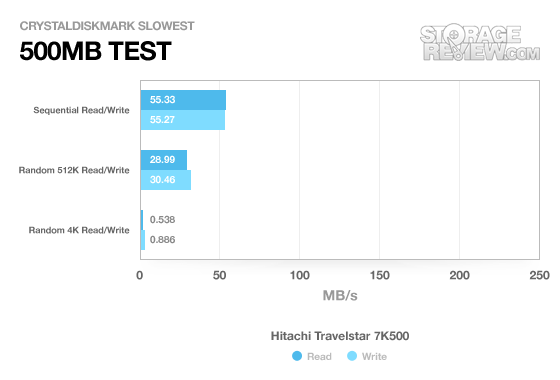 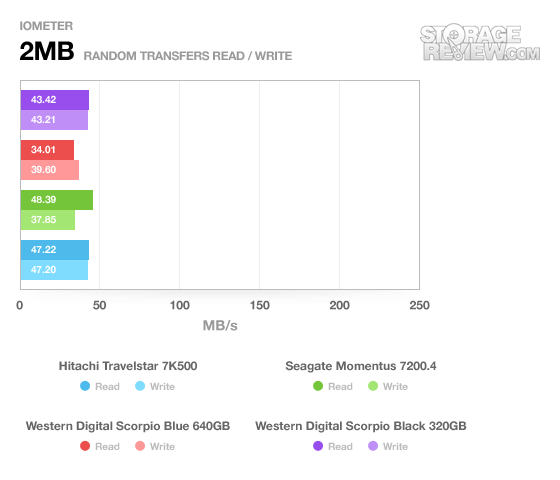 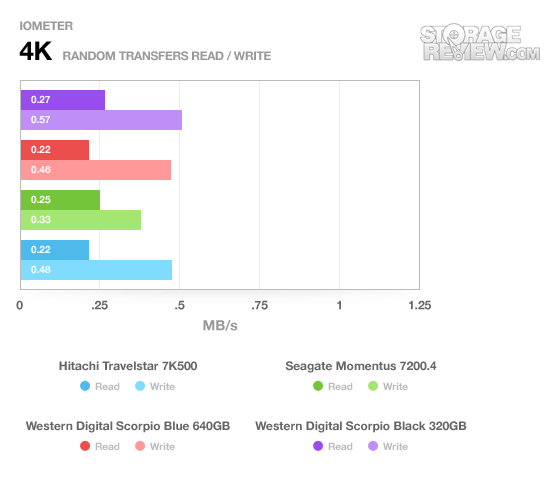 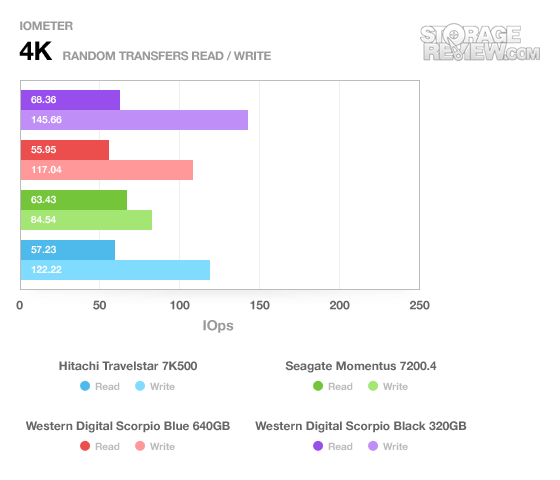 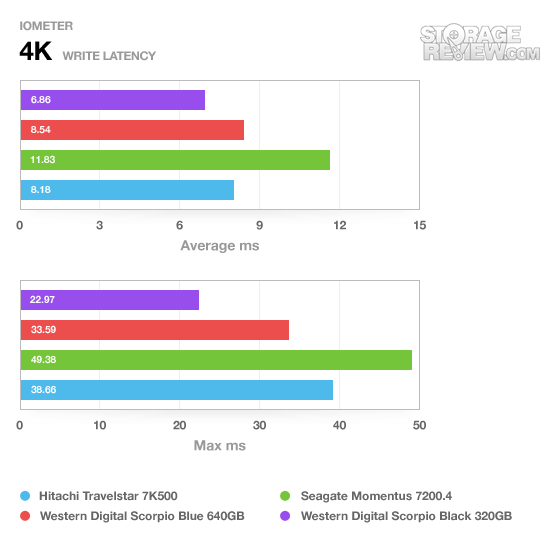 Random access benchmarks are a weak point for hard drives since they have moving parts. Positioning the heads over the platters in the hard disk to read and write data is a time consuming process. The 7K500 produces favorable results in both benchmarks; while it is the general leader in the 2MB test it falls behind the Scorpio Black in the 4K. For those deciding between the Seagate 7200.4 and 7K500, the two are generally even in read speeds however the Hitachi has considerably better write speeds in both benchmarks.

The sequential transfer tests simulate the hard drive reading and writing to a single (not random) part of the hard drive, which is why the transfer rate is so much higher than the random benchmarks. The Hitachi is the clear leader, just edging out the Seagate 7200.4 but leaving both Western Digital drives far behind.

The amount of Random Transfer IOPS (Input/output Operations per Second) is related to the random seek time of the hard drive; there is a relationship between the 4K Random Transfer IOPS write speeds and the 4K write latency. The 7K500 falls considerably behind the Scorpio Black though decimates the Seagate 7200.4, which is arguably the closest competitor. 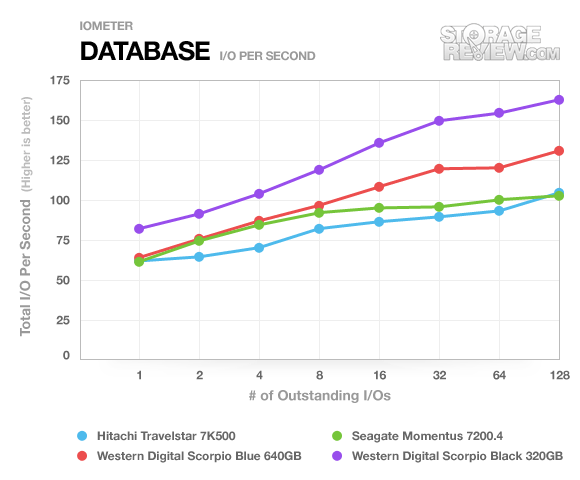 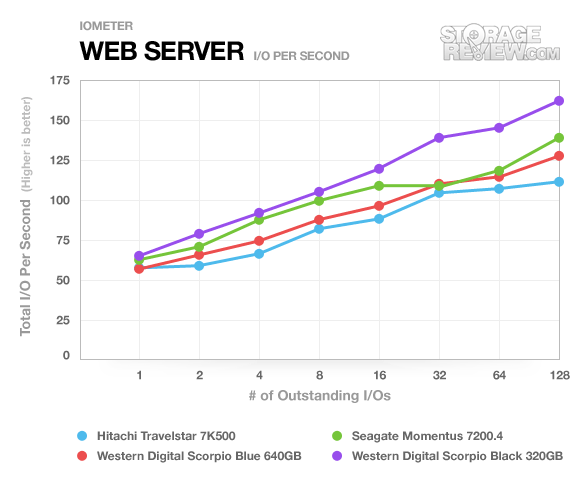 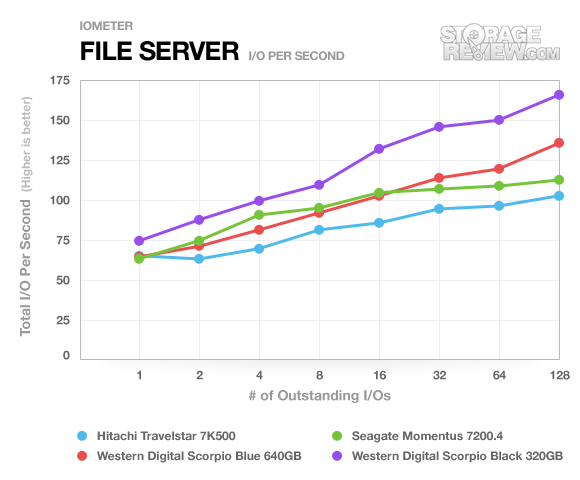 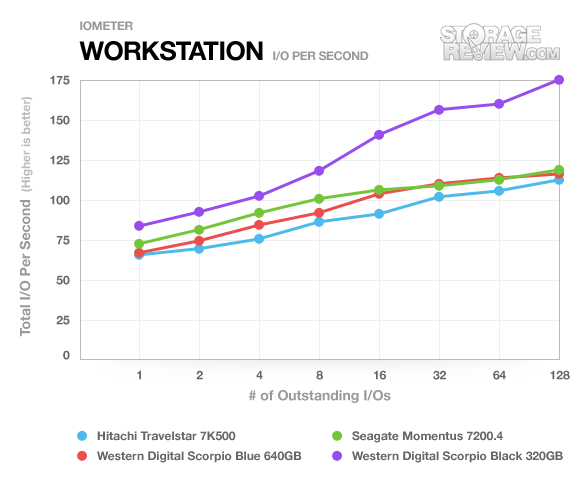 To test the 7K500’s performance under multi-user scenarios we use IOMeter with standard server profiles including Database, Workstation, Webserver, and File Server. The 7K500 produces some disappointingly low numbers in all of thes tests, lagging behind even the 5400RPM Scorpio Blue. The Seagate 7200.4 does noticeably better than the 7K500 but is completely outclassed by the Scorpio Black. 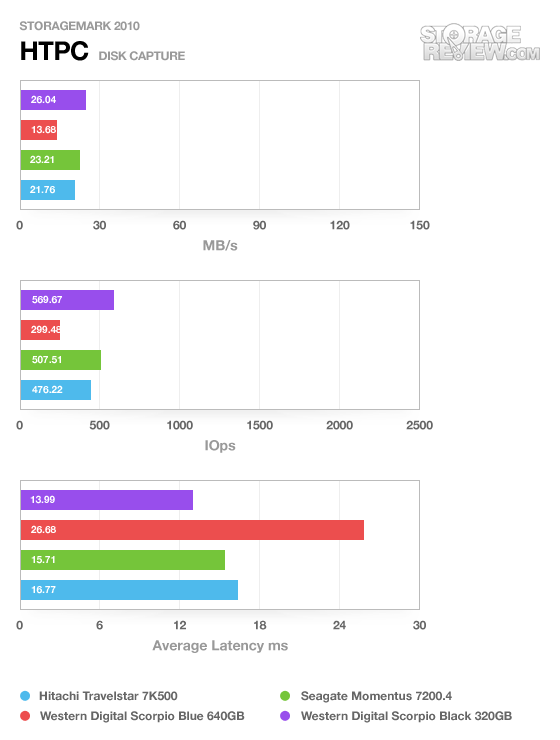 We ran our StorageMark 2010 HTPC profile on the 7K500 which includes: playing one 720P HD movie in Media Player Classic, one 480P SD movie playing in VLC, three movies downloading simultaneously through iTunes, and one 1080i HDTV stream being recorded through Windows Media Center over a 15 minute period.

This benchmark highlights the importance of a 7200RPM spindle speed in read/write intensive applications; the 5400RPM Scorpio Blue lags behind all of the other drives. The Travelstar 7K500 edges out the Seagate Momentus 7200.4 but again cannot match the Scorpio Black for pure performance.

Compared to its nearest competitor, the Seagate 7200.4, the Hitachi boasts lower numbers across the line to the tune of 5 – 10%. While unlikely to have a large impact on battery life, the 7K500 is nevertheless the more efficient drive, and does it while enjoying better performance as well. 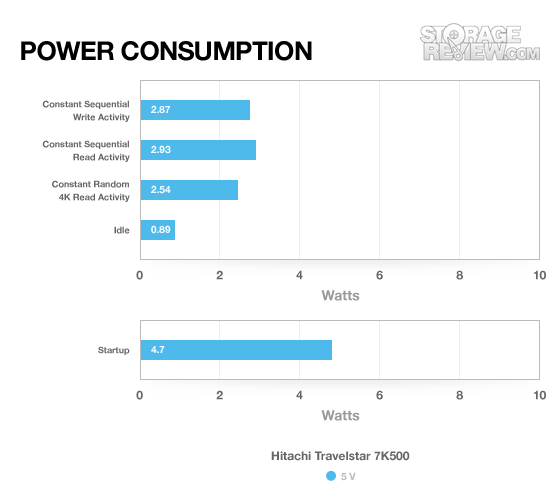 The Hitachi Travelstar 7K500 has a three-year limited warranty, valid if the drive was purchased from an authorized Hitachi dealer for normal use. If customers have trouble with the drive, their recourse is to contact Hitachi via phone or email.  If an RMA is arranged the customer pays for the shipping to the service center and Hitachi pays for the shipping back. The warranty is owner-independent since the warranty period is determined by the drive’s serial number.

Our review of the Hitachi Travelstar 7K500 shows the hard drive to be an impressive choice in the 2.5” notebook drive class. Contrary to popular opinion though, the 7K500 is actually not the fastest notebook drive on the market – the Western Digital Scorpio Black 320GB still remains top dog two years after release. It’s not even the fastest 500GB notebook hard drive, the Seagate Momentus 7200.4 retains that title in most cases.

For those shopping for a 500GB drive without any compromises on storage capacity the Seagate Momentus 7200.4 is still the winner. However, if you can take a small capacity hit, the 320GB Western Digital Scorpio Black will still provide the best performance in a notebook hard drive.