Western Digital’s Caviar Black hard drive series has grown to be synonymous with performance and speed in the consumer desktop space. The newest and highest capacity Caviar Black is a 3.5” 2TB 7200RPM model with 500GB platters and other Western Digital goodies like dual processors, dual actuators and technologies to optimize the drive for power consumption, minimal vibration and less wear to the recording head. Do all these features make for the best consumer-class hard drive? Read the full review to find out.

Western Digital’s Caviar Black hard drive series has grown to be synonymous with performance and speed in the consumer desktop space. The newest and highest capacity Caviar Black is a 3.5” 2TB 7200RPM model with 500GB platters and other Western Digital goodies like dual processors, dual actuators and technologies to optimize the drive for power consumption, minimal vibration and less wear to the recording head. Do all these features make for the best consumer-class hard drive? Read the full review to find out. 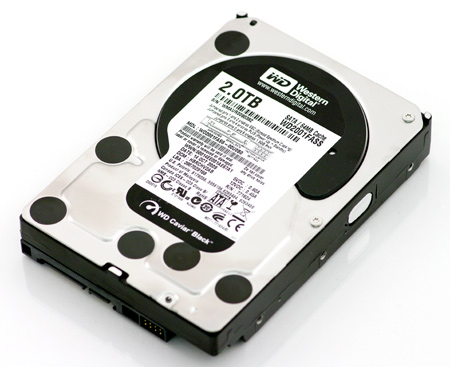 Consumer hard drives tend to have a consistent look unless they are a boutique model like the VelociRaptor, which houses a 2.5” enterprise drive in a massive heatsink. Western Digital adds a touch of flair to the Caviar Black with clean black stickers covering all of the flush-mount screws on the top of the drive. Might not be as cool as the old plastic windows that some drives offered, but it’s something! 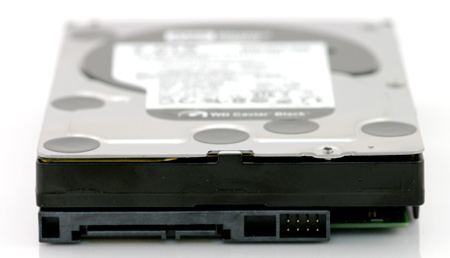 The Western Digital Caviar Black is constructed in a manner which places the heat-producing components in contact with the body of the drive. This allows things like the controller, RAM, and motor driver to shed heat into a heatsink instead of just the free air. Western Digital also makes use of a foam pad placed in between the drive and circuit board to help absorb vibration. 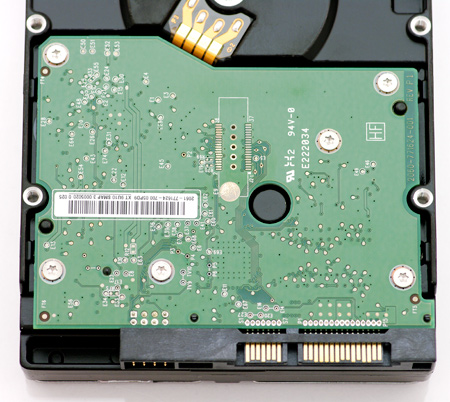 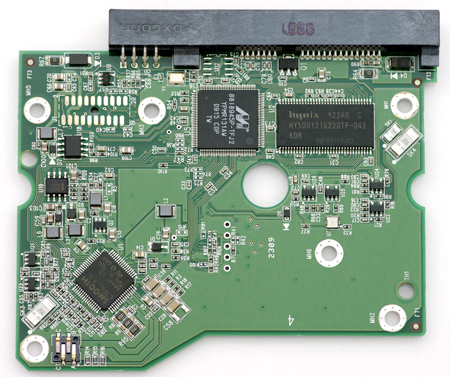 We put the 2TB Western Digital Caviar Black head-to-head with the 2TB Seagate Constellation and 2TB Western Digital RE4. Our first test is a large 2MB sequential transfer to see how well the drive might perform copying large individual files and more importantly see how close the performance comes to the manufacturers sustained transfer claim.

The 2TB Caviar Black has a 138MB/s transfer speed listed on its technical sheet. As you can see below the drive did come quite close to it but fell short by 5MB/s. On the other hand the 2TB RE4 has the same listed speed but surpassed it by 6MB/s. Write speeds were nearly identical down to the hundredth of a megabyte. In this test the Caviar Black comes up below its enterprise counterparts. 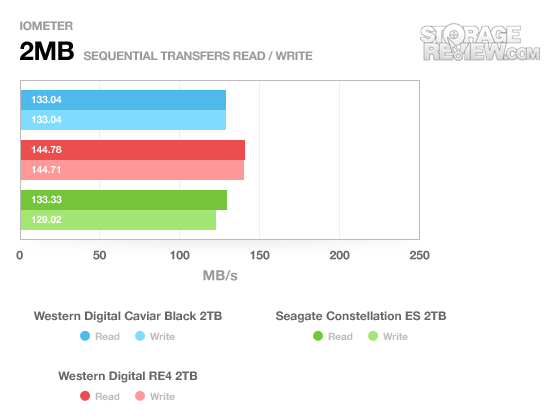 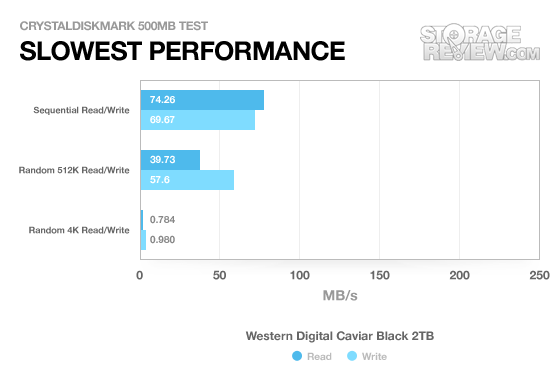 Our next group of tests stress the drives with random read and write activity. In the real-world most drives don’t have data perfectly laid out across the drive in a way to give numbers close to the advertised speeds. This is where our random transfer tests come into play. In the 2MB random transfer test we see the Caviar Black coming out on top of the Constellation ES, but still falling behind the RE4. As we lower the transfer size even lower to 4K the Caviar Black comes out on top for read speeds but falls into seconds place for write speeds. Viewing the activity in I/Ops we see the RE4 still has a clear lead when it comes to write performance but was edged out in read activity. The Constellation ES is almost 10% below the Caviar Black and RE4. Again when looking at the average and max latency we see the RE4 holding a strong lead with the Caviar Black trailing closely behind, and the Constellation ES far behind. One curious bit was the Constellation ES had the lowest Max Latency value which might hint at higher read/write accuracy or just fewer errors crop up during the test. 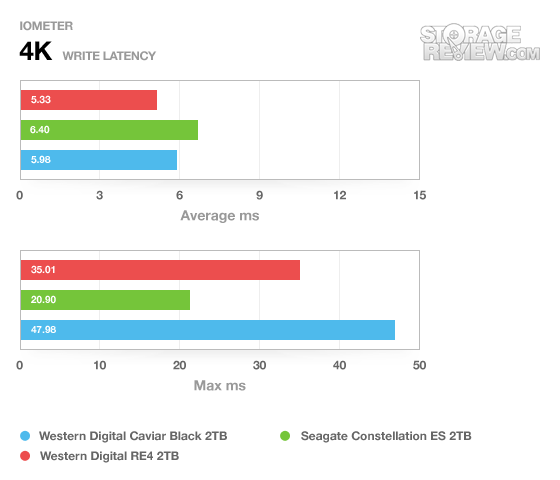 The same lineup of the RE4 in the lead, the Caviar Black in 2nd, and the Constellation ES in third stays consistent in our server tests with high outstanding I/Os. This is the section that we have seen strong performance from Western Digital hard drives compared to their competition. 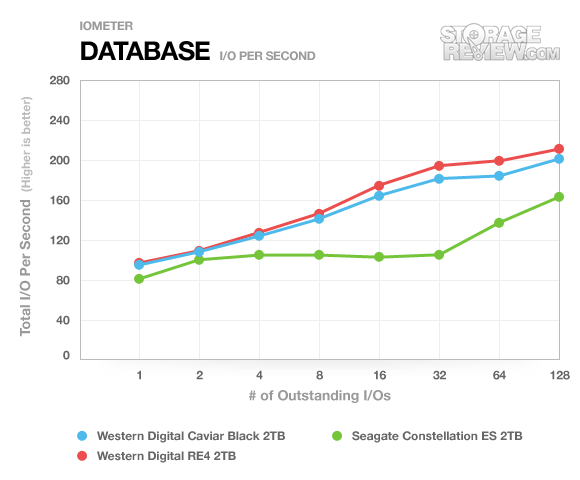 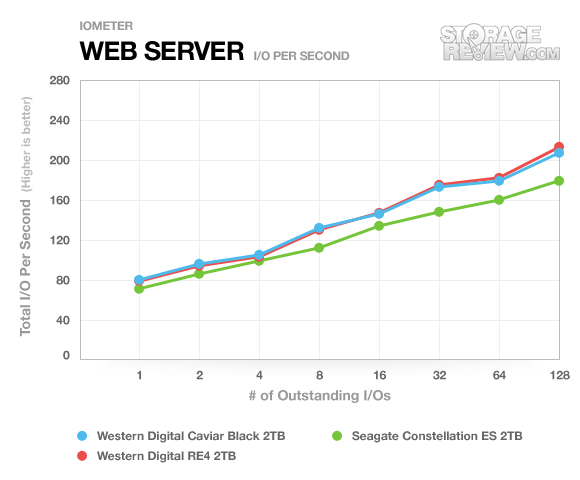 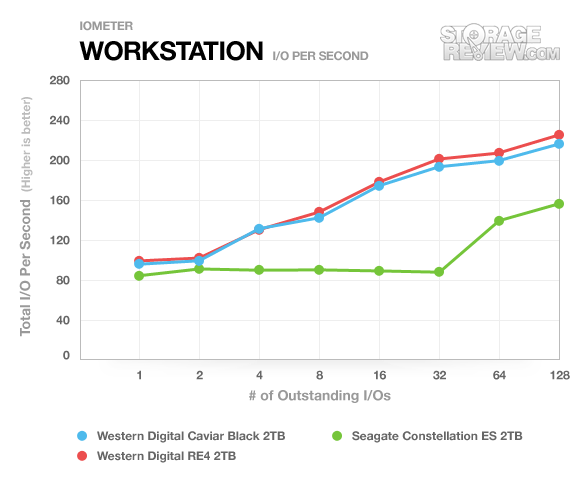 Our final test moves away from synthetic benchmarks, instead capturing the performance of the drive performing real-world tasks. In our HTPC test we include: playing one 720P HD movie in Media Player Classic, one 480P SD movie playing in VLC, three movies downloading simultaneously through iTunes, and one 1080i HDTV stream being recorded through Windows Media Center over a 15 minute period. 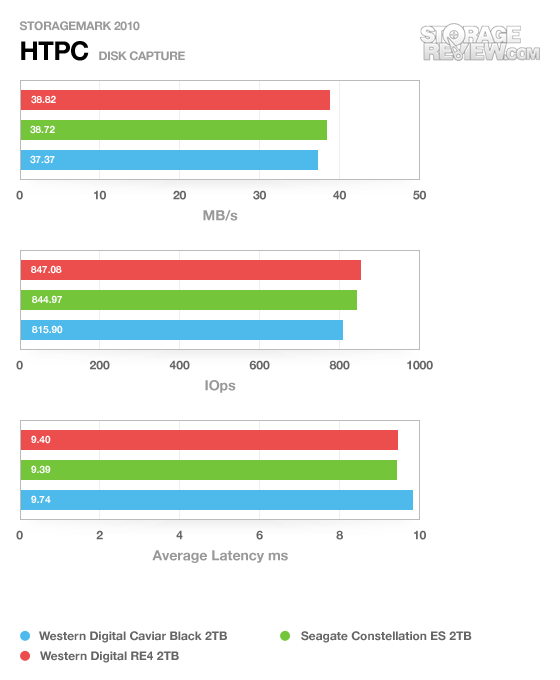 As you can see below the RE4 still holds the #1 spot but we see the Constellation ES has moved up past the Caviar Black.

Read and write power consumption were both consistent with the manufacturer’s claims of 10.7 watts. Idle power consumption actually came up lower in our tests with an average of 6.41 watts measured over a one minute period with no disk activity.

Startup current is one area larger drives tend to hit a foul ball on. With high rotational speeds and a lot of weight to spin up to speed the startup current tends to be quite high. The 2TB Caviar Black took a tradeoff between fast ready times and startup current with a slower startup time. This allowed the drive to limit the inrush power to just under 17 watts. To put this in comparison the Constellation ES and the RE4 used 27 watts and 24 watts respectively. The 2TB Western Digital Caviar Black is a good contender if you are searching for a high-capacity, high-performance consumer hard drive. Compared to the Western Digital RE4 and Seagate Constellation ES it ranks closely in speed and has more than acceptable power consumption levels. In most tests it was only bested by its enterprise counterpart. While a hard disk drive might not give as impressive results as a SSD it is still the most affordable storage medium in price per gigabyte.