Mechanical hard drives may not be big performance breadwinners anymore, but in notebooks they’re still the order of the day. Unless you’re buying a big 17” mobile workstation or desktop replacement, your notebook is liable to be stuck with a single drive bay. So you’re left with a choice: cheap and effective, or high performance and high price. Today we consider former, with the mainstream ultra-slim Hitachi TravelStar Z5K320 (HTS543232A7A384).

Mechanical hard drives may not be big performance breadwinners anymore, but in notebooks they’re still the order of the day. Unless you’re buying a big 17” mobile workstation or desktop replacement, your notebook is liable to be stuck with a single drive bay. So you’re left with a choice: cheap and effective, or high performance and high price. Today we consider former, with the mainstream ultra-slim Hitachi TravelStar Z5K320 (HTS543232A7A384). 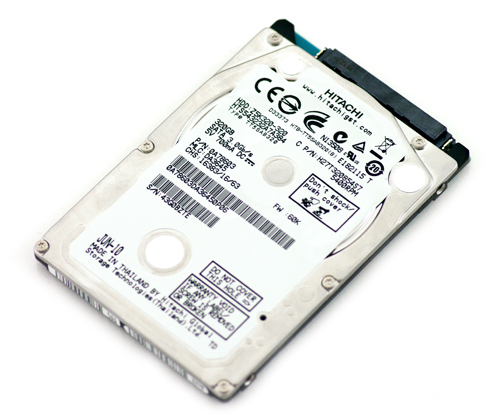 Hitachi’s TravelStar Z5K320 is a 320 GB, 5400-RPM mobile hard drive in an unusually svelte form factor. While the drive conforms to the 2.5” standard, it’s physically thinner than most other notebook drives, shaving 2.5mm off of its height to make it a skinny 7mm. The small height and low power consumption makes this drive a perfect target not just for OEM builds, but for alternative devices like gaming consoles and we’ll surely see them show up in a line of compact external drives. The drives are also available in retail to end users. 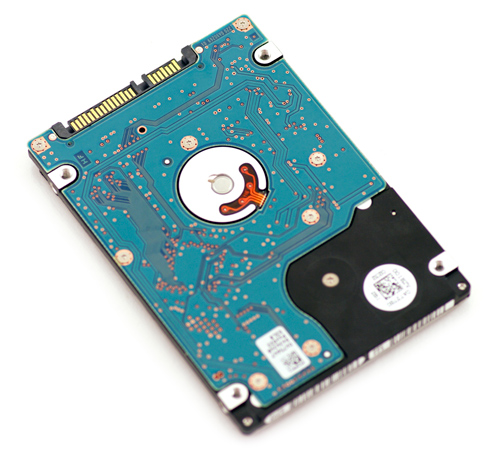 The Z5K320 uses a 3.0Gbps interface, and claims the drive has been tuned for improved thermals and silence. The single 320GB platter design should help offset the comparatively slow 5400-RPM spindle speed. It’s available online for under $50, making it an affordable potential upgrade. The drive is also available in 250GB (HTS543225A7A384) and 160GB (HTS543216A7A384) capacities.

In addition to the end user version of the drive, Hitachi also has a series that support Bulk Data Encryption (BDE) in all three capacities and an Enhanced Availability (EA) line that comes in 320GB and 250GB capacities, which are designed for always-on applications.

The first thing that jumps out at you about the Z5K320 is just how slim it really is compared to other 2.5” hard drives. It’s not the most exciting thing in the world, but it’s a change of pace. Everything else is standard issue, with the usual sticker on the silver lid and a black body. 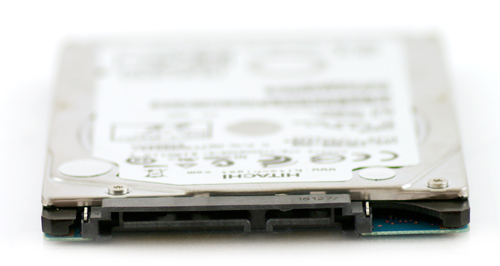 The Hitachi TravelStar Z5K320 is held together with 8 extremely small Torx screws with smooth, flush-mount heads. With the PCB removed, the side with all of the components is exposed, uncovering a Marvell 88i9105-TLA2 controller and an 8MB Samsung DDR-400 RAM module. Overall its surprising how much they can cram onto such a small circuit board in a drive with a 7mm height. 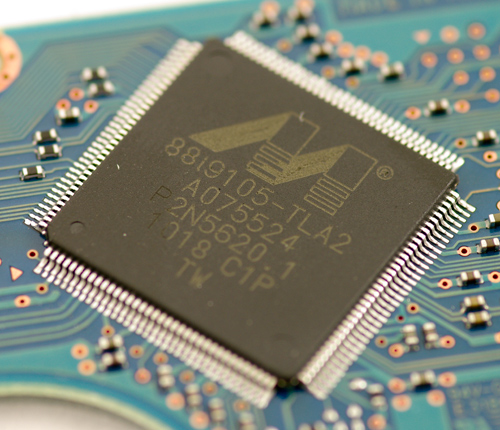 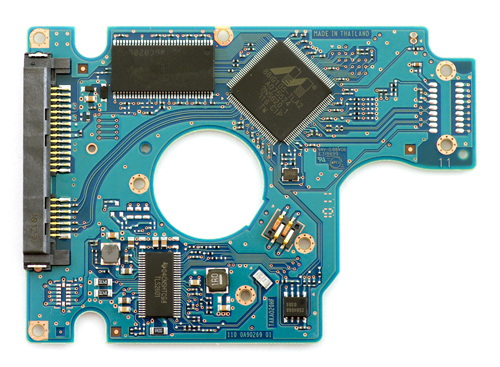 Our synthetic tests are done using IOMeter and CrystalDiskMark; the former to get a feel for how the drive holds up under varied workloads, the latter to get a more generalized feel for the kind of performance the drive is capable of. Putting the two together gives us a fairly clear idea of how we can expect the Z5K320 to handle, and later on in our real-world benchmark tests we’ll see if that bears out.

Competing with the Z5K320 are three other 5400-RPM mobile drives. Each of these drives benefits from having two platters and access to 640GB of capacity as a result, but they’re also going to be bigger than the Z5K320 and will likely draw more power due to having to spin two platters instead of one. 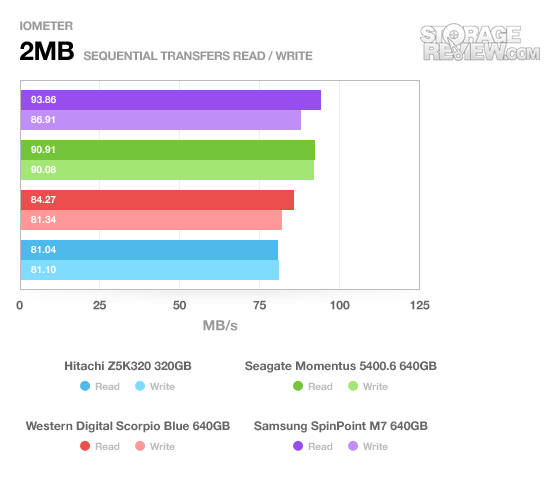 The sequential speeds are a good way to suss out maximum performance, and here unfortunately the Z5K320 gets off to a rocky start. Each competing drive is able to deliver superior performance; in the case of the Seagate Momentus and Samsung SpinPoint M7, it’s a fairly substantial difference. 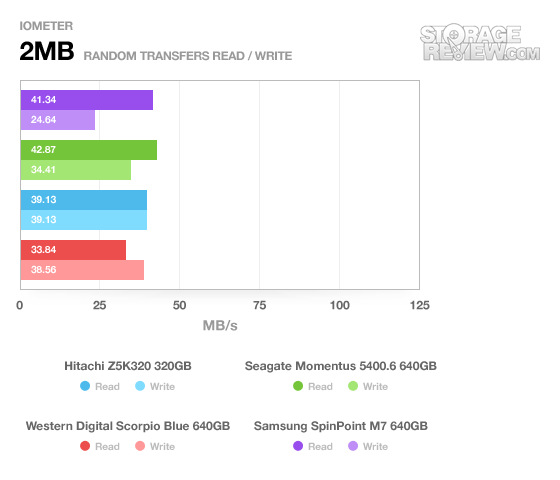 When random transfers are taken into account, the Z5K320 fares remarkably better, easily beating the Scorpio Blue and boasting the best write performance in the lot. 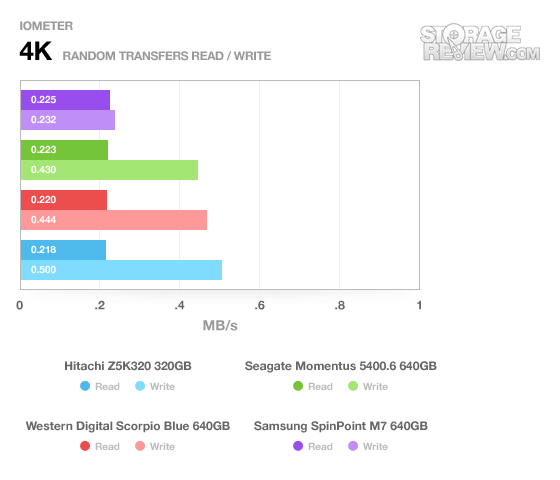 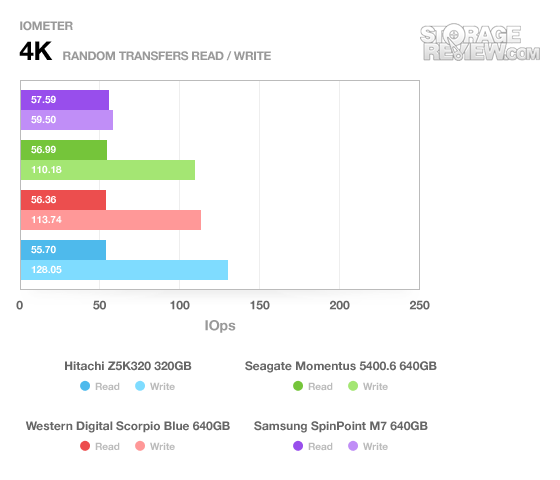 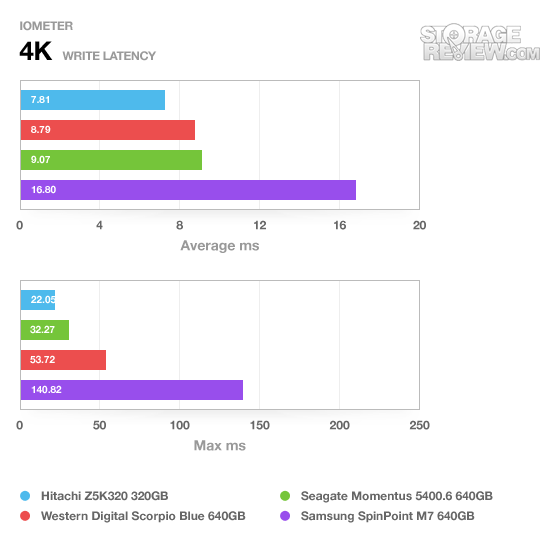 The situation improves in our 4K tests. Random 4K read performance isn’t far behind the competition, but the drive boasts the best random 4K write performance with a healthy lead. 4K write latency was also excellent compared to the other drives in this group with a 13% gap between it and the runner-up.

With these figures in mind, let’s see how the Z5K320 fares in CrystalDiskMark. 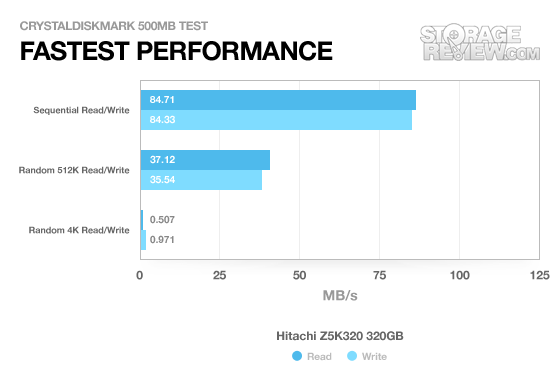 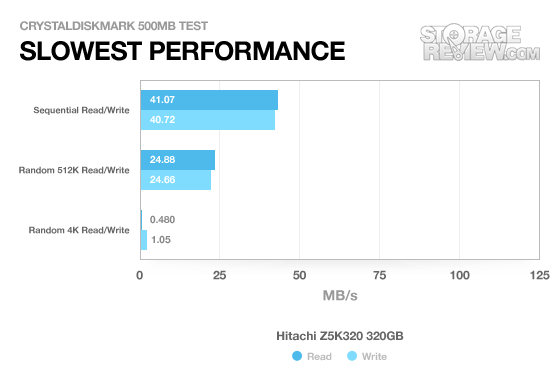 CrystalDiskMark is a bit kinder to the Z5K320 and tends to produce higher peak numbers overall. Where the drive really shines is the write performance, which is never very far from the reads. Hitachi seems to have tuned the drive to deliver as balanced a performance profile as they can get out of it.

Let’s see what happens when we bring the drive back to IOMeter and put it under simulated workloads. 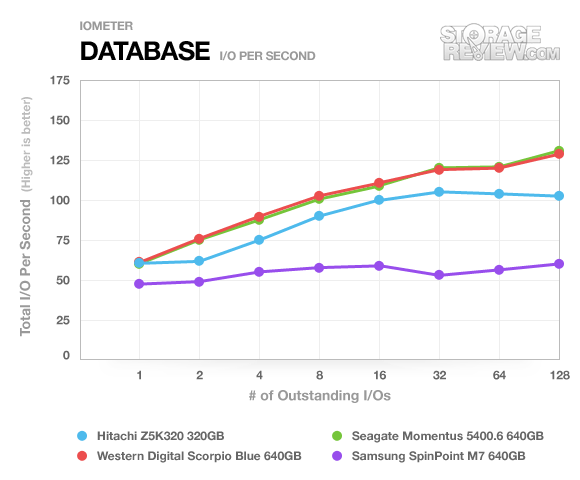 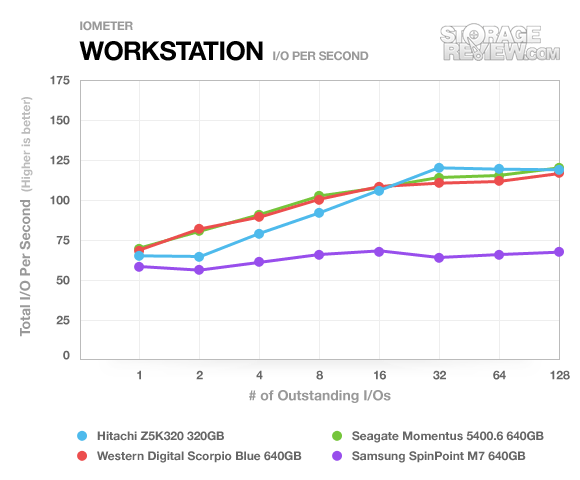 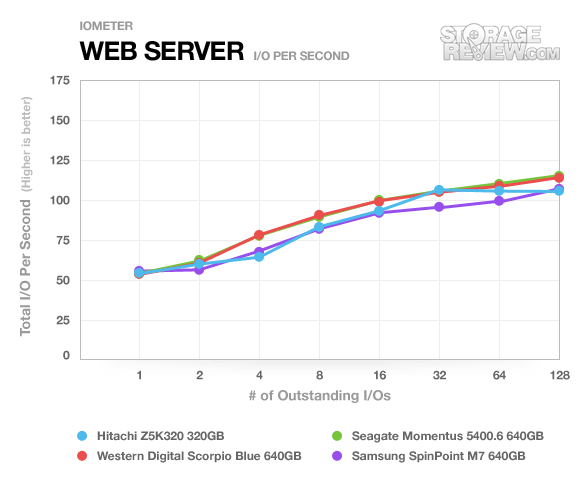 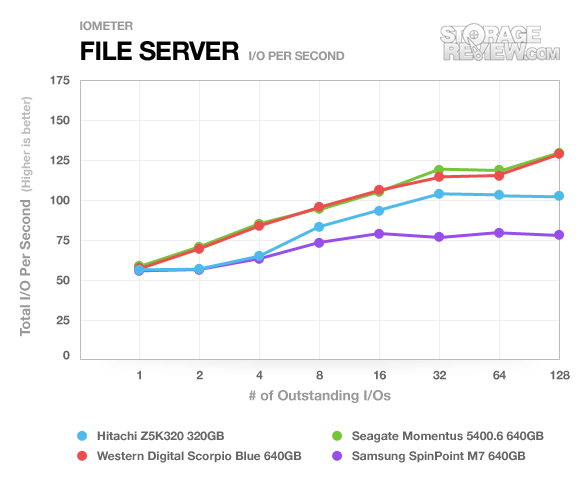 The Seagate and Western Digital drives are more or less inseparable, and here the Samsung SpinPoint M7 flags badly, clearly not designed to handle server work. Hitachi’s drive sits in the middle of the pack.

Now that we’ve got a fairly decent idea of how the Hitachi TravelStar Z5K320 handles, let’s see what happens when we introduce real-world testing into the equation.

We use custom traces in StorageMark 2010 to measure drive performance, starting with our HTPC test. This test plays one 720p HD movie in Media Player Classic, one 480p SD movie in VLC Player, downloads three movies simultaneously in iTunes, and records a 1080i HDTV stream in Windows Media Center over a 15 minute period. 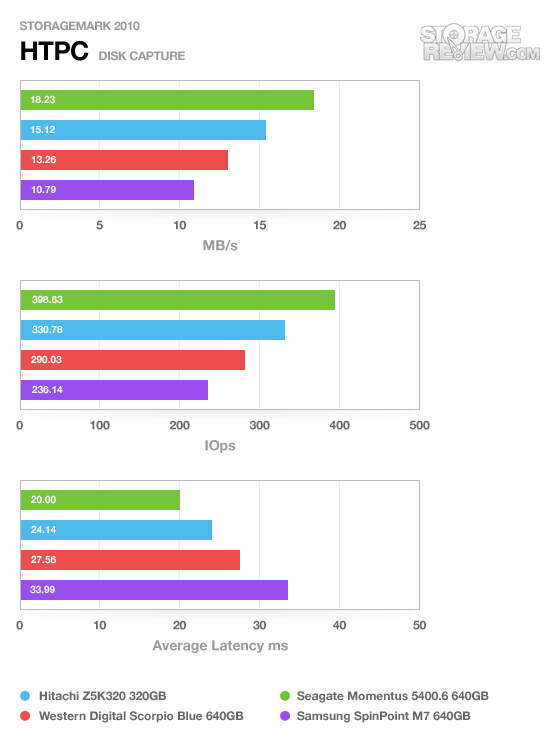 As we expected from the synthetic benches, the Z5K320 fares exceedingly well when faced with a more realistic workload. The only drive that’s able to best it is Seagate’s Momentus 5400.6.

Our next test is our custom Productivity trace. We simulate a three hour period running Outlook 2007 connected to an Exchange server in Vista 32-bit, browse the web using Google Chrome and Internet Explorer 8, edit files within Office 2007, view PDFs in Adobe Reader, and test an hour of local music playback along with two hours of streaming playback from Pandora. Finally, we run our gaming trace. This trace is heavily weighted towards strong read performance, and consists of a Windows 7 Ultimate 64-bit system configured to run Steam. Grand Theft Auto 4, Left 4 Dead 2, and Mass Effect 2 are already downloaded and installed, and each game is loaded from the start and run for a little while. Sometimes it’s perfectly fine to consistently come in second place. Rankings for the other drives are juggled yet again, with the Momentus 5400.6 taking the lead and Western Digital’s Scorpio Blue now offering the worst performance, but the Hitachi TravelStar Z5K320 continues to deliver steady numbers in second place.

Given the single platter in the Z5K320 and Hitachi’s claims to have tuned it for silence, it’s not unreasonable to expect the drive to produce comparatively low power consumption figures. The Z5K320’s startup wattage is actually fairly low, and the balanced performance profile bears out in the way the drive sips power, too. The TravelStar Z5K320 carries a three year warranty, which is the industry standard from drives in this class.

The Hitachi TravelStar Z5K320 proves that even an inexpensive notebook hard drive can be interesting. While it doesn’t push to the front of the pack in tests that look for peak performance, under more normal circumstances it produces performance that’s almost perfectly balanced. The other drives continually jockeyed for position, proving weak in some disciplines and strong in others, but the Z5K320 was always right in the middle of the pack. There’s really a lot to be said for consistency, and the Z5K320 is like clockwork. Balanced performance, balanced power consumption, everything solid if not absolutely exceptional.

Couple the reliable performance with the ultra-thin build and we can see why OEMs, those with compact systems and other specialty users might be pretty excited about this drive.

If your usage model is very specific this drive may not be right for you, but for the average consumer, Hitachi’s TravelStar Z5K320 hits just the right balance.