The arrival of the Travelstar Z7K500 marks the widespread availability of second-generation 7mm portable hard drives. Hitachi’s first-generation Travelstar line demonstrated the technical viability and affordability of the 7mm portable HDD form factor in a marketplace that is pushing for smaller devices and lower power consumption. Second-generation Travelstar drives like the Z7K500 bring added performance to the mix with a 7200RPM rotational speed and 6Gbps SATA interface that translate into better performance than previous 7mm Travelstar drives across a variety of applications.

The arrival of the Travelstar Z7K500 marks the widespread availability of second-generation 7mm portable hard drives. Hitachi’s first-generation Travelstar line demonstrated the technical viability and affordability of the 7mm portable HDD form factor in a marketplace that is pushing for smaller devices and lower power consumption. Second-generation Travelstar drives like the Z7K500 bring added performance to the mix with a 7200RPM rotational speed and 6Gbps SATA interface that translate into better performance than previous 7mm Travelstar drives across a variety of applications.

The Z7K500, successor to the Hitachi Travelstar Z5K500, is offered in 250GB, 320GB, and 500GB capacities. Its 7mm height fits in ultrabook and other slim devices while still allowing the drive to be used with full-size notebooks or in upgrade situations with an adaptor to 9.5mm height. Hitachi also offers the Z7K500 in 300GB and 500GB Enhanced Availability models specified for 24×7 access for enterprises to leverage the small dimensions of the drive to allow additional cooling in dense blade server designs. 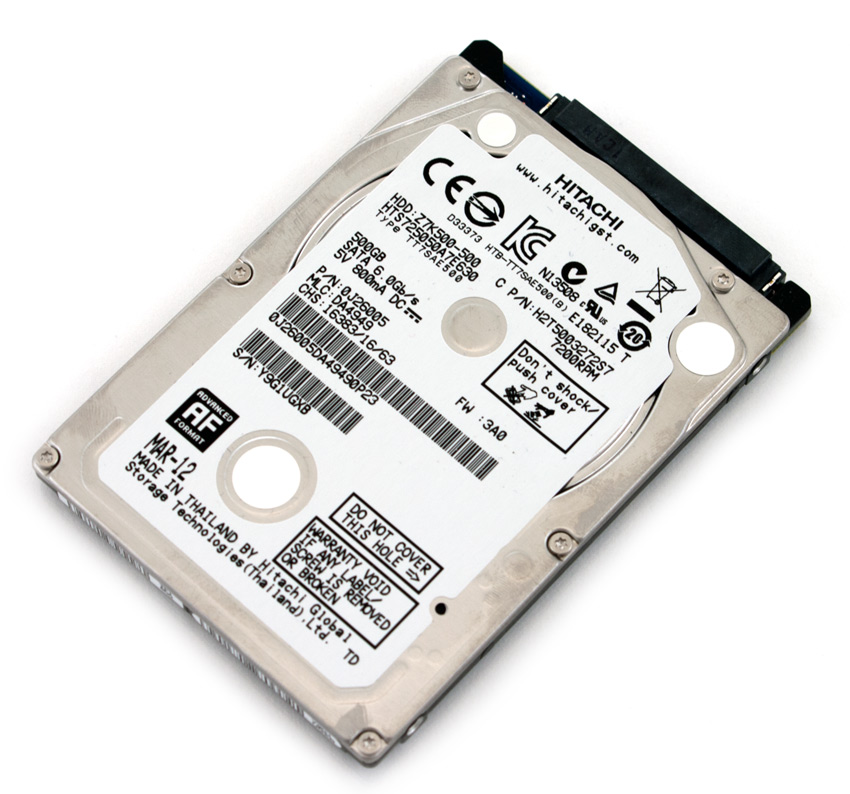 Like most current hard drives, the Travelstar Z7K500 uses Advance Format sector sizes that allow drives to use more than 2.2 terabytes of space even though the Z7K500 does not come in such capacities itself. Most recent operating systems can address Advance Format drives without configuration but some systems may require storage drivers or system BIOS must be updated. Intel-based Macs and most recent Linux distributions support Advance Format boot and data drives. Windows Vista and Windows 7 provide Advance Format GPT partition support, but only 64-bit versions of Windows will allow booting from a GPT partition.

The Hitachi Travelstar Z7K500 looks like any other 2.5-inch hard drive – put on a successful diet. Compared to the standard 9.5mm height, the 7mm size is barely taller than the mounting screw holes on the sides of the case.

The top cover follows the same design scheme as other Hitachi hard drives, with a white sticker with black text covering most of the top. This label includes the drive and part number, shipping firmware revision, and other drive specifics. The bottom of the drive is very clean in appearance, with all surface-mount components facing towards the bottom of the drive. 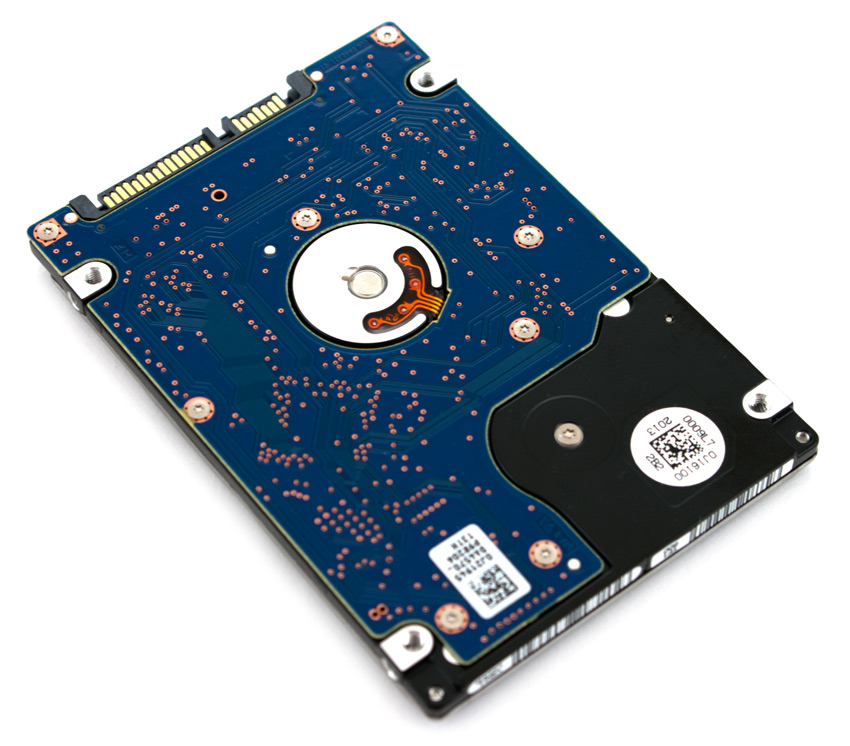 The Hitachi Z7K500 is held together with eight T-4 Torx screws. Once these screws are removed, the PCB easily lifts off the drive body exposing all of the hidden components on the other side of the circuit board. 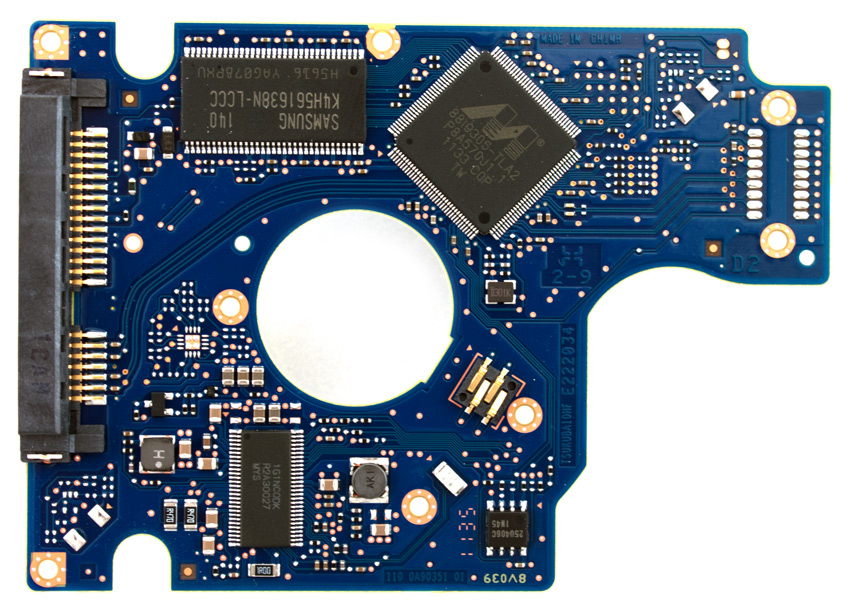 During the last two years, several manufacturers have entered the 7mm hard drive market, making it possible to put drives like the Z7K500 head-to-head with comparables designed for the same form factor. For this review, we will compare the Z7K500 to the first-generation 7mm Travelstar Z5K500 500GB and Travelstar Z5K320 320GB as well as Western Digital’s Scorpio Blue 500GB and the 9.5mm Travelstar 7K500 500GB All drives are tested on our Intel client testing platform.

The first set of benchmarks will push the drive’s specifications with synthetic tests that will shed light on how close the Travelstar Z7K500 can come to its theoretical maximum performance across a variety of operations. All of the Iometer results are listed in MB/s unless otherwise indicated.

The improvements of the Z7K500’s second-generation technology and 7200RPM rotational speed are immediately evident in the 2MB sequential transfer tests, where the Z7K500’s almost-identical read and write performance trumps those of all comparable drives, including the Travelstar 7K500 which also operates at 7200RPM, albeit with an older architecture.

The Z7K500 also leads in the 2MB random transfer test with Western Digital’s Scorpio Blue 500GB not far behind.

Writing 4K blocks of data randomly across the disk is one of the most rigorous synthetic benchmarks for a hard drive, requiring its mechanical components to remain in constant motion across the surface of the drive. 4K random write tests reveal the Z7K500’s weakness against most of the comparables — the Z7K500 only betters its predecessor, the Z5K500. 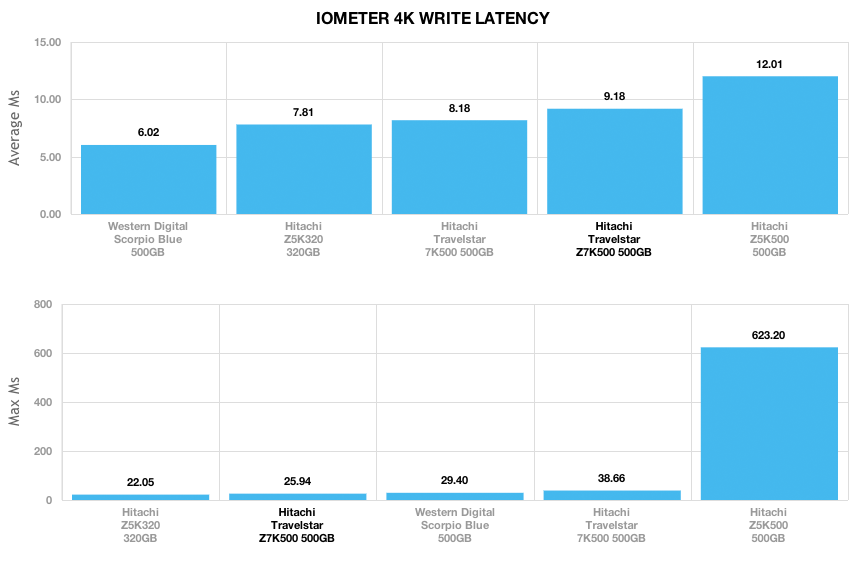 4K write latency benchmarks illustrate the differences that competing drive technologies and configurations can play on the seek time. In these tests, the Z7K500 achieves modest performance in the average latency, and betters all but the lowest-capacity comparable drive, the Z5K320, in maximum latency time. 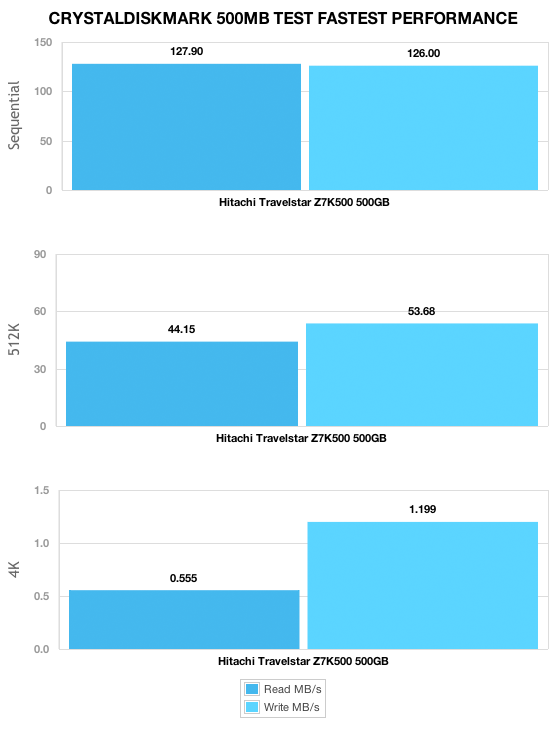 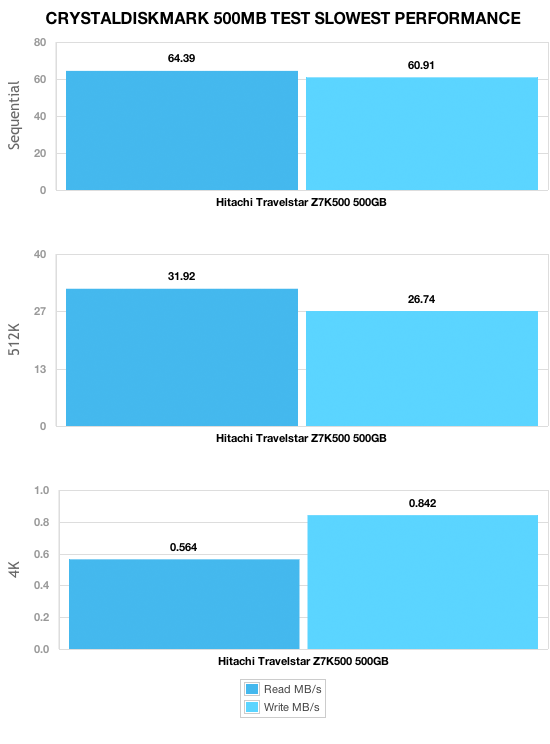 Our final round of synthetic benchmarks simulate typical patterns of use for a variety of server storage applications. We used Iometer to analyze mixed-load server performance for Database, Workstation, File Server, and Webserver profiles, comparing the 7ZK500 to its larger cousin, the Travelstar 7K500 500GB, plus the Scorpio Blue 500GB. The 7ZK500 does not have its strongest showing in the Iometer server benchmarks — while it is usually able to keep up with the 7K500, the Z7K500 is rarely able to outperform the 7K500 and cannot keep pace with Western Digital’s Scorpio Blue. 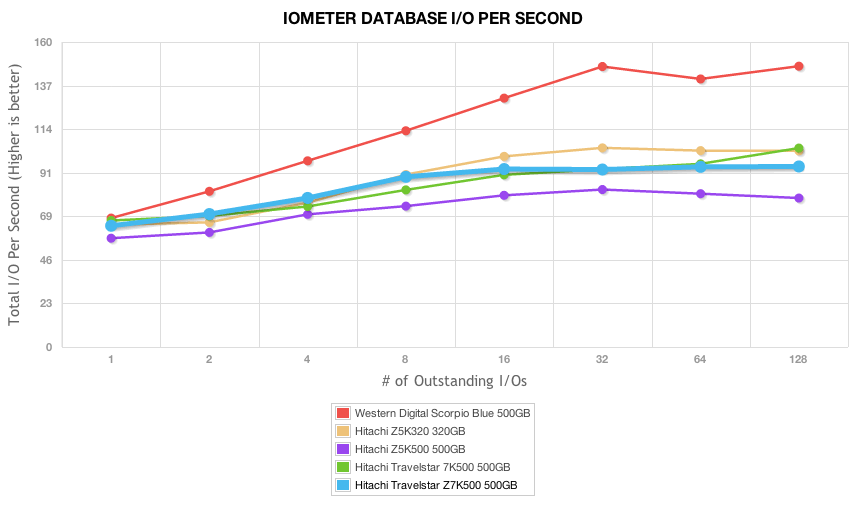 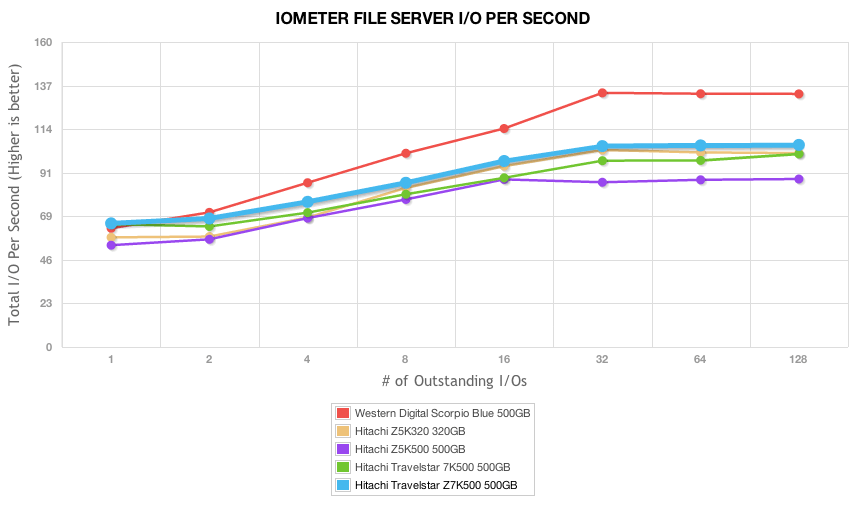 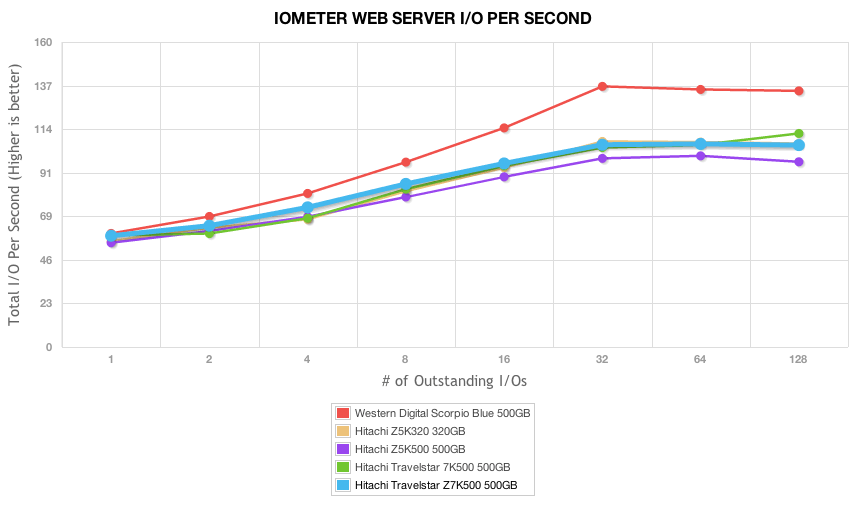 Synthetic benchmarks can sometimes favor theoretical performance over real-world use cases. To balance these synthetic benchmarks, we ran StorageMark 2010’s Gaming Disk Capture trace to profile how the Z7K500 compares to the Z5K320, Z5K500, and Scorpio Blue in a typical PC use case: gaming performance. The gaming trace is 6% write and 94%, read and is hosted on a Windows 7 Ultimate 64-bit system configured with Steam, Grand Theft Auto 4, Left 4 Dead 2, and Mass Effect 2. 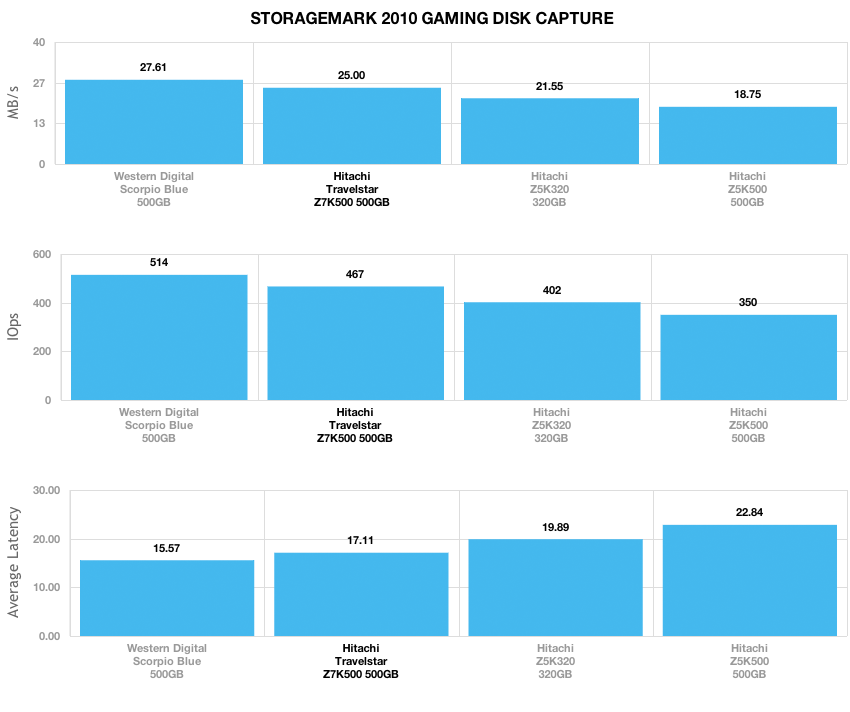 In the gaming trace, the Travelstar Z7K500 trumps the performance of its first-generation predecessors, coming in second position only to the Western Digital Scorpio Blue 500GB.

Power consumption is critical not just for ultraportable drives but also for drives used in enterprise data storage arrays, as with the Enhanced Availability versions of the Z7K500. While the Z7K500 keeps its power consumption within reasonable lines for these applications, the bump up to 7200RPM is evident across the board in our power consumption benchmark.

When StorageReview covered the first 7mm hard drives, the technologies and the form factor were both new and we could only compare drives to similarly-specced 9.5mm hard drives. Now that manufacturers are adopting the 7mm size and there are a variety of competing models it is easier to see where key performance and price points will be.

The Hitachi Travelstar Z7K500 is a worthy successor to the Z5K500, generally adding performance in each category we tested. Its second-generation architecture allows the higher 7200RPM rotational speed, which may bring even bigger gains for future Travelstar drives.

The Hitachi Travelstar Z7K500 is a capable drive, and the best performing 7mm drive from Hitachi to date. It has trouble topping Western Digital’s Scorpio Blue in most benchmarks but still offers one of the best combinations of performance and capacity currently available in this form factor.