Serving as an upgrade to the Z620, the HP Z640 is designed to give professionals who work with resource-heavy applications an extra boost in their productivity. The Z640 is also targeted to businesses that simply want to equip their employees with a high-performance workstation at a mid-range price. As you can see from its comprehensive set of options listed in the specifications below, the HP Z640 is a highly-customizable workstation that can be used for a wide range of use cases, allowing businesses to create a very specific build to accurately suit their needs. The HP workstation also offers a complete tool-less design that gives administrators easy access for quick component upgrades and maintenance.

Serving as an upgrade to the Z620, the HP Z640 is designed to give professionals who work with resource-heavy applications an extra boost in their productivity. The Z640 is also targeted to businesses that simply want to equip their employees with a high-performance workstation at a mid-range price. As you can see from its comprehensive set of options listed in the specifications below, the HP Z640 is a highly-customizable workstation that can be used for a wide range of use cases, allowing businesses to create a very specific build to accurately suit their needs. The HP workstation also offers a complete tool-less design that gives administrators easy access for quick component upgrades and maintenance. 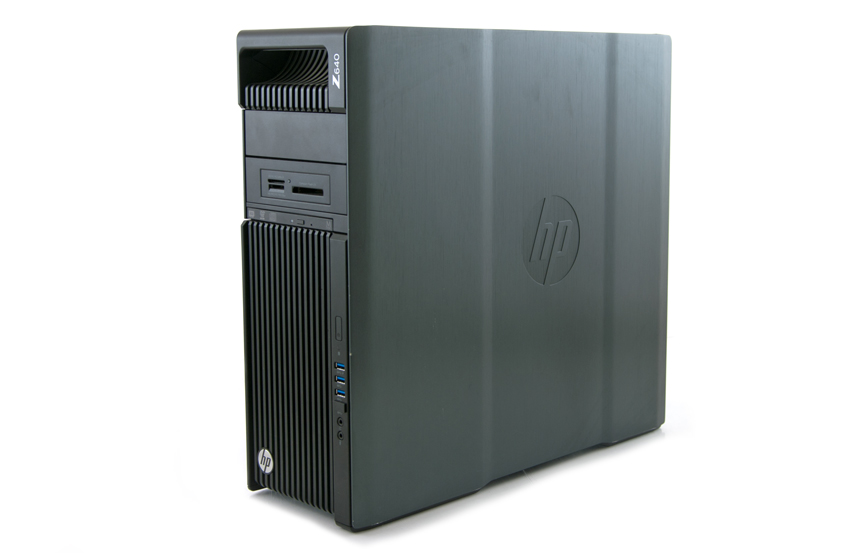 The modular design of the HP Z640 allows the user to configure the workstation as a single or dual processor system. Adding a second processor module allows for a second CPU, as well as four additional memory slots (for a total of eight DIMM slots). This is pretty impressive for such a compact workstation.

One of the most important features of the Z640 workstation is its compatibility with HP’s Z Turbo Drive G2 (256GB, 512GB and 1TB capacities), as the NVMe drives provide some pretty significant performance gains over standard high-performing SSDs. This includes: faster boot up, calculation, and graphics response times. It also allows for ideal work conditions under resource-heavy applications, adding a ton of versatility and power to the Z640. HP has also upgraded the storage offering in the Z640, with the new Z Turbo Drive G2 offering maximum sequential read and write throughput up to 2.5GB/s and 1.55GB/s. Moreover, the HP Z640 supports up to 8 memory DIMMs with a maximum 256GB of DDR4 RAM, and can be equipped with two next generation Intel Xeon processors for up to 44 total processor cores in one system.

The HP Z640 also comes with four USB 3.0 ports (one of which is a charging port) and one Thunderbolt 2 port, allowing those who rely on huge amounts of data transfers to significantly boost their workflows. Users can also customize their Z640 with various SATA and SAS RAID configuration options, all of which support a wide-range of high-performance, high-capacity storage solutions.

HP has built the Z640 workstation with an easy access, tool-free chassis as well as low acoustics and quiet operation. It is also quite a compact design for the power that it houses under the hood. The Z640 also features both front and rear handles and is 4U-rack mountable for easy installation.

Looking at the front panel first, you will see that the vast majority is taken up by ventilation. This promotes fluid air-flow, keeping the workstation nice and cool. In the middle resides the dedicated 9.5mm optical drive bay, while several connection ports and an LED status indicator are located along the right side of the Z640. Along the right side are: four USB 3.0 ports (the top-most being a charging port), an HDD Activity LED, a power button, and a microphone and headset port.

Turning the Z640 around to the rear panel shows additional connectivity, including the rear power button, four USB 3.0 and two USB 2.0 ports, PS/2 ports, one RJ-45 to Integrated GbE, and one Audio Line In and Audio Line Out port. The security and PCI/PCIe card access slots are located the bottom.

Removing the side panel reveals a tightly packed, yet intelligently designed, layout of the components. Standing up and starting from right to left, you will see 2x external 5.25” and 2 internal 3.5” bays, the Intel Xeon E5-2667 processors (the second CPU module connector is just below CPU 0), the 925W, 90% efficient power supply, and 4x DIMM Slots for DDR4 ECC Registered Memory (our unit has 64GB). The bottom is where most of the slots and connectors are found: one PCIe x8 Gen 3, one PCIe x1 Gen 2, one PCIe x4 Gen 2, and one PCI slot, as well as two PCIe x16 Gen 3 slots just above. There are also six 6Gb/s SATA ports. 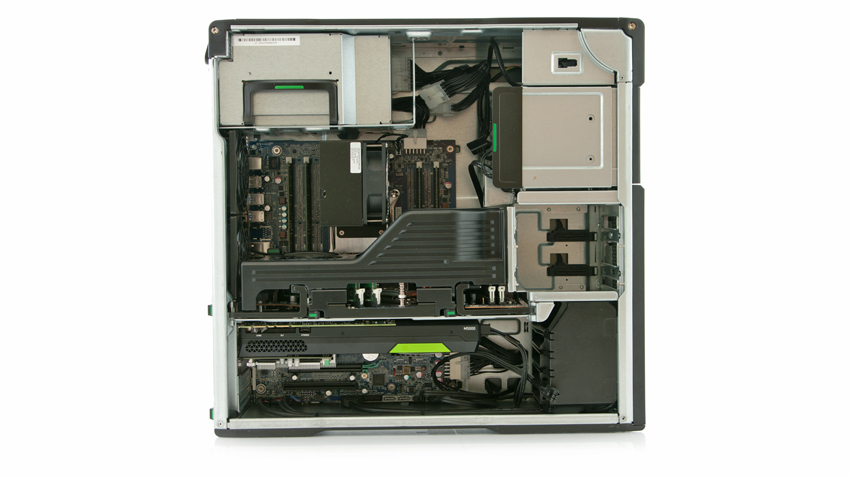 The Z640 supports up to 225 W graphics or compute card in the primary graphics slot. A second graphics card can be installed in the second PCIe3 x16 slot, while a third and fourth graphics card (2D) can be inserted in PCIe 2 slots. HP indicates that the total power consumption of all installed cards cannot exceed 375 W, as it might cause tripping of the power supply. HP has also added thermal sensors inside the Z640 workstation, which are designed to regulate computer fans to maintain an acceptable, efficient chassis temperature.

We will be using the NVIDIA Quadro M2000 and NVIDIA Quadro M5000 (which we will be testing in the performance section below) workstation PCI Express 3.0 x16 video cards. The former is a mid-range professional graphics solution equipped with 4GB GDDR5 of memory and four DisplayPort 1.2 multi-stream outputs, all of which all support true 4K 4096 x 2160 resolutions at 60Hz. Overall, the M2000 is an affordable professional graphics card that excels in workstation applications like the HP Z640.

The M5000 is high-performance card equipped with 8GB GDDR5 of memory, giving users the ability to create and render large, complex models and to compute massive datasets with ECC support for further reliability.  It includes 30-bit color support for high-dynamic range displays and features temperature control software. The M5000 also supports a maximum resolution of 4096 x 2160 at 60 Hz for true 4K.

Both NVIDIA cards leverage software technologies such as CUDA and NVIDIA Application Acceleration Engines, allowing them to work much more effectively during resource-heavy applications such as 3ds Max, and AutoCAD.

Memory reliability is also a concern to HP, as it offers ECC fault prediction with the Z640. When the computer encounters an excessive number of error checking and correcting (ECC) memory errors, it will emit a local alert message containing information about the DIMM in question. This allows you to fix the issues before it is too late and you’re stuck with non-correctable memory errors, loss of critical data, and unplanned downtime. ECC DIMMs are standard on this computer.

In order to test the HP Z640 workstation, we will be using various tests that demonstrate how it performs in resource-intensive workloads and storage tests, and to show the benefits of the HP Z Turbo Drives. We will also be targeting the performance of the video cards.

In our first benchmark, we will look at the video card performance of the HP Z640. For this we installed PCMark, a tool that calculates the performance at the system and component level and most often represents typical home user workloads for all types of PCs, including tablets, mobile workstations, and desktops. While there are multiple categories that PCMark tests (including typical work usage, home usage, and creative usage), we will only be looking at Storage and Home Conventional benchmarks.

The Storage PCMark tests the performance of any drives installed in the system. Specifically, it leverages traces recorded from Adobe Creative Suite, Microsoft Office and a selection of more popular video games to measure real-world performance differences between storage devices. Here, the HP Z640 posted an impressive PCMark score of 5014 with a bandwidth of 330.68MB/s, which was attained by leveraging two Z Turbo Drives.

The Home Conventional benchmark measures the HP Z640’s performance during a series of common tasks typical of daily home use. Workloads of this nature are usually fairly light, as it tests web browsing, writing, casual gaming, photo editing, and video chat workloads. The  Z640 posted an impressive Home score of 4209 and 4214 when using the NVIDIA Quadro M2000 and M5000, respectively.

The next benchmark is SPECviewperf 12, the worldwide standard for measuring graphics performance based on professional applications. SPECviewperf runs 8 benchmarks it calls viewsets, which all represent graphics content and behavior from actual applications. These viewsets include: CATIA, Creo, Energy, Maya, Mecial, Showcase, Siemens NX, and Solidworks. Here, the HP Z640 showed very impressive performance when using the M5000 video card, as it consistently produced best-of-class results. This was highlighted by the Energy (9.72), CATIA (129.82), and Siemens NX (118.67) viewsets. As expected, using the NVIDIA Quadro M2000 card showed lower scores in all of the viewsets, all of which were roughly middle-of-the-run results.

Next, we will be looking at the performance of HP’s Z Turbo Drive G2, which is an important component of the Z640 workstation. We will be comparing it to the following workstations and configurations. One important aspect of clarification is that the Z640 had its primary boot drive tested, while the same SSD inside the HP Z1 G3 was able to be tested as a secondary drive. As a result, speeds will look greater on the Z1, even though it is the exact same drive.

Our 4K Write Latency tests showed HP Z640 equipped with the Turbo drives showed an average latency at 0.0512ms and a maximum latency at 8.739ms. 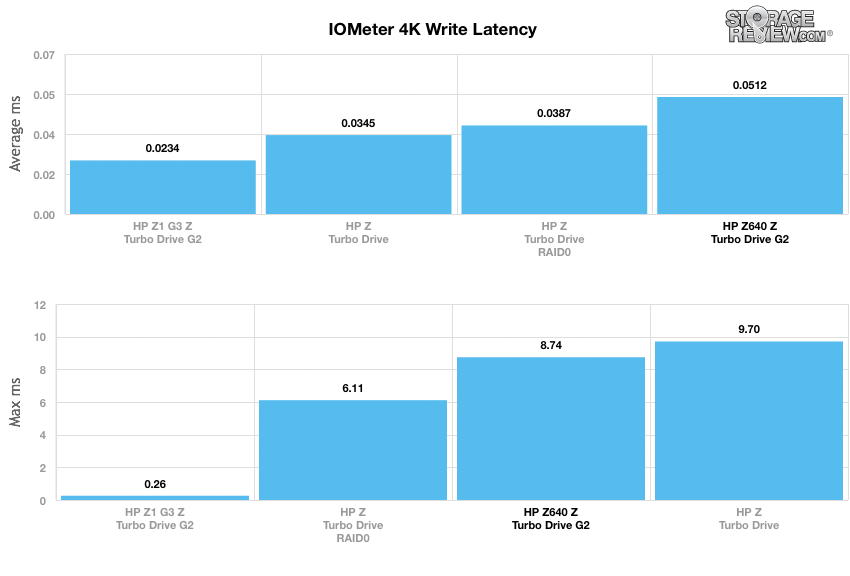 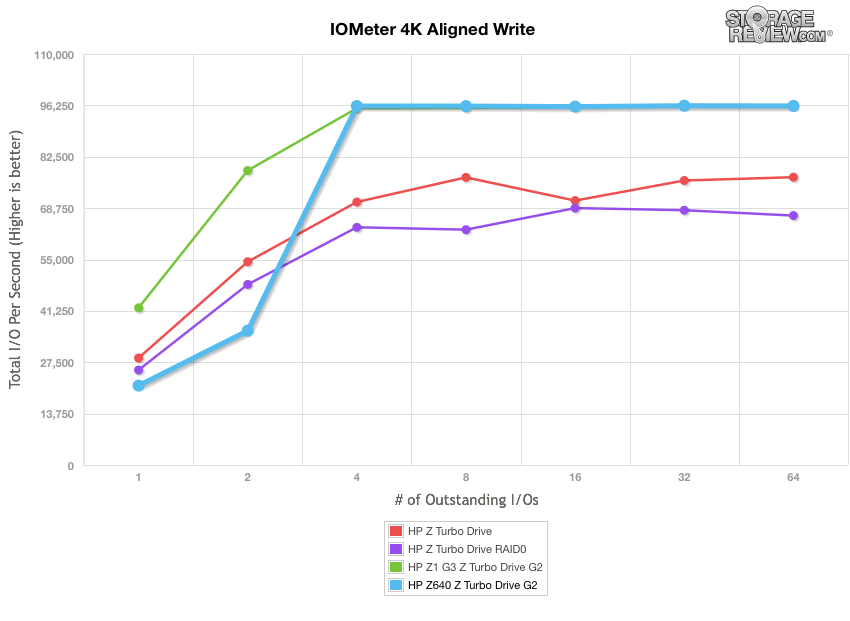 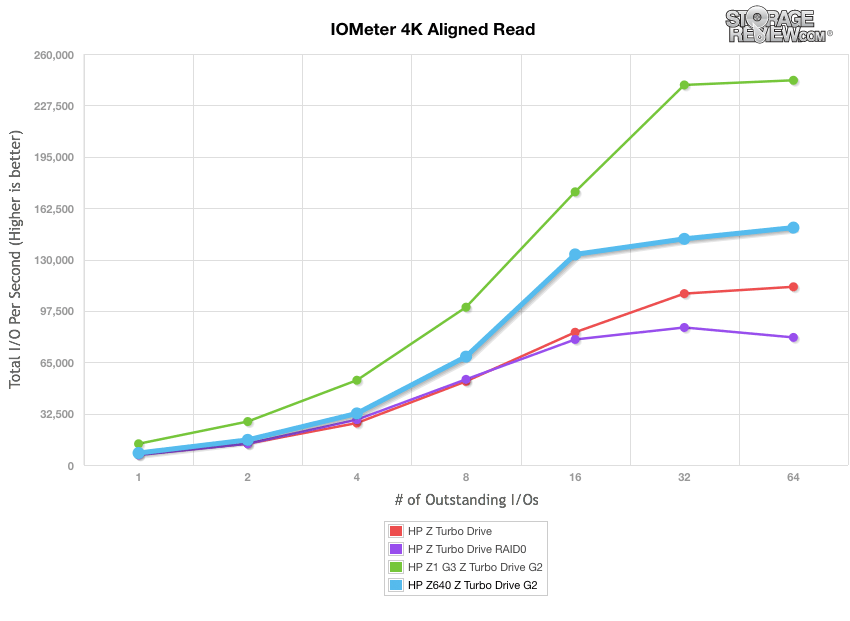 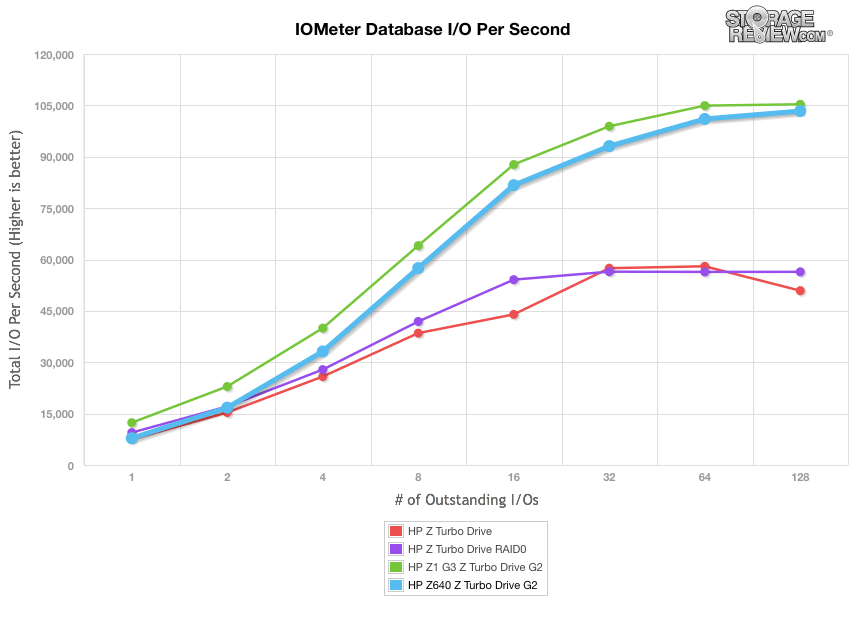 The next profile looks at a file server, with an 80% read and 20% write workload spread out over multiple transfer sizes ranging from 512-byte to 64KB. Results here told a similar story, as the HP Z Turbo drives posted similar performance, starting at 7,515.22 and peaking with 94,943.49 IOPS in the terminal when used as the primary drive in the Z640 (just behind the Z1 once again). 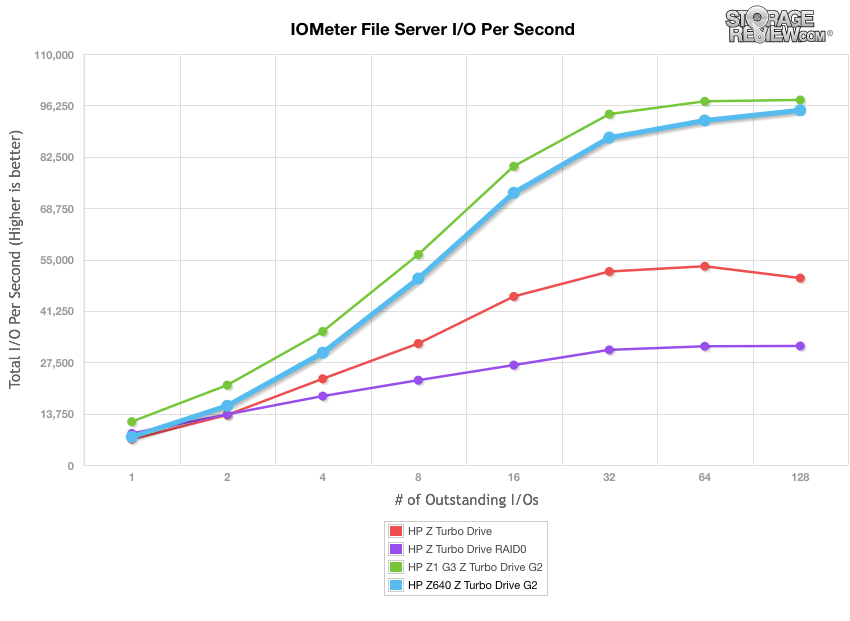 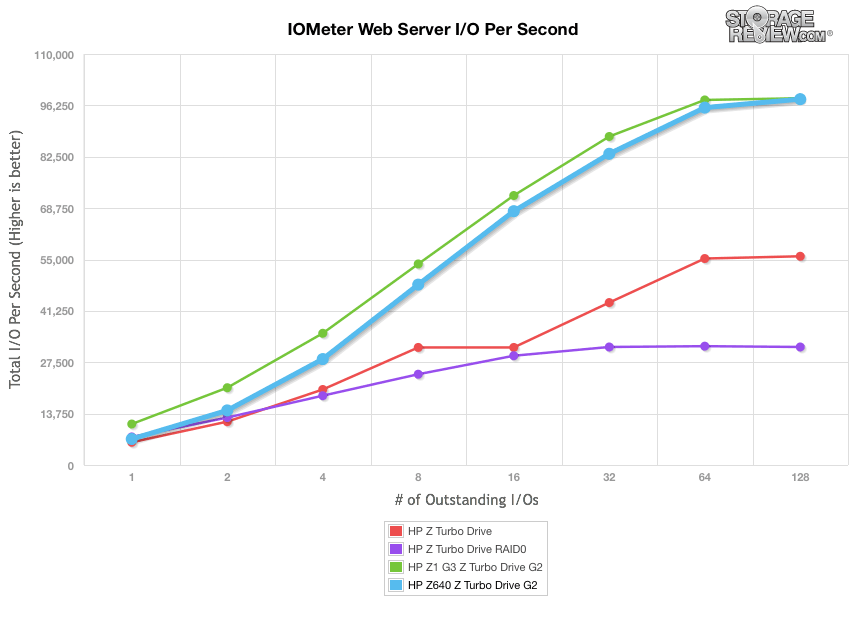 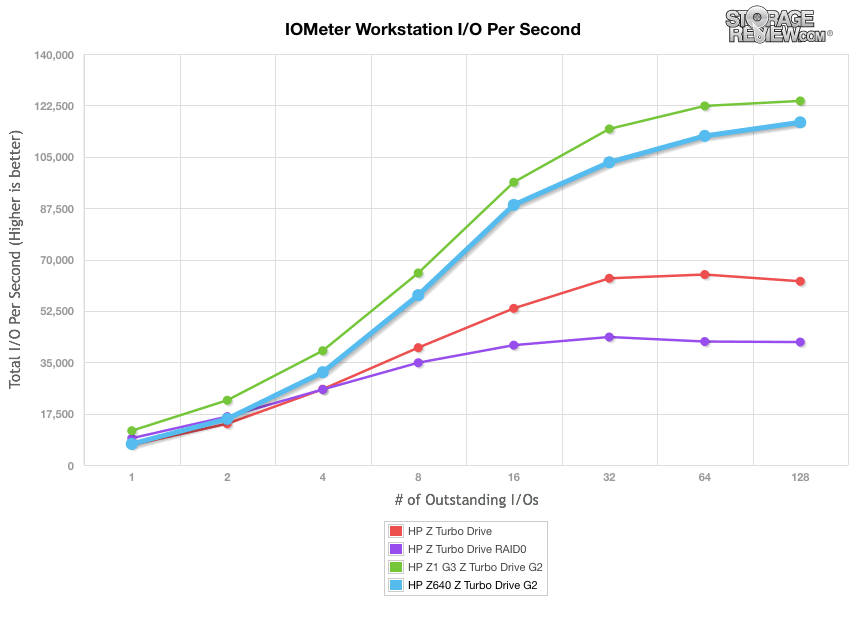 The HP Z640 is certainly a flexible workstation that gives users the option of installing a second processor. It leverages the Intel C612 chipset, which supports up to 22-core Intel Xeon E5-1600 and E5-2600 processor series. Moreover, the Z640 does a very good job at providing the maximum performance possible in such a small space, while offering an easy-to-use, tool-free design with an impressive set of expandability options for its size (you can add storage capabilities or additional I/O options seamlessly). The HP Z640 can be outfitted with a maximum 256GB (8x32GB) 2400MHz DDR4 RDIMM ECC of memory and offers numerous internal storage options that include several SSD configurations. With its efficient use of heatsinks and fans, as well as its active fan control, the HP Z640 offers acoustics that are even quieter than its predecessor. It also comes with full-grip integrated carrying handles, making it easy to move around the office.

To measure the overall performance of the HP Z640, we put it through a variety of different tests to demonstrate how it performs in resource-intensive and casual workloads, as well as storage tests to show the benefits of the Z Turbo Drive G2. We also targeted the performance of the video cards. During our Storage PCMark tests, the HP Z640 posted an impressive score of 5014 with a bandwidth of 330.68MB/s, while the Home Conventional benchmark showed a score of 4209 and 4214 when equipped with the NVIDIA Quadro M2000 and M5000, respectively.

The HP Z640 Workstation offers a lot of power and functionality packed in its compact, modular design, while giving buyers a great deal of flexibility in CPU, graphics and storage offerings.