QNAP's new QTS-Linux combo NAS provides a unique feature set that is geared towards forward-thinking SOHO users, storage enthusiasts, and IoT (Internet of Things) developers. By supporting the open-source platform that Linux embodies, QNAP has taken steps towards integrating private servers with Internet of Things (IoT) solutions and smart devices. Besides its IoT features, the TS-453A is a fully functioning 4-bay private server that utilizes all of QNAP's QTS applications, empowering users to easily virtualize their storage operations.

QNAP's new QTS-Linux combo NAS provides a unique feature set that is geared towards forward-thinking SOHO users, storage enthusiasts, and IoT (Internet of Things) developers. By supporting the open-source platform that Linux embodies, QNAP has taken steps towards integrating private servers with Internet of Things (IoT) solutions and smart devices. Besides its IoT features, the TS-453A is a fully functioning 4-bay private server that utilizes all of QNAP's QTS applications, empowering users to easily virtualize their storage operations. 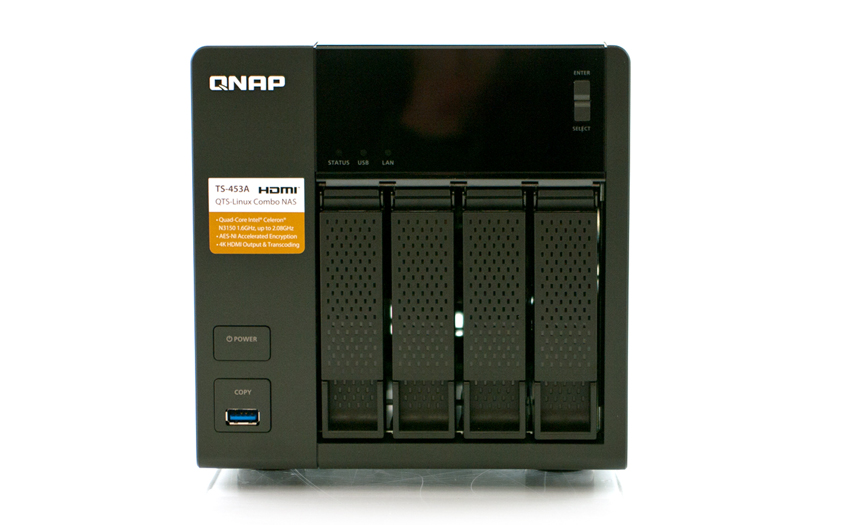 The TS-453A may garner special interest from IoT developers due to its versatility, especially since many vendors have yet to include such developers in their target market. The QTS App Center also provides access to IoT applications, in the event that users wish to simply implement IoT technology without necessarily innovating in that field. The TS-453A is capable of delivering reported transfer speeds of 414MB/s read, with almost no reduction in performance when its AES-NI hardware-accelerated encryption engine is used. As with many of QNAP's NAS units, the TS-453A also provides real-time and offline 4k video transcoding. In addition to its video transcoding capabilities, several other features make the TS-453A a well-equipped media center, including: QNAP's OceanKTV karaoke app, two HDMI ports, and the built-in App Center.

In terms of disaster recovery, the TS-453A supports RTRR (Real-Time Remote Replication) for routine backups, while rsync protocols can provide additional scheduled back ups. QNAP also allows users to delegate backups to third-party cloud storage applications like Amazon S3, Amazon Glacier, Microsoft Azure, ElephantDrive, and Dropbox. QTS Storage Manager, yet another backup contingency, leverages backups through a web-based snapshot tool (with 256 snapshots per volume/LUN and 1024 snapshots per NAS). Additional features like Qsirch, Virtualization Station, Container Station, and NetBak Replicator give users plenty of customization options so that they can tailor their private server to their specific needs.

The TS-453A uses QNAP's generic 4-bay NAS enclosure, with a sticker on the front that sets it apart from QNAP's other offerings. The drive bays are also accessed along the face of the enclosure, along with the power button and one USB 3.0 port. There is also a digital display with some basic navigation functions above the drive bays, in addition to three LED lights (that correspond to system status, USB connectivity, and LAN connectivity). 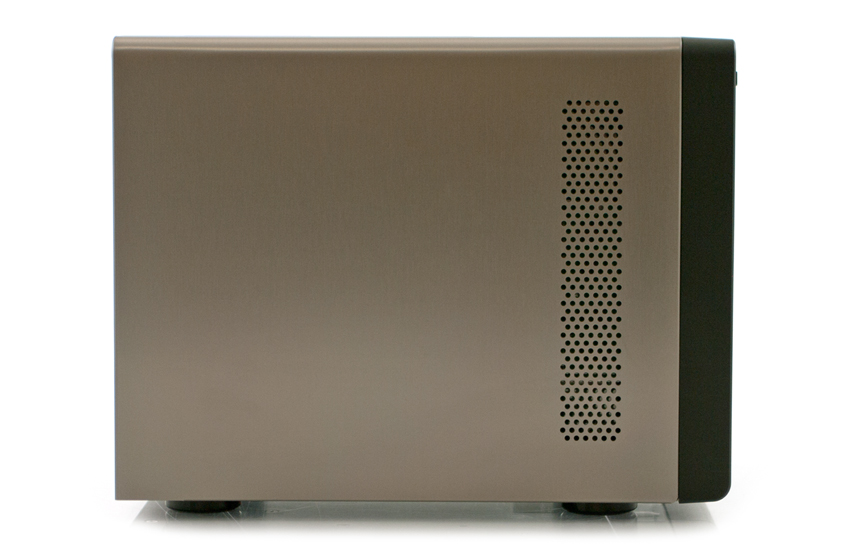 The rest of the ports are located at the back, along with the large fan. The power port, four LAN ports, three USB 3.0 ports, two HDMI ports, and reset button are oriented along the right side of the back of the enclosure. Above the fan, there are two 1/4" audio jacks that are used with microphones for QNAP's OceanKTV karaoke app. There is also an 1/8" audio port (stereo out) and a Kensington lock. 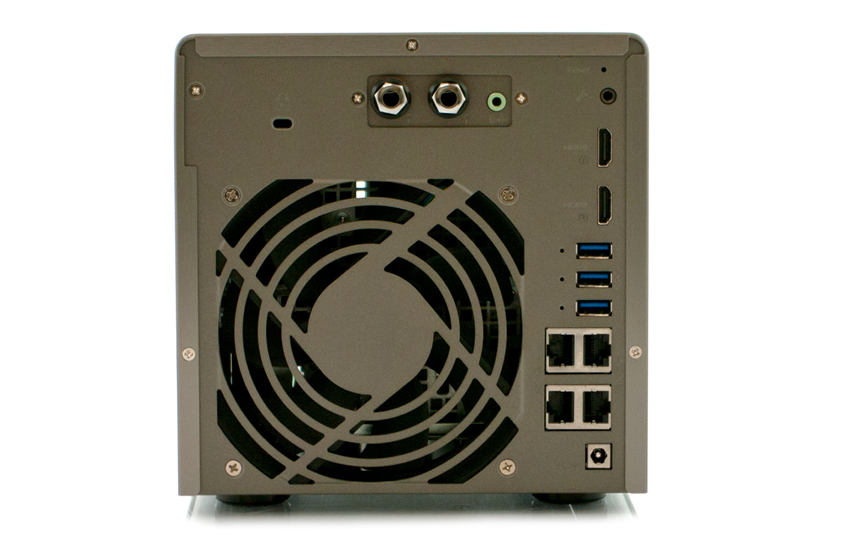 We will be testing the QNAP TS-453A using the following NAS drive and configurations:

In the first of our enterprise workloads, we measured a long sample of random 4k performance with 100% write and 100% read activity. Here, the QNAP TS-453A boasted top reads with 2,317 IOPS when configured in iSCSI. The Synology DS916+ trailed the QNAP NAS in read functions with 1,289 IOPS when configured in iSCSI; however, it exhibited the best write activity by a significant margin during our file-level CIFS test with 3,880 IOPS.

The results of the average latency showed the QNAP TS-453A with the most consistent results (110.467ms read and 188.417ms write) when configured in iSCSI. However, the Synology DS916+ had the best write latency with just 65.97ms during our file-level CIFS test.

Looking at standard deviation of random 4k performance showed mixed results across the board. In our CIFS configuration, the TS-453A posted 556.52ms read and 190.9ms write, while our iSCSI test showed read and write functions of 115.27ms and 339.29ms, respectively.

Compared to the fixed 16 thread, 16 queue max workload we performed in the 100% 4k write test, our mixed workload profiles scale the performance across a wide range of thread/queue combinations. In these tests, we span workload intensity from 2 threads and 2 queue up to 16 threads and 16 queue. Devices configured in iSCSI had the best performance when looking at throughput, and the QNAP TS-453A lead the way with a range of 507 IOPS to 1,566 IOPS. The Synology DS916+, however, recorded a range of just 384 IOPS in burst and 958 IOPS in the terminal. 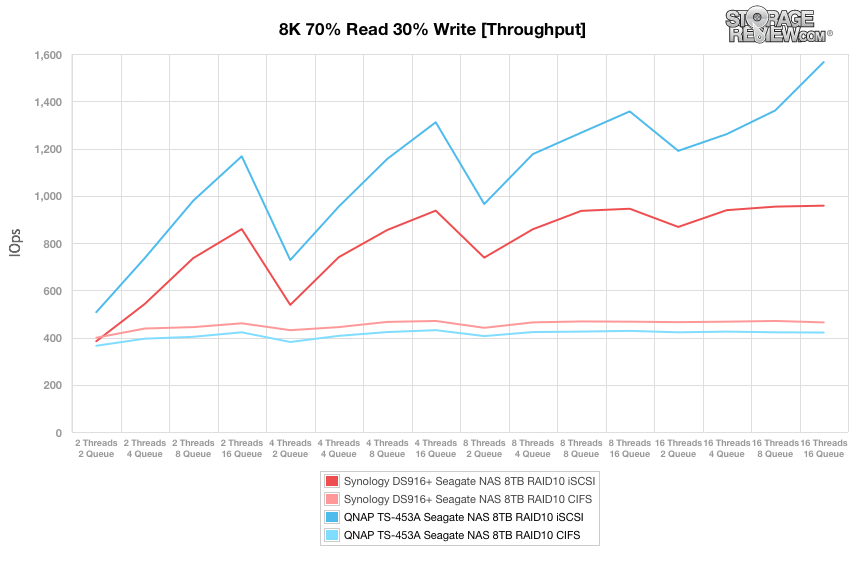 As is expected, the results of the average latency benchmark were more or less the same as throughput benchmark with iSCSI configurations outperforming CIFS. Here, the QNAP TS-453A again had the best performance with a range of 7.84ms to 163.27ms, while the best DS916+ configuration showed a range of 10.39ms to 266.88ms. 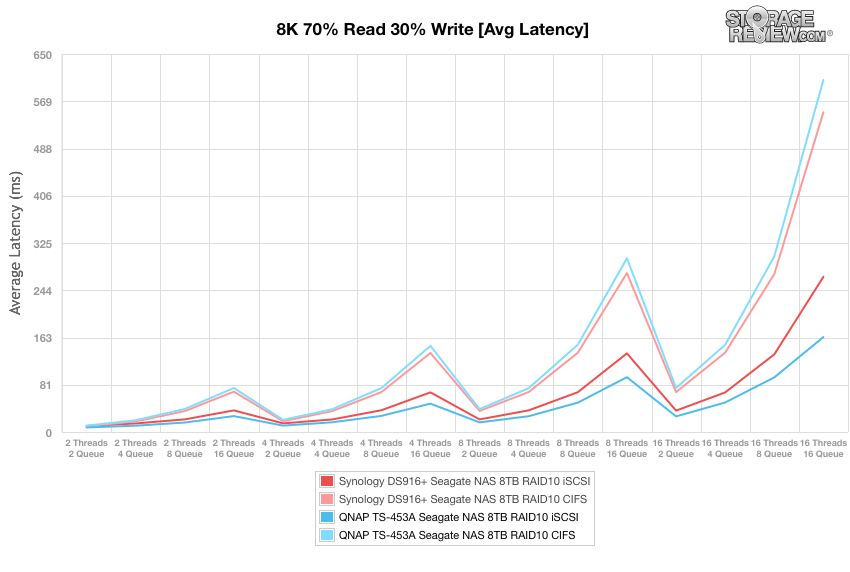 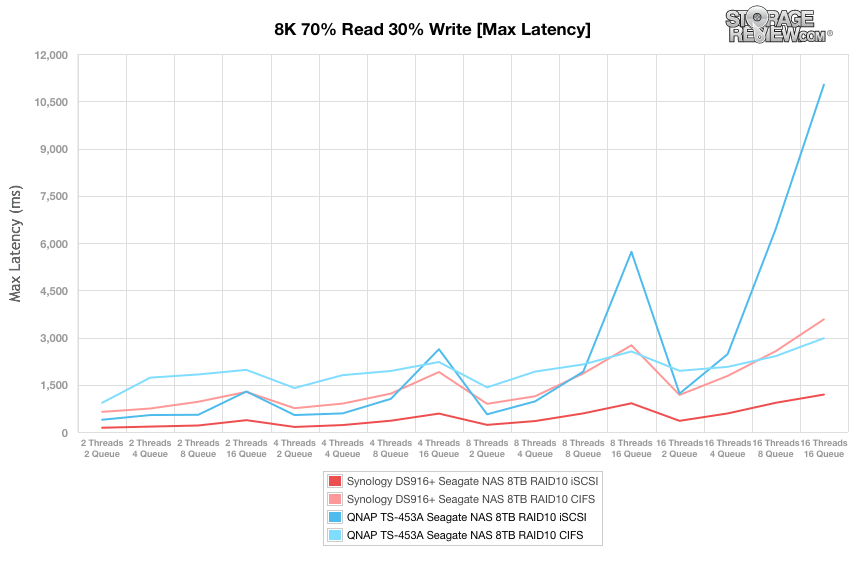 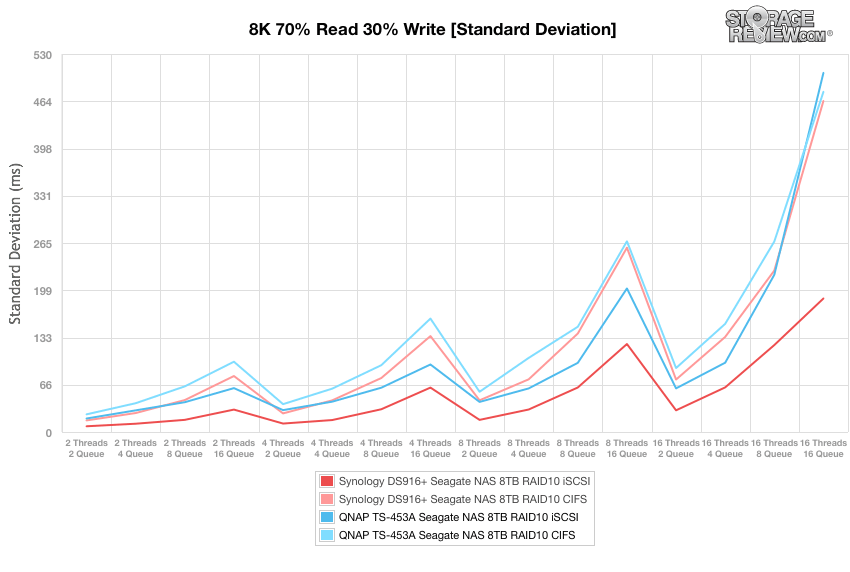 Our last test in our small NAS Synthetic Workload testing is the 128k test, which is a large block sequential test that shows the highest sequential transfer speed. When looking at the 128k performance of 100% write and 100% read activity, the QNAP TS-453A boasted double the speed of the Synology devices in both file- and block-level tests. The top performing QNAP NAS posted an impressive 425.80MB/s read and 449.28MB/s write (iSCSI), while the DS916+ posted 231.23MB/s read and 226.62MB/s write for its best performing configuration (CIFS).

The TS-453A is a 4-bay server that brings QNAP's suite of NAS features to Linux's open-source platform. The unique combination of a comprehensive server with Linux compatibility holds special appeal as IoT technology becomes more popular, especially since this type of NAS isn't especially prevalent among other brands. QNAP's QTS operating system provides access to existing IoT applications through the QTS App Center, which would come in handy for businesses that rely on the use of IoT technology. QNAP also invested in the entertainment features of the TS-453A by including a video transcoder (with real-time and offline 4k transcoding), two HDMI ports, and their OceanKTV karaoke app (along with two 1/4" microphone ports). The TS-453A uses RTRR and rsync protocols for backups, and third-party cloud service compatibility (e.g., Amazon S3, Microsoft Azure, Dropbox).