We choose to use IGEL Workspace as IGEL is one of the oldest, and largest VDI client suppliers, it supports all major VDI protocols, comes with an OS, and its VDI client software requires minimal hardware resources. IGEL was founded in Germany in 2001, has over 2 million VDI clients in use and is used by over 17 thousand companies worldwide. IGEL Workspace requires an Intel compatible 64-bit CPU, 2 GB RAM, 2 GB mass storage space (≥ 4 GB recommended), Intel, ATI/AMD or Nvidia graphics chip, USB 3.0 or 2.0 port, or DVD drive from which the device can boot, and an Ethernet or wireless adapter. IGEL Workspace does a bare metal install so any data on the system that you are installing it on will be destroyed. We feel that IGEL Workspace’s hardware requirements make it an ideal candidate for the Intel NUC7CJYS.

IGEL Workspace is composed of IGEL OS, IGEL Universal Management Suite (UMS), a multimedia Codec pack, PCoIP client, high availability functionality and a REST API. IGEL Workspace does need to be licensed but you can get a 90-day trail licenses for the product.

The hardware that we will be installing it on is a Intel NUC (Next Unit of Computing). The NUC is a small form factor computer that just contains the bare essentials for computing, but that isn’t to say that NUCs cannot be powerful computers – Intel can, in fact does, pack a lot of power on a 4” x 4” motherboard. For example, the NUC8i7BEH that we used as a Kubernetes server has a quad-core i7 processor, two internal drives, and supports 32GB of RAM. However, as we were looking to create a low-cost VDI client, we opted to use the less expensive NUC7CJYS.

The NUC7CJYS is a low-priced NUC geared towards supporting users that don’t need the power of Intel’s more powerful NUC offerings. The NUC7CJYS is still very usable as it has 6 USB ports and is powered by a dual-core Intel Celeron J4005 processor with integrated Intel HD Graphics 600. It supports dual Ultra HD 4K displays via two full-sized HDMI ports. All of this is packed into a lithe 4.5” x 4.5” x 2” case. To see more information on the NUC7CJYS you can read our review on it here.

First Boot and Configuring the NUC as a VDI Client

Before powering on the device, we connected the NUC7CJYS to a Dell UltraSharp 32” 4K Monitor (U3219Q) via HDMI. The Dell monitor has a keyboard, mouse, and video (KVM) switch built into it. The monitor’s built-in KVM switch was extremely useful during our testing as it allowed us to switch between the VDI client and our laptop with the push of a button. We used a Dell wireless keyboard and mouse (part number KM636) throughout our testing. We plugged the keyboard/mouse’s dongle into the monitor’s upstream USB port.

We downloaded IGEL Workspace by going to https://www.igel.com/software-downloads/igel-workspace-edition/, clicked on OS 11, clicked OS Creator, and then clicked OSC_11.01.100.zip. This brought up a pop-up form that required a name, company, email address and country. We filled out the form and downloaded the 1.7GB zip package. 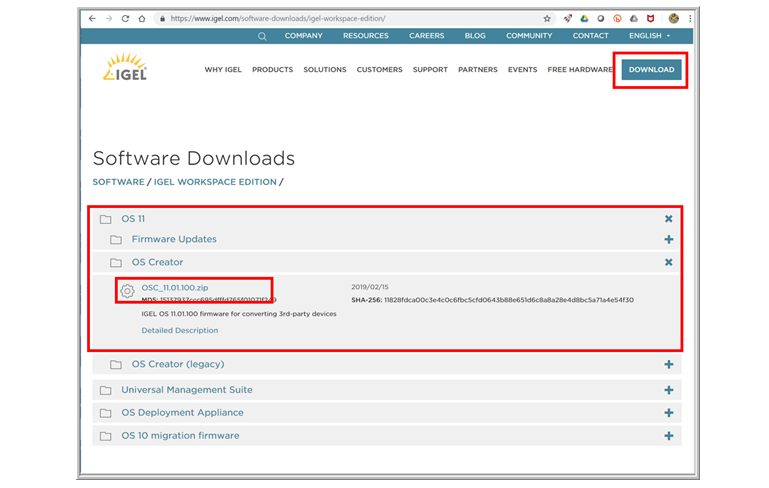 We extracted the files from the zip archive. The extracted files had a folder labeled preparestickwhich held various files. We plugged a 16 GB USB thumb drive into our laptop and then double-click preparestick.exe, which brought up a dialog that allowed us to create a bootable thumb drive.

We powered on the NUC and it up booted off the thumb drive. We were given the option to do a standard, verbose or failsafe install, we chose standard. 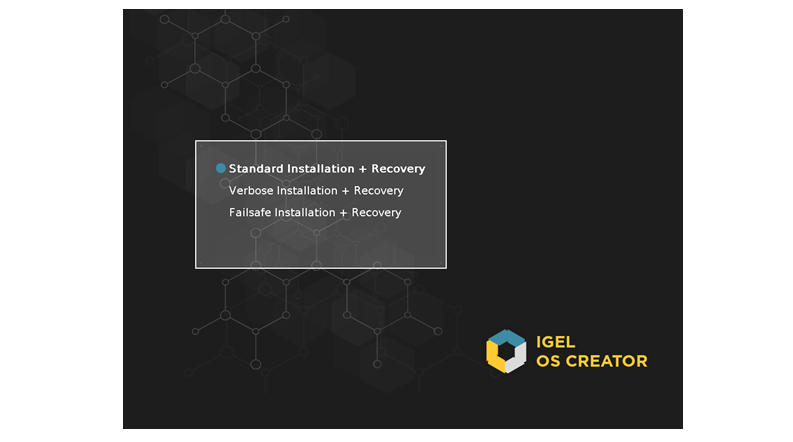 We were presented with a few options and then the firmware began to be installed. 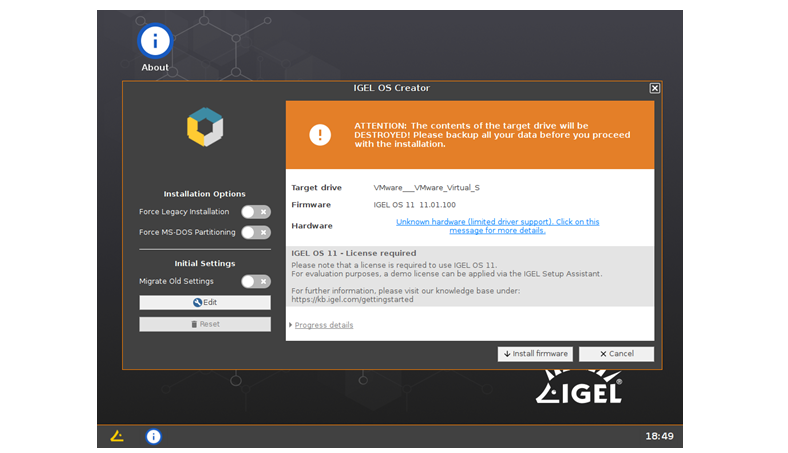 In less than five minutes we were presented with a message that indicated that the firmware was installed, a license would be required and that we needed to reboot the machine, which we did. 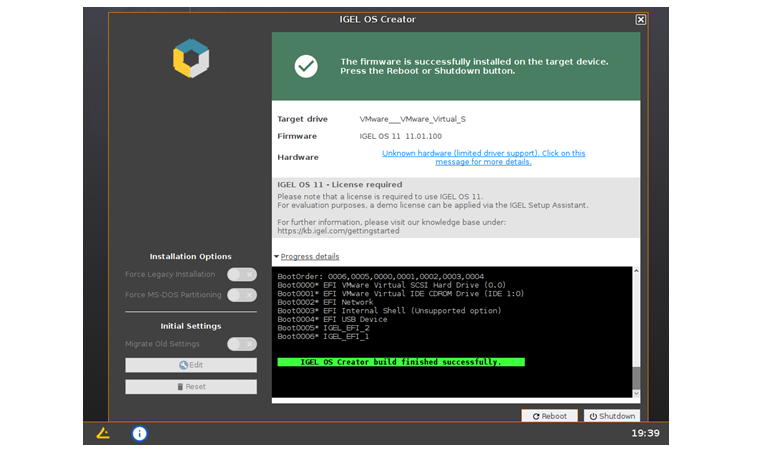 After the machine rebooted we were presented with a wizard that allowed us to configure the Language, keyboard, etc.. During the configuration process we were given the option on how we would like to license the device. We chose to get a 90-day demo license and were presented with a form that wanted are name, company, etc., and then were told that “your license has been fetched”, and was then informed us that the device needed to be rebooted.

After the system rebooted we clicked the IGEL Setupicon (wrench) on the left side of the task bar, clicked Horizon Client> Horizon Client Sessions, and clicked the +. This allowed us to setup a connection to our Horizon connection broker. Horizon can use RDP, Blast or PCoIP for the connection protocol. The Horizon client was 4.10. 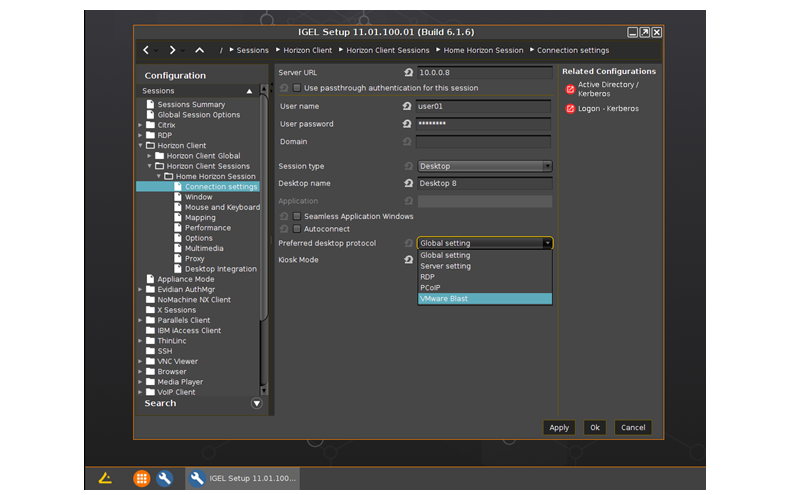 The virtual desktop that we used ran Windows 10 (1607), had 2 vCPUs, 8 GB of memory, and 50 GB of NVMe-based storage, and was hosted on a local vSphere server. For our testing we set the virtual desktops display size to 1600 x 1200 as we felt that this would replicate the average users envirement.

To further test the device, we played two different videos at the same time. Both videos played without any jitter and the devices task manager showed that only about 10% of the devices CPU and memory was being used. The uptick in the CPU usage on the task manager was due to the VNC session that we used to take the screen capture. 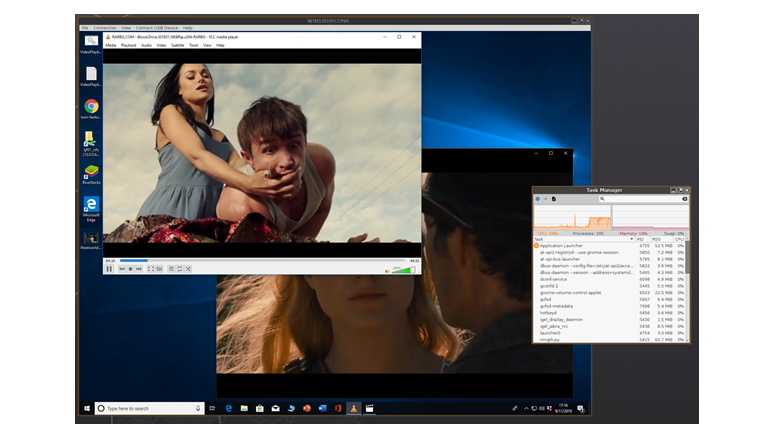 To further test the device, we connected a Jabra Voice 150 headset to a USB connection on the device. The Jabra headset was discovered by the virtual desktop and worked without any issues. 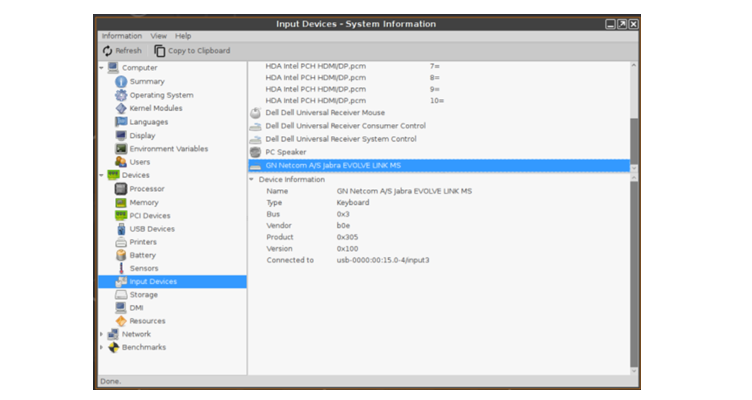 During the two weeks that we worked with the device, we used it for our various daily activities: using Microsoft Office applications, Chrome web browser, playing internet-streaming music, and other common tasks. During this time, the device performed without any issues. 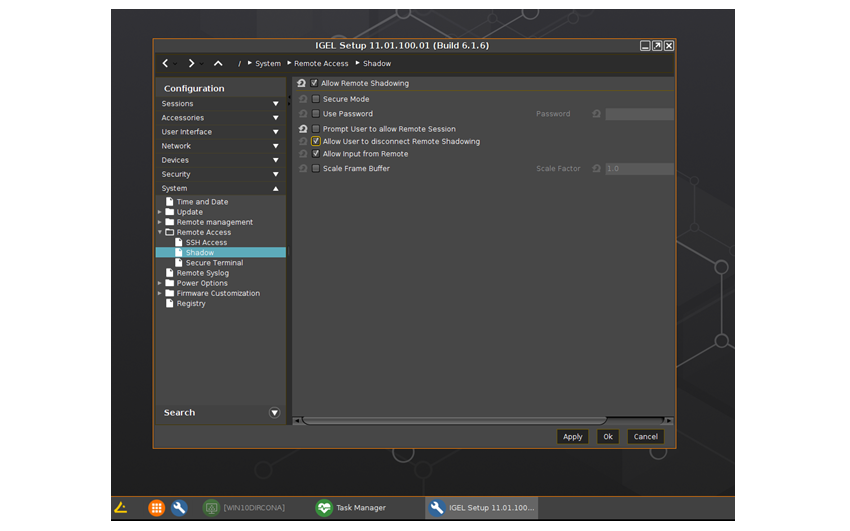 As this is a basic, rather than extensive, review of a VDI client, we only tested it using one VDI client protocol Blast with a Horizon desktop; we did not test the device for the following circumstances: using other display protocols (PCoIP, RDP, etc.), adverse network conditions, using multiple monitors, using communication software such as Skype, accessing local storage, or using the advanced features of the device.

The device can be used with IGEL’s Universal Management Suite (UMS), a tool that is used to manage multiple VDI clients from a single portal. Using UMS is beyond the scope of this review. 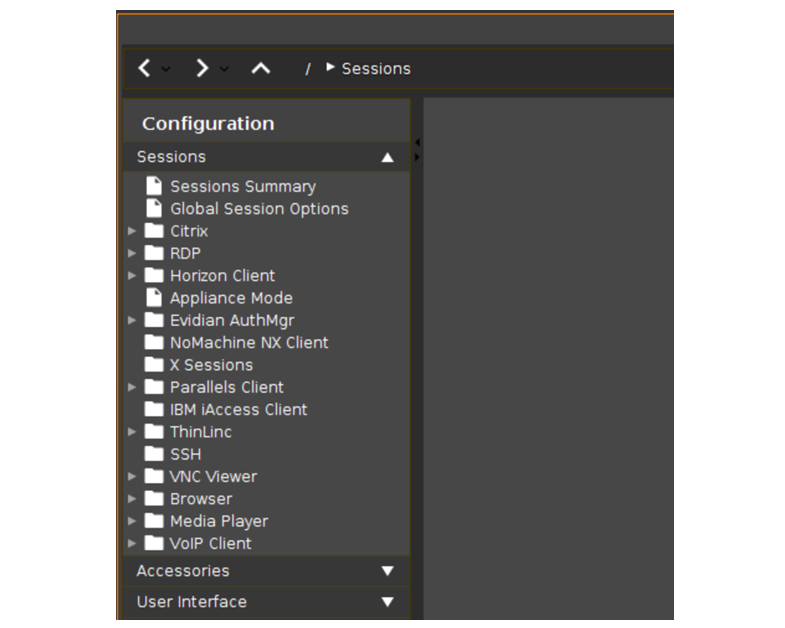 As this is a basic review of the device, we only tested it using a Horizon desktop; we did not test the device in the following circumstances: adverse network conditions, using communication software such as Skype, or using any of the advanced features of the device such as accessing local storage on the device from the virtual desktop or using it as a print server.

To access the devices settings, we clicked the settings (wrench) icon in the lower left-hand corner of the toolbar. 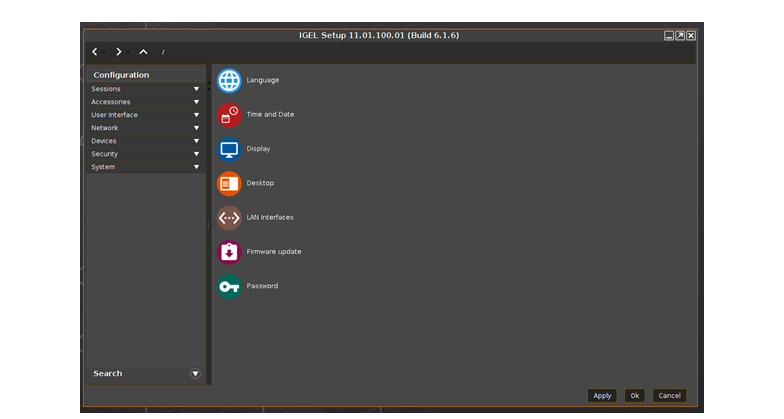 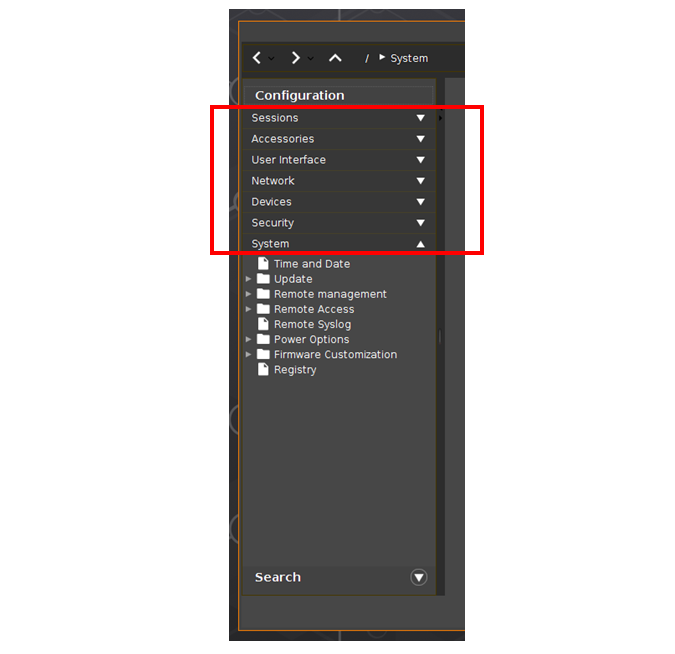 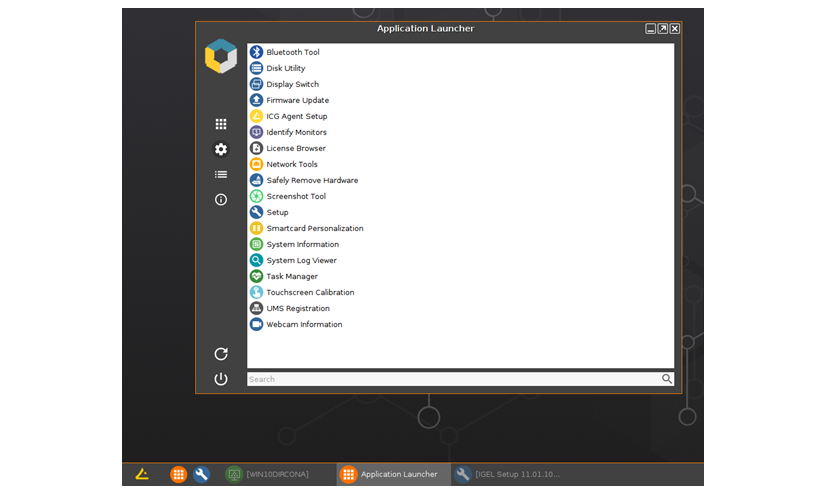 The sessions section had an icon that allowed us to connection to our Horizon virtual desktop. Settings had various tools that could be used to configure the device. The information section had information about the hardware and software on the device; we found this useful to get the IP address of the device.

One of the more interesting features that we found was underSystem Information> Benchmarking. This had benchmarking tools that you can run against the client. 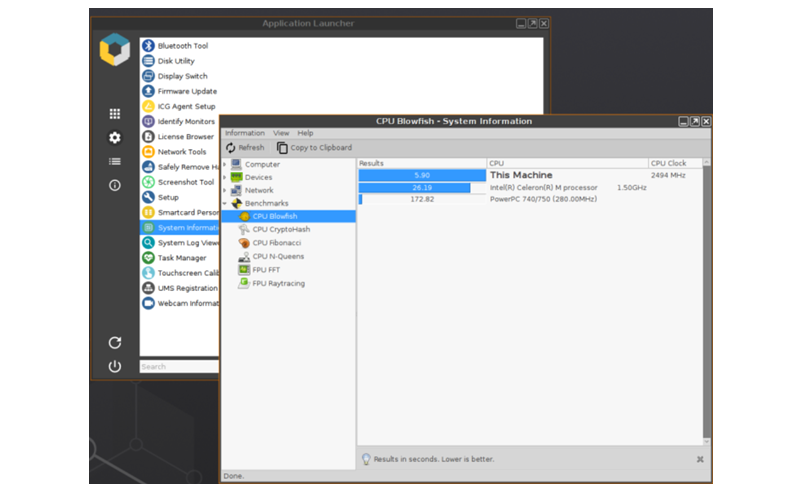 We were surprised by how well this small form-factor and low-priced computer performed as a VDI client. We were pleased with the polish and performance of IGEL Workspace and how capable it was as a VDI client. We have tested this NUC with another VDI solution that used MS Windows as the base OS and noticed that IGEL Workspace had better performance, this could be as IGEL uses a bespoken version of Linux that has been optimized to work as a VDI client rather than relying on a general purpose OS.

IGEL Workspace has a perpetual license and can be purchased through resellers for $125 with a $25 fee for yearly maintenance. One of the interesting features is that the license is portable, so it can be transferred to other devices if required.

The question is, does it make sense to “roll your own” VDI client? The answer, as it is with many questions in IT, is it depends. If you can get a NUC at a good price point or repurpose an existing PC, then yes—it maymake economic sense to build your own VDI client using IGEL Connector.

The NUC system that we used has an MSRP of around $300 USD, but its street price of is around $150 then adding another $125 for IGEL workstation would bring the total for this VDI client to $275, of course if you use a repurposed PC it would drop off the $150 needed for hardware. So, yes IGEL Workspace is an attractive option as a VDI client, and the Intel NUC7CJYS is powerful enough platform for tasks and knowledge workers.