In The Lab: ATEN 4K KVM Over IP Extenders

Today in the lab we are looking at something a bit different, but something that fits right in with our needs: ATEN 4K KVM over IP Extenders. These remote KVM Over IP Extenders are designed to allow displays or projectors to connect up with computers that are separated by distances greater than what direct-attached cables can support. The benefit to this technology is that it near universally compatible with equipment that support HDMI or DisplayPort connections, with USB for keyboard and mouse control. These extenders can support direct connection, allowing simple setup, or larger deployments where end-points can be remapped or managed through a central location.

Today in the lab we are looking at something a bit different, but something that fits right in with our needs: ATEN 4K KVM over IP Extenders. These remote KVM Over IP Extenders are designed to allow displays or projectors to connect up with computers that are separated by distances greater than what direct-attached cables can support. The benefit to this technology is that it near universally compatible with equipment that support HDMI or DisplayPort connections, with USB for keyboard and mouse control. These extenders can support direct connection, allowing simple setup, or larger deployments where end-points can be remapped or managed through a central location.

ATEN has an entire line of KE KVM over IP extenders as well as its KE Matrix Management software. So, what sets ATEN products apart? For starters, there is no distance restriction, ideal for large buildings or campus locations. As the name implies, the extenders have up to 4k (3840×2160 @ 30HZ) at up to 24-bit color and fast switching between resolutions. ATEN KE extenders can switch between receivers intuitively in larger deployments as well.

Our hands-on video is here:

For large deployments, the biggest benefit of ATEN 4K KVM Over IP Extenders is in the form of is strong centralized management, KE Matrix Management Software. The Management software enables simple orchestration through an easy to use, yet powerful GUI. We’ll dive deeper into the software below.

Looking at the hardware there are three main models. This is further broken down by each model having a transmitter (T) and receiver (R). The model and pricing are as follows:

The ATEN KE8900S is the cost-effective model and is also known as the Slim HDMI KVM over IP extender. About the size of a trade paperback book, the KE8900S can fit on most desktops without taking up much space, though it comes with mounting options as well. The mounting options are more important on the transmitter side where it can be mounted in a rack (with 0U mounting options).

As the sub title implies, this is the HDMI model. The KE8900ST supports HDMI video input from the computer while the KE8900SR supports one HDMI monitor output. This gives users resolutions up to 1920 x 1200. The KE8900S offers lossless video compression quality with minimal latency while also supporting Virtual Media function and RS-232 serial commands. 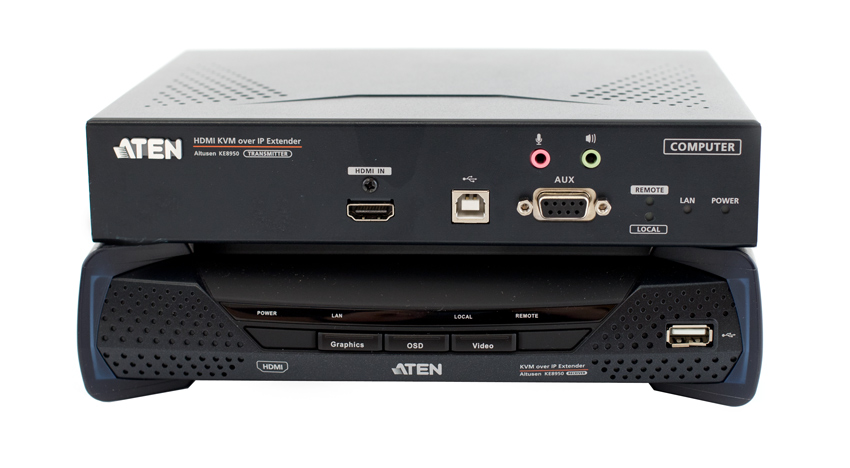 Next up in the batch of extenders we have is the KE8950/KE8952. Not really a midrange, but it is the first 4K extender we’ll look at here. In fact, its name is the KE8950/KE8952 4K HDMI KVM over IP Extender. Touted as allowing access to a computer system from a remote USB console to anywhere over an intranet, the KE8950/KE8952 are HDMI-based though this time they support up to 4K resolution (2K is supported as well). Unlike the KE8900S, this level of extenders comes with the option of 1Gbps SFP fiber module expansions. Fiber optic network transceivers enable long-range usability, measured up to tens of miles, between point to point connections. The KE8950/KE8952 also supports PoE eliminating the need for power adapters on either side of the setup. 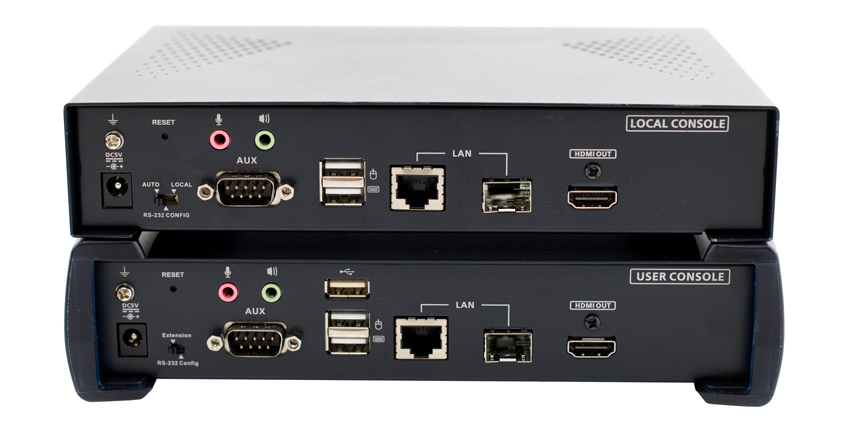 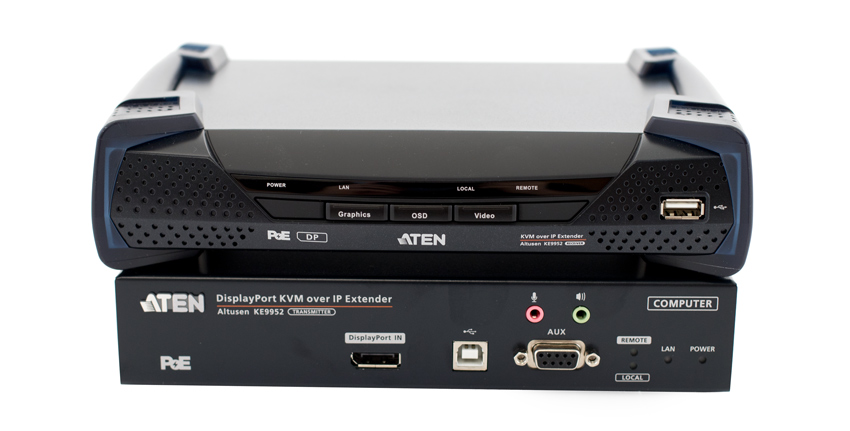 The last set of hardware we are going to look at is the ATEN KE9950/KE9952. The full name here is ATEN KE9950/KE9952 4K DisplayPort Single Display KVM over IP Extender giving us a good idea right up front what we are in for and how it will be used. Obviously, this extender set leverages DisplayPort for up to 4K resolution. As with the above, the KE9950/KE9952 supports flawless and lossless video compression quality with extremely low latency.

For connectivity the KE9950/KE9952 leverages RJ-45 as well as having an SFP slot for 1Gbps connections. The transmitter and receiver can be directly connected to each other or over a copper-based or fiber-based LAN. While these models support PoE also, they also come with dual power supplies for added redundancy. These extenders are still small enough to fit on a work station but have mounting options as well.

While the hardware is interesting and has obvious benefits, the real magic happens in the software, like most things. Leveraging a GUI for ease of use, the ATEN KE Matrix Management Software gives users all the tools they need to centralize the control and management of KE series devices in their IT environment. ATEN claims the GUI is intuitive, which means less training and thus higher productivity. The GUI offers a multilingual interface. This is ideal for control centers, such as for Air Traffic Control.

The software lets one do all the things expected with type of device: configure, administer, control, and maintain all KE series devices. It also provides advanced features for username and password authentication, user authorization and auto-detection of all devices. And of course the main point of the software is to allow one-to-one, one-to-many, many-to-one and many-to-many TX/RX connections.

Other benefits of ATEN KE Matrix Management Software include:

After the hardware is where it needs to be and the software is successfully installed, we’re ready to dive into usage. After logging in directly to the CCKM through the browser setup, users are brought to the main dashboard. Here users can add TX’s / RX’s by clicking the + sign on the top right.

Once one clicks the +, they can search for Transmitters and Receivers to add. 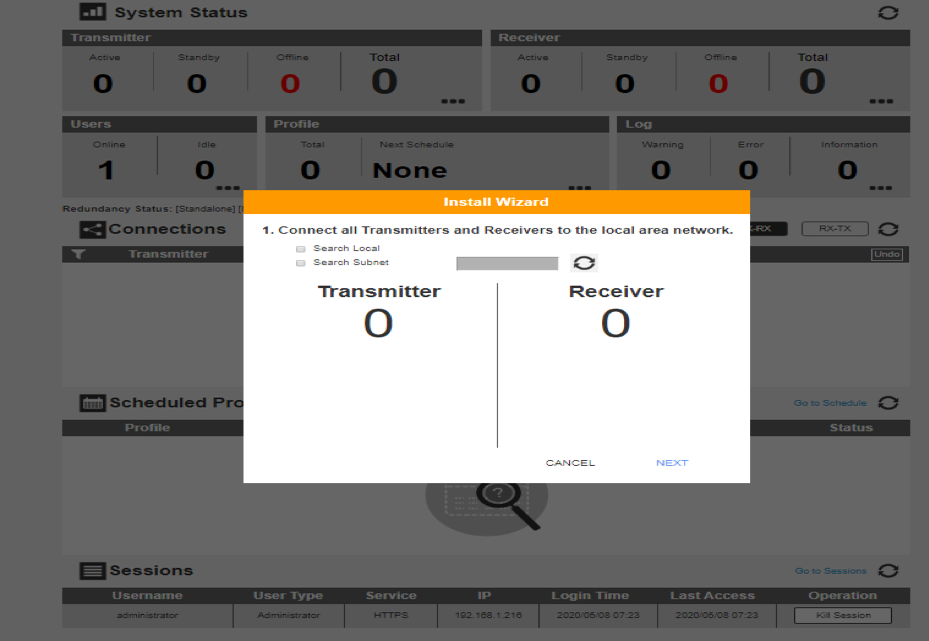 After adding the desired transmitter and/or receivers users can configure the devices as needed.

Once the transmitters and receivers are added and configured, users have the option of adding other devices such as virtual TX’s, Transmitter Groups, Receiver Groups, and create a video wall scenario.

With adding any of the options users also have the option of Boundless Switching. 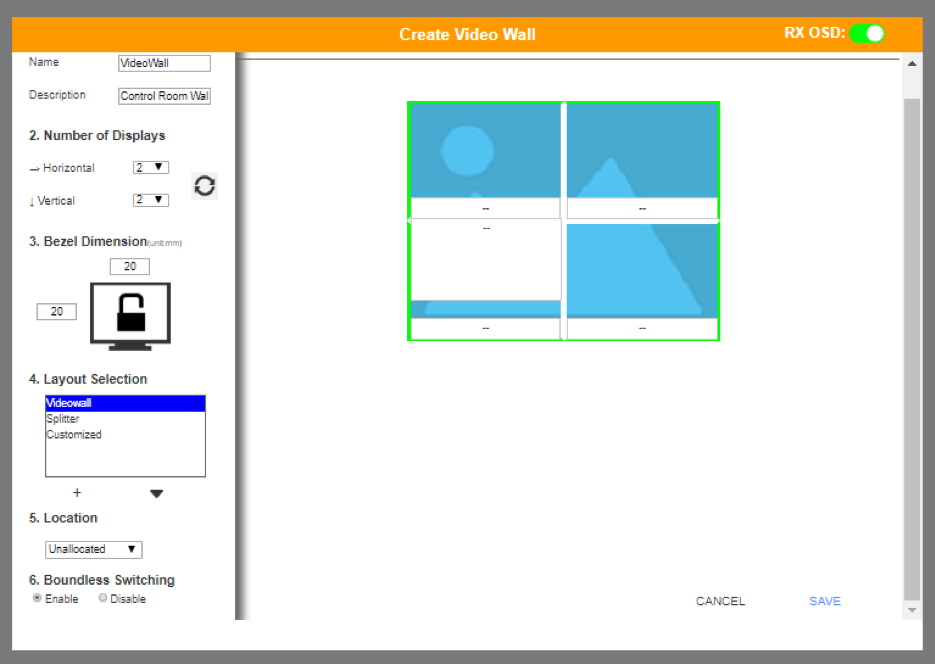 For enterprise and retail deployments of monitors, displays and billboards, ATEN has a number of easy to deploy solutions to almost every scenario of video interconnect and networking backend. In our lab the ATEN transmitters and receivers connected instantly to one another with virtually no fuss, requiring minimal work for a point to point link. Obviously larger deployments can also be centrally managed, for which ATEN offers their CCKM KE Matrix Management suite. Overall the ATEN KVM over IP Extender suite of products offers a solution for almost every long-distance display need, with the management software to bring it all together.