The Optane 800P is Intel’s latest storage product for end users. This new M.2 NVMe SSD is equipped with 3D XPoint memory and storage controllers and is designed for fast application loading, RAID configurations, and fast boot for mobile and desktop platforms. In this new SSD release, Intel has put its toe in the water with Optane Memory technology again, which is designed to accelerate slow storage and deliver faster responsiveness.

The Optane 800P is Intel’s latest storage product for end users. This new M.2 NVMe SSD is equipped with 3D XPoint memory and storage controllers and is designed for fast application loading, RAID configurations, and fast boot for mobile and desktop platforms. In this new SSD release, Intel has put its toe in the water with Optane Memory technology again, which is designed to accelerate slow storage and deliver faster responsiveness. 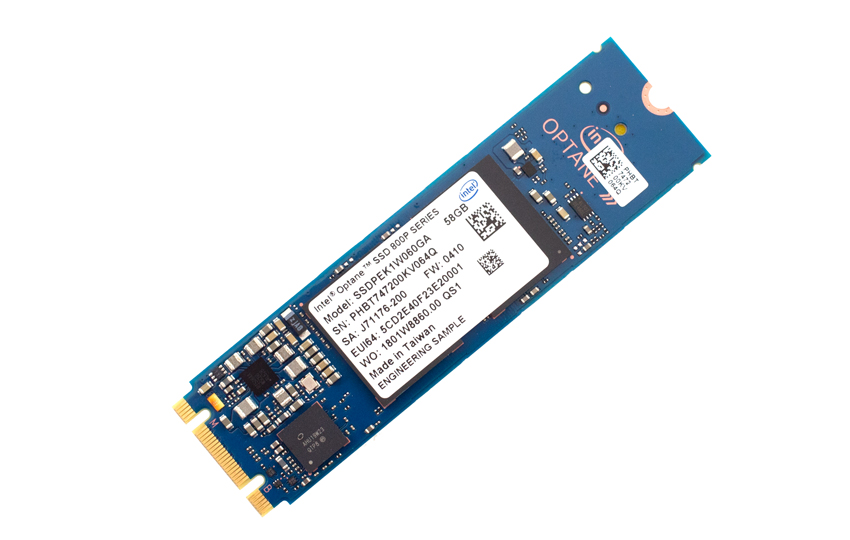 As far as performance goes, the 800P is quoted to deliver up to 1.45GB/s and 640MB/s in sequential reads and writes, respectively, as well as up to 250,000 IOPS and 140,000 IOPS in random reads and writes, respectively. Interestingly enough though, the 800p comes in capacities of only 58GB and 118GB (priced at $129 and $199) so end-users will mainly use it as a place to store something that uses ultra low latency and needs high performance, such as swap file location or a scratch space for write-intensive workloads.

The Intel Optane 800p is of an M.2 80mm (2280) single-sided form factor, which is smaller than a stick of RAM. One of the sides of the SSD has the NAND packs and controller, the former of which is covered by a sticker that displays important information such as name, model number, and capacity. 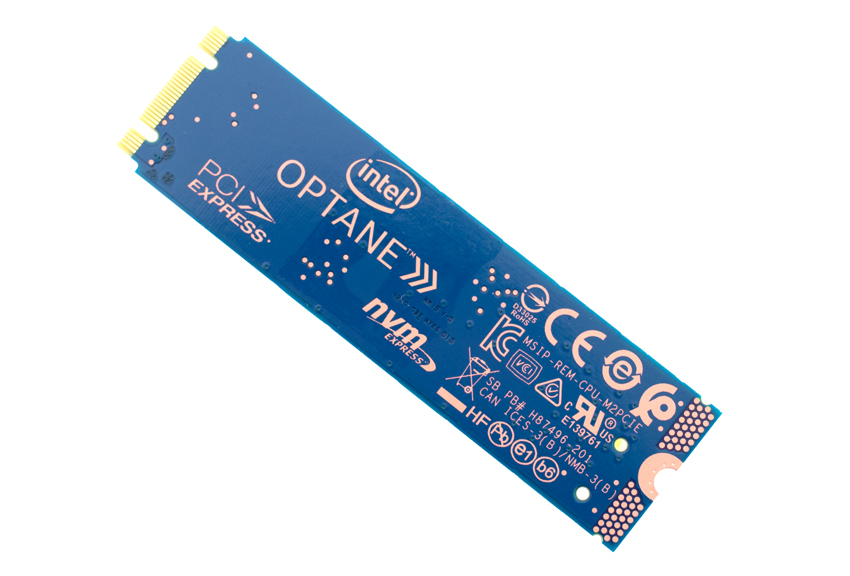 The other side is a blank blue PCB with imprinted branding and a range of other information.

StorageReview has rolled out an updated assortment of tests for end-user SSDs, which are designed to look more at IOPS or throughput in relationship to latency. These benchmarks have been honed at a much larger scale for enterprise drives; for client SSDs, we decrease the loads to more common workload sizes. Testing is done on a bare-metal Dell PowerEdge R740xd running Ubuntu 16.04.03. Each drive is filled fully with sequentially written data, then partitioned to test a section spanning 5% of the SSD. This is to mimic a smaller data footprint generally seen with consumer workloads.

While not a perfect representation of actual workloads, synthetic tests do help to baseline storage devices with a repeatability factor that makes it easy to do apples-to-apples comparisons between competing solutions. These workloads offer a range of different testing profiles of common transfer sizes. We’ve also included new VDI workload profiles. With local hypervisors installed such as VMware Fusion, Parallels or even ESXi, many end users are starting to see I/O workflows similar to a multi-tenant environment. This is especially true for heavy users that run several apps and browser tabs simultaneously.

In our first VDBench Workload Analysis, we looked at random 4K read performance. Here, the Intel 800p 58GB and 118GB models were able to maintain sub-millisecond latency performance until 360,000 IOPS, both of which peaked at around 354,00 IOPS with a latency of 343μs. While the Samsung NVMe finished with higher peak IOPS, the Optane modules started at an impressive 14.9μs and stayed below 50μs throughout most of their run.

Random 4K write performance told a different story, however. The best performing 800p model was the 118GB, which performed significantly slower than the 960 Pro with sub-millisecond latency performance throughout its run, peaking at 147,500 IOPS with 824μs latency.

Moving to sequential performance, we looked at our 64K benchmarks. In reads, the Intel 800p maintained sub-millisecond latency throughout our test and peaked at 22,154 IOPS (1.38GB/s) and 22,643 IOPS (1.41GB/s) for the 118GB and 58GB, respectively. Again, the Intel drives were able to maintain significantly lower latency than the 960 PRO throughout the majority of this test, starting at 74.1μs, roughly half as much as the Samsung.

In sequential 64K write, the 58GB and 118GB Intel drives showed identical performance, maintaining sub-millisecond latency until roughly 9,771 IOPS with a peak of 9,827 IOPS (615MB/s) or and a latency of 1.6ms. Here, the 960 PRO gave better peak performance and lower latency.

Next, we looked at our VDI benchmarks, which are designed to tax the drives even further. These tests include Boot, Initial Login, and Monday Login. Looking at the Boot test, the 58GB model had the best performance in the 800P line with a sub-millisecond latency throughout the entire test, peaking around 95K IOPS. As you can see from the chart below, the 58GB and 118GB models had (again) significantly lower sustained latency throughout, starting as low as 29.7μs and staying below 100μs until around 86K IOPS.

For the VDI Initial Login, the 58GB and 118GB model recorded near identical performance with a sub-millisecond latency throughout the entire test once again. Both drives also peaked at a 38,550 IOPS and 770μs.

For the final VDI Monday Login, the Intel 58GB and 118GB again had sub-millisecond latency performance throughout the entirety of the test and again with near identical performance, peaking at 37,829 IOPS with a latency of 416μs. Both capacities had lower latency than the Samsung drive up until roughly the 34,000 IOPS mark.

The Intel Optane 800P series is an M.2 NVMe SSD built specifically for PC and mobile use cases such as fast application loading, RAID configurations and boot times. The new line comes in capacities of 58GB and 118GB and has quoted performance of up to 1,450MB/s sequential read and 250,000 IOPs random read under specific conditions. As its name indicates, the 800P uses Intel’s new Optane Memory and leverages this technology in a more robust manner than its caching product released last year (Intel Optane Memory).

Looking at its overall performance, we found the Intel 800p to be a bit uneven at times; however, in certain tests such as 4K read and VDI boot, the latency of the Optane SSDs were dramatically lower than the best-in-class Samsung 960 PRO consumer NVMe M.2 drive. In random performance, both 800P capacities showed a solid peak read performance of 354,00 IOPS, with a sustained latency significantly lower than the 960 PRO throughout the test. In writes, however, the top performing 800P capacity (118GB) performed significantly slower than the 960 PRO, peaking at 147,500 IOPS with 824μs latency.

When moving to our multi-threaded 64K sequential read benchmarks, the Intel drives were able to maintain sub-millisecond performance throughout the test and peaked at 22,154 IOPS and 22,643 IOPS for the 118GB and 58GB, respectively. Again, the 800P drives were able to maintain significantly lower latency than the Samsung’s flagship SSD. In writes, the 58GB and 118GB Intel drives showed near identical performance, maintaining sub-millisecond latency until roughly 9,771 IOPS. Lastly, in our VDI tests, the 800P placed behind the Samsung 960 PRO in IOPS; however, it had much better latency again in our boot test and slightly better latency in our Monday login test up until the 34,600 IOPS mark.

Overall, the Intel Optane 800P showed incredibly strong, low latency performance. Even comparing it to something as powerful as the Samsung 960 PRO NVMe drive, the Optane was able to shine against this SSD in read and VDI performance. The 800P’s low starting price and low latency make it ideal for users that need a space to run applications requiring ultra-low latency, or use cases where it’s leveraged as scratch space, which demands higher endurance. The capacity isn’t quite there for Optane to be a full system-wide SSD replacement, but one would think that the time is coming soon.

The Intel 800P is a cost-effective, and extremely low latency drive for users of applications that demand such low latency.