Announced at CES this year, Intel Optane Memory H10 is the marriage of two technologies that brings Optane performance in a higher capacity SSD, without the higher associated costs. Intel Optane flash and Intel QLC 3D NAND are combined on a single M.2 2280 form factor in a hybrid storage configuration. Optane brings the performance for end user workloads, while QLC brings affordable capacity.

Announced at CES this year, Intel Optane Memory H10 is the marriage of two technologies that brings Optane performance in a higher capacity SSD, without the higher associated costs. Intel Optane flash and Intel QLC 3D NAND are combined on a single M.2 2280 form factor in a hybrid storage configuration. Optane brings the performance for end user workloads, while QLC brings affordable capacity.

The Intel Optane Memory H10 is aimed at the consumer market (through OEMs) with gamers, media and content creators, professionals, and just day-to-day users in mind. The M.2 form factor makes the drive an ideal choice for ultra-thin notebooks or space limited desktops. The Optane part will do what it is best at, i.e. low latency and high performance with mixed random read/write speeds at low queue depths. QLC is not known to be a terribly high-perfomant type of NAND, but it will allow for the expansion of capacity at a lower cost and a smaller footprint.

To make this hybrid configuration work, Intel is leveraging its Rapid Storage Technology (Intel RST) driver. This driver works behind the scenes on the H10 to remember frequent content and accelerating said content. This will give users a bump in performance for the applications and data they use most frequently and it is able to adapt and change over time if users’ habits and use changes. RST is critical for the H10 as it enables Optane to absorb the heavy lifting of handling most reads and writes, protecting the QLC from demanding activities.

From a performance profile this means the H10 is capable of sequential read/write of up to 2400MB/s and 1800MB/s respectively. As noted, Intel expects most activity for end users to be in the very low queue depths where the Optane Memory can do the work, even with its limited capacity. As such they’ve quoted 4KB random read and write IOPS of 32,000 and 30,000 at a queue depth one. Moving to queue depth two, they see 55,000 IOPS in both read and write activity. In practical terms, Intel translates the performance story for the H10 into claims end users can understand. Compared to a TLC SSD, the H10 is said to open productivity applications 2x faster while multitasking. The H10 also offers up to 90% faster large media file opening while multitasking as well as 60% faster game launches while multitasking. 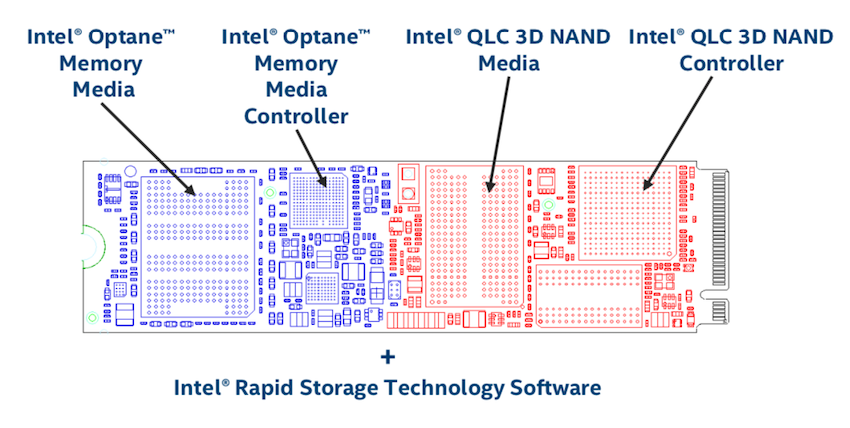 The Intel Optane Memory H10 with SSD is available in three capacities. The 256GB capacity features 16GB of Intel Optane Memory while the 512GB and 1TB capacities both include 32GB. From a support standpoint, the drive is designed to be sold as part of platforms from major vendors like HP, Dell, Asus and others. Requirements include 8th Generation Intel Core U Series CPU, RST 17.2, PCIe-based M.2 slot (PCIe 3.0×4 with NVMe) and Intel 300 Series Chipset On-Package PCH. While less of a concern as a system component, Intel does back the H10 with a five-year warranty and up to 300 TBW endurance.

Intel Rapid Storage Technology (Intel RST) has a few interesting features as it relates to the H10. Opening up the driver we see main tabs such as Status, Manage, Intel Optane Memory, Performance, Preferences, and Help. Under Status we see the status of the drive with information such as whether it is functioning normally, whether Optane is enabled or disabled, and the capacity of both Optane and QLC. 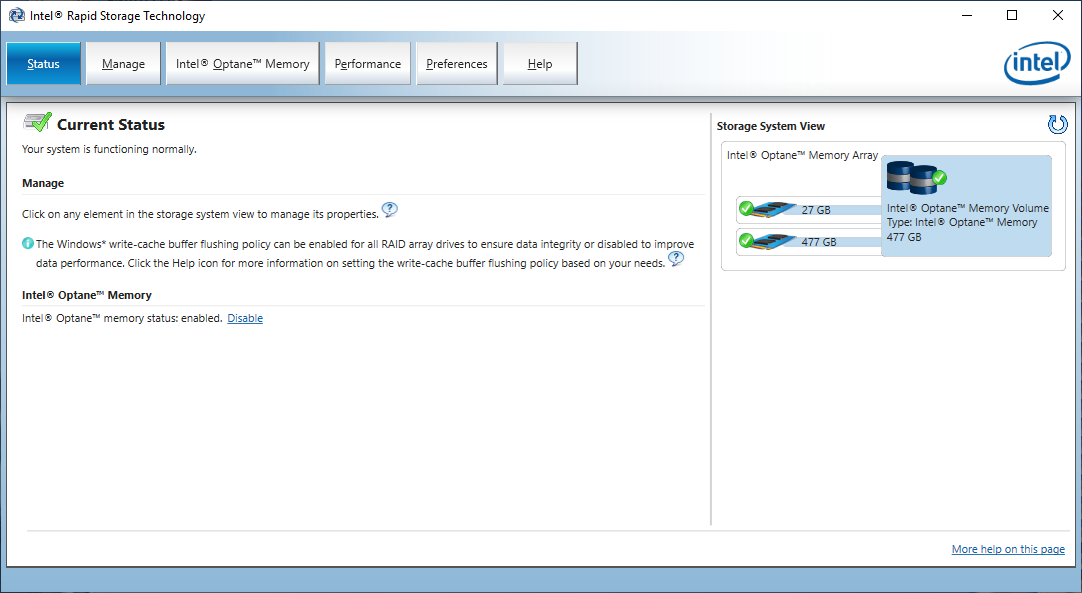 Manage allows us to drill down deeper in either the Optane or QLC disk. 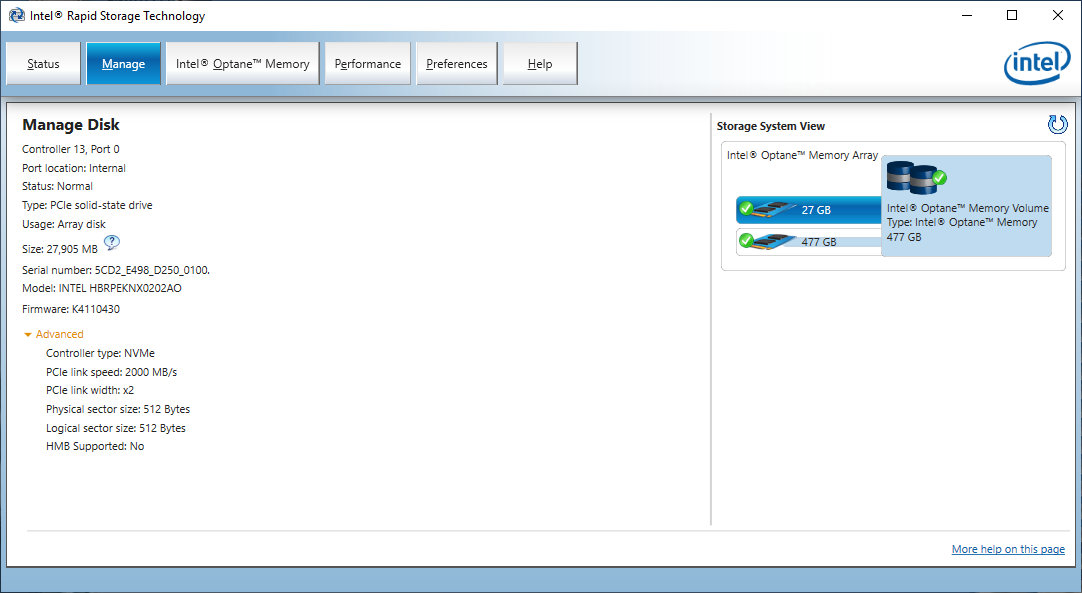 The Intel Optane Memory tab allows user to enable or disable the Optane memory (which can vary depending on ones needs). This tab also allows user to pin files, folders, or applications for specific performance boosts to those that are pinned. 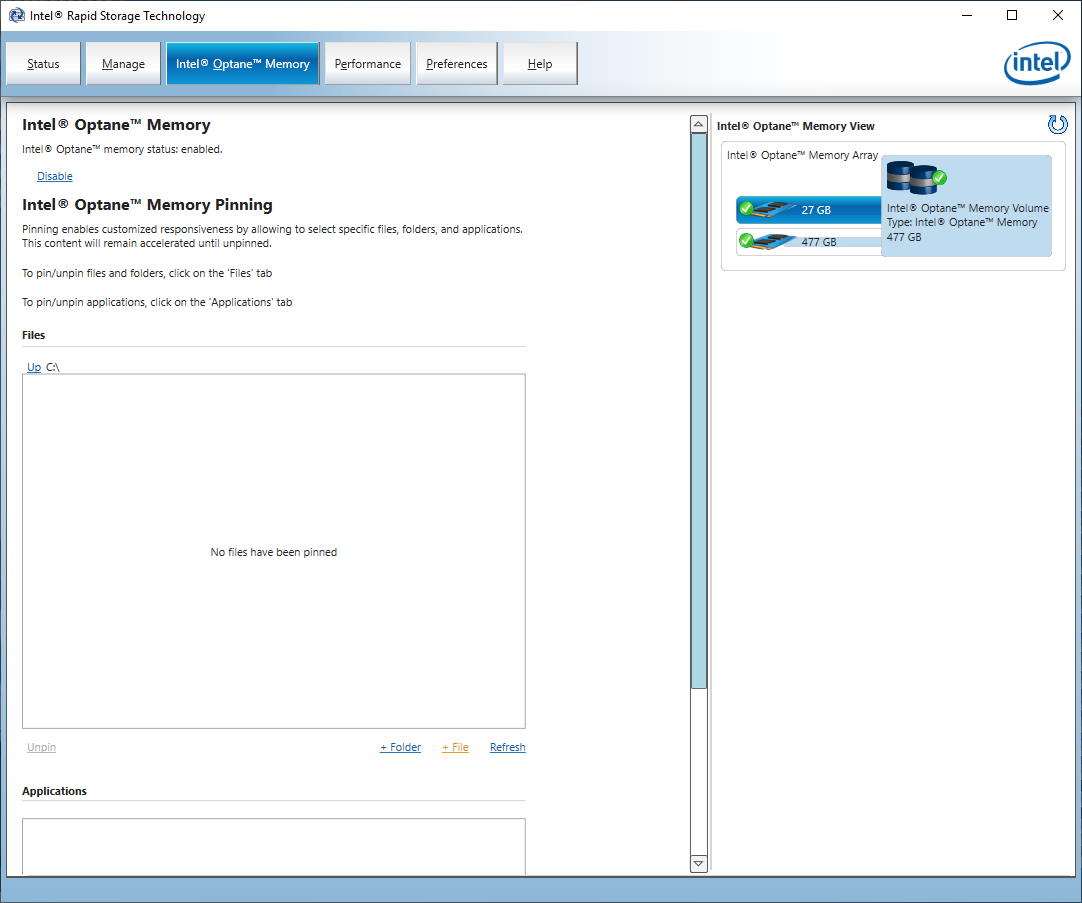 To understand the background of why a product merging QLC NAND alongside Intel Optane exists, it is important to understand the background of how QLC NAND performs through certain workloads. QLC NAND is great for read operations, and very quick burst write workloads with a dynamic SLC-NAND space. Write workloads that transfer more than 15-20GB of data at a time though will move the drive to a pain point where write speeds will drop dramatically. TLC and MLC NAND don’t have this problem, so for a more mainstream product based around QLC NAND, Intel Optane enters the equation to rebalance the scales. Intel Optane memory is great for write operations, offering fantastic low-queue depth small-block transfer speeds. Its only true downside is cost, hence where a product such as the Intel Optane H10 product comes about, merging QLC NAND and a little bit of Optane Memory in a hybrid offering.

Our performance testing in this review is a bit different as the H10 is not a normal SSD, but rather two different drives on one M.2 card unified by Intel RST. Since the H10 can only work with the latest CPUs, Intel has provided us with an HP Spectre x360 in order to run our benchmarks. As opposed to running the Intel Optane Memory H10 against other drives, we ran four different tests including Disabled 1Q (D1Q), Disabled 2Q (D2Q), Pinned 1Q (P1Q), and Pinned 2Q (P2Q). Essentially disabled results are only hitting the QLC component of the drive and pinned results are only hitting the Optane Memory portion of the H10. The point is to show Optane Memory performance, while also showing what will happen for uncached activity that may end up hitting the QLC component of the drive. 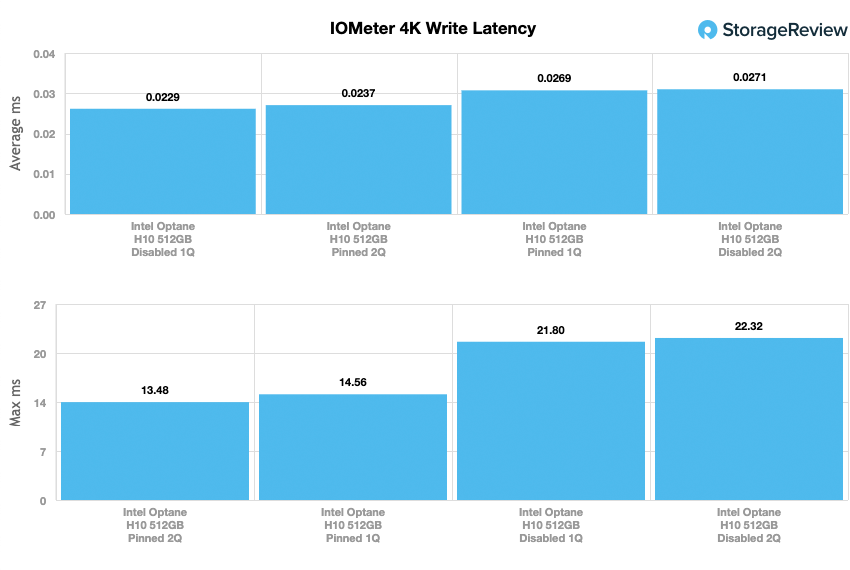 Looking to offset the write performance limitations of QLC NAND, Intel has come out with its Optane Memory H10, which combines the technology of Intel Optane Memory (high-performance) and Intel QLC (cost-effective capacity) on a single M.2 SSD. The drive uses the NVMe interface and is supported by 8th and 9th Gen Intel Core CPU-based platforms (or newer). The H10 is aimed at consumers that want the Optane performance bump without giving up capacity or paying a high-performance premium. Its design is very similar to past hybrid storage technologies that paired flash with hard drives, although now it’s a combo of low cost, high capacity flash and low capacity, high performance flash. This blended storage product’s ultimate goal is to offer a similar quality user experience to a standard SSD, at a lower price while hitting similar capacity points.

In terms of functionality, the end user never has to know the notebook has two discrete SSDs. The H10 will come as part of complete solutions from major brands like HP, Dell and Asus. Since Intel RST software handles the caching of data in the background without any fuss, there’s not any intervention that’s required by end users. RST can operate entirely on its own, but more advanced users can pin specific applications or files to the Optane Memory component depending on what their needs are.

Looking at performance the H10 behaved quite well when the write performance limitations of the QLC SSD were shielded by Optane Memory. The main drawback we found is users will miss out high-bandwidth write operations with the QLC portion of the drive topping out at under 1GB/s and the Optane component dropping out at under 400MB/s. For most users of the Optane H10 this will probably never be a concern though since all other activities that focus around burst read workloads or low queue depth workloads perform very well.

The Intel Memory Optane H10 offers good performance along with the promise of affordable capacity. Looking at alternatives, a standard QLC SSD offers high capacity at low cost, but has the tradeoff of low write speeds under heavier workloads. TLC SSDs offer stronger performance with high capacity, but at a higher price point. The Intel Optane H10 aims to slot somewhere in between. Ultimately though, it comes down to price. If Intel rolls this out competitively priced, the H10 makes a nice option for most mainstream users. If the price point is too high, either by SSD cost or the required system configurations, the traditional SSD may be more attractive.