Optane Memory, formally 3D XPoint, is utilizing the first new class of NAND in nearly 25 years. The Optane Memory PC-caching solution works with Intel’s new 7th generation Intel Core processors and systems that support it, to accelerate large capacity HDDs. Coming in 16GB and 32GB modules, Optane Memory is packaged in an M.2 SSD that users can add into desktop systems. When paired with its software, Intel claims up to 28% faster overall system performance, 14x hard drive access, and 2x the task responsiveness.

In July of 2015, Intel and Micron jointly announced the new NAND technology that claimed to have 1,000 times the performance and endurance of current NAND technology. A few months later, Intel introduced its version, Optane, and toned down the performance and endurance numbers a bit, or actually a lot. Early this year, the company revealed that its Optane Memory product would act more like a caching agent versus a straight up replacement for SSDs. This would allow users to keep high hard-drive capacities in their desktops, but receive performance benefits one would normally associate with an SSD. 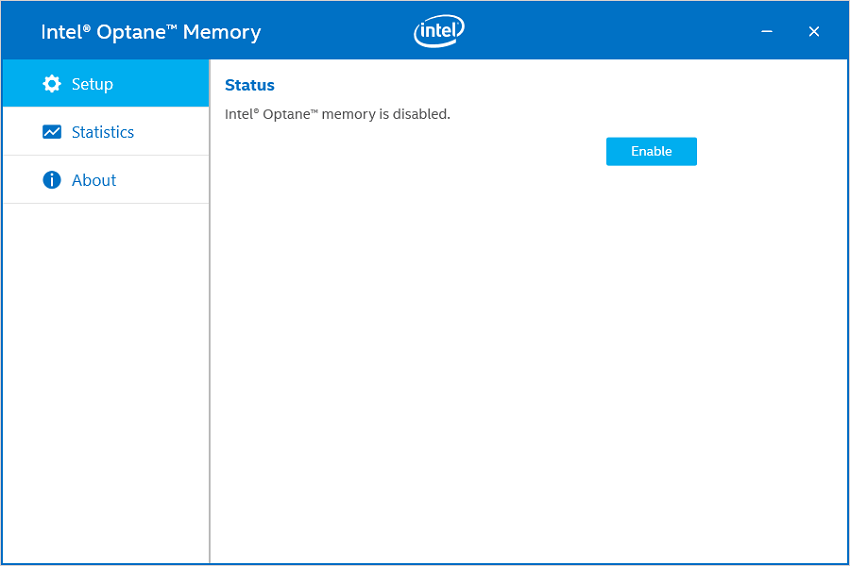 As a packaged solution, Intel Optane does present a number of problems that may impact overall adoption. Unlike an off-the-shelf SSD, Intel Optane can only be paired with new desktop motherboards that support it. Backwards compatibility isn’t in place, unlike legacy systems that are years old that can take advantage of a traditional SSD. The other problem it faces is cost; we are in a market period where 256GB SSDs cost less than $100 and 1TB SSDs can be easily purchased for less than $250. Gone are the initial market arguments where people are trying to decide which minimum-capacity SSD to choose for a boot drive. With the prevalence of streaming music and video, there is no longer a need to store such media freeing up even more space. And frankly SSDs are much larger than most people can fill up anyway. So when interested buyers are comparing the cost of an all-flash NVMe M.2 SSD upgrade versus completely buying a new system to take advantage of a small caching product with a hard drive, the Optane may hit the market and be outsold by its existing “legacy” offerings.

The Intel Optane Memory modules are shipping now priced at $44 for the 16GB and $77 for the 32GB. For our review we will be looking at the 32GB module.

The Intel Optane Memory SSD looks no different than any other M.2 drive. The PCB is blue in color and has two Optane NAND packs on one side (covered by a sticker with product information on it), and is blank on the other side.

Our typical performance testing would take place on our consumer-testing platform, an HP Z640 workstation. As powerful as this workstation is, it does not have Optane support, so our initial tests measured it as a 32GB SSD only, rather than as the intended caching solution. Though not a direct line comparable, the attributes of Optane Memory are similar enough for us to make the comparison to existing SSDs of the same form factor for perspective. These include:

In our 2MB sequential benchmark, the Optane Memory (referred to simply as Optane for the remainder of the performance section) hit 1,225.52MB/s read and 270.77MB/s write. This placed it behind many SATA drives on write and behind the top-end NVMe SSDs on read.

Looking at 2MB random transfer performance, the Optane placed a bit better, coming in sixth in reads with 1,252.42MB/s read and second-to-last once again in writes, with 273.90MB/s.

The purpose of our random 4K benchmark is to put more strain on the drives in terms of throughput. Here, the Optane gave the overall best read performance with 221.68MB/s–almost five times faster than the next-closest comparable. It once again placed second-to-last with writes having a score of 98.32MB/s.

The IOPS results of the same random 4K benchmark painted a similar picture. The Optane had the best read score by far with 56,751 IOPS and second-to-last write with 25,169 IOPS.

Looking at 4K latency, the Optane came in second-to-last in average latency with 0.0393ms. The module’s max latency clocked in at 2.369ms, placing it sixth. 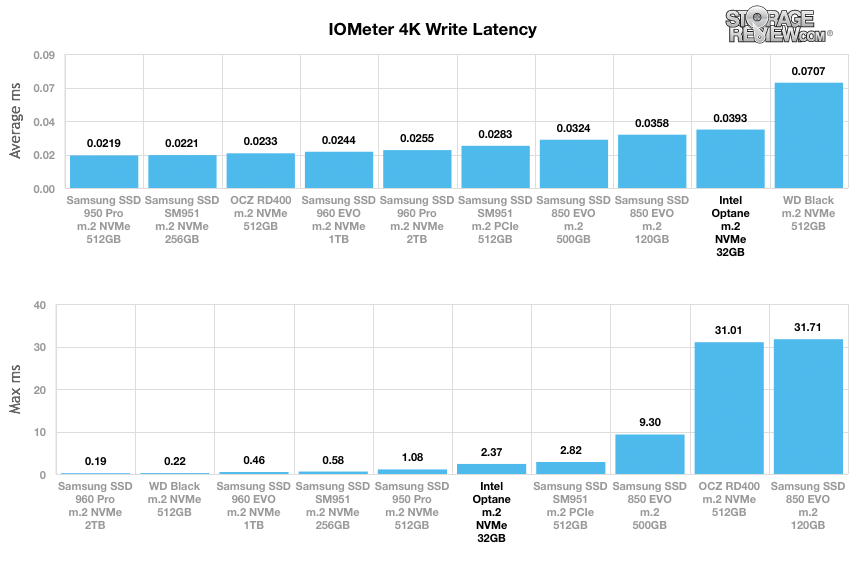 For our next 4K test, we moved to a workload with 100% write activity, which scales from 1QD to 64QD. Looking at aligned write performance, the Optane started near the bottom of the pack and stayed in second-to-last throughout beating the SATA drive and peaking at 69,570 IOPS. 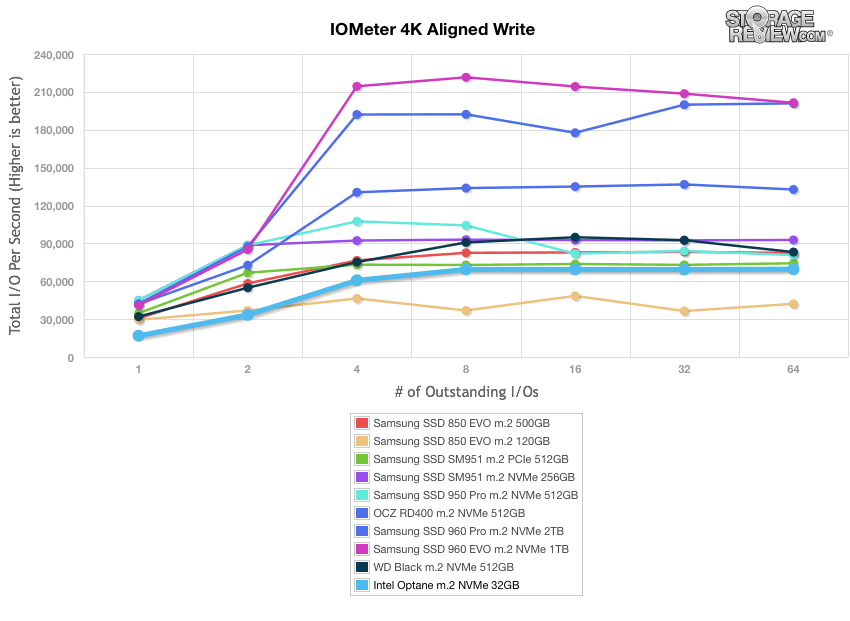 In aligned read we see almost the opposite. Optane started off much higher than all of the other drives and maintained a lead throughout most of the testing, before the Samsung 960 drives eventually overtook it. Optane peaked here at 227,862 IOPS. 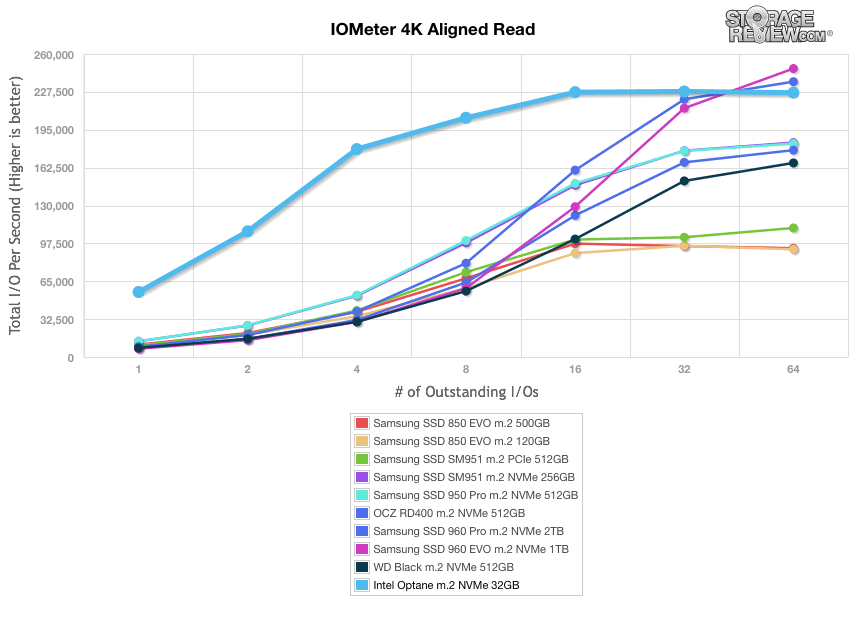 The database profile features a 67% read and 33% write workload, focusing on transfers around 8K in size. The Optane once again started out higher than the other drives before falling to the middle pretty much just stayed there until the end of the testing. The Optane peaked at 73,663 IOPS. 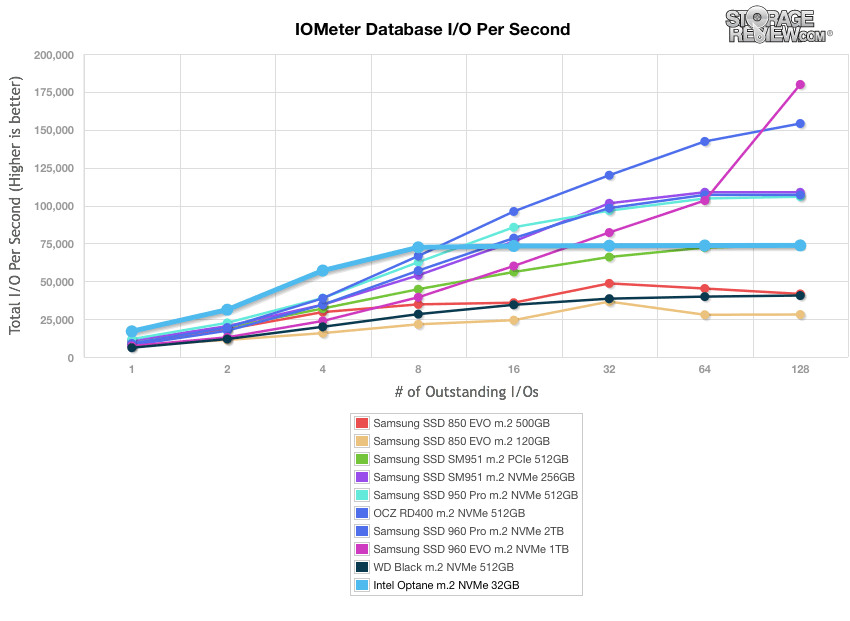 Our next benchmark is the read-only web-server profile, which uses transfer sizes ranging from 512 bytes to 512KB. Once again the Optane starts off strong, it leveled off just north of 85K IOPS and then dropped dramatically near the end of the benchmark. 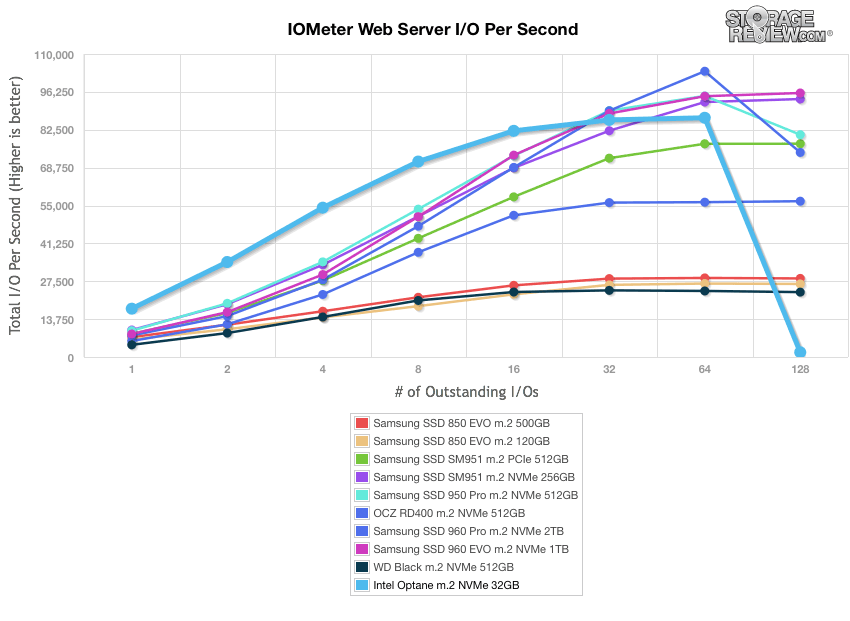 Our file-server profile has 80% read and 20% write workload and is spread out over multiple transfer sizes ranging from 512-bytes to 64KB. In this scenario, the Octane followed the same pattern of starting off strong, leveling off as other drives passed it, and then dropping near the end. 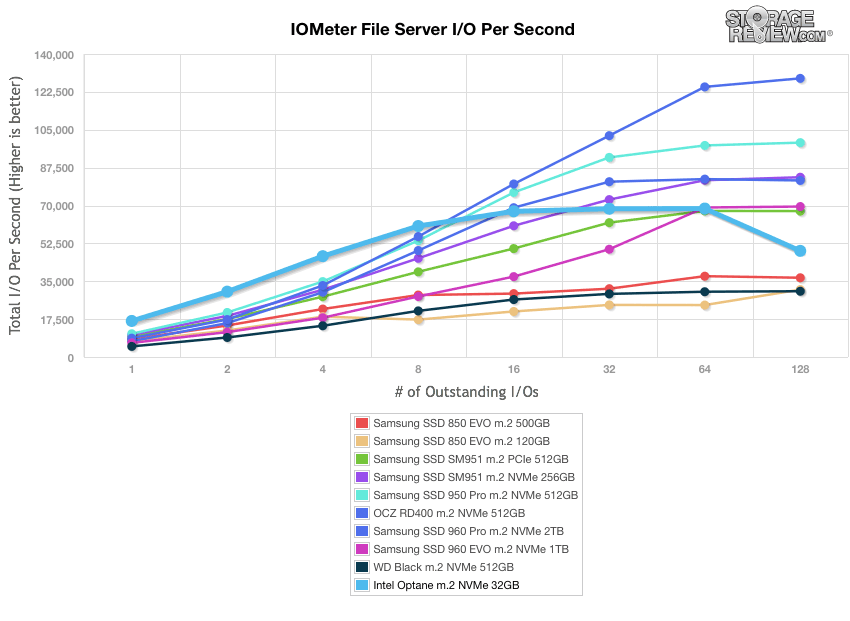 The last profile looks at workstation activity, with a 20% write and 80% read mixture using 8K transfers. Here, the Optane leveled off around 95K IOPS and held throughout the end of the benchmark, putting it roughly in the middle of the pack. 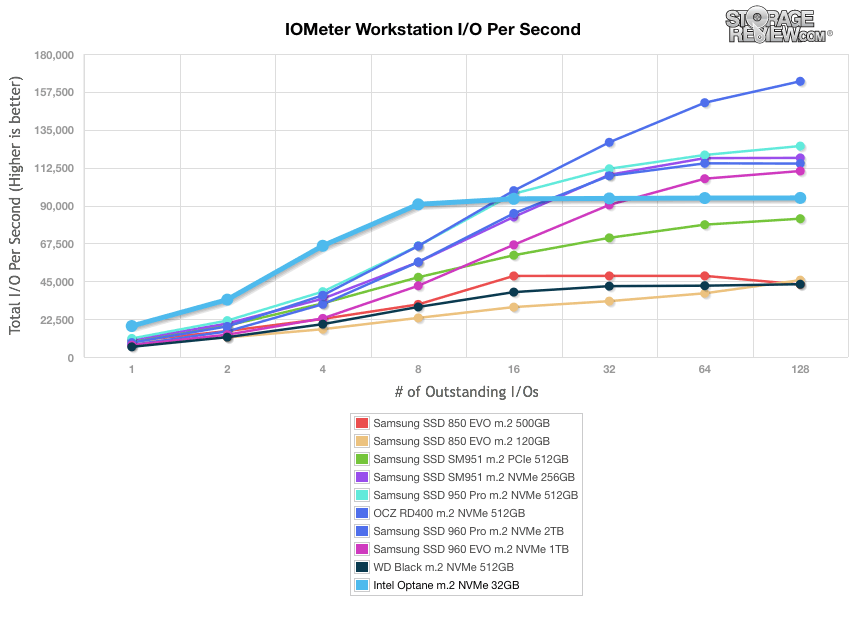 Our last benchmark is PCMark, which is a tool that calculates the performance at the system and component level. It most often represents typical home-user workloads for all types of PCs, including tablets, mobile workstations, and desktops. While there are multiple categories that PCMark tests (including typical work usage, home usage, and creative usage), we will only be looking at the Storage benchmark for this review. For this benchmark we leveraged a test system Intel provided, which included a WD Black HDD for a boot drive, with the 32GB Optane SSD for cache.

The Storage PCMark tests the performance of all drives installed in the system, leveraging traces recorded from Adobe Creative Suite, Microsoft Office and a selection of more popular video games to measure real-world performance differences between storage devices. In this scenario, we first ran a baseline test before running five tests on the Optane Memory module. The third run of the test gave us the best results overall with a score of 5,008 and a bandwidth of 437.59MB/s. While we didn’t run exact side-by-sides here, looking at our workstation reviews one can easily compare the Optane with the SM951 NVMe, the latter being the superior performer. 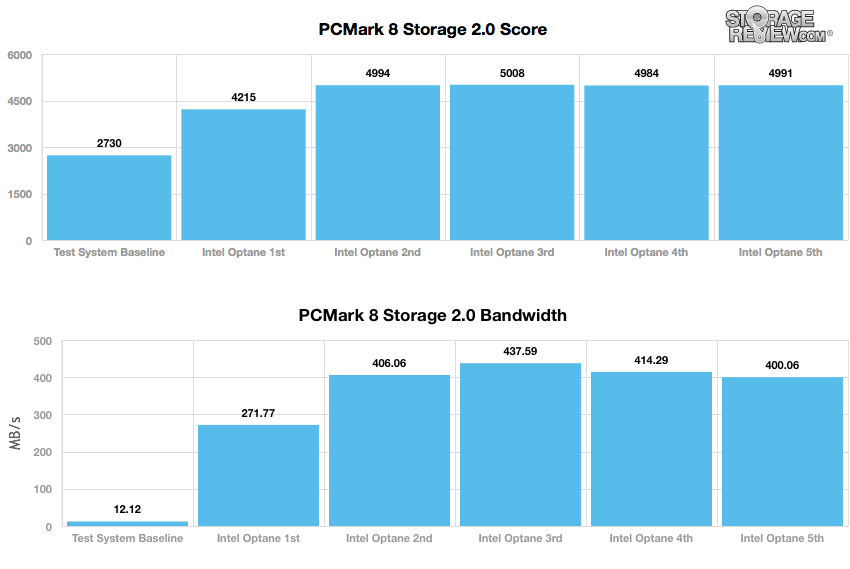 The Intel Optane Memory is an M.2 SSD paired with its own caching software that will accelerate HDDs (especially high capacity HDDs) in a desktop PC. While Intel says this is good news for certain crowds such as gamers who want to keep several games on their system with more cost-effective HDDs, that argument goes out the window with cost-effective SSDs completely saturating the market. It also introduces some issues. For one, the Optane Memory isn’t something that can just be dropped into existing computers or gaming rigs. In order to get the benefit, users more than likely would buy a new supported platform, instead of buying just an SSD and dropping it into any computer. Another issue is how much the performance will actually make a difference in most use cases. With just 16GB or 32GB of flash capacity, not everything will always be in cache the first time. That means for many users, their daily routine will take a step back in time, almost decade to be precise, to before even the Intel X25-M came to the market and hard drives ruled the land.

Turning to performance, the Optane isn’t so much of a bad performer as it was marred by its early hyperbolic market claims. Stating that it will provide 1,000 times the performance and endurance of current NAND raises expectation too much (though Intel quickly backed off this claim). Overall, the module ran in the middle to the bottom of the pack in the drives it was compared to in stand-alone synthetic benchmarks. In our 2MB tests, the Optane had sequential scores of 1,225.52MB/s read and 270.77MB/s write and random scores of 1,252.42MB/s read and 273.90MB/s write. In our low-queue depth 4K benchmarks the Optane gave its best performance overall with 221.68MB/s read and 56,751 IOPS read. The Optane had a fairly strong performance in our aligned read coming in third.

In our mixed server workloads the Optane landed in the middle of the pack twice (database and workstation) and ran in the middle before dramatically dropping off near the end twice (web-server and file-server). We also ran the Optane Memory module though PCMark 8, once for a baseline and then five times to see how the drive performed. It peaked at a score of 5,008 and a bandwidth of 437.59MB/s. Though these are good numbers, they are lower than the SM951 M.2.

With benchmarks showing impressive low-queue depth performance, overall the product came up underwhelming in our opinion. It doesn’t really hit it out of the park in any category. Pricing isn’t even that attractive, when you have to consider the cost of the SSD plus supporting motherboard (or CPU) versus just a normal SATA or NVMe M.2 SSD. Capacity isn’t great either, making for plenty of “first time” interactions painfully slow. The first PCmark 8 Storage score to any interested buyer should be the most concerning, any uncached data will be met with painfully slow HDD response times. Yes, for this ultra-fast emerging technology, users will still have to put up with that dreaded wait time, wishing they have just bought a larger “legacy” SSD. In the end, Intel is looking for somewhere to ship Optane while they work on a true SSD form factor for enthusiasts and the enterprise SSDs increase in capacity. Optane Memory isn’t going to take off however, nor should it. Caching drives were all the rage for a brief moment in flash history and once again the model of accelerating hard drives falls flat. HDDs will remain a great place to large storage volumes and SSDs remain the best place to boot from and to install active applications. A bridge between the two is not really needed, nor is it all that useful.

The Intel Optane Memory module is designed to accelerate HDDs but stumbles with underwhelming performance and is tripped up by the need for new motherboards and CPUs to support it. It may be the first step in the direction of new NAND technology, but it either feels like a baby step or a misstep altogether.