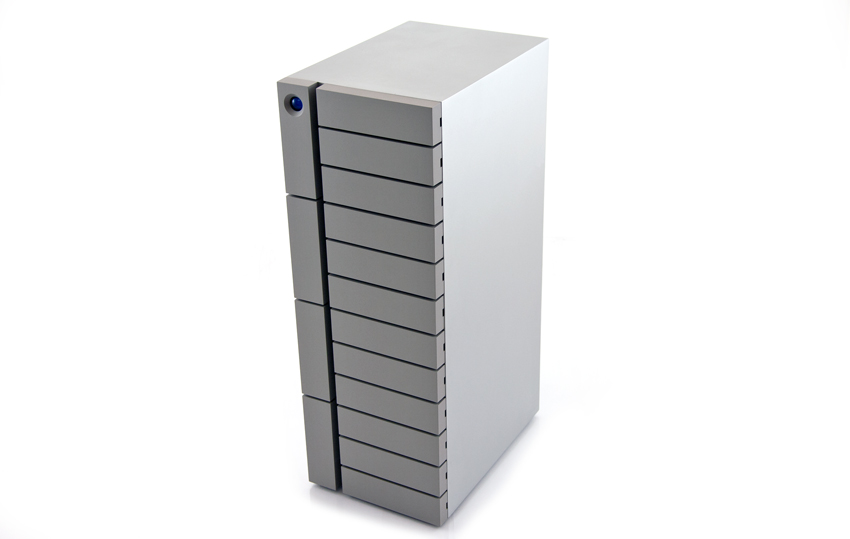 With a product line from companies such as Red Digital Cinema, creative professionals can now take video in 4/5/and even 6K. While this can lead to beautiful video and imagery, such high-res content will quickly take up massive amounts of space. Creative professionals using such storage hungry products need both capacity and speed to store and edit their work. For optimum performance in 24×7 operation, LaCie leverages 8TB Seagate NAS drives to populate the 12big. They also made it easy to get the device up and running again after hard drive failure or to expand storage capacity, as each hard drive is hot-swappable and field replaceable.

Its support for Thunderbolt 3, however, is perhaps the biggest draw. Leveraging the new Thunderbolt technology, the 12big doubles the video bandwidth of its predecessor and allows users to daisy chain dual 4K displays or a single 5K display. LaCie quotes a maximum of 2,600MB/s read and 1,700MB/s write when configured in RAID0.  Those looking for legacy support are in luck as well: it’s possible to support older versions of Thunderbolt using a Thunderbolt 3 (USB-C) to Thunderbolt 2 adapter. The 12big is also USB 3.0 compatible, though businesses who buy the purpose-built device likely won’t use it.

The LaCie big12 is a unique looking device; though it is still in line with the design ID of the company’s other storage solutions. At 17.6 inches tall, it has a very minimalistic design with its silver chassis that is divided into four sections, which are in turn divided into four more (each of which is a drive bay).

The only LED light on the front panel is familiar LaCie blue circle, which is located at the left. Acting as the power button, this LED doubles as a status indicator, letting users know what’s going on with their drives by color and blinking.  With a short push of this button, the drives will spin down into idle mode, while a long push cuts power to the system without spinning the hard drives down during emergency situations. 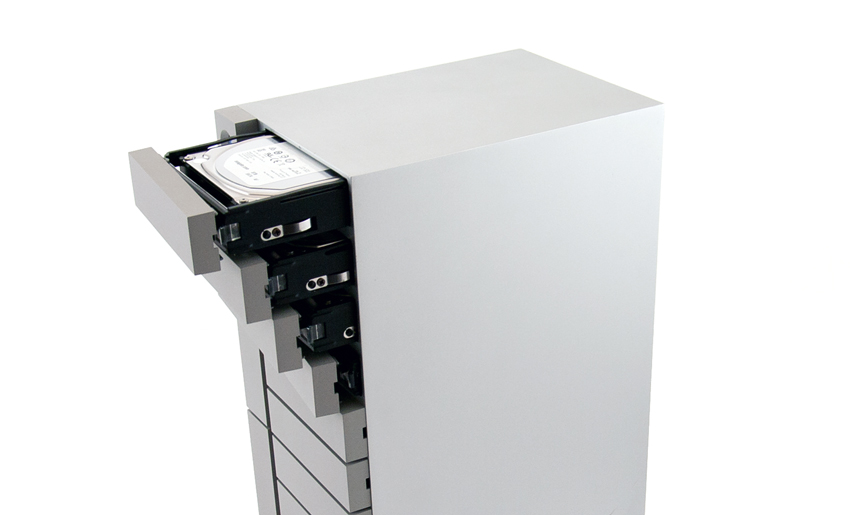 All 12 trays are swappable, allowing installed drives to be easily removed or replaced during hardware failures.  To access the drives from the drive bays, simply place your finger on the small hole on the right side of its disk tray and pull away from the enclosure until it unlocks the hard drive from the SATA connector. The bay will then open up.  To remove the drive from the bay, remove the four Phillips head screws and slide the disk out of the tray.

The LED drive Indicators are located on the right side of the device and display activity and health. 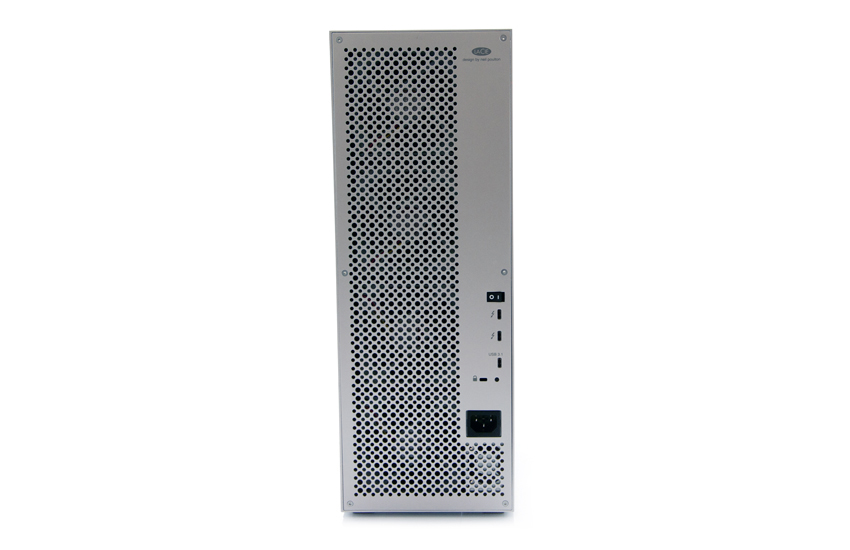 The majority of the real estate on the back panel is taken up by ventilation for the system fan. To the right is the power switch, two Thunderbolt 3 ports (both ports can be used as the host as part of a daisy chain or for power delivery to compatible devices), and a USB 3.1 port.   It should be noted that the Thunderbolt 3 and USB 3.1 ports cannot be used simultaneously. Also located on the back panel is the Firmware update button, the power input, and a Kensington lock port.

LaCie RAID Manager allows you easily manage storage and configure the 12big including setting up the type of RAID, receiving email alerts, and measuring the health of the hard drives. The latest version has brought a redesigned and more modern-looking interface featuring a much more user-friendly navigation system. 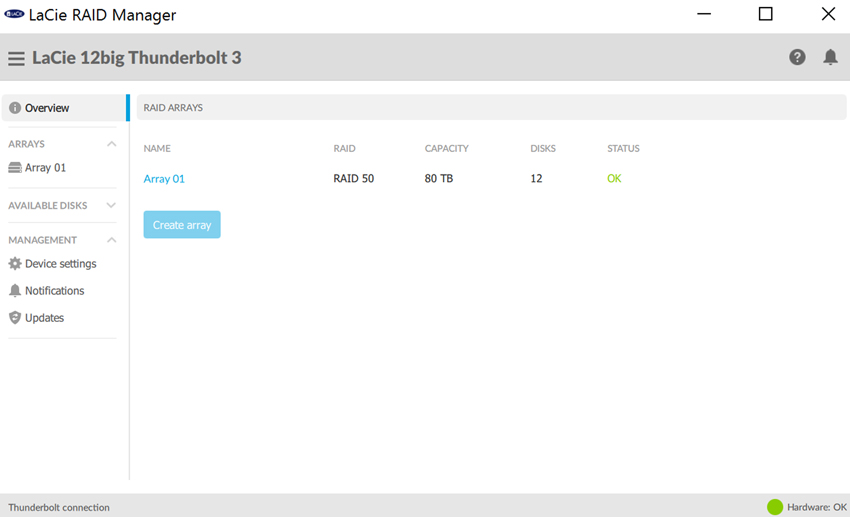 RAID Manager is straightforward to set up; simply download and install the software from the LaCie website and then connect device to your computer. It also features Wizards that can easily create and manage volumes optimized for your needs.

The RAID Manager header is always visible and available to users no matter where you are in the software. At the top left is the menu for device actions and switching devices with actions such as muting an audible alarm, quitting and shutting down. Top right question mark gives access the user manual, while the bell icon displays the latest notifications when clicked.

The Overview section shows information about any compatible LaCie device that connected to the host computer. On the left pane, clicking an array will direct the user the page with its status, details and management options. Below that are device settings, notifications and possible updates. This section also allows you to assign a disk as a spare.

To test the performance of the LaCie 12Big, we used the HP Z1 All-in-One workstation, which leverages dual Thunderbolt 3 ports (USB 3.1 type C) and six additional USB 3.0 ports. We populated the LaCie device with 8TB Seagate Enterprise NAS HHDs in RAID5. As the 12big stands more or less in a crowd of its own, we will not be comparing it to other DAS.

Outfitted with 12 drive bays, the LaCie 12Big offers upwards of 120TB in storage (RAID5), making it the company’s largest RAID storage solution to date. The 12Big leverages 8TB Seagate NAS to attain this massive storage pool, which are specced with very reliable 8,760 hours of operation per year. Moreover, to decrease periods of downtime in the event of hard drive failure and minimal effort when expanding storage capacity, the LaCie features hot-swappable bays with field replaceable support. The large storage device is also very easy to manage via the LaCie RAID Manager, which gives users an effective way to configure the type of RAID, receive email alerts, and measure the health of the populated hard drives. The latest version has also been overhauled for a more modern and user-friendly interface.

The LaCie 12Big is a solid DAS offering for media professional with upwards of 120TB in storage and plenty of performance power.