The Intel SSD 320 is the company’s follow-up to its highly successful X-25M series of consumer solid state drives (SSDs). This mainstream SSD sits right behind the 510 in Intel’s product lineup; we reviewed the 510 here back in February. Our Intel SSD 320 review today is about the results from setting up two of them in a performance-maximizing RAID 0 setup, where data is striped across both drives.

The Intel SSD 320 is the company’s follow-up to its highly successful X-25M series of consumer solid state drives (SSDs). This mainstream SSD sits right behind the 510 in Intel’s product lineup; we reviewed the 510 here back in February. Our Intel SSD 320 review today is about the results from setting up two of them in a performance-maximizing RAID 0 setup, where data is striped across both drives.

You can find our full review of the Intel SSD 320 here. While not the fastest drive money can buy, we found the 320 to be a worthy replacement for the X-25M. The 320 showed strong performance gains over the X-25M, including 19-36% better write speeds. That said, Intel’s goal was not to produce the highest-performing SSD on the market; rather, the focus was creating something very reliable especially for enterprise customers. Another one of the SSD 320’s main strengths is the large capacities offered. This 2.5-inch SSD comes in 40GB, 80GB, 120GB, 160GB, 300GB, and 600GB models and use Intel’s 25nm NAND flash memory.
That said, what happens when two of them are paired in a RAID 0 high performance setup? The test results below tell all. 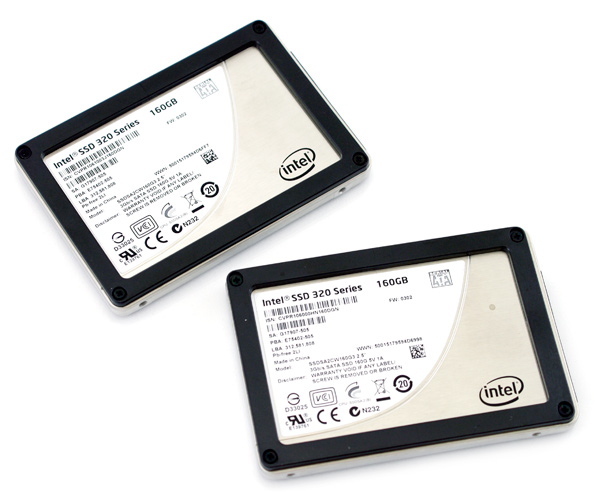 Our reviews start out looking at synthetic benchmarks. These are useful because they provide absolute performance indicators and bring out the strengths and weaknesses of the drives. However, these numbers don’t always translate into real-world performance; we have a section for that later in the review. 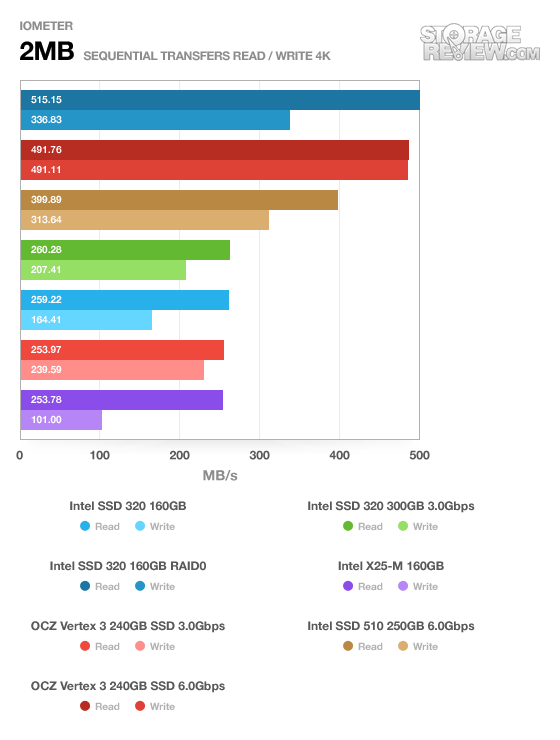 This sequential transfer benchmark shows the absolute maximum data transfer rate for the drives. We can see the SSD 320 RAID setup performing between 1.5-2x as fast as the single drive, which is expected with a RAID 0 setup. While it beats out its SSD 510 RAID 0 brother, even two SSD 320s can’t beat the OCZ Vertex 3. 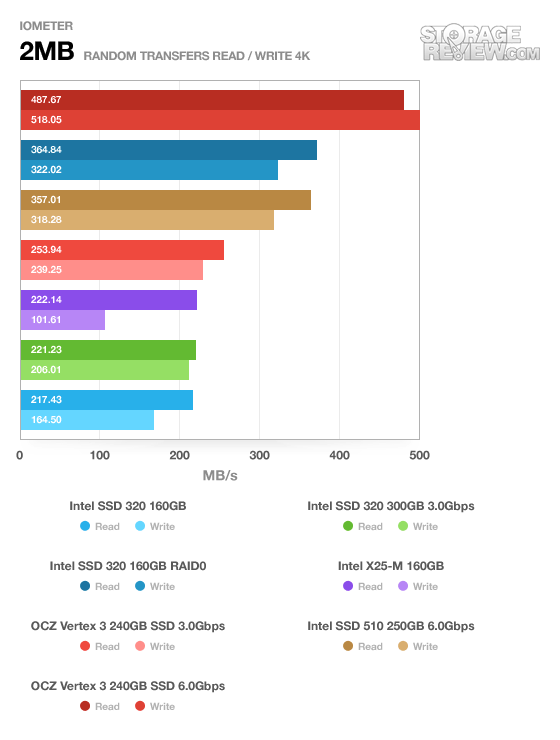 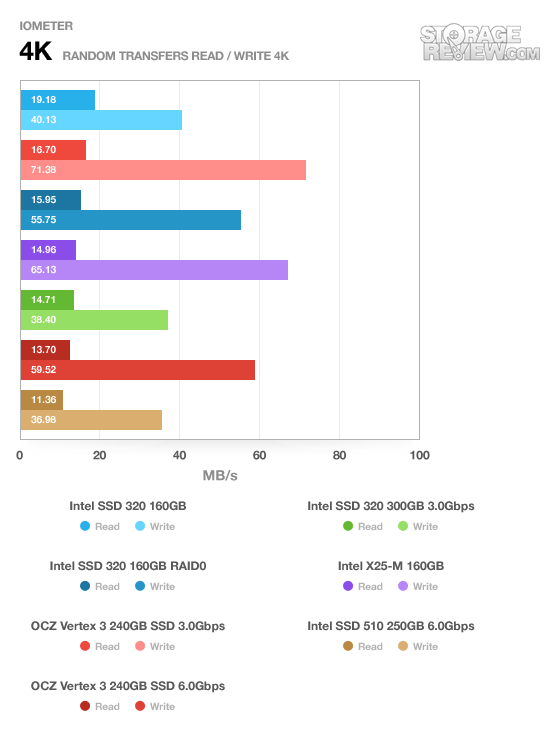 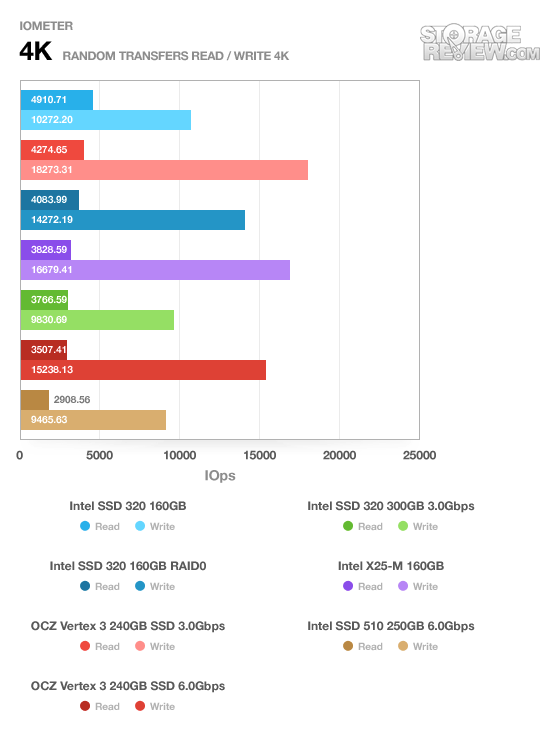 The random transfer benchmark is a better indicator of real-world performance since smaller file sizes are being accessed. The SSD 320 RAID 0 setup handily outperforms the SSD 510 RAID 0 setup. 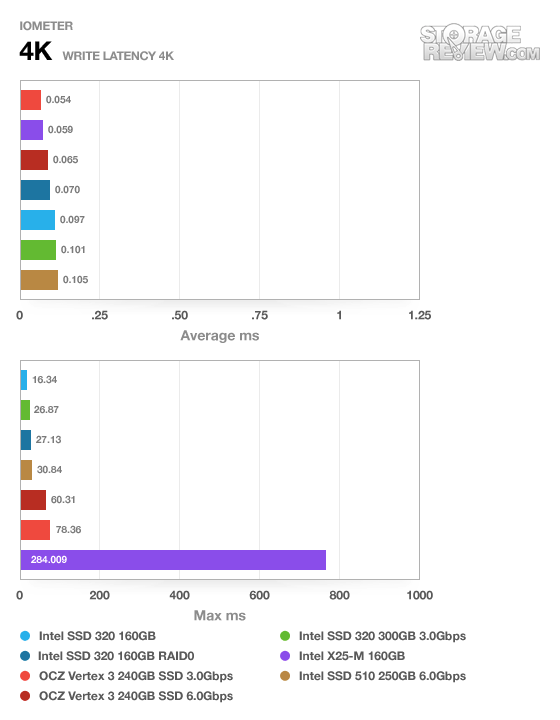 The SSD 320 RAID 0 setup does well here, producing very low min and max latencies. This is an important benchmark as the latency of a drive is directly related to how responsive it feels in real-world usage. 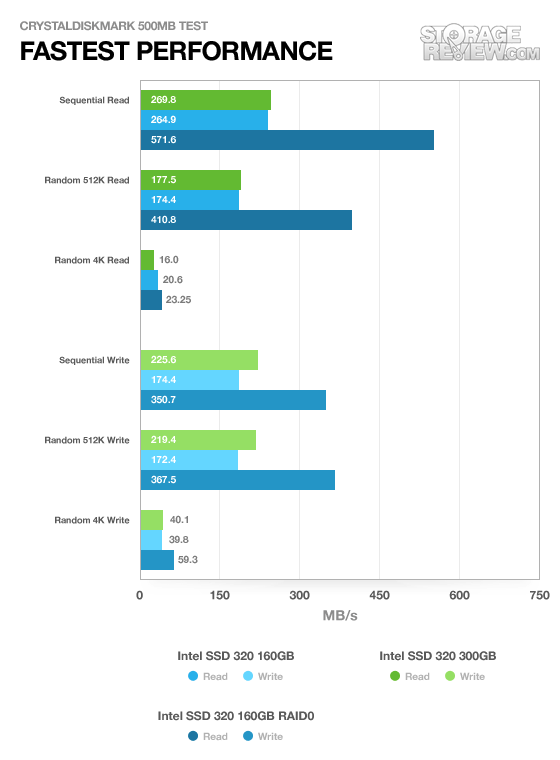 CrystalDiskMark shows the maximum data transfer rates. Here we can see the SSD 320 RAID 0 setup beating out the single drive by at least a factor of two, which means it is performing predictably well; a RAID 0 setup should show a 2x performance increase all around compared to a single drive, and this is certainly true here.
This next set of benchmarks subjects the drives to server-style workloads. We expect to see a performance increase from left to right as the queue depth increases. 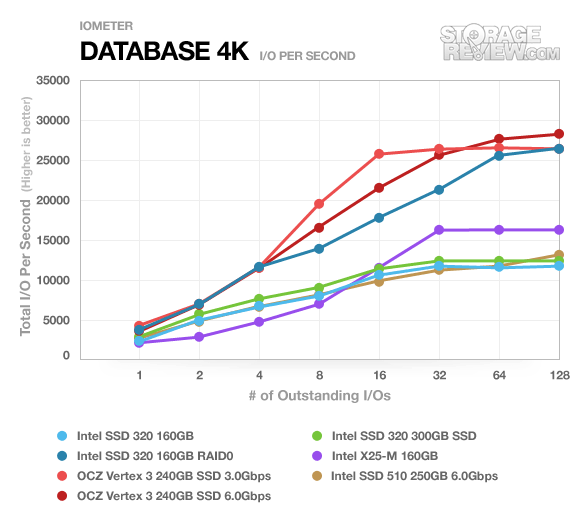 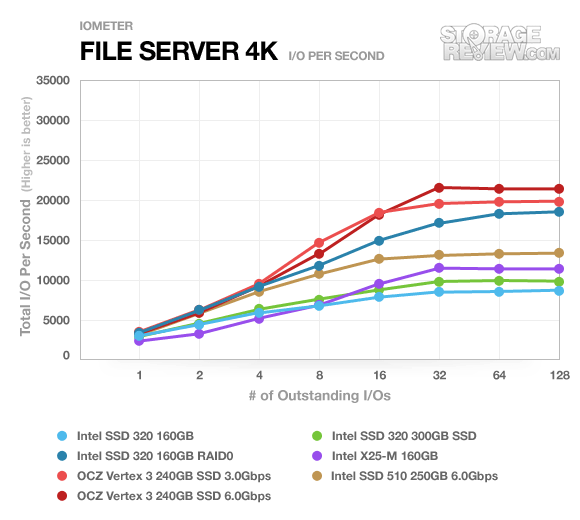 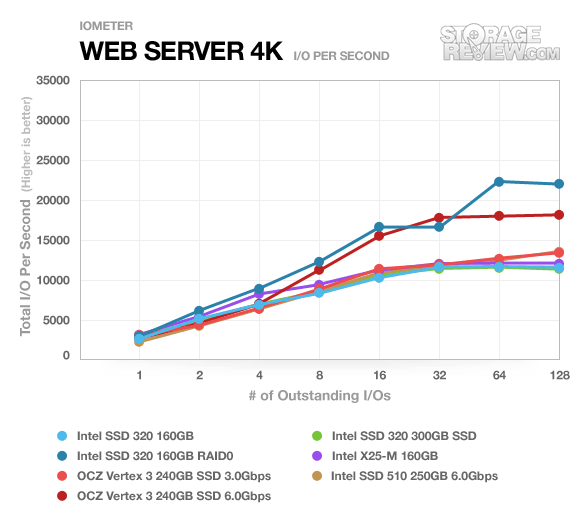 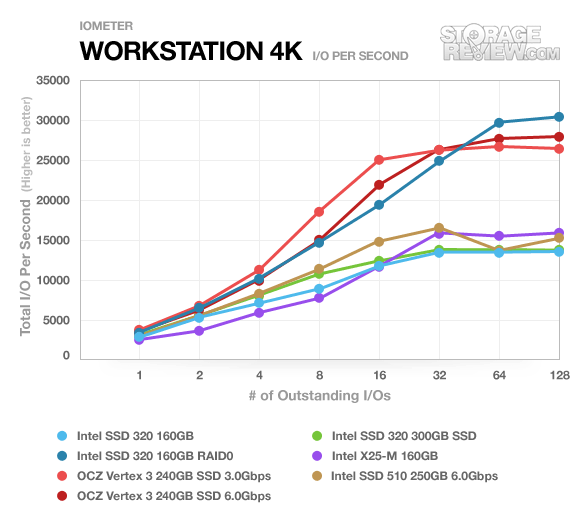 In these benchmarks the SSD 320 RAID 0 setup closes the gap significantly between it and the OCZ Vertex 3. Also notice how well the RAID 0 setup stacks over the single SSD 320; the performance is 2x in some cases, which is exactly what we expect to see from a RAID 0 setup.
Real-World Benchmarks
Our real-world benchmarks are just that; these benchmarks actually simulate using real-world applications to show exactly how this drive performs next to others.

If you are new to StorageReview, one thing we try to focus on is how any given drive might perform under real-world conditions. For the average user, trying to translate random 4K write speeds into an everyday situation is pretty difficult. It helps when comparing drives in every setting possible, but it doesn’t exactly work out into faster everyday usage or better game loading times. For this reason we turned to our StorageMark 2010 traces, which include HTPC, Productivity, and Gaming benchmarks to help readers find out how a drive might perform under their conditions. 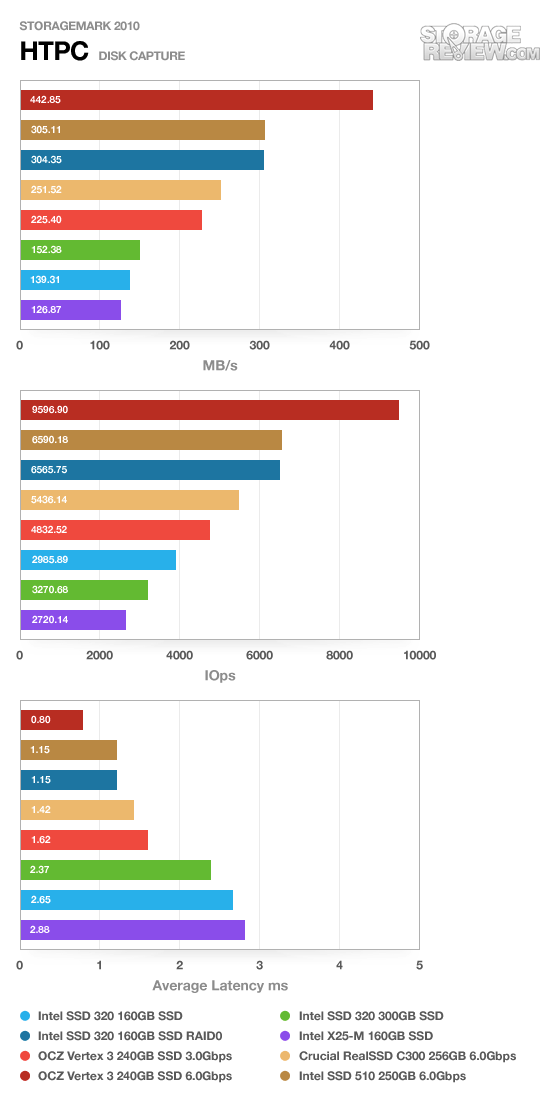 So far, so good. It’s pretty clear at this point that the SSD 320 RAID 0 setup can’t touch the enthusiast class SATA 6Gb/s drives, but it is competitive and puts up predictably good performance.
Our second real-life test covers disk activity in a productivity scenario. For all intents and purposes this test shows drive performance under normal daily activity for most users. This test includes: a three hour period operating in an office productivity environment with 32-bit Vista running Outlook 2007 connected to an Exchange server, web browsing using Chrome and IE8, editing files within Office 2007, viewing PDFs in Adobe Reader, and an hour of local music playback with two hours of additional online music via Pandora. In this trace we recorded 4,830MB being written to the drive and 2,758MB being read. 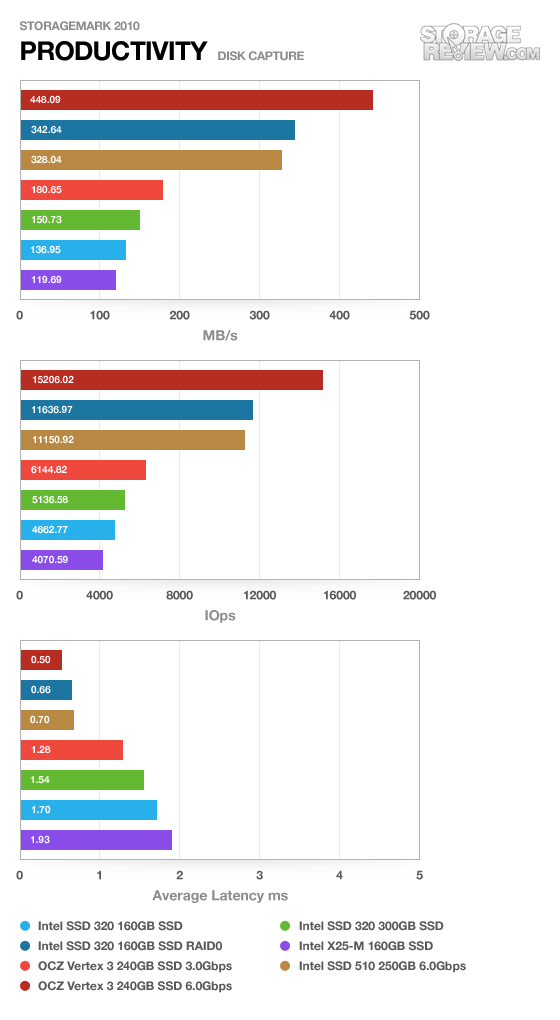 Again the SSD 320 RAID 0 setup remains competitive; it is over twice as fast as the single SSD 320 and has less than half the latency.
Our third real-life test covers disk activity in a gaming environment. Unlike the HTPC or Productivity trace, this one relies heavily on the read performance of a drive. To give a simple breakdown of read/write percentages, the HTPC test is 64% write, 36% read, the Productivity test is 59% write and 41% read, while the gaming trace is 6% write and 94% read. The test consists of a Windows 7 Ultimate 64-bit system pre-configured with Steam, with Grand Theft Auto 4, Left 4 Dead 2, and Mass Effect 2 already downloaded and installed. The trace captures the heavy read activity of each game loading from the start, as well as textures as the game progresses. In this trace we recorded 426MB being written to the drive and 7,235MB being read. 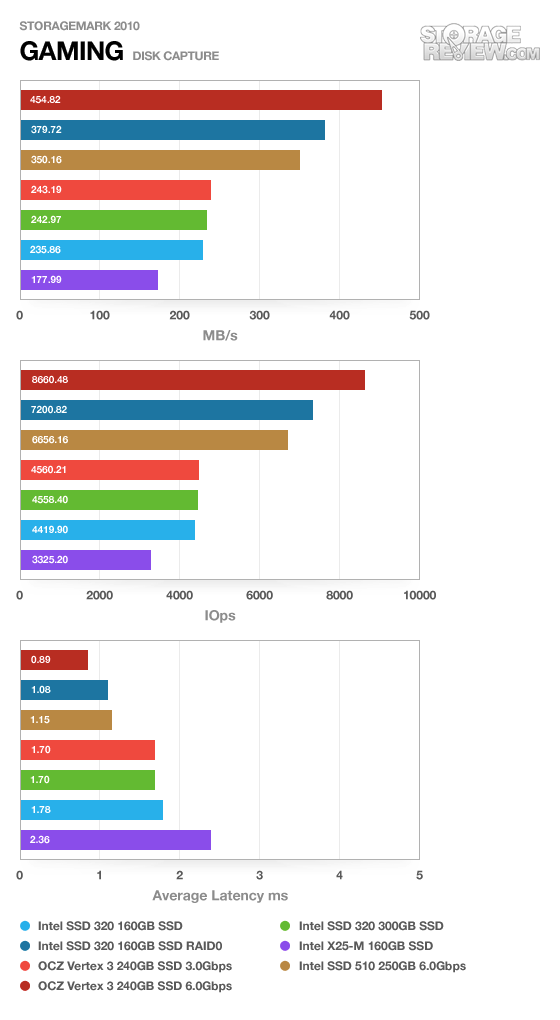 The Intel SSD 320 comes with a three-year limited warranty, which is the industry standard. Additionally, Intel includes its useful Intel SSD Toolbox software, which allows users to optimize their systems for an SSD, maintain the drive, and the ability to wipe or “sanitize” the drive.

The Intel SSD 320 performed just about where we expected it to in terms of its RAID0 performance. In most benchmarks it yielded between 1.5 to 2x the performance of a single SSD, giving us the reliability of the trusted completely-Intel powered 3Gb/s platform with the speed almost reaching that of the faster SATA 6Gb/s drives. For shoppers it really comes down to balancing performance and reliability. Let’s take a look at the value proposition: the Intel SSD 510 250GB goes for about $570 street, putting it at $2.28 per GB of space; two Intel SSD 320 160GB at $300 street each translates to $1.88 per GB. While the SSD 320 is 90% as expensive from a capacity standpoint, it’s also putting out less than 90% of the performance (our tests showed an average in the low 80% range).
That said, the SSD 320 RAID 0 setup is still worth considering for those more interested in capacity but still want good performance. A 160GB SSD 320 offers significantly more capacity for the money at $300 than the company’s higher-end 120GB SSD 510, which goes for $280 street, and the savings translate into the RAID 0 setups.
Pros:
Cons:

The Intel SSD 320 in RAID 0 is a reliable setup but won’t beat out the fastest single SSDs on the market.
Discuss This Story
0 comment
0
FacebookTwitterPinterestEmail