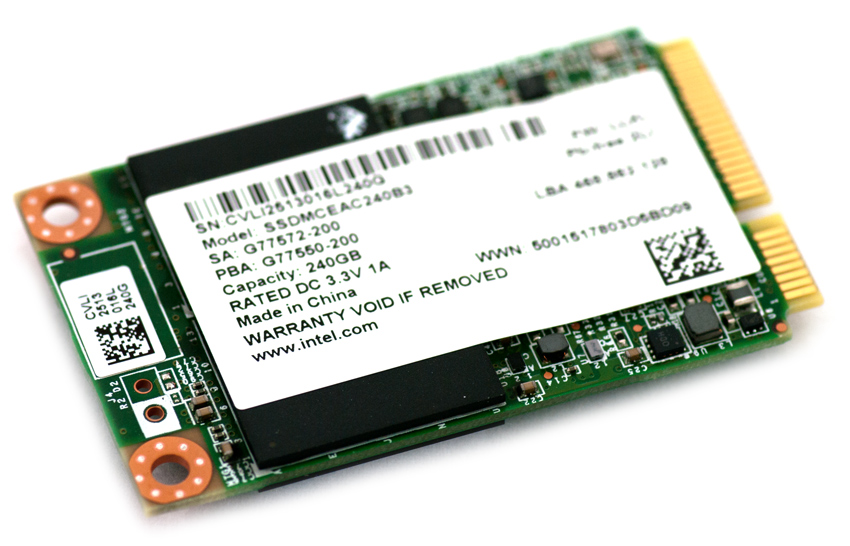 The SSD 525 mSATA follows on to Intel’s prior generation SSD 310 series, which previously only came in 40GB and 80GB capacities and entered the mSATA SSD space at a very early phase. Now almost every significant SSD vendor offers an mSATA form factor for the ultraportable and embedded computing spaces in a variety of capacities making the market much more competitive. As noted Intel continues to leverage the SandForce controller in their consumer (client) line of products which unifies their support structure and simplifies firmware builds and the like. Intel is also leveraging their own NAND which comes from the IMFT partnership with Micron, further improving their ability to offer a quality product with class-leading reliability and compatibility, both critical factors to OEMs considering product for integration in this space.

The Intel SSD 525 mSATA has a standard mSATA form-factor, with a SATA 6Gb/s interface. The components are exposed by design, and once we remove the white Intel label, we can also see what drives the NAND Flash Memory. 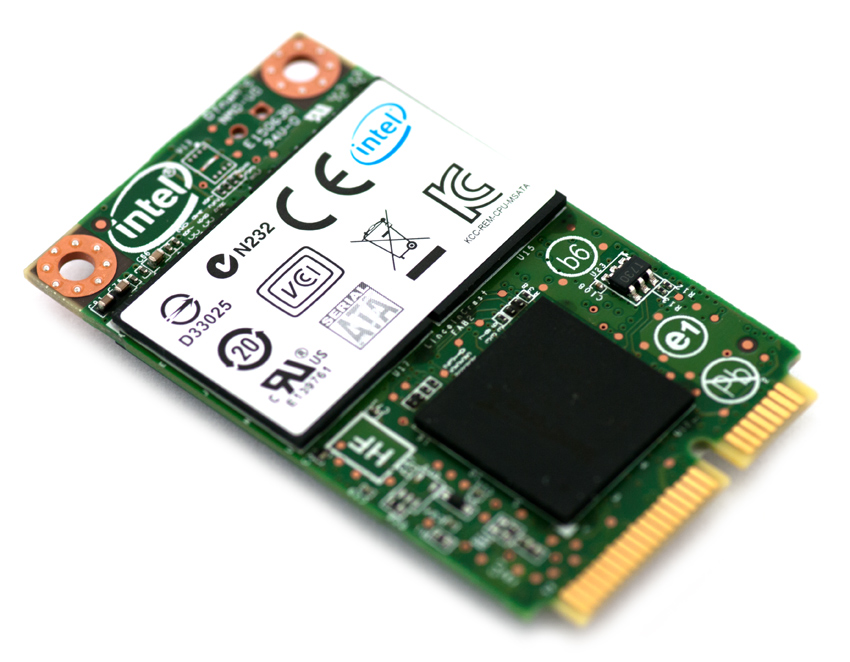 The label reveals two 64GB Intel 25nm MLC NAND chips, along with an LSI SandForce SF-2281 controller at the heart of the SSD 525. 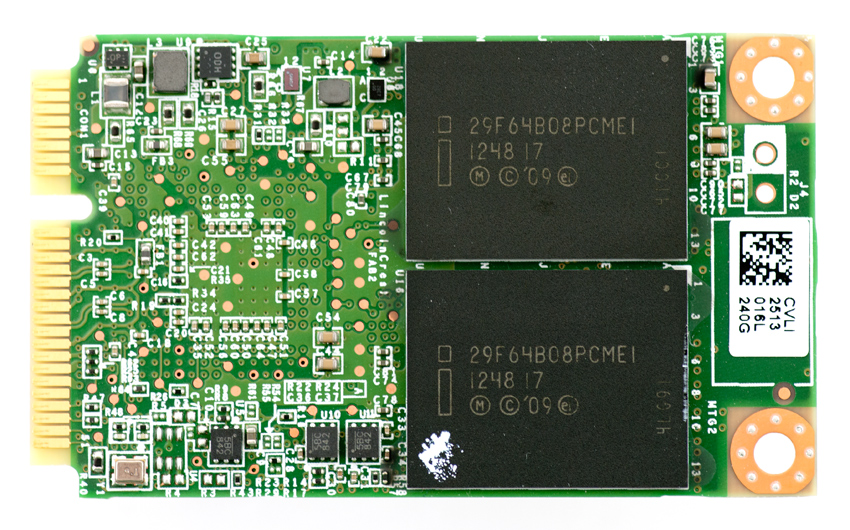 Overall the design is about as simple as it gets for an SSD, but an engineering accomplishment nonetheless as space and power constraints make miniaturizing storage without impacting performance and retail price a significant challenge.

All consumer SSD benchmarks are conducted with the StorageReview Consumer Testing Platform, with an mSATA interposer card. The comparables used in this review include:

Our first test measures peak straight-line performance through a large-block sequential transfer. For reference, Intel SSD 525 lists a peak read speed of 550MB/s and a write speed of 520MB/s.

In the sequential transfer test, we measured an average speed of 503MB/s read and 466MB/s write using Repeating data. The speeds slowed down to 493MB/s read and 299MB/s write when using incompressible data.

Moving on to even smaller transfer request sizes, our next section looks at random 4K read and write performance at a queue depth of one, and then later it moves to expanded queue depth tests.

The SSD 525 offered the strongest low queue-depth performance out of the group in read performance, measuring 8143 IOPS read with repeating data. We saw a drop in performance with incompressible data, measured at 7605 IPS read. The SSD 525 ranks first and third with regards to Read performance. It placed behind the Micron when we looked at its write performance at 17,989 IOPS (repeating) and 17743 IOPS (random).

In our next test, we shift to a smaller 4k random workload, with 100% read activity that scales from 1QD to 64QD. In this setting, the Intel SSD 525 mSATA started off in the middle of the pack and remained there with just under 68,000 IOPS. In our next test looking at 100% 4K random write performance, the Intel SSD 525 mSATA started at the head of the pack at queue depth 4. Repeating performance peaked at just over 84,000 IOPS and Random peaking at just under 67,000 IOPS. In our 4K write latency test, which measures access times at a queue depth of 1, the SSD 525 performed below the Micron and OCZ mSATA drives with 0.0551ms. Peak latency was good, measuring 11.87ms, just behind both the Micron and Plextor. 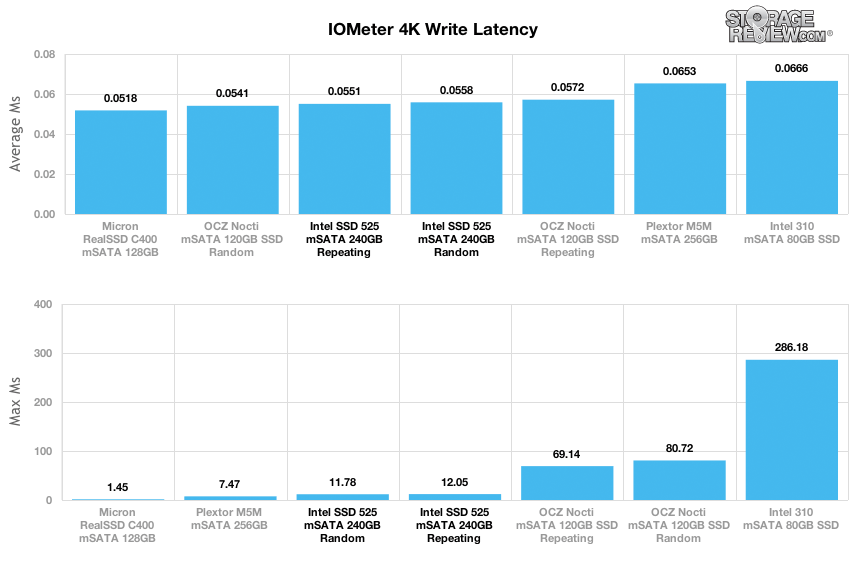 Our last group of consumer IOMeter synthetic benchmarks looks at mixed-load server profiles including Database, Workstation, File Server, and Webserver. In all areas, the SSD 525 mSATA outpaced the pack of the other mSATA SSDs above queue depth 16 with Random data. Looking at Repeating data, the SSD 525 mSATA fell in the middle of the pack at all queue depths. 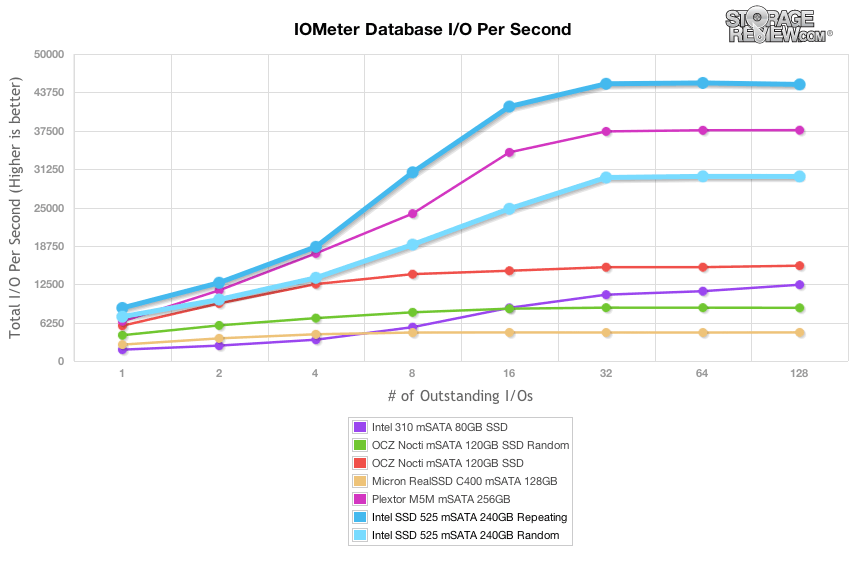 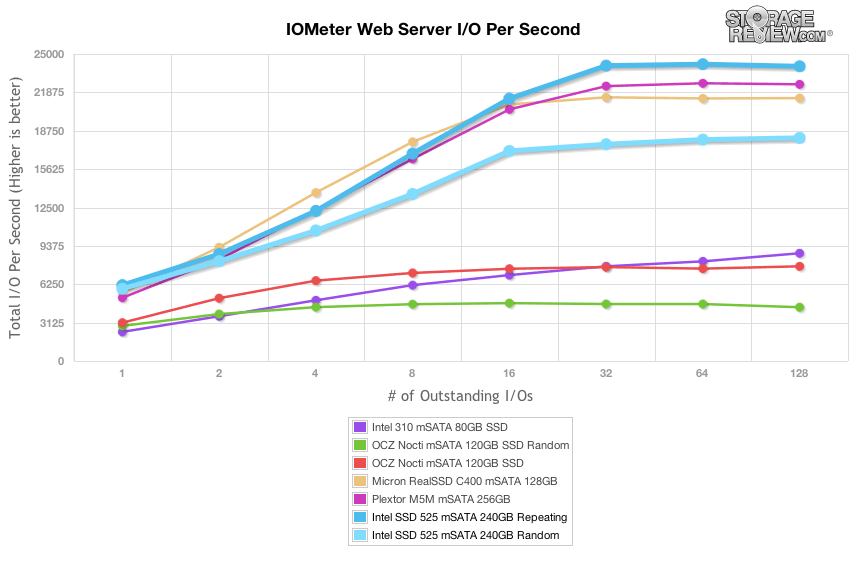 In our Productivity trace, we measured an average speed of 314MB/s, 10717 IOPS, and 0.72ms average latency, which led the group of mSATA drives. In our read-intensive Gaming trace, the SSD 525 mSATA was able again to lead the pack of comparable mSATAs with performance numbers of 457.4MB/s, 8671 IOPS, and 0.85ms average latency. Though essentially equal in performance, the SSD 525 did place just above the Plextor M5M.

When looking at any modern SSD, power consumption is a huge deciding factor for many mobile shoppers, since the drive itself can make up a large portion of the total power used in a given notebook. In our power consumption tests, we look at how much a given drive draws during read and write activities, as well as startup requirements and idle.

In our lab measuring power over native 3.3v to the Intel SSD 525 mSATA, we saw an idle usage of 0.55 watts, compared to 0.25w that Intel listed on the spec sheet. During constant write activity with compressible data, we measured 2.13 watts, which increased to 4.12 watts with incompressible data. Sequential read activity needed 2.63 watts, while random 4K read needed just 1.99 wats. Startup power measured 2.53 watts.

Though not entirely dominant, the SSD 525 had the fastest performance numbers to date out of an mSATA SSD in our real-world traces and pretty good performance in the synthetic workloads overall. It is worth noting however that the SSD 525 tested literally just a point or so higher than the Plextor M5M mSATA in our traces making them quite comparable to the point it’s unlikely the end user would notice a difference. Overall, for users looking for another option in the mSATA SSD space, the Intel SSD 525 mSATA provides very fast speeds.

Like the rest of the SSD world though, performance is just one factor to consider when it comes to buying. Intel has done a very good job building their storage brand in terms of compatibility and reliability, two factors that are perhaps more important to OEMs and integrators who are going to be buying the bulk of these drives. Thanks to Intel’s large engineering teams, they have an advantage few others can replicate when it comes to these factors, along with intimate knowledge of the NAND used since it’s their own. They also have a dedicated in-house firmware team. In aggregate the SSD 525 mSATA performs well, but when factoring in the engineering backing, the 525 sets itself apart as currently a best-in-class offering in this form factor.

The Intel SSD 525 mSATA SSD delivered by providing some of the fastest speeds to date in the mSATA category coupled with renowned Intel reliability and compatibility. The 525 mSATA is without a doubt the best-in-class solution for mSATA storage.