Intel launched the SSD 530 series as a progressive update on their SSD 520 line, moving away from the 25nm NAND flash and incorporating new SandForce silicon with 20nm flash for more efficient power consumption. The 530 series also consolidates Intel's various form factors which previously carried different model numbers.14 new products don the SSD 530 brand in a variety of different form factors; standard 2.5", mSATA and M.2. As was the case with their previous series, Intel has optimized the SandForce firmware to deliver a combination of performance and reliability.

Intel launched the SSD 530 series as a progressive update on their SSD 520 line, moving away from the 25nm NAND flash and incorporating new SandForce silicon with 20nm flash for more efficient power consumption. The 530 series also consolidates Intel's various form factors which previously carried different model numbers.14 new products don the SSD 530 brand in a variety of different form factors; standard 2.5", mSATA and M.2. As was the case with their previous series, Intel has optimized the SandForce firmware to deliver a combination of performance and reliability. 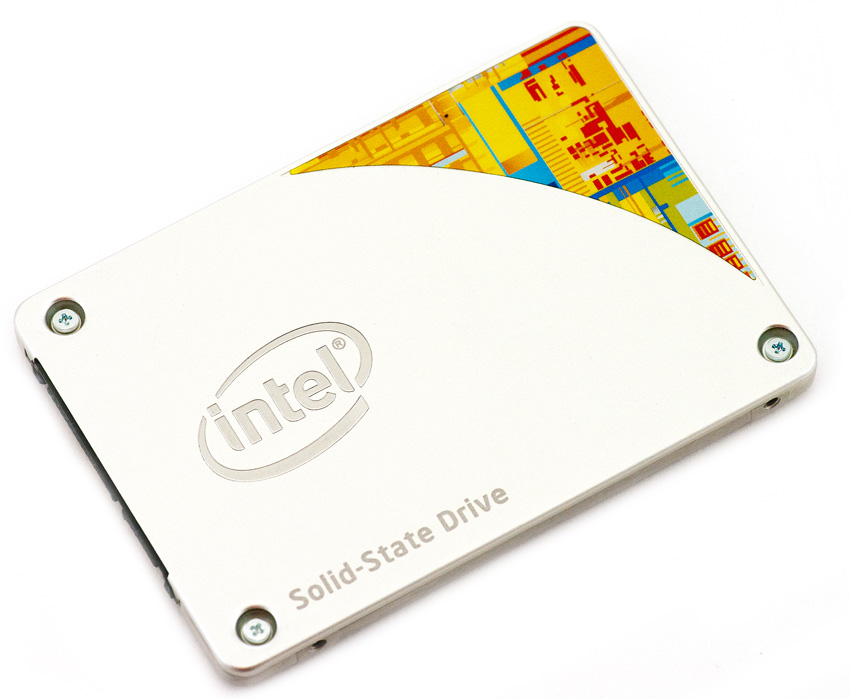 Every Intel 530 SSD is quoted to have a maximum read speed of 540 MB/s and a write speed of 490 MB/s. With those performance numbers– a tad lower than other SandForce-based SSDs–it’s clear that Intel’s new 530 line is catered towards a more mainstream consumer base rather than for the maximum possible transfer rates. Additionally, the maximum 4k random IOPS is 41,000 and 80,000 for reading and writing respectively. The Intel SSD 530 Series also offers key features such as Advanced Encryption Standard (AES) 256-bit Encryption to protect user data, End-to-End Data Protection, and Data Compression to help improve performance and endurance by automatically compressing information sent to the SSD.

One of the small things about the new 530 series is that it appears Intel is now taking the design of its consumer-branded SSDs up a notch. As such, the Intel 530 240GB has a very nice, modern look to it in terms of design with its silver colored all metal enclosure, with a dash of color with the faux circuit board sticker. 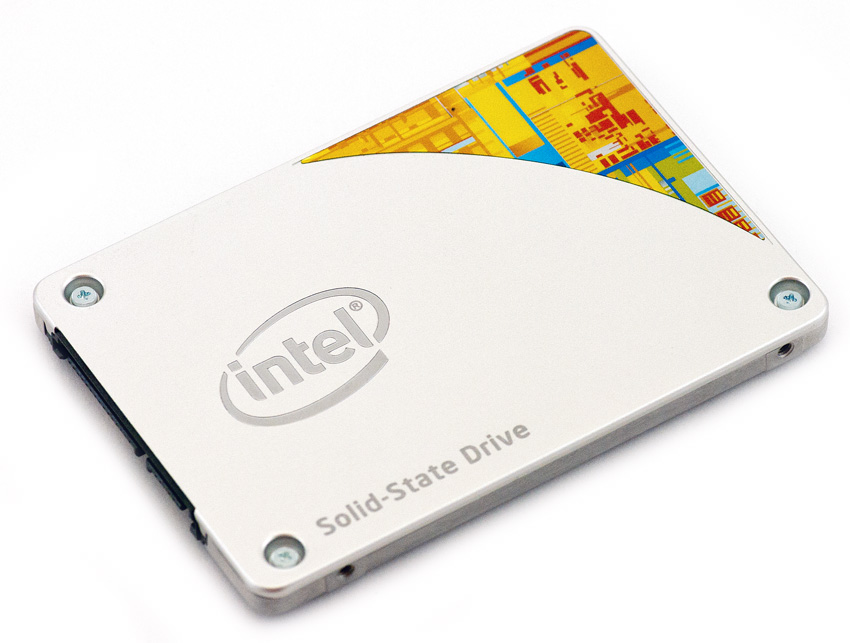 Looking at the connectors, we see the standard power and Serial ATA connectors. This drive is SATA3 (6G) and is backwards compatible with SATA2 as well; however, the bandwidth limitation would be capped to approximately 270 MB/sec with SATA2, which is still much faster than HDDs. 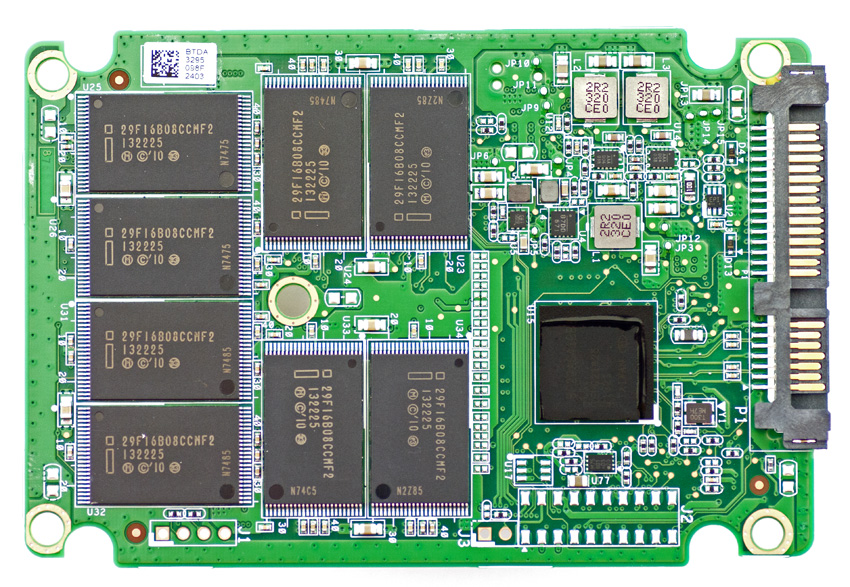 Under the hood, we will see that the Intel 530 makes use of Intel (Micron) 20nm MLC written NAND as well as a cross Intel/LSI-branded SandForce controller. 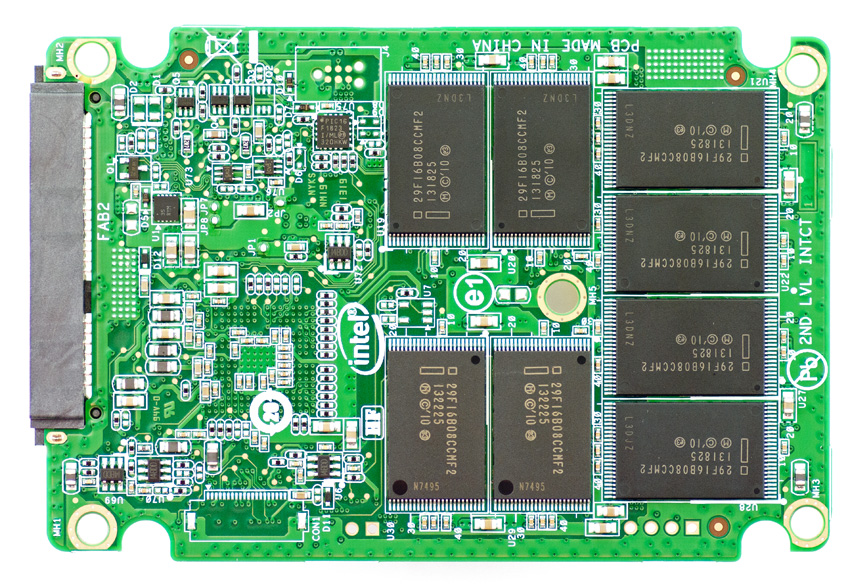 The bottom side of the circuit board includes 8 additional NAND packages, making the total sixteen.

Switching to smaller 4K random transfers, the Intel 530 SSD measured 7,876 IOPS read activity and 18,934 IOPS write activity in the repeating column and 7,421 IOPS read and 19,116 IOPS in the random column, which ranked last and upper middle of the pack respectively. Its SSD 520 brethren performed slightly better in write performance, with speeds of 20473 IOPS and 19682, repeating and random respectively. 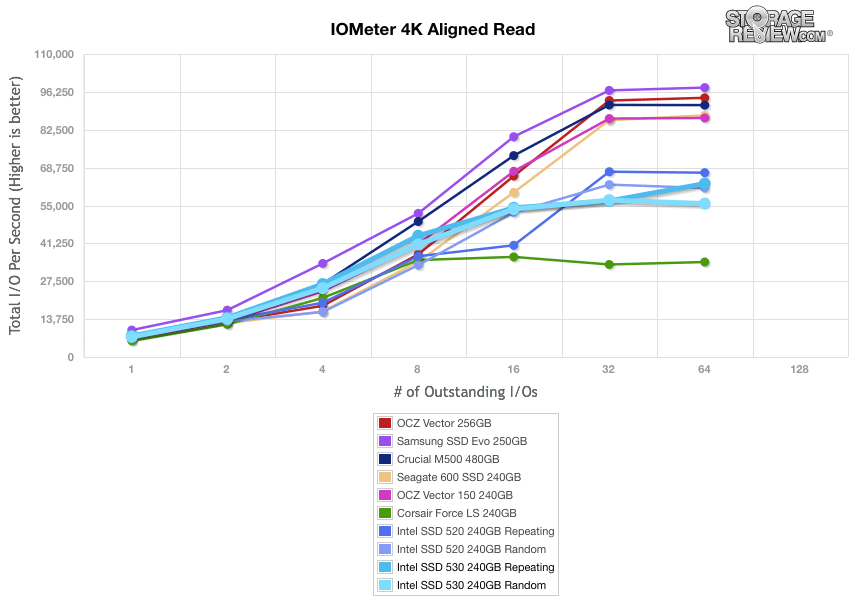 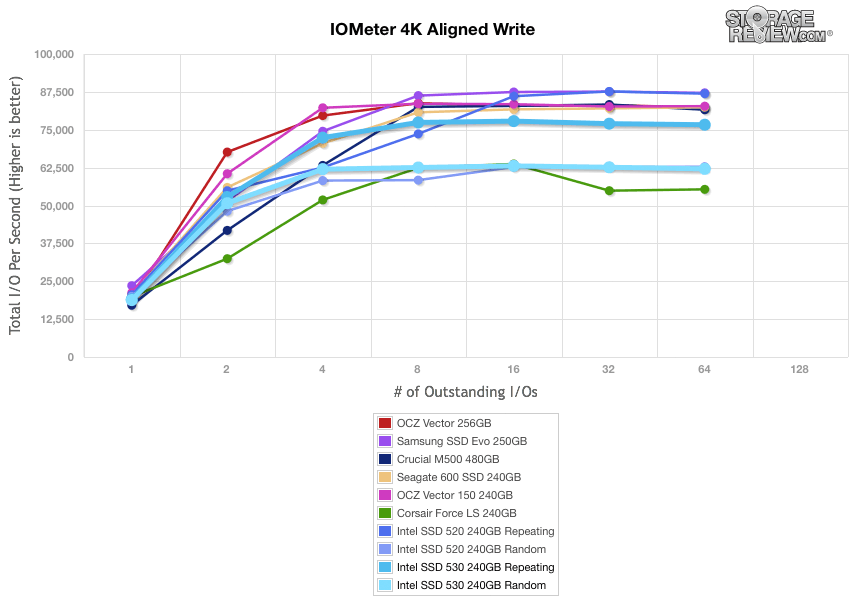 Comparing average write latency between each mainstream consumer SSD, the Intel 530 SSD ranked at the bottom of the pack with an average latency of 0.052ms and a peak latency of 10.00ms in the repeating column. As far as random goes, it performed virtually the same with 0.052ms average latency and peaking at 10.28ms. 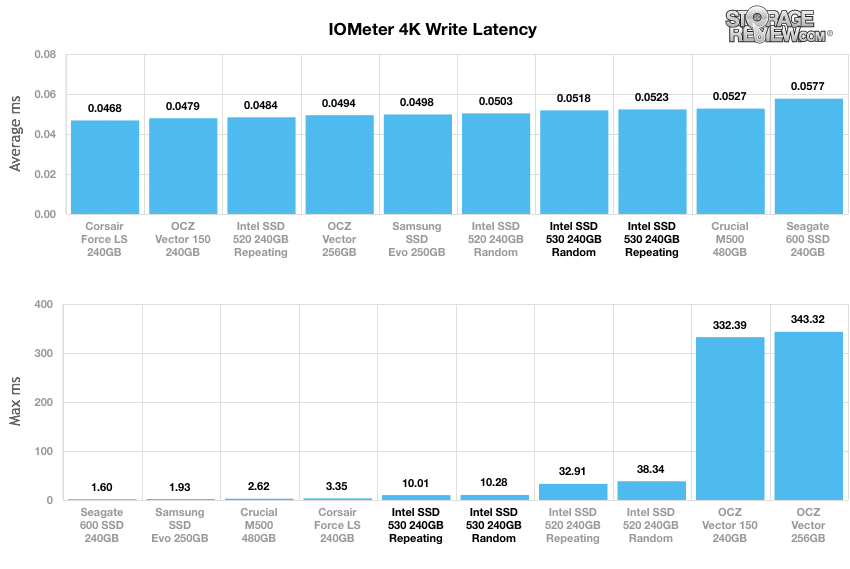 Our last series of synthetic benchmarks compare the hard drives in a series of server mixed-workloads with a queue depth of ranging from 1 to 128. Each of our server profile tests has a strong preference towards read activity, ranging from 67% read with our database profile to 100% read in our web server profile. In all of our mixed workloads, the Intel SSD 530 ranked near the middle of the pack.

The first is our database profile; with a 67% read and 33% write workload mix primarily centered on 8K transfer sizes. In the test, the Intel SSD 530 performed near the top of the pack by Q128 in the repeating column, though it did come up well short in the random column. Interesting enough, the Intel SSD 520 outperformed its successor. 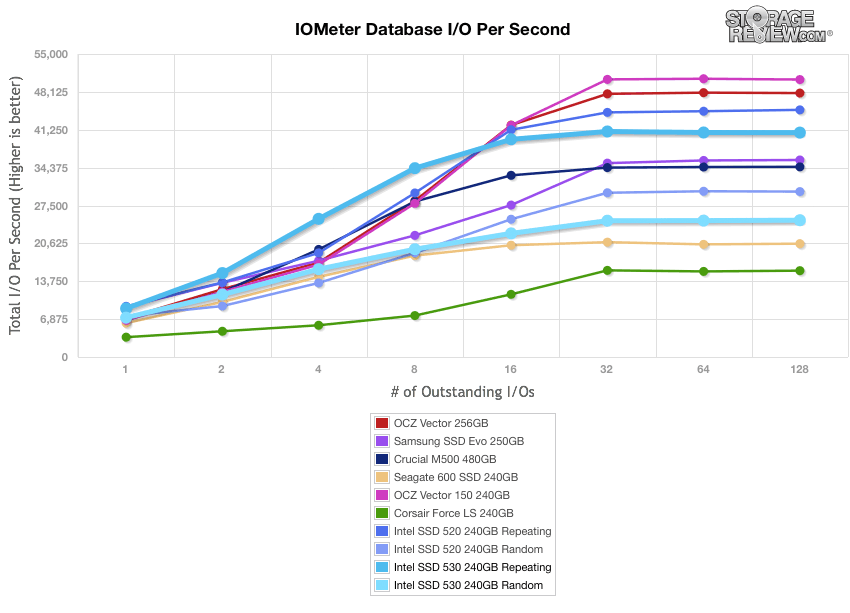 The next profile looks at a file server, with 80% read and 20% write workload spread out over multiple transfer sizes ranging from 512-byte to 64KB. The Intel SSD 530 delivered QD1 repeating throughput near the top of the pack and it stayed that way by Q128. Again, random throughput fell short by QD128. Our web server profile is read-only with a spread of transfer sizes from 512-byte to 512KB. The Intel SSD 530 drive provided performance in the lower middle. 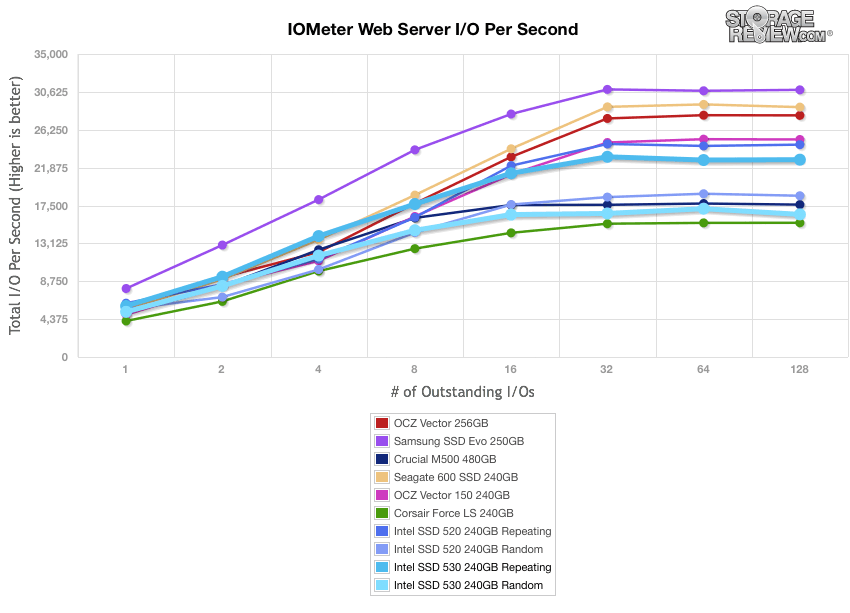 The last profile looks at workstation activity, with a 20% write and 80% read mixture using 8K transfers. In QD1, the Intel SSD 530 drive started at the top with 8,736 IOPS mark but ended up at near the middle of the leader board by Q128. 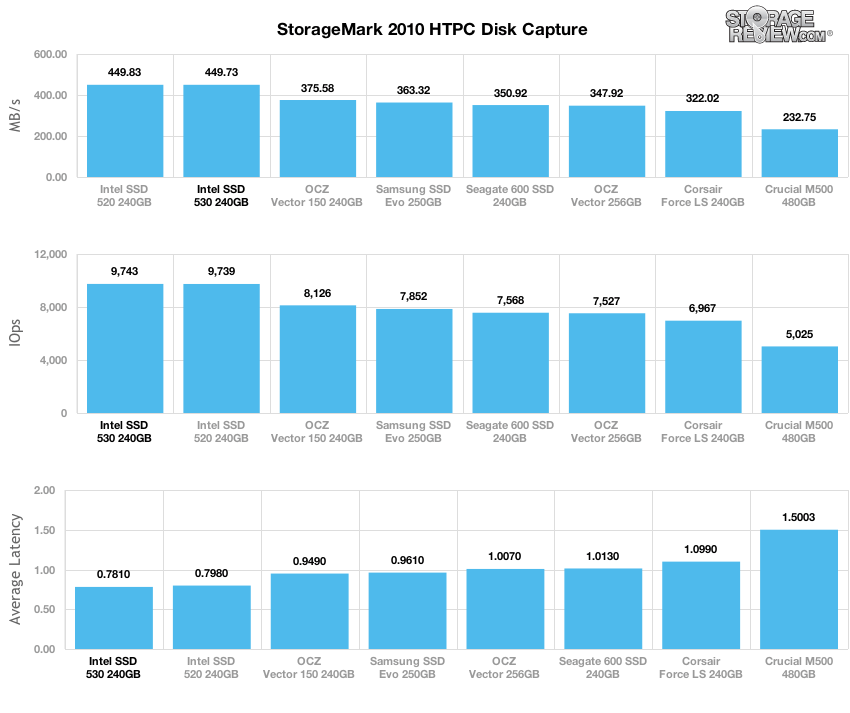 In our Productivity trace, the Intel SSD 530 and 520 continued its dominance, registering 10,649 IOPS and 11,635 IOPS respectively, taking the top spot by a significant margin. In our read-intensive Gaming trace, the Intel SSD 530 produced a respectable 457.2MB, right at the top of the pack.

The Intel SSD 530 line is a progressive addition to Intel’s family of SSDs and the successor to their 520 SSDs. One of the more attractive things about the 530 is that it ships in a plethora of mid-range capacities in several form factors including 80GB, 120GB, 240GB, 360GB, and 480GB.  Of course the drive is largely a good performer as well, boasting real-world test throughput that is very impressive from a 240GB drive; it will be interesting to see how the higher capacities stack up in their different form factors. Additionally, consumers will receive a five year warranty for the drives which is more or less the top of the market for client SSDs.

From a performance perspective, the Intel SSD 530 is highlighted by its strong performance in our real-world workloads, ranking very well in our HTPC and Productivity traces, while in at the middle of the pack in Gaming. Measuring single workloads, the Intel drives were mid to lower performers in 2MB sequential read speeds and remained that way in 4K random write speeds. Looking at mixed workload performance in our server profiles, the Intel 530 ranked middle of the pack, constantly trailing the 520 it replaces. Overall, the Intel SSD 530 proved itself to be a strong competitor in many of our consumer-focused workloads compared to other top-performing consumer SSDs.

With its top-tier real-world performance and affordable price point, the 530 is a worthy addition of Intel's line of SSDs. In addition to its five-year warranty and record of reliability, the Intel SSD 530 offers a well rounded feature set for mainstream consumers.