The Synology RackStation RS214 is a 1U feature-intensive storage solution measuring just 12″ deep, for small offices and workplaces, designed specifically with data sharing and office productivity in mind. Its 2-bay design allows for hot-swappable storage of up to 8TB, and is compatible with both conventional 3.5” HDDs and 2.5” HDDs and SSDs. The RS214 features a single core 1.2 GHz processor with floating-point unit and 512MB of RAM, providing solid performance for a modest price. Running the Synology Disk Manager operating system, the RS214 offers the user a rich array of software and add-ons, ranging from remote access, ability to host up to 30 websites and third-party applications, cloud transfer, built-in VPN and FTP, IP camera control, an integrated mail server, and more.

The Synology RackStation RS214 is a 1U feature-intensive storage solution measuring just 12″ deep, for small offices and workplaces, designed specifically with data sharing and office productivity in mind. Its 2-bay design allows for hot-swappable storage of up to 8TB, and is compatible with both conventional 3.5” HDDs and 2.5” HDDs and SSDs. The RS214 features a single core 1.2 GHz processor with floating-point unit and 512MB of RAM, providing solid performance for a modest price. Running the Synology Disk Manager operating system, the RS214 offers the user a rich array of software and add-ons, ranging from remote access, ability to host up to 30 websites and third-party applications, cloud transfer, built-in VPN and FTP, IP camera control, an integrated mail server, and more.

Cross-platform file sharing and wide array of office applications are a huge theme for the RackStation RS214. The VPN server add-on supports up to 5 concurrent remote connections, ensuring private LAN and server access from anywhere. Additionally, the unit provides remote access through iPhone, iPad, Windows Phone, and Android through Synology’s “DS file” app, allowing mobile devices the freedom to access anything stored on the NAS.

With support for Windows, Mac, and Linux network environments, the RS214 ensures compatibility with nearly any small workplace configuration. The unit also integrates seamlessly with Windows Active Directory and LDAP, so using previously existing user accounts is no problem. In keeping with this multi-platform design, the RS214 also offers integrated backup solutions, with native Time Machine integration for OS X users and Synology Data Replicator software for PCs. Keeping office productivity in mind, the RS214 supports Web Station with PHP/MySQL, which allows the unit to host up to 30 websites and assorted applications. The mail server and mail station add-on packages also provide the user with an easy-to-use webmail platform ideal for growing office environments.

The contents of the RS214 can be easily secured against loss thanks to an integrated backup wizard, and cloud backup through Amazon S3 and Glacier is also supported. The optional Time Backup add-on package also allows administrators to keep track of and roll back previous file versions, safeguarding the user against accidental file deletion or overwriting. The RS214 also functions as a centralized monitoring hub for up to 8 IP cameras  (with one free license included) through Synology Surveillance Station. Camera footage both live and recorded can be accessed from anywhere via computer or iOS/Android device, providing an on-demand environmental security solution.

Synology made energy efficiency an important part of the design philosophy behind the RS214. Compared to PC components, the RS214 operates at a relatively low wattage (under 30 watts while active), in keeping with Synology’s commitment to environmentally-conscious production. The unit also sports power-saving features like Wake on LAN and scheduled power on/shut down, cutting down the RS214’s power consumption and further reducing its energy footprint.

The RackStation RS214 is a 1U rack-mounted NAS designed with small office telco racks in mind and a focus on the full range of features normally found in larger environments. The front of the NAS sports two hot-swappable 3.5″ bays, which can store up to 8TB of data using both 3.5″ and 2.5″ HDDs/SDDs. The bays also feature built-in locking mechanisms to prevent accidental drive removal in a production environment. To the left of the LED indicators and power switch, you’ll find two of the unit’s USB ports.

The right side of the unit contains the three 40mm fans, while the clutter-free rear panel features power supply, an eSATA port, two additional USB ports, and two RJ45 ethernet ports. All in all, the RS214 offers a sleek, simplistic design that is functional and aesthetically-pleasing.

We tested both CIFS and iSCSI performance using RAID1 configurations of three popular 3.5″ 7,200RPM and 5,400RPM hard drives: the WD Red, WD Se and Seagate NAS, all 4TB. All three of the drives are suited to operate in NAS environments.

In order to fairly evaluate the performance of the Synology RackStation RS214, we need an environment that ensures that the RS214 is the I/O bottleneck rather than the network. Therefore this review employs a Lenovo ThinkServer RD240 running multiple Windows Server 2012 VMs in an ESXi 5.1 environment connected via a quad-port Intel i350-T4 NIC through a Netgear ProSafe GS752TXS switch.

For the first main round of workload testing, we measured a series of random 4k performance at 100% read and 100% write activity. The Western Digital Se iSCSI scored the highest throughput read activity with 479 IOps, with the Seagate NAS iSCSI and WD Red iSCSI running not far behind at 430 and 424 Iops respectively. At 274 IOps, the WD Se iSCSI also tests markedly better than the other two iSCSI units for write speed, performance which is more in line with the SMB results (beaten only by the WD Se SMB, and, by the narrowest of margins, the Seagate NAS SMB).

With a load of 16 Thread / 16 Queue, the WD Se iSCSI records the best average read latency at 533.15 ms and the second-best average write latency at 930.71 ms, beaten in that department only by itself in SMB configuration at 840.21 ms.

For our standard deviation results at the 4k benchmark, the WD Se SMB narrowly outperforms the Red SMB with a read deviation of 43.10 ms. In testing, the WD Se iSCSI again shines as the best write speed performer with a write deviation of 797.74 ms.

Our next testing benchmark measures 8k sequential throughput at 16T/16Q with 100% read/write load. Of the SMB units, the WD Se SMB again rates the best read throughput at 10,188 IOps, though the difference between the three SMB units tested is marginal. The Seagate NAS SMB is able to pull ahead of the pack with a slight increase in write throughput at 6,029 IOps. Of the iSCSIs, read performance is fairly linear, though the Seagate NAS iSCSI scores markedly better than its WD counterparts in write throughput, clocking in at 4,125 IOps.

Changing from a 100% workload to a mix of 70% read/30% write with transfer sizes of 8k, the WD Se iSCSI provides the greatest throughput of the units tested on all fronts, from 2T/2Q to 16T/16Q. Of the SMB units, the WD Se again provides the best results, while the WD Red SMB and Seagate NAS SMB are virtually identical. 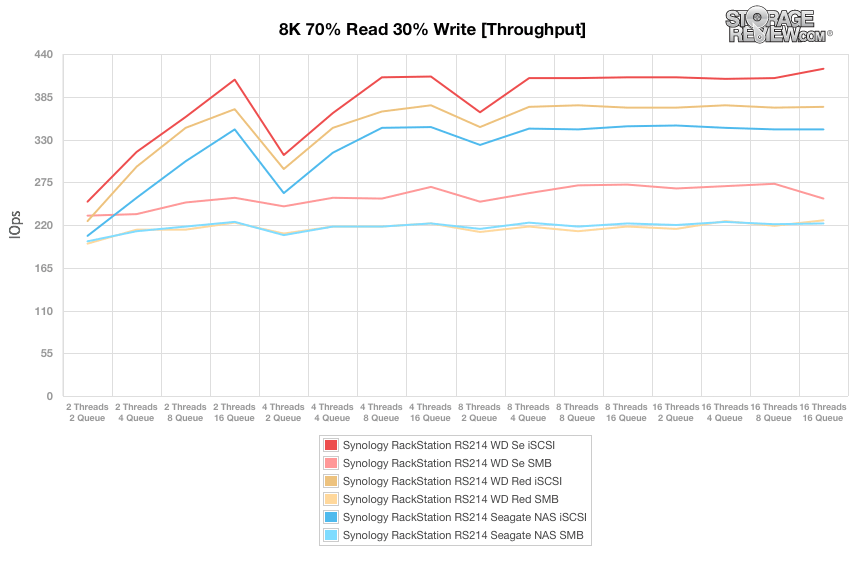 At lower thread counts and queue depths, all units perform with an average latency under 150ms. However, as the T/Q count rises, the difference becomes clearer, with the WD Se iSCSI outperforming its peers with an average latency just over 600ms at 16T/16Q. Using SMB, the WD Se offers the best performance of the SMB units, while the Seagate NAS SMB and the WD Red SMB remain almost indistinguishable from each other. 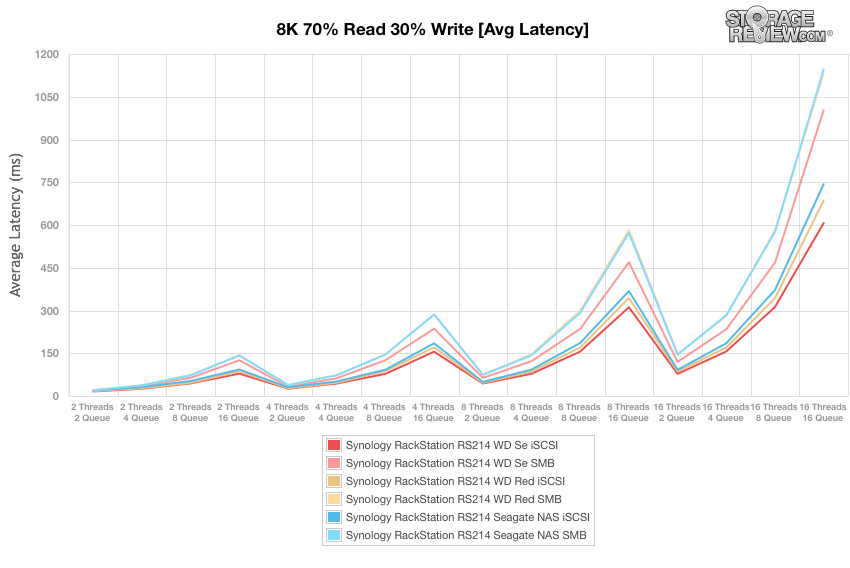 Recording maximum latency gives us a slightly more dense view of performance at the worst latency. The WD Se iSCSI provides the best maximum latency for the majority of the testing regimen, however at higher thread counts and queue depths, its dominance over the others is called into question, as it’s bested at various points by all. Interestingly, though the record the best performance in iSCSI, the WD Se and Red perform the worst of the bunch using SMB. In the end, at 16T/16Q, the best max latency recorded was provided by the WD Red iSCSI. 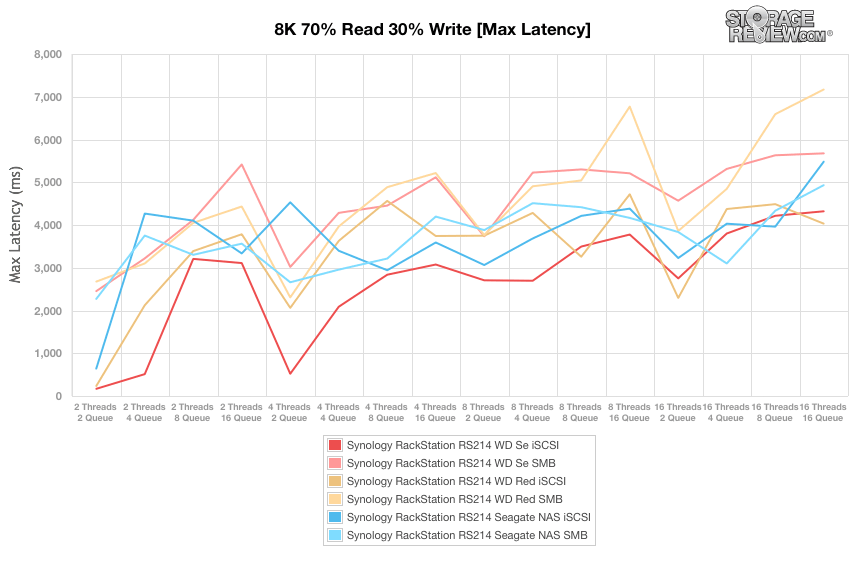 The WD Se iSCSI emerges again the victor with lowest overall standard deviation in this benchmark. The best SMB performance was recorded by the Seagate NAS SMB, while the two Western Digital units (the Se and the Red) were again functionally identical. 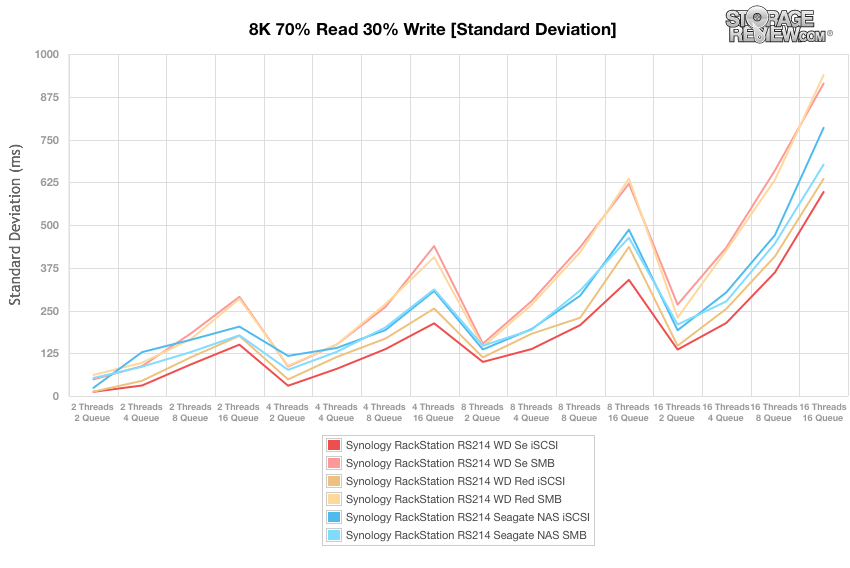 The final benchmark in our testing regimen is a 128k speed test with a 16T/16Q load on 100% read and write activity. Pulling ahead with the highest throughput overall is the Seagate NAS SMB at 115,716KB/s read and 108,376KB/s write; however, its performance lead is not very substantial, and all three SMB units recorded roughly the same throughput results. The Seagate NAS iSCSI posts the best read throughput at 92,451KB/s, while the WD Se iSCSI edges it out for write throughput at 87,343KB/s.

The Synology RackStation RS214 is, as the name implies, a 2-bay rack-mount NAS designed for small offices or remote offices that need NAS features but have minimal storage capacity or user count needs. While the unit’s small size and ease of setup might lead some to incorrectly believe it trades performance for simplicity and ease of use, it proves to be more than up to the task for which it was designed. The RS214 is crammed with features and optional add-ons befitting a NAS of greater size and price. The RS214’s focus on features ensures that smaller office environments do not lack a wide array of bells and whistles found in larger workplaces.

The clear top performer in our series of tests with the RS214 is the Western Digital Se. With the slightly higher price tag of this 7200 RPM drive comes increased performance in most aspects over the more cost-effective units tested. In our 4k throughput performance test, the WD Se iSCSI lead the pack at 479 IOps read / 274 IOps write. In our 8k throughput test, the WD Se registers the best read throughput at 10,188 IOps. The WD Se also sports the best average read/write latency and best maximum latency overall. In most cases, the more cost-effective WD Red and Seagate NAS proved to be nearly identical in performance testing with SMB. With iSCSI, the WD Red tended to either perform slightly better than or roughly equal to the Seagate NAS.

The Synology RackStation RS214 is a compact NAS for small environments that doesn’t skimp on features or performance. Its ease of use and pleasing design make setup and storage simple, and it doesn’t trade small size for lack of available features.