Released today, the Intel SSD 660p Series is the company’s first client SSD to ship with 64-layer QLC (quad-level cell) 3D NAND. What this means to the end user is a less expensive SSD that has a reasonable performance profile. As will be true for most QLC SSD launches, the conversation is going to be about finally having an SSD that can replace HDDs both in terms of price and capacity. The 660p for its part is positioned as an NVMe SSD in a single-sided m.2 form factor that will accelerate the demise of HDDs and value-based SATA SSDs in client computing. The 660p is part of the larger Intel portfolio play that include faster drives based on TLC and Optane that hit mainstream and performance use cases.

Released today, the Intel SSD 660p Series is the company’s first client SSD to ship with 64-layer QLC (quad-level cell) 3D NAND. What this means to the end user is a less expensive SSD that has a reasonable performance profile. As will be true for most QLC SSD launches, the conversation is going to be about finally having an SSD that can replace HDDs both in terms of price and capacity. The 660p for its part is positioned as an NVMe SSD in a single-sided m.2 form factor that will accelerate the demise of HDDs and value-based SATA SSDs in client computing. The 660p is part of the larger Intel portfolio play that include faster drives based on TLC and Optane that hit mainstream and performance use cases. 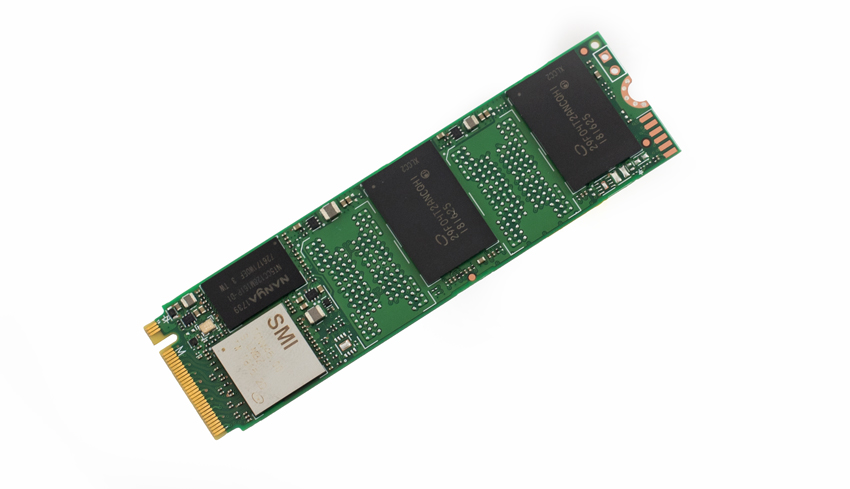 Out of the gate the 660p comes in 512GB, 1TB and 2TB capacities with MSRP starting at $99 for the 512GB model and $199 for the 1TB. With such aggressive pricing, the natural reaction is to be concerned about performance. The 660p has a pretty good profile, especially for the intended value-centric audience. Using an on-board SLC NAND cache, the 660p is quoted to deliver sequential read/write of 1800/1800 MB/s. Random read/write 4K IOPS are also balanced at 220k/220k. Intel wants to be sure customers expect reliability and longevity out of the new QLC drives by including a 5-year warranty. Endurance figures are quoted at 100TBW for the 512TB drive, scaling to ~400TBW for the 2TB capacity. 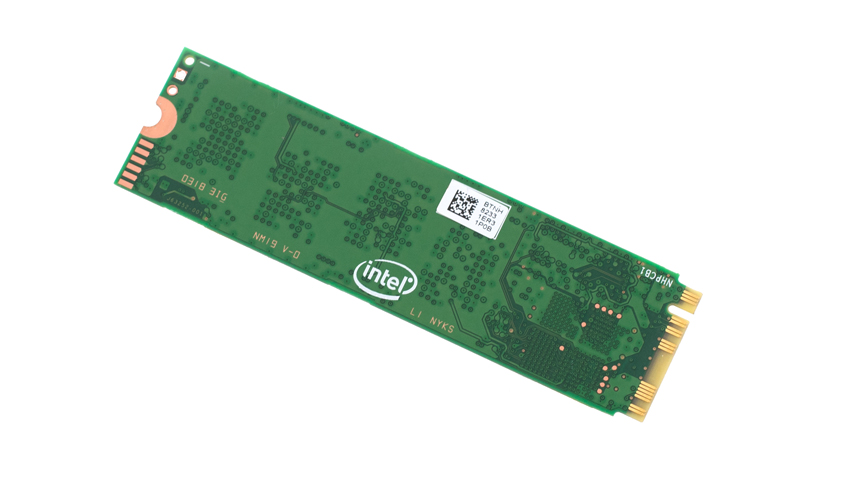 Taking a deeper look at performance, Intel has architected the 660p for what they describe as “real world” workloads. In this case that means handling burst workloads that have a good deal of idle time in between. Further Intel takes advantage of the idle time to adjust the drive’s behavior to deliver a better experience by expanding/contracting the SLC cache into/out of the QLC NAND. Specifically this means handling the preponderance of end-user workloads like productivity applications and streaming services that often fall in the read/write bands of 60/40 to 80/20. For users desiring a little more manual control, Intel offers a performance boost mode via the Intel Toolbox software that manually flushes the SLC cache so inbound workloads are prioritized.

The Intel SSD 660p posted a score of 4,070.6 seconds, placing it near the bottom of the leaderboard. 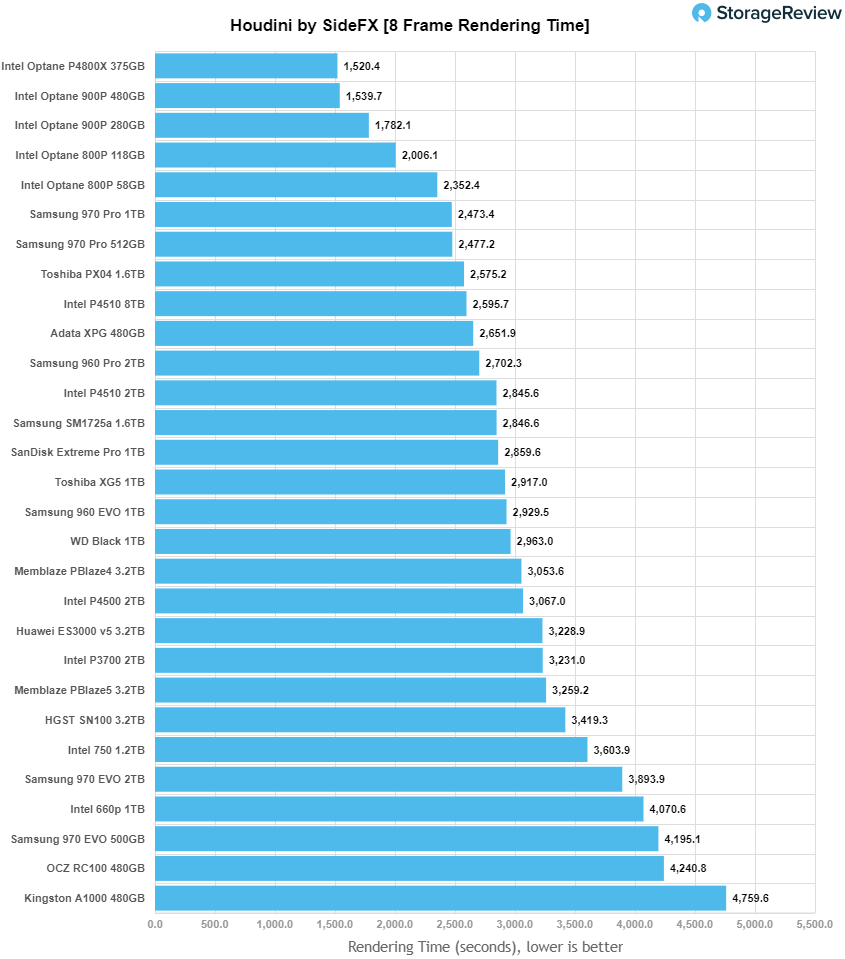 When looking at SQL Server Output, the Intel SSD 660p expectedly placed well behind the rest of the pack with a score of 2,613.3 TPS.

The peak 4K performance of the Intel 660p drive was 60,604 IOPS at a latency of 2,095μs, which placed it well behind even the slowest drive.

Write performance told a similar story, as the drive peaked at just 26,456 IOPS with a very high latency of 4.824ms.

Switching over to sequential work with 64K tests didn’t show any improvements. Here, the new Intel drive had a last-place performance of 3,605 IOPS or 225MB/s at a latency of 4.44ms.

Looking at sequential 64K writes shows very uneven results as is made clear in the charts below. Here, the Intel 660p drive well behind again with a peak performance of 1235.4 IOPS or 77.21MB/s with a latency of 12.9ms.

Next, we looked at our VDI benchmarks, which are designed to tax the drives even further. These tests include Boot, Initial Login, and Monday Login. Looking at the Boot test, the Intel 660p had peak performance of 24,164 IOPS with a latency of 1346.1μs, which was again well behind all other tested drives.

In our VDI Initial Login the Intel 660p drive come in last with more uneven performance, peaking at 8404 IOPS and 3.04ms in latency.

The Intel 660p drive followed the same performance path in our last test, VDI Monday Login, with a peak performance of 10,403 IOPS and a latency of 1534μs.

Intel’s new value-driven SSD is part of a larger portfolio that consists of much faster drives; however, the 660p is designed specifically to replace HDDs and SATA SSDs as the most viable and least expensive option for client-based systems.  With its current price point, it certainly makes this case, though the 660p’s performance is low enough to cater to only those looking for a minimal upgrade from an HDD-based workstation. Intel’s new line does offer some pretty decent reliability features as well, with endurance numbers quoted at 100TBW for the 512TB drive (~400TBW for the 2TB capacity) bundled with a 5-year warranty.  Users also can leverage a boost mode using the Intel Toolbox software, which manually flushes the SLC cache so inbound workloads are prioritized.

Looking at performance of the drive showed no surprises, as it was well behind the more expensive drives we compared it to. In the Houdini test the drive posted 4,070.6 seconds placing it near the bottom. In SQL Server the drive had 2,613.3 TPS and an average latency of 998ms, placing well behind the rest pack, while our VDI workload analyses showed more or less the same budget-friendly results. It was able to hit 4K peaks of 26,456 IOPS write and 60,604 IOPS read, with 64K scores of 225MB/s read and 77.21MB/s write. In our VDI tests the drive hit 24,164 IOPS boot, 8404 IOPS initial login, and 10,403 IOPS Monday login.

Alright, so against other SSDs, the 660p doesn’t look so hot, but this was to be expected going in. QLC SSDs, at least initially, aren’t going to be picked for performance. They’re going to be selected for a dollar/GB value play, as well as all of the inherent benefits of flash over magnetic HDD storage like lower power draw, resistance to physical damage like drops and less heat output. It’s been ages since we reviewed a new client 2.5″ HDD, but last time we did, the 2TB drive posted 4K random read IOPS of a little under 100, where we’re looking at 60,000 with the 660p. And while the sequential tests we run today aren’t exactly the same as they were with the HDDs, the 660p puts up large block sequential reads of 225MB/s and writes of 77MB/s where the HDD saw about 115MB/s and 110 MB/s respectively. So in terms of the market Intel is looking to address with the 660p, they hit the target successfully. The 660p is designed to fill a need at the mobile bulk storage end of the spectrum and continues the attack on 2.5″ HDDs, who’s days are clearly numbered.