Intel is expanding its 3D NAND SSDs and its NVMe footprint with today’s release of the Intel SSD 760p Series. This M.2 SSD leverages an NVMe interface and the benefits that one would expect from it: mainly a performance increase and lower power consumption. The M.2 form factor also makes it ideal for mobile platforms such as ultra-thin notebooks.

Intel is expanding its 3D NAND SSDs and its NVMe footprint with today’s release of the Intel SSD 760p Series. This M.2 SSD leverages an NVMe interface and the benefits that one would expect from it: mainly a performance increase and lower power consumption. The M.2 form factor also makes it ideal for mobile platforms such as ultra-thin notebooks. 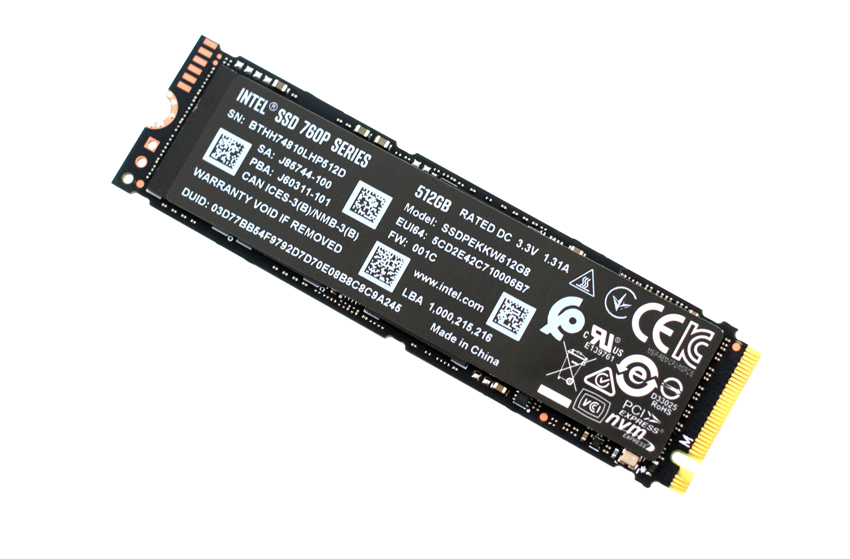 The new SSD series comes in capacities ranging from 128GB up to 2TB. Intel states that its floating gate NAND technology allows it to hit higher capacities with better manufacturing efficiency. So for interested buyers, the Intel SSD 760p has quite a bit of storage in its M.2 footprint, as well as quoted speeds of 3.23GB/s sequential read and up to 340K IOPS random read.

The Intel SSD 760p is an M.2 “gum stick” SSD. One side has the NAND packs and controller and is covered by a sticker with important information such as name, model number, and capacity.

On the flip side is a blank PCB; however, the 2TB model will also have NAND packs on this side.

The lightweight SQL Server VM is configured with three vDisks: 100GB volume for boot and a 350GB volume for the database and log files, and a 150GB volume used for the database backup we recover after each run. From a system resource perspective, we configured each VM with 16 vCPUs, 32GB of DRAM and leveraged the LSI Logic SAS SCSI controller. This test uses SQL Server 2014 running on Windows Server 2012 R2 guest VMs, and is stressed by Dell’s Benchmark Factory for Databases.

For our transactional benchmark, the Intel 760p was able to hit 3,135.9 TPS, placing it second to last in the test but only 24TPS from the top spot. 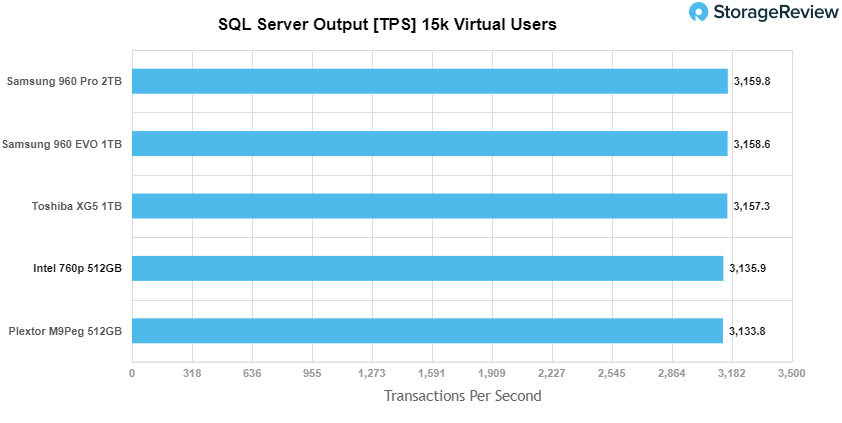 For our SQL average latency, the Intel 760p had a latency of 40ms, while not terrible, it is much higher that the top performers that ran from 4-8ms.

StorageReview has rolled out an updated assortment of tests for end-user SSDs, which are designed to look more at IOPS or throughput in relationship to latency. These benchmarks have been honed at a much larger scale for enterprise drives; for client SSDs, we decrease the loads to more common workload sizes. Testing is done within VMware ESXi 6.5 with a 20GB test footprint, comprised of two 10GB vdisks that are placed onto a datastore presented off the SSD under load.

Looking at peak random 4K read performance, the Intel 760p was able to maintain sub-millisecond latency performance until around about 125K IOPS and peaked at 126,863 IOPS with a latency of 2.01ms. This put it in the bottom of the pack.

For peak random 4K write performance, the Intel drive performed better with sub-millisecond latency performance throughout its runs, peaking at 141,017 IOPS with 798μs, placing it right in the middle of the pack.

For sequential performance, we looked at our 64K benchmarks. For read, the Intel 760p was able to maintain sub-millisecond latency until about 10K IOPS or 645MB/s and peaked at 12,751 IOPS or 792MB/s with a latency of 2.51ms. This placed the drive in the middle to lower range in our pack.

For sequential 64K write, the Intel had latency of less than 1ms until about 8K IOPS or about 500MB/s and peaked at 9,392 IOPS or 587MB/s with a latency of 1.7ms. Once again, it ended in the lower end of the pack or third from bottom.

Next we looked at our VDI benchmarks that tax the drives a bit more; these tests include Boot, Initial Login, and Monday Login. For the Boot test, the Intel 760p was able to maintain sub-millisecond latency until just shy of 57K IOPS and peaked at 65,083 IOPS with a latency of 986μs.

For the VDI Initial Login we see similar placement for the Intel. The drive had sub-millisecond latency performance up until roughly 25K IOPS, peaking at 27,291 IOPS with a latency of 2.05ms.

For the final VDI Monday Login, the Intel had sub-millisecond latency performance until about 25K IOPS, peaking at 26,621 IOPS with a latency of 1.2ms. Again the drive was third from last.

The Intel SSD 760p series is an M.2, NVMe SSD aimed at PC and mobile platforms. The drive has capacities as high as 2TB and performance of over 3GB/s sequential read and up to 340K IOPS random read under certain conditions. The new drive leverages Intel’s floating gate NAND technology, helping it hit higher capacities while lowering manufacturing costs. This, in turn, allows the company to offer the drive for as low as $74 for the 128GB model.

The performance for the Intel 760p NVMe SSD is underwhelming but not bad per se when you consider it comes with an incredibly low entry price. The series itself offers capacities up to 2TB and very low initial pricing. Users who need the best performance will spend more on a higher-end drive, but users looking for a boost up from HDDs or older SATA SSDs will find a deal with the Intel 760p.

The Intel 760p offers a very cost-effective M.2 NVMe drive that will meet the needs of most mainstream users.