Intel’s X25-M SSD is the current industry standard holding the title as one of the best flash storage drives money can buy. Last year Intel made their best drive even better by decreasing the flash manufacturing process from 50nm to 34nm, substantially reducing the cost of the SSD and making the X25-M even more affordable for consumers. Read our full review to see how well the 160GB Intel X25-M performed in our tests.

Intel’s X25-M SSD is the current industry standard holding the title as one of the best flash storage drives money can buy. Last year Intel made their best drive even better by decreasing the flash manufacturing process from 50nm to 34nm, substantially reducing the cost of the SSD and making the X25-M even more affordable for consumers. Read our full review to see how well the 160GB Intel X25-M performed in our tests. 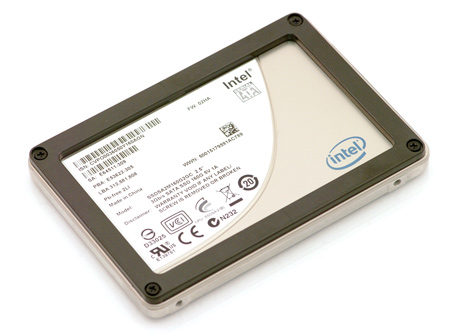 The Intel X25-M G2 SSD has a clean aluminum body with a plastic trim ring secured to the top border of the drive. The X25-M has a very basic OEM look to it without a lot of the flashy looks of other SSDs currently on the market. What it does offer is a down-to-earth design that looks sophisticated and durable. 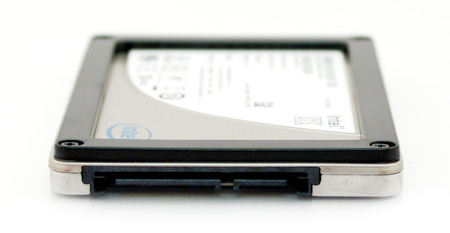 Case durability is excellent and besides the SATA connector you could probably toss this drive at a wall and cause more damage to the wall than the X25-M. The case has no give at all and feels like a solid block of metal. The bumper ring around the top allows the drive to fit multiple form-factors depending on the requirements of the desktop or laptop it is being installed in. The drive height without the bumper is 7mm while the height with it installed is 9.5mm (standard notebook drive height). 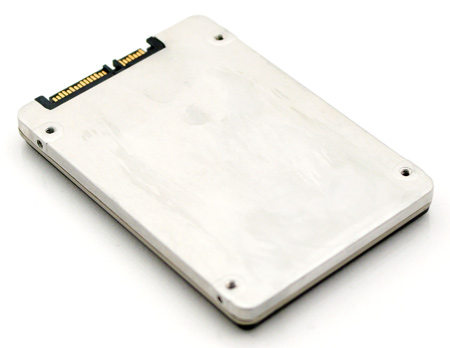 The Intel X25-M is very easy to take apart after removing four Phillips head screws. The same screws that hold the 2.5mm shim to the body of the drive hold the two case halves together. Once those are removed the entire assembly pops apart. 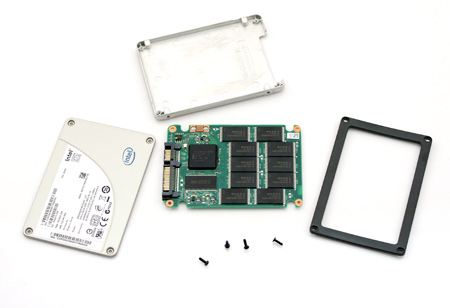 Inside we see the neatly designed circuit board that utilizes only a single side of the PCB. Intel uses their own pc29as21ba0 controller and 29f16b08jamdi flash memory. The board is made up with ten 16GB modules with a 32MB ISSI DDR buffer. 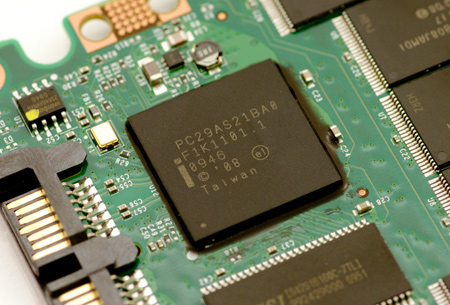 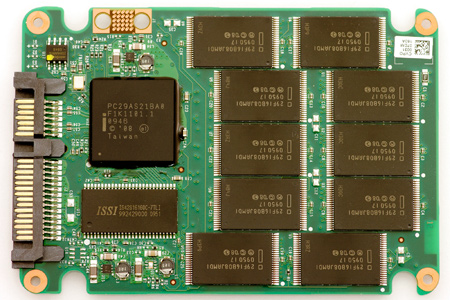 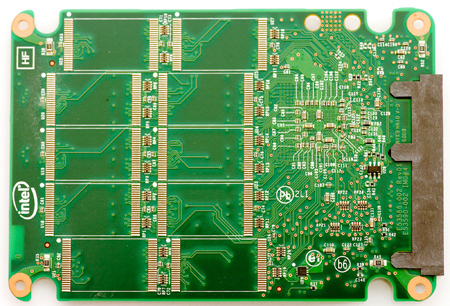 Intel advertises a read speed of up to 250MB/s and a write speed of up to 100MB/s on the 160GB X25-M. In our initial out of the box sequential 2MB transfer test we recorded a read speed of 250MB/s and a write speed of 100MB/s which is right on the money in terms of advertised claims. Notice that the Intel actually comes in last in sequential write speed. At the time of running this benchmark our drive had 300GB written to it as indicated by its SMART information. 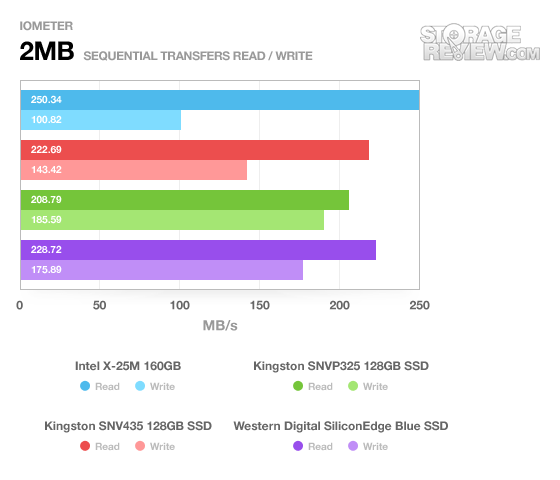 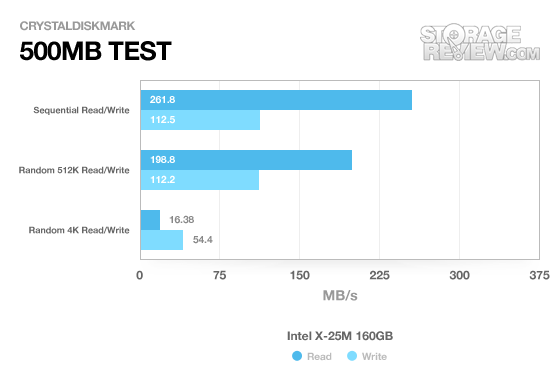 In our 2MB random transfer test the Intel X25-M held the lead with a 214MB/s read speed but was second to the SiliconEdge Blue inrandom write speed. The Western Digital SiliconEdge Blue was about 50% faster than the X-25M. 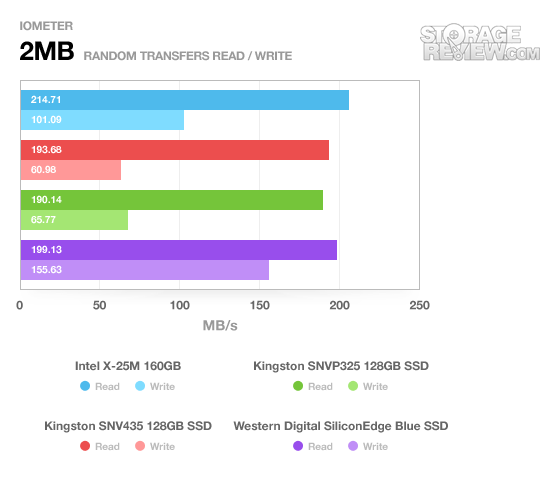 As we test with smaller random transfer sizes we see the strengths of the Intel SSD. The X25-M is slightly ahead in random 4K read speed but blows the other drives out of the water when it comes to 4K random write speed. The X25-M ended up being 180% faster than the runner-up (SiliconEdge Blue). 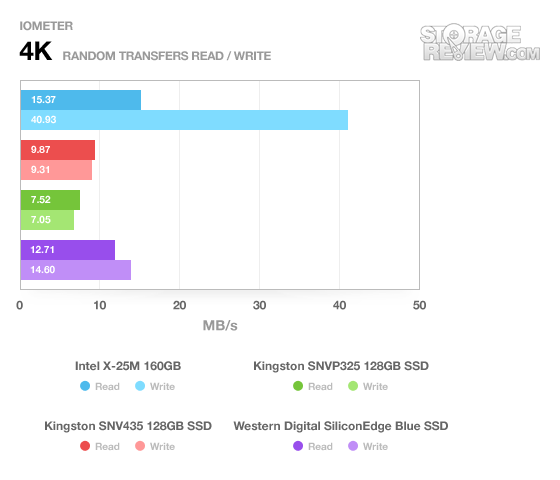 Looking at the transfer I/O the picture becomes even clearer. The SiliconEdge had a recorded average of 3,700 IOps whereas the Intel X25-M recorded over 10,000 IOps. 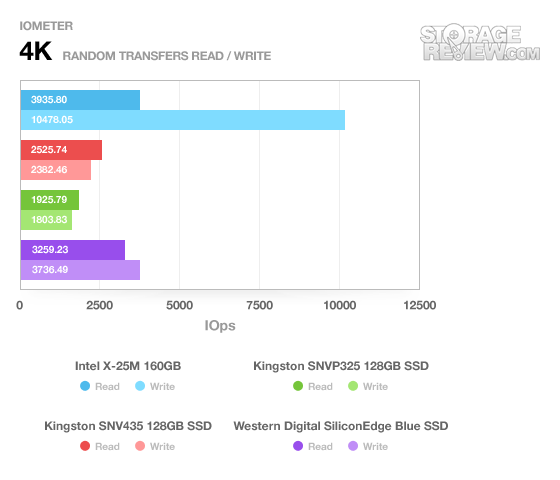 Average write latency on the X25-M was the lowest coming in at 94µs or 0.094ms. Intel’s spec sheet listed a write latency value of 85µs which wasn’t too far off from what we recorded. The next closest SSD was the SiliconEdge with a write latency of 250µs. Max latency was a different story with the Kingston SNV325 taking the lead with 55ms and the Intel X25-M coming in third with 289ms. 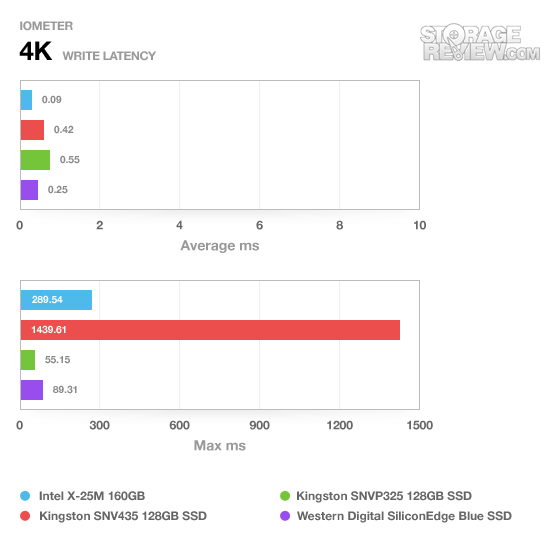 The following server and workstation profiles again show that the Intel SSD excels in areas with high amounts of random transfer and multiple requests. It has the slowest sequential write speed out of the entire group but it blows the others out of the water with its fast I/O speed. 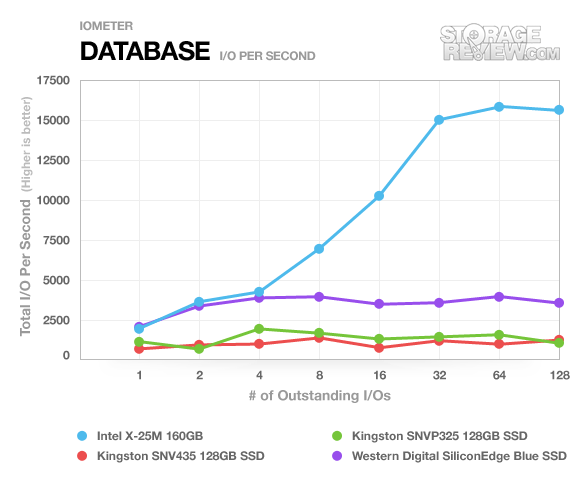 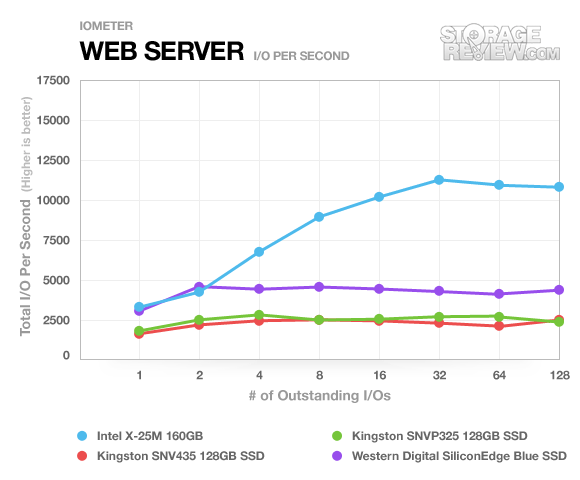 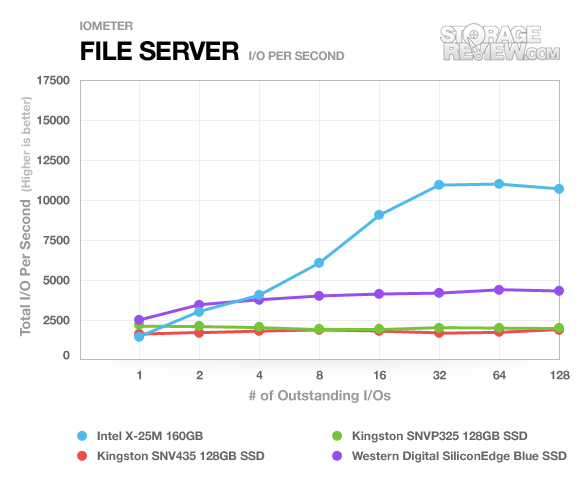 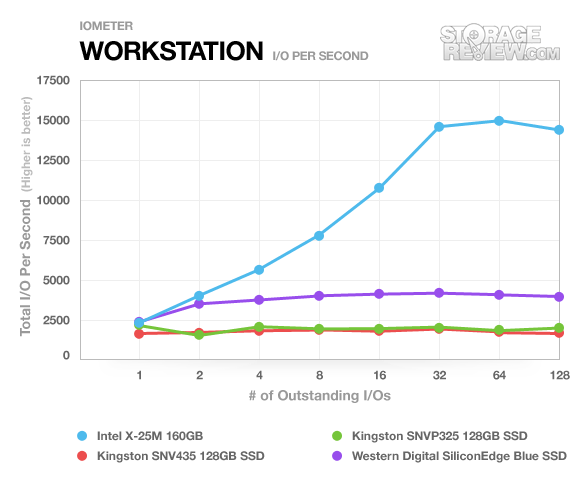 Now for the average user you might be asking when your drive could ever be stressed to the point of these tests. Below in our StorageMark 2010 benchmarks we address this with traces under real-world situations.

The first test we show how the drives perform under a HTPC scenario. In our HTPC test we include: playing one 720P HD movie in Media Player Classic, one 480P SD movie playing in VLC, three movies downloading simultaneously through iTunes, and one 1080i HDTV stream being recorded through Windows Media Center over a 15 minute period. Our trace is played back faster than real-time with the faster drives scoring higher MB/s and higher IOPs with lower latency. In this particular test the Intel X25-M has more than a 20% lead over the closest drive… the SiliconEdge Blue. 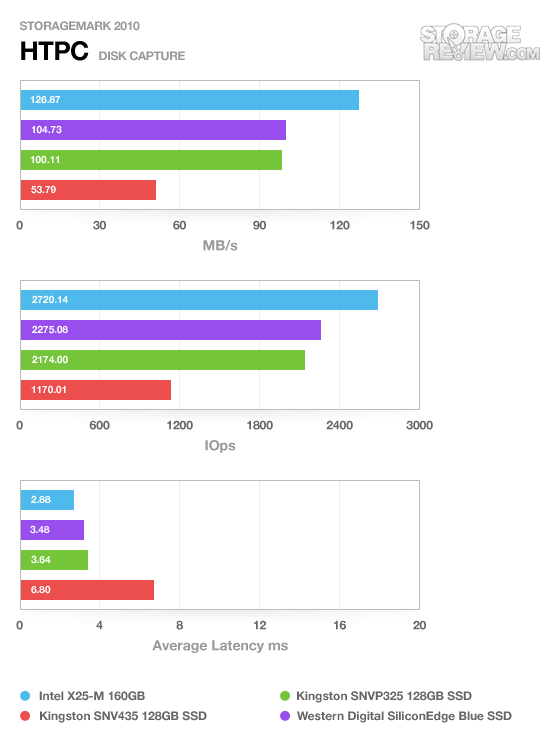 Another trace we are introducing with this review is the Productivity scenario. For all intents and purposes this test shows drive performance under normal daily activity for most users. This test includes: a three hour period operating in an office productivity environment with 32-bit Vista running Outlook 2007 connected to an Exchange server, web browsing using Chrome and IE8, editing files within Office 2007, viewing PDFs in Adobe Reader, and an hour of local music playback with two hours of additional online music via Pandora. While the HTPC trace had a high percentage of large transfers, the Productivity trace has a high percentage of small transfers with increased random activity. The Intel X25-M really flexed its muscles in this particular benchmark. It came out with more than a 50% lead over the SiliconEdge Blue. 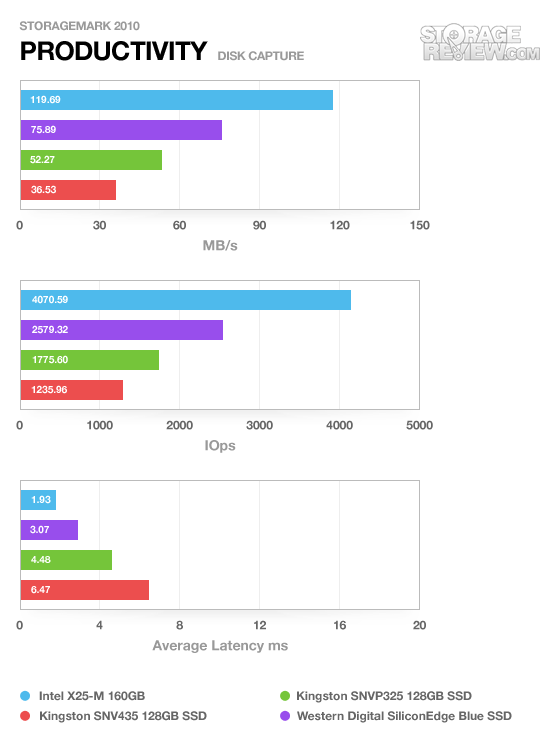 The Intel X25-M SSD had excellent power consumption and was lower than the Western Digital SiliconEdge Blue and Kingston SSDNow V+ in constant write activity as well as constant random 4K read acitivty. We didn’t notice any surge in power surrounding random write activity with TRIM background processes like the Kingston or Western Digital SSDs. Since most SSDs will be spending most of their life sitting at idle drawing very little power, most will offer modest boost in battery life compared to a hard disk drive. 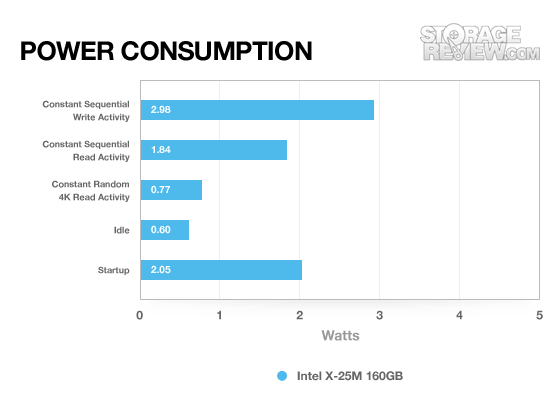 Intel gives a three-year warranty on their current SSD models including the X25-M. Three years is currently the most offered by any SSD manufacturer and is also matched by Western Digital, Kingston, and others.

If this review has showed us one thing, it is that fast sequential transfer speeds aren’t important in the whole scheme of things. Out of the four SSDs we tested the Intel X25-M had the slowest sequential write speeds by far. This changed when we shifted our focus to tests which used random and small transfer requests which are seen more in the real-world… unless you only copy large files. In our real-world StorageMark 2010 benchmarks the Intel showed a strong lead in playing back both our HTPC and Productivity traces. If you are in the market for a new SSD the Intel X25-M offers solid performance at a great price. Currently the 80GB model sells for as little as $220 through many online retailers with the 160GB model priced higher at $440.

The Intel X25-M SSD offers a unique combination of performance and reliability, making it our top choice in the mainstream SSD category.