The new iXsystems FreeNAS Mini is a power efficient home and small office NAS featuring an 8-core 2.4GHz Intel CPU and 16GB of RAM (upgradable to 32GB). The Mini, which was developed with the FreeNAS community in mind, utilizes ECC RAM, which reduces its possible error rate compared to previous models. The Mini of course features all of the FreeNAS goodies like compression and optional data deduplication, which is unavailable in other NAS consoles in its class, maximizing its 16TB of storage space and eliminating superfluous reiterations. It is the most customizable (both in terms of hardware and interface) NAS in its class and its free operating system has an active developer community, producing new (and free) updates regularly. Although the FreeNAS interface is not as user-friendly as others in the Mini’s class (like Synology and QNAP), once users become familiarized it can be a very efficient system to manage with an extensive feature set and leading data reliability thanks to ZFS.

The new iXsystems FreeNAS Mini is a power efficient home and small office NAS featuring an 8-core 2.4GHz Intel CPU and 16GB of RAM (upgradable to 32GB). The Mini, which was developed with the FreeNAS community in mind, utilizes ECC RAM, which reduces its possible error rate compared to previous models. The Mini of course features all of the FreeNAS goodies like compression and optional data deduplication, which is unavailable in other NAS consoles in its class, maximizing its 16TB of storage space and eliminating superfluous reiterations. It is the most customizable (both in terms of hardware and interface) NAS in its class and its free operating system has an active developer community, producing new (and free) updates regularly. Although the FreeNAS interface is not as user-friendly as others in the Mini’s class (like Synology and QNAP), once users become familiarized it can be a very efficient system to manage with an extensive feature set and leading data reliability thanks to ZFS. 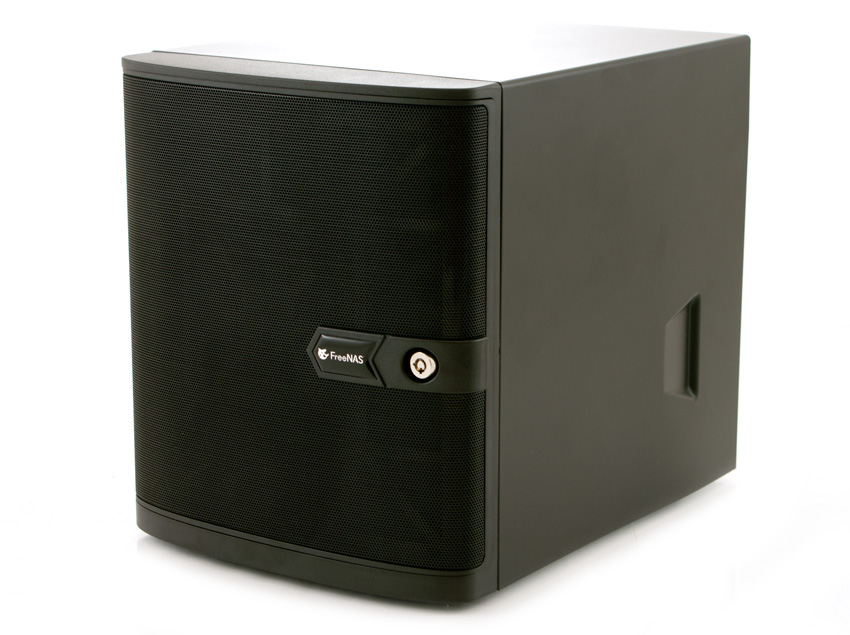 Despite its learning curve, the FreeNAS includes many features that would be attractive to users. Snapshots of any filesystem can be made, stored and easily managed. When ZFS snapshots are duplicated for backup, they are sent to a remote ZFS filesystem and protected against any physical damage to the local ZFS filesystems. Subsequent snapshots are compared the preexisting ones, and only the information that changed between snapshots is updated, reducing the size of each backup. FreeNAS uses RAID-Z software to protect backed up files with single or dual parity protection and is compatible with Windows Backup, Apple Time Machine, rsync, and PC-BSD Life Preserver. Files that are uploaded to the fileservers can be encrypted per-pool with or without a passphrase and accessed with any major operating system. FreeNAS has also allowed third parties to create plugins for its interface, including plugins optimized for additional backups, torrenting, or gaming functions (users can also create their own plugins).

The iXsystems FreeNAS Mini chassis is larger and less refined than other NAS units targeted to the SOHO audience. The unit feels a little industrial by comparison, but the FreeNAS audience is typically less concerned with glitz. The larger size does have benefits though. The interior of the Mini has a lot of open space which accounts for its added bulk. This allows users to add additional hardware in customization (e.g. users can add 2.5" hard drives as well as a PCIe network card) giving the Mini more hardware flexibility than other devices in this class. 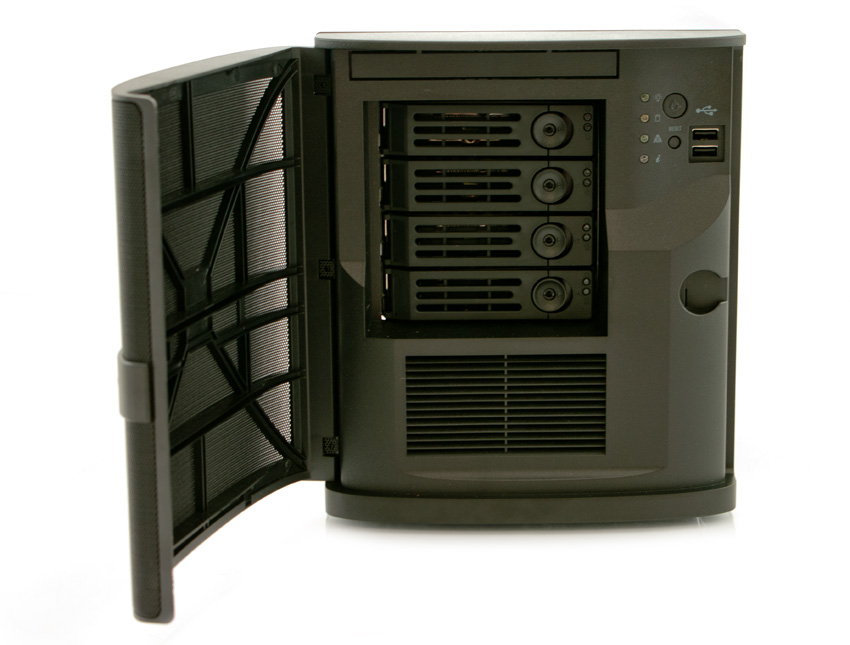 The bays themselves are screw-mounted and easily latch into place behind the protective lockable front bezel. The front of the chassis also features the power and reset buttons and two USB 2.0 ports, which are useful during the initial setup and subsequent direct file transfers. 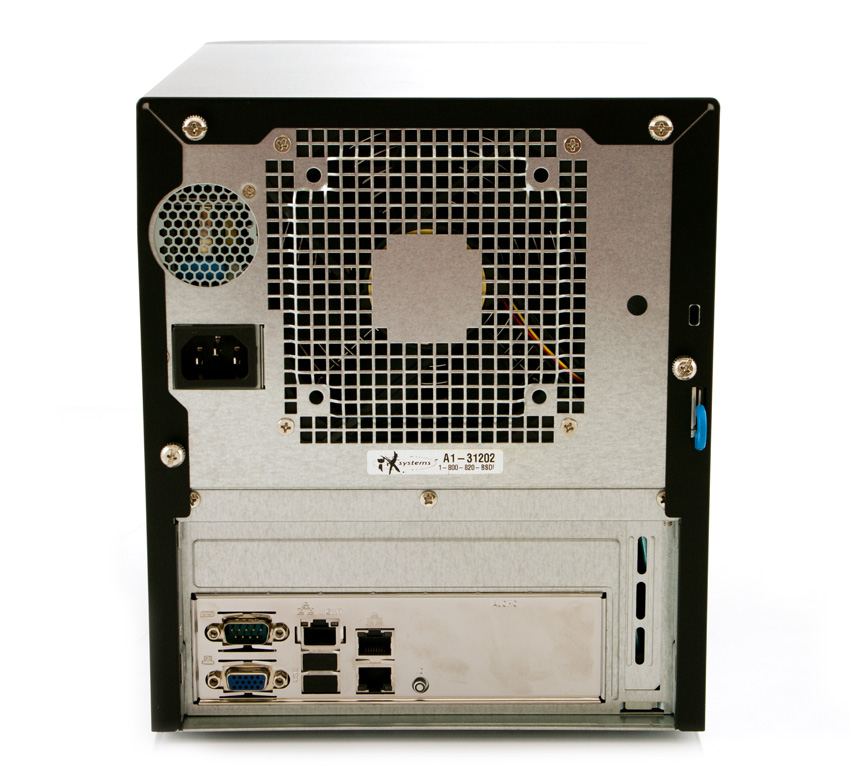 The rear has two more USB 2.0 ports, the AC adaptor port, a lock eyelet, and a serial port (DB9). 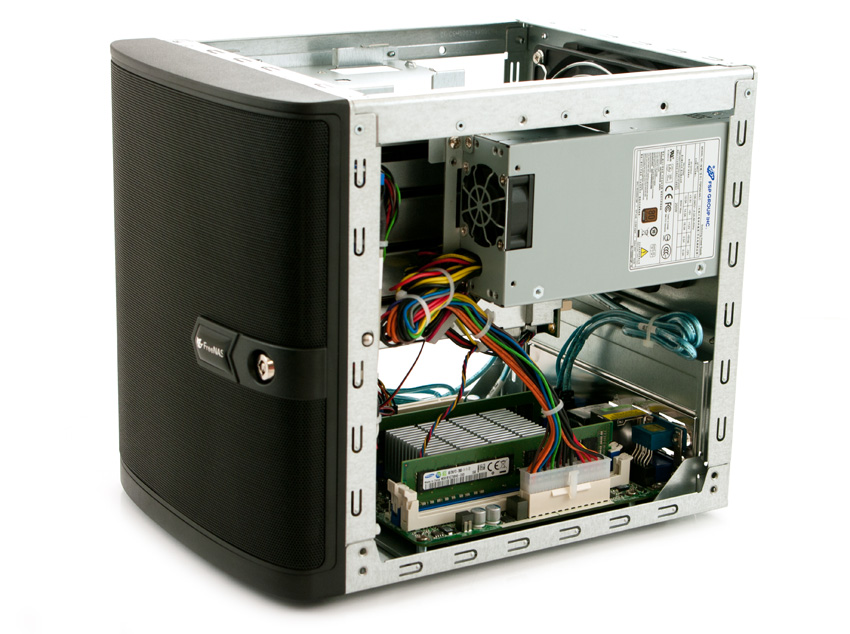 The initial setup of the iXsystems FreeNAS Mini is somewhat difficult for FreeNAS neophytes, requiring the navigation of the FreeNAS interface. In terms of usability, it is less user-friendly than most devices designed for the SOHO market, we've been spoiled with simple GUIs from the likes of WD, Synology and QNAP. Something that's unique in this space is that iXsystems offers a consultation service with every Mini purchased. Mini buyers get to work with a tech to discuss the use of the Mini and the environment. From there the tech will help handle pre-deployment tuning or tweaks as needed.

Getting started the user must first acquire the IP address to which the NAS is assigned (if a DHCP server is used), then separately access the appliance through a web browser (although FreeNAS does support Bounjour, allowing users to skip this step). 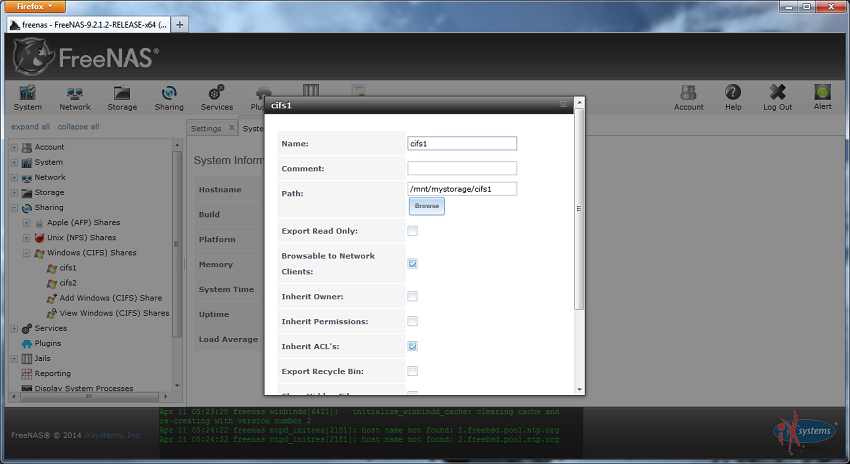 The user is then taken through an 8-step process, during which a generic user account is created with full access to all 16TB of storage space. For a user unfamiliar with the interface, this process could be somewhat confusing if the manual isn’t followed exactly. 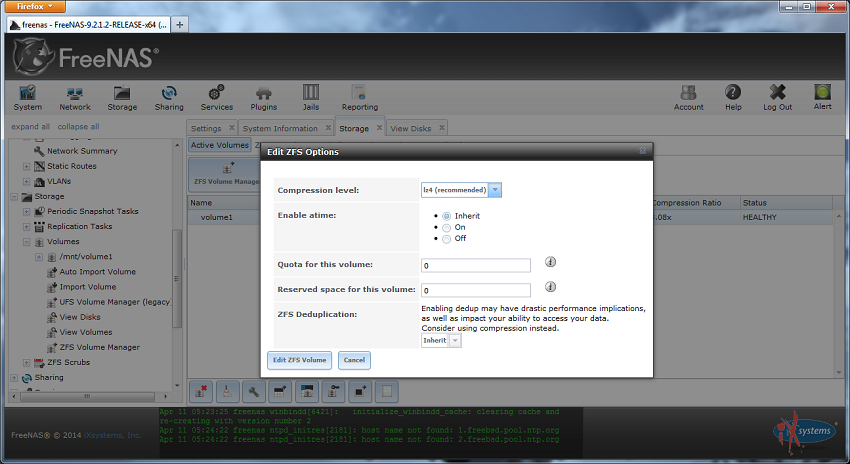 Once the user is acclimated to the interface, changes can be made regarding accessibility and configuration, and data can be accessed through a separate application (FreeNAS suggests FileZilla). 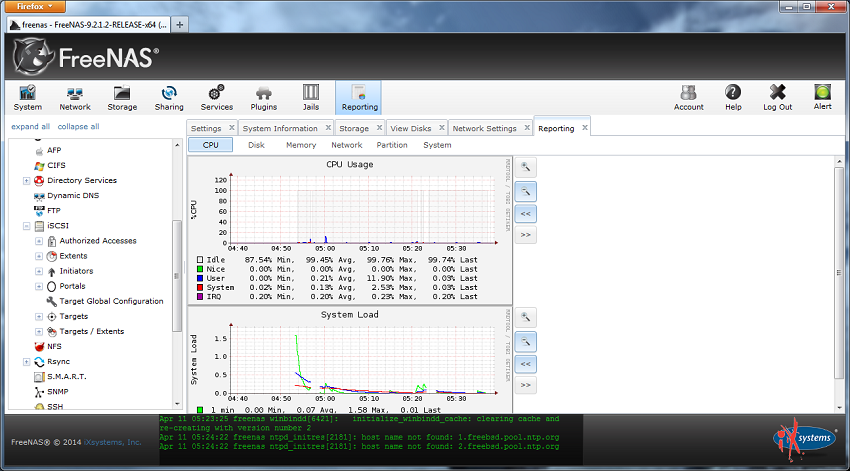 For those who want to tune their NAS or dig into the deepest layers of customization, FreeNAS offers all of that, along with scaling opportunities that aren't possible with most other NAS deployments. The scaling is of course less relevant with the Mini, but it's a core tenant of the FreeNAS value proposition and is worth noting. For storage admins that have FreeNAS in a work environment, the Mini offers a small-scale opportunity to test or validate settings and customizations or could be deployed in small/branch offices with replication to the main storage array. Of course the Mini is equally content to be the core of any home media library or could be used as core storage for small workgroups. 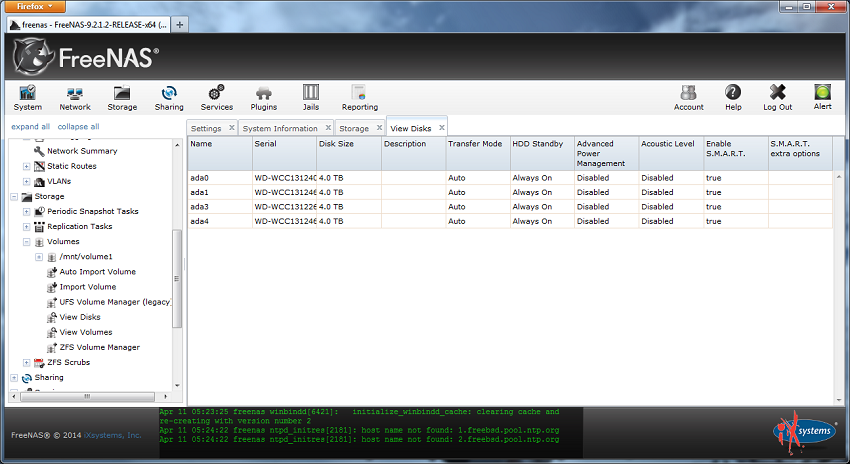 For the iXsystems FreeNAS Mini we tested both CIFS AND iSCSI protocols with four WD Se HDDs.

Our analysis of the iXsystems Mini NAS includes three profiles comparable to our past enterprise storage benchmarks and widely-published values such as max 4k read and write speed and 8k 70/30, which are also commonly used in manufacturer specifications and benchmarks.

The drives were configured in RAIDZ2 and the Mini in default block size, which is 128kb. This value will both enhance and detract from the system's performance in these benchmarks. Of course FreeNAS can be tuned to each specific workload, but our testing methodology doesn't allow for tuning for each specific test in a NAS of this class. With larger scale FreeNAS systems and more robust application testing, some degree of tuning would be acceptable and may occur in future reviews. In SOHO use cases less weight should be placed on smaller block size testing, we include the values in NAS reviews however to show a complete picture of performance which includes a worst-case scenario.

The first in our series of benchmarks measures 4K performance at 100% read 100% write activity. The top performer in both read and write functions was the CIFS configuration, with 214 IOPS and 139 IOPS, respectively.

In the main average latency test the CIFS configuration outpaced iSCSI in both read and write functions, with 1194 ms and 1838 ms, respectively.

Our next benchmark measures 100% 8K sequential throughput with a 16T/16Q load in 100% read and 100% write operations. Both configurations performed similarly in both read and write functions, but iSCSI performed better in both (2831 IOPS and 14438 IOPS, respectively).

Compared to the fixed 16 thread, 16 queue max workload we performed in the 100% 4k and 8k write tests, our mixed workload profiles scale the performance across a wide range of thread/queue combinations. In these tests, we span workload intensity from 2 threads and 2 queue up to 16 threads and 16 queue. In the 8K 70/30 test, the CIFS outperformed the iSCSI configuration (hovering around 193 IOPS vs. 140 IOPS, respectively), but the iSCSI configuration showed a much more consistent performance. 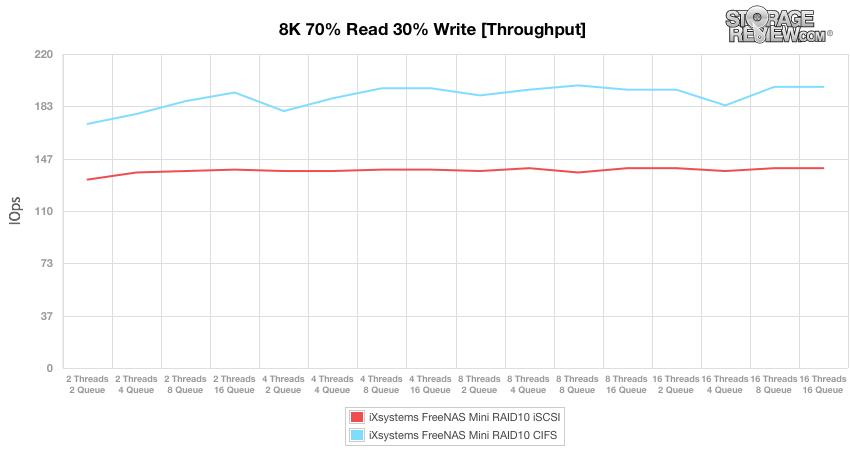 For the entirety of the average latency test, the CIFS configuration outpaced iSCSI, whose maximum peaks were 1287 ms and 1820 ms, respectively. 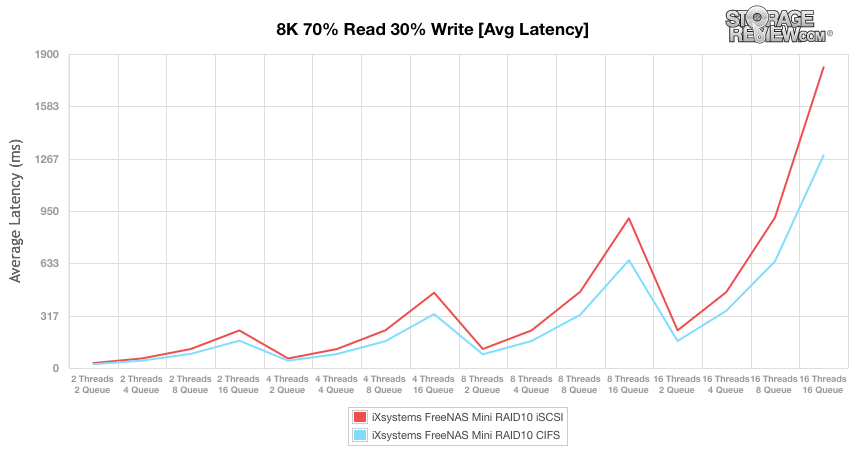 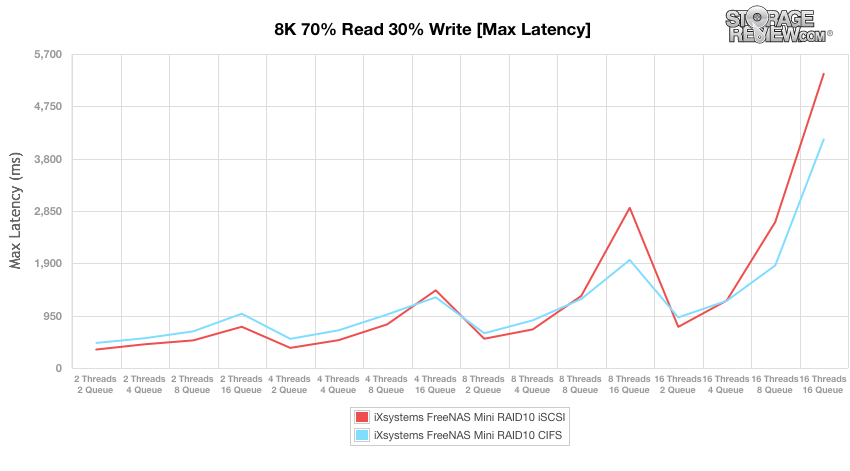 Similar to the max latency performance, the CIFS generally outpaced the iSCSI configuration in standard deviation. Although CIFS showed the highest peak of 625 ms (at the very end of the test), it generally maintained a faster performance. 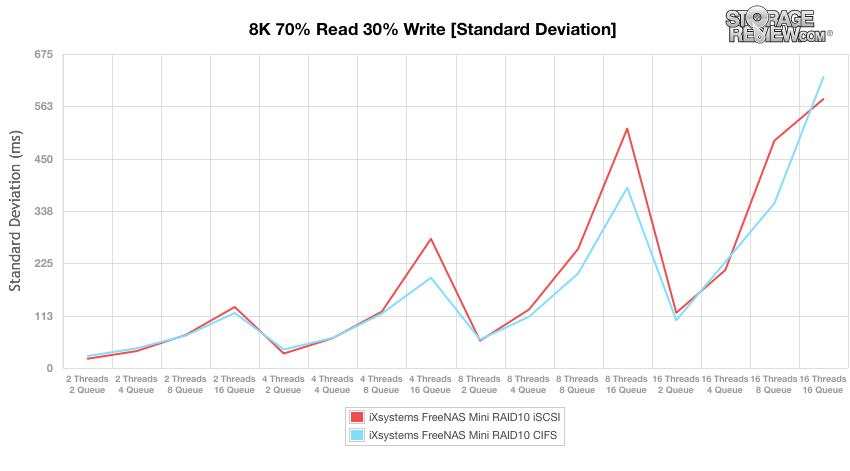 The last test in our Enterprise Synthetic Workload testing is the 128k test, which is a large block sequential test that shows the highest sequential transfer speed for a platter drive. In this final test the CIFS configuration outperformed iSCSI with 230,725 IOPS read and 203,412 IOPS write vs. 218,632 IOPS read and 174,586 IOPS write, respectively.

The iXsystems FreeNAS Mini has a lot to offer for a home or small office scenario. Its 16TB of storage and (up to) 32GB of RAM gives it competitive hardware specs and its data compression (and optional de-duplication) feature allows users to maximize the storage space and ZFS provides some of the best data integrity in a NAS. However, the FreeNAS interface is not optimized for ease of use. The installation of the console as well as navigation of its interface would require either previous knowledge of the FreeNAS OS or time to overcome its learning curve. Despite this limitation, once the user has learned the layout of FreeNAS they will be rewarded with a suite of features including effective fileserver backups (via the snapshot function), easy encryption and monitoring of file access, and a plethora of third-party plugins as well as a huge FreeNAS support community. The console itself is larger than comparable NAS consoles due to the inclusion of some extra internal space, but this allows for future hardware upgrades making the box itself quite flexible.

The 4K throughput performance of the FreeNAS Mini was not as competitive as other NAS consoles in its class. However, it was not optimized for the workloads we tested but could be tweaked to perform much better. iXsystems preferred that we tune for each benchmark, which simply isn't part of the testing methodology for devices in this class. The Mini should then be most evaluated on the 128K profile then, where it does quite well and posts impressive parity between iSCSI and CIFS.

The Mini is recommended for those wishing to make use of the flexibility and features available with FreeNAS, but potential buyers should be wary of some of the usability issues that come along with that.