The Kingston MobileLite Wireless is the company’s latest portable wireless storage device that ships without embedded storage and instead enables users to use memory cards (SD/SDHC/SDXC and microSD with included adapter) or USB flash drives to increase storage for tablets, phones and other mobile devices. MobileLite Wireless provides a battery life of up to 5 hours for playback and viewing files, and it conveniently charges over USB. The 5-hour life is 25% more than on the previous generation Wi-Drive portable wireless flash drive that Kingston continues to offer in 64GB and 128GB capacities. Uniquely, the MobileLite Wireless also offers the ability to serve as an emergency charger for mobile devices such as phones.

The Kingston MobileLite Wireless is the company’s latest portable wireless storage device that ships without embedded storage and instead enables users to use memory cards (SD/SDHC/SDXC and microSD with included adapter) or USB flash drives to increase storage for tablets, phones and other mobile devices. MobileLite Wireless provides a battery life of up to 5 hours for playback and viewing files, and it conveniently charges over USB. The 5-hour life is 25% more than on the previous generation Wi-Drive portable wireless flash drive that Kingston continues to offer in 64GB and 128GB capacities. Uniquely, the MobileLite Wireless also offers the ability to serve as an emergency charger for mobile devices such as phones. 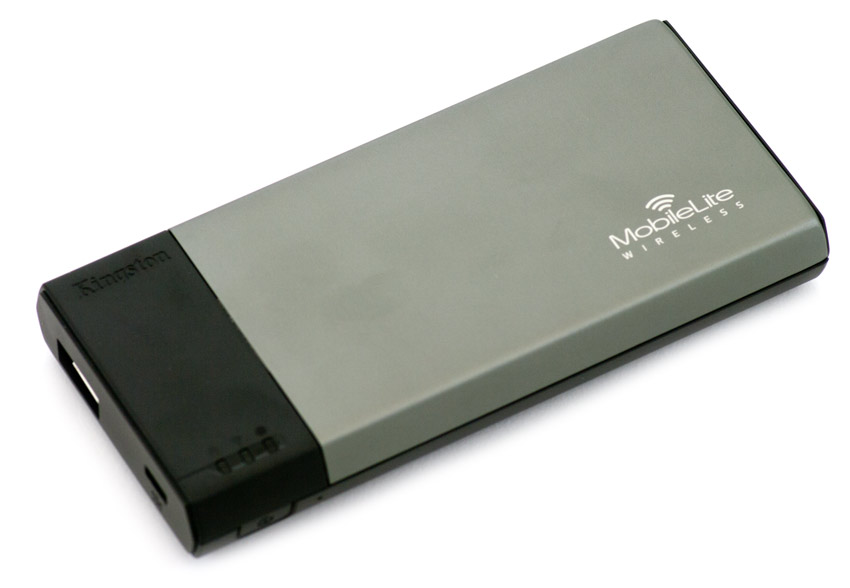 Limited mobile device storage capacities and expensive capacity steps have produced a growing market for alternative storage options. Already on the market, there are several generations of wireless portable hard drives and flash drives that typically have ranged from $100-$200 and offer robust capacity so that users can essentially take all of their content with them anywhere. These devices offer benefits including that large capacity as well as battery life from 5-10 hours, the ability to produce their own wireless networks and to pass-through connect to another network. Some can even be set up as a NAS. There are also card readers designed for mobile devices which are very inexpensive options, but they don’t feature solid support found with established brands and often cannot be shared across multiple devices and operating systems.

The Kingston MobileLite Wireless fits somewhere in the middle of those options. With it, users can expand storage in a smaller footprint and at a cheaper price point than wireless HDDs, and they gain a well-designed Kingston app and can use existing storage from both flash drives and compatible memory cards to provide flexibility. There are workflow gains for some, like photographers who may want to instantly see their shots on a larger tablet screen. There are also sharing benefits, for instance in the event that multiple users need access to the connected storage device all at once.

The Kingston MobileLite Wireless is shipping now with an MSRP of $69.99, which includes a one-year warranty. 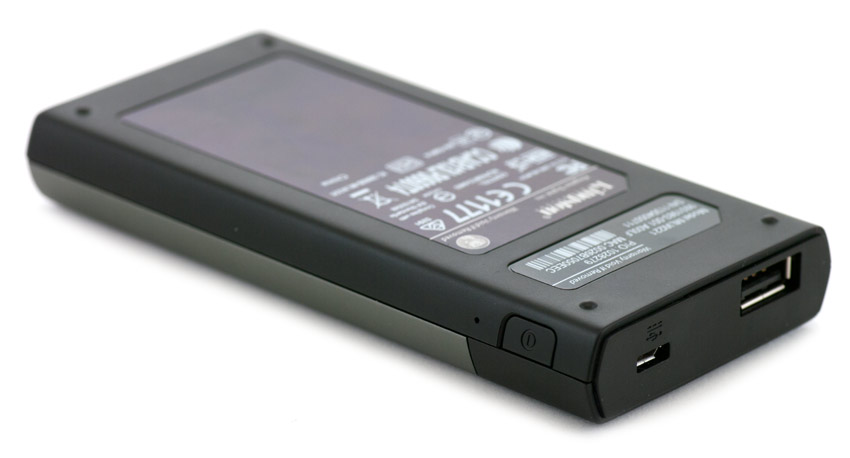 The right side of the unit features the SD card slot which requires a specific alignment for insertion. At times when inserting an SD card, we had to push two or three times to get the card to click into place. The left side has a USB port for storage and another port to plug in the included USB cord for charging and content transport. The bottom of the MobileLite Wireless shows product information on two stickers. 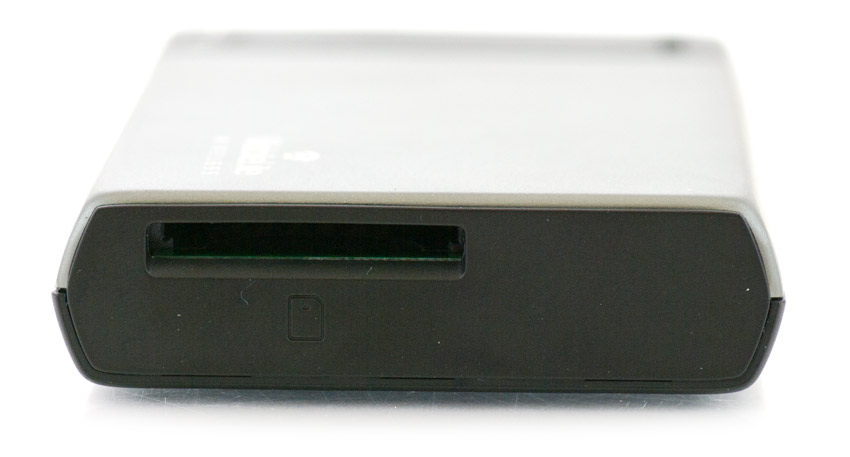 The MobileLite Wireless has a fairly compact design. The unit is a bit taller than an iPhone at 16.65mm (about 2/3 of an inch), and is just slightly longer than an iPhone. Adding to that, the device is super light-weight at less than 100g (around 3.5 ounces). As the device only uses a USB cable to connect and lightweight media for content, the MobileLite Wireless is pocketable and easy to take from place to place.

The app can be downloaded for both Android and iOS devices (we used an iPad for testing) and has a smooth interface that users will find intuitive. From the outset, SD cards and flash drives appear and users can select one from which they want to access content. From there, all of the data is divided into four categories: files, photos, videos and music. Users can select to view files such as photos by thumbnail, list or watch a slideshow. Playing media also works simply with users doing so by performing essentially the same functions natively found on their device. Icons at the bottom of the screen also enable sharing to the camera roll for photos, moving files to the user device or deleting files. 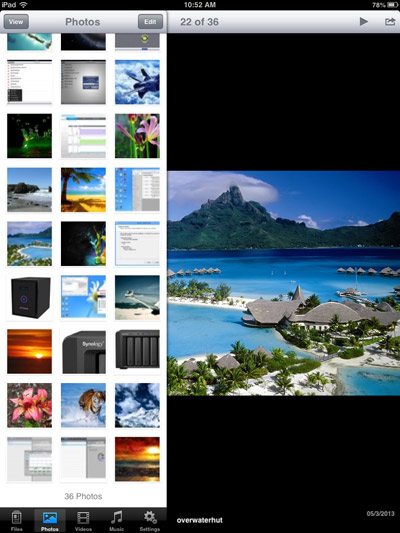 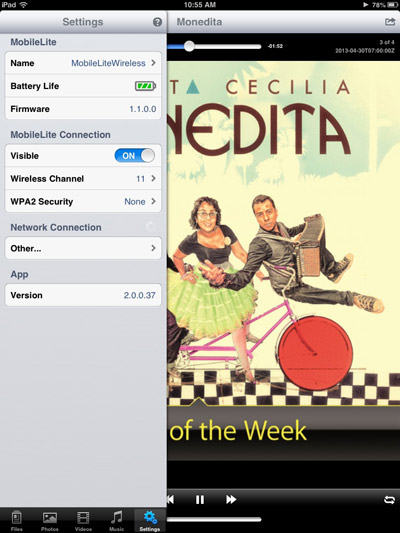 There is also a setting button at the bottom of the screen. Clicking this icon displays the device’s name, its battery life and firmware version as well as all of the MobileLite’s connection status. Users can password protect the network using WPA2 security which is helpful in public settings like a coffee shop, and they can select a network through which they want to connect on top of their connection to their MobileLite Wireless.

Another interesting, handy feature of the MobileLite Wireless is the battery bank feature that enables users to charge a mobile device using the mobile device’s USB cable for emergency charging. As one could expect, this cannot be done with wireless storage mode active and it does reduce the overall battery life for playback and viewing files. However, the feature is yet another that adds value to the device. To start charging, users connect their device to MobileLite Wireless and then press the power button for one second. (This startup and the three second startup are so that users won’t accidentally turn the device on or off.) The battery LED flashes red rapidly, but that just means the device is charging. This isn’t an alternative to using a mobile device’s native power adapter, but it will get the device more than enough juice to make a few important phones call in a jam.

The MobileLite Wireless also enables users to stream content from their iOS or Android device to up to three users. Wireless HDD devices offer more concurrent users, but at double the price (though storage inclusive). The feature worked well in testing. The device is also rated at a 5-hour life using its 3.7v 1800mAh battery. This is fairly solid, but again, the wireless HDDs such as the Seagate Wireless Plus or the Corsair Voyager Air offer 2-5 hours more.

The Kingston MobileLite Wireless is a reader and media streamer for USB flash drives and SD cards that enables users to optimize storage for their individual capacity needs to expand the functionality of their mobile devices. This makes it simple and cost-effective to utilize existing storage. The device also creates its own wireless network to which users can connect. Up to three users can access content at the same time, and users can turn on WPA2 security to prevent unauthorized access. Users can also pass-through the MobileLite network to access the Internet. The MobileLite Wireless features a 3.7v 1800mAh battery for up to five hours of battery life, and it also offers a battery bank mode to provide an emergency charge to mobile devices.

The Kingston MobileLite Wireless provides a valuable option in the mobile device capacity-expansion market. The price-point is less than half of what wireless drives cost, and though it provides no storage and slightly less battery life, the MobileLite Wireless is really flexible allowing users to use existing storage and to select exactly how much storage they want to add. This means that users can utilize an existing 32GB memory card or 128GB flash drive to immediately expand their device’s capacity. Also, users who want to easily move photos from a camera can do using an SD, SDHC, SDXC or even microSD card (via adapter). The free app available for iOS and Android devices is intuitive with functionality that isn’t shallow and doesn’t go overboard. While the device doesn’t offer everything wireless HDDs provide, it fills the market well at a lower price-point and with more than enough functionality to warrant a purchase.

The Kingston MobileLite Wireless provides a solid value for those looking to expand their device’s native capacity with a slew of USB drives or SD cards probably already in use.