The Kingston SSDNow mS200 is an mSATA SSD that is built specifically for system builders, OEMs, and enthusiasts. Roughly eight times smaller than a 2.5” drive, the SSDNow mS200 claims sequential read/write speeds of 550MB/s and 530MB/s.  The device is fully compliant with mSATA interface, uses NAND based flash memory and supports Intel’s SRT, S.M.A.R.T., and TRIM. The mS200 comes in 30GB, 60GB, 120GB, 240GB, and 480GB capacities.

The Kingston SSDNow mS200 is an mSATA SSD that is built specifically for system builders, OEMs, and enthusiasts. Roughly eight times smaller than a 2.5” drive, the SSDNow mS200 claims sequential read/write speeds of 550MB/s and 530MB/s.  The device is fully compliant with mSATA interface, uses NAND based flash memory and supports Intel’s SRT, S.M.A.R.T., and TRIM. The mS200 comes in 30GB, 60GB, 120GB, 240GB, and 480GB capacities. 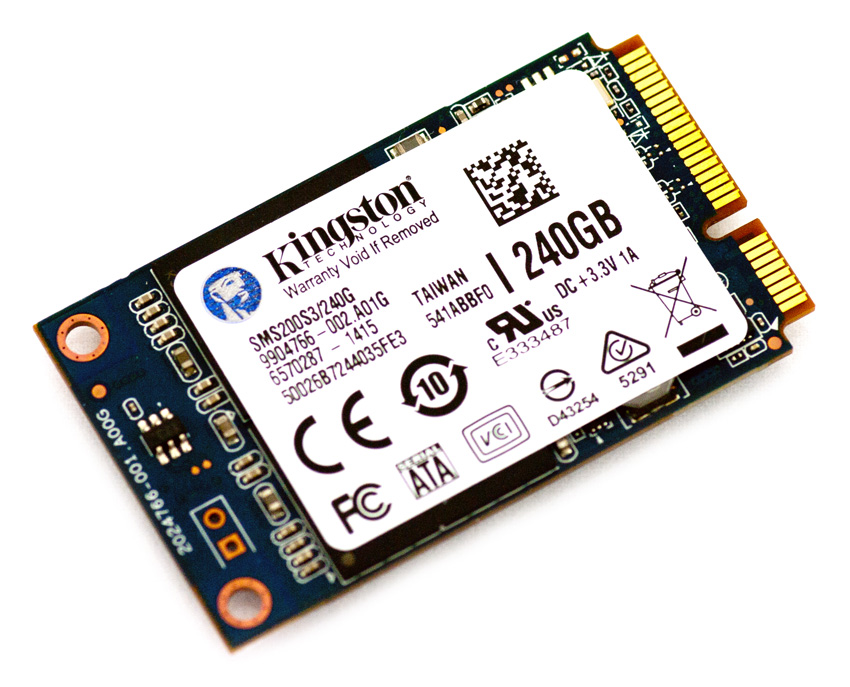 The Kingston SSDNow mS200 mSATA is basically a barebones SSD aimed at OEMs and users who want to update their ultra thin notebook or tablets. It features a high performance for a low price point. It also comes with a relatively high endurance spec. For example, the 240GB we’ll be testing has a projected TBW of 585TB.

The Kingston SSDNow mS200 mSATA  is about 40 percent smaller and 12 times lighter than the standard HDD or in other words about 1/3 the size of a standard business card. 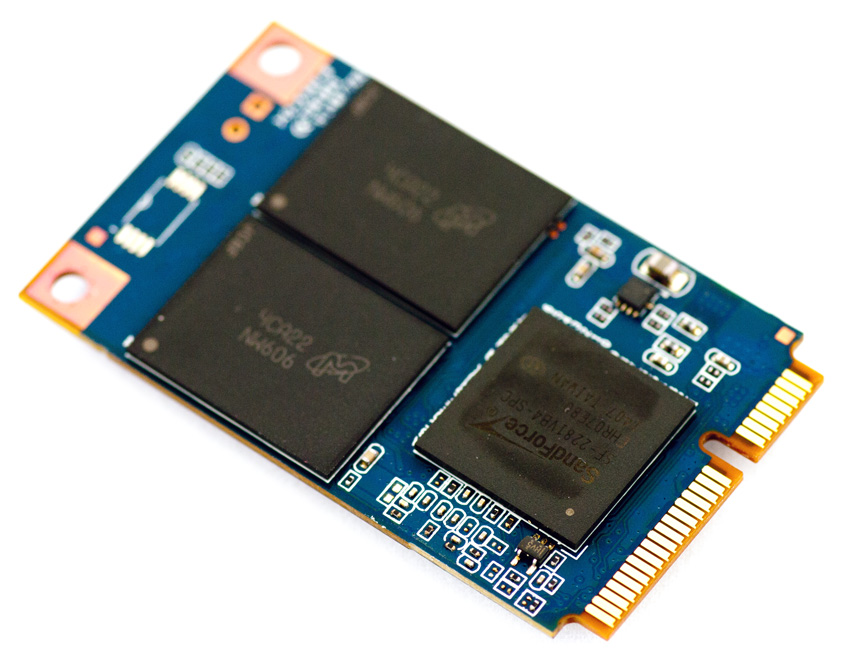 On the device itself is a large sticker that covers the components. The sticker has part number, serial number, and storage size. Flipping the device over reveals two NAND packages and the LSI SandForce 2281 controller.

For our test we will be using the 240GB version of the Kingston mS200, testing both random and repeating data.

Expanding our 4k test, we look at write latency of each SSD. Max latency is also important, although that number can change as the NAND experiences wear over time. The Kingston mS200 random eeked out the lowest average latency at 0.0496ms while the Micron RealSSD had the lowest max latency at 1.454ms. 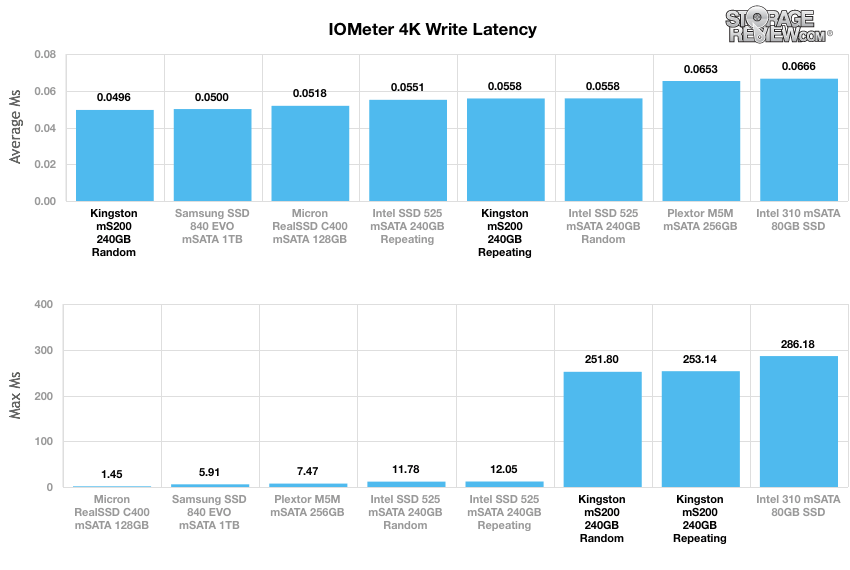 In our next test, we shift to a smaller 4k random workload with 100% read activity that scales from 1QD to 64QD. In this setting, the Kingston mS200 repeating ran near the bottom of the pack, the overall leader was the 840 EVO. 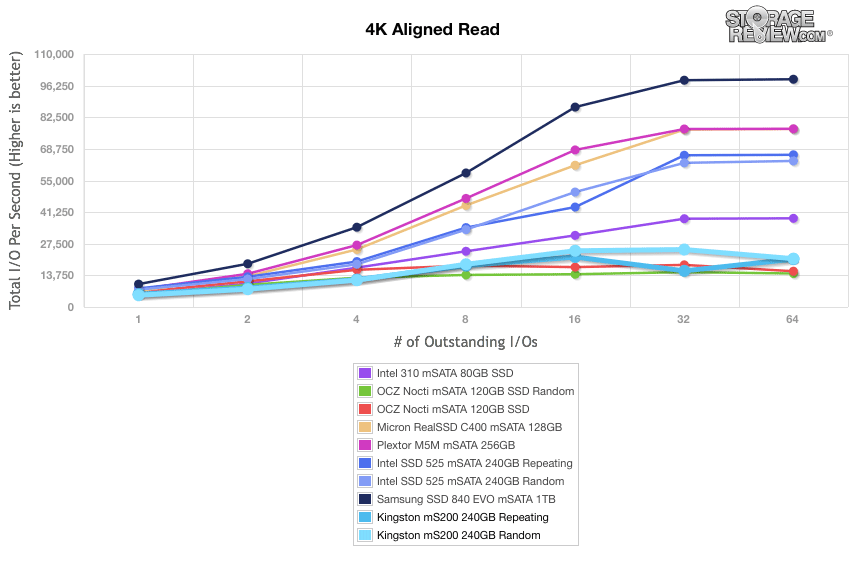 Shifting focus to write activity, the Kingston mS200 repeating ran near the top but the overall leader was again the 840 EVO. 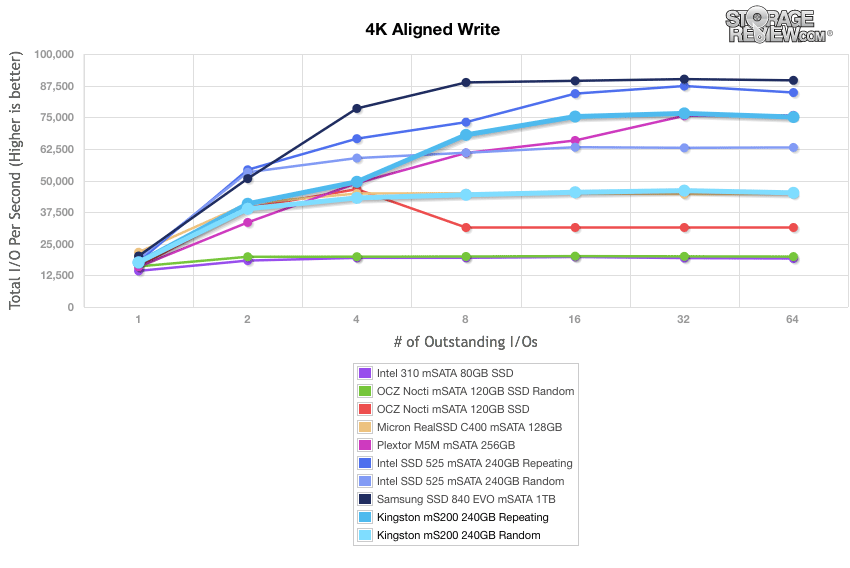 The first is our database profile; with a 67% read and 33% write workload mix primarily centered on 8K transfer sizes. In the test, both Kingstons ran near the middle to bottom of the pack while the 840 EVO and Intel 525 repeating battled it out for the top spot. 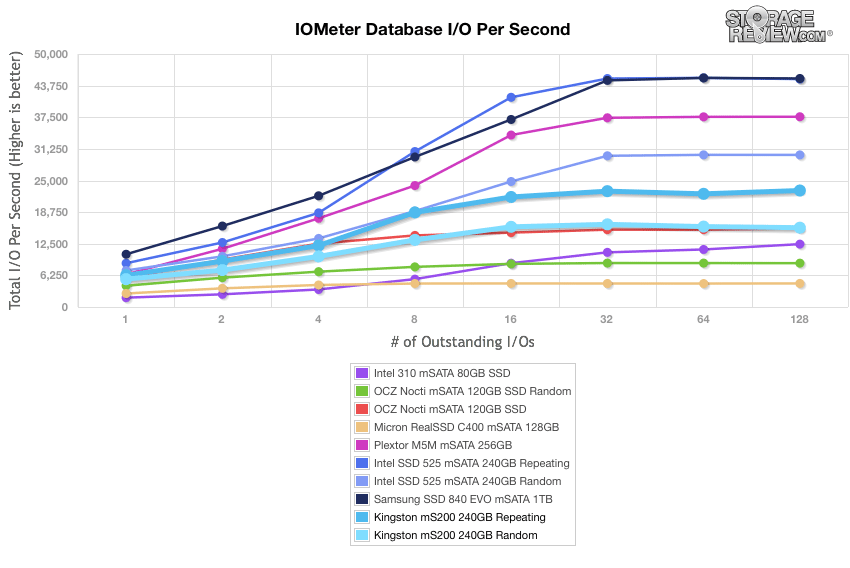 Our web server profile is read-only with a spread of transfer sizes from 512-byte to 512KB. Again the Kingston mS200s hung around the bottom hovering around the 10,000IOPS mark in later queue depths. While the 840 EVO crushed the other drives. 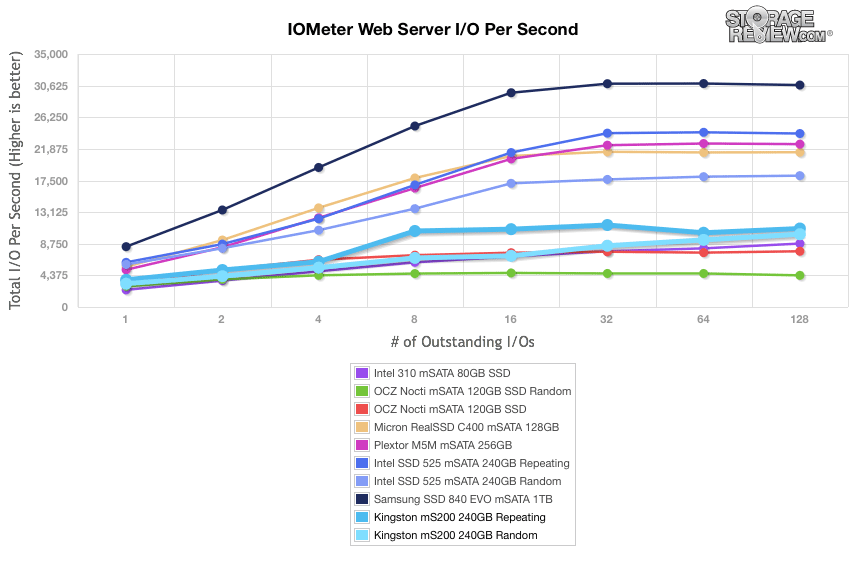 The next profile looks at a file server, with 80% read and 20% write workload spread out over multiple transfer sizes ranging from 512-byte to 64KB. The Kingston mS200 was about the same as the previous test. Again the 840 EVO and the Intel 525 repeating were duking it out for the top spot. 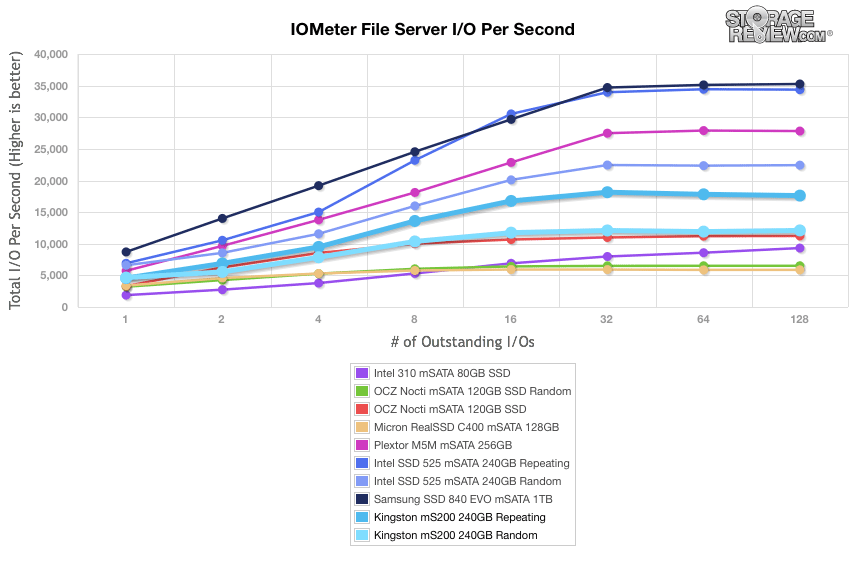 The last profile looks at workstation activity, with a 20% write and 80% read mixture using 8K transfers. While the Kingston mS200s were higher in this test they maintained their spot within the rest of the pack. And again the 840 EVO stood out on top. 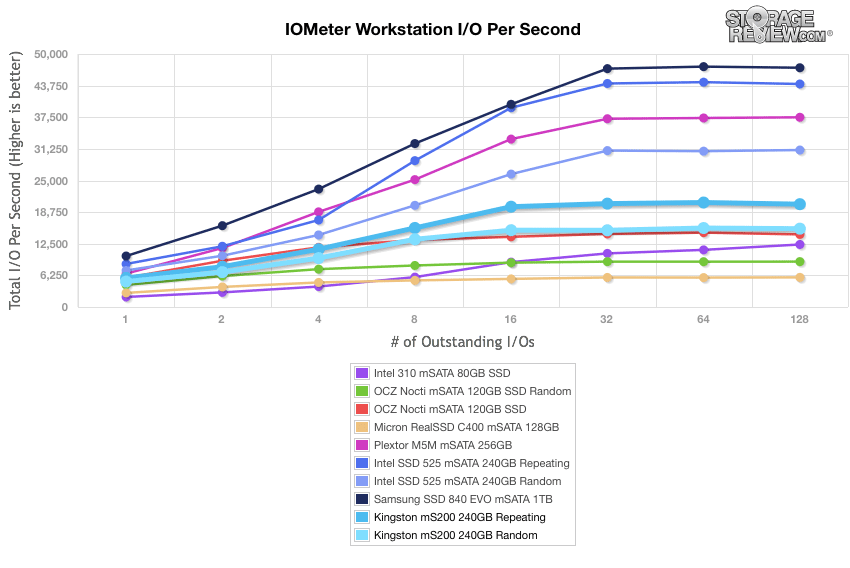 The first real-life test is our HTPC scenario. In this test we include: playing one 720P HD movie in Media Player Classic, one 480P SD movie playing in VLC, three movies downloading simultaneously through iTunes, and one 1080i HDTV stream being recorded through Windows Media Center over a 15-minute period. Higher IOps and MB/s rates with lower latency times are preferred. In this trace we recorded 2,986MB being written to the drive and 1,924MB being read. 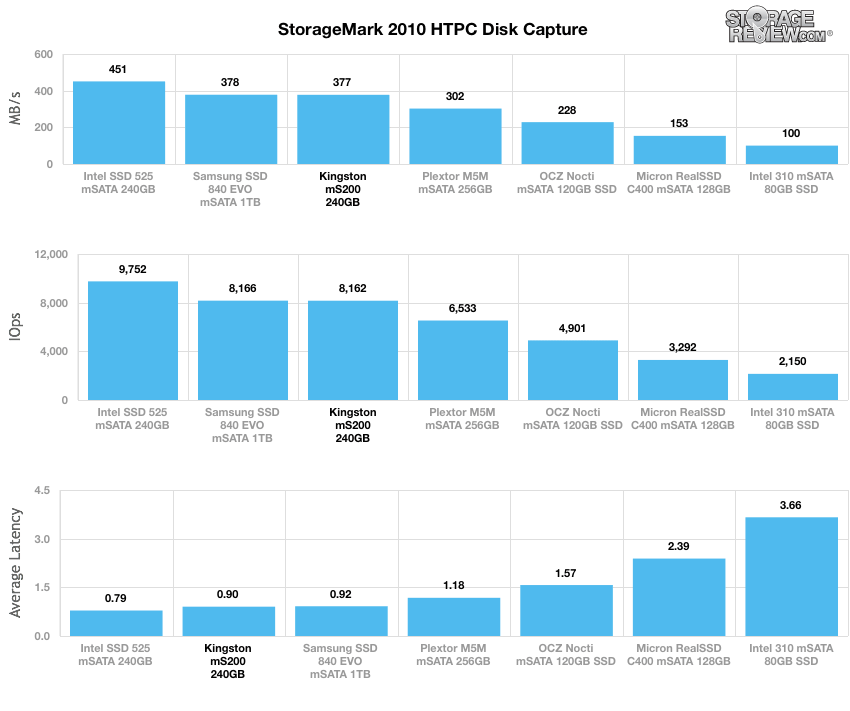 Though the Kingston mS200 didn’t come out on top it did run neck and neck with the 840 EVO that had been coming out on top on several of the previous tests. 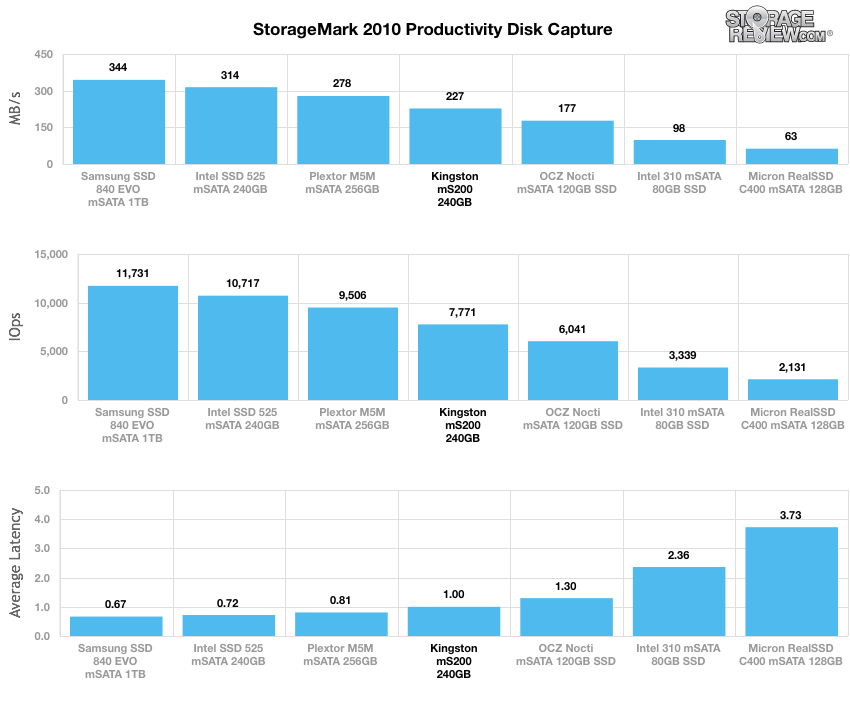 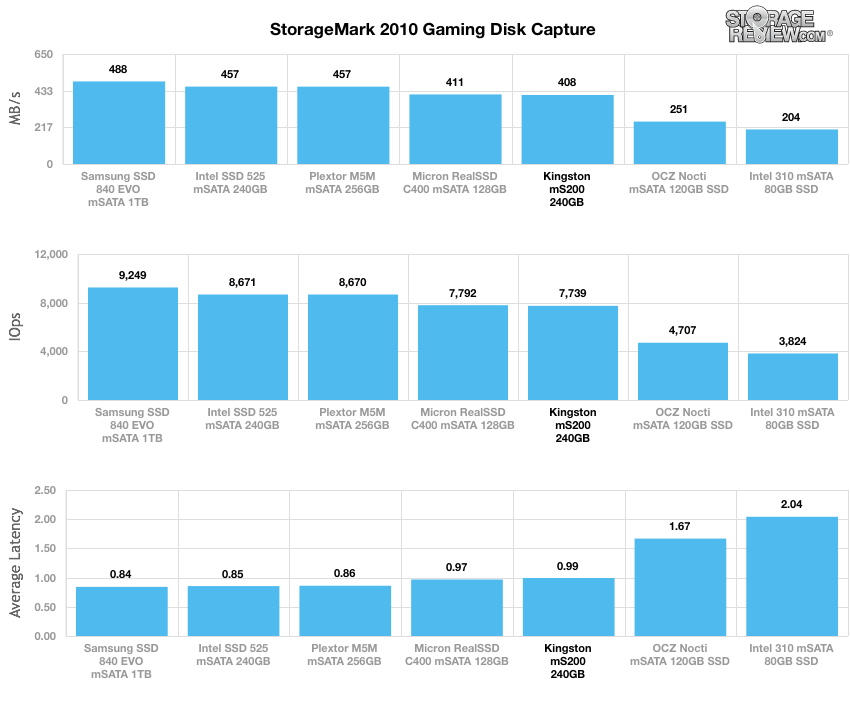 The Kingston SSDNow mS200 is an mSATA SSD with OEMs and enthusiasts in mind. It comes in multiple capacities from 30GB up to 480GB, uses Toshiba MLC NAND and SandForce controller. The mS200 comes with a 3-year warranty (2-year for the 30GB).

From a performance perspective, the Kingston mS200 had a few strong showings throughout. It even ran pretty well with the 840 EVO, which was one of the top performers in the consumer real-world benchmark tests. The mS200 didn’t achieve its claimed sequential read/write speeds of 550MB/s and 530MB/s; it hit a 326MB/s read and 196MB/s write in our 2MB sequential test. The Kingston mS200 random did come out on top with the 4K write performance and it had the lowest average write latency, but it slumped behind in 4K read performance. Overall the main competing factor for the Kingston SSDNow mS200 is its low price, coming in with street prices below the Intel SSD 525 and Samsung EVO mSATA.

The Kingston SSDNow mS200 is an mSATA SSD that posts good performance, new higher capacities and aggressive price points making for a good upgrade choice for budget-centric buyers who want more out of their mSATA port.