The Komputerbay 64 GB Compact Flash Memory Card ships in 64GB and 128GB capacities and is specifically designed for devices such as digital cameras targeting the critical performance speed requirements of professional photographers, digital camcorders, and other devices enabled with Compact Flash. Komputerbay specs the card with impressive top-in-class speeds at 110 MB/s write and 150MB/s read.

The Komputerbay 64 GB Compact Flash Memory Card ships in 64GB and 128GB capacities and is specifically designed for devices such as digital cameras targeting the critical performance speed requirements of professional photographers, digital camcorders, and other devices enabled with Compact Flash. Komputerbay specs the card with impressive top-in-class speeds at 110 MB/s write and 150MB/s read. 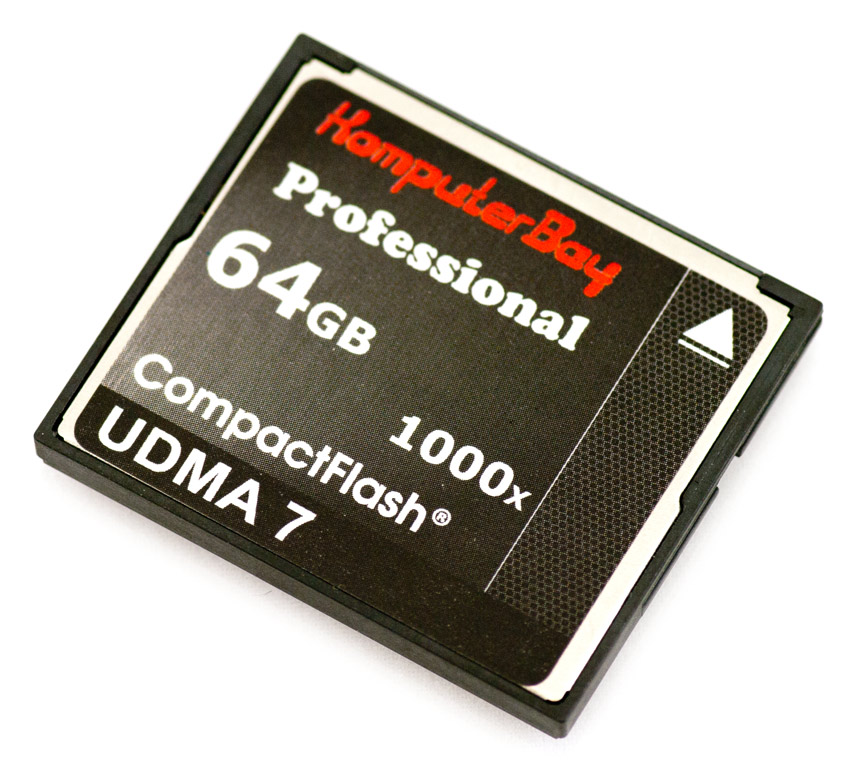 Compact Flash cards still remain a popular option for many high-end consumer devices as well, so it is important to have good performance with good value. While consumers may already have something that seems to function all right for the most part, Komputerbay claims that their 1000x 64GB professional compact flash card (which uses Extreme Speed UDMA 7 RAW) can be a significant improvement over the CF card consumers are presently using making whatever it is that needs to be done with greater efficiency.

The Komputerbay Compact Flash Memory Card is available at a street price of $134.99 for the 64GB, and $179.99 for the 128GB model. That price is inclusive of a life-time warranty. Our review card is the 64GB capacity.

The Komputerbay Series card features a design in line with its other memory card products; a black casing with its logo and simple design located on a sticker. The card also features speed class information.

On the side at the top, you can see the 50-pin connector. There is no additional card information on the back accept for the Komputerbay logo and a section where users can label the card for its specific use.

In this review we include the following comparables from our database of memory card reviews:

Using our Consumer Testing Platform, we measured transfer speeds from the Komputerbay CF 1000x 64GB with IOMeter. Sequential read speeds measured 121.3MB/s, while write activity hit 101.6MB/s. These results were significantly higher, as expected, when compared to the 600x class cards, as the SanDisk Extreme Pro 64GB only hit speeds of 56.6MB/s read and 88.6MB/s write. As a matter of scale, the SanDisk’s 600x 32GB offering posted read and write speeds of 57.9MB/s and 68.2MB/s respectively.

Switching to random large-block transfers, we measured 124.2MB/s read and 52.8MB/s write for the Komputerbay card, while the SanDisk Extreme Pro 64GB 600x boasted speeds of 52.7MB/s read and 3.6MB/s write. The SanDisk 32GB model had similar results, with read and write speeds of 53.5MB/s and 3.9MB/s respectively.

Again, the Komputerbay Compact Flash Memory Card outperformed its competition, easily topping the 600x SanDisk cards by a large margin. As we expected, these benchmarks demonstrate how much faster the 1000x class is, though our depth of comparable cards is clearly lacking.

Its consistent read speeds above 120MB/s should be enough to keep up with raw video or fast sequential rapid-fire modes from many types of professional cameras.

The KomputerBay CF Professional 1000x 64GB Memory Card is a consumer flash card in the mainstream category that Komputerbay quotes minimum performance figures of 150MB/s for sequential reads and 110MB/s for sequential writes. The Extreme Speed UDMA 7 RAW rating indicates that the card is capable of reading and writing HD video and high-resolution images during fast rapid-fire modes. The KomputerBay CF Professional 1000x cards are offered in 64GB and 128GB capacities with a very competitive price point. The 64GB capacity that we’ve reviewed is available with a street price of roughly $134.99, which is significantly cheaper than the Lexar Pro 1000x and slightly less than the Transcend Ultimate 1000x.

In terms of tested performance, the Komputerbay CF Professional 1000x 64GB posted results below the quoted figures of 150MB/s read and 110MB/s write; more so for the former. In our testbed, the memory card came in right around 121.3MB/s for sequential reads and 101.6MB/s for sequential writes, though these speeds are still right up there with its competition and are also much faster than the 600x class cards which is great for those who need the improved throughput.

If you are looking for top-notch write speeds for a reasonable price in a CF form factor, the KomputerBay 64GB 1000x card is a great option.