LaCie and beautiful design intuitively go together, thanks to years of LaCie regularly pumping out great looking storage devices. The LaCie 2big 2-bay NAS system is no different, sporting solid-aluminum body. It features LaCie’s NAS OS 3.0, which makes NAS management easy. Out of the box, the 2big NAS comes configured in RAID 1, but has support for RAID 0 configurations.

LaCie and beautiful design intuitively go together, thanks to years of LaCie regularly pumping out great looking storage devices. The LaCie 2big 2-bay NAS system is no different, sporting solid-aluminum body. It features LaCie’s NAS OS 3.0, which makes NAS management easy. Out of the box, the 2big NAS comes configured in RAID 1, but has support for RAID 0 configurations.

LaCie ships the 2big units either bare or in a two disk setup with either 2TB or 3TB hard drive capacities. Beyond the networked storage capabilities, the 2big NAS supports a slew of backup and media serving features including Time Machine and Windows Backup. For IT managers and basic users alike, management is non-issue with the NAS OS 3.0 Dashboard. NAS OS 3.0 allows access to set up functions such as users, groups, shares and RAID configuration. The unit also supports wake on LAN and expansion or direct connection via one eSATA and USB 2.0 ports. 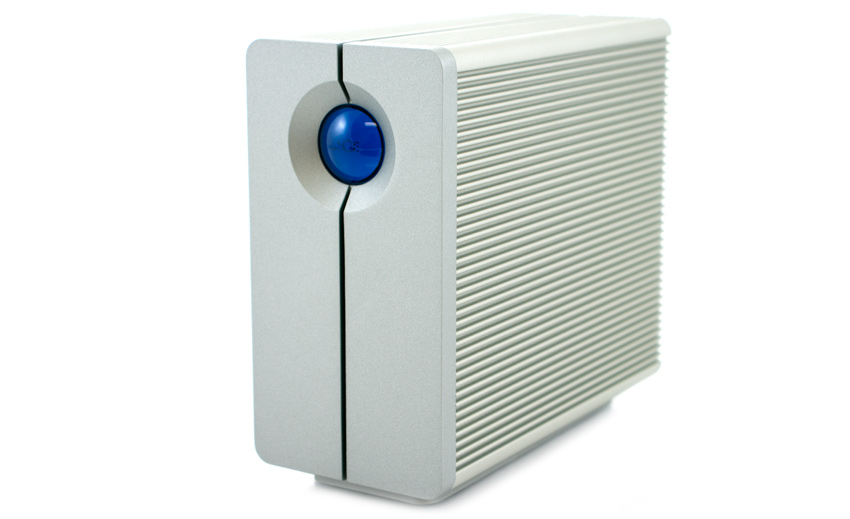 LaCie continues with its tradition of providing eloquently designed external storage devices. The 2big NAS is no exception with its solid-aluminum design by Neil Poulton. The aluminum design serves two purposes; eloquent visual effect and thermal heat dispensing. The aluminum casing provides 60% more surface area, which diverts and dissipates heat more efficiently. To help with cooling, LaCie uses a thermo-regulated fan, which turns on and off according to internal temperature. It cools the components while reducing electricity usage by not running as often as some other desktop hard drives. Through our review, the drive remained almost inaudible over sounds of the fans with the computer case. Under heavier use, you can begin to hear the fan kick in, but it’s hardly out of place. 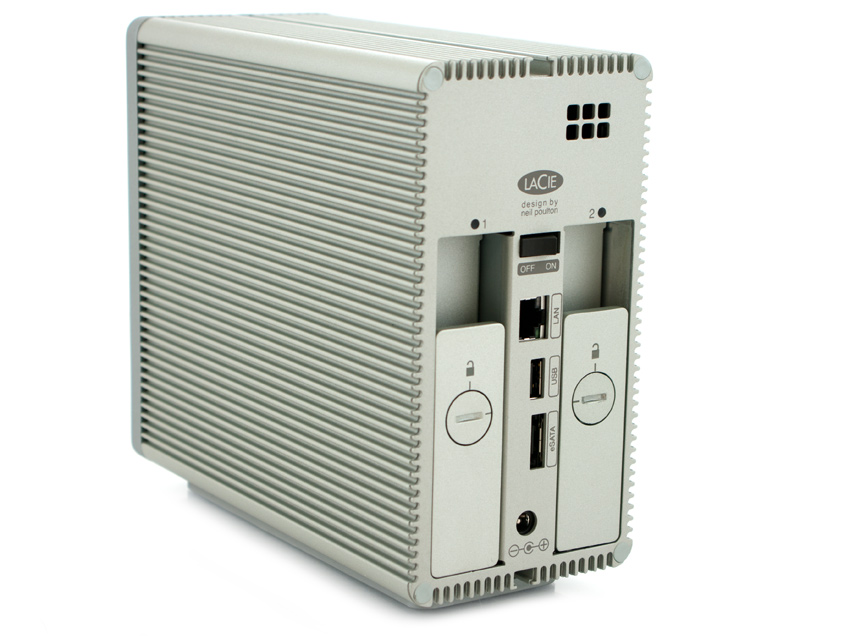 On the front of the device, you see a large iconic blue light, which blinks as the drives are initiated then remains steady during use. The 2big NAS takes around a minute to initialize after turning on before it is usable. On the back of the device, you see two hot swappable drive bays that are locked. LaCie provides a handle tool to unlock the drives but a simple coin can do the trick in a pinch. In addition, there is one Gigabit Ethernet 10/100/1000 Base-TX interface, along with an eSATA and USB 2.0 interface for additional storage, printer or media share features. 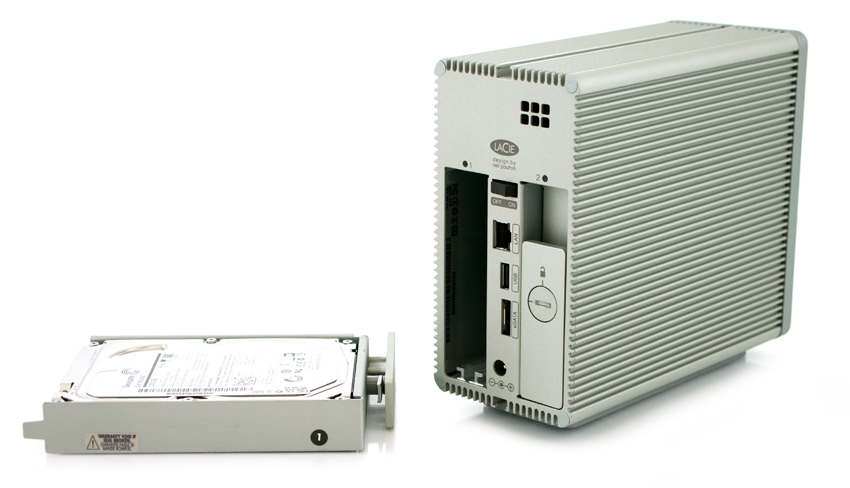 Inside our 2big NAS 6TB, LaCie is using two Seagate Barracuda 3TB drives (ST3000DM001) to provide 6TB of storage in either RAID 0 or RAID 1. In our review of the Seagate Barracuda 3TB, the drive is a SATA 6Gb/s interface and provided almost 200MB/s sequential transfer speeds, with very good performance in our HTPC benchmark.

The LaCie 2big NAS comes with a handy Network Assistant that provides general information and easy one click button to mount your NAS drive. Under the General tab, you can access the web-based Dashboard program to fully setup your LaCie 2big NAS or you can use the NAS IP address to access. 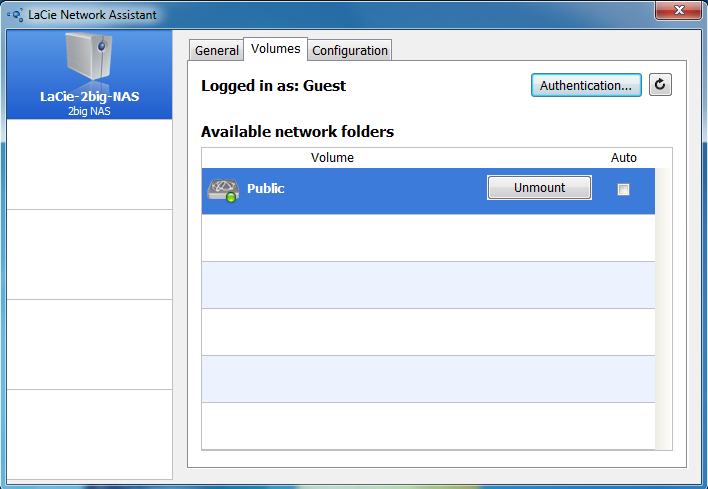 The first time you log onto the 2big NAS Dashboard, you’ll be prompted to set up a logon and password for future access. On the Dashboard, we have a wide range of choices to customize the device, ranging from Users setup, Eco Management to RAID Management. 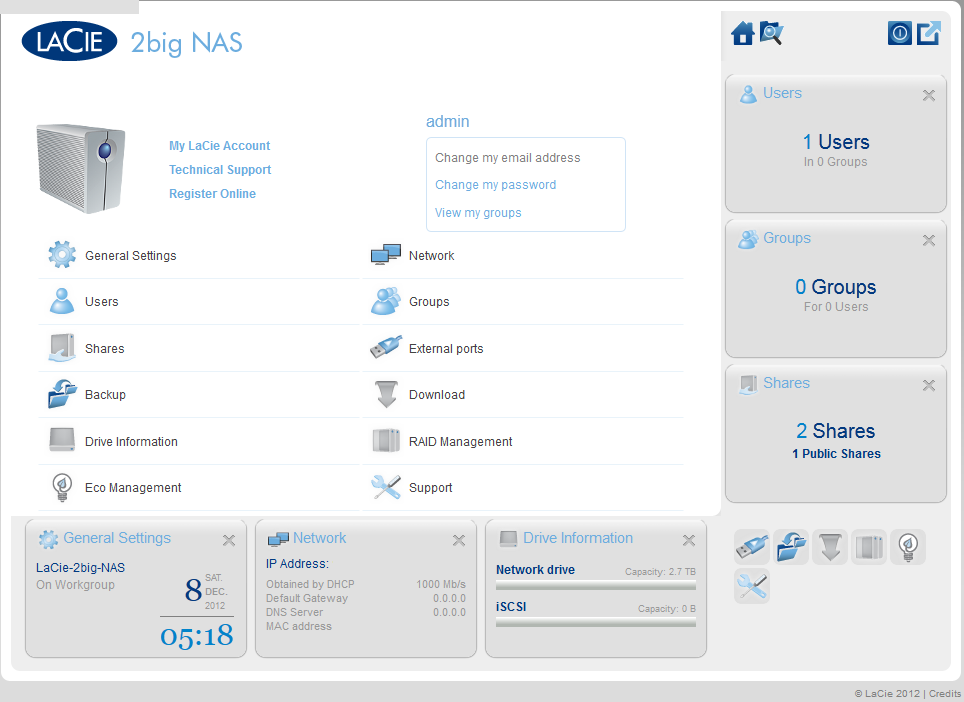 By default, the device is set up in a RAID 1 providing 2.72TB of free space on the drive while the second drive mirrors the first. This is an ideal setup for a network based drive to provide the added security for potential data loss or drive failure. If the main use case for the drive will be as a personal drive with an eye toward performance, users might want to setup the drive in RAID 0 for 6TB of storage and the performance increases due to the RAID 0 setup. 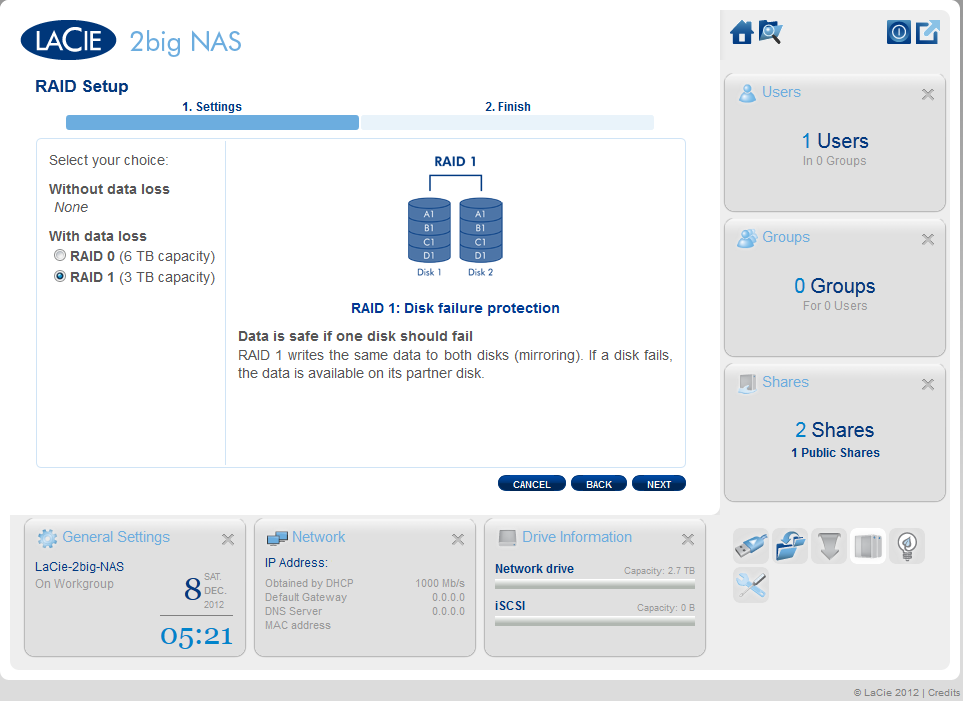 LaCie provided a nice feature on its 2big NAS with the Eco Management function. It provides users the ability to efficiently manage the drive’s power function. With Eco Management, you can set up how long the hard drive stays on after no activity and sleep mode. The Power schedule allows you set up when the drive will power on and power off over the full seven days, when deep sleep is enabled. If you leave it a default, the drive will remain active until the power button is turned off. According to LaCie, In Eco mode the device uses one-tenth the energy of the previous generation of LaCie NAS. 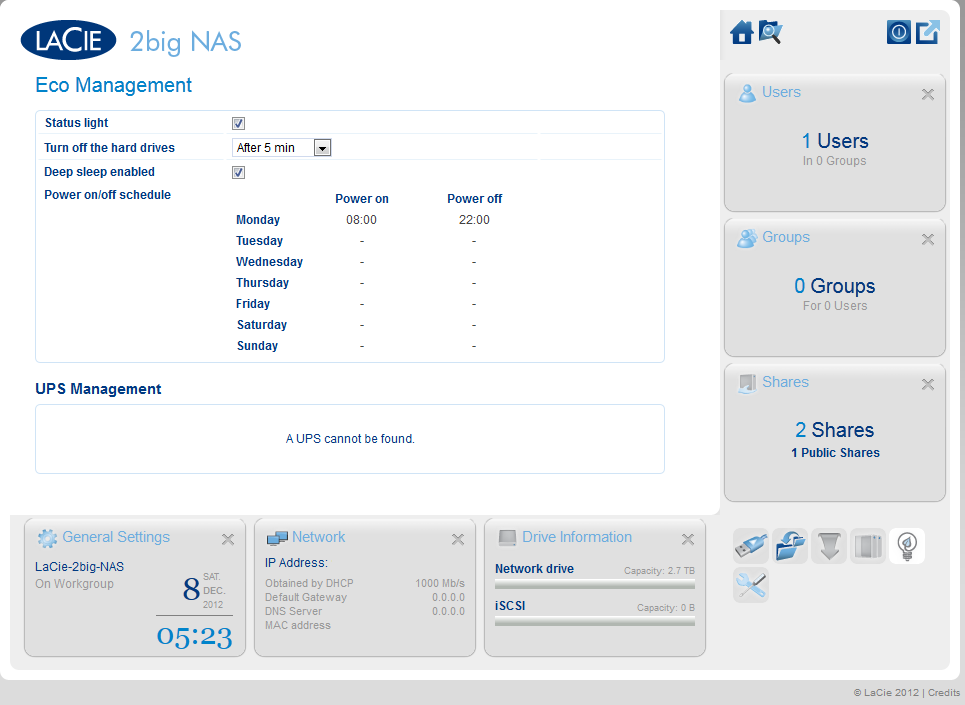 To measure performance of the LaCie 2big NAS 6TB, we connected it over our 1GbE network to our Consumer Testing Platform. Using IOMeter with a 500MB test file, we measured sequential transfer performance of 61.7MB/s read and 54.8MB/s write in the default RAID1 configuration. With 4K random transfers performance measured 192 IOPS read and 930 IOPS write.

LaCie continues on its tradition of superior design and simple to use NAS OS with the 2big NAS. Setup out of the box was easy; accessing the system directly over the NAS 0S 3.0 Dashboard. In that process, the administrator has the ability to configure RAID options, users, groups and power management. Performance was acceptable, as we measured sequential transfer performance of 61.7MB/s read and 54.8MB/s write. The 2big NAS matched its stated specifications on sequential write performance but fell a little short on read performance. However, the overall performance will meet the needs for a small-business environment with a limited number of active users at once.

With its Eco Management function, the 2big NAS takes the drive in the right direction for the "green" movement. With a stated one-tenth of energy usage over previous generations, 2big NAS helps you to reduce power consumption, something all IT managers work towards to drive down TCO.

LaCie has done a good job with the 2big NAS and its NAS OS 3.0. Configuration is simple to set up and with its Eco Management function; the 2big NAS is a good solution for small business or personal users looking to employ a NAS to their network interface.

Our last @qsan.official teaser before our review i