The 5big Office + is one of LaCie’s latest prosumer NAS devices, updated with a 1.6GHz Dual-core Intel 64-bit Atom processor and 2GB of RAM. LaCie has swapped its standard NAS OS found in other LaCie solutions for  Windows Storage Server 2008 R2 Essentials in the 5big Office + to better fit into Windows-based environments. This edition of Windows Server caps the number of concurrent users to 25, reflecting the SOHO market LaCie is targeting with its newest 5big system. But with features like five drive bays, 802.3AD link aggregation support, and a super-rugged aluminum chassis, the 5big Office + brings lots of enterprise-grade features to small offices.

The 5big Office + is one of LaCie’s latest prosumer NAS devices, updated with a 1.6GHz Dual-core Intel 64-bit Atom processor and 2GB of RAM. LaCie has swapped its standard NAS OS found in other LaCie solutions for Windows Storage Server 2008 R2 Essentials in the 5big Office + to better fit into Windows-based environments. This edition of Windows Server caps the number of concurrent users to 25, reflecting the SOHO market LaCie is targeting with its newest 5big system. But with features like five drive bays, 802.3AD link aggregation support, and a super-rugged aluminum chassis, the 5big Office + brings lots of enterprise-grade features to small offices.

The 5big Office + is a successor to the LaCie 5big Network 2, which we reviewed in September 2011. The key change between the two devices is that the 5big Office + includes Windows Storage Server 2008 R2 Essentials, which offers core Windows Server technologies in a package that can be administered entirely from a web browser. Previous 5big systems featured LaCie’s own NAS OS operating system, which is a capable platform but cannot match the Windows Server family for familiarity and integration with other manufacturers’ devices.

Our 10TB review model shipped with 5 Seagate Barracuda Green 2TB drives, which in our experience provide a good compromise between performance and power consumption. Depending on which RAID scheme users select when configuring the system, the actual amount of available storage space available will be less than 10TB. 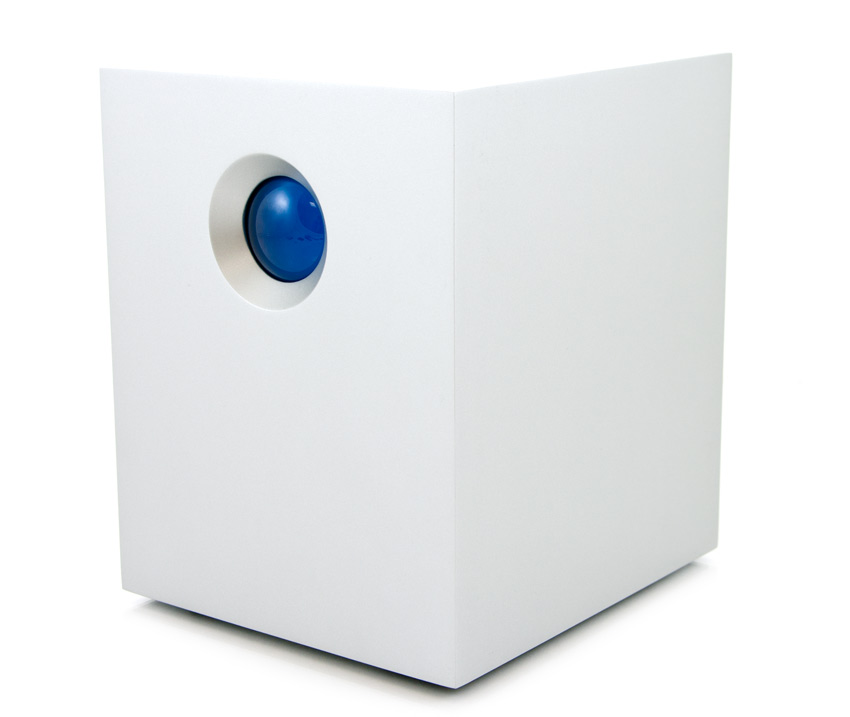 Little has changed from the external design of the 5big Network 2. The 5Big Office + looks and feels extremely rugged, featuring a typical LaCie aluminum construction. The footprint is reasonably compact for a five-drive NAS system, but the unit weighs enough to remind you that this is a NAS meant for stationary use, coming in at nearly 17 pounds with all five drive trays loaded. 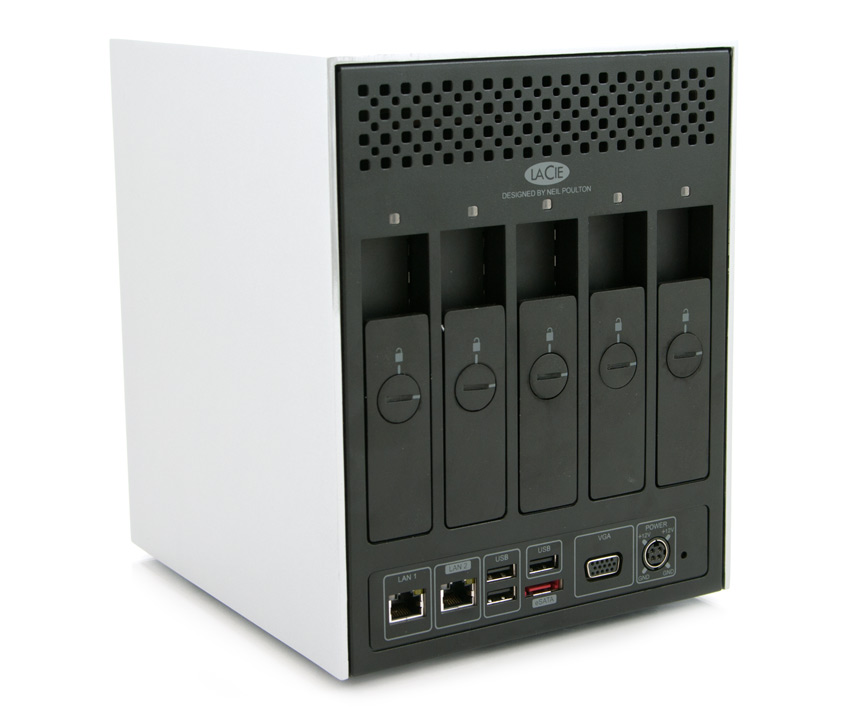 The front of the LaCie 5big Office + is nothing but a power switch and indication light, leaving all the important parts in the rear. The back panel offers access to all the external connections, including dual gigabit Ethernet ports, three USB ports, one eSATA port, a VGA port, and even a meticulously-labeled power connector port.

The drive trays are solid metal, including the locking mechanism, which operates gracefully without the type of spring-loaded latch we often find in enterprise-class drive caddies. The locks are meant for safety versus security, with a simple coin twist unlocking the drive. This is more to prevent accidentally removing a drive tray with the system in production.

The 5big Office + can accommodate up to five 3TB drives with a maximum capacity of 10TB. These drives can be aggregated via RAID 0, 1, 5, 5+spare for improved performance or protection against individual drive failures. LaCie ships a package that includes all five drives, or customers can purchase a single drive edition with room to grow as storage needs increase. 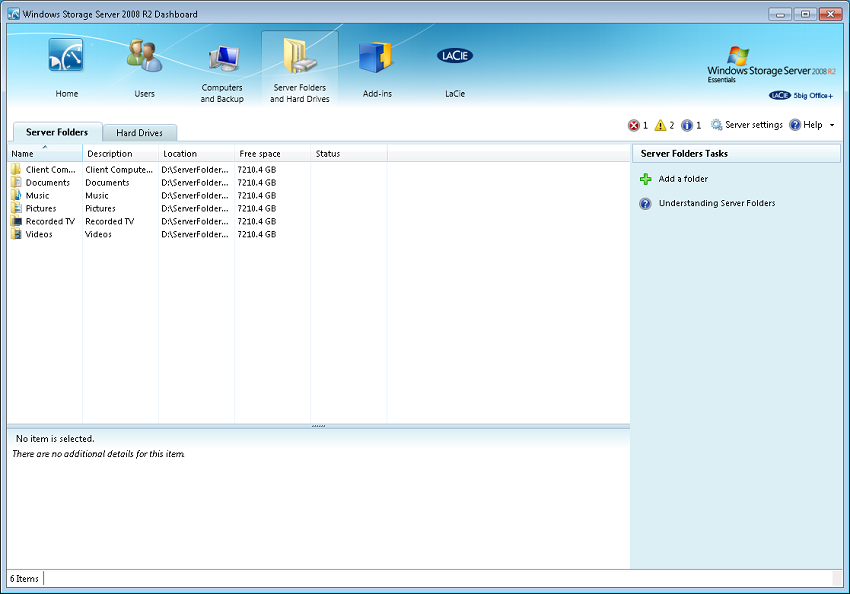 For 5big Office + deployments that automate full system backups for attached PCs, a wizard helps create reinstallation DVDs and USB keys in the case of a crashed or damaged system that needs to be restored to the state captured during the last system backup to the 5big Office +.

The 5big Office + offers link aggregation across its two gigabit Ethernet ports when using LaCie’s Connector backup software on the client system. Supporting 802.3AD, the LaCie 5big Office + can double the bandwidth compared to a single gigabit connection, or offer automatic failover if a connection were to drop. For data protection, the 5big Office + comes with USB and eSATA ports to streamline backups to direct-attached storage that can be disconnected and stored offsite for safekeeping. Windows Storage Server 2008 R2 Essentials also simplifies NAS-to-NAS backups for automated offsite backup.

With on-board support for 802.3AD Link Aggregation, we tested the LaCie 5big Office + in the most optimal conditions most businesses would configure this NAS in their environment. Out of the box both network cards activate in individual DHCP mode, although using the Intel control panel for the NICs, you can team them together. With 802.3AD support, users gain reliability and uptime with automatic failover, as well as the benefit of increased total bandwidth over the same connection for faster read and write performance from multiple clients accessing the network shares.

In our enterprise test lab we used one Lenovo ThinkServer RD240, as well as consumer testing platform to access the LaCie 5big Office + simultaneously. For our network infrastructure we used a Netgear Prosafe GSM7352S 48-Port 1GbE Switch with the LaCie 5big Office + connections setup in a LAG group, with both systems accessing the NAS individually. In aggregate, we measured sequential sustained transfer speeds of 220MB/s read and 78.5MB/s write when passing large files from or to the server. For most small to medium-sized workgroups this should be plenty of speed to handle nightly backups or allow users to collaborate on projects served off the NAS.

Power consumption on the Intel Atom-based platform was excellent, needing around 44 watts at idle, which increased to 55 watts under a constant write load. Power efficiency is one of the main benefits of transitioning to an embedded platform versus running a dedicated server for file sharing. The one caveat is making sure the less-powerful server is capable of handling the network traffic loads in your setups.

LaCie storage solutions are generally known for superior design and their simple NAS OS. The 5big Office + then is a departure, in that it uses a Windows operating system instead of LaCie’s standard layer. While the NAS OS is easy to use, in many small office and SMB environments, Windows dominates, so putting a NAS into production that uses Windows Storage Server is actually easier since it ties into existing IT knowledge and Microsoft management features like Active Directory. LaCie has wisely seen the benefit of offering hardware with Windows inside, the move likely expands their potential client base which is historically Mac-driven.

Setup out of the box was easy; accessing the system directly over the on-board webserver and using that to guide you through the initial setup. In that process you setup the administrator information as well as configure backup options for the computer you are currently accessing it from. Performance was great, especially when the NAS was configured to support Link Aggregation. In our testing we measured transfer speeds in excess of 220MB/s read and 78.5MB/s write, which is very good for a small-business environment with more than a handful of active users. Even with the good performance, it wasn’t heavy on power consumption, sipping only 44 watts at idle and ramping to 55 watts under a steady write load.

LaCie has done a good job with the 5big Office +, leveraging a great existing 5-bay design, this time deploying Windows Storage Server instead of NAS OS. Configuration is simple and integration with other Microsoft tools will certainly be appealing to small offices that have standardized on Microsoft technologies.