The LaCie 5big Thunderbolt 2 is the company’s latest addition to their Mac-centric portfolio of professional 5-Disk RAID device, designed for professionals and businesses that focus on 4K and other bandwidth-heavy workflows as well as for those who need a larger storage solution embedded with LaCie’s pedigree of slick design and reliability. The LaCie 5big is quoted to boast Thunderbolt 2 speeds up 1050MB/s for 4K video editing, up to 30TB in capacity, and hardware RAID5/6 for data security.

The LaCie 5big Thunderbolt 2 is the company’s latest addition to their Mac-centric portfolio of professional 5-Disk RAID device, designed for professionals and businesses that focus on 4K and other bandwidth-heavy workflows as well as for those who need a larger storage solution embedded with LaCie’s pedigree of slick design and reliability. The LaCie 5big is quoted to boast Thunderbolt 2 speeds up 1050MB/s for 4K video editing, up to 30TB in capacity, and hardware RAID5/6 for data security. 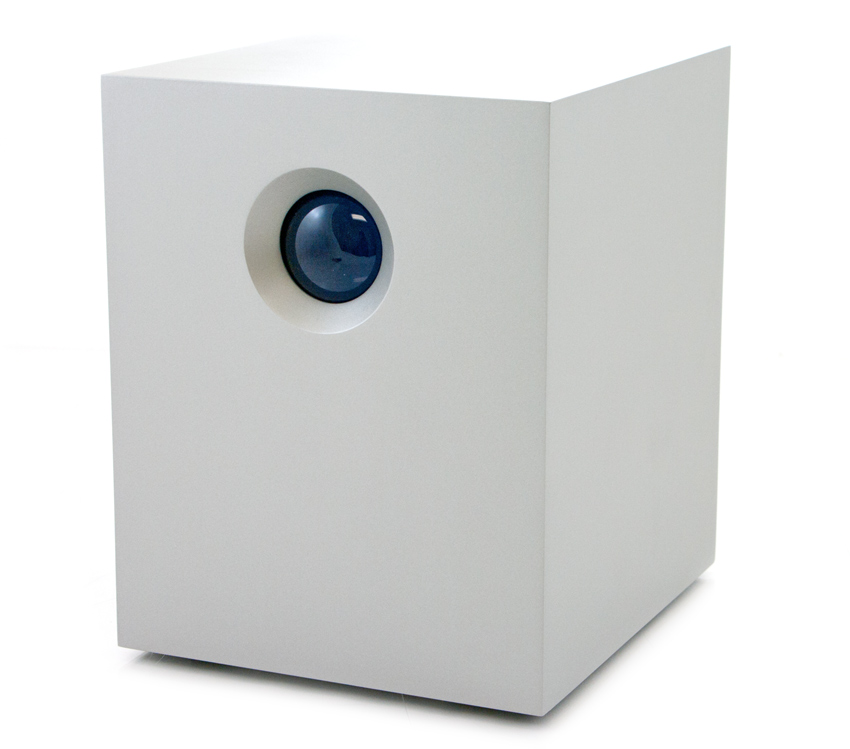 Thunderbolt 2 allows the daisy chaining of up to six devices to a computer using only a single cable that is included in with the 5big. The 5big supports RAID modes 0, 1, 5, 6, 10, and JBOD, offering users solutions for a plethora of different use cases such as RAID0 to maximize speed, RAID6 for ultimate protection, or JBOD for individual disk use. The 5big comes preconfigured in HFS+ and RAID 5 but can be re-configured to the RAID mode of choice using the LaCie RAID Manager utility. LaCie indicates that Mac users will find that its setup is particularly easy, as it is designed to be plug and play compatible for Mac devices.

The LaCie 5big also features a cooling system that helps to ensure long-term reliability due to its heat-dissipating aluminum casing, which diverts and dissipates heat more efficiently than plastic casings that other devices of its class have. The 5big is equipped with a NF-P12 Noctua cooling fan and jumbo heat exhausts, the former which pulls heat away from its internal components while producing very little noise. This will likely be a welcomed feature for noise-sensitive working environments where owners want to show off their sleek, modern storage without bothering those around.

When it comes to the overall look and feel of 5big Thunderbolt 2, it’s obvious that LaCie didn’t change much, as it is virtually identical (even in weight) to the 5big NAS Pro and the 5big Office–with the exception of its rear connectivity. That being said, the 5big Thunderbolt 2 consists of an all-aluminum casing that feels very rugged when handled. Though it will likely remain idle on an office desk, the device feels like it can take a beating if need be. 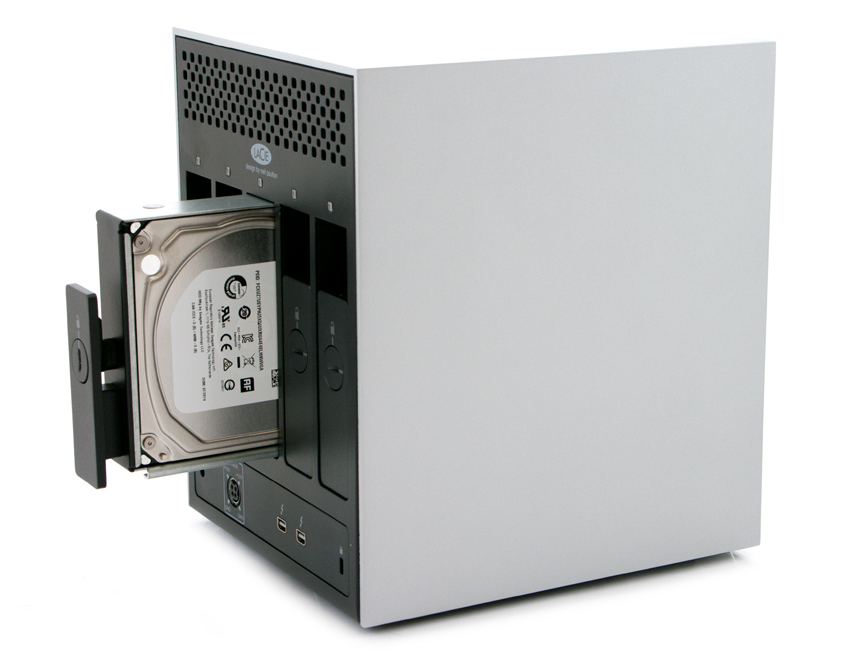 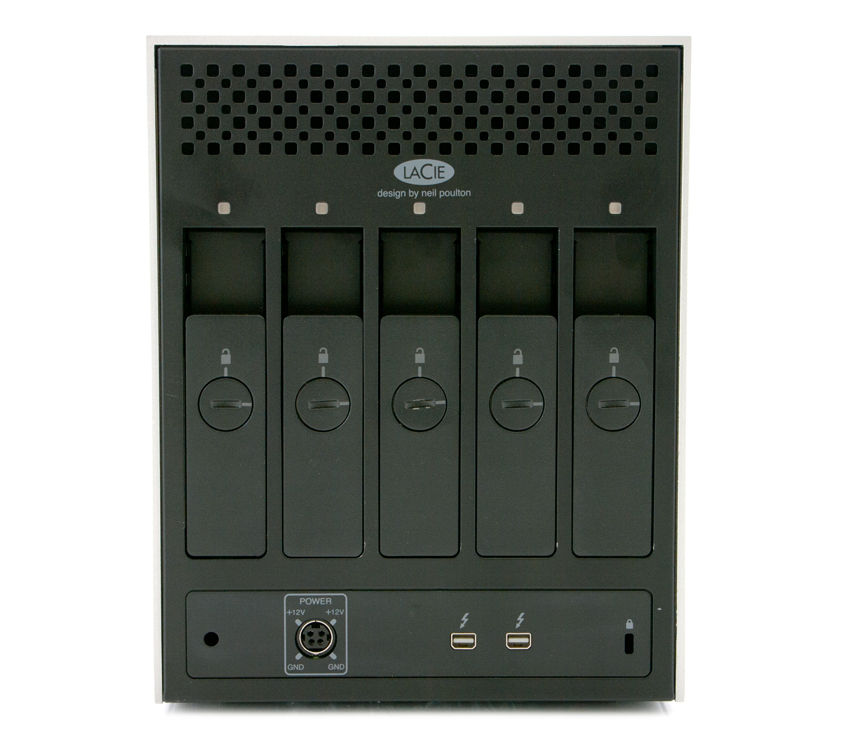 The five drive bays are accessed via the rear panel, each of which has their own status LED to indicate hard drive activity and health. The hot-swappable hard drive trays can be unlocked and removed to replace hard drives when need.

As for connectivity and functionality, the rear panel is equipped with a cable management clasp port, a power input, and two Thunderbolt 2 ports (both of which are not preconfigured with specific roles so that users can use either port as the host or the daisy chain). Also present are Kensington lock port and a Hard drive tray lock; the hard drive trays are secure when the indicator points to the locked icon.

The LaCie 5big Thunderbolt 2 is shipped preconfigured in HFS+ and RAID5; however, LaCie's RAID Manager is available to configure the device into different the RAID. The RAID utility’s interface is pretty straight forward (though it looks nothing like LaCie's other Mac-centric software), consisting of three sections: Storage, Properties, and Event Logs. In addition, LaCie has included buttons for users to power off the LaCie device or to identify it within the software. That being said, it was a bit off-putting LaCie's mandate is all about beautiful GUI and ease of use, whereas the RAID Manager is a Marvell-based add-on (installed from the web) that has an unappealing interface.

When Adapter is selected in the Storage section, specially assigned buttons will become available: the Power-off button, which puts the LaCie 5big into idle mode (this is also achieved by short pressing the enclosure’s power button). The Mute button turn offs the sound on an audible alarm.

For performance, we measured transfer speeds from the LaCie 5big drive connected to a current generation MacBook Pro that supports Thunderbolt 2 using the Blackmagic Disk Speed Test with a 5GB test file. We tested the following configurations:

We first tested the 5big Thunderbolt 2 in RAID0 (the highest performing RAID configuration) and RAID5 (which is capable of speeds closest to RAID0, while giving users data protection). Results showed that read and write speeds reached 805.1MB/s and 789.1MB/s for RAID0 mode and 542.4MB/s and 758.3MB/s for RAID5 mode, respectively. 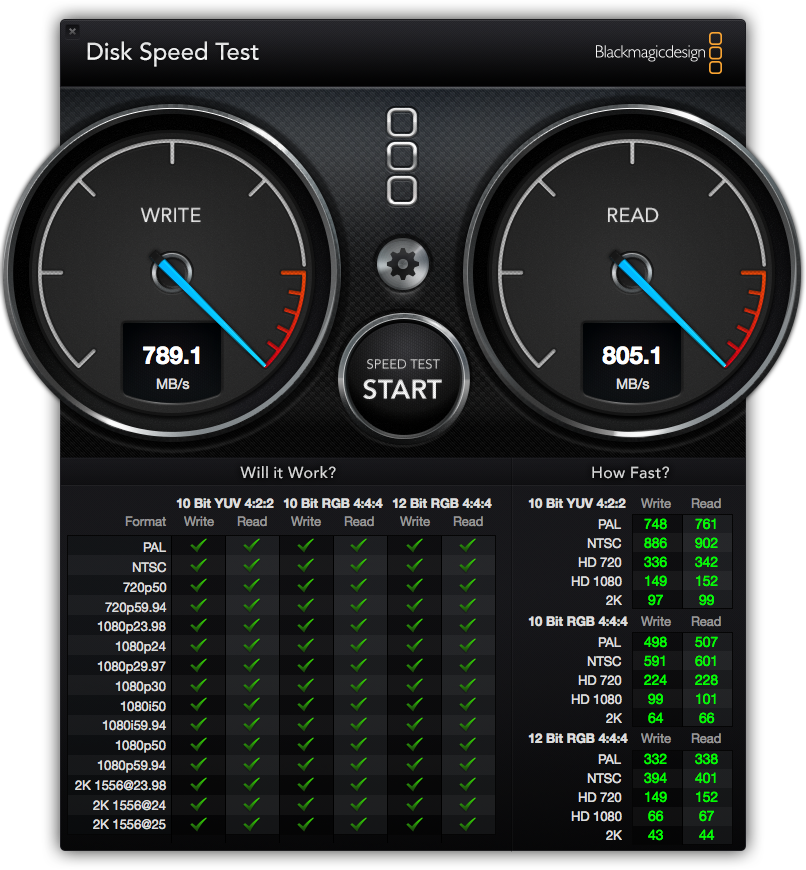 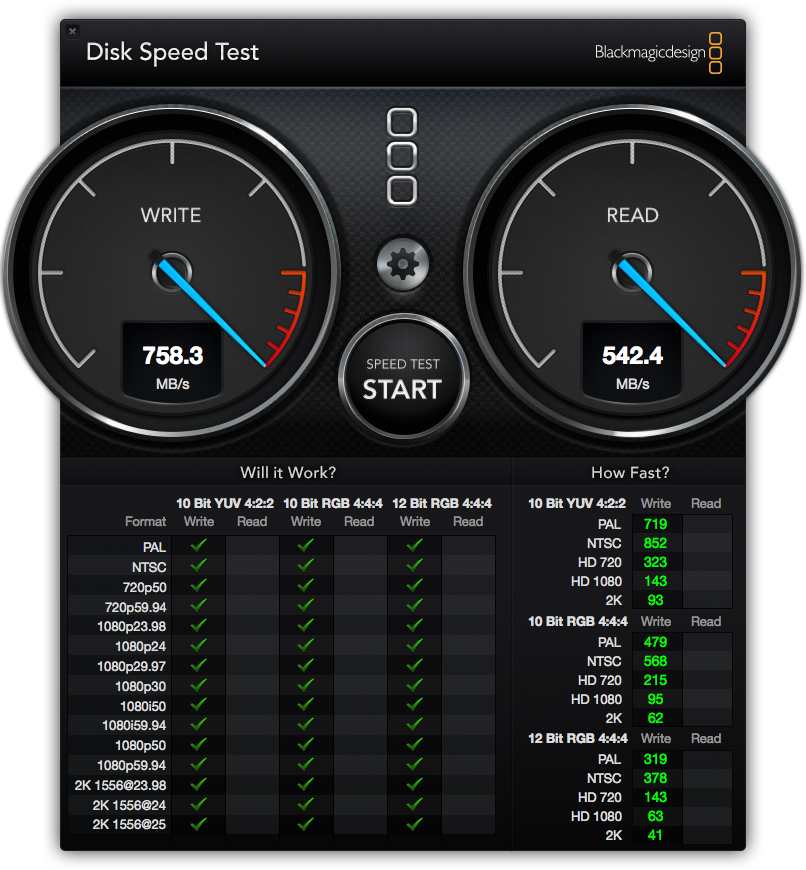 Next, we tested the LaCie 5big Thunderbolt 2 in RAID6 (which supports up to two disk failures with no data loss) which posted 467.1MB/s read and 570.6MB/s write, and in RAID10 (a combination of RAID1 and RAID0), which showed 328.6MB/s read and 345.8MB/s write. Overall, these are pretty impressive numbers with gains over the previous generation of the LaCie 5big. 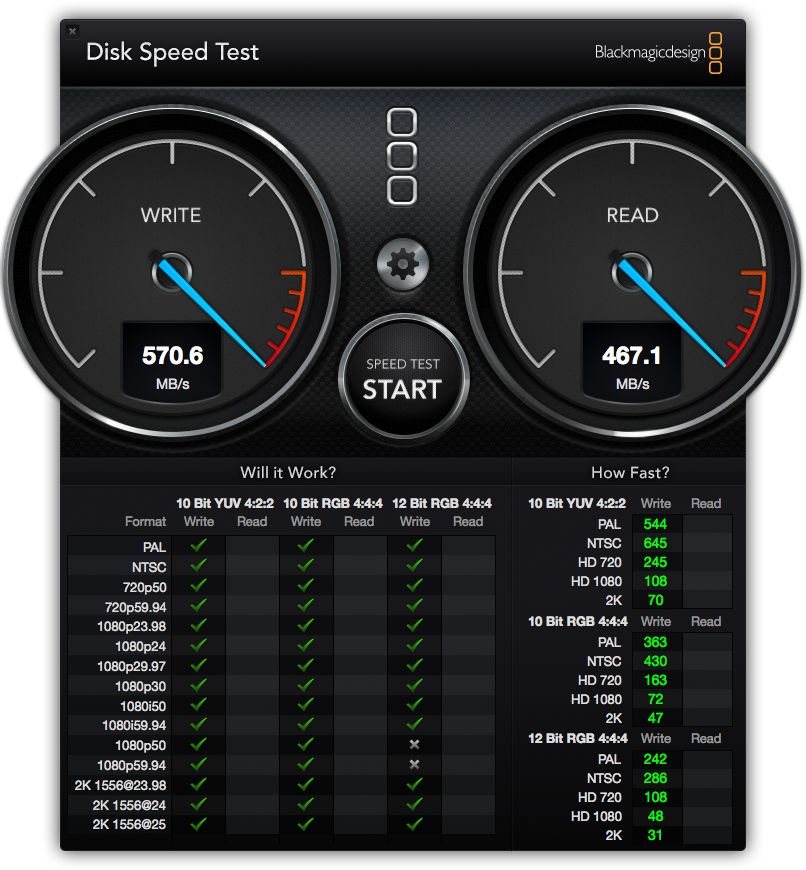 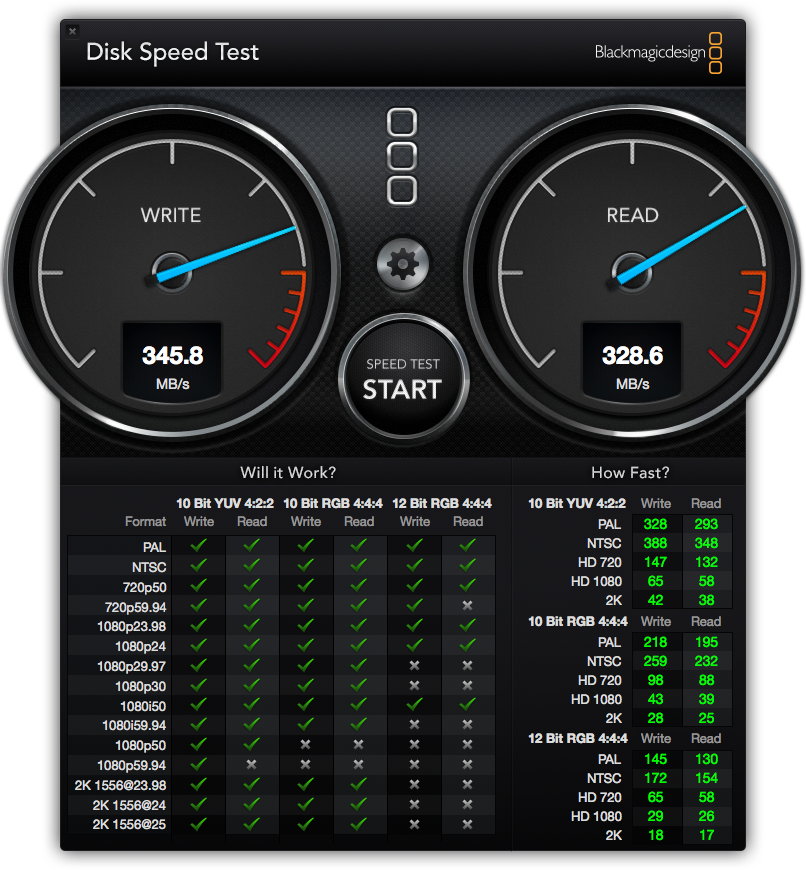 We’ve also included the performance numbers for the LaCie 8big Rack Thunderbolt 2 as an informal comparison so buyers can see the scaling from 5 to 8 drives. While both the 5big and 8big are designed as an ideal storage appliance for videographers and other media professionals that 4K video-editing workstations, the 8big is meant to fit into a standard rack.

The LaCie 5big Thunderbolt 2 is a unique 5-Disk RAID storage solution that offers some pretty serious performance numbers and a pretty big storage pool with up to 30TB in capacity. As such, media professionals and businesses with 4K and other bandwidth-heavy workflows will find a lot to love with LaCie’s new device, especially now that it is possible for users to daisy chain ultra-high resolution displays such as 4K monitors. Additionally, users can take full advantage of Thunderbolt 2 technology (20Gb/s, which is double the speed compared to the last gen Thunderbolt) by daisy chaining up to six devices to a computer using only a single cable, which is included in the 5big’s box. Users who like showing off LaCie’s slick, futuristic designed products will also find that the 5big delivers on that front, with its attractive, minimalist, all-aluminum build. Coupling this with its whisper-quiet operation, it makes for the perfect storage companion to sit out in the open next to a workstation.

Though we couldn’t get the LaCie 5big to reach its quoted Thunderbolt 2 speeds of 1050MB/s (those results vary based on test tool and configuration), it did post pretty impressive numbers. In RAID0, we recorded read and write speeds reached 805.1MB/s and 789.1MB/s, respectively. This will definitely allow media professionals to seamlessly edit HD/4K videos on the fly with no performance degradation whatsoever. Even in a more secure RAID mode showed speedy results, with RAID5 mode boasting read and writes of 542.4MB/s and 758.3MB/s, respectively. With its hefty price tag, we expected nothing less than top performance.

Like their other models that use the Marvell drive configuration tool, the 5big suffers the same issues. It's not hard to use the tool, but it's not up to LaCie's standards either, something they may address in the future if they're able to build their own or gain deeper access into the Marvell UI code. The tool gets the job done though and isn't something that's interacted with on a regular basis.

With upwards of 30TB in capacity, speedy performance, and a premium build, the LaCie 5big offers an impressive (and highly recommended) storage solution for media professionals and those with bandwidth-heavy workflows.