With the availability of Intel’s Xeon E5-2600 v3 family of processors, a variety of server vendors are launching compute platforms that take advantage of the performance increases of the new Xeon architecture. The DL360 Gen9 is the new mainstream 1U compute platform in the HP ProLiant family, and in addition to featuring new E5-2600 v3 processors and DD4 memory, the DL360 Gen9 reflects several progressive advancements in HP’s server technology portfolio and the company’s overall vision for converged data centers.

With the availability of Intel’s Xeon E5-2600 v3 family of processors, a variety of server vendors are launching compute platforms that take advantage of the performance increases of the new Xeon architecture. The DL360 Gen9 is the new mainstream 1U compute platform in the HP ProLiant family, and in addition to featuring new E5-2600 v3 processors and DD4 memory, the DL360 Gen9 reflects several progressive advancements in HP’s server technology portfolio and the company’s overall vision for converged data centers.

Like the larger 2U DL380 Gen9, the DL360 leverages new Intel Xeon E5-2600 v3 processors and up to 768GB of HP’s DDR4 Smart Memory at speeds of up to 2,133MHz, up from the maximum 1,866MHz DDR3 transfers rate of its Gen8 predecessors. The new E5-2600 v3 processors are available with up to 18 cores and offer a theoretical performance improvement of up to three times per Watt over Gen8 ProLiant servers. HP’s latest 12Gb/s Smart Array Controllers and PCIe accelerators are also available for the DL360 Gen9. Unlike its DL360p Gen8 predecessor, the DL360 Gen9 supports GPUs: up to two single-wide and active cards up to 9.5 inches in length.

The unit being benchmarked during this review utilizes the 1U DL360 chassis with eight SFF drive bays and is configured with two Intel Xeon E5-2697 v3 2.6GHz processors, 256GB DDR4 RAM (16 DIMMs of 16GB 2Rx4 PC4-2133) and five SFF 400GB SAS SSDs. The Universal Media Bay is not filled in our testing unit, but can optionally be used to house two additional SFF drive bays or an optical drive and front-accessible VGA port. We utilize HP’s two-port PCA FLR 10GbE SFP+ interface card for network connectivity.

Our review unit uses a chassis with eight front-accessible SFF drive bays plus a blank in the Universal Media Bay at the top-right which can be configured with two additional SFF drives or a combination of an optical drive and a front-accessible VGA port. A status panel with the power button and LED indicators for power status, system health, unit ID, and network status is available at the far right along with one USB port. A DL360 Gen9 chassis with four LFF drive bays is also available.

The fan grid provides cooling at the front of the system. Our configuration uses two Intel Xeon E5-2697 v3 2.6GHz processors and fills 16 of the 24 DIMM slots. This system uses 16GB 2Rx4 PC4-2133 DDR4 DIMMs for a total of 256GB DDR4 memory. A MicroSD slot lies between the power supplies and the DIMM slots. A secondary PCIe riser with a third PCIe slot can be utilized for DL360 configurations like this with dual CPUs, and a FlexibleLOM slot and two SATA ports are also located at rear. 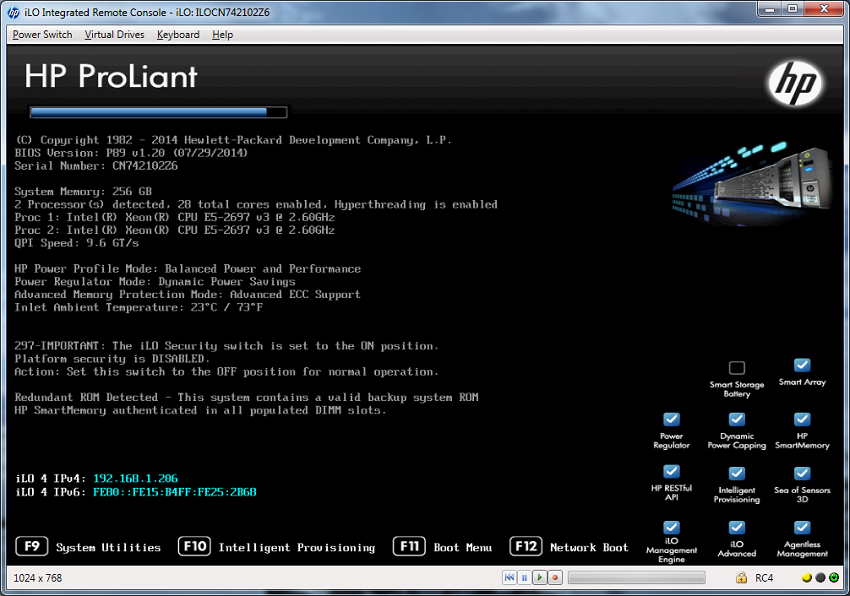 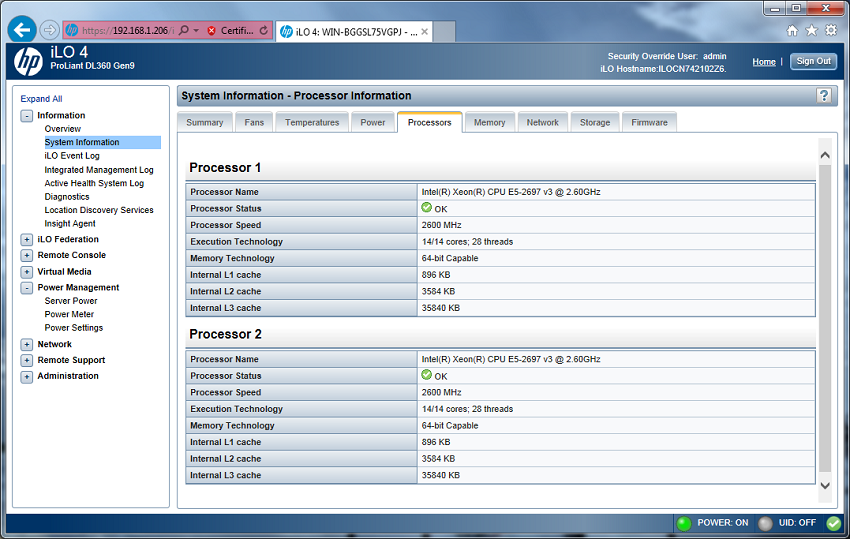 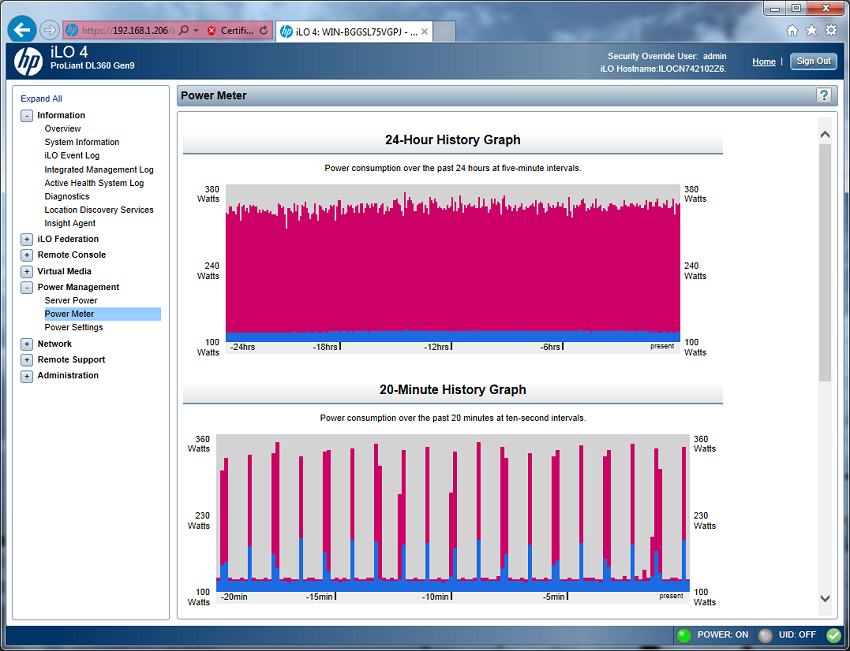 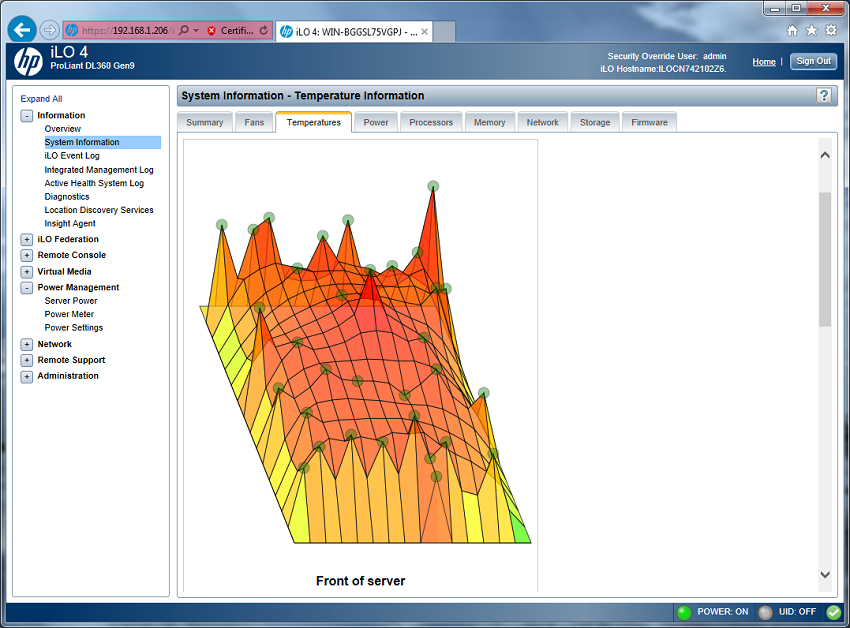 License keys for both HP OneView and HP Insight Control are provided for use on the same system for customers planning to transition to OneView once it is available later in 2014. OneView is designed to unify HP management across servers, storage, and networking by offering software-defined templates, a centralized automation hub, and other features designed to underlay a transition to Infrastructure-as-a-Service (IaaS) and hybrid cloud architectures.

Our first set of results will present the ProLiant DL360 Gen9 as shipped, with a RAID10 volume utilizing four of the installed SSDs and the fifth as a boot drive. The second set of results measure the performance of the DL360's FlexibleLOM PCA FLR 10GbE SFP+ network interface card when connected to an all flash array to illustrate network storage performance.

The DL360 Gen9 hit a maximum latency of 86.6ms during random 4k read operations, while the maximum latency for 4k write operations was only somewhat higher at 112.3ms. The DL360's 10GbE network interface kept its maximum 4k read latency to 60.9ms and maximum write latency to 28.4ms when we tested it with the all-flash array.

Standard deviation results reveal that there was a greater variation in latency results for 4k write operations with the RAID10 SSD volume, which is consistent with the 4k results up to here.

The next results are derived from a protocol composed of random 70% read operations and 30% write operations with an 8k workload across a range of thread and queue counts. The DL360 Gen9 with an internal RAID10 volume experienced no unexpectedly difficult combinations of thread count and queue depth. The RAID10 volume's throughput appears to be approaching its maximum at 75,147IOPS with a thread count of 16 and a queue depth of 8. Throughput to the all flash array via the 10GbE interface at 16 threads and a queue depth of 16 hits 218,801IOPS.

During the first few workload iterations of the 8k 70/30 benchmark, the 10GbE all flash array configuration kept its average latencies near the theoretical minimum of this configuration at approximately 0.23ms. Neither configuration experienced any unexpected trouble spots in terms of average latency during this protocol.

The standard deviation plots for the 8k 70/30 benchmark also reflect the larger maximum latencies experienced by the RAID10 configuration with large queues. Standard deviation calculations show how the RAID10 array has its most trouble producing consistent latency at the top end of the workloads.

The HP ProLiant DL360 Gen9 has the engineering to serve as a useful component in a converged enterprise or data center architecture in conjunction with HP's OneView platform and the company's other innovations in management that makes coordinating hundreds or thousands of servers easy. For those with more modest computing goals, the DL360 Gen9 has the storage density and compute power to serve as a flexible and powerful addition to a variety of environments. HP has embraced the core advancements in technology with the DL300 family, including Intel's latest chipset, DDR4 DRAM, 10GbE and SAS3 drive support. In our case the server is paired with 2.5" SSDs, though the DL360 could be used with four 3.5" drives instead if capacity over performance is preferred. Overall, there's nothing revolutionary about the DL300 family, but there's a reason HP has shipped more servers than anyone else, and with this update HP continues to deliver core computing functionality that addresses the concerns of an overwhelming majority of the market.

In our configuration with five "legacy" SanDisk Pliant-based SAS2 SLC-based SSDs, we saw what we'd expect in regards to proven and stable performance. In addition to strong performance from its internal storage, the availability of high performance 10GbE interfaces means that the DL360 Gen9 can be placed in front of high-speed storage arrays in order to drive huge IO with minimal network-induced latency and fewer cables. In many installations where the DL360 will find itself, load generation against performance storage will be a popular use case. In our testing we paired the DL360 Gen9 with a Windows Server 2012 R2-based all flash array and saw numbers that easily saturated the twin-10GbE connectivity. We drove strong mixed workload I/O, topping 218kIOPS 8k 70/30 random, as well as over 2.3GB/s large-block sequential. Since this leveraged the internal FlexibleLOM slot, we were able to leave all of the additional PCIe slots open for future expansion.

The revamped Gen9 ProLiant family continues to be the Steady Eddie of servers. HP took all of what's new, applied the features across the family and paused there. While we've seen other server vendors getting creative with storage density in 1U and 2U form factors, HP is playing a larger numbers game, providing their buyers with exactly what they're requesting. While others are putting emerging technology to work in some cases, HP's stance is more pragmatic; when there's a large enough calling for new tech, they'll put it in. For now, they're banking on a solid history of build quality, management and cost structure to keep them ahead of the crowd in the core server business.

The HP ProLiant DL360 Gen9 offers data centers that are driven by dense computing a 1U server that builds on HP's server pedigree and delivers gains in both performance and power efficiency over the prior Gen8 family.