After our early experimentation with ThinkPad T410 review, we have the opportunity for a follow-up with Lenovo’s new Sandy Bridge ThinkPad T520. The T520, like most of Lenovo’s new kit, offers support for bootable mSATA SSDs, like Intel’s SSD 310. On the performance side, the T520 gets a second generation Intel Core processor and either Intel HD integrated graphics or nVIDIA discrete graphics. A big boost in power is also on the horizon with an optional slice-battery, increasing runtime of the ThinkPad T420 to an eye-popping 24 hours. Lenovo has also bettered the 3G performance by 15%, thanks to a new antenna design. Read on to see what we think about this new system from Lenovo.

After our early experimentation with ThinkPad T410 review, we have the opportunity for a follow-up with Lenovo’s new Sandy Bridge ThinkPad T520. The T520, like most of Lenovo’s new kit, offers support for bootable mSATA SSDs, like Intel’s SSD 310. On the performance side, the T520 gets a second generation Intel Core processor and either Intel HD integrated graphics or nVIDIA discrete graphics. A big boost in power is also on the horizon with an optional slice-battery, increasing runtime of the ThinkPad T420 to an eye-popping 24 hours. Lenovo has also bettered the 3G performance by 15%, thanks to a new antenna design. Read on to see what we think about this new system from Lenovo.

In terms of storage, the ThinkPad T520 is configurable with either an HDD or SSD as the primary drive and it supports the Ultrabay for use with an optional data drive. As noted, the mSATA port provides a third storage option, and is bootable with a special SSD like the Intel SSD 310, replacing the WWAN module. In our full review we’ll run the T520 through a our gamut of HDDs and SSDs to test, but for now look at performance using the suite of new Intel SSDs including the SSD 310, 320, and high performance 510. 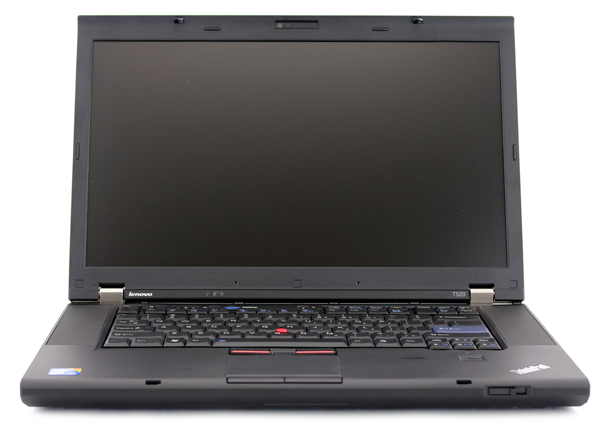 At first glance it doesn’t look like much has changed in terms of the design of the ThinkPad T520. Lenovo has the same black rubbery paint covering the boxy shell of a body, with large stainless steel hinges displayed on both sides. The only thing displayed on the screen cover is the ThinkPad brand logo and the Lenovo name, keeping the rest matte black.

The bottom of the notebook does have one significant change. Unlike previous generations, the bottom is made entirely of plastic now which you can tell from the moment you scratch your fingernail across it. I am undecided on if this weakens the durability of the notebook though, since the system still features the strong alloy unibody chassis. It also doesn’t appear to increase flex at first glance, which is a very good sign. 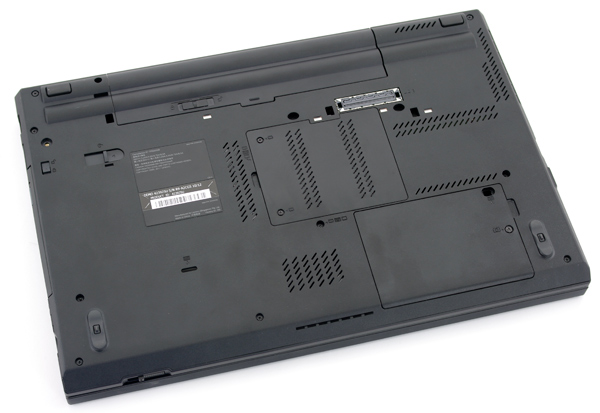 Ease of access to system components like the RAM and hard drive are still included on the T520 through two covers on the bottom of the chassis. One houses the lower memory slot, while the other gives access to the primary 2.5-inch drive bay. The rest of the components are accessible through the top, directly underneath the keyboard. This includes the upper memory slot, CPU, Wi-Fi card, WWAN/mSATA slot, and SIM-card slot.

I think its safe to say the mSATA standard is probably one of the best things that’s happened to notebooks in a long time. With some additional circuitry, mobile platforms can now have up to 80GB of storage space included on a card roughly the size of a house key. What this means for consumers is now systems can be built smaller and still retain a user-replaceable storage drive, or on large systems the legacy 2.5-inch bay can be used for media storage. In the past you might have to make the compromise between storage capacity and the high cost of an SSD. Now you can stick a high capacity platter drive in the primary bay and still have a fast SSD as the boot drive. 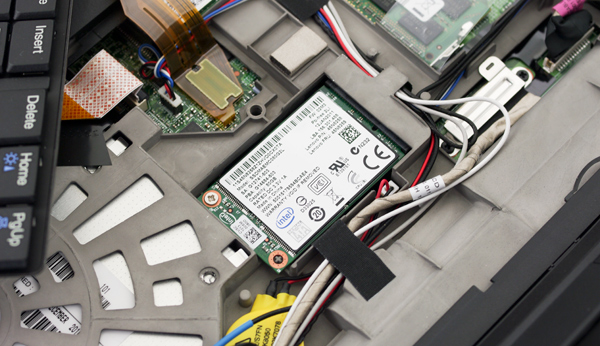 The ThinkPad T520 also supports the same secondary hard drive UltraBay adapter as the T410 we reviewed earlier this year, meaning users can have a total of three drives in their 14 or 15-inch notebooks. How cool is that?

In terms of storage performance, one area did concern us greatly. When most people think of the Sandy Bridge platform, one of the first things that pops up in their their heads is faster processors, less power consumption, and SATA 6.0Gbps speeds. In our review system with the latest Intel drives installed, the fastest negotiated speed from the primary storage bay was 3.0Gbps. This brings back some memories of older systems that were held back to 1.5Gbps speeds when 3.0 was the new standard. We are investigating right now to find out if this was intended and if so, how many new ThinkPad models it applies to.

Update: After further testing and many benchmark runs, we are now seeing full SATA 6.0Gbps negotiation speeds through the primary drive bay. We either ran into a strange driver quirk after drive cloning, but from what we can tell right now is things are back to where they should be. Crisis averted! Stay tuned for our full review where we test the ThinkPad T520 with the Intel SSD 510, Micron m4, and the OCZ Vertex 3 showing their full potential on a mobile platform. 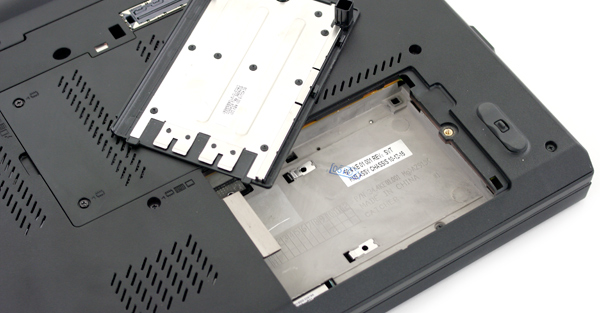 Even with reduced potential from the SATA bus, we still saw very strong performance from the ThinkPad T520. For a system with “only” integrated graphics, it still easily beat the overall system performance of the ThinkPad T410 we reviewed by a factor of two. PCMark Vantage scores doubled, coming in at 12,329 PCMarks, even with the base mSATA 80GB SSD. The latest generation of Intel integrated graphics also handily beat the NVIDIA NVS 3100M at 3DMark06 scoring over 5,000 3DMarks.

To get as close to a baseline power consumption rate as possible, we decided to test the Lenovo ThinkPad T520 using the 80GB Intel mSATA SSD 310 as the only drive installed. In the full review we will show runtimes including two drives, to show how that would affect battery life. Our initial test was setup to our road-warrior standards, which includes the screen brightness reduced to 50%, the CPU set to power saving mode, wireless on and refreshing a webpage without Flash-based ads, and Bluetooth disabled. In this profile the system used as little as 5.6 watts of power and showed an expected runtime of 11.5 hours halfway through. Not too shabby for a 15.6-inch notebook with a 6-cell battery. Just imagine the amount of time you could get on the 9-cell battery plus slice.

We expect to wrap up our full review of the Lenovo ThinkPad T520 in the next couple of weeks. We will be following the same review style as our previous review, which included benchmarking the notebook using a set group of drives. Since the selection of drives has changed drastically in the past month, our test group has changed to now include the Crucial m4, Intel SSD 320, Intel SSD 310, and OCZ Vertex 3. If you have any questions or requests during the review process, feel free to shoot a question our way in our Test Lab forum. If your request is reasonable we will do whatever we can to get you an answer.