The Lenovo ThinkServer RD630 represents a calculated entry into the server market: an affordable server with specifications that support database applications and virtualized infrastructure. The RD630 was announced earlier this year as part of an initiative to expand the ThinkServer brand into enterprise cloud and virtualization deployments. It is a scalable 2U rack server solution featuring hardware RAID and eight to sixteen 2.5-inch hot-swap SAS or SATA drives. Powering the ThinkServer is the Intel Xeon E5-2600 processor family with the Intel C602 Chipset. New products like the RD630 are positioning Lenovo to take on other OEMs like Dell and HP that already operate in the enterprise server market.

The Lenovo ThinkServer RD630 represents a calculated entry into the server market: an affordable server with specifications that support database applications and virtualized infrastructure. The RD630 was announced earlier this year as part of an initiative to expand the ThinkServer brand into enterprise cloud and virtualization deployments. It is a scalable 2U rack server solution featuring hardware RAID and eight to sixteen 2.5-inch hot-swap SAS or SATA drives. Powering the ThinkServer is the Intel Xeon E5-2600 processor family with the Intel C602 Chipset. New products like the RD630 are positioning Lenovo to take on other OEMs like Dell and HP that already operate in the enterprise server market.

The newest generation of servers rely on Intel’s Romley platform which gives storage devices more headroom to operate thanks in part to the increased bandwidth from PCIe 3.0. Many of the latest PCIe Application Accelerators, RAID cards and even network interconnects rely on PCIe 3.0 for faster speeds which saturated older 2.0 platforms. As we test these devices in platforms such as the RD630, we quickly get to find benefits or limitations of hardware designs, that might be overlooked by other publications. StorageReview’s Enterprise Lab also provides an ideal location to see how the RD630 performs with a wide array of devices, which includes SANS, custom all-flash storage arrays, the latest PCIe flash storage solutions, and many other enterprise solutions that can begin to stress the newest servers.

The RAID 500 adapter supports RAID 0,1,10 and optionally RAID 5, with the ThinkServer RAID 500 RAID 5 upgrade key. The RAID 700 adapter supports RAID 0/1/5/10/6/50/60, also featuring a 512MB cache and compatibility with the optional ThinkServer RAID 700 battery. The RAID 700 battery protects unwritten data in the controller cache for up to 48 hours during power failures. 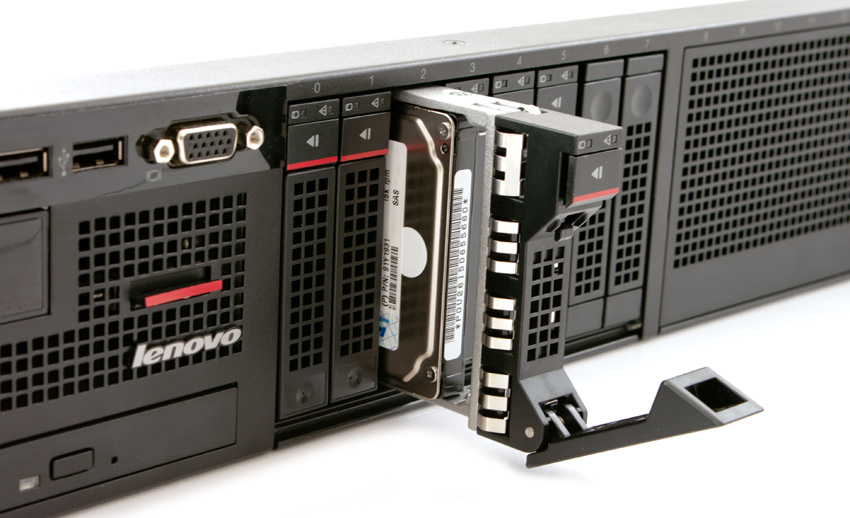 Internally the RAID 500 and 700 adapters take up one available PCIe 3.0 slot, which depending on the final build could mean a lot not available for another device. Compared to servers like the HP ProLiant DL380p with an integrated on-motherboard RAID solution this could either be pro or a con. On one side you lose a slot, on the other, it is easy to upgrade down the road to the next best technology or quickly swap out in the event it fails. Integrated solutions in that case would require the motherboard to be replaced.

The ThinkServer RD630 provides a bank of forward-facing indicators for monitoring essential components and diagnostics. At a moment’s glance you can quickly tell if one of the fans has failed, a stick of RAM is faulty, or even if the internally temperature are running too high. Depending on the RD630 configuration, the front panel will feature either the Intelligent Diagnostics Module (IDM) or Intelligent Diagnostics Module Premium (IDM Premium). The IDM displays status information on the power supplies, ambient temperature, system fans, memory modules, and processor. The IDM Premium module offers more detailed information on the power supplies, ambient temperature, and system fans, as well as DIMM status listed by CPU. 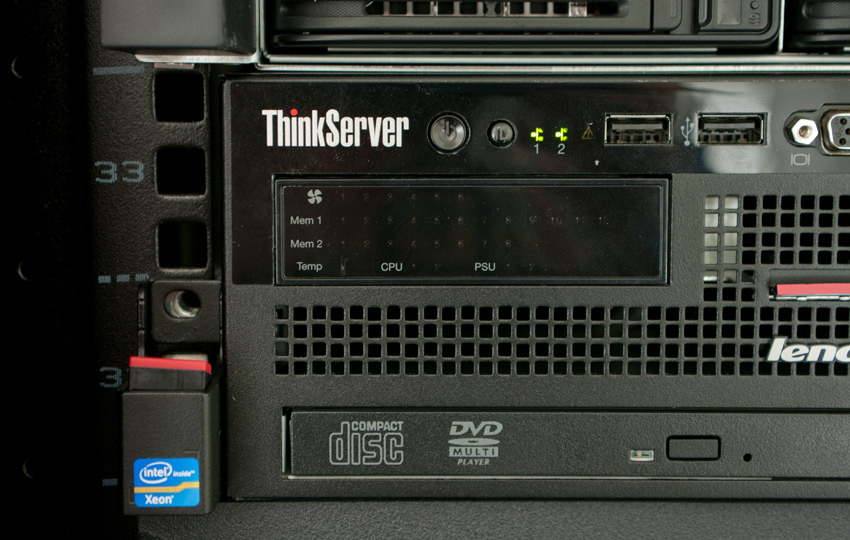 The integrated ThinkServer Management Module (iBMC) is IPMI Serial-over-LAN 2.0 compliant, and is accessible by remote KVM and controllable via LAN or Internet. 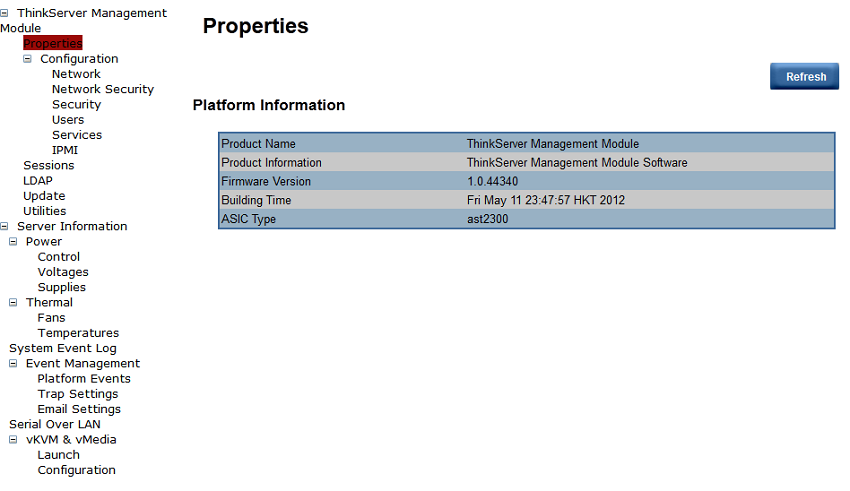 Design and Build
All of Lenovo’s RD630 solutions are 2U rackmount systems that ship with sliding rails standard. An optional cable management arm is also offered, to allow an excess length of cables behind the server, giving it enough slack to be completely slid out for servicing without disconnecting anything. Without rack handles, the RD630 measures 17.4” wide and 28.37” deep and 3.45″ tall. With handles, it measures 19” wide by 28.9 deep.

The front of models with hot-swappable 2.5-inch hard disk drives consists of three sections. The left side includes the front panel board, two USB ports, a VGA DB-15 connector, the diagnostic module, pull-out information card, and the optical drive bay. The middle incorporates drive bays 0 through 7. An EMI-protective panel covers the right cage on our RD630 where eight additional drives can be installed in some RD630 systems.

A side profile shot shows the integrated sliding-rail attachment points, which drop into slots in the rails instead of using screws. This method of installation really requires two people to safely install the server without dropping it, although if you are strong enough you can do it by yourself. We were able to accomplish this by latching the server into one rail, holding it up and moving to the other side where we connected the remaining attachment points. The rail design was very similar to what we saw on the HP ProLiant DL380p, which also required two people to install the server into a rack.

We were very impressed by the clean layout and cable management found inside the ThinkServer RD630. Compared to the ThinkServer RD240 we reviewed earlier this year Lenovo has really cleared out all obstructions between the cooling fans and the rear of the chassis. Cabling required for the front SAS expander is neatly tucked to the side, giving the airflow a clean path across the CPUs, memory slots, and expansion cards. 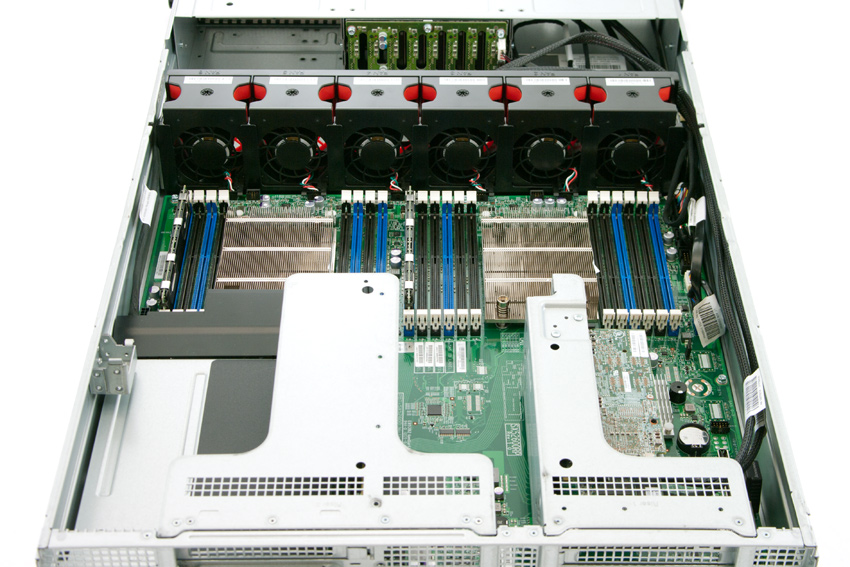 The RD630 features 20 DIMM slots, allowing up to 320GB of RVDIMM or LVDIMM DDR3-1333 memory to be installed, though when using LV RDIMM memory a maximum of 16 DIMMs can be populated. CPU 1 provides 12 memory slots, and CPU 2 provides the remaining 8 slots.

The RD630 uses six hot-swap system fans with one redundant unit; five system fans meet the system’s cooling requirements with one available as a redundant unit in the case of fan failure. To remove a fan, you pinch the red finger tabs and lift out the fan. Replacing a fan in service takes just seconds, and although a wire connector is seen sticking out from the front of each motor, it too comes out with the fan as one unit.

To help keep the air directed at system components, the ThinkServer RD630 includes plastic ducting to force air over the processor and system memory. Once the air passes over those items, it is directed at the PCIe expansion slots. Fan speeds are automatically throttled based on internal system temperatures. At the time of our review, fan speed is completely automated, with no increased-output setting available. 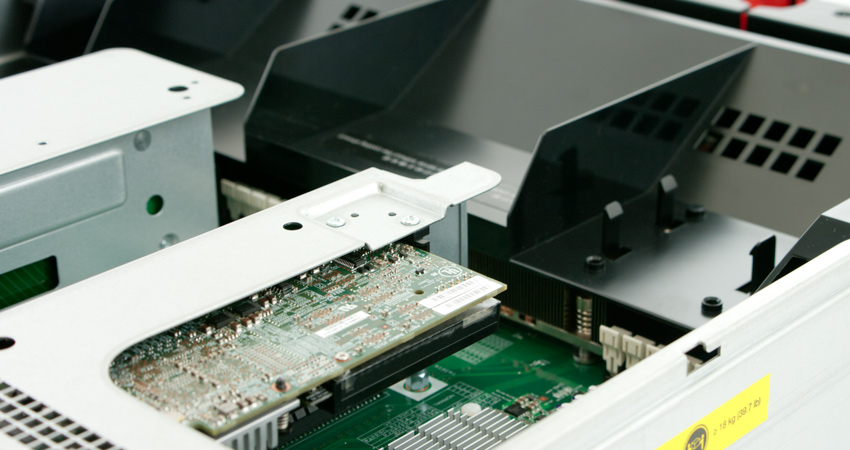 Power
According to Lenovo, the RD630 is up to 45% more efficient than previous generation ThinkServers. Lenovo’s ThinkServer SmartGrid power management technology is based on Intel’s Power Node Manager, providing rack-level management that can scale up to 1,000 servers, with policy-based power capping tools. 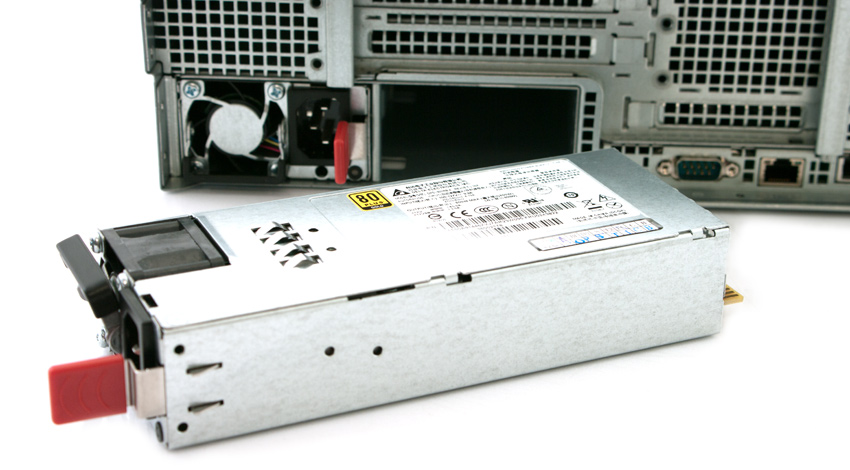 For power efficiency, Lenovo offers RD630 configurations with one or two 800-watt hot-swap redundant power supplies that are Energy Star 80+ Gold-rated. LVDIMM memory is also available as an option to reduce power consumption.

Conclusion
The Lenovo ThinkServer RD630 represents a major step forward for the company in terms of server design and layout. While the ThinkServer RD240 before it was nice, it lacked refinement compared to the mainstream competition. The RD630 looks and feels very much more like a leading enterprise compute server putting Lenovo on more even terms when compared to Dell, HP and others in the mainstream server space.

We’ve been logging an increasing number of hours on the newest-generation of Romley servers, putting us in a great position to see how well each platform responds to different I/O-intensive hardware. Items such as clean cabling layouts, efficient cooling pathways, increased PCIe density to accommodate more hardware all stand out at us as we run equipment in our lab through these systems. From a storage perspective, the ThinkServer RD630 is better-equipped to handle the newest gear, be it SATA or SAS 6.0Gb/s hard drives and SSDs, high-speed networking interconnects, or even the latest crop of second-generation PCIe Application Accelerators. The latter two items come thanks to PCIe 3.0 interfaces, as well as twice the number of slots compared to the previous generation RD240.

While this first part of our Lenovo ThinkServer RD630 review gives a comprehensive overview of the system itself, part two will incorporate performance and compatibility testing with a wide array of storage products. While most SATA and SAS drives will perform roughly the same in any system, the latest PCIe storage solutions have a way of separating the men from the boys in the server world. Stay tuned for our second review installment that will cover these storage concerns and other key areas such as multi-OS performance variability.

The Lenovo RD630 ThinkServer is available for purchase now, and has a starting price of $1,300.