The Lenovo ThinkSystem SE350 is a stubby little server aimed at edge use cases. Everything about the server is built with the edge in mind, not just its size. The SE350 provides several connectivity and security options. The device packs plenty of good gear in a small frame. And the whole thing is managed by the company’s Lenovo XClarity Controller.

The Lenovo ThinkSystem SE350 is a stubby little server aimed at edge use cases. Everything about the server is built with the edge in mind, not just its size. The SE350 provides several connectivity and security options. The device packs plenty of good gear in a small frame. And the whole thing is managed by the company’s Lenovo XClarity Controller. 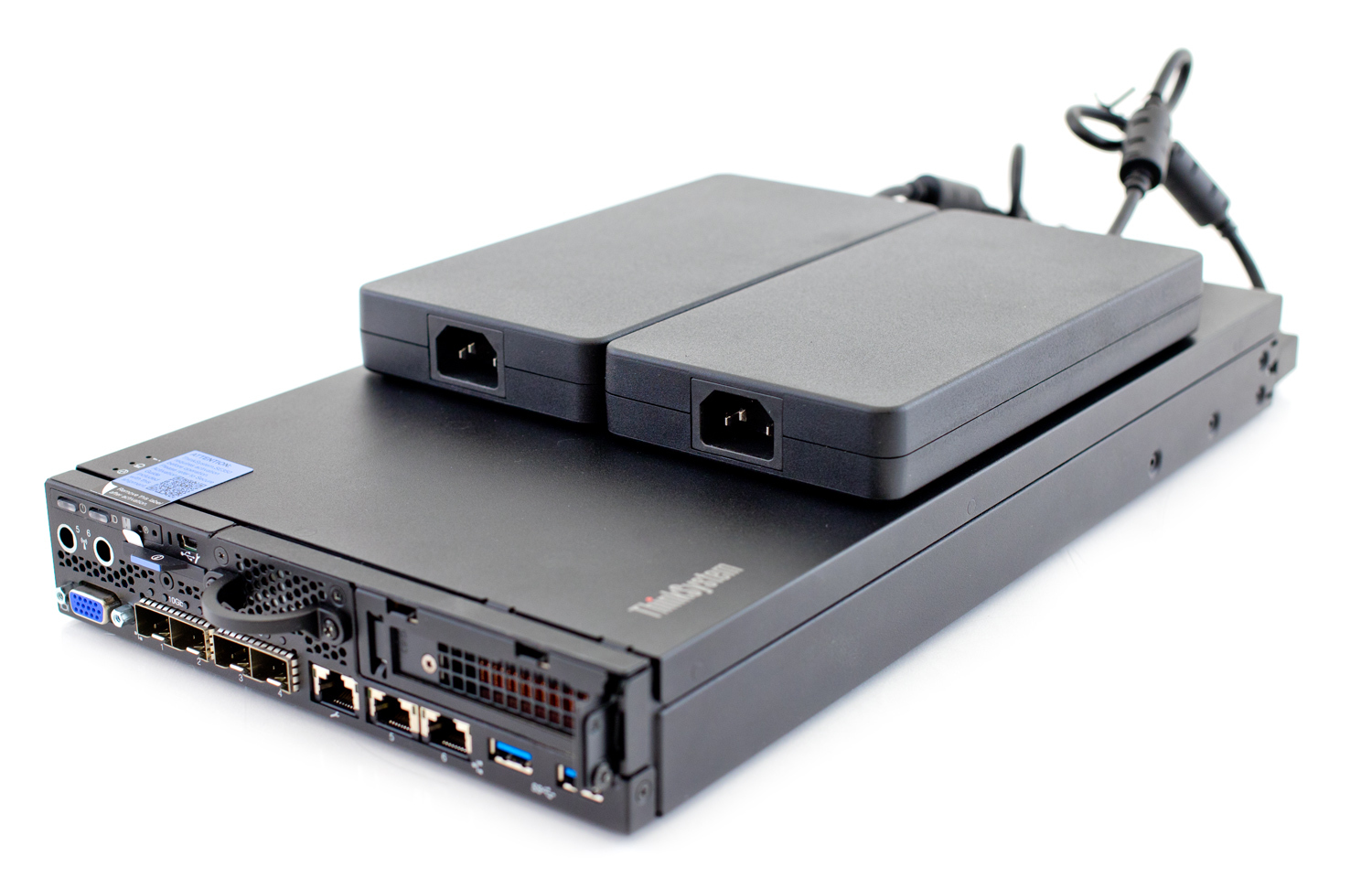 Part of the idea of the edge is to bring computing power, as well as storage and networking, closer to where the data is generated. The Lenovo ThinkSystem SE350 brings Intel Xeon D CPUs, up to 256GB of RAM, and up to 8 M.2 SSD drives (NVMe or SATA) for storage (theoretically 16TB). For networking the server has four different modules depending on users’ needs, including WLAN and LTE antenna options. To top it off, the server can also support an NVIDA Tesla T4 GPU.

We did a video review as well:

Our review system includes the wireless network module and came equipped with an Intel Xeon D-2183IT CPU, 256GB of TruDDR4 2666 MHz RAM, an NVIDIA Tesla T4 GPU, and an assortment of SATA-based M.2 SSDs. The Lenovo ThinkSystem SE350 Edge Server can be picked up for under $1,500 before adding on all the goodies. For our testing, we slotted in a Memblaze 6.4TB C926 NVMe SSD, taking the place of the Tesla T4.

The Lenovo ThinkSystem SE350 Edge is much smaller than a typical server. While retaining a 1U height, the server is not a full rack length (half width) or depth. The statements tend to go that there is less room for full sized servers at the edge so companies keep looking for ways to compact down devices. The SE350 is small enough to be mounted in a variety of different places.

As stated, StorageReview has the wireless network module. This has, running along the bottom, a VGA port, two 10GbE SFP+ Ports, Remote XCC management port, two 1GbE RJ45 ports and two USB 3.1 G1 ports. On the upper half is a PCIe expansion slot on the right, a handle in the middle, nest to a small USB port for local management, a front operator panel, and two reserved SMA ports.

The rear of the unit has spots for two Wireless LAN antenna near the top left and/or two LTE antennas on the right. There is a Serial port, two USB 2.0 ports, and two 12V DC power inputs.

Opened up we can see that Lenovo was able to cram a lot in the SE350. Right near the front we can see the 3 fans right by the CPU and four DIMM slots. On the far side of where the CPU is an M.2 boot adapter for up to two drives. Near the back are the left and right wing slots for up to four M.2 drives (left) or a PCIe device as well as up to four more M.2 drives. 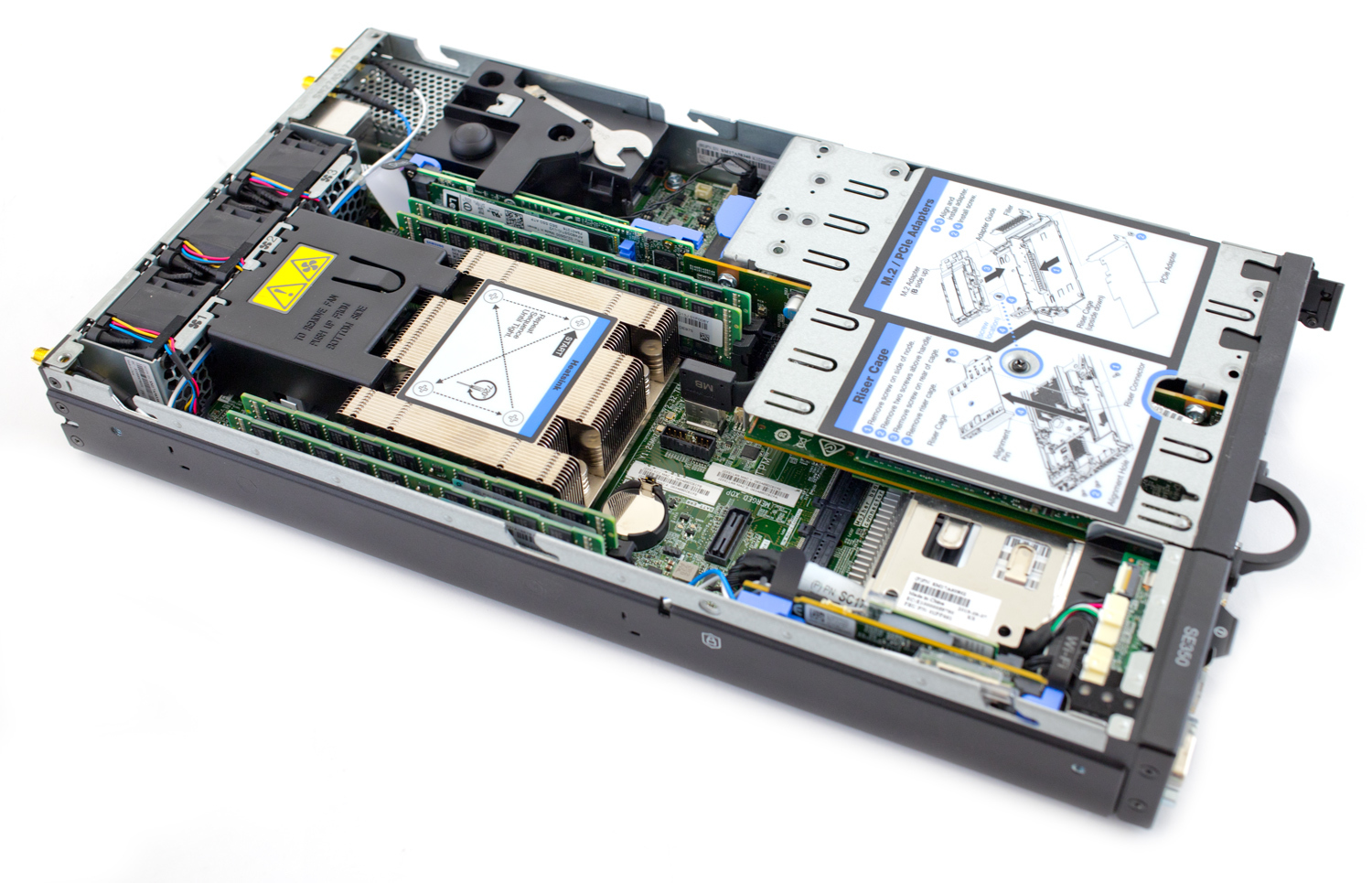 In this case, as one can see, we are using the right slot for an NVIDA GPU. 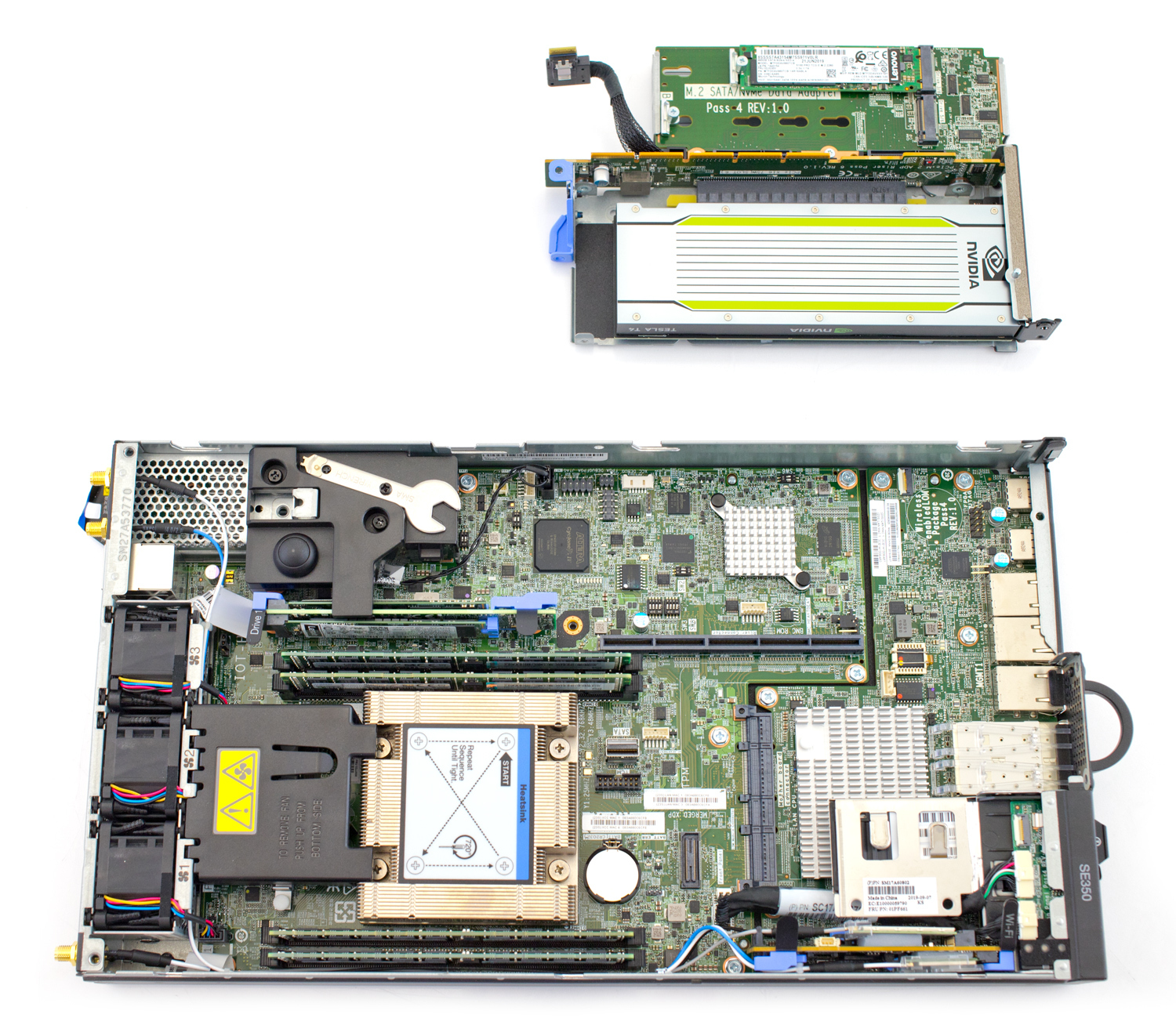 Managing the Lenovo ThinkSystem SE350 is done through the XClarity Controller, though there are several other management options. The XClarity Controller provides a clean and intuitive GUI for admins to easily navigate the system. The Home Tab gives users a quick glance at a heat summary, system information and setting, quick actions such as power and service options, power and system utilization, and remote console preview. 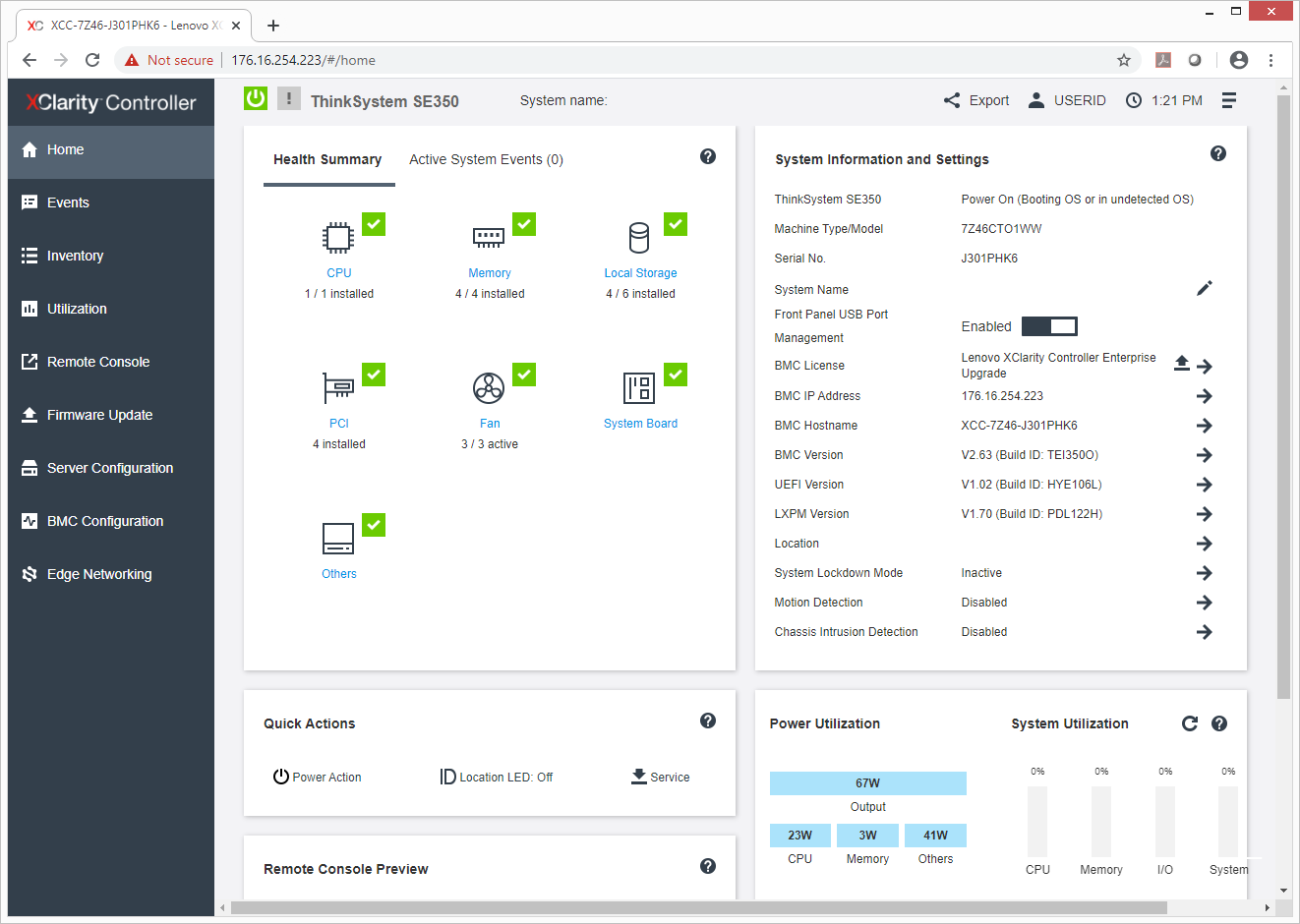 The Inventory Tab gives a breakdown of what hardware is being leveraged including CPU, DIMMs, Disk, Fans, PCI, SYS Board, Others, and SYS FW. 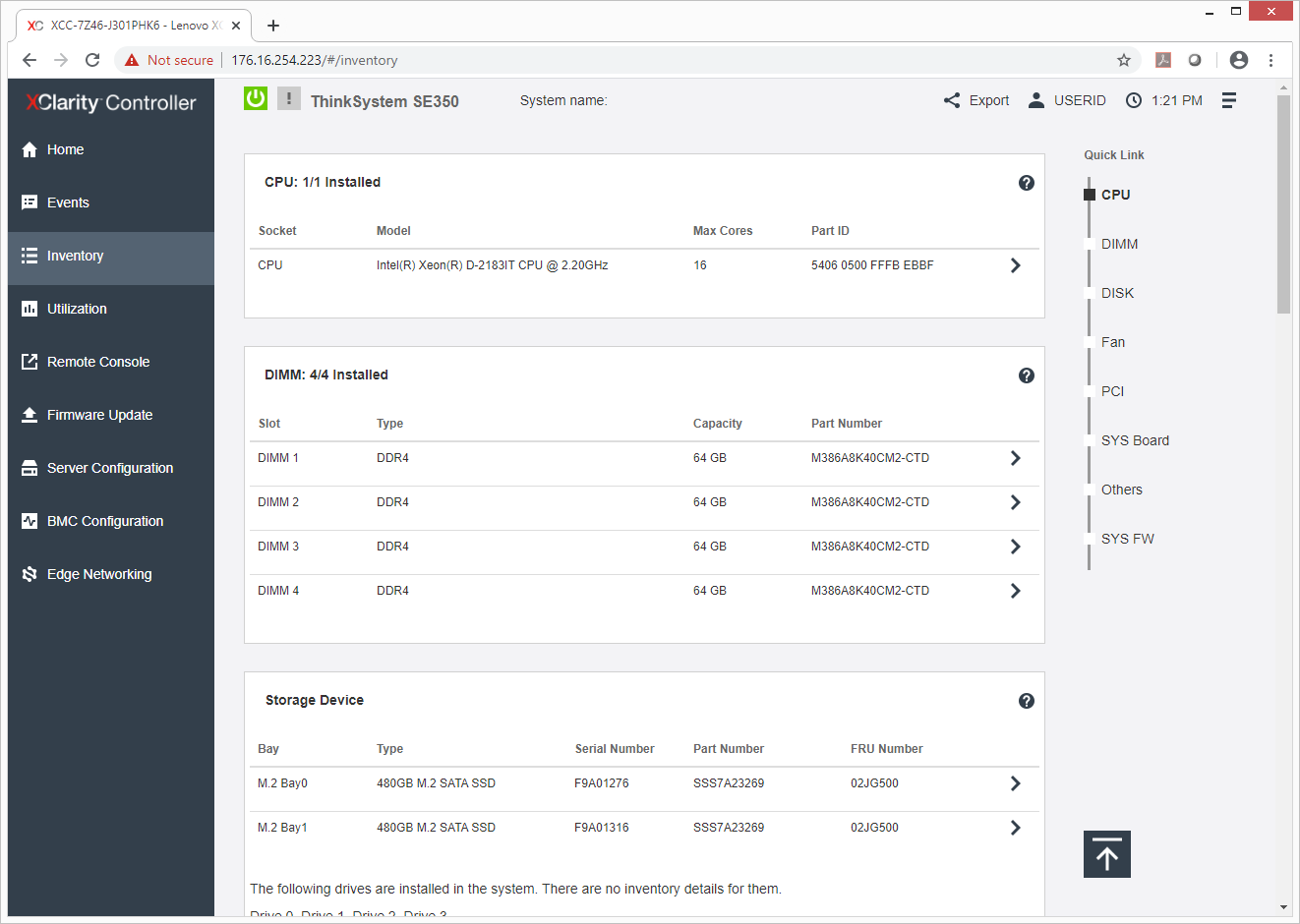 Utilization allows users to drill down a bit in either graphical or table view. Users get a quick look at how things are or how they have been running for a set period of time. 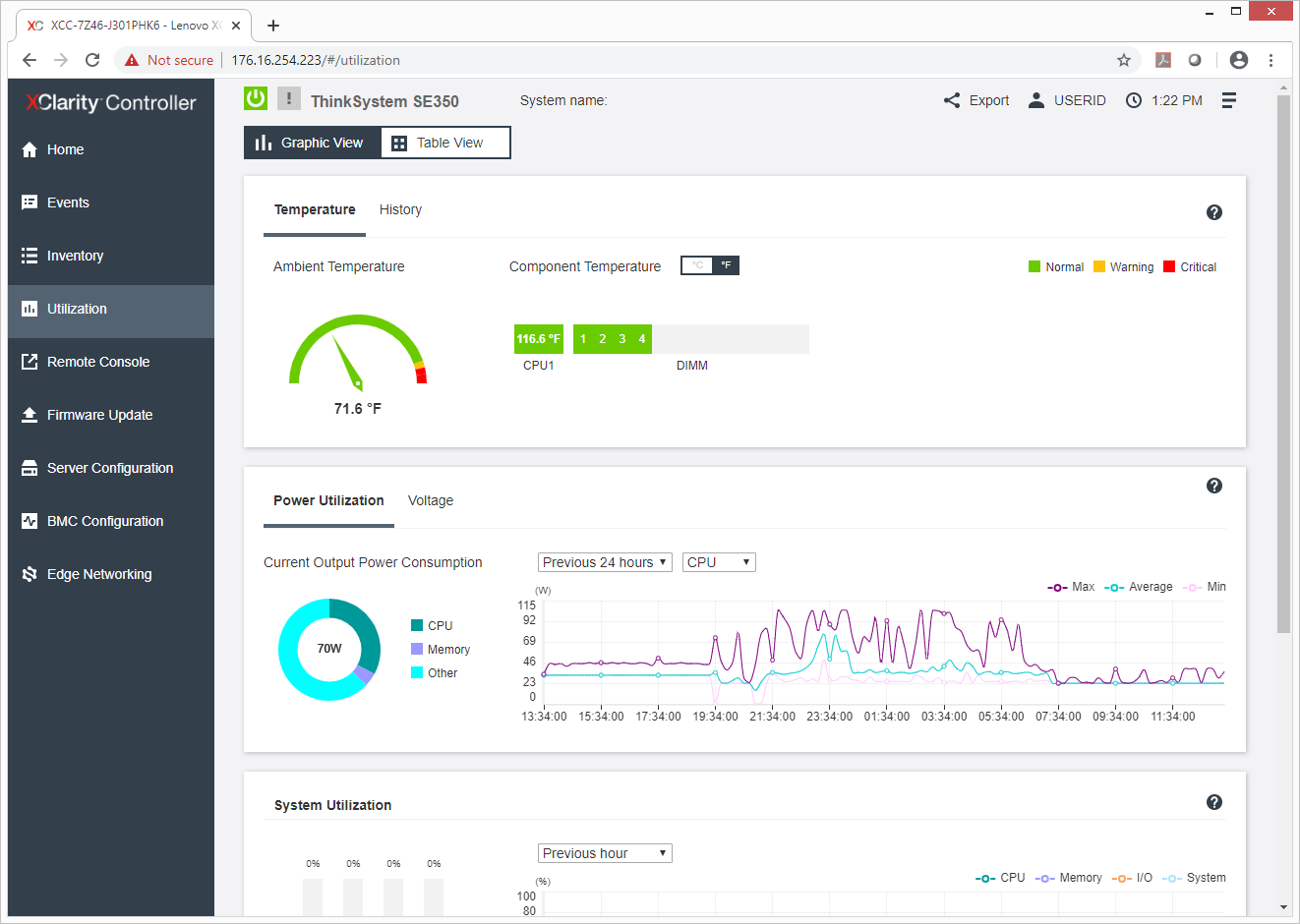 Remote Console is as one images. Here one can see a remote console preview, mount local media files, and see the total virtual media mounted. 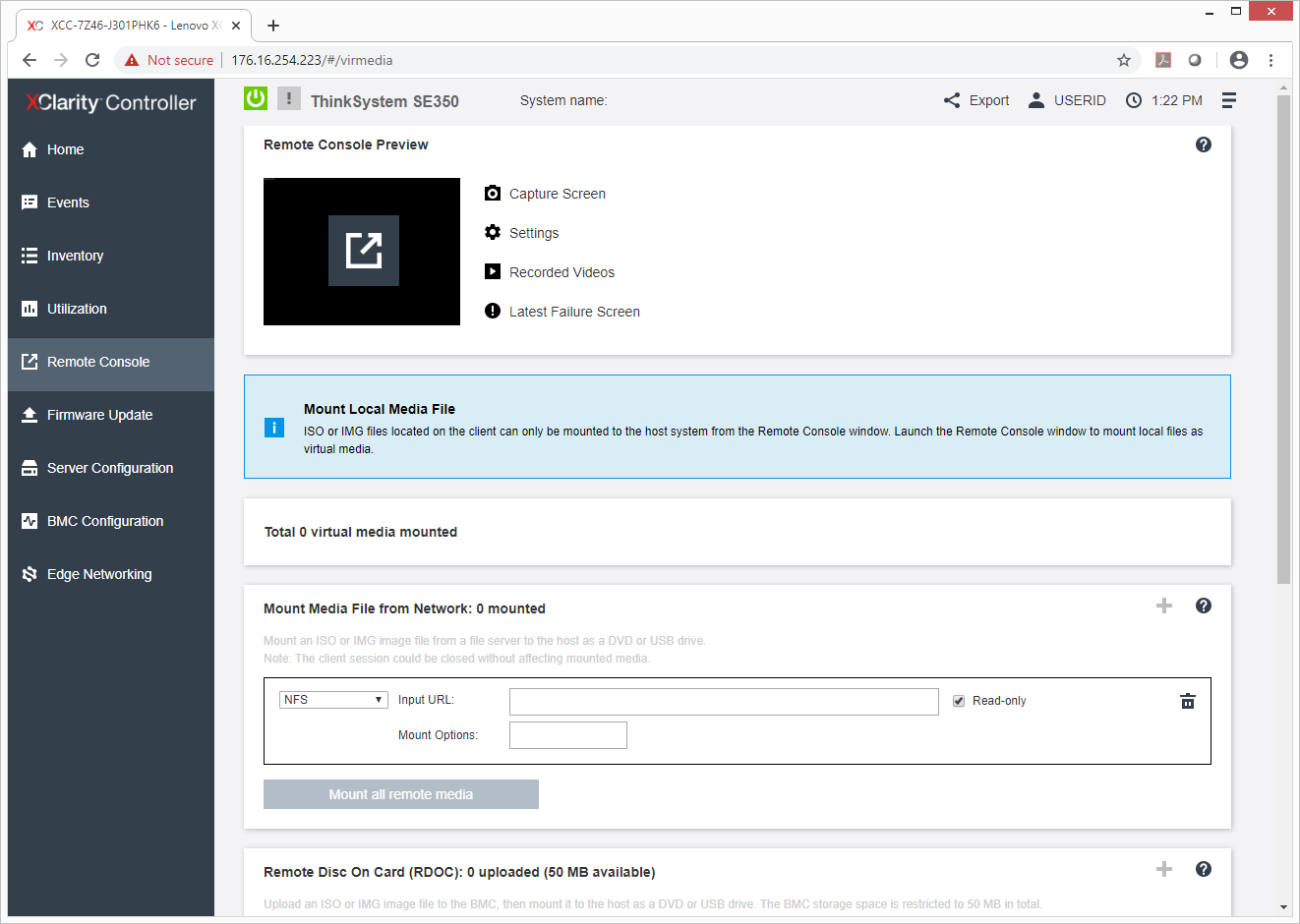 Edge Networking is a bit more specific to this server. Here users can see the network topology and change it if need be. 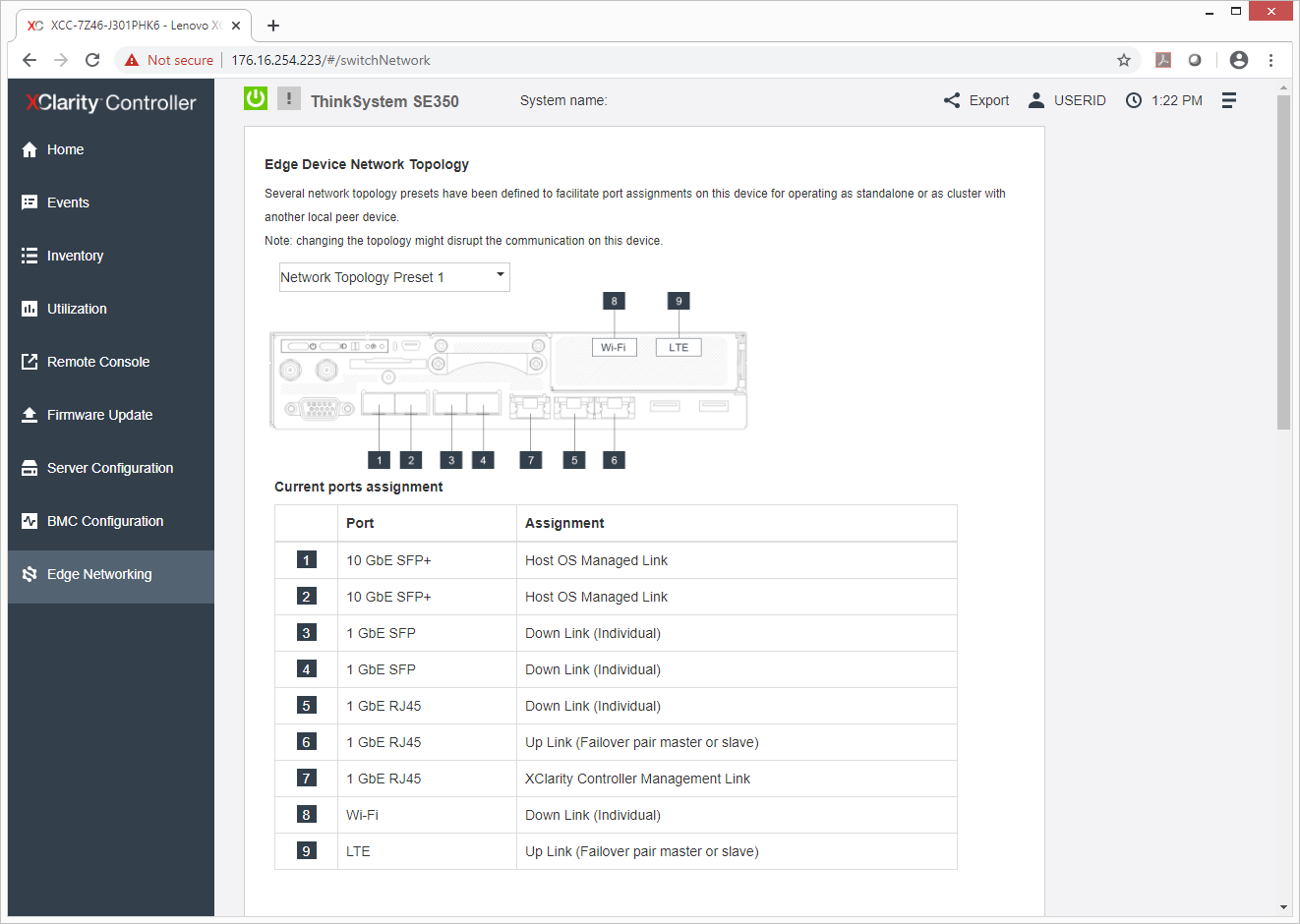 Each SQL Server VM is configured with two vDisks: 100GB volume for boot and a 500GB volume for the database and log files. From a system resource perspective, we configured each VM with 4 vCPUs, 64GB of DRAM and leveraged the LSI Logic SAS SCSI controller. While our Sysbench workloads tested previously saturated the platform in both storage I/O and capacity, the SQL test looks for latency performance.

For our transactional SQL Server benchmark, the Lenovo ThinkSystem SE350 had an aggregate transactional score of 12,641.9 TPS with individual VMs ranging from 3,160.1 to 3,160.9 TPS.

With SQL Server average latency we saw an aggregate of 2.25ms with individual VMs running from 2ms to 3ms.

Each Sysbench VM is configured with three vDisks: one for boot (~92GB), one with the pre-built database (~447GB), and the third for the database under test (270GB). From a system resource perspective, we configured each VM with 4 vCPUs, 60GB of DRAM and leveraged the LSI Logic SAS SCSI controller.

Sysbench average latency gave us an aggregate score of 22.78ms with individual VM ranging from 22.68ms to 22.82ms.

For our worst-case scenario latency (99th percentile) the server had an aggregate score of only 51.4ms with individual VMs running from 51.24ms to 51.56ms.

Up next is 64K sequential write. Here, the SE350 peaked at roughly 44K IOPS or 2.7GB/s at about 175µs latency before dropping off some.

Next, we switched over to our VDI clone test, Full and Linked. For VDI Full Clone (FC) Boot, the Lenovo ThinkSystem SE350 Server peaked at 202,634 IOPS with a latency of 167.5µs.

The next benchmark is the VDI FC Monday Login that gave us a peak performance of 94,657 IOPS and 160.7µs.

The edge needs the processing power of servers without the big footprint traditional servers demand, not to mention the environments are typically hostile to a most data center equipment. To address those needs Lenovo has come up with the Lenovo ThinkSystem SE350 Edge Server. Not as wide or as deep as a typical 1U server, the SE350 can be mounted in several ways at the edge. Built to withstand edge environments, the SE350 packs Intel Xeon D CPUs, up to 256GB of RAM, up to 16TB of NVMe storage, and oodles of connectivity, wired or wireless. The SE350 supports NVIDA Tesla T4 GPUs as well.

For performance we ran both our Application Workload Analysis as well as our VDbench workloads. Our Application Workload Analysis consists of SQL Server and Sysbench. For SQL Server the Lenovo ThinkSystem SE350 was able to hit aggregate scores of 12,641.9 TPS and an average latency of 2.25ms. For Sysbench we saw aggregate scores of 5,617.5 TPS, average latency of 22.78ms, and worst-case scenario latency of 51.4ms.

It is very interesting to see Lenovo take such a small device in a strong box and make it hit the numbers above. The Lenovo ThinkSystem SE350 allows users to hit data center numbers at the edge all for a good price point, in a package that can literally fit in a backpack. We can’t overstate how cool this server is as it’s hard in photos, and even the video, to convey the size, exquisite engineering and flexibility. Lenovo shipped this with a T4 GPU, but we can swap that our for 4 more NVMe M.2 SSDs – it even has 10GbE onboard so as not to take up precious PCIe expansion space. The SE350 is quite literally the most impressive server we’ve seen in ages, and maybe even all time, it’s just that good. Anyone who chooses to build one or a cluster of these for their edge use cases, will be thrilled with the outcome. We definitely are, and have awarded the Lenovo ThinkSystem SE350 an Editor’s Choice Award as a result.