The Lenovo 4U ThinkSystem SR950 is a built for the most resource-intensive and mission-critical workloads. This massive iron is considered one of the company’s flagship servers, focusing heavily on continuous operation and “always-on” reliability coupled with several levels of resiliency to protect data. This enterprise-class server is designed for those that need four or more processors, a ton of memory, and a range of I/O connections.

The Lenovo 4U ThinkSystem SR950 is a built for the most resource-intensive and mission-critical workloads. This massive iron is considered one of the company’s flagship servers, focusing heavily on continuous operation and “always-on” reliability coupled with several levels of resiliency to protect data. This enterprise-class server is designed for those that need four or more processors, a ton of memory, and a range of I/O connections.

The SR950 features up to eight second-generation Intel Xeon Processor Scalable family CPUs (with 28x cores per processor) and can be configured with up to 24x 2.5″ bays that can house SAS/SATA HDDs/SSDs, including 12x 2.5″ NVMe SSDs. The SR950 also can fit up to 24TB of RAM via 96 slots using 256GB DIMMs, which also support Intel Optane DC Persistent Memory. Servers can benefit from Optane DC Persistent Memory Modules (PMM) in a huge way, specifically real-world data center operations, as PMM’s come significantly higher capacities compared to traditional DRAM (128GB, 256GB and 512GB vs. 4GB to 32GB).

The SR950 also uses XClarity Administrator, Lenovo’s centralized agent-free, user-friendly resource management solution. This systems management software features a streamlined interface and is designed specifically to reduce complexity, improve system response, and enhance the availability of Lenovo solutions, such as the SR950. With XClarity, admins will be able to automate and scale infrastructure deployment, which will allow businesses to focus on other projects and use their resources in more important areas.

We also have a video walkthrough of the system:

The Lenovo ThinkSystem SR950 is easily one of the biggest servers we have ever reviewed. This thing looks like a beast siting in the StorageReview lab. That said, the SR950 is a rugged, quality-built device that is set to handle anything thrown at it, offering a ton of expansion options and performance.

The front panel is home to 12-23 2.5-inch drive bays (varies depending on your model), that are located along the top and bottom. Near the bottom right are the Power button, power LED, System-error LED, System ID button/LED, and the Network activity LED. 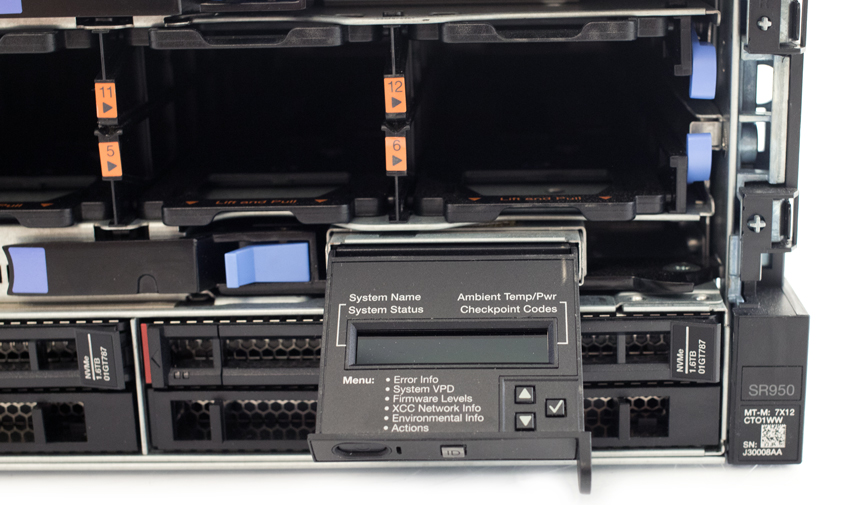 On the bottom left of the front panel are two USB 2.0 ports (one of which functions as a Lenovo XClarity Controller management port) and the VGA Video port. Turning the SR950 reveals the (up to) 17x PCIe slots, which are scattered around the back panel. The power supplies are located on the left side; users can add up to an addition three more for redundancy. Along the bottom of the back panel is the NMI button, XClarity Controller network connector (RJ45), Serial connector, two USB 3.0 ports, and a VGA video port.

Redundancy is also a major focus of the SR950. With the XClarity Controller, users can set up Ethernet connection failover capability: If the primary Ethernet connection goes unexpectedly goes offline, all Ethernet traffic will automatically switch to the optional redundant Ethernet connection without data loss or user intervention. Just be sure to install the specific device drivers are installed. 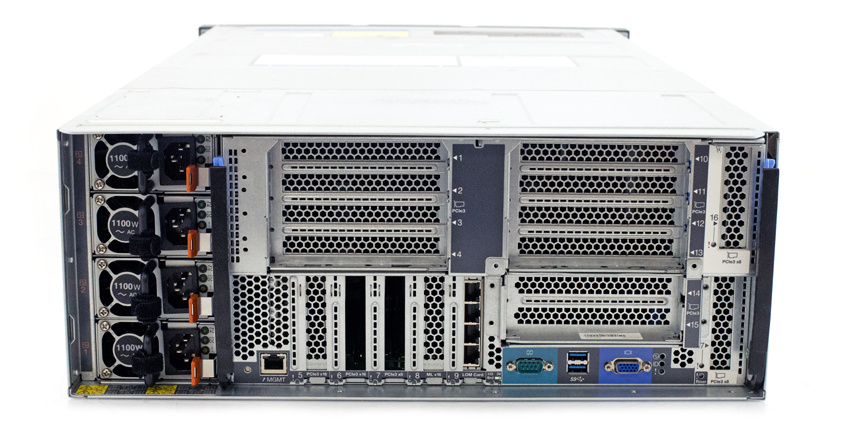 The SR950 also features redundant cooling and power capabilities (optional build and depending on your configuration). The Lenovo server supports up to four 1100-watt (110V or 220V ac), 1600-watt (220V ac), or 2000-watt (220V ac) hot-swap power supplies as well as 6 or 12 hot-swap fans. If one fails, the redundant cooling fan takes over. The fans themselves are easily removable from the front. 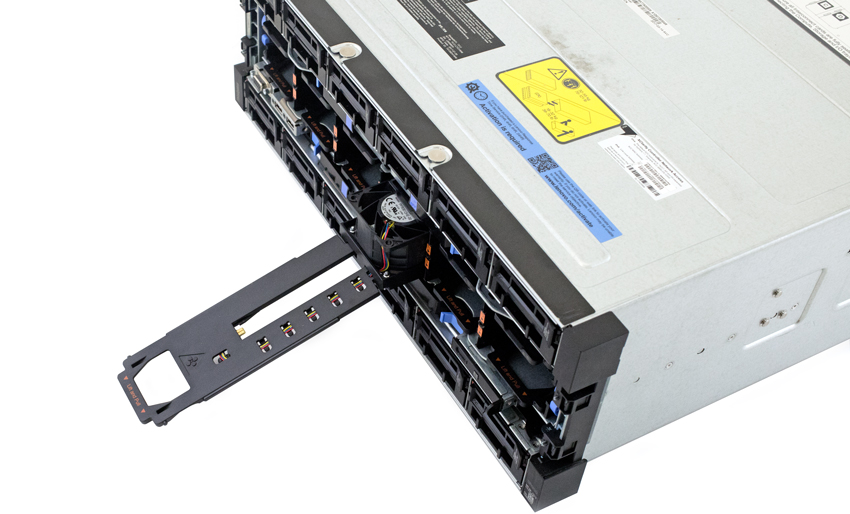 The front of the server has two easily removable sleds where users can access the CPUs and memory. Here is where a user can combine Intel Optane PMEM with the system’s RAM for an even bigger performance boost. 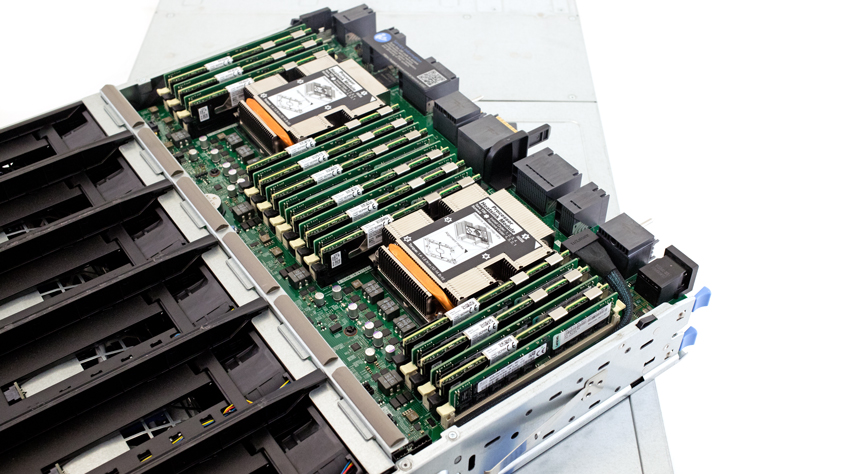 For our testing purposes, Lenovo configured our SR950 with the following components. On system memory our build includes 24 2666MHz DDR4 DIMMs (6 per CPU) for a total RAM footprint of 768GB. On the processing side our server includes 4 x 8280M CPUs, with each CPU has 28 cores clocked at 2.7GHz. In aggregate this gives us 302.4GHz of compute performance. On the storage side our system also includes an onboard SATA m.2 SSD for boot and 12 1.6TB Intel P4610 NVMe SSDs. For our SQL Server test we leveraged 4 SSDs for our 4 VM workload, while Sysbench stressed 8 and 12 SSDs for our 8 and 12 VM workloads. Our baremetal VDbench workload stressed all SSDs, showing aggregate storage performance.

With SQL Server average latency the SR950 gave us an aggregate score of 2ms with individual VMs all hitting 2ms.

Next, we switched over to our VDI Full clone and Linked clone tests. For VDI Full Clone (FC) Boot, the Lenovo recorded a peak performance of 1,039,601 IOPS at a latency of 350.1µs.

Lastly, with VDI LC Monday Login, the Lenovo server showed a peak performance of 328,937 IOPS at a latency of 446µs.

The Lenovo ThinkSystem SR950 is a massive 4U server designed specifically for enterprises who deal with resource-intensive and mission-critical workloads on a consistent basis. Powered by (up to) 8 second-generation Intel Xeon Platinum processors with (up to) 28x cores per processor, the Lenovo server supports up to a generous 24TB of TruDDR4 RAM via the available 96x 256GB DIMM slots, and supports Intel Optane DC Persistent Memory. The SR950 is equipped with 24 x 2.5″ bays that support SAS/SATA HDDs/SSDs, including 12 x 2.5″ NVMe SSDs. looking to add PCIe devices have the option of installing up 14 Up ((11) x16 and (3) x8), 2x shared ML2 and PCIe x16) as well as two front dedicated-RAID slots. 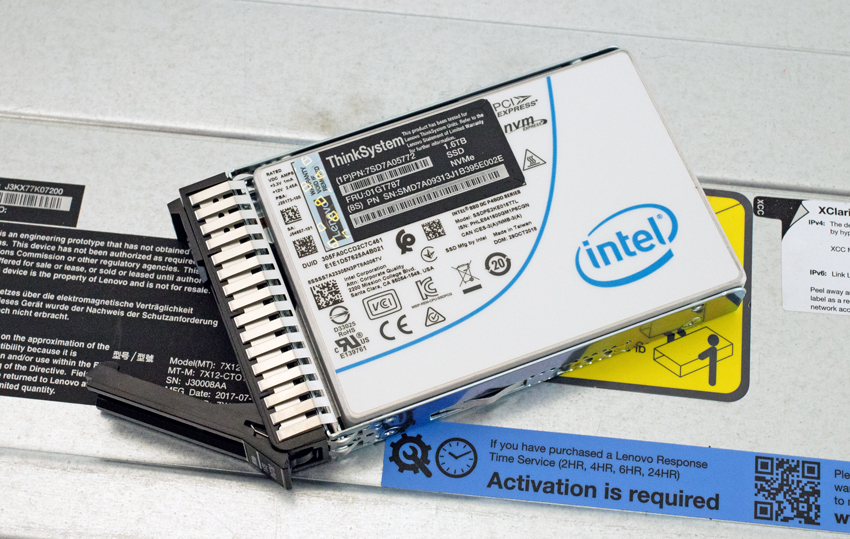 The Lenovo ThinkSystem SR950 is a behemoth of a server that can be outfitted with up to 8 Intel Xeon CPUs and up to 24TB of memory with the inclusion of Intel Optane PMEM. Through our setup and testing the server lived up the expectations we had. This server is definitely not for everyone, it’s an aircraft carrier where as some users only need a dingy. The SR950 is perfect however for the current and emerging suite of AI/ML and other workloads that can take full advantage of the incredible compute horsepower available in just 4 rack units of space.