The Micron M500 is part of the new SSD family created by Micron and Crucial geared toward personal storage applications with the Micron M500 slotted as an enterprise-class SSD that ranges in capacities up to a robust 960GB, uses 20nm MLC NAND, a Marvell controller, interfaces over SATA 6Gb/s, and features a slim 7mm drive height. The Micron-branded M500 is also targeted at Cloud and Web 2.0 segment. As we mention in our review of the near-identical consumer-oriented Crucial M500, the Micron brand is established and is known for its long-term reliability and its compatibility. Adding to that is the robust capacity and value offered by Micron. On that note, while Crucial’s M500 offers top capacity in the consumer-market, there are existing enterprise SSDs that meet and exceed 1TB. Yet, what Micron brings to the table is affordability. While other drives might range up to $4,000, the Micron M500 960GB comes in low at less than a quarter of the price.

The Micron M500 is part of the new SSD family created by Micron and Crucial geared toward personal storage applications with the Micron M500 slotted as an enterprise-class SSD that ranges in capacities up to a robust 960GB, uses 20nm MLC NAND, a Marvell controller, interfaces over SATA 6Gb/s, and features a slim 7mm drive height. The Micron-branded M500 is also targeted at Cloud and Web 2.0 segment. As we mention in our review of the near-identical consumer-oriented Crucial M500, the Micron brand is established and is known for its long-term reliability and its compatibility. Adding to that is the robust capacity and value offered by Micron. On that note, while Crucial’s M500 offers top capacity in the consumer-market, there are existing enterprise SSDs that meet and exceed 1TB. Yet, what Micron brings to the table is affordability. While other drives might range up to $4,000, the Micron M500 960GB comes in low at less than a quarter of the price. 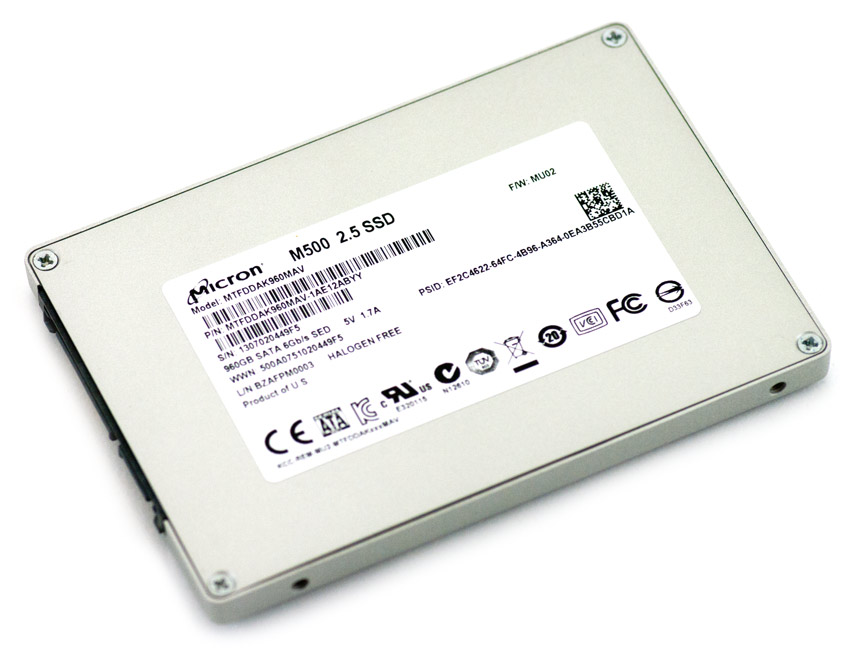 One last note is that while the Crucial M500 and the Micron M500 are nearly identical, the Crucial M500 has a different job to perform than the Micron M500. Crucial’s model hits the market designed to offer robust capacity for consumers in an SSD form factor for performance. The Micron M500 enables those same benefits for OEM laptop builders and is drawing interest from enterprise users who utilize lots of read-intensive applications. Micron suspects the Micron M500 will be used in lots of Cloud computing use cases as well.

Micron doesn’t release OEM pricing, however, having seen the Crucial M500 pricing, it’s a fair guess that the Micron drives will be aggressively priced. Micron M500 drives will come with a three year warranty.

As the Micron M500 enterprise model and Crucial M500 consumer model have essentially the same design, users can reference the Crucial M500 review for design features and disassembly.

All SAS/SATA enterprise SSDs are benchmarked on our second-generation enterprise testing platform based on a Lenovo ThinkServer RD630. This new Linux-based testing platform includes the latest interconnect hardware such as the LSI 9207-8i HBA as well as I/O scheduling optimizations geared towards best-case flash performance. For synthetic benchmarks, we utilize FIO version 2.0.10 for Linux and version 2.0.12.2 for Windows.

Flash performance varies throughout the preconditioning phase of each storage device. Our enterprise storage benchmark process begins with an analysis of the way the drive performs during a thorough preconditioning phase. Each of the comparable drives are secure erased using the vendor’s tools, preconditioned into steady-state with the same workload the device will be tested with under a heavy load of 16 threads with an outstanding queue of 16 per thread, and then tested in set intervals in multiple thread/queue depth profiles to show performance under light and heavy usage. 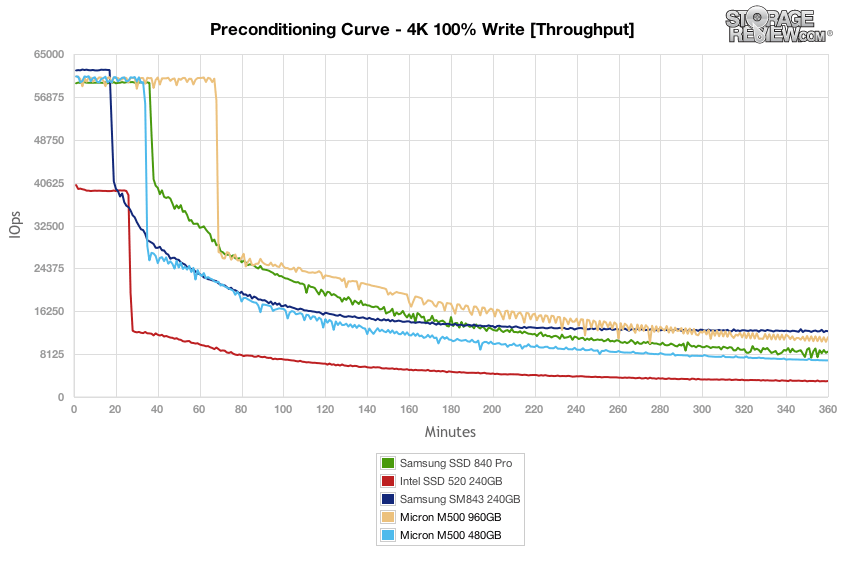 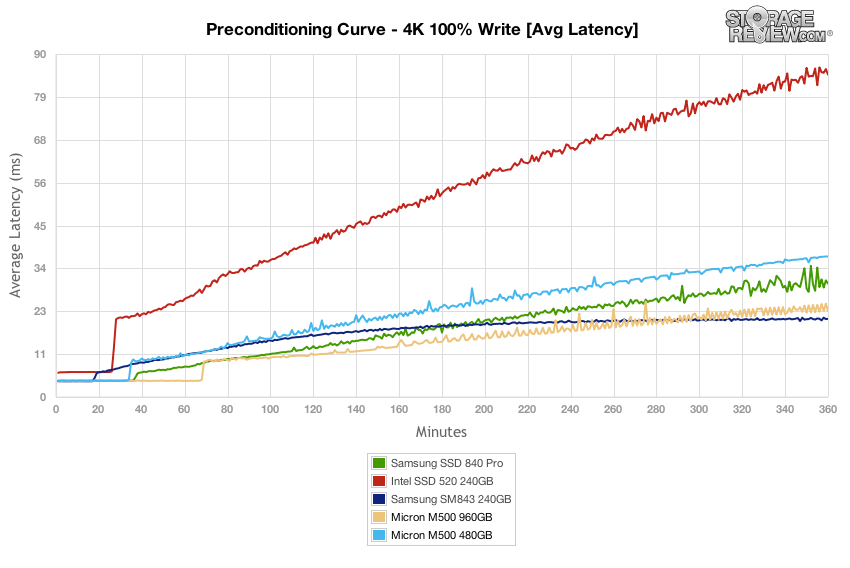 Comparing max latency between each SSD, the Micron M500 960GB had max response times ranging between 300-400ms in steady-state. 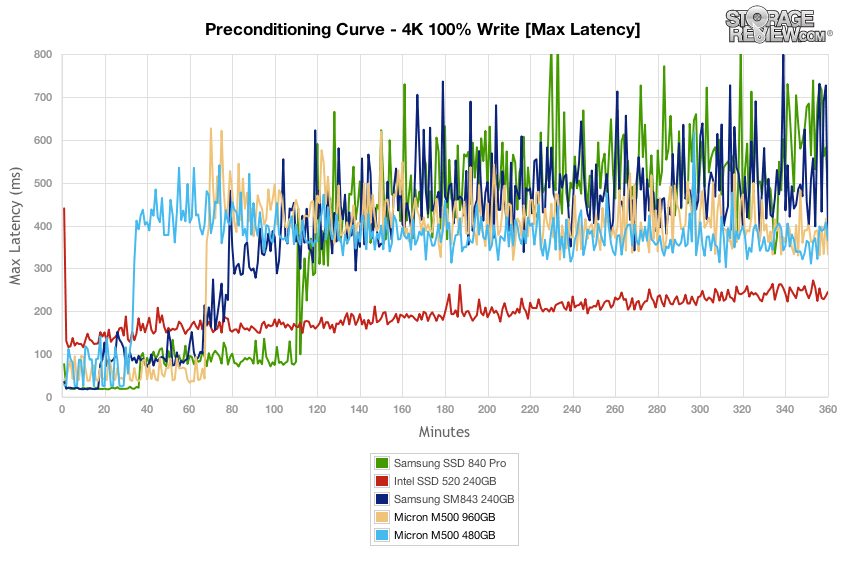 Looking even closer at the latency consistency in our 4k random write workload, the Micron M500 960GB lodged within the middle of the pack. 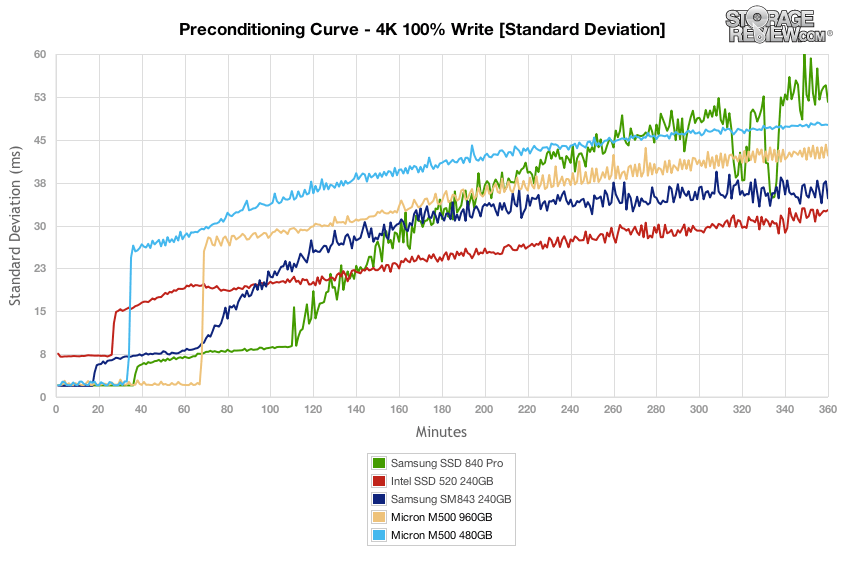 After 6 hours of preconditioning, the Micron M500 960GB offered the second lowest 4K random read performance, beating out the M500 480GB. However, its write speed came in strongly at around 10,200 IOPS, only being beaten out by the SM843.

With a heavy load of 16T/16Q, the Micron M500 drives offered more read latency than the others in the group we compared. However, write latency was more middle of the pack with the M500 960GB at 24.91ms.

As we look at max latency in our 4k test, the Micron M500s were edged out again by the Samsung drives in read activity with the 960GB model measuring 33.9ms peak. M500 write activity was stronger falling in the middle of the pack at 438.8ms.

The Micron M500 read latency standard deviation was higher by comparison, but the writes edged out the 840 Pro.

In our first mixed workload using an 8K profile 70/30% read/write spread and a constant 16T/16Q load, we measured a peak rate of 37,500 IOPS from the M500 960GB before it hit clas-leading steady-state speeds of 17,000 IOPS. As indicated on the chart, one of the benefits of such a large device is it stays in our near “burst” mode for quite a long time, in this case almost three hours for the 960GB model. 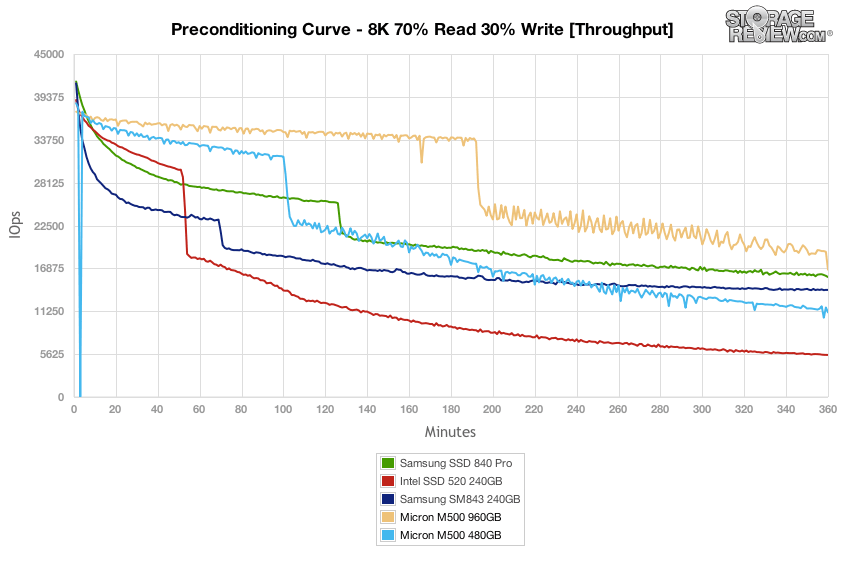 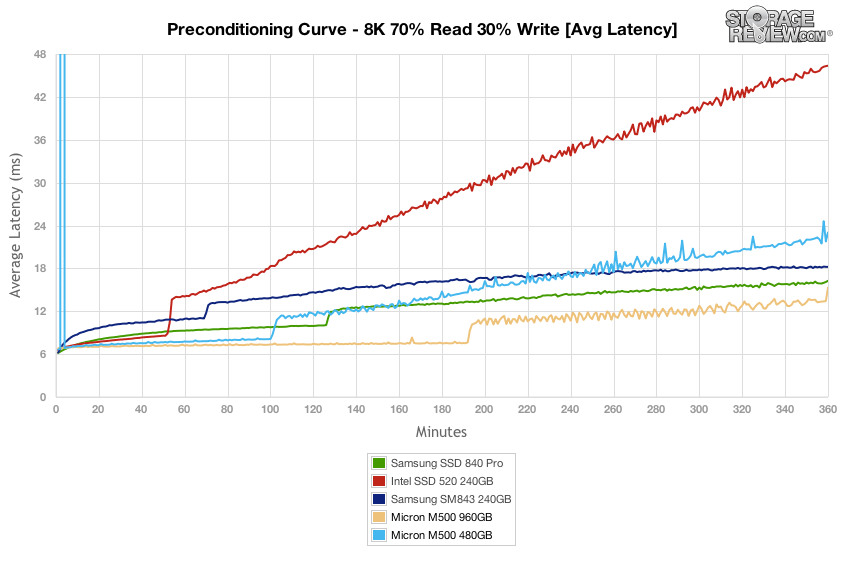 In the max latency section of our 8k 70/30 preconditioning test, the M500 performed at the bottom of group, measuring between 230-270ms in steady-state. Early in the test the 480GB model had a large peak response time that leveled off for the duration. 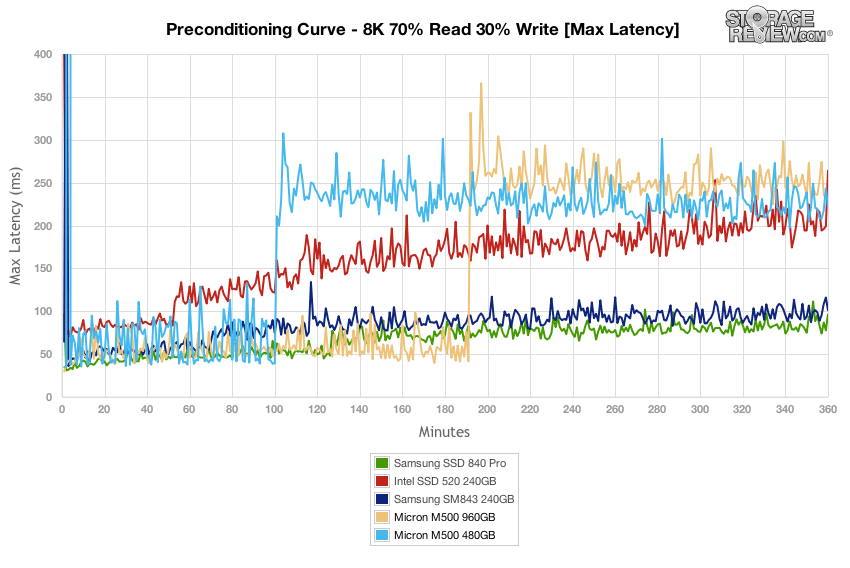 As the M500 960GB hit steady-state, it tested middle of the pack, bested again by the Samsung drives. 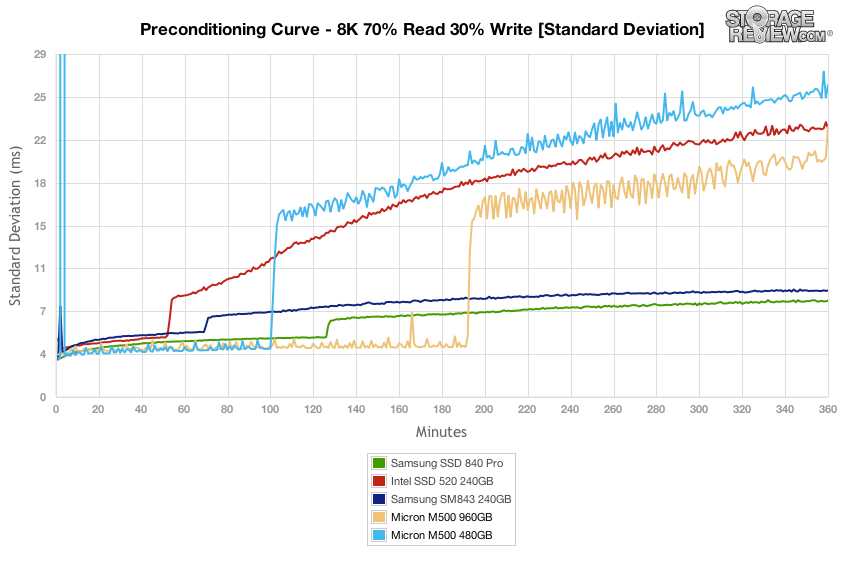 Compared to the fixed 16 thread 16 queue max workload we performed in the 100% 4K write test, our mixed workload profiles scale the performance across a wide range of thread/queue combinations. In these tests we span workload intensity from 2 threads and 2 queue up to 16 threads and 16 queue. In the expanded 8K 70/30 test, the Micron M500 960GB scaled from 7,111 IOPS at 2T/2Q to the strongest in group peak at 18,105 IOPS at 16T/16Q. 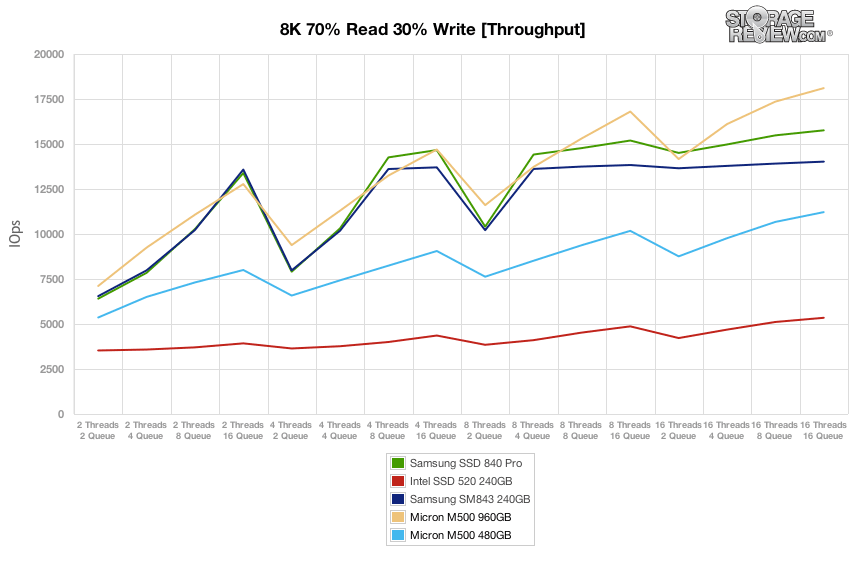 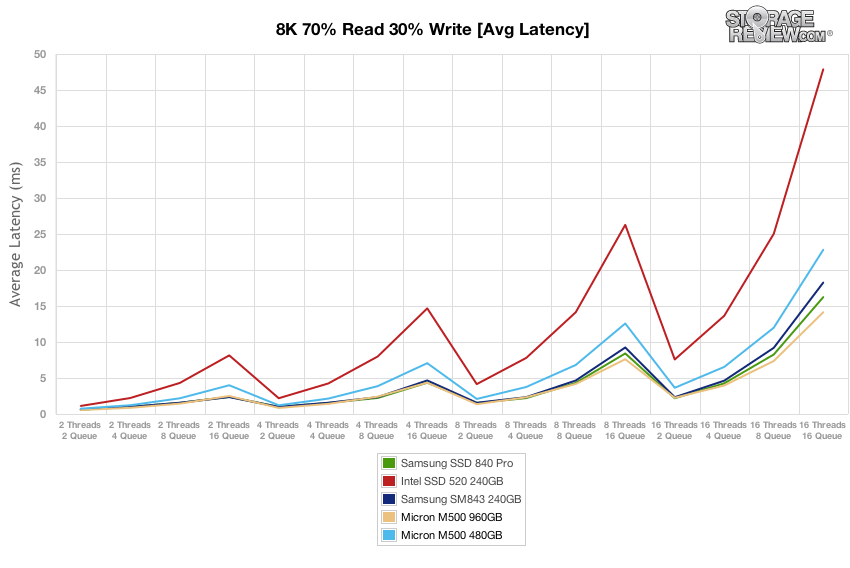 Max latency stayed middle of the pack for most of the queue depths, though the M500 spiked drastically at 16T/16Q. 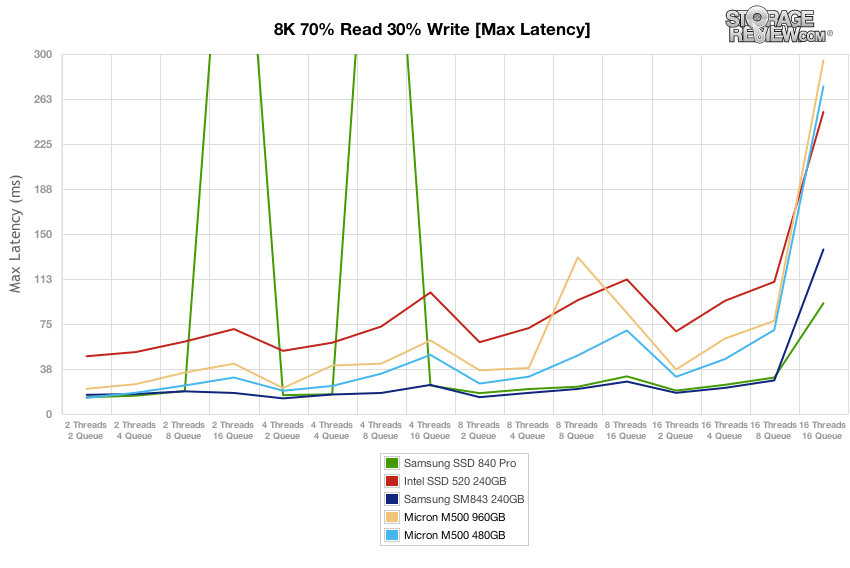 Comparing latency consistency in our 8k 70/30 test, the Micron M500 960GB hung tight with the Intel, but the Samsung drives edged out the Micron drives. 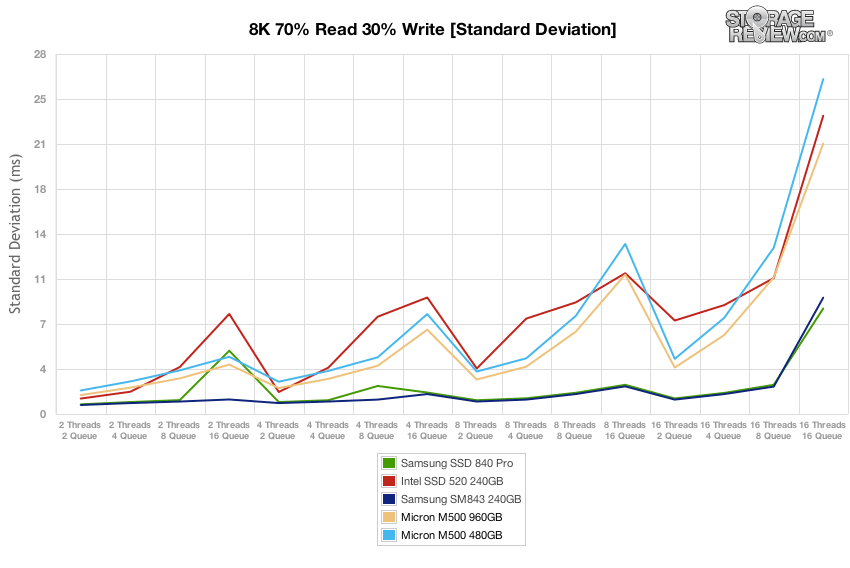 The next workload is our File Server profile, which covers a wide range of transfer sizes spanning from 512b to 512K. With a heavy 16T/16Q saturation load, the Micron M500 960GB offered peak transfer speeds measuring 25,000 IOPS before tapering off to a steady-state speed near 11,000 IOPS, placing it in the upper-middle section. 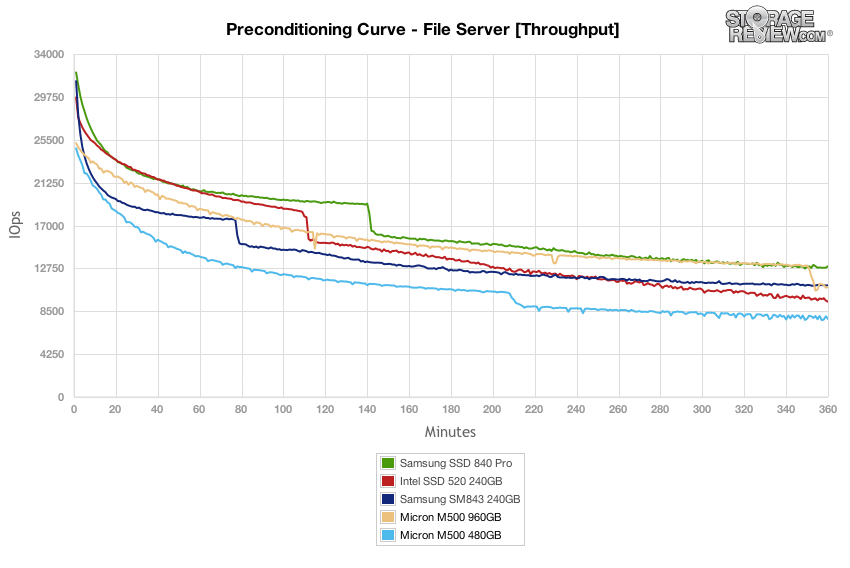 Average latency from the M500 960GB in our File Server preconditioning test measured 10ms in burst, before increasing to 23ms in steady-state. 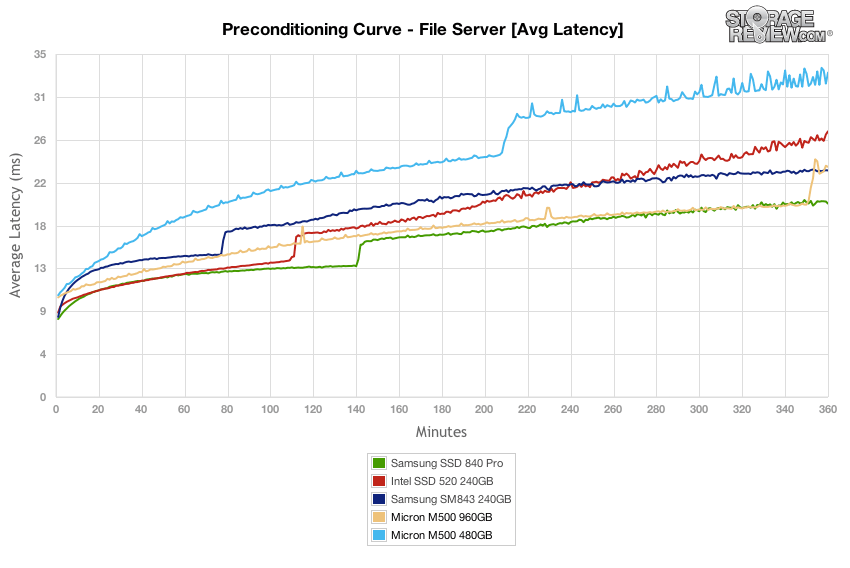 As the Micron M500 960GB neared steady-state in our File Server preconditioning test, max latency ranged from 80 to 130ms in burst, and then spiked to the upper 300ms range nearing steady-state. 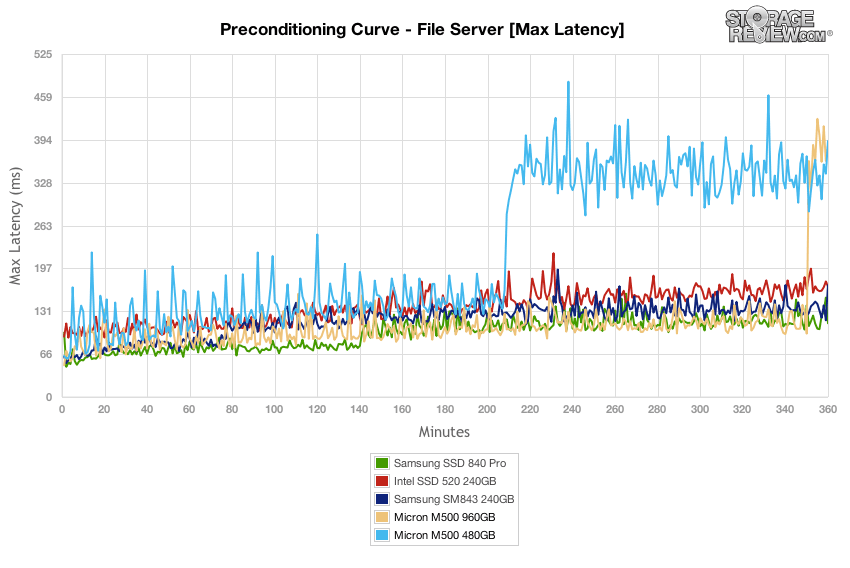 Switching focus to latency consistency in our File Server preconditioning test, the M500 960GB tested near the middle of the pack in burst mode, behind the SSD 840 Pro, and then slipped to the back of the pack with the smaller capacity as it neared steady-state. 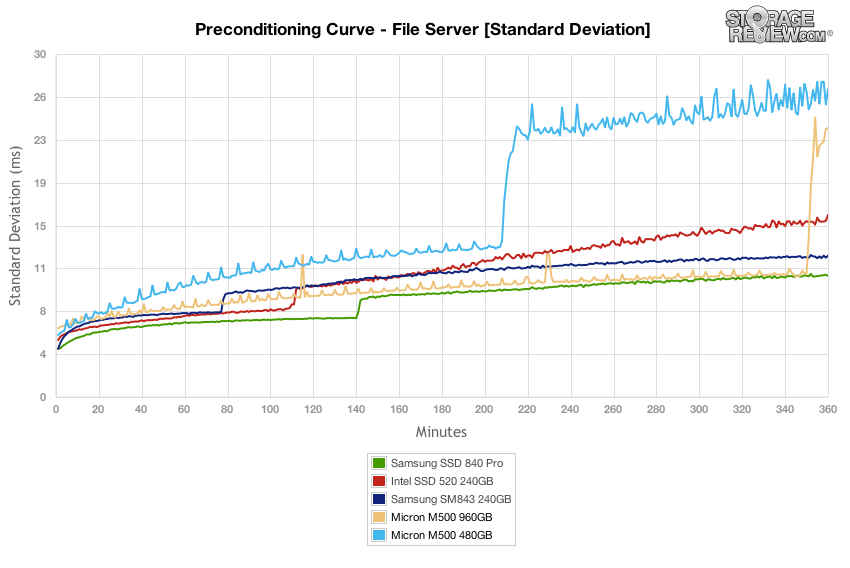 After our 6-hour File Server preconditioning process had finished on each SATA SSD, we transitioned to varied workloads where we scale between 2T/2Q up to 16T/16Q. The M500 960GB ranked towards the upper end of the group scaling from 5,818 IOPS at 2T/2Q and peaking at 10,998 IOPS at 16T/16Q. 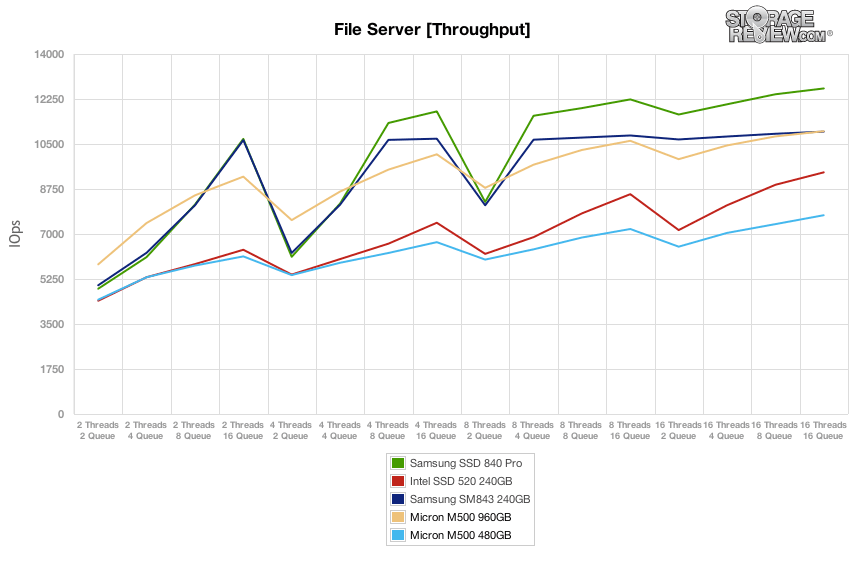 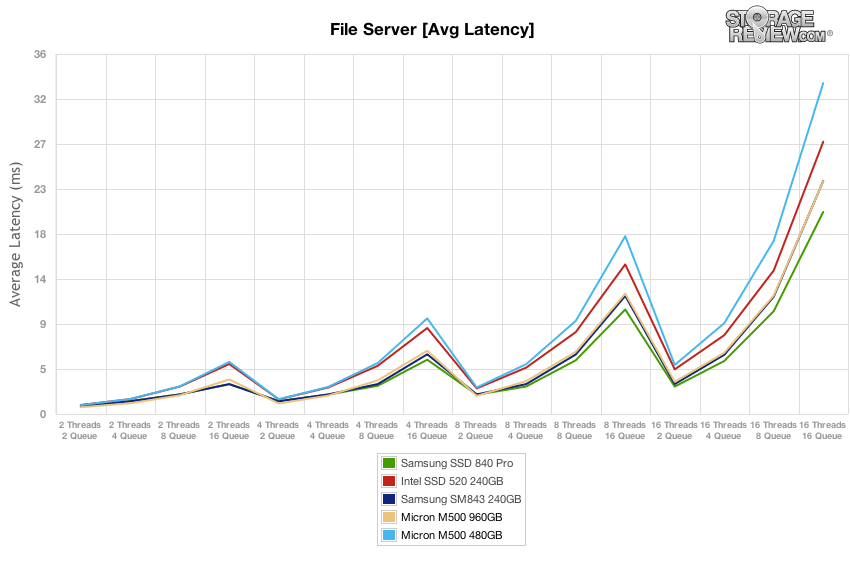 In our File Server test, the Micron M500 960GB had response times that were a little higher than comparables across the scaling workloads, ranging around 45ms up until 16T/16Q where it peaked at 419ms. 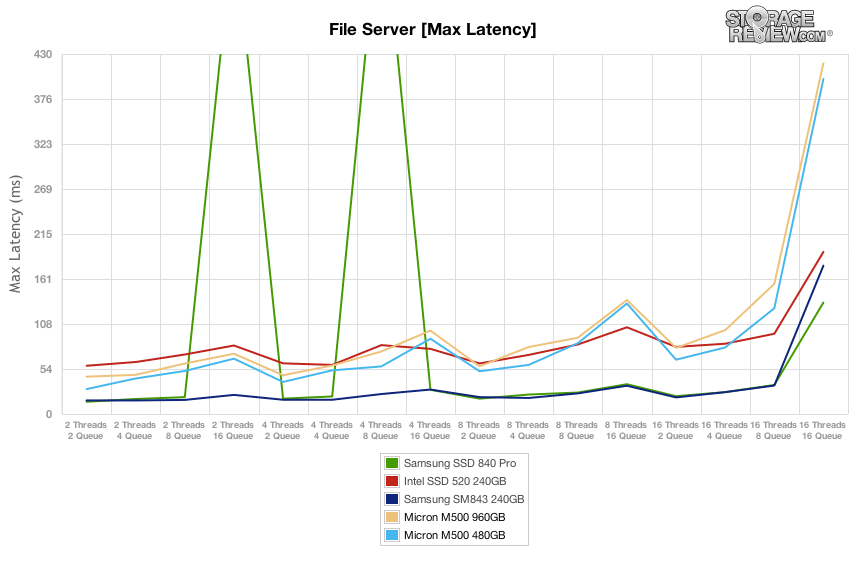 Comparing latency consistency, the M500 drives were both at the bottom of the pack across most areas. 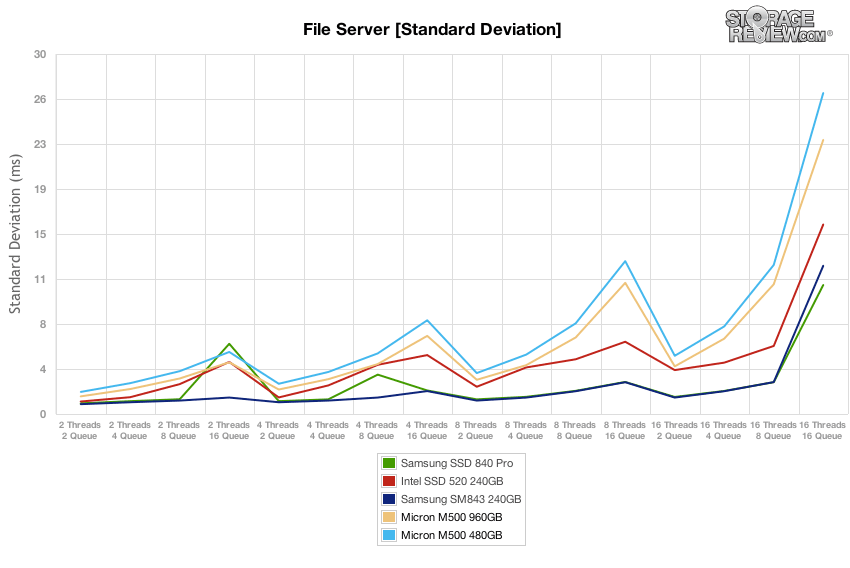 Our final preconditioning workload takes the traditional 100% read activity Web Server test and flips it to 100% write to precondition each SSD. This is our most aggressive workload, although it doesn’t really match any real-world conditions with 100% write. In this section, the Micron M500 960GB should be at a disadvantage as it is geared more toward read-specific applications. It did offer low burst speeds compared to the group, yet as it arrived at steady-state, it was the fastest along with the SM843. 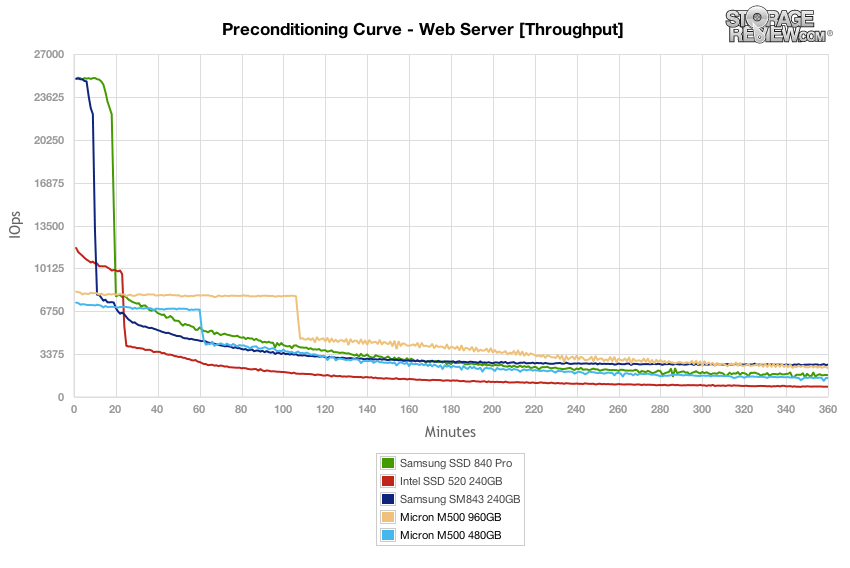 Average latency in our Web Server preconditioning test leveled off around 110ms as the drive neared steady-state, staying lower than all competitors for the duration of most of the test, and getting beat out at the end by the SM843. 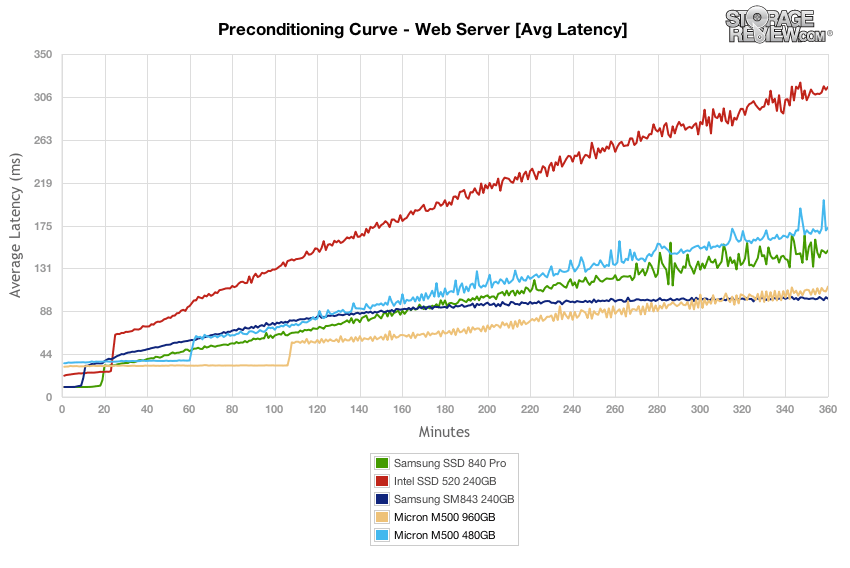 Max latency from the Micron M500 960GB in our stressful 100% write Web Server preconditioning run ranged from 1,200 to about 1,800ms as it neared steady-state, which was higher than the other client SSDs. 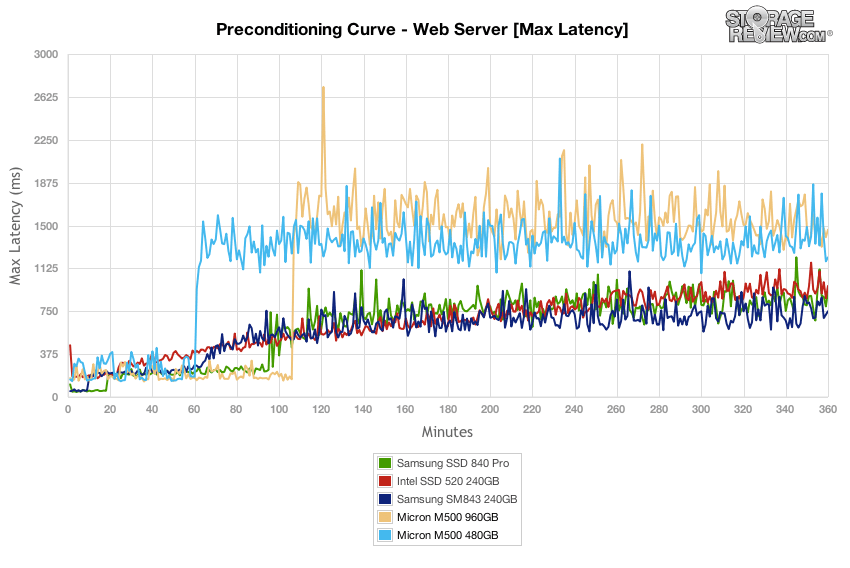 Comparing latency standard deviation in our Web Server preconditioning test, the Micron M500 drives performed at the bottom of the pack. 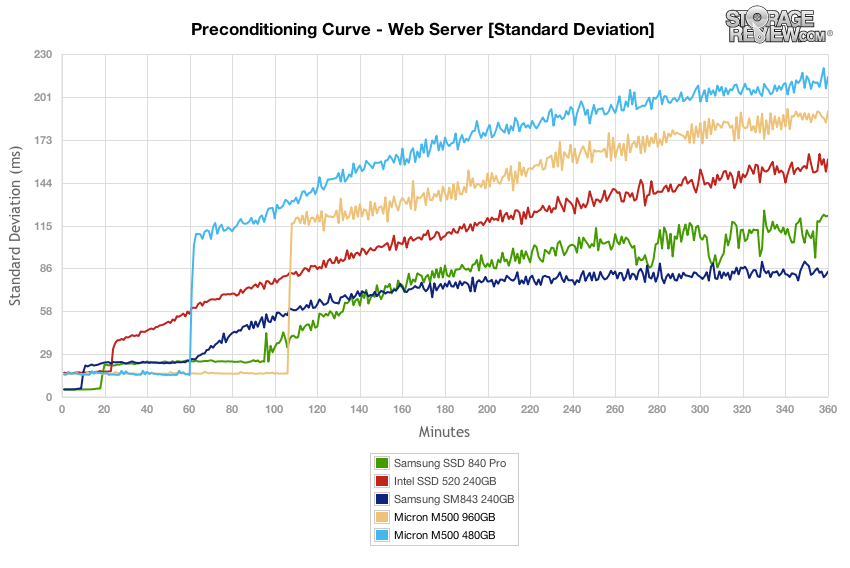 After each SSD finished our preconditioning stage in the Web Server test, we flipped the workload back to 100% read. In read-only conditions the Micron M500 960GB had performance scaling from 6,116 IOPS at 2T/2Q to 10,256 IOPS at 16T/16Q. This put it behind the competition including the SandForce-based Intel SSD 520. 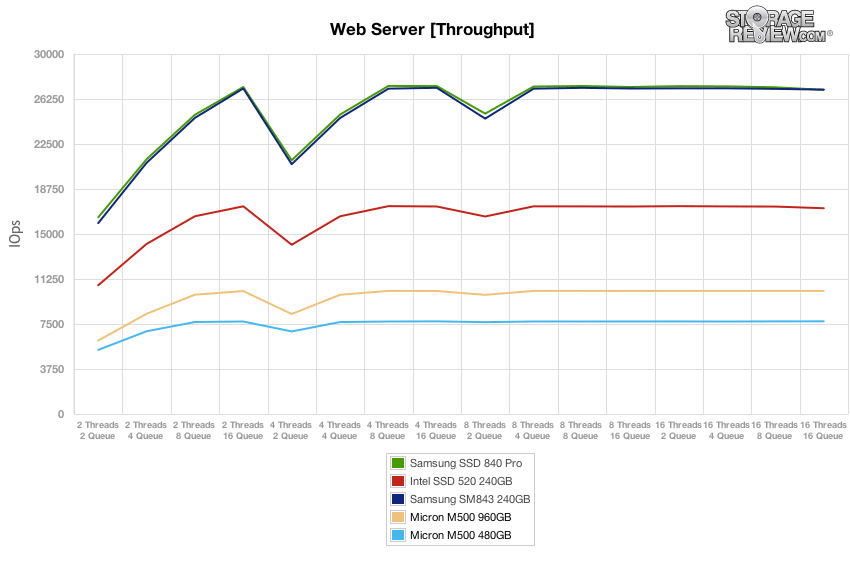 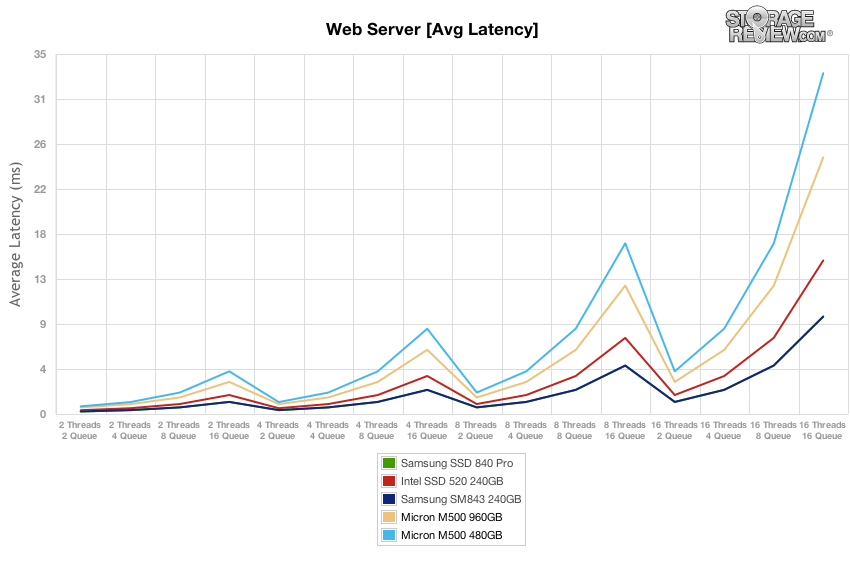 Comparing max latency in our Web Server test, the Micron M500 960GB had maximum latency measuring around 12ms, although it did spike to 157ms at 16T/16Q where the Samsung SSDs were able to keep their peak response times lower. 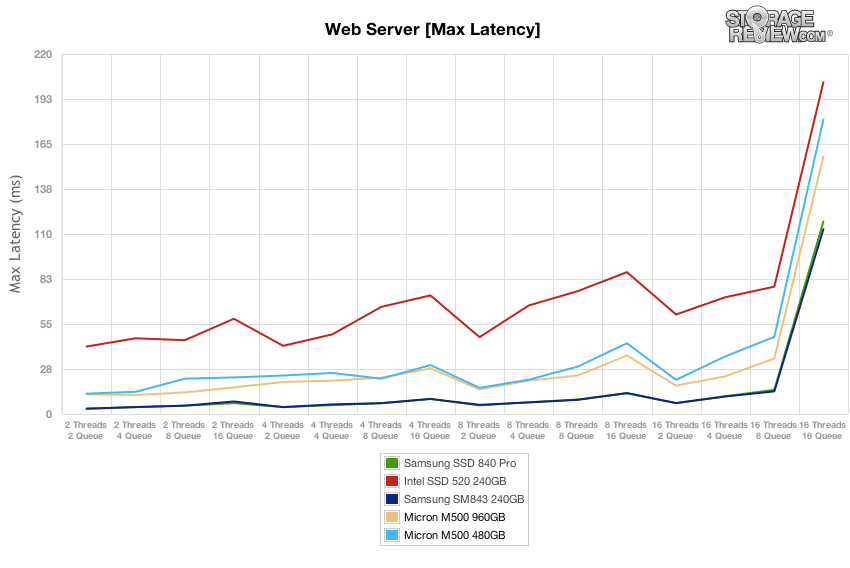 Comparing latency standard deviation in our Web Server test, the Micron drives fell into the bottom of the pack with a larger spread as effective queue depth increased. 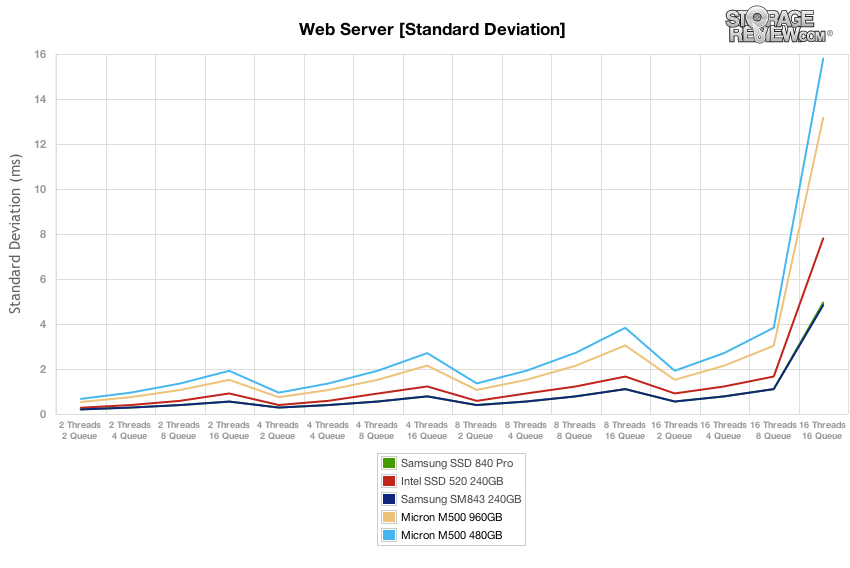 The Micron M500 is a client and light-enterprise SSD that ranges up to 960GB in capacity, uses 20nm MLC NAND, features a Marvell controller and is extremely slim with a 7mm drive height. It will appeal to enterprise customers who have lots of read-intensive workloads, such as cloud storage services or server and workstation boot drives. It is also likely to come in at a super-low price point compared to other near-terabyte and higher enterprise SSD models, making it an attractive option for performance-intensive, capacity-demanding applications. While 1TB+ enterprise models do exist, they cost substantially more than the what we expect the 960GB M500 to run.

Businesses who opt for the Micron will get the hardware features listed above, as well as Micron firmware – all of which will instill a sense of security. This plus cost and capacity are the motivating features. Meanwhile, in each performance test category the Micron M500 typically scored in the middle of the pack or higher. So, while Micron has room for improvement in performance, that’s not their primary target. They designed the M500 as a high capacity SSD that meets a range of budgets, and the Micron M500 does well to hold its own and then some. Compared to its closest light-enterprise competitor, the Samsung SM843, it offered better low queue depth performance in our 8k 70/30 and File Server workloads, but fell behind in read-intensive areas.

For Micron, the M500 SSD is more about a price and density push than it is a performance one. The M500 doesn’t top the charts in all areas, but where it matters most with capacity, it doubles down in an area where competitors top out at 480-512GB.

For enterprise buyers looking for economical, high-performance SSD, the Micron M500 is a compelling option that has no equal to its 960GB capacity.