While generally not considered part of the storage ecosystem, networking gear plays a key role in transporting data from device to device. In this case we’re taking a look at Netgear’s latest high-performance router offering, the N900 (WNDR4500). The N900 offers all the wired and wireless standards, including 802.11 b/g/n on the 2.4 GHz spectrum and 802.11 a/n on the 5.0 GHz spectrum, which incidentally has had its range increased this time around. It also offers features like wireless printer sharing, and ReadyShare USB storage access, which can deliver HD video streams to wired or wireless media streamers around the house.

While generally not considered part of the storage ecosystem, networking gear plays a key role in transporting data from device to device. In this case we’re taking a look at Netgear’s latest high-performance router offering, the N900 (WNDR4500). The N900 offers all the wired and wireless standards, including 802.11 b/g/n on the 2.4 GHz spectrum and 802.11 a/n on the 5.0 GHz spectrum, which incidentally has had its range increased this time around. It also offers features like wireless printer sharing, and ReadyShare USB storage access, which can deliver HD video streams to wired or wireless media streamers around the house.

Netgear’s pedigree in wireless networking is well known, and a proper in-depth review of the ins and outs of their routing and wireless range is beyond the scope of this review, we’ll leave others to that task. Our objective with the N900 is to help users better understand the role the router can play in the home and office, and the value the direct attached USB storage access offers. 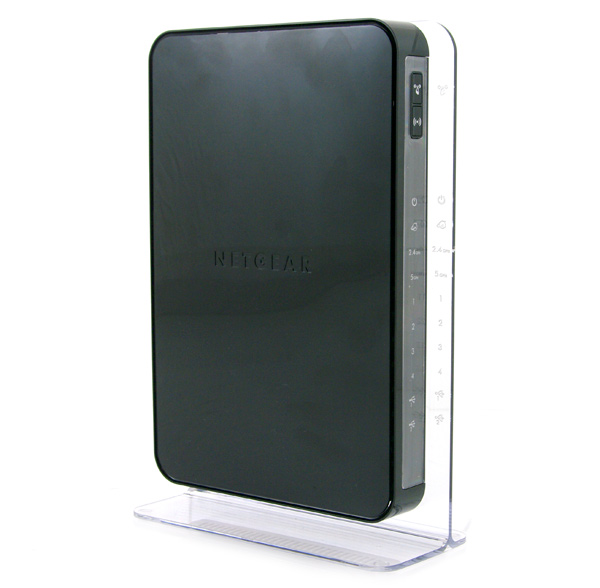 With most of our Netgear product reviews revolving around home office or business-grade NAS equipment, it was a refreshing change to see an aseptically-friendly product come down the line. The N900 router sits on top of a Plexiglas base, with a semi-transparent design offering a mix of clear and black plastic. No matter if the router needs to be presented from and center on a home media shelf or hidden behind the scenes, the Netgear N900 is already designed to fit in. 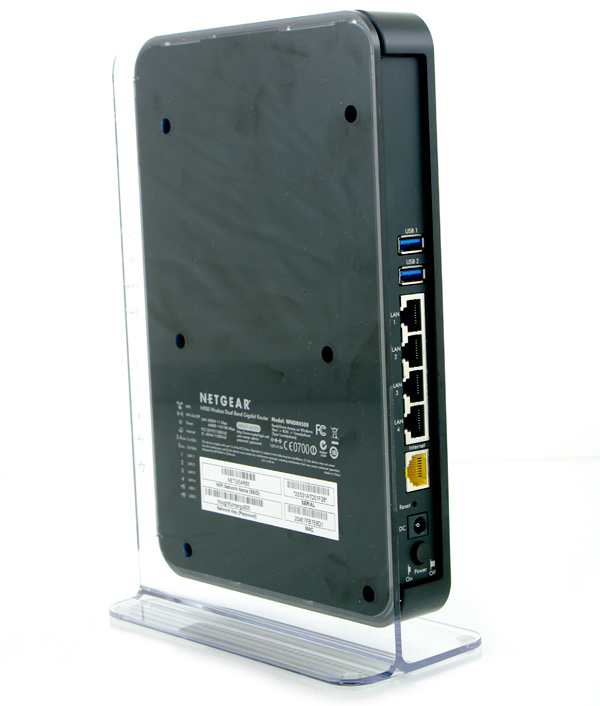 The layout of the N900 has indicator lights on the front surface of the router, showing devices that are connected when ports are in use, as well as status indicators for overall router conditions and network availability. It also features two quick-access buttons to enable or disable wireless as well as activating the Wi-Fi Protected Setup capability to connect to ready-to-pair devices in the surrounding area. This minimalistic design lets you see what’s going on with a quick glance without looking too obtrusive if its mounted out in the open.

The back of the router has all the interface options including two USB ports, four 10/100/1000 gigabit device ports, one gigabit WAN port, and a DC-input jack. Netgear also includes a master on/off switch to be able to turn off the N900 without disconnecting it from the wall. 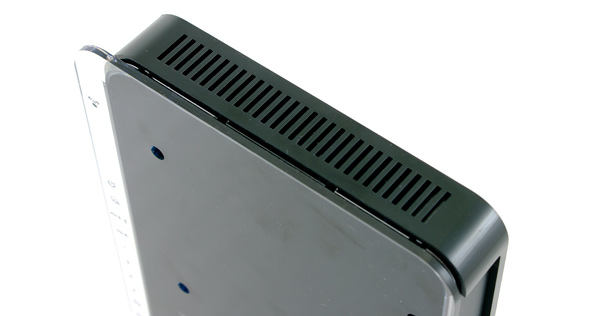 In its vertical mounting position the Netgear N900 is very stable on its clear plastic footing, which also helps improve cooling. Lifted roughly 1cm from the base, the bottom of the router body has vents to draw cool air in and passively lift up and out the top through matching vents. As routers become more powerful and offer more features, cooling starts to become an issue that needs to be dealt with, and Netgear pulled it off in a very elegant manner. 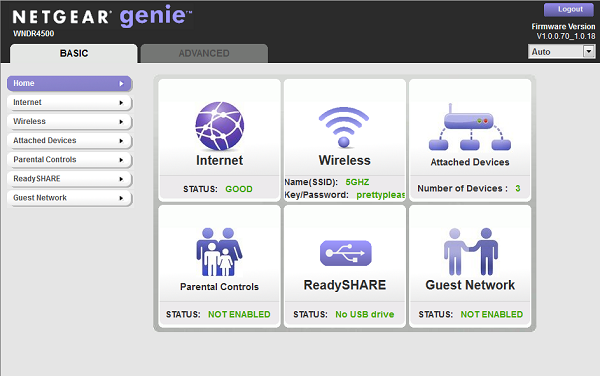 Getting the router up and running from a storage aspect is incredibly easy. Out of the box the router loads pre-set access points for both 2.4 and 5GHZ Wi-Fi as well as walks you through an initial setup that you can bypass just to get to the internet start working. Both access points have encryption enabled by default with a strong password, preventing anyone from hopping onto your network even if you forget to set custom passwords.

Sharing storage over the network is as simple as plugging in an external drive to one of the USB ports on the back of the N900. From there the default read/write profile gives everyone access and it shows up as an available share at the router’s IP address. 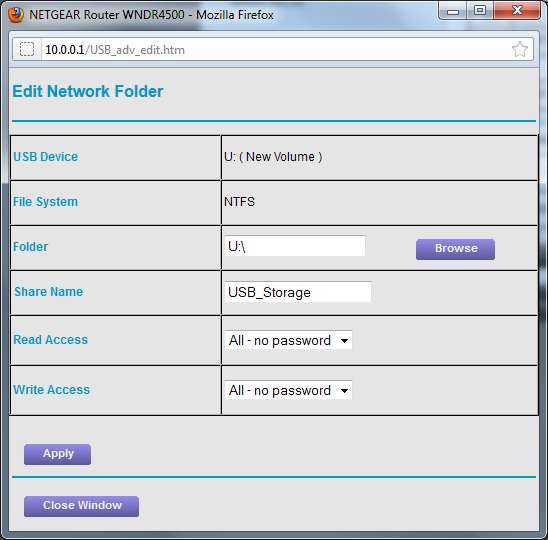 Mapping that shared device allows you to stay connected, as well as finding the routers DLNA profile as it shows up on the network for media devices. Another storage method is connecting to shared devices right on the network already, such as a NAS or another computer with a shared drive. In this review we will cover both of those scenarios and show what this router is capable of in terms of switch throughput and USB data transfer speeds.

To mimic a home network scenario, as well as show the absolute maximum level of performance you can expect to pass through this router, we measured the speed of mapped storage from the router directly or a local computer with a shared RAM Disk. In the case of the shared USB storage we tested it over gigabit Ethernet only, but for the shared RAM Disk we showed maximum speeds we were able to achieve over both gigabit and wireless LAN using our Lenovo ThinkPad W520.

For our shared USB storage test the device used was a Corsair Force GT SSD connected through an external USB 3.0 enclosure. This was to completely rule out any limitations from the hardware we used to test the storage capabilities. Over gigabit Ethernet we measured an average sequential read speed of 8.3MB/s and an average write speed of 12.2MB/s. Compared to dedicated NAS devices or shared folders on other computers this is pretty slow (just reaching the speeds of a 100Mb/s LAN) but for home media sharing this could stream multiple videos simultaneously to devices around your home. Given that most compressed HD video doesn’t even go over 1MB/s while playing, you could easily handle 3 or more videos playing at the same time.

To stress the limits of the onboard 10/100/1000 gigabit switch, we created a test environment using the Intel 1Gb on-board network interfaces on two test systems, with an 8GB RAM Disk setup on the server side. We then used CrystalDiskMark on the client system to measure the peak transfer speeds to and from the server. This shows the performance you can expect out of the box with connected storage that is able to saturate gigabit Ethernet.

We measured an average sequential read speed of 109.1MB/s and a write speed of 109.2MB/s. This just above topped the max limits of gigabit without applying any tweaks to the equipment used. In fact 4K random read and write speeds topped at over 12MB/s or 3,000 IOPS.

Doing this same test instead over 5GHz Wi-Fi over a distance of three feet to a Lenovo ThinkPad W520, we indicated a connection speed of 300Mb/s using the notebook’s Intel AGN6205 Wi-Fi interface. Under the same conditions using CrystalDiskMark connected to the RAM Disk share, we measured a wireless sequential transfer speed of 16.3MB/s read and 14.9MB/s write. For transferring files to the network, running an Apple Time Machine backup, or streaming HD media, the wireless interface on the N900 is up to the task.

The Netgear N900 isn’t exactly revolutionary by Netgear’s own standards, but that isn’t really a bad thing. Netgear offers a deep suite of features, with an easy to use configuration interface that should have even networking newbies up and running pretty quickly. Under best case scenarios, the N900 really delivered, connected to a RAM Disk over Ethernet, we saw both read and write transfer speeds of 109 MB/s. While this is great for moving large files and so on, what’s more practical perhaps for many is the benefit of a fast network to ultra portable notebooks like the MacBook Air, Ultrabooks, tablets and the like that have no Ethernet connectivity options, and limited access to local storage. In those cases rapid wireless networking is key and the N900 didn’t let us down, with 16MB/s throughput to a notebook over wireless connection.

The N900 looks good too, although in most homes or offices, it will be relegated to visual obscurity after setup and configuration. If we’re going to complain much, it’s that the USB transfer speeds are slow – good enough to stream a movie, but not a whole lot else. To be fair, if you’re going to connect to a source of storage, it’s more likely going to be a NAS (which Netgear also offers in their ReadyNAS family) in this case, which will direct connect over Ethernet, than a DAS device using USB.

Easy configuration, fast speeds, direct attached storage support and good looks make the N900 an easy recommendation to those in the market for a new high-performance router.