The RR4360X has the ability to significantly expand its 60-bays via three built-in SAS interfaces, which can connect to three ReadyNAS EDA2000 12-bay or EDA4000 24-bay expansion chassis. This amounts to a huge 132-bay single-node network with more than a petabyte of total storage, one of the industry’s largest SMB offerings in its class.

The RR4360X also features 5 levels of data protection as well as ReadyDR backup and disaster recovery. This includes Flex-RAID (RAID50 and RAID60) for improved performance and fault tolerance, built-in anti-virus, Incremental backup copies with unlimited snapshots, bit-rot protection against media degradation, and replication and backup services for disaster recovery to either a public cloud or another ReadyNAS. Additionally, the organizations can use iOS and Android devices to remotely setup, monitor, and manage the RR4360X with NETGEAR’s Insight management app.

The ReadyNAS 4360X is a massive 4U rack NAS solution that features 60 top-loading bays accessed by simply pressing the two release buttons located on either side of the unit. All trays have a screw-less design, so you can easily pop in the drives without the use of any tools. It does, however, have a screw mount for those looking to better secure their drives in place. Those with limited space should also keep in mind that the ReadyNAS 4360X is longer than most rack units at almost a meter in length. 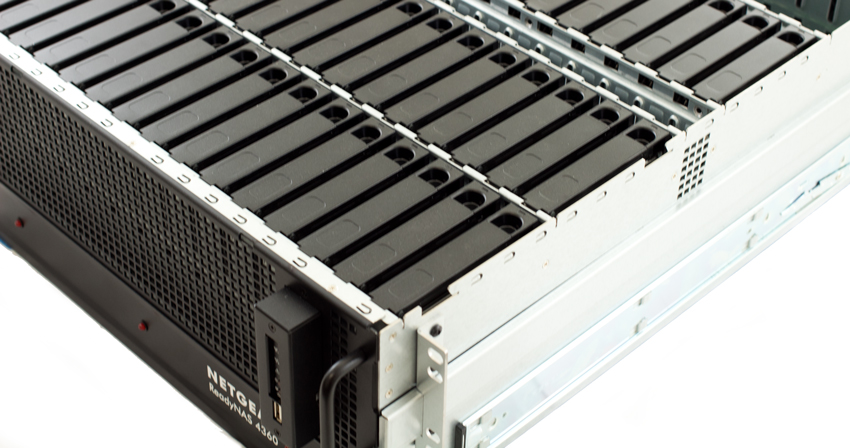 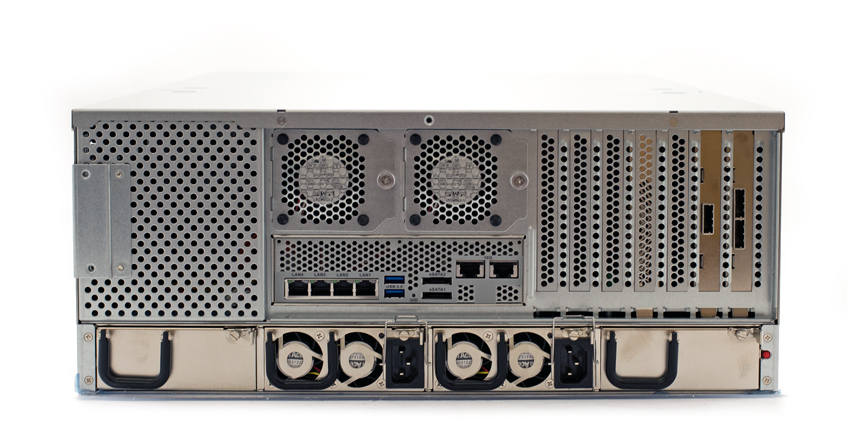 Power button and USB port is located on the front panel, the latter which is used for encrypted volumes. The rear is home to the four Gigabit Lan Ports (two 10GbE Ports), two USB 3.0 ports, two eSATA ports, three mini-SAS expansion interfaces, two power supplies units (which is needed to power all 60 drives. If you're looking for redundancy, Netgear recommends to have three or four PSUs)

We’ve covered ReadyCLOUD and ReadyNAS OS in previous reviews, so we will just briefly go over the software. We suggest reading our RN212 review for a more in-depth look at Netgear’s OS solutions. Once you get the RR4360X up and running, you will be able to use the ReadyNAS OS (currently version 6.7) to start managing the Netgear NAS.

Version 6.7 has the same appealing navigation design across the top of the dashboard: System, Shares, iSCSI, Accounts, Network, Apps, Cloud, Backup, Admin password, and Language. Navigating through each section is very responsive.

The main page (System>Overview) displays the general information about the RR4360X, including how much capacity has been used and specifications of the NAS itself. This includes the serial number associated with your NAS device. Installed apps that can be launched also appear in this section. 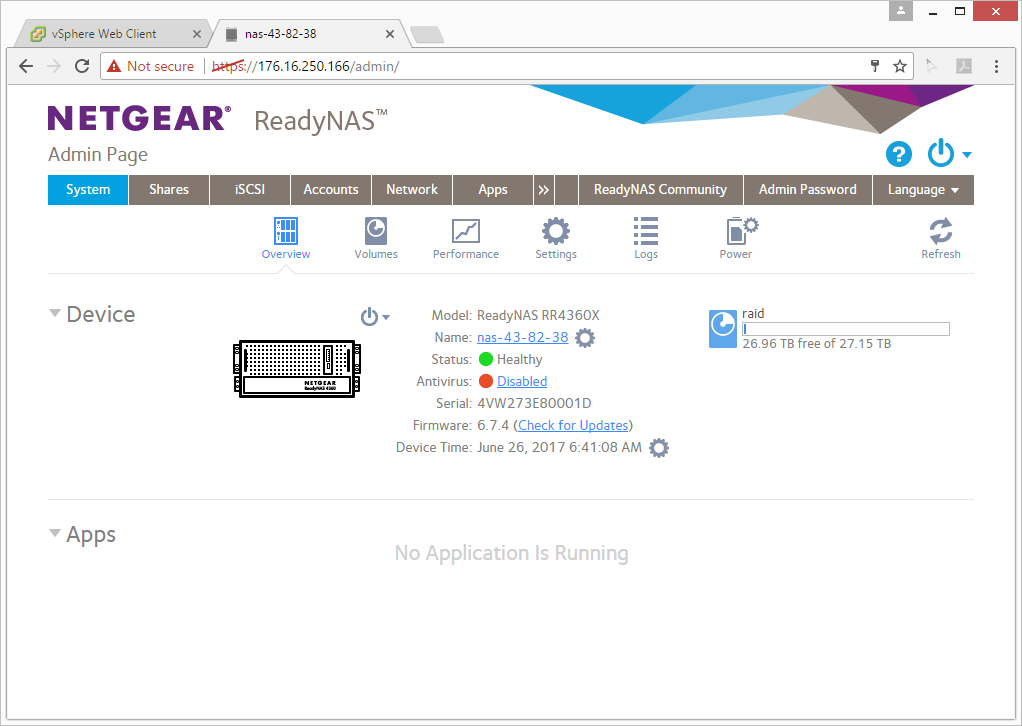 The Volumes page has various options to manage volumes on the RR4360X, such as adding, deleting and changing the volume’s RAID mode and level. You can also check volume status, perform volume maintenance, and configure volume protection. Note that the RR4360 series only supports Flex-RAID. 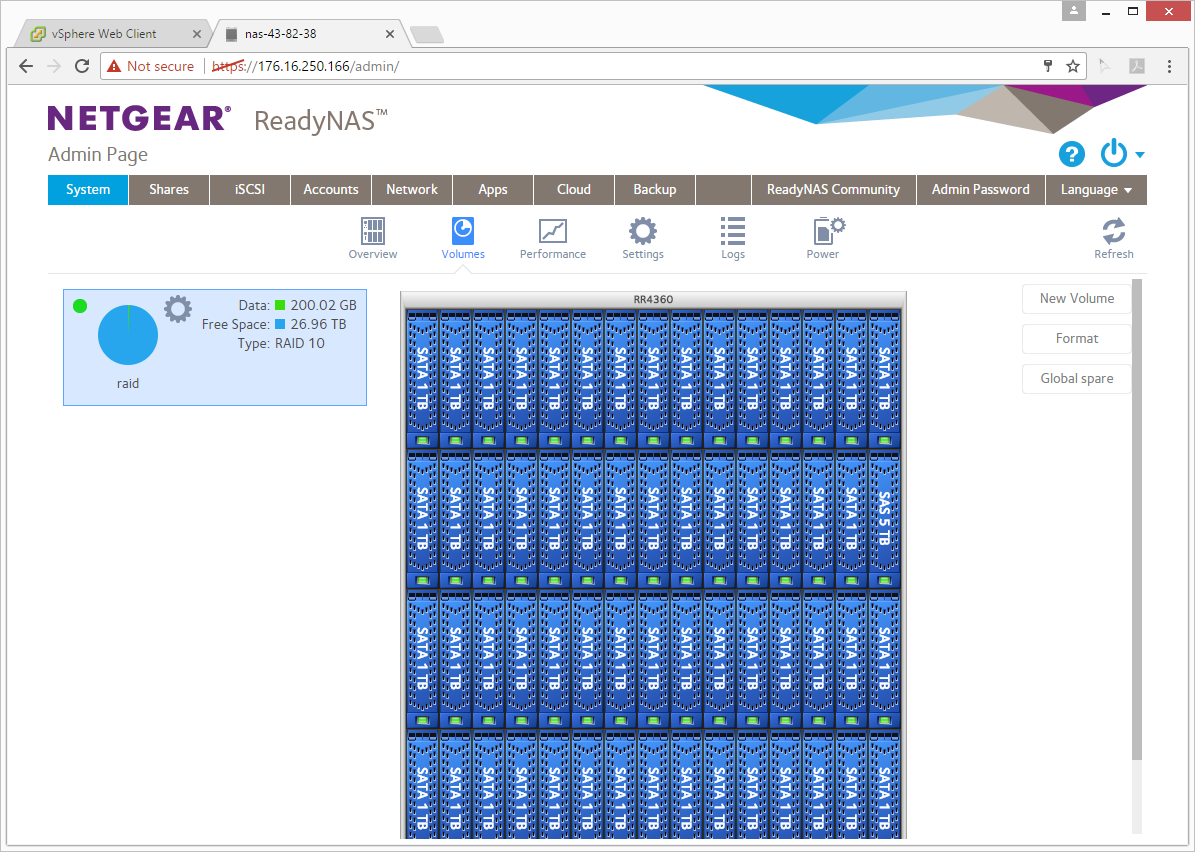 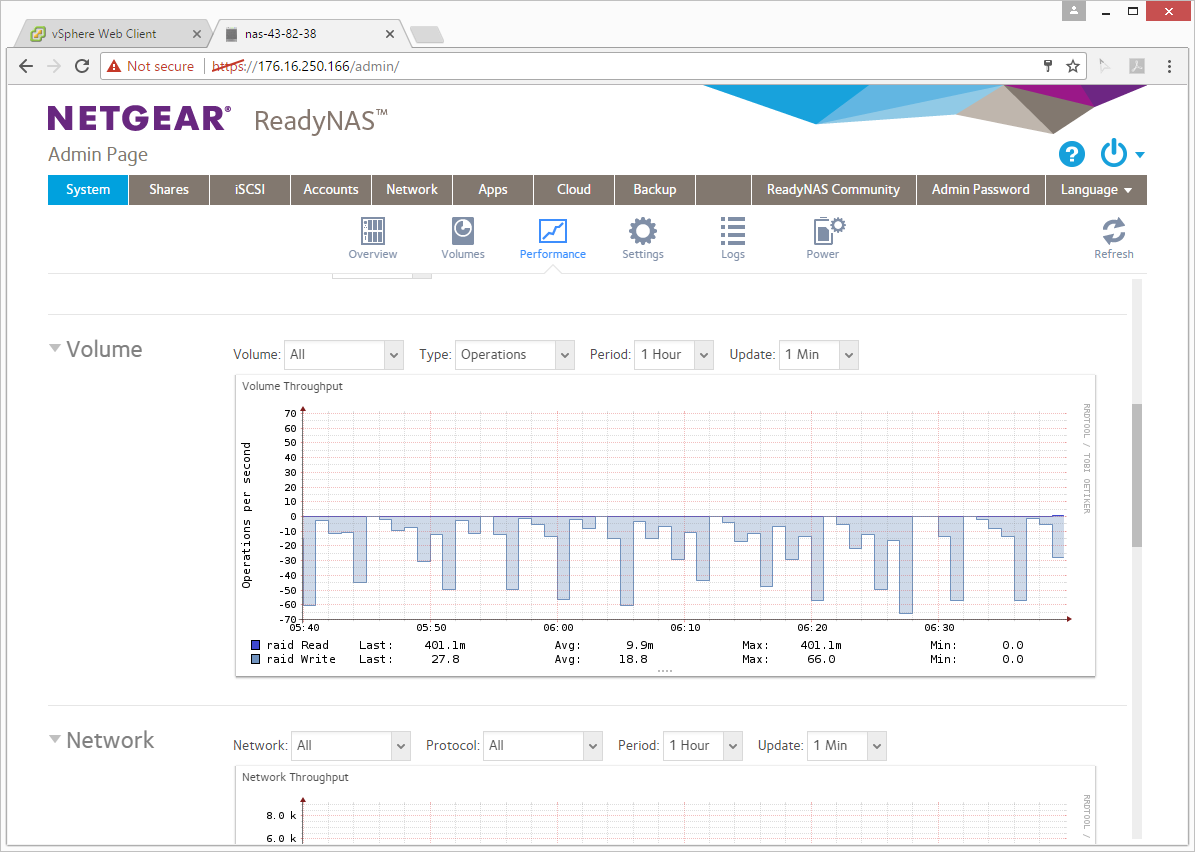 The Shared page lists all shared folders and LUNs on each volume displays. You can also create shared folders by clicking the New Shares button to the right of a specific volume. 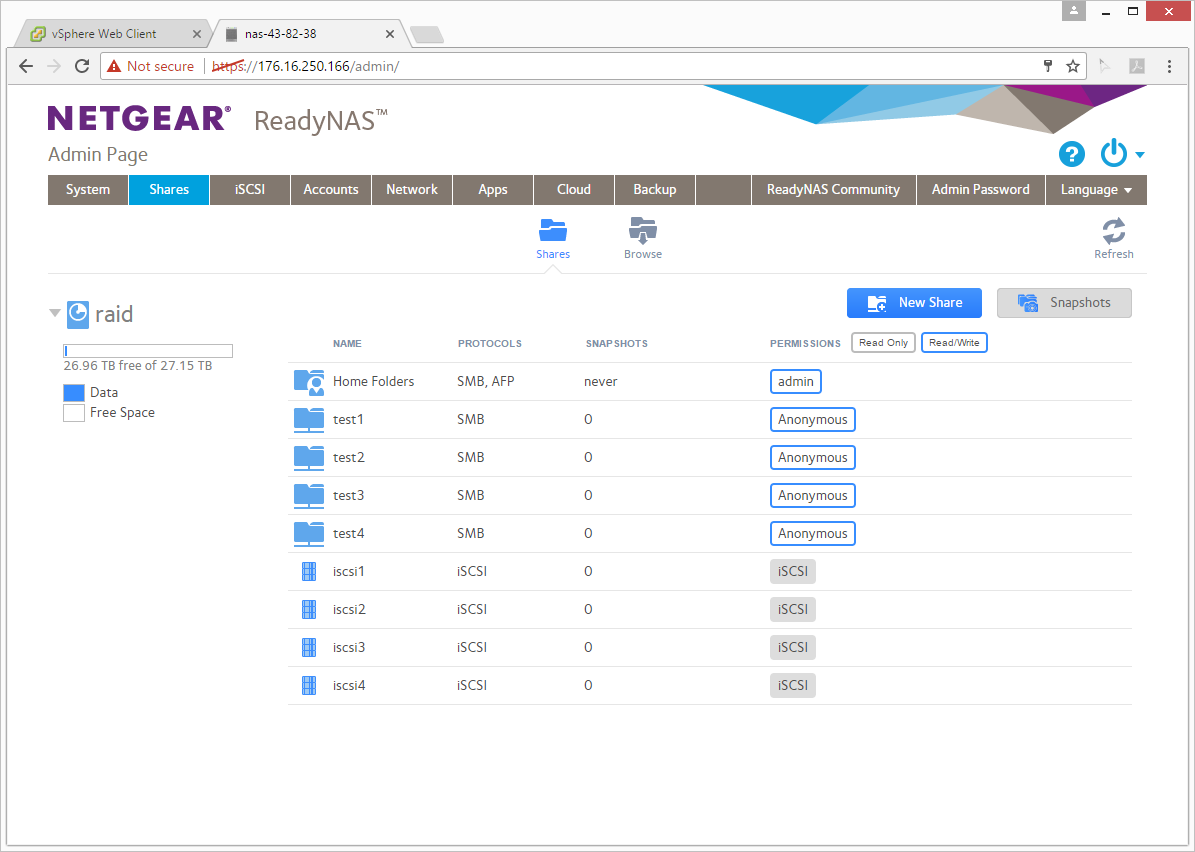 In the first of our enterprise workloads, we measured a long sample of random 4k performance with 100% write and 100% read activity using the CIFS and iSCSI protocol in both RAID10 and RAID60. Here, the RR4360x showed its best performance in iSCSI, with 12,422 IOPS and 732 IOPS (RAID10) and 2,599 IOPS and 761 IOPS for writes and reads, respectively.

In our next benchmark, we doubled the transfer size to 8K where there was a massive difference in read performance when comparing iSCSI vs. CIFS (i.e. 202,047 vs. 82,648 IOPS, respectively in RAID10). Though the disparity wasn’t as pronounced for writes, it was still significant.

In our next four charts, we will be showing results based on a protocol consisting of 70% read operations and 30% write operations with an 8K transfer size. As such, the workload is then varied from 2 threads and a queue depth of 2 up to 16 threads and 16 queue. Here, the iSCSI protocol was the only configuration what showed and significant performance gains as the test went on (for example, Netgear RR4360x RAID10 iSCSI posted a range of 581 IOPS at 2T/2Q and 940 IOPS. 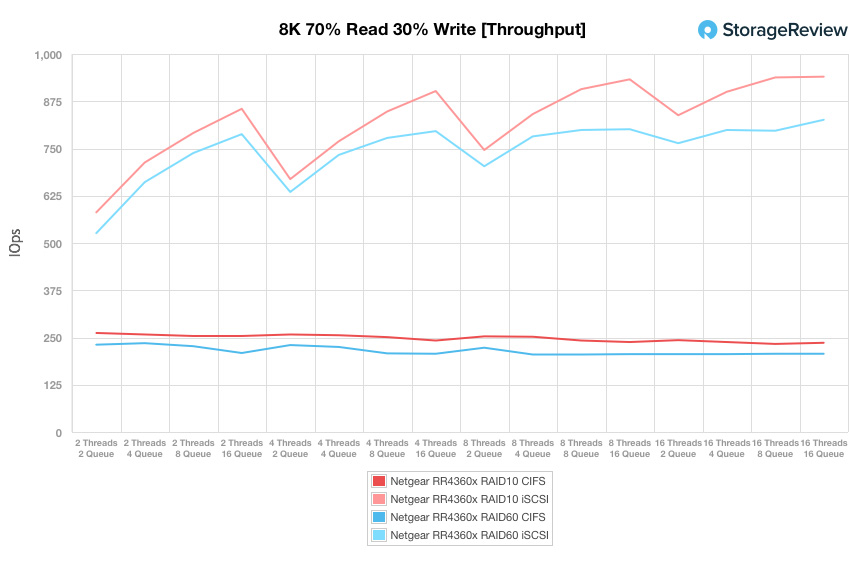 Like in throughput, the RR4360x’s iSCSI configurations showed much better performance in our RAID10 and RAID60 with 7.58ms at 2T/2Q and 309.58ms  for the latter configuration. 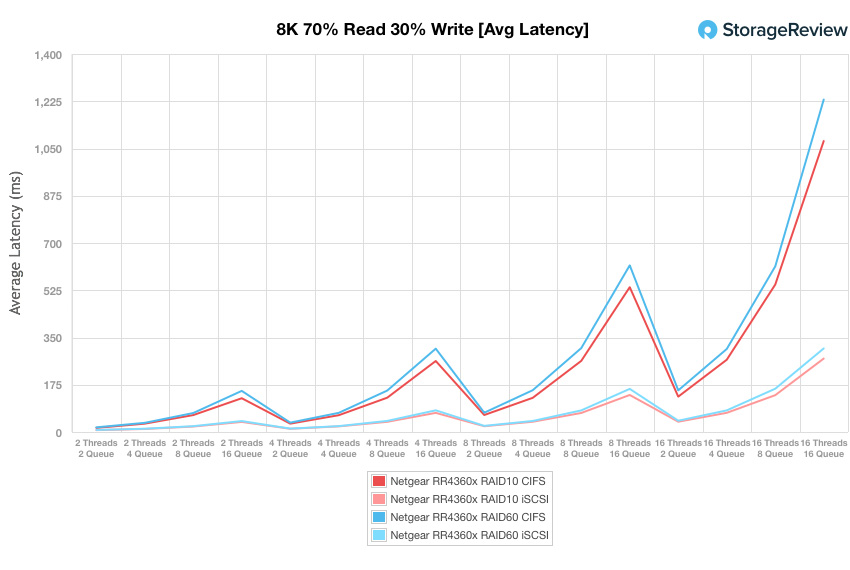 When looking at max latency during our 8K 70% read operations and 30% write test, results were much more even during our RAID10 configuration. However, there significant difference in performance between iSCSI and CIFS during RAID60 with latency jumping to 7,984.88ms and 3,764.8ms, respectively. 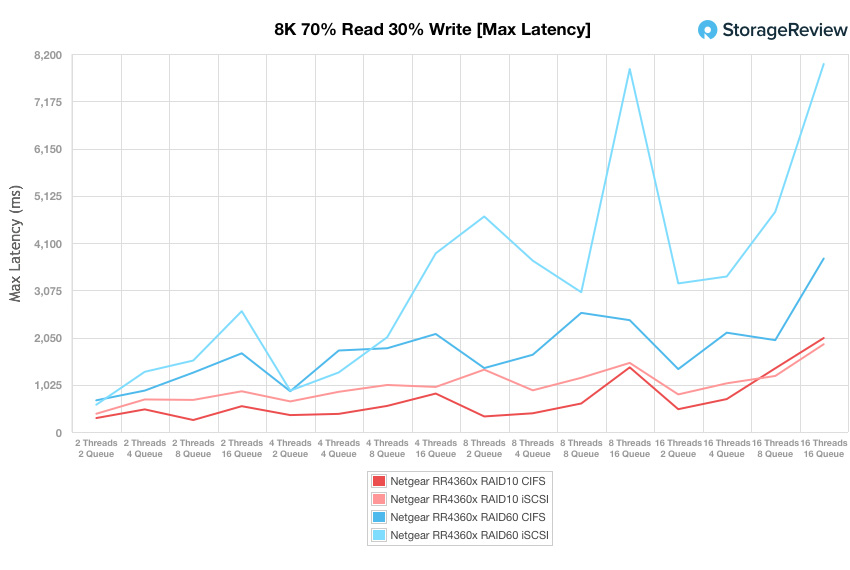 When looking at standard deviation, the RR4360x showed much more even performance overall with the exception of the RAID60 iSCSI configuration, which posted double the latency compared to the other protocols/configurations near the end (412.95ms). 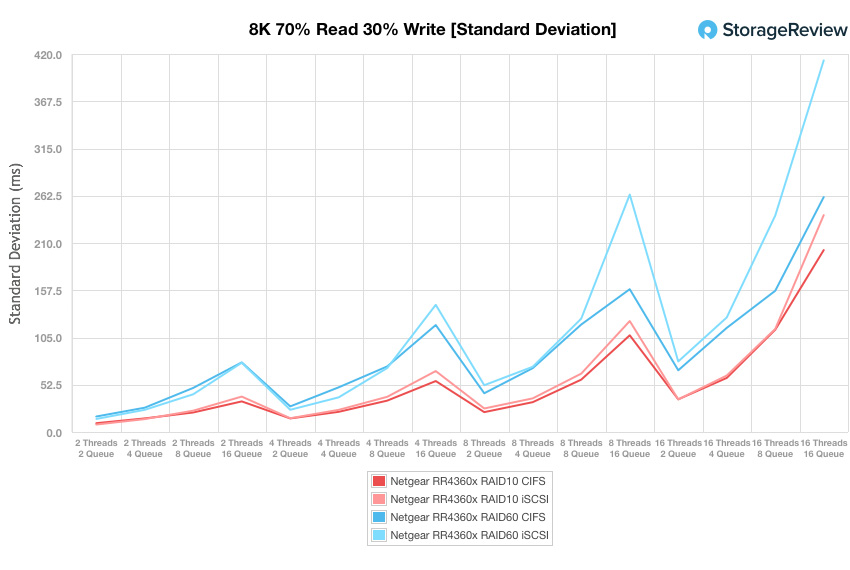 The final synthetic benchmark utilizes much larger 128k transfer sizes with 100% read and 100% write operations. In this scenario, the overall fastest configuration was under the iSCSI protocol, which in RAID10 posted 1.774GB/s read and 1.947GB/s write and in RAID60 hit 1.772GB/s read and 1.641GB/s.

The NETGEAR ReadyNAS 4360x is both massive in size and in storage capacity and provides SMBs and smaller enterprises with an impressive solution to their huge storage demands via its 60 drive bays. It can even scale to a 132-bay single-node network (using three ReadyNAS EDA2000 12-bay or EDA4000 24-bay expansion chassis), offering more than a petabyte in total storage. The RR4360X features a rugged, premium metal build with seamless access to the 60 drives via the top panel, which easily slides off with the press of two buttons. Like all NETGEAR NAS solutions, the RR4360X also comes bundled with ReadyNAS OS, a powerful, yet easy-to-use, data management software.

The NETGEAR ReadyNAS 4360x offers tons of capacity in a proven NAS system great for those with an eye out for those capabilities in a cost-effective solution.