The Samsung Portable SSD T5 is the company’s latest high-performing mobile storage solution powered by advanced V-NAND technology. The T5 is the long-awaited successor to the popular T3 (released way back in early 2016) and is designed for media professionals and enthusiasts who transfer massive amounts of data.

Leveraging the USB 3.1 Gen 2 (10Gbps) interface, the T5 is quoted with maximum transfer speeds up to 540MB/s for all capacities—which is almost 100MB/s faster than the T3—and can be connected directly to an Android device. Samsung has also updated the drive’s embedded software, allowing you to reset your password, check capacity and manage firmware updates. 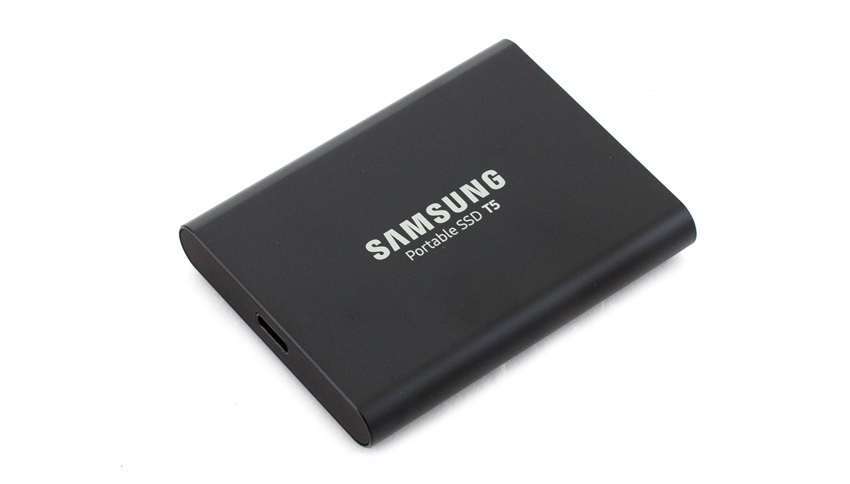 The T5 features AES 256-bit hardware encryption to ensure the protection sensitive user data. Moreover, it is equipped with Dynamic Thermal Guard Protection technology, which automatically monitors and manages optimal operating temperatures to help reduce overheating. Samsung has also built the T5 with a full metal, shock-resistant internal frame that it can endure drops of up to 2 meters on a hard surface.

Sporting a rugged, rounded-metal unibody design, the T5 is an extremely compact device that weighs in at just 51 grams and measures 10.5 mm thick, allowing it easily fit in a pocket or the palm of a hand. It also features a brand-new design with two different anodized aluminum finishes: solid blue (250GB and 500GB models) and deep black (1TB and 2TB models), both of which are branded with the company and product names on both sides.

The T5 also comes bundled with a Type-C to C and Type-C to A cables for immediate easy access once you open the box. There is a blue indicator light when the drive is plugged in and working by the USB-C port.

To test the Samsung Portable SSD T5, we used the HP Z2 Mini Workstation and the built-in USB-C port and compared with these other leading portable SSDs:

We will also be looking at two capacities: the 500GB and 2TB models.

The Samsung T5 is a welcomed addition to company’s mobile storage portfolio, as it enters the always-growing and highly sought-after portable SSD market. Compact and lightweight, the T5 improved on its predecessor in every way with the exception of a higher capacity point; it will certainly suit the needs of any on-the-go professionals or media enthusiasts that work with large volumes of data. Although Samsung indicated similar performance for all models in the T5 family, consistency between the lower and higher capacities points was a bit uneven. For example, the 2TB model had an impressive performance across the board, while the 500GB model ran about slower in writes. Lower capacities failed to achieve Samsung’s quoted performance numbers as well. That being said, they are still two of the fastest and most portable SSDs out there.

The improved modern design of the T5 is also very appealing. Having such a compact, high-performing, and high-capacity storage solution that easily fits into a small pocket is extremely useful. Coupling all of this with the optional AES 256-bit hardware encryption, simple password protection functionality, and its ability to seamlessly work with Android devices (which is a vital feature for many professionals on the go) makes this a fantastic release by Samsung.

The Samsung T5 vastly improves on its predecessor as this ultra-portable SSD boasts best-of-class performance and design.