The NETGEAR ReadyNAS 524X is a 4-bay storage solution designed for small-to-medium businesses that need a mid-range NAS with enterprise data protection functionality.  Powered by an Intel D1508 Dual Core 2.2GHz Server Processor, the 524X is the smallest model of the 520 Series, featuring a built-in 10Gb Ethernet port, three USB 3.0 ports, and compatibility with SATA/SSD 2.5″ or 3.5″ hot-swappable drives.

The NETGEAR ReadyNAS 524X is a 4-bay storage solution designed for small-to-medium businesses that need a mid-range NAS with enterprise data protection functionality.  Powered by an Intel D1508 Dual Core 2.2GHz Server Processor, the 524X is the smallest model of the 520 Series, featuring a built-in 10Gb Ethernet port, three USB 3.0 ports, and compatibility with SATA/SSD 2.5″ or 3.5″ hot-swappable drives. 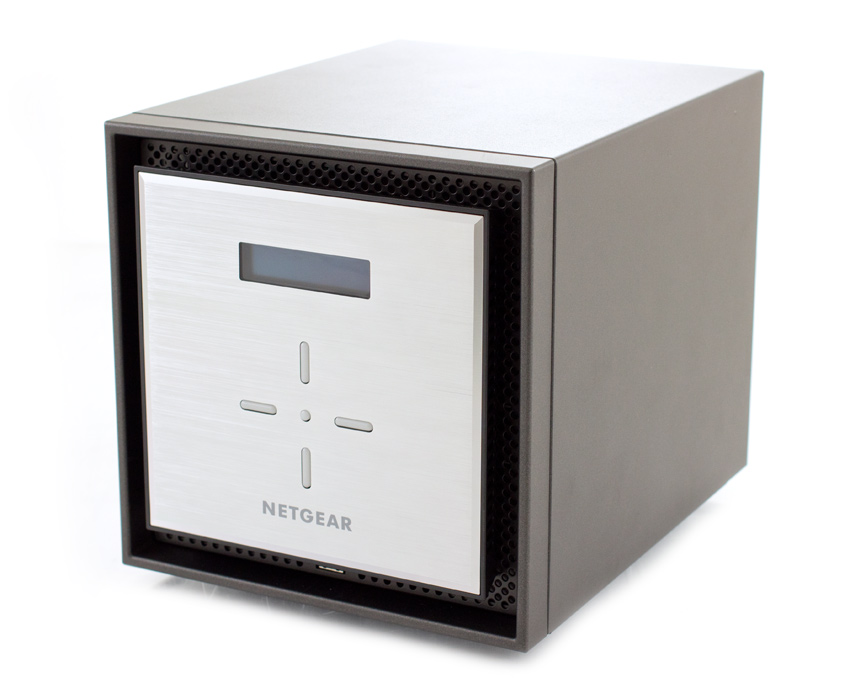 The 524X does pretty much what you can expect from most professional NAS solutions. However, it has a range of nice-to-haves as well, including the ability to centralize data in all major OS environments: PC, Mac and Linux. Moreover, its ReadyCLOUD software has full Dropbox integration to make syncing files a seamless process.

One of the most unique traits of Netgear’s 524X (as well as other NAS solutions from the SMB ReadyNAS family) is its modern, slick-looking design. With its black metal chassis and front silver faceplate, the 524X is easily one of the nicest looking NAS solutions out there. It’s also a rugged little device; once you place this on your desk, the 524X isn’t going to budge. 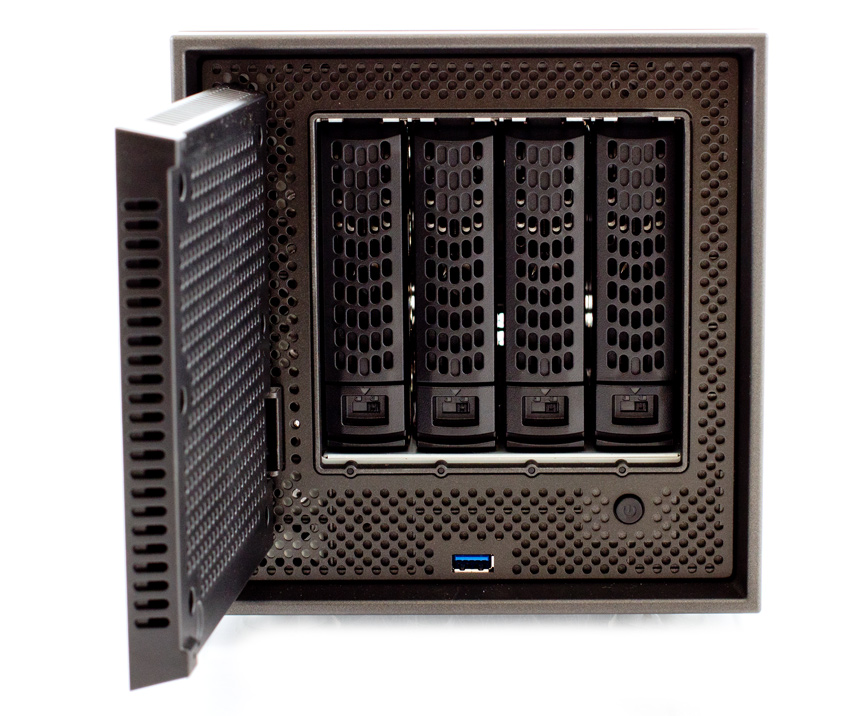 The faceplate (which is surrounded by ventilation) is home to the status and menu display screen, which is controlled by the OK and up, down, left and right blue backlight buttons. Also on the front is a USB 3.0 port

The faceplate also acts as the drive-bay door, which is opened by simply pulling it towards you. You will see the drive bays stacked horizontally, each having their own disk tray handle, release latch and lock, as well as a disk status LED. The power button is located underneath the last drive bay on the right. 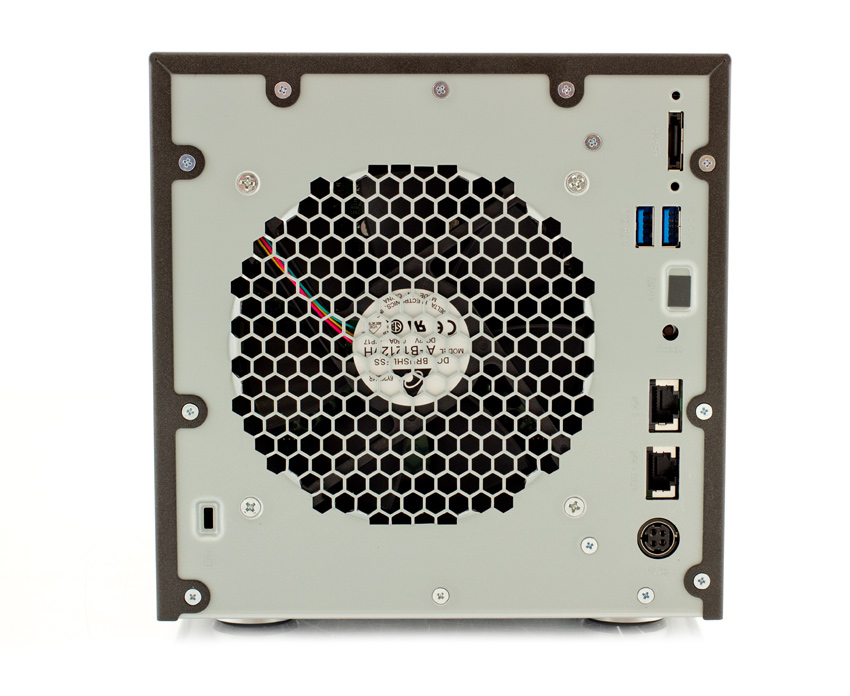 Front and center of the back panel lies the exhaust fan ventilation to keep the system running smoothly. On the right is the eSATA port, two USB 3.0 ports, Micro USB console connector (marked as UART), the reset button, one GbE LAN port and one 10 GbE LAN port with LED status indicators and the power cable socket. The usual Kensington lock is located at the bottom left.

Netgear’s ReadyNAS OS (currently in version 6.8) powers all ReadyNAS devices including the new 524x solution. We’ve looked at the OS in past Netgear reviews and found the software to offer a fairly comprehensive set of features and very easy to use.

Once the Netgear NAS has been set up, users will see the main dashboard of the OS once they log in. The main section (System>Overview) displays all the general information about the 524x, how much capacity has been used, and the apps that are installed on the NAS. Across the top are tabs for System, Shares, iSCSI, Accounts, Network, Apps, Cloud, Backup, Admin Password, Language, as well as help and refresh buttons. 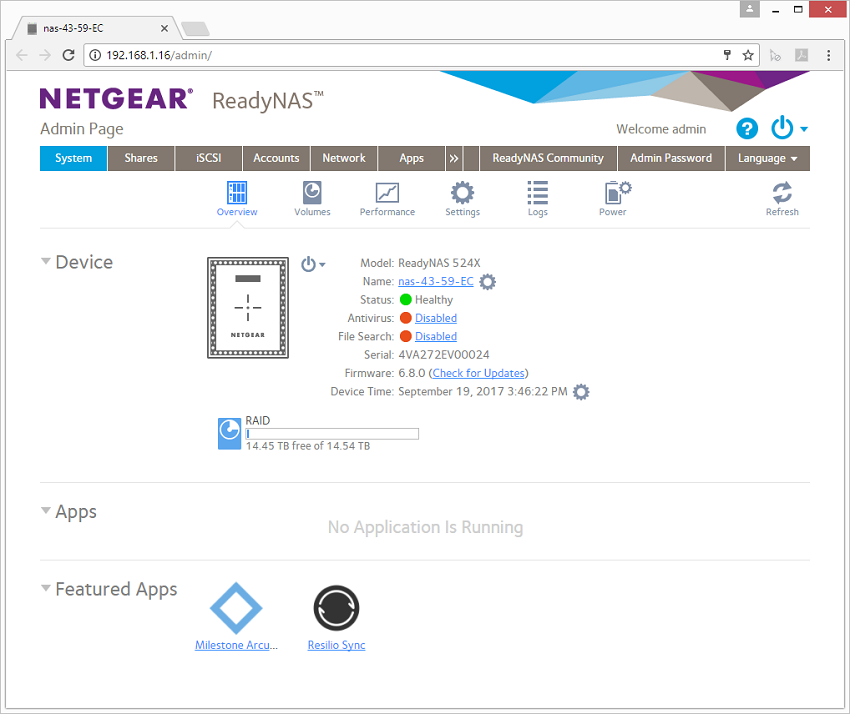 The System tab includes several sub tabs: Overview, Volumes, Performance, Settings, Logs, and Power. Clicking Volumes shows a graphical representation on the left-hand side of the page, which indicates how much capacity has been used versus available space. It also shows how many drives have been installed, along with their individual capacity and the RAID type (RAID6 in this instance). 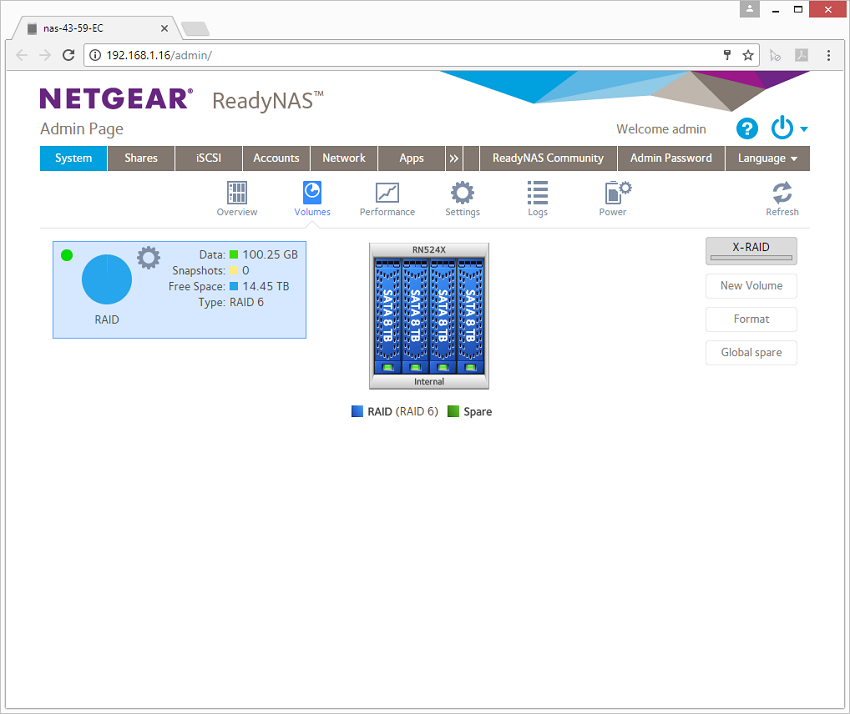 The Performance tab shows users the current status of components such as HDDs (i.e., the Toshiba drives), CPU, Fan, and the System temperature. It also displays the performance of the volumes that are set up on the 524x. 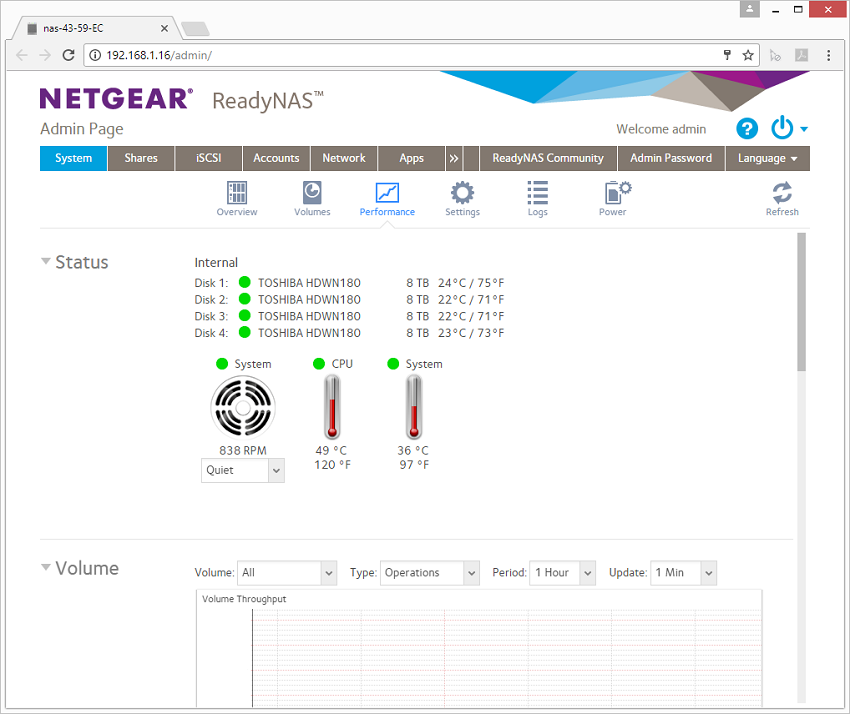 The Shares tab allows admins to set up and view shares. Users can also browse through them and check a specific timeline of a specific share’s setup and usage. 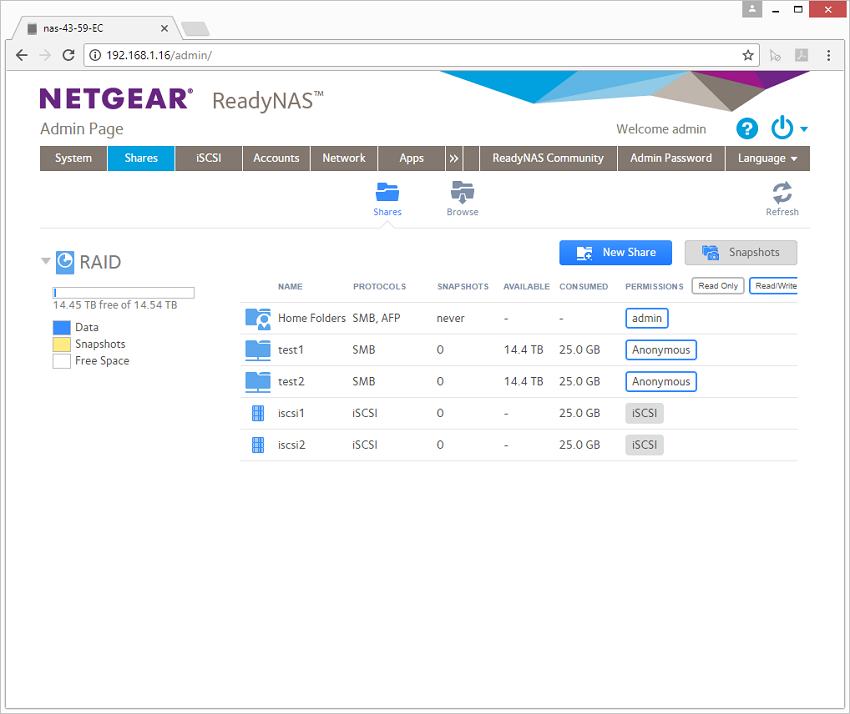 While the OS has been updated since the older 212 was released, updates haven’t been overly drastic and the core OS is still very similar. For a more in-depth look into the OS checkout the NETGEAR ReadyNAS 212 Review.

Our enterprise hard drive benchmark process preconditions each drive into steady-state with the same workload the device will be tested with under a heavy load of 16 threads with an outstanding queue of 16 per thread. It is then tested in set intervals in multiple thread/queue depth profiles to show performance under light and heavy usage. Since hard drives reach their rated performance level very quickly, we only graph out the main sections of each test. Although we typically include several metrics for each of our performance profiles (i.e., throughput, average latency, max latency, and standard deviation), we will only be providing throughput results for this review.

When moving to average latency, the 524X posted 669.892ms read and 398.829ms write when configured in iSCSI. Though the ReadyNAS had higher read latency in CIFS with 816.64ms, it had slightly better average write latency at 393.438ms.

Compared to the fixed 16 thread, 16 queue max workload we performed in the 100% 4K write test, our mixed workload profiles scale the performance across a wide range of thread/queue combinations. In these tests, we span workload intensity from 2 threads and 2 queue up to 16 threads and 16 queue. The 524x performed its best under iSCSI with a range of 353 IOPS to 417 IOPS, while posting a range of 331 IOPS to 343 IOPS in CIFS.

When looking at average latency, iSCSI started off much better than CIFS with just 11.29ms; however, it ended up having almost twice the latency by the end (613.16ms vs 372.06ms). Both configurations were very unstable overall.

In maximum latency, the ReadyNAS 524X posted a range of 2519.27ms to 5479.1ms during our iSCSI block-level test. Though CIFS connectivity showed slightly higher initial burst latency with 2530.16ms, it showed slightly better performance of 5361.8ms at 16T/16Q.

Our last test in our small NAS Synthetic Workload testing is the 128K test, which is a large block sequential test that shows the highest sequential transfer speed. When looking at the 128K performance of 100% write and 100% read activity over two 1G connections, the ReadyNAS 524X showed very similar results in both iSCSI and CIFS with 231.4MB/s read and 224.7MB/s write, and 231.3MB/s read and 225.0MB/s write, respectively. Looking at performance over a single 10G link, read performance jumped to 1GB/s over CIFS and nearly 900MB/s over iSCSI. Write speeds also shot up, measuring 645MB/s over CIFS and 711MB/s over iSCSI.

The ReadyNAS 524X is another solid release by Netgear that offers more of the same. Designed for small to medium businesses as well as home offices, the new Netgear 4-bay NAS is equipped to work seamlessly as a file-server, backup, disaster-recovery, and storage-virtualization solution, as well as a personal cloud, with file sharing and sync capabilities. The 524X supports up to a generous 40TB of total storage and has on board 10GbE. The 524X also features comprehensive and easy-to-use management software through the ReadyNAS OS.

Diving into its performance, the NAS showed good overall results for its class. For example, during our long sample of random 4K performance (100% write and 100% read activity), we measured the 524X with 641 IOPS write and 381 IOPS read in iSCSI, while reaching 650 IOPS write and 313 IOPS read in CIFS. Over 1G LAN in 100% 8K sequential throughput, there was little discrepancy between iSCSI and CIFS, as we recorded the 524X with 28,677 IOPS read and 26,583 IOPS write, and 28595 IOPS read and 27,018 IOPS write, respectively. Moreover during our mixed workload profiles, the 524X found its best performance under iSCSI with a range of 353 IOPS to 417 IOPS, while posting a range of 331 IOPS to 343 IOPS in CIFS. In our last benchmark (a large-block 128K sequential test), the ReadyNAS 524X had virtually identical results in both iSCSI and CIFS, recording 231.4MB/s read and 224.7MB/s write, and 231.3MB/s read and 225.0MB/s write, respectively. Looking at performance over the single 10G link the 524X offers, we saw dramatic upticks in performance in our sequential tests, with 8K throughput more than doubling in read metrics, and 128K sequential bandwidth showing a 5x improvement over dual 1G links.

Sporting the same premium build of the Netgear line, the ReadyNAS 524X offers small businesses and home office an easy-to-use NAS solution with capable performance for most workloads.