Oracle Cloud Infrastructure (OCI) has been offering innovative cloud solutions for some time. Back in 2018, we reviewed their bare metal instances, which were crazy fast thanks to NVMe storage and networking infrastructure that was beyond most other clouds. OCI has continued to push the boundaries with HPC instances that leverage the latest 3rd Gen Intel Xeon CPUs and OCI’s fastest networking. This time around though, Oracle has done something different. The OCI Ampere A1 compute instances have an entirely different approach and message – one cent per core hour.

Oracle Cloud Infrastructure (OCI) has been offering innovative cloud solutions for some time. Back in 2018, we reviewed their bare metal instances, which were crazy fast thanks to NVMe storage and networking infrastructure that was beyond most other clouds. OCI has continued to push the boundaries with HPC instances that leverage the latest 3rd Gen Intel Xeon CPUs and OCI’s fastest networking. This time around though, Oracle has done something different. The OCI Ampere A1 compute instances have an entirely different approach and message – one cent per core hour.

Why Arm in the OCI Cloud?

Ampere was launched in 2017 specifically to develop data center processors based on the Arm architecture. While Arm-based CPUs have been present in billions of devices like sensors, cell phones, and other smaller-scale computers, hyperscale data centers have been taking note. Cloud providers have taken interest great interest in Arm as the CPUs give them linear scale, tremendous core density, and lower cost. Oracle lays out the case for Arm here.  In fact, Oracle is so into the potential, they dropped $40 million into Ampere back in 2019.

That investment in Ampere and belief in Arm leads directly to OCI offering the Ampere A1 Compute platform. With Ampere A1 Compute, based on Ampere Altra CPUs, customers can run cloud-native and even general-purpose workloads in the cloud, with aggressive cost metrics. The aforementioned one cent per core hour is championed by Oracle as the lowest cost per core of any major cloud provider. Beyond the headline penny pricing, Oracle does offer a comprehensive cost estimator tool to help organizations plan accordingly. 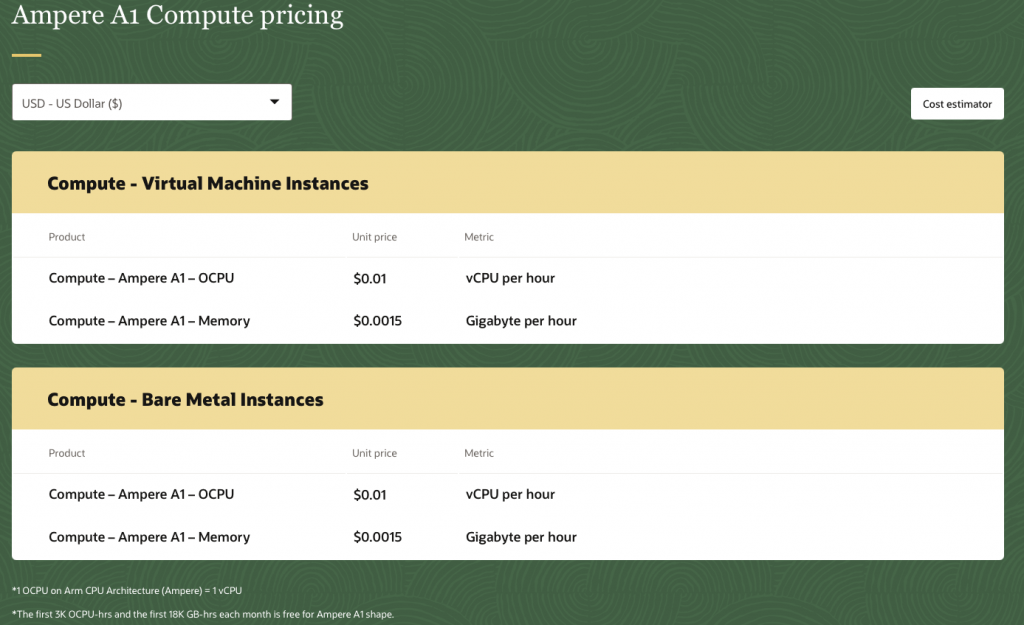 Beyond pricing, there are many other reasons, like deployment flexibility, to get excited about OCI Ampere A1 Compute shapes. OCI offers A1 shapes as both bare metal and VM.  VMs offer sizing from 1 to 80 cores per CPU and 1 to 64GB of memory per core. As bare metal, the shapes offer up to 160 cores and 1TB of memory.

Looking at performance, all cores are capable of running at 3Ghz consistently. Each core comes with its own 64KB L1 I-cache, 64KB L1 D-cache, and  1MB L2 D-cache. Ultimately this helps the cores deliver predictable performance. When combined with the low cost, users can end up with some pretty compelling performance results.

Oracle has published a few blogs around A1 performance that are of interest. The first is NGINX in two configurations, one as a Reverse Proxy server and the other as an API Gateway server. Oracle compares A1 at $.01 per core per hour to Intel.VM.Optimized3 at $.054, and AMD.VM.E4 splitting the difference at $.025 per core per hour. Of course, Ampere hangs well in these results, highlighted by as much as a 68% higher performance per dollar with Ampere A1 vs. the Intel Optimized3 offering. 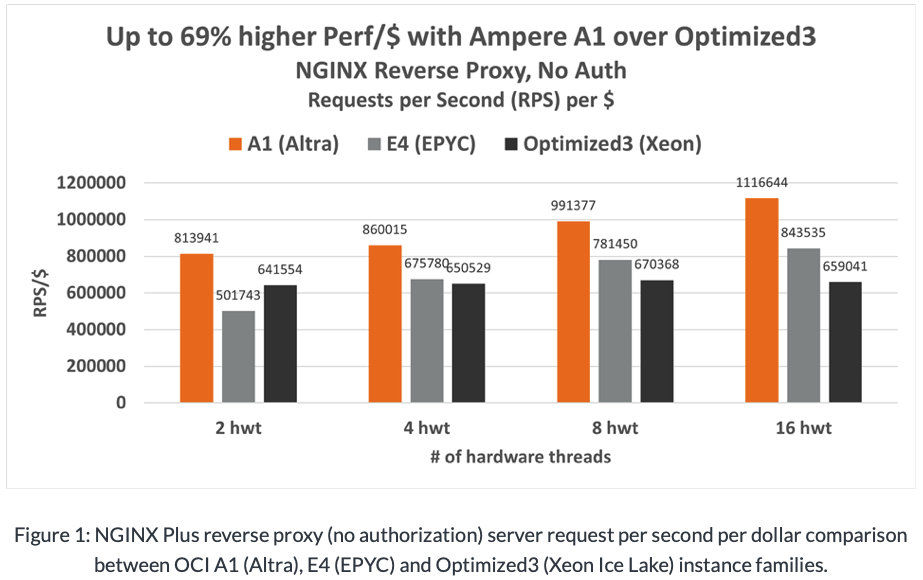 In a second blog, Oracle highlights x264 video encoding performance between Ampere.VM.A1, AMD.VM.E4 (AMD EPYC Gen3) and Intel.VM.Optimized3 (Intel 3rd Gen Xeon). The pricing is the same as the NGINX example above. And the results are about the same in tone as well. In this case A1 drops an eye-popping 98% performance/price benefit on the Intel shapes. 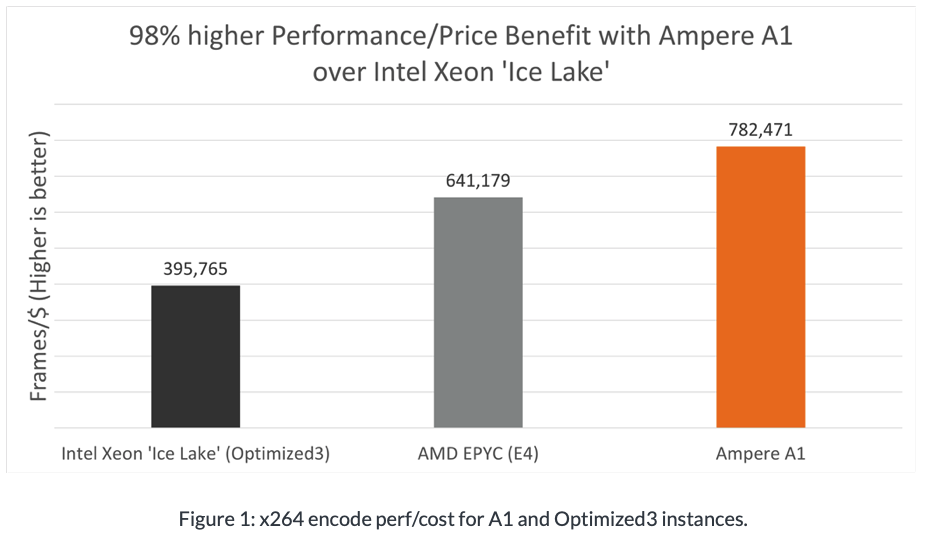 We’ll not spend a lot of time digging through the Oracle results, the blogs provide good detail for those interested. And in a funny twist, the first thing our own Blaise Robitaille did when we were granted unfettered access to these A1 shapes, was to immediately transcode a 15GB H264 to X265. More on that exercise below.

To be fair – we leveled the playing field and created an 8 core instance with 32GB of RAM across all 3 platforms; AMD, Intel and Ampere. What’s very different though in these configurations is cost. 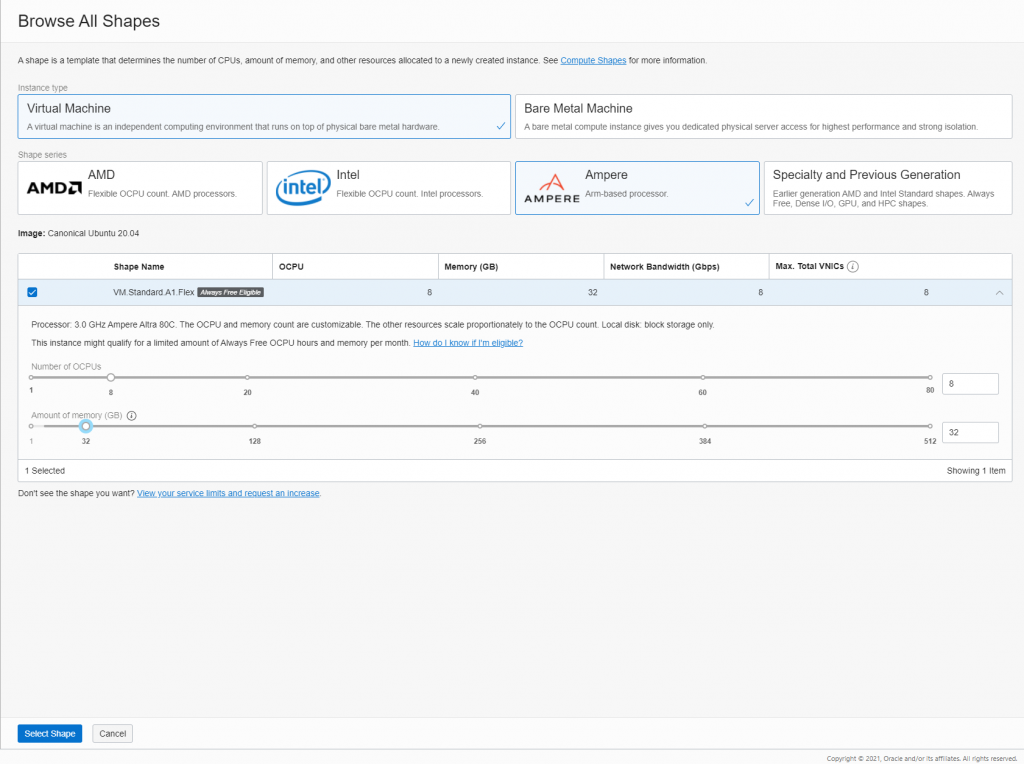 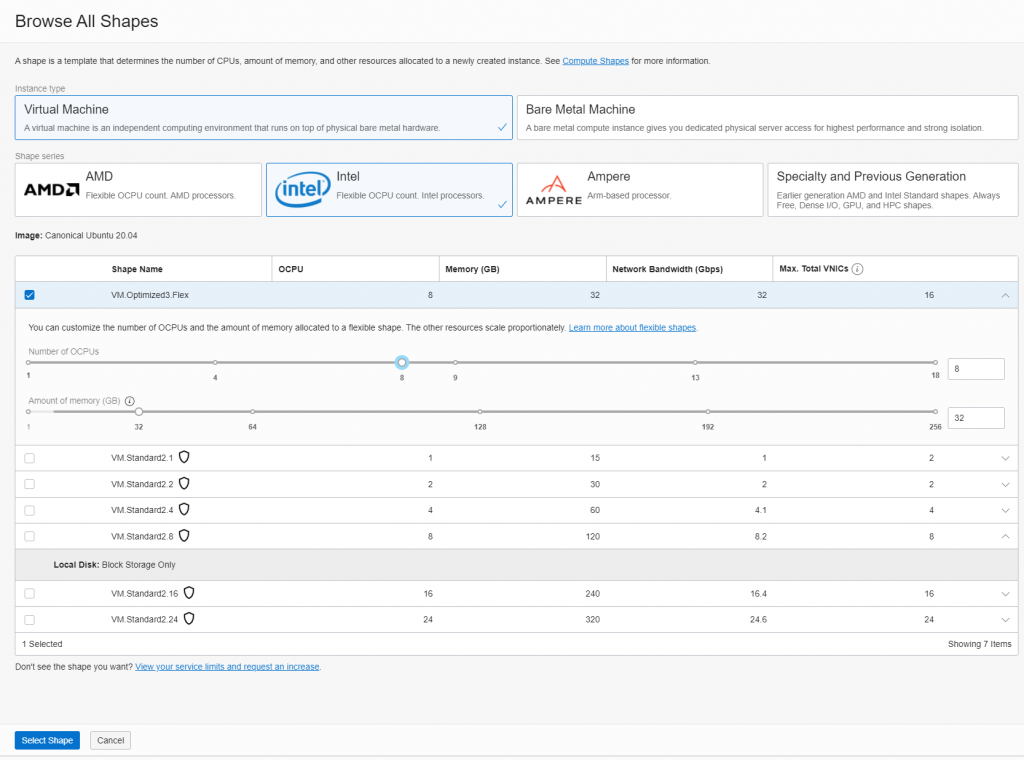 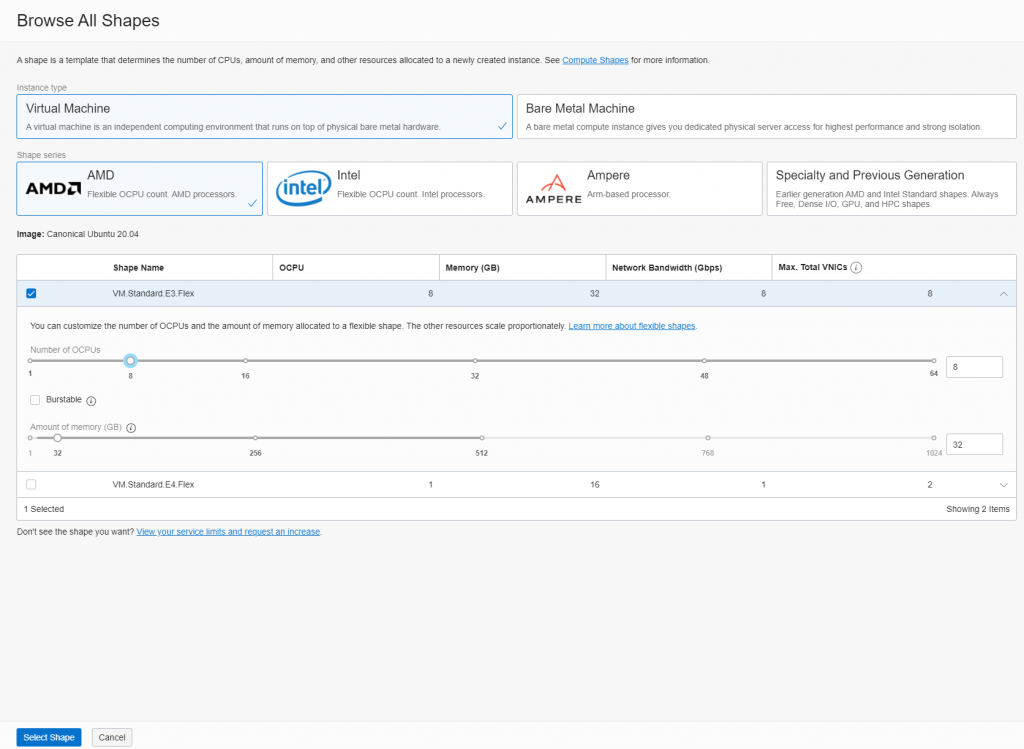 It should be noted our AMD data is on the E3 shape which was available at the time of testing, there is now an E4 option.

We set up an Ubuntu 20.04 instance and used handbrake to convert an H264 movie of 15.3GB down to a 1.9GB X265 file on all three platforms. It should be noted our AMD data is on the E3 shape which was available at the time of testing, there is now an E4 option. 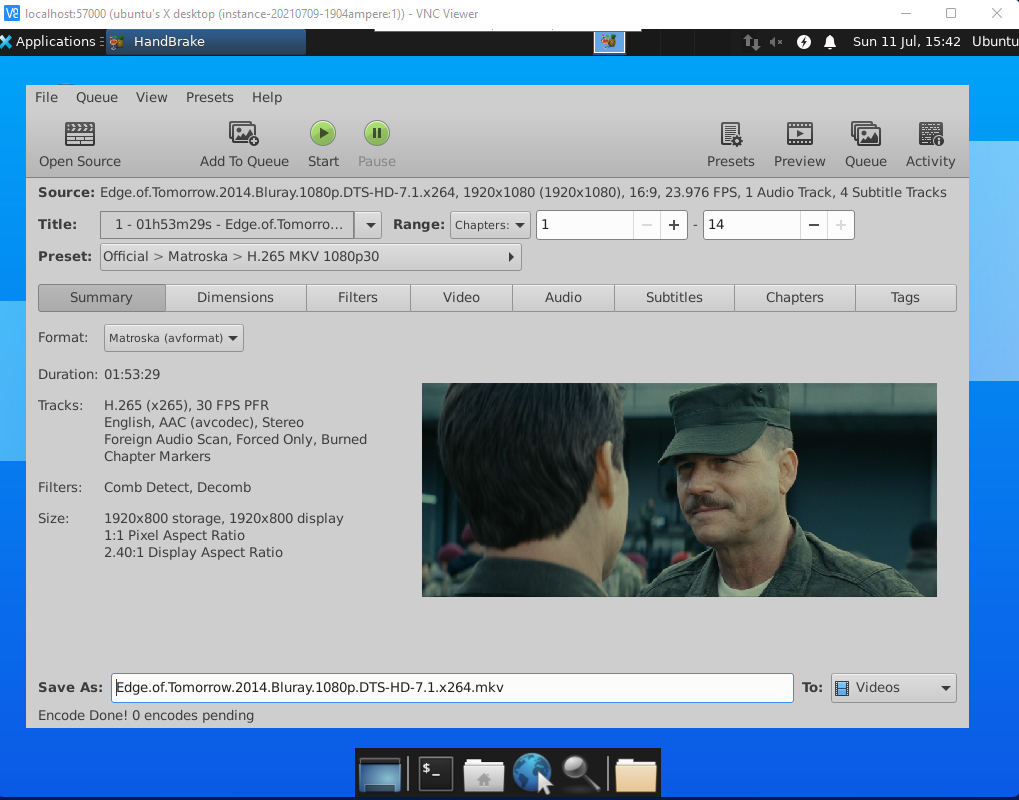 At a high level, the testing panned out kind of how we expected given the scenario and hardware dedicated to the testing.

In terms of time to complete, here’s how each shape did in seconds to encode the 163,262 frames. 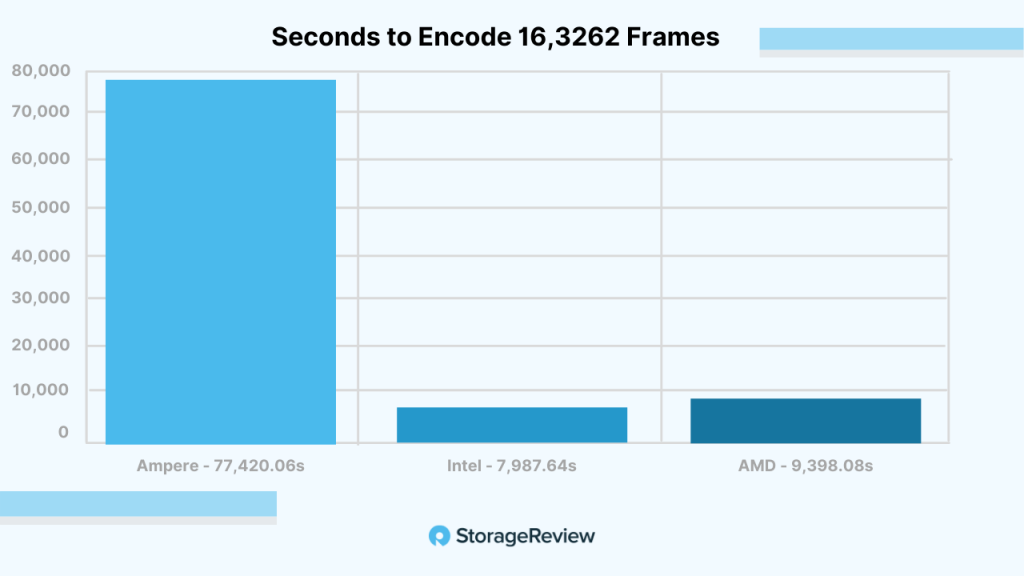 We ran one more encoding job as well, just to see if the overall performance gap can be closed. We ran an x264 encoding test as well. This amounted to a 500 frame 2160p test file (in to tree).

The Intel shape scored 17.41 FPS while Ampere scored 3.98 FPS. Still a wide gap, but the A1 shape really closed the chasm, more or less doubling performance while Intel gave up a little.

The OCI Ampere A1 shapes are really compelling. It’s easy to lock in on the pricing and be allured by the cost alone. But the cost is potentially meaningless without some degree of performance to go alongside. We set out to see if we could break the model by jumping right to an encoding workload that is pretty brutal.

Ultimately we might have been a bit harsh on the A1 shape, this particular workload is not gentle. The Intel and AMD shapes easily took command, but there is a cost for that performance. The AMD shapes are twice as expensive and the Intel shapes are about 4X that of the A1. 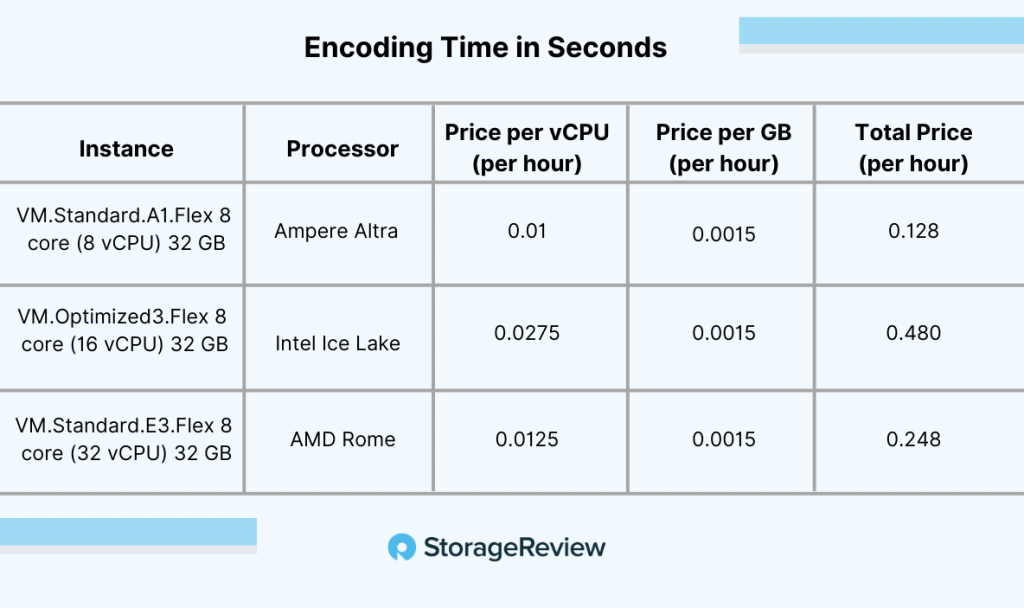 Another pricing point that’s worth considering. For those who want to play with Ampere A1, Oracle makes it easy. They offer Oracle Cloud Free Tier, which includes an always-free service that includes up to 4 instances of A1 Compute (four Ampere A1 cores and 24 GB memory), amongst other services. So in our pricing example, assuming usage of the free tier, our A1 cost is actually $0.052.

While our data is interesting, most organizations will want to check A1 out for themselves, with their own workloads. Some workloads will be really in tune with what ARM offers and there may be a cost-benefit to use A1 instead of the other shapes. And if you don’t want to use A1 for “productive use cases,” you can always run a free Minecraft server instead.

Ampere instances may not be for every workload, that’s clearly not Oracle’s assertion. What is clear though is that OCI is once again on the vanguard of unique cloud services, giving their customers a lot of choices. The A1 shapes have a lot of potential while offering a very inexpensive (or free) way to test out Oracle’s cloud.