The ZBook Studio G8 is one of the new models from the recently refreshed line of mobile workstations from HP, which also include the Power G8 (an entry-level workstation), the Firefly G8 (an ultra-portable 14-inch laptop), and the Fury G8 (a larger form-factor model with desktop-caliber performance). The Studio G8 is dubbed by HP as the most powerful of its size and class, featuring a 15.6-inch display, a generous amount of RAM, NVIDIA RTX professional graphics options, and a selection of 11th gen Intel processors.

The ZBook Studio G8 is one of the new models from the recently refreshed line of mobile workstations from HP, which also include the Power G8 (an entry-level workstation), the Firefly G8 (an ultra-portable 14-inch laptop), and the Fury G8 (a larger form-factor model with desktop-caliber performance). The Studio G8 is dubbed by HP as the most powerful of its size and class, featuring a 15.6-inch display, a generous amount of RAM, NVIDIA RTX professional graphics options, and a selection of 11th gen Intel processors. All of this makes it ideal for design professionals and engineers on the go who work with 3D rendering as well as consumers simply looking for a powerful laptop or gamers who need a portable solution with an RTX GPU. 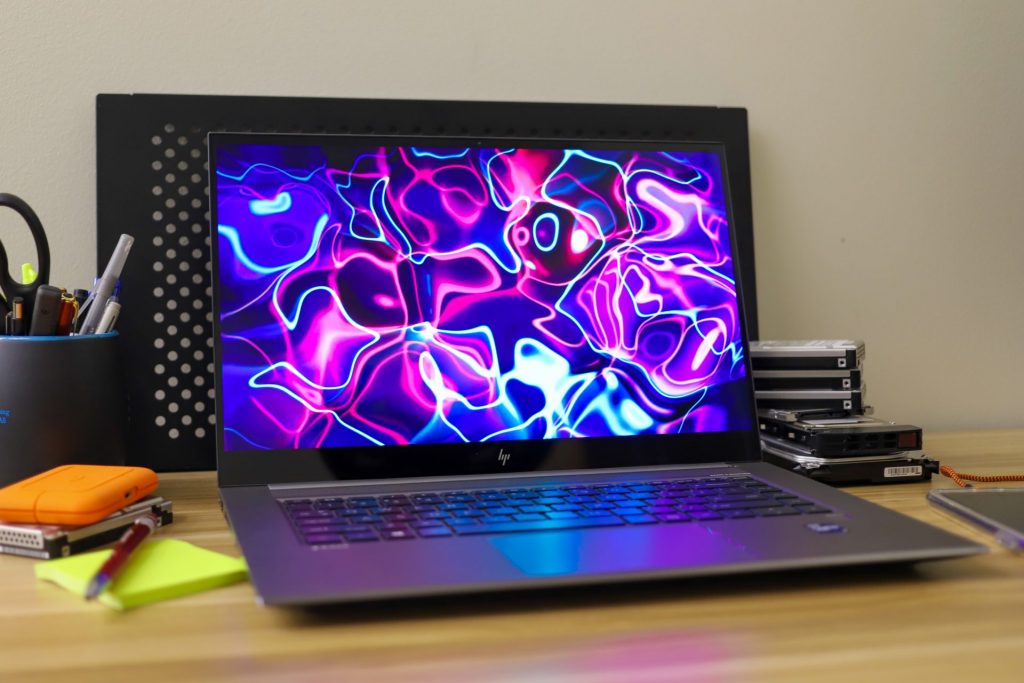 Though the standard model goes for over $2,000 dollars, it can be outfitted with a range of components to fit all kinds of budgets and performance needs.  For processing power, users have the option of 11th gen Intel Core i7 and or i9 CPUs, with the high-end configuration reaching an Intel Core i9-11950H (2.6 GHz-5.0 GHz with Intel Turbo Boost Technology, 24 MB L3 cache, 8 cores) that supports Intel vPro Technology. Users can pair this up to 32GB 3200MTs RAM, and a range of professional graphics cards, including the NVIDIA T1200 (4 GB GDDR6), NVIDIA RTX A2000 (4 GB GDDR6), or an NVIDIA RTX 3070 (8 GB GDDR6). Those looking to drive down costs or don’t need a high-end GPU to have the option of outfitting the Studio with an Intel Iris Xᵉ onboard graphics.

For storage, the Studio G8 can be equipped with the same drives as the other models from the ZBook line: starting at a 256GB NVMe SSD all the way up to a 2TB NVMe TLC NAND drive. Unlike the Power G8, the Studio G8 only has one drive slot.

The Studio G8 also comes in a range of display options, including 100% DCI-P3 coverage with DreamColor, a technology that HP developed alongside DreamWorks Studio. This is great for those who work in applications that rely on color-critical features due to its superior color accuracy and predictability. Having a great display like this in an ultra-portable form factor is fairly rare in the mobile workstation market.

The Studio G8 features the usual high-quality, all-aluminum “Turbo Silver” chassis, and is an overall nice-looking, durable mobile workstation. Starting at 3.96lb, the Studio sits roughly in the middle of the ZBook line as far as its weight goes; a bit lighter than the Power and about a pound heavier than the Firefly. 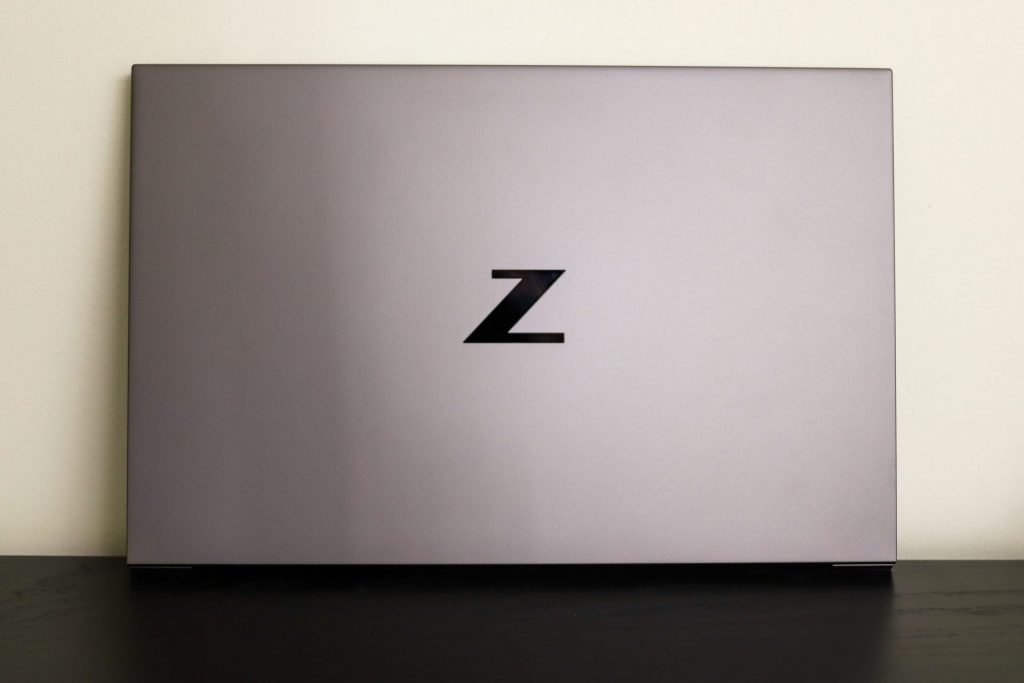 On the left side of the laptop is the main ventilation of the laptop, along with a headphone/microphone combo jack, a USB Type-A port (5Gbps rate/charging), and a nano security lock slot. 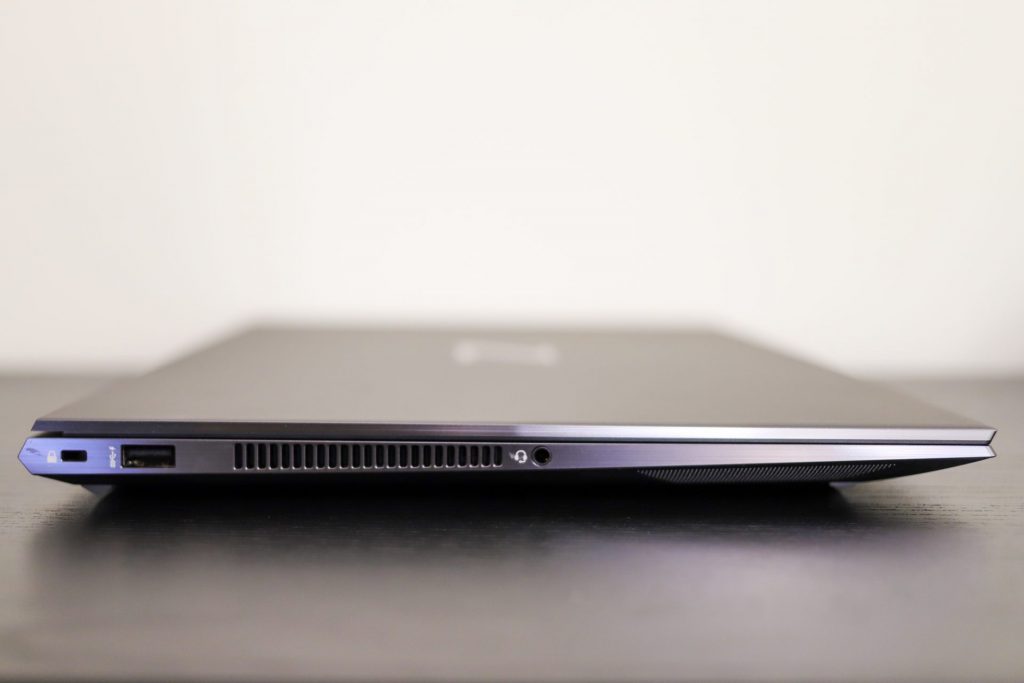 On the right side is the power connector, a Mini DisplayPort 1.4, two Thunderbolt 4 USB4 Type-C ports (40Gbps), and an HDMI 2.1 port (not part of our configuration, but the spec sheet indicates it is an option). One of the coolest features of the ZBook is the new RGB keyboard with per-key LED backlighting, which allows users to customize the colors and even highlight the keys they use the most. While it’s not a full keyboard like the Power G8, this is a really unique feature for a laptop and is something that gamers specifically would appreciate. In the dark, you can easily see the keys via a bright and beautiful set of colored LEDs. 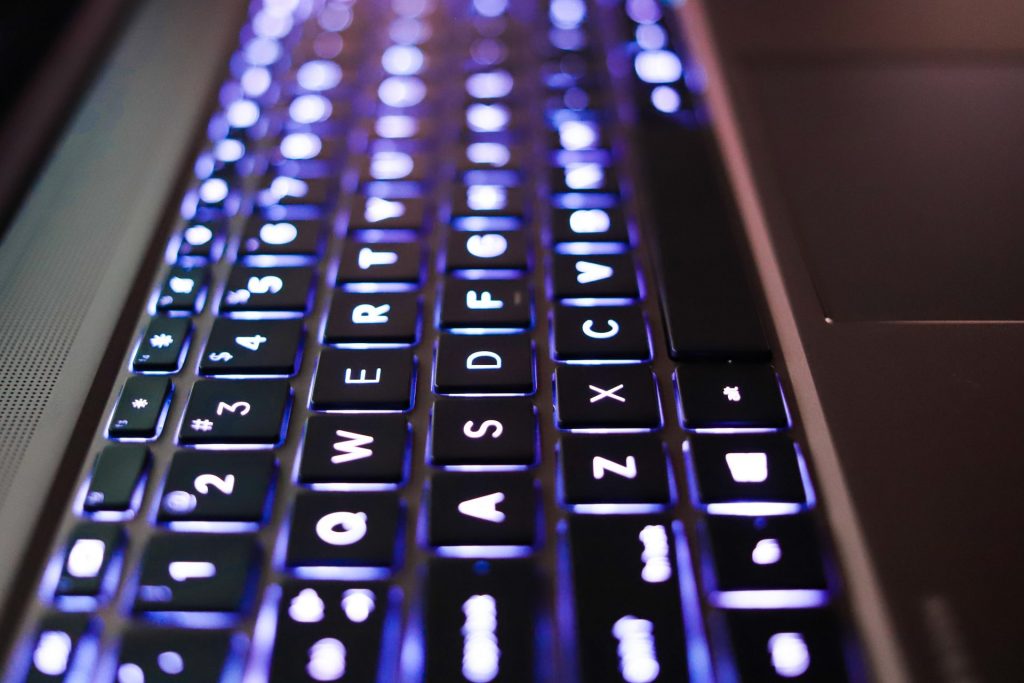 To gauge the performance of the Studio G8, we put it through a series of resource-intensive tests using the following build:

Our first test is PCMark10, a system benchmark for Windows PCs with a focus on modern office tasks. It offers a variety of workloads categorized into three groups. 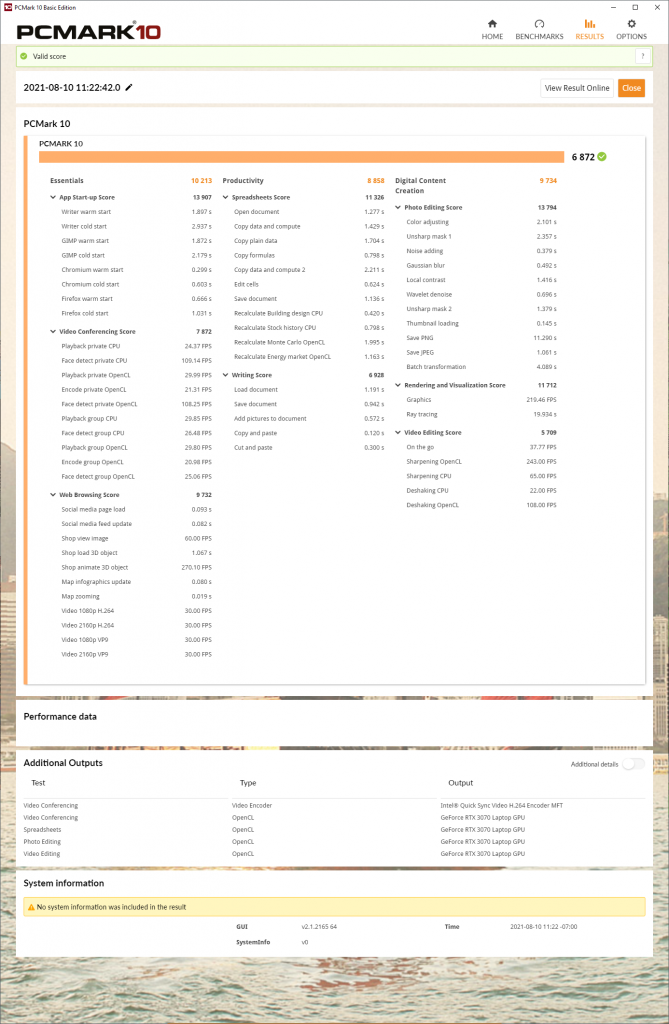 Numbers were well ahead of the Firefly and Power G8 due to Studio’s higher-end, more powerful GPU.

Here, the Studio and Power had similar results throughout, with the Power barely edging out the Studio is most of the categories with the exception of, unsurprisingly, the GPU Compute category.

Looking at the Montreal model, the ZBook Studio G8 posted an average and minimum FPS recorded 106.47 and 43.93, respectively.

Our last model is of Portland. Here, the new ZBook had an average FPS that showed 119.32 while the minimum FPS posted 94.65. Here, you can see the ZBook Studio with great results, showing numbers much better than the Firefly. This is undoubtedly due to the newer-gen and much better specced NVIDIA RTX A2000. 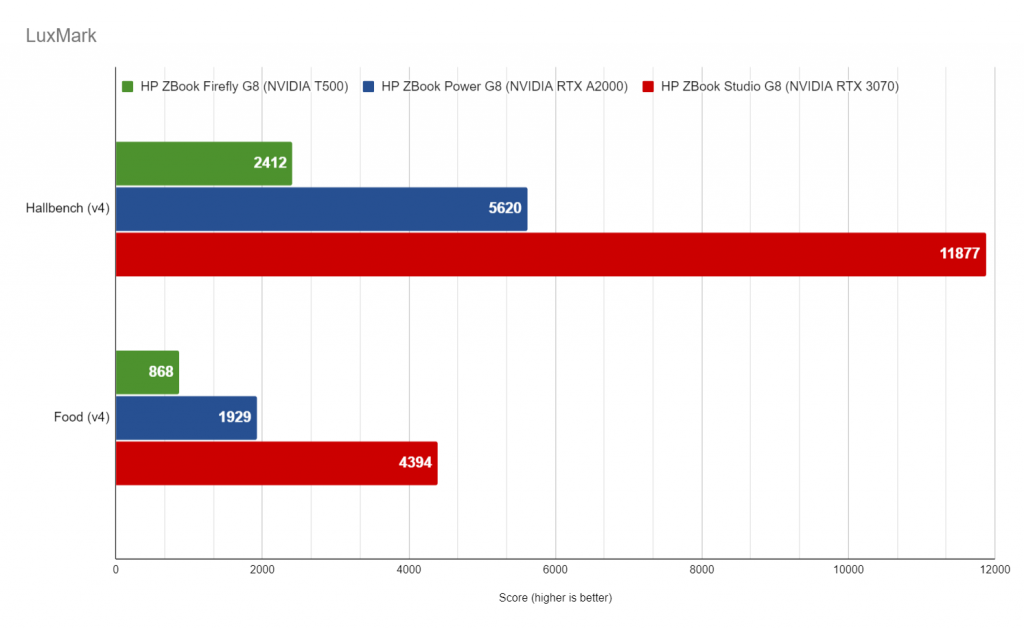 In the food rendering category, the ZBook Power scored 1,929 when equipped with the RTX 3070, while the Hallbench rendering category showed 5,620. These results once again demonstrated the difference in performance compared to the two generations and classes of NVIDIA GPUs.

Lastly, we look OctaneBench, a benchmarking utility for OctaneRender, which is another 3D renderer with RTX support that is similar to V-Ray. Here, the ZBook Studio had an overall score of 360.81. 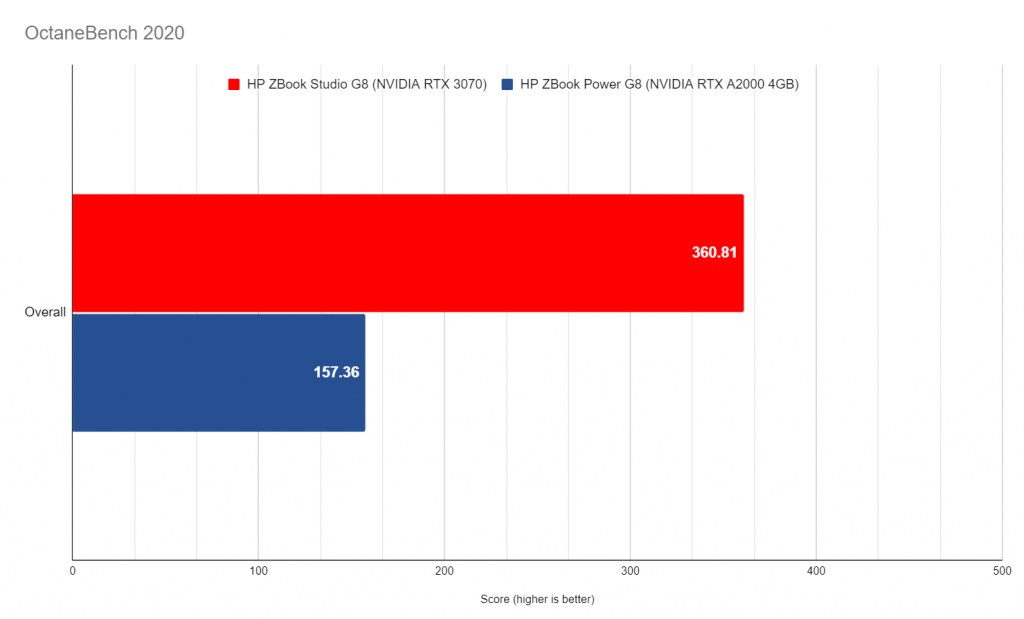 The HP ZBook Studio G8 is from the company’s newly refreshed line of professional mobile workstations released earlier this year. It joins models like the ZBook Power G8 and ZBook Firefly G8 as a unique offering that combines quality build, portability, and component customization, making it line ideal for a range of different needs for consumers, professionals and gamers.

The price tag for the Studio G8 starts at over $2K for the base model. However, it can be outfitted with higher-end components for more resource-demanding use cases, which will make the price quickly rise to over $5K. Available components include up to an 11th-generation 8-core Intel i9-11950H processor (2.6 GHz to 5.0 GHz) with three other options below (i9-11900H, i7-11800H, and i7-11850H). For memory, users can choose up to 32GB of DDR4 3200 RAM (down from the Power G8’s 64GB), while internal storage ranges from a 256GB PCIe TLC SSD up to a 2TB Gen4 PCIe NVMe TLC SSD. The spec sheet indicates only up to 512GB; however, when you customize the laptop using the HP store, you can choose a much higher-capacity SSD. That said, the Power G8 has an option for a second drive for a total of 4TB of NVMe storage and up to 64GB of RAM, which might be preferable for certain applications. For connectivity, the Studio G8 features the usual headphone/microphone combo jack, a USB Type-A port (5Gbps), two Thunderbolt 4 ports (USB4 Type-C at 40Gbps), a Mini DisplayPort 1.4, and an HDMI 2.1 port.

The Studio G8 has better GPU options than the other refreshed ZBook models we’ve reviewed, giving users the option to outfit workstation with either an Intel Iris Xᵉ on-board graphics, an NVIDIA T1200 (4 GB GDDR6), an NVIDIA RTX A2000 (4 GB GDDR6), or an NVIDIA RTX 3070 (8GB DDR6).  We certainly recommend choosing the NVIDIA RTX 3070 for those planning to use the workstation for high-end gaming as well as one of the non-integrated GPUs and higher-end CPUs for demanding professional software use cases.

Though it’s not the most powerful workstation out there, the HP ZBook Studio is a great choice for creative professionals, productivity-leaning consumers, and gamers. We particularly liked the HP DreamColor panel option (like we did with the Firefly G8), the customizable backlit RGB keyboard, its solid performance during our benchmarks, the usual quality ZBook build, and the range of important security features. Those who are willing to open up their wallets will also be able to create a fairly powerful mobile workstation to suit pretty much any consumer/professional need.