OCZ ARC 100 Series SSDs are designed for mainstream consumers who want the benefits of flash storage without a big price tag; the ARC 100 gives consumers an aggressive suggested price point of .50/GB. Of course as the SSDs get into retail, pricing will fall even further. OCZ doesn’t cut corners though with the ARC 100, part of the pricing power is due to the vertical integration with parent company Toshiba. Jointly they own all of the core components in the drive, including the controller and Toshiba MLC NAND. The ARC 100 offers a good endurance profile, supporting 20GB of writes per day (same as the Vertex 3) and the drives come with a three-year warranty.

OCZ ARC 100 Series SSDs are designed for mainstream consumers who want the benefits of flash storage without a big price tag; the ARC 100 gives consumers an aggressive suggested price point of .50/GB. Of course as the SSDs get into retail, pricing will fall even further. OCZ doesn’t cut corners though with the ARC 100, part of the pricing power is due to the vertical integration with parent company Toshiba. Jointly they own all of the core components in the drive, including the controller and Toshiba MLC NAND. The ARC 100 offers a good endurance profile, supporting 20GB of writes per day (same as the Vertex 3) and the drives come with a three-year warranty. 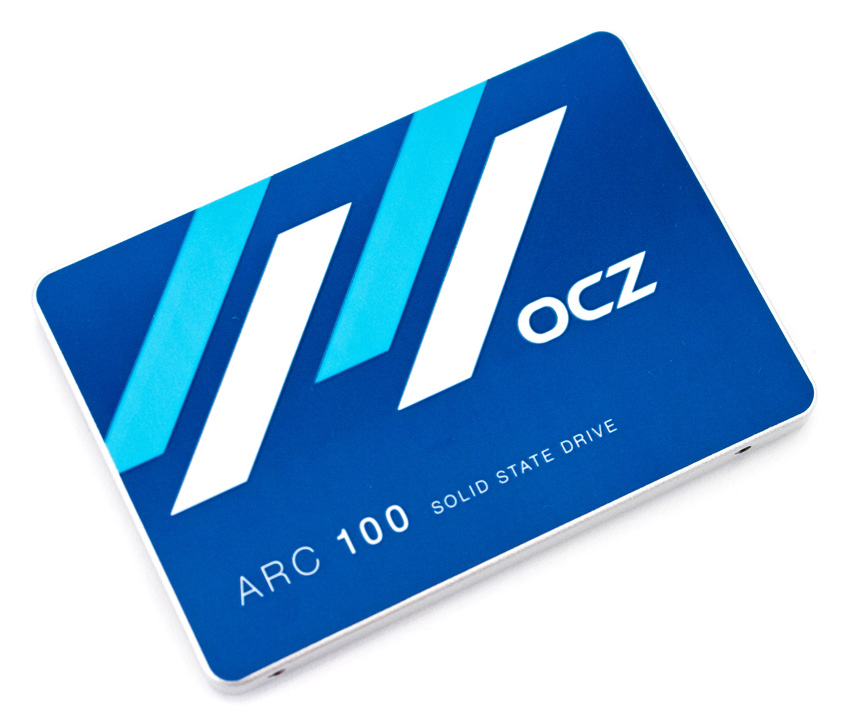 Looking deeper into its specs, the ARC 100 Series is the first OCZ drive to use Toshiba’s next generation A19nm NAND flash and features an in-house OCZ Barefoot 3 M10 controller and firmware. The body is an ultra slim 2.5-inch 7mm form factor that will fit almost any notebook; OCZ does not include a 3.5″ bracket with this drive. OCZ quotes read and write speeds up to 490MB/s and 450MB/s respectively for the 480GB capacity as well as random read and write throughout of 75,000 IOPS and 80,000 IOPS.

All ARC 100 SSDs ship with OCZ’s new ShieldPlus Warranty, which is designed to eliminate most of the hassle that consumers have to deal with when it comes to support and warranty claims. OCZ’s ShieldPlus Warranty requires no original proof of purchase; end-users simply need their ARC 100 SSD serial number and a customer service representative will provide troubleshooting and support. If it is deemed to be defective, a brand-new SSD will be shipped to the customer along with a pre-paid return label so users can return the original, defective drive for free.

The ARC 100 consists of an all-alloy build in an ultra slim form factor. The design of OCZ ARC 100 Series SSD is different from that of its predecessors with its all new blue and white color scheme (as opposed to the Vector 150‘s black, white and blue design). The front side has a very appealing look due to its minimalistic appearance, which only includes the name of the drive.

The backside has a standard information label, providing users with everything they need to know about the ARC 100, including serial numbers, model, PNs, and so on. Each side of the drive has two screw holes for easy mounting as well. 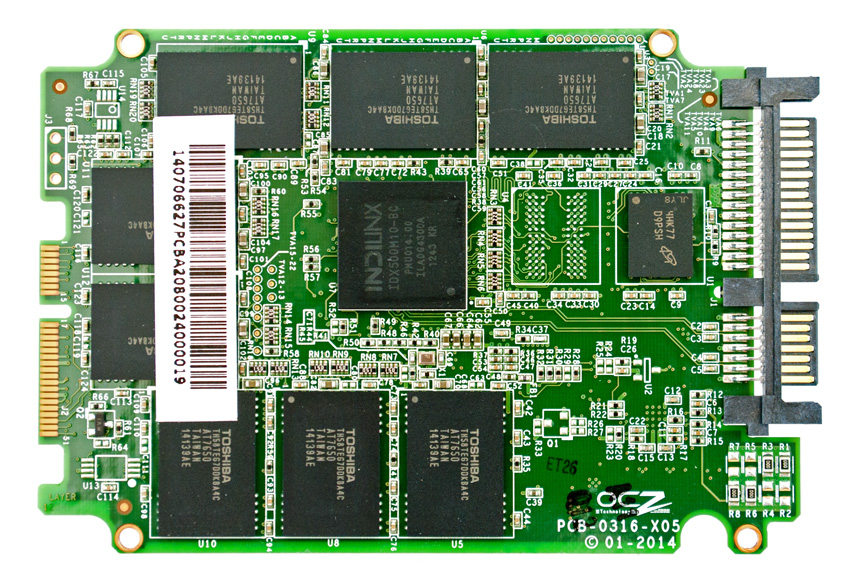 Its 7mm 2.5-inch form-factor allows the ARC 100 to be compatible inside virtually any type of platform; such as ultrabooks and embedded solutions. The front of the SSD has a standard SATA power and data interface. 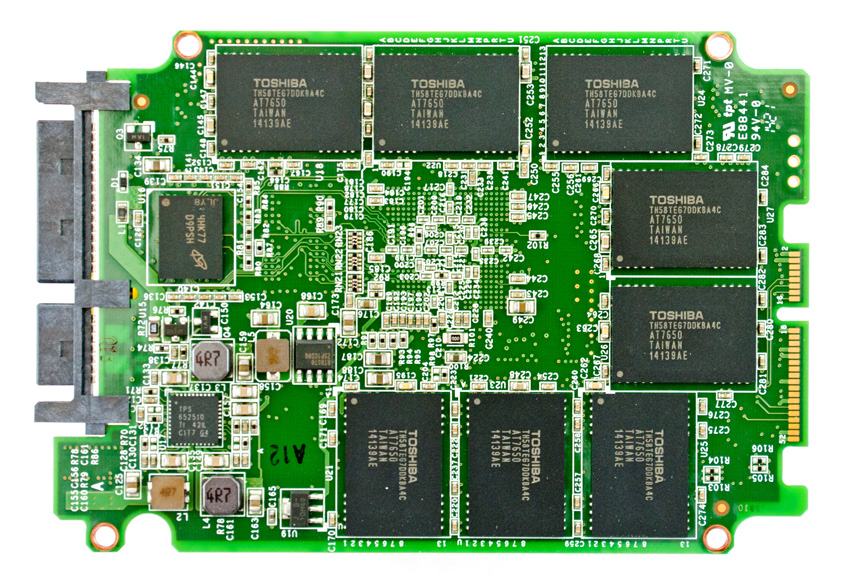 Once you open up the drive via the four Phillips head screws, you will see the OCZ Barefoot 3 M10 controller and Toshiba A19nm MLC NAND at the heart of the ARC 100.

All consumer SSD benchmarks are conducted with the StorageReview Consumer Testing Platform. The comparables used for the OCZ ARC 100 Series SSD review include:

In our first test measuring 2MB sequential performance, the OCZ ARC 100 posted 448.7MB/s read and 392.0MB/s write, which ranks near the back.

Our next test looks at 2MB random transfer performance. Here, the OCZ ARC 100 scored 397.6MB/s read and 390MB/s write, ranking at the bottom and middle, respectively, among its comparables.

When moving on to our smaller 4K random transfers test, the OCZ ARC 100 measured 6,661 IOPS read at QD1, which ranked  near the middle of the standing as well as a write speed of 21,979 IOPS, which was 2nd among our rankings. 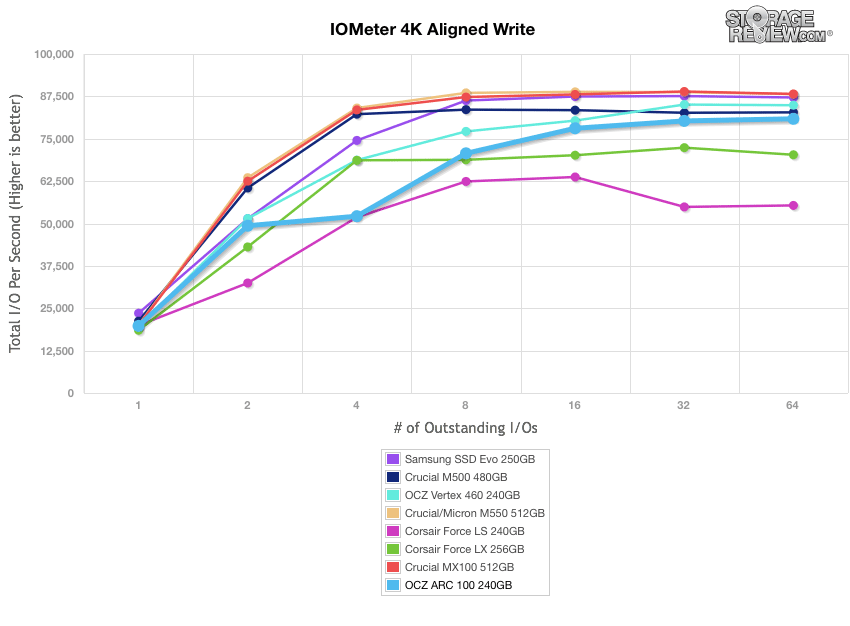 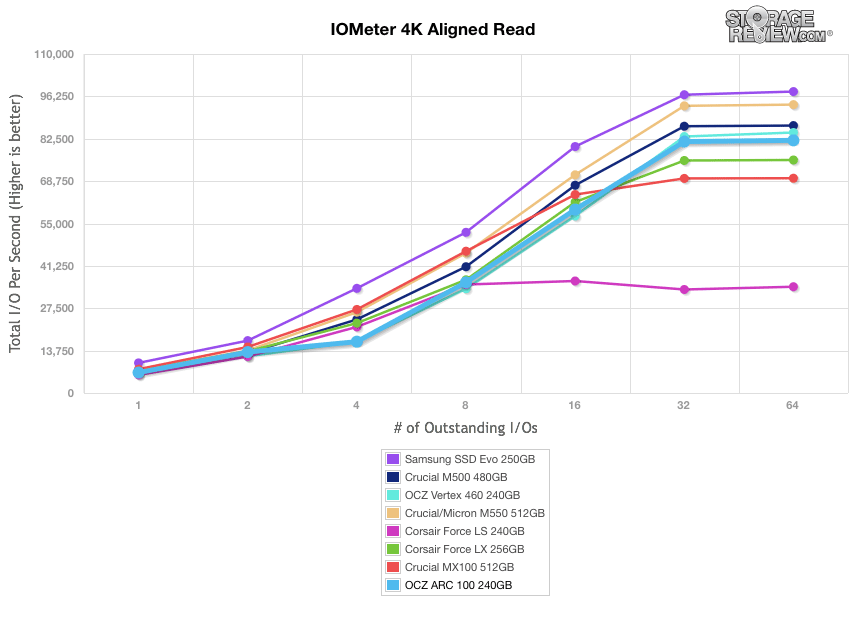 Next, we compare the ARC 100’s average write latency to each mainstream/value consumer SSD. Here it placed very well among the comparables with an average latency of 0.045ms and a fairly low peak latency of 2.76ms. 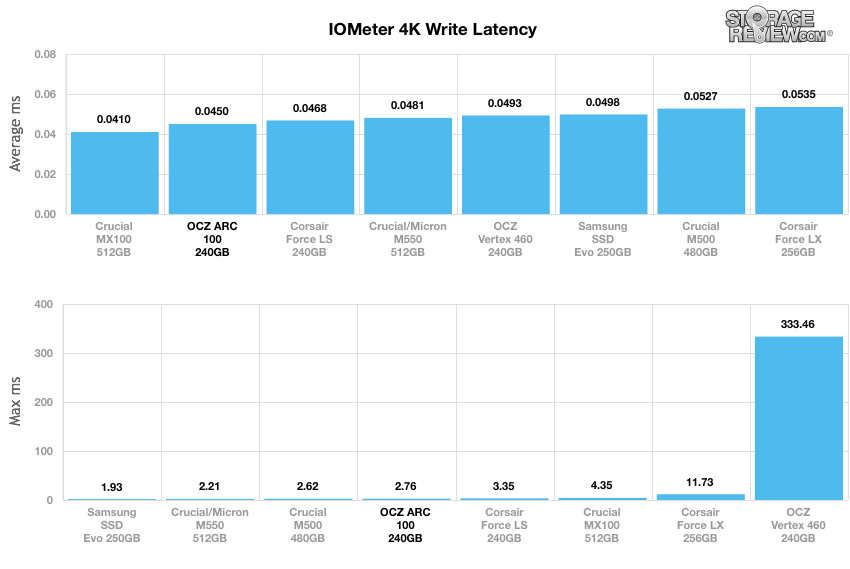 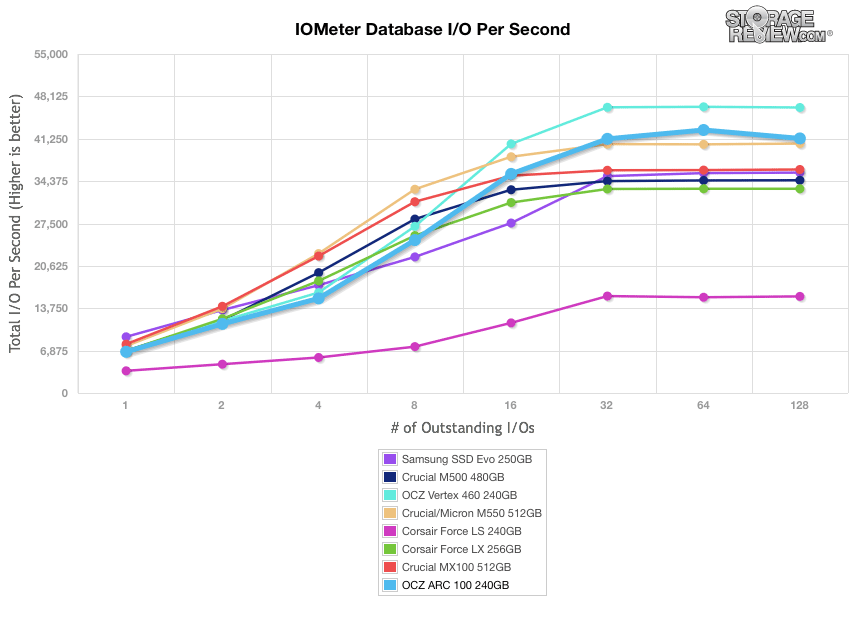 In our a file server, which has a 80% read and 20% write workload spread out over multiple transfer sizes ranging from 512-byte to 64KB, the OCZ ARC 100 came in 3rd place. 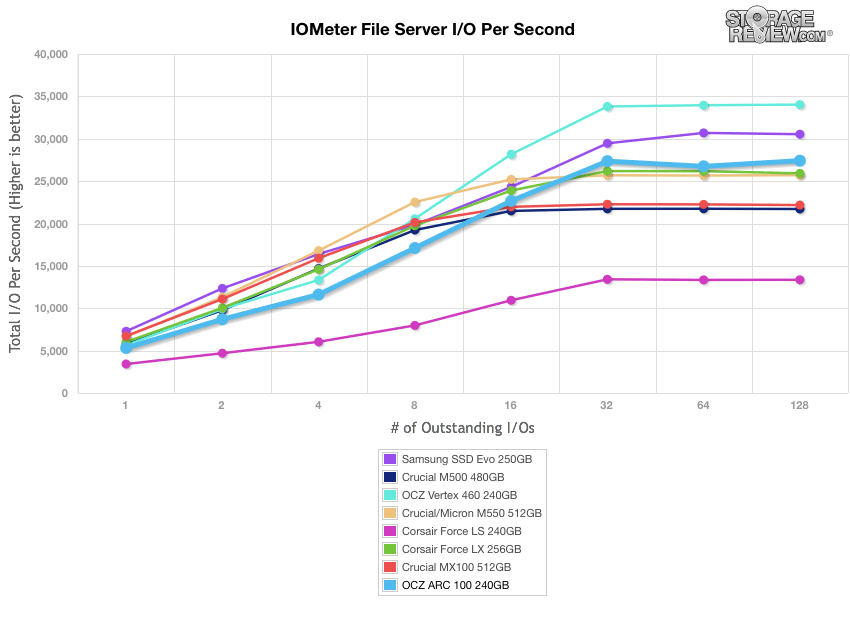 Our web server profile is read-only with a spread of transfer sizes from 512-byte to 512KB. Here, the OCZ ARC 100 took 3rd place again. 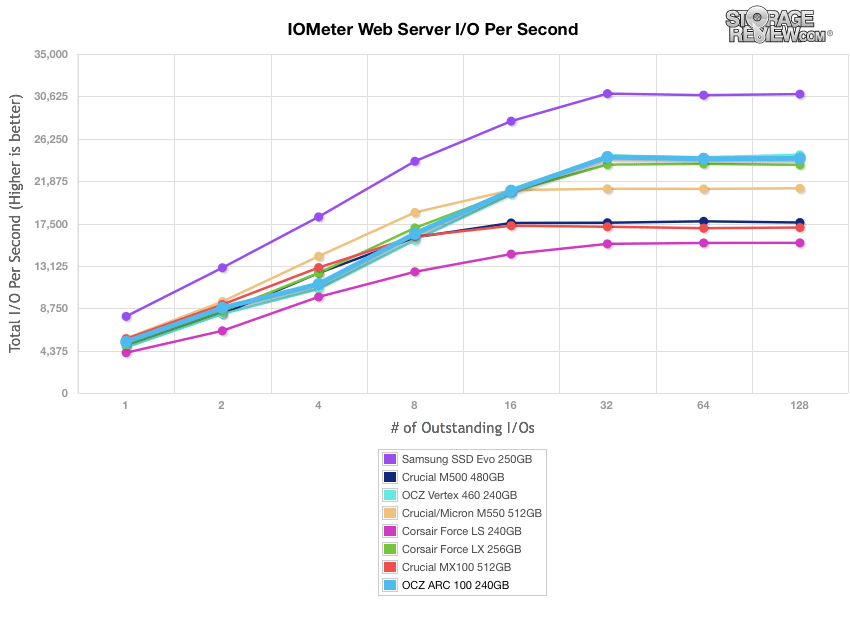 The last profile looks at workstation activity, with a 20% write and 80% read mixture using 8K transfers. The OCZ ARC 100 continued to fair very well, placing near the top of the leaderboard with 44,328 IOPS at QD128. 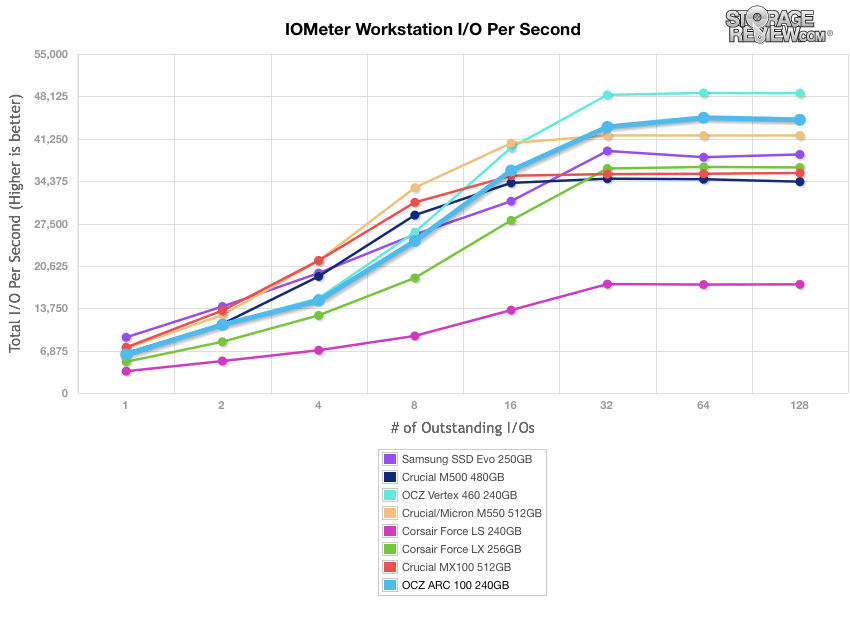 In our Productivity trace, though it showed a slight improvement, the OCZ ARC 100 posted sub-par results with an average speed of 139.0MB/s and IOPS of 4,745. 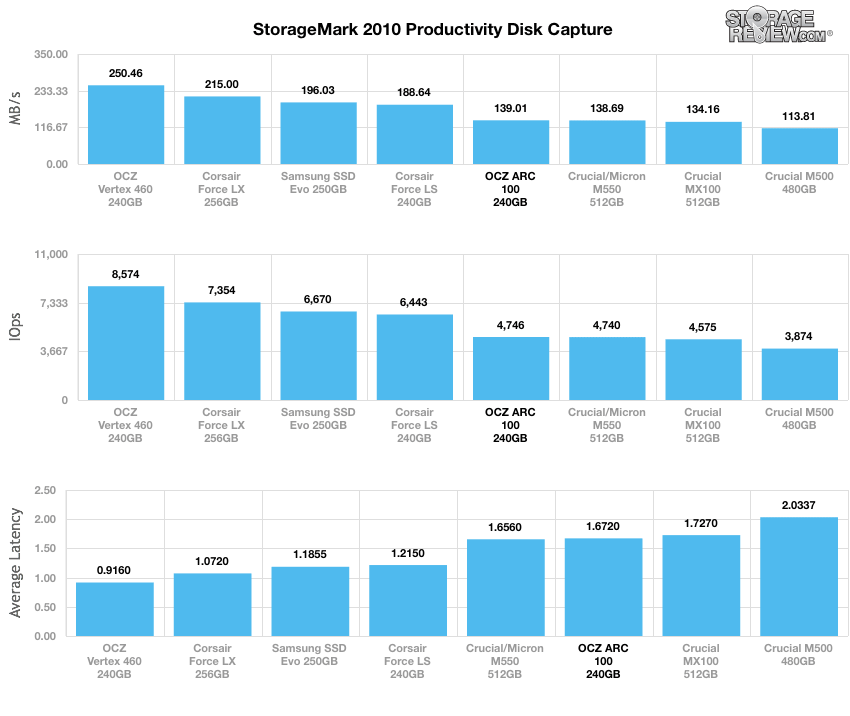 In our read-intensive Gaming trace, the OCZ ARC performed similar to the other profiles with a speed of 430MB/s. Low idle power consumption is very important when it comes to SSD power management, as consumer-grade SSDs spend much of time in an idle state. The ARC 100 is quoted by OCZ as having an idle reading of 0.6W and an active consumption of 3.45W.

In our tests, we measured idle power consumption from the OCZ ARC 100 at 0.61 watts, with a highest measured total at 3.35 watts, which took place during write activity. These readings were in-line to what OCZ quoted.

The OCZ ARC 100 is designed for mainstream consumers looking to gain all the benefits of flash storage with a value-oriented SSD. It is equipped with SATA 6Gb/s, the OCZ Barefoot 3 M10SS9189 controller, and is the first OCZ drive to feature Toshiba’s A19nm MLC Flash. Its ultra slim 2.5-inch, 7mm form factor allows it to fit in virtually any type of device as well as its competitive pricing make it a compelling choice for anyone who’s looking to upgrade from an HDD-based system to a solid-state rig.

As far as performance goes, the OCZ ARC 100 posted mixed results throughout our tested categories, though this was expected for this class of SSD. In our consumer workloads, it generally performed below par when it came to our single 4K and 2MB transfer benchmarks; however, it picked up in our 100% read/write-intensive tests. When we put it through our synthetic workloads, the OCZ ARC 100 performed much better, placing among the top three drives in each of our profiles. The consumer real-world benchmarks is where it showed the weakest performance of our gauntlet of tests, posting results that placed the drive at the bottom of the pack in all three profiles; sometimes by a noticeable margin.

When it comes down to it however, the performance of the ARC 100 are well in line with its affordable price and target demographic and OCZ was clear and up front as to where it fits in the SSD market. You really can’t go wrong with its $75, $120, and $240 price tag for the 120GB, 240GB, 480GB respectively, which is a $0.50/GB ratio for the two highest capacities. And that’s just the starting point, as these drives get into market, the price will come down even further, making the OCZ drive a viable option in the congested value market. For those considering moving from an HDD, the ARC 100 will still offer night and day performance gains to go with power savings and the other classic SSD benefits. The drive also comes with the new no-nonsense ShieldPlus Warranty plan, making it easy to own as well.

The OCZ ARC 100 offers the benefits of an SSD with an aggressive price point making it an attractive option for mainstream users looking to upgrade an HDD-based system.