OCZ’s mSATA SSDs have long been used in OEM and other specialized applications. mSATA SSDs are finding a much wider audience now though, as notebook, tablet and even desktop PC vendors are finding creative ways to use the diminutive in size, but not speed, SSDs. Whether used as a boot drive, primary storage or caching mechanism, the OCZ Nocti has quite a bit of flexibility. Available in capacities from 30GB to 120GB, the Nocti offers top-end performance of up to 280 MB/s read speeds, 260 MB/s writes and random write 4K IOPS of 32,500, essentially saturating the mSATA 3Gb/s interface speed.

OCZ’s mSATA SSDs have long been used in OEM and other specialized applications. mSATA SSDs are finding a much wider audience now though, as notebook, tablet and even desktop PC vendors are finding creative ways to use the diminutive in size, but not speed, SSDs. Whether used as a boot drive, primary storage or caching mechanism, the OCZ Nocti has quite a bit of flexibility. Available in capacities from 30GB to 120GB, the Nocti offers top-end performance of up to 280 MB/s read speeds, 260 MB/s writes and random write 4K IOPS of 32,500, essentially saturating the mSATA 3Gb/s interface speed.

The OCZ Nocti is built around the SandForce SF-2181 processor and OCZ-branded 2Xnm MLC NAND and is meant for both use with OEMs and for enthusiast upgrades. The Nocti is available in 30GB, 60GB and 120GB capacities with street prices of $75, $130 and $230 respectively, and the SSDs carry a three year warranty. OCZ offers other mSATA SSDs as well, the Devena 2 mSATA SSD is designed for OEM duty, while the OCZ Strata mSATA SSD was a lower-cost alternative based on an Indilinx controller that has recently been discontinued. 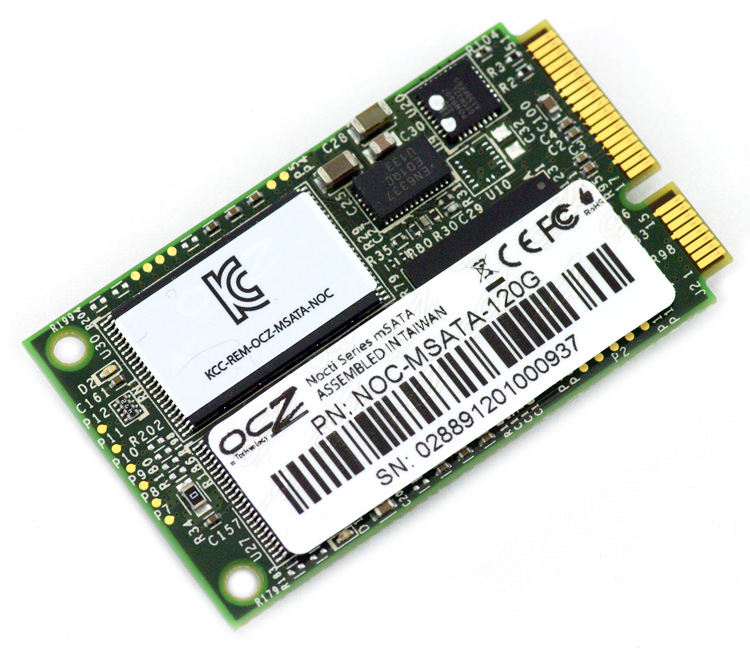 The OCZ Nocti mSATA SSD doesn’t put any room to waste with its compact size. Measuring just 30mm x 50mm, this card is designed to fit inside the mSATA/mini-PCIe slots inside notebooks and some desktop motherboards to be used as a boot/cache drive. In notebooks such as the ThinkPad X220, ThinkPad T520, or ThinkPad W520 using an mSATA SSD leaves the primary 2.5-inch bay open for bulk storage. 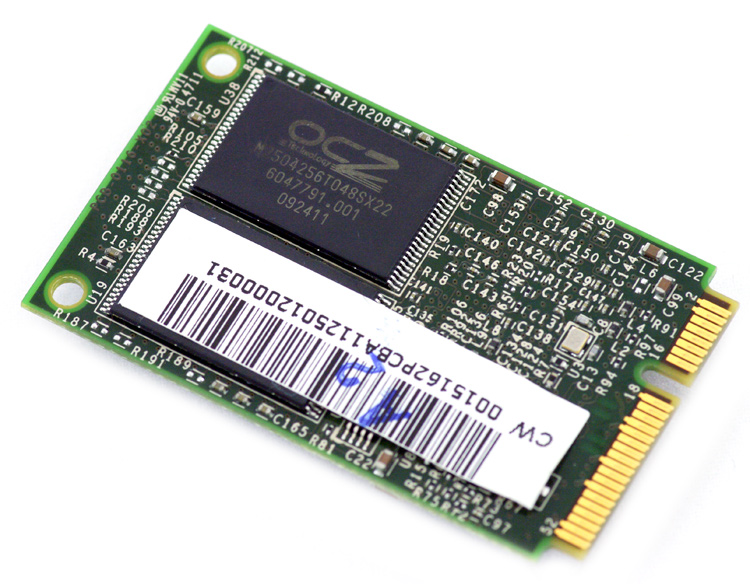 At the heart of the Nocti mSATA SSD is a SandForce SF-2181 processor. It is a SATA 3.0Gb/s model, unlike its SF-2200 brother which interfaces at SATA 6.0Gb/s speeds. The primary reason for this, besides cost, is that many mSATA deployments are limited to SATA 3.0Gb/s speeds. 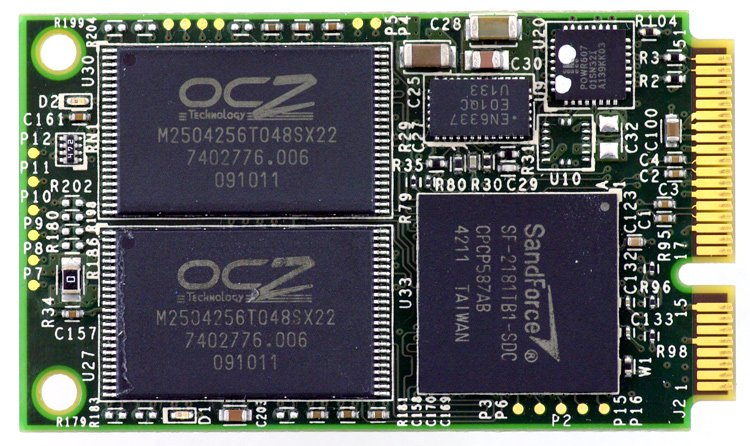 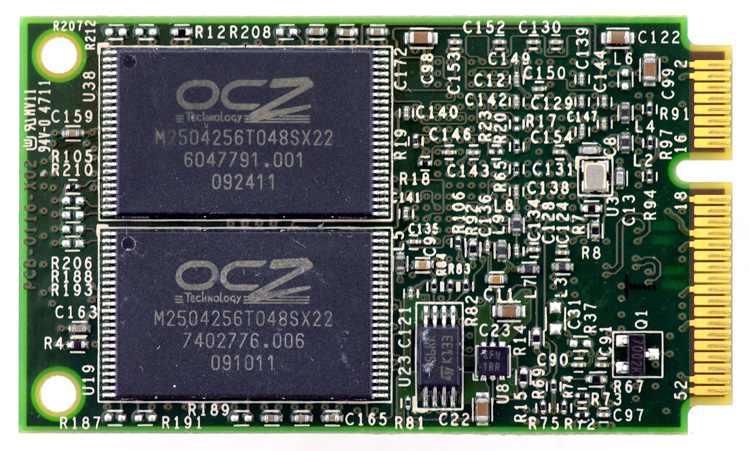 The Nocti uses four OCZ-branded 32GB (256Gb) 2xnm NAND pieces. OCZ branded NAND isn’t new, OCZ announced in October of last year that they had secured a bulk NAND buy as part of their plan to reduce overall drive costs, as well as extend the OCZ brand throughout certain SSDs. We saw the use of OCZ branded NAND in the OCZ RevoDrive Hybrid and suspect OCZ will use more of their own stamped NAND over time.

In our review of the 120GB OCZ Nocti, we show benchmarks against the 80GB Intel SSD 310, which uses an Intel controller, and the 120GB Renice X3 mSATA SSD, which is based on the prior-generation SandForce SF-1200 platform.

For the 120GB Nocti capacity, OCZ lists a peak read speed of 280MB/s and a write speed of 260MB/s. To put these claims to the test, we used our 2MB sequential transfer test in IOMeter.

While the Nocti showed some weakness in fast throughput speeds compared to the older generation Renice X3 with 3xnm NAND, it offered much faster QD=1 4K random write speeds, topping at 18,313 IOPS with incompressible data.

In our 4K write latency test, which measures access times at a queue depth of 1, the OCZ Nocti scored very well with average response times of 0.0541ms with incompressible data and 0.0572ms with compressible data. Peak latency times were also excellent, measuring 32.74ms and 35.7ms for repeating and randomized respectively. 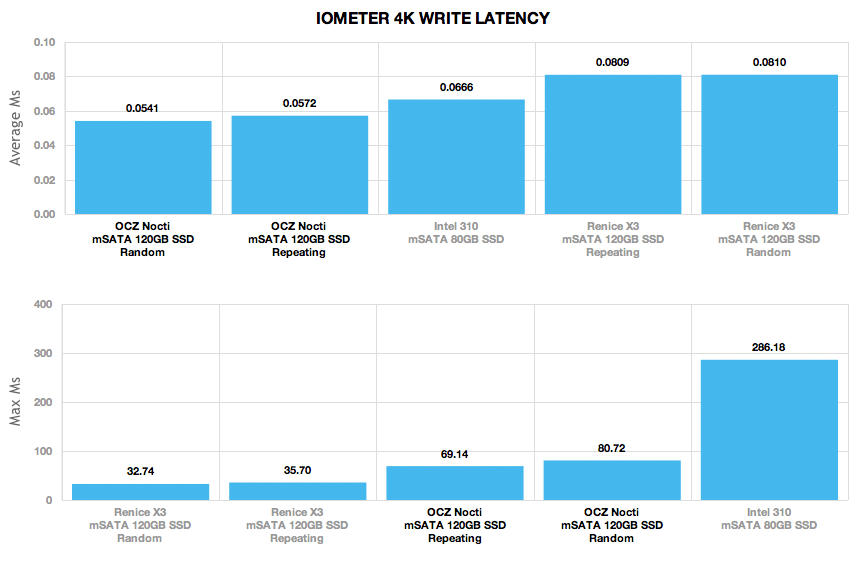 Using CrystalDiskMark with randomized data, we noted similar read and write speeds as what we found with our incompressible IOMeter testing, although CDM did give slightly higher write speed figures. 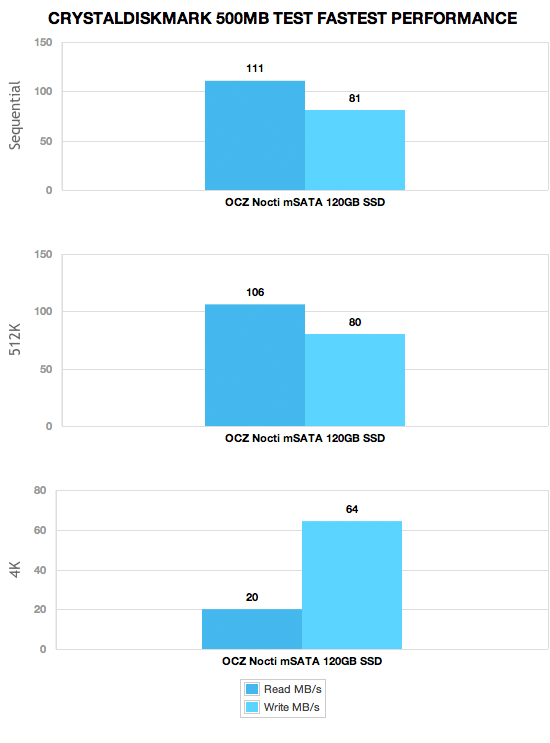 Our last group of consumer IOMeter synthetic benchmarks looks at mixed-load server profiles including Database, Workstation, File Server, and Webserver. Looking at the performance of the OCZ Nocti with repeating data, it scored above the Intel SSD 310 but below the Renice X3. 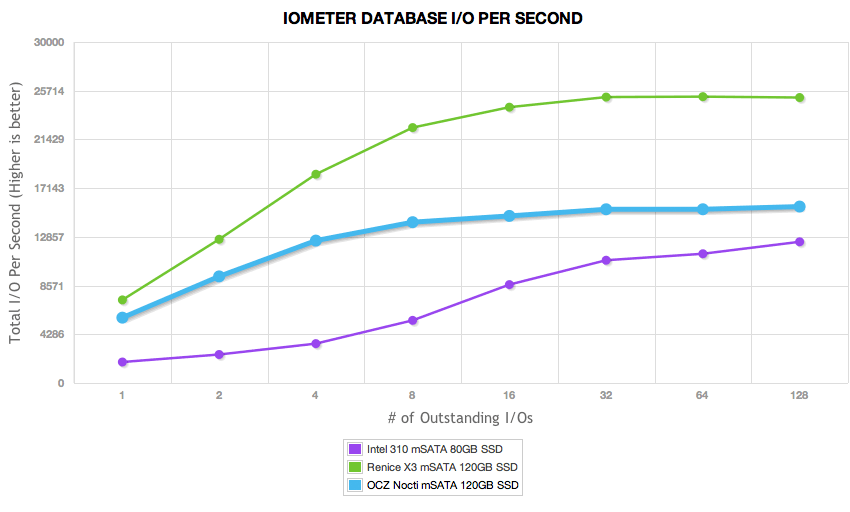 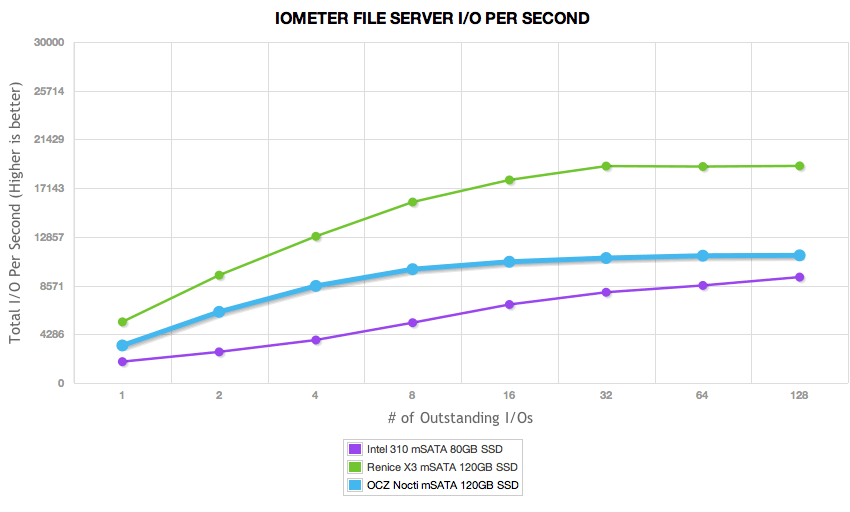 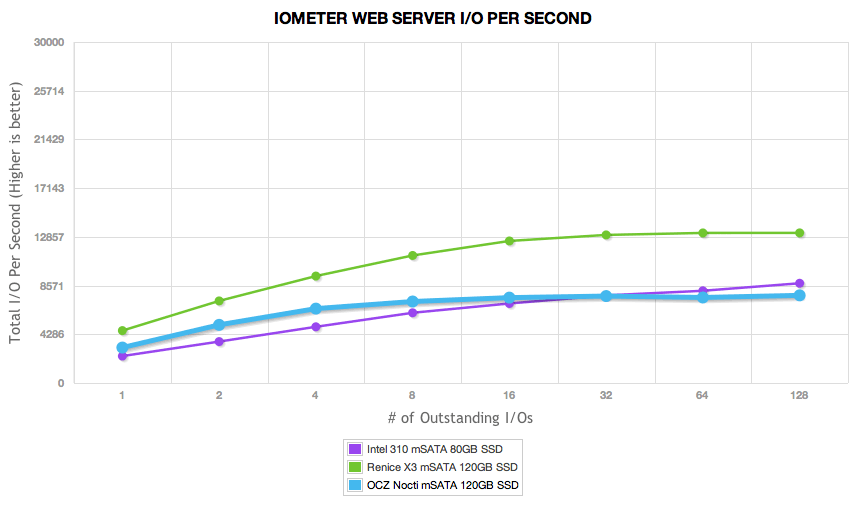 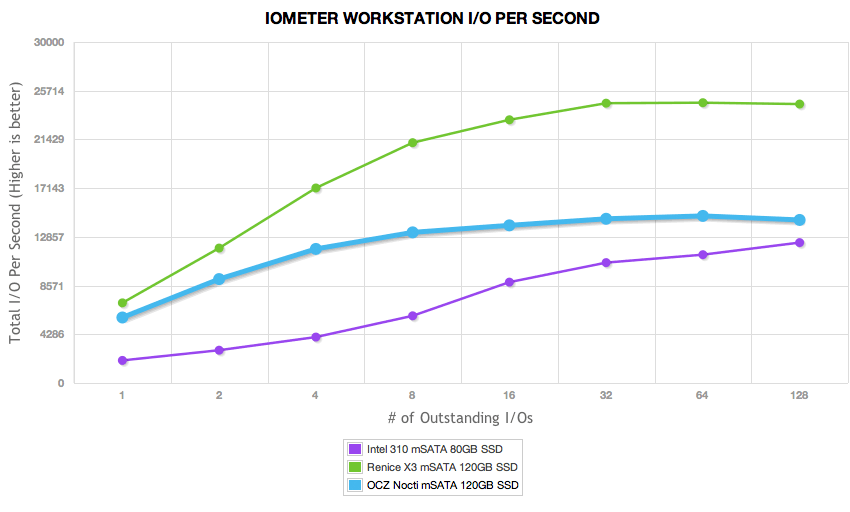 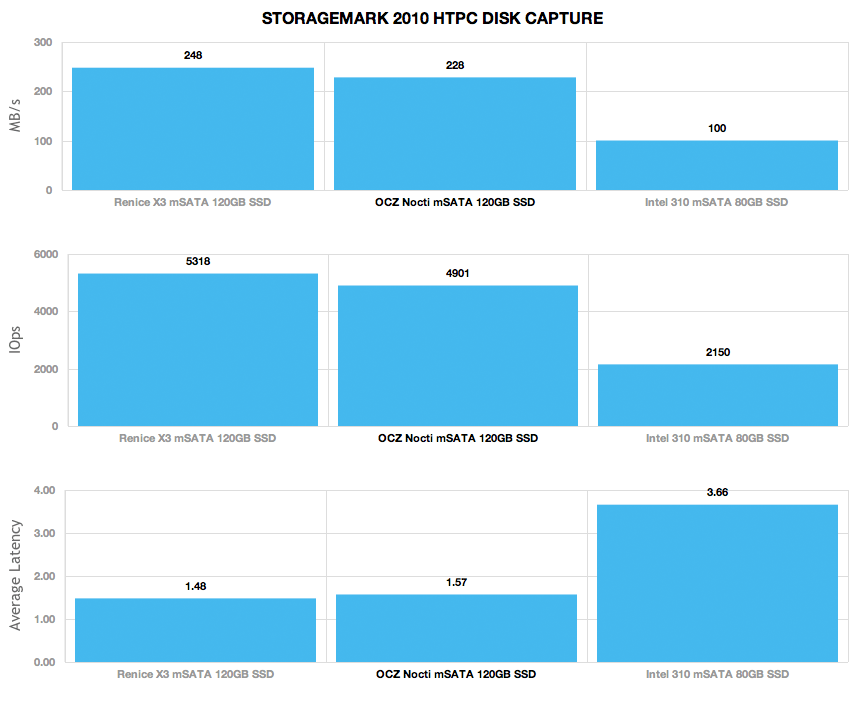 In a HTPC environment the OCZ Nocti slipped behind the Renice X3 slightly, but offered a massive boost in performance over the Intel mSATA SSD. 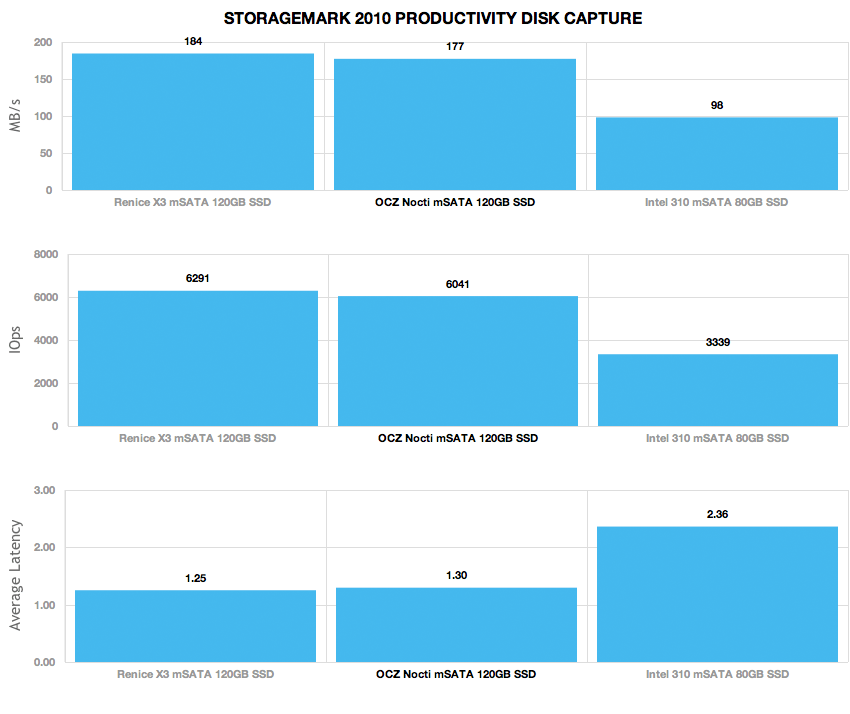 In our productivity trace, both the X3 and Nocti offered similar performance. Both drives far surpassed the Intel mSATA SSD. 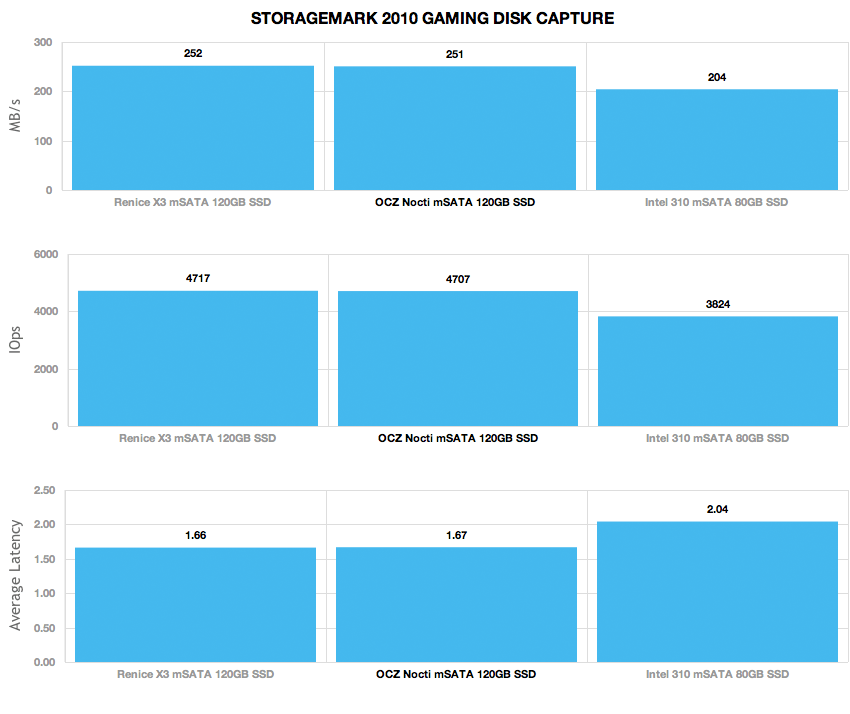 In a read-intensive gaming environment, both SandForce-powered mSATA SSDs scored above 250MB/s average. The gap between these and the Intel mSATA SSD narrowed though, with the Intel measuring 204MB/s average.

OCZ listed an active power rate of 1.7W and an idle 0.5W. We measured above to the idle power rate through our interposer card with a measurement of 0.71 watts and our active tests ranged from 2 watts up to 2.95 watts with a constant 2MB sequential transfer of incompressible data.

The OCZ Nocti mSATA SSD does its intended job very well, delivering just about all the mSATA 3 Gb/s interface can handle with large sequential reads and writes, though it does struggle a bit with large-block transfers turning from compressible to incompressible data. On the random 4K side the Nocti posts very impressive write scores, easily besting the other mSATA comparables by a wide margin. The drive’s 4K latency is also the lowest in the group and the Nocti held up very well across the board in our real world traces.

For the enthusiast who wants to upgrade their system with an mSATA SSD, there are few options. This isn’t necessarily a bad thing though, as the Nocti provides an excellent blend of performance and price, along with the fact that it’s generally available in retail, where many boutique mSATA solutions are not. When we look at the Nocti head-to-head against the mainstream Intel SSD 310, the Nocti dominates on price, performance and capacity options.

The OCZ Nocti mSATA SSD comes in capacities up to 120GB and delivers in two key areas – price and performance. In the mSATA space there aren’t many generally available options, but thankfully the Nocti is one of them. Those looking to take advantage of an mSATA SSD for caching, boot or the like will find the OCZ Nocti to be a worthy companion.