OCZ updated the firmware on their Indilinx-powered Octane SSD to v1.13 last week, touting significant increases in random 4K write performance. On the lower capacity models the gains are quoted to jump over 100%, with advertised speeds increasing from 7,700 IOPS to 18,000 IOPs. Percentage gains taper off as capacity climbs, with the 512GB model getting bumped from 16,000 IOPS to 26,000 IOPS. The firmware release also likely addresses minor compatibility and stability issues.

OCZ updated the firmware on their Indilinx-powered Octane SSD to v1.13 last week, touting significant increases in random 4K write performance. On the lower capacity models the gains are quoted to jump over 100%, with advertised speeds increasing from 7,700 IOPS to 18,000 IOPs. Percentage gains taper off as capacity climbs, with the 512GB model getting bumped from 16,000 IOPS to 26,000 IOPS. The firmware release also likely addresses minor compatibility and stability issues.

As we’ve mentioned before, SSD manufacturers who either own their NAND fabs and/or SSD controllers or have extensive engineering teams, have an inherent advantage in the battle for SSD market share as they typically have both better reliability and compatibility and in the event of a problem, they can generally be more quick to respond. The benefit of having their own in house Everest platform gives OCZ an opportunity to be a bit more nimble with the Octane, adjusting firmware to suit customer demand. OCZ has clearly tweaked for random 4K write performance, but that’s just one specific workload that doesn’t show the entire picture of this firmware update. We dive into all aspects of the new firmware as applied to 128GB Octane and 512GB Octane SSDs. 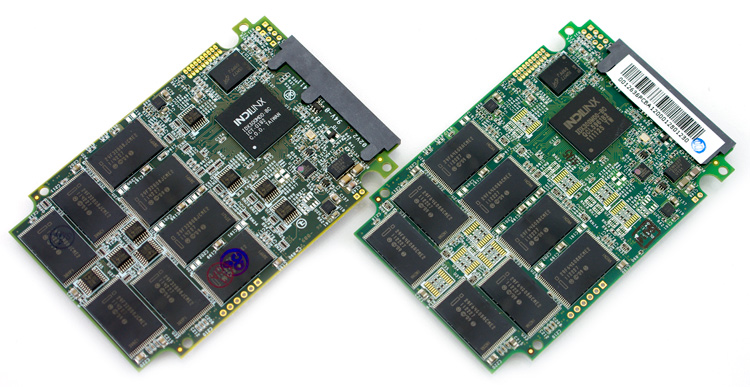 To avoid repetition, take a look at our original review of the OCZ Octane for background information including specs and aesthetics. As to the firmware, little is known about it apart from changes to random 4K write performance and that it is a destructive update. Basically if you update to this firmware, unlike most firmware updates, your data will be erased… so it is more important than ever to make a full backup before you upgrade your SSD. We cover how to update the firmware on OCZ SSDs in this guide, which walks you through the process of using the OCZ Toolbox.

Our first test centers around large-block sequential transfers, similar to moving a movie between drives.

Starting with the 128GB capacity, the Octane SSD saw a small drop in average read speeds, but got a healthy boost in write speed going from 159MB/s to 184MB/s. The 512GB model saw drops in both read and write speeds, with write speeds going from 374MB/s down to 292MB/s.

Next we look at random traffic, keeping the same 2MB block-size, but accessing the SSD from random NAND segments.

The next group of tests looks at 4K random read and write speed, which is the bread and butter of SSDs. With no moving mechanical parts, they are able to move very small files across random parts of the drive surface at incredible speed. This first test we look at the performance at a queue depth of 1, which would be like one activity taking place at a time. Later we expand out into higher queue depths which would be like multiple programs requesting data at the same time.

With smaller random transfers you start to see the area that OCZ tweaked the most with the v1.13 firmware on the Octane SSDs. Both drives saw significant boosts in 4K random write speeds, even at a queue depth of one. The 128GB capacity nearly doubled its speed at this level, while the 512GB model increased from 11,332 IOPS to 12,864 IOPS. Looking at read speed the 512GB model improved slightly while the 128GB model took a small hit.

In this next chart we expand the 4K read and write performance out to a queue depth of 64.

At the higher queue depths we can see that both capacities took a small 4K read hit compared to their original firmware versions.

As a function of write speed, write latency is a measurement of the average response time needed to finish a task, with the max latency being the maximum amount of time required over the duration of the test. 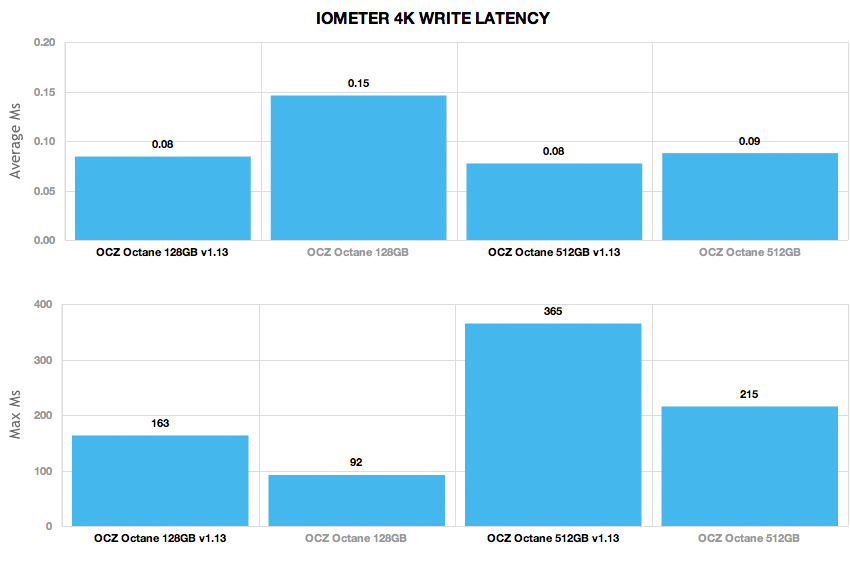 Given both capacities saw improvements in random write speed, both of their average response times lowered. The 128GB model with its massive increase in 4K write speed saw the biggest change, going from 0.15ms down to 0.08, matching the 512GB model at a queue depth of 1. Looking at maximum lantecy though, both drives saw maximum times increase by 70-80%.

While the synthetic benchmarks we covered in this quick review looked at specific single workloads, our real-world traces cover a mixture of read and write patterns. In many cases these show a better overall picture of minute or significant changes in drives after firmware changes. 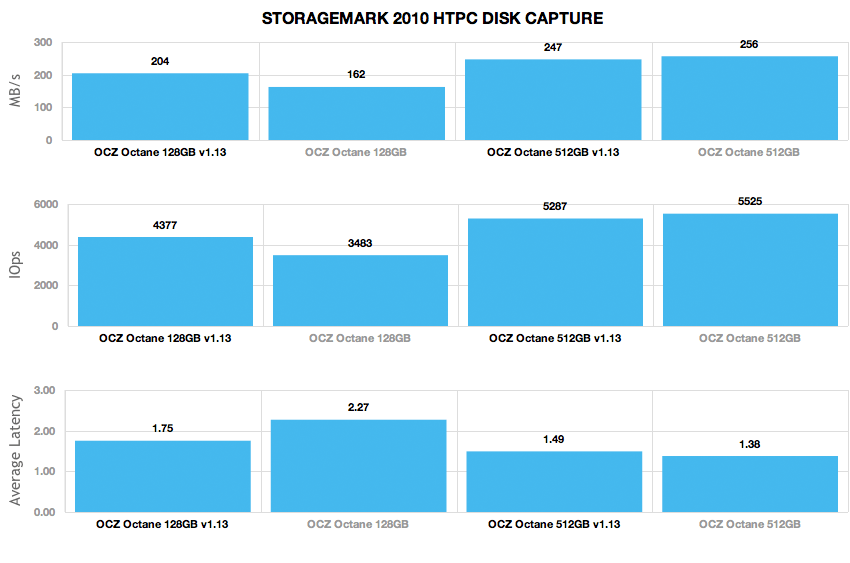 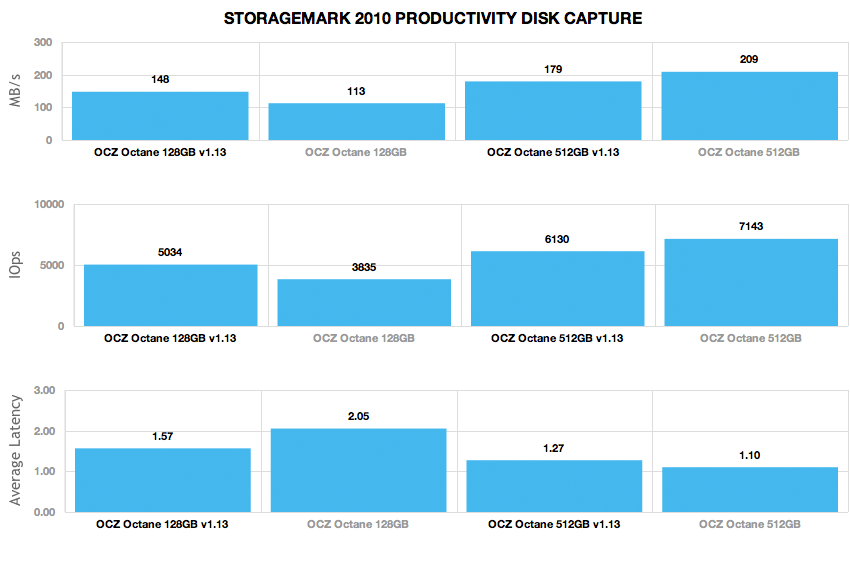 The 128GB Octane got another big boost in performance measuring 31.2% in our productivity trace, while the 512GB Octane saw a drop of 14.2% 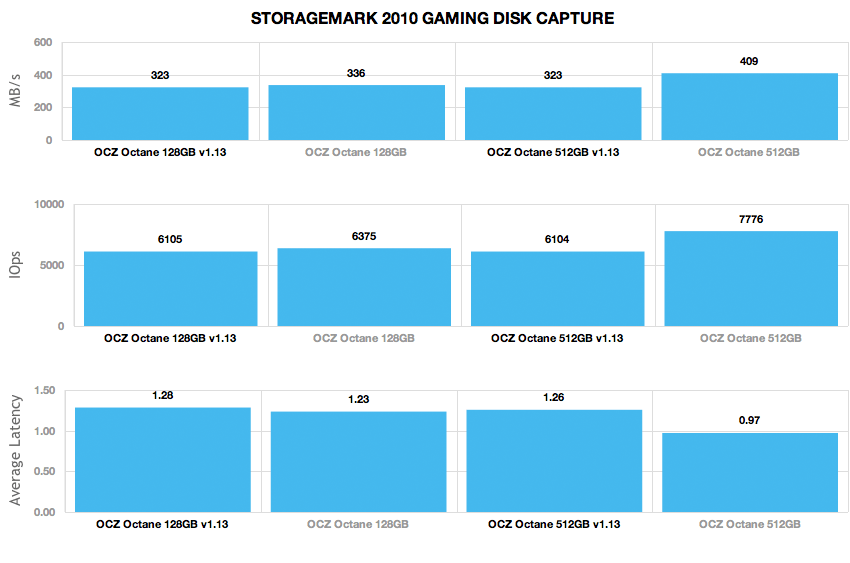 With our gaming trace centered heavily around read-activity and seeing that the OCZ v1.13 firmware update slowed things down in our synthetic benchmarks, it wasn’t a huge surprise to see performance drop in this area. The 512GB Octane dropped 21.5% in gaming performance while the 128GB model dipped by only 4.2%.

OCZ leveraged the benefit of owning their own controller to quickly roll out an update to their Octane line of SSDs that optimized their performance for 4K writes. OCZ easily accomplished that goal, driving an increase of 138% in the 128GB model and a gain of 52% in the 512GB. The drive toward better write IOPS though comes at some cost, with the larger capacity drive most affected. The 512GB saw hits across the board, highlighted by dips of 4.3% in our HTPC trace, 14.2% in the productivity and a 21.5% in our gaming trace. The 128GB Octane though, largely went up across the board, topped off by a 31% gain in the productivity trace.

While not explicitly saying so, it seems clear that OCZ sees the lower capacity drives as the sweet spot for the Octane audience, something that makes sense as they’re able to drive costs down over time, making the Octane an ideal buy for the mainstream or even entry-level SSD buyer. With robust performance in the 128GB capacity, OCZ puts their aim at the meat of the market. For the 512GB capacity, we might recommend users hold off on an update unless they specifically need increased random 4K write performance, since speeds drop off in other areas. For 128GB Octane owners though, it makes sense to transition to firmware v1.13 since there are huge gains in nearly every area, vastly improving overall performance.

OCZ has noted that the latest firmware build will be the base of future firmware updates, meaning that later updates on this platform will be in-place and not destructive in nature. For owners of the 512GB Octane, you could go either way on upgrading now or later, but if you want to hold off until further changes happen, you will still need to go through the data-wiping update method to move past the original firmware.