When OCZ announced the Petrol family of SSDs at the end of last year, it was clear they wanted to be able to offer an entry-level SSD to appeal to the consumer who wants many of the benefits of an SSD, but doesn’t have the budget or computing need to justify a mainstream or enthusiast class drive. The OCZ Petrol uses OCZ’s own Indilinx Everest platform just like the Octane, but with a different NAND configuration. While the Octane uses synchronous NAND, Petrol uses asynchronous, which helps keep the build cost and price lower.

When OCZ announced the Petrol family of SSDs at the end of last year, it was clear they wanted to be able to offer an entry-level SSD to appeal to the consumer who wants many of the benefits of an SSD, but doesn’t have the budget or computing need to justify a mainstream or enthusiast class drive. The OCZ Petrol uses OCZ’s own Indilinx Everest platform just like the Octane, but with a different NAND configuration. While the Octane uses synchronous NAND, Petrol uses asynchronous, which helps keep the build cost and price lower.

With the Petrol, Octane and now Vertex 4 all using Indilinx platforms, OCZ has a triple-threat of consumer SSD offerings that give them much more pricing and support flexibility than their Agility and Vertex branded SandForce-based compatriots. The Petrol specifically gives OCZ the ability to offer a low-cost SSD solution in the popular 64GB and 128GB capacities, where many first time buyers or those looking for a light duty SSD tend to buy. Granted, there isn’t much of a street price difference between the Petrol and Octane depending on when you look, but with more control over the total unit cost, OCZ can offer promotions to make the Petrol quite appealing from a price point of view.

While not designed to break any speed records, the Petrol still cranks out respectable 360MB/s read speeds and 180MB/s writes in the 128GB capacity. Given many Petrol buyers will be looking to replace a hard drive or early generation SSD, the quoted performance will likely get the job done with ease. The Petrol is available in 64GB, 128GB and 256GB (discontinued) capacities with street pricing of $83, $129 and $210 respectively. OCZ offers a three year warranty with the Petrol SSD family. 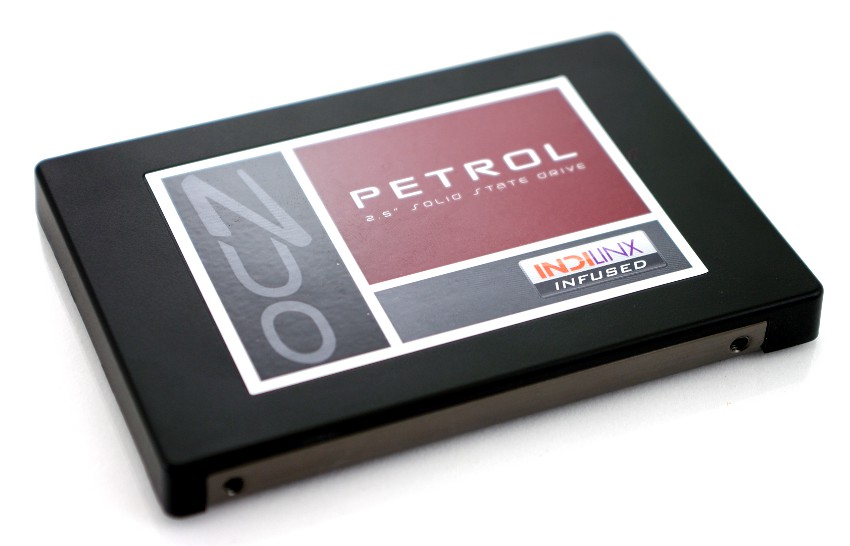 The Petrol uses the newer versatile SSD case design that OCZ adopted last year. This body makes use of a plastic cover and metal plate, where the older model had a metal body with a flat metal plate screwed into place. Besides the case itself changing, nothing else from the outside seems to indicate these drives are any different than the past models. The stickers and branding are identical as well as the information stickers on the back. 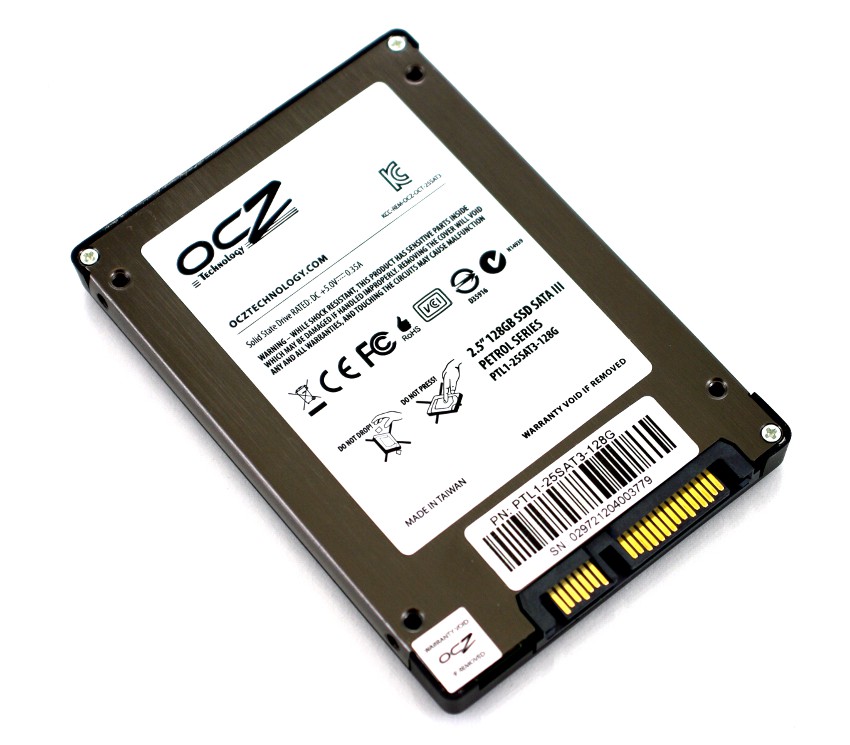 Comparing the Petrol to other OCZ SSDs, users will note the different color schemes used on each model. Whereas the Petrol makes use of brick red and black, the others go with red, silver and black, and green so signify which product family they are from. The front of the drive features a standard SATA power and data connection, with no debug pins next to the connector.

As a warning for those thinking about tearing into their new OCZ Petrol, know that you will void your warranty in the process. Besides trying to get a physical confirmation on what the internals are, there really is no reason to open one of these up, especially when we take the risk for you.

The OCZ Petrol is very easy to take apart with a Phillips-head screwdriver. After removing four screws around the perimeter and breaking through the warranty sticker, the top cover comes loose exposing the PCB inside. The circuit board is held in place with four additional screws; the primary guts including the controller are on the other side of the PCB. 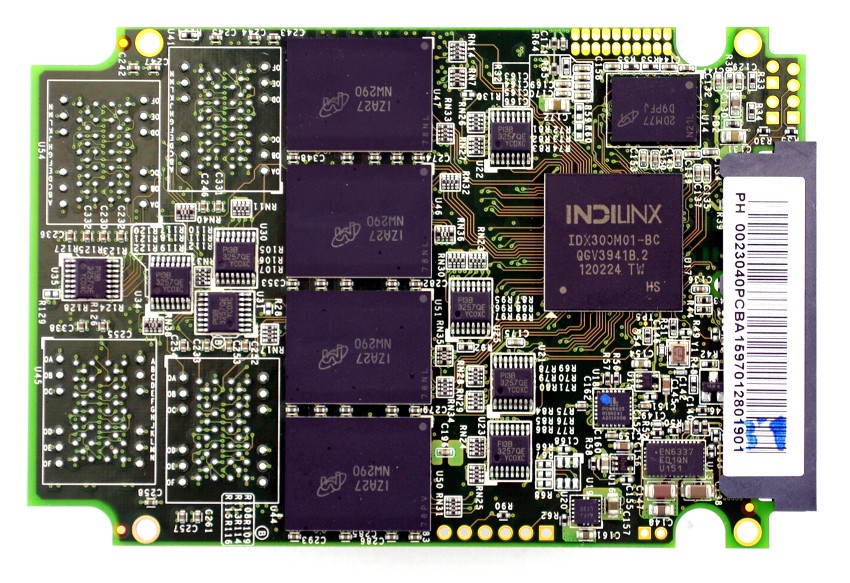 At the heart of the OCZ Petrol SSD is the Indilinx IDX300M01-BC controller. Paired with this controller is 512MB of Micron DDR3 memory split up between two 256MB pieces top and bottom. 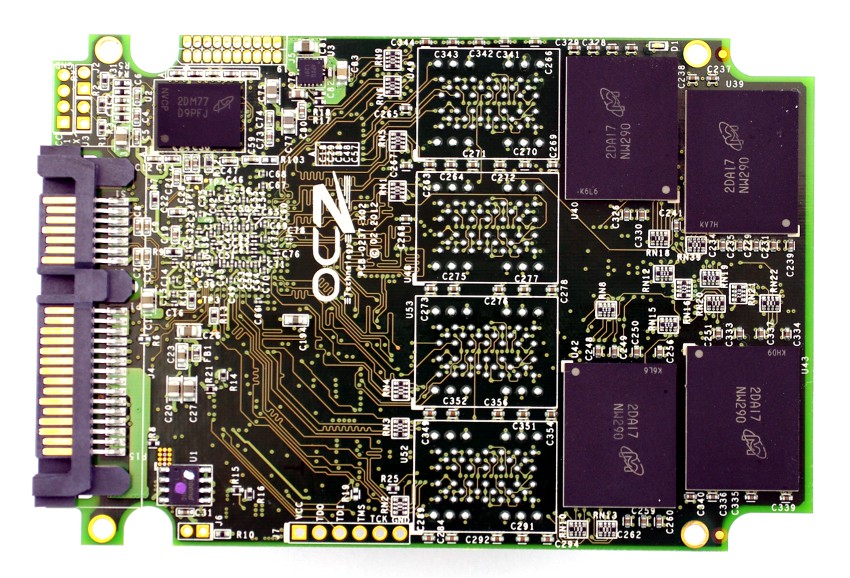 The 128GB Octane makes use of eight Micron 16GB 25nm asynchronous NAND pieces. Four are soldered onto each side with one 256MB RAM piece as well.

OCZ lists the Petrol as having a peak sequential read speed of 360MB/s and a write speed of 180MB/s. We used IOMeter with a large-block transfer to see how the drive performed in our consumer test rig.

We measured read speeds of 338MB/s and write speeds of 147MB/s in our tests, compared to 455MB/s read and 183MB/s write from the Octane of the same capacity.

Our next test sticks with the same large-block transfer but switches from sequential to random transactions.

In a large-block random workload, the OCZ Petrol came in with read speeds of 174MB/s read and 137MB/s write, compared to 312MB/s read and 174MB/s write from the Octane with synchronous NAND.

With the bread and butter of SSDs being their 4K random I/O speed, we look at low-queue depth performance, as well as expanded performance to see how well performance scales under higher queue depths. 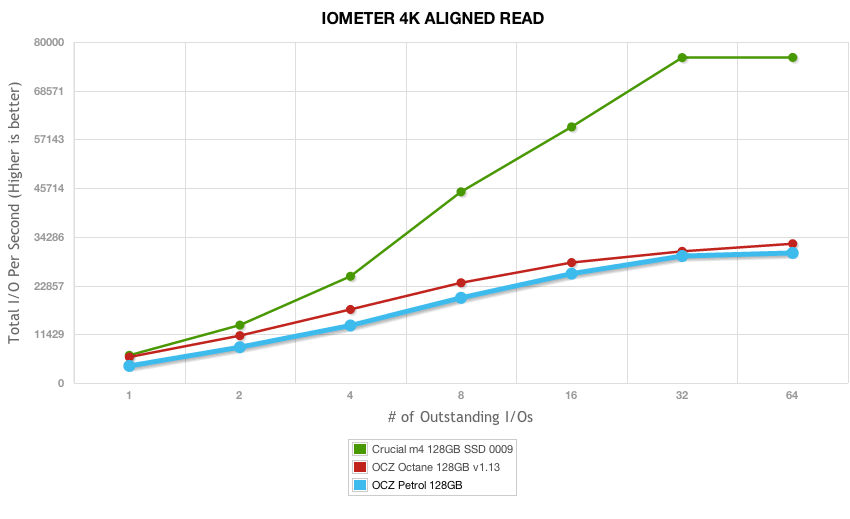 In our expanded 4K random read test, we measured a peak transfer speed of 30,511 IOPS at a queue depth of 64. 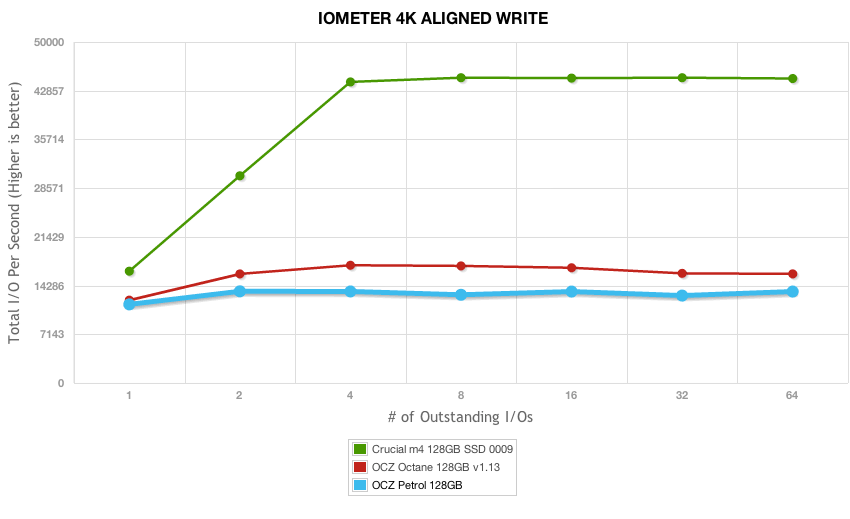 Expanding our QD1 4K test, we look at write latency of each SSD. Lower numbers are better, since it means less wait time for activity to process. Max latency is also important, although that number can change as the NAND wears over time. The OCZ Petrol SSD came in with latency almost matching the Octane. We measured an average latency of 0.0858ms from the 128GB Petrol model with a peak latency of 239ms. 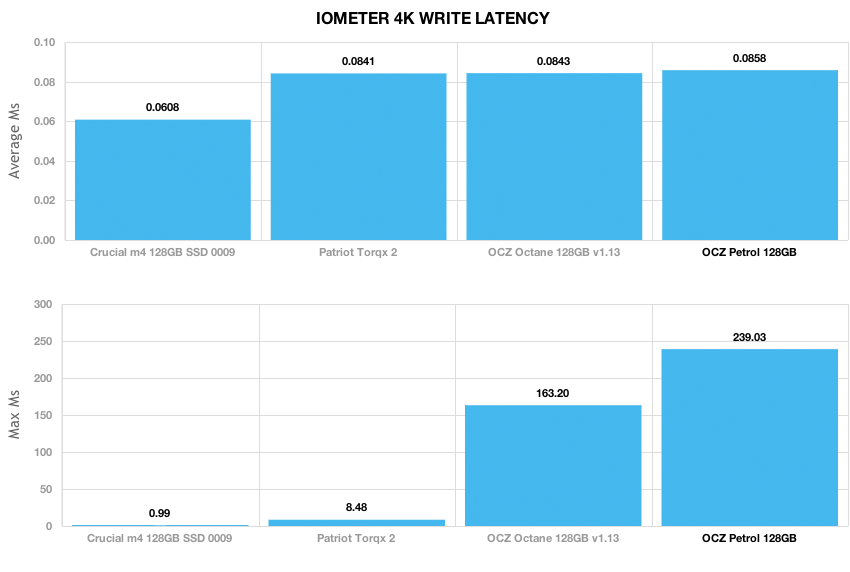 Our last group of IOMeter synthetic benchmarks looks at mixed-load server profiles including Database, Workstation, File Server, and Webserver. The OCZ Petrol in a mixed-workload setting offered good performance, measuring middle of the pack, trailing the Octane. In the workstation profile it lagged behind the group, although it was the only one equipped with asynchronous NAND. 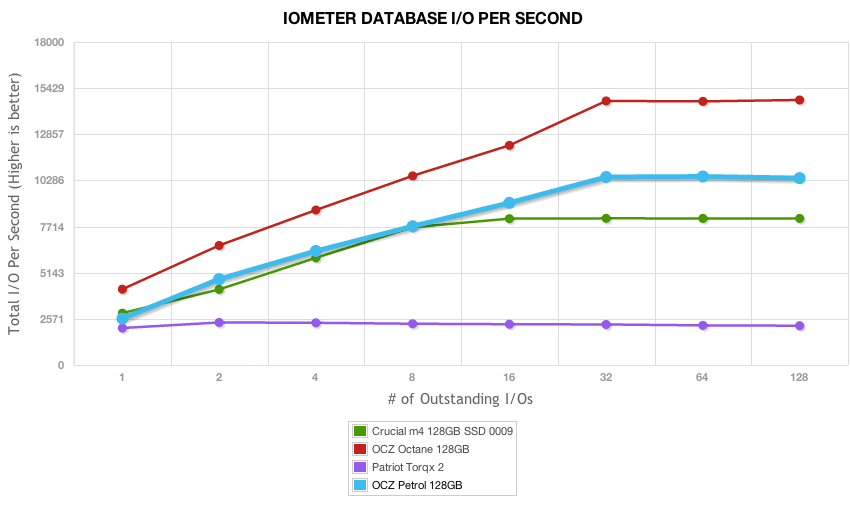 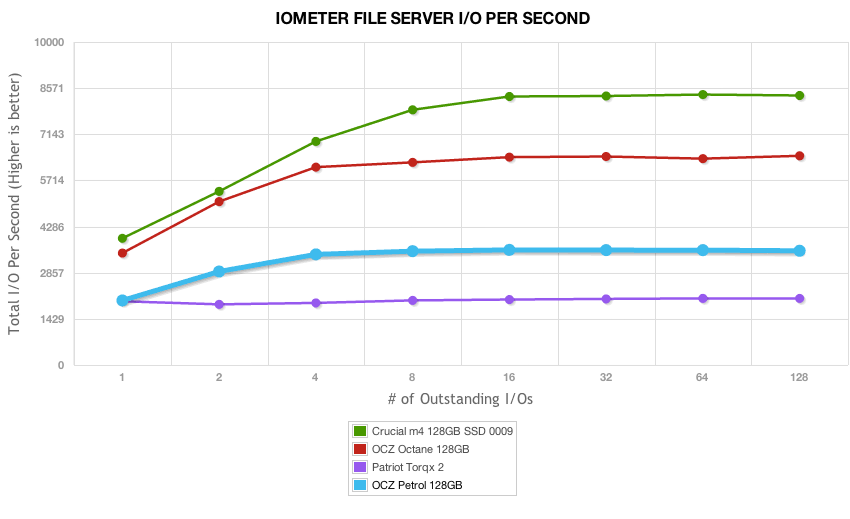 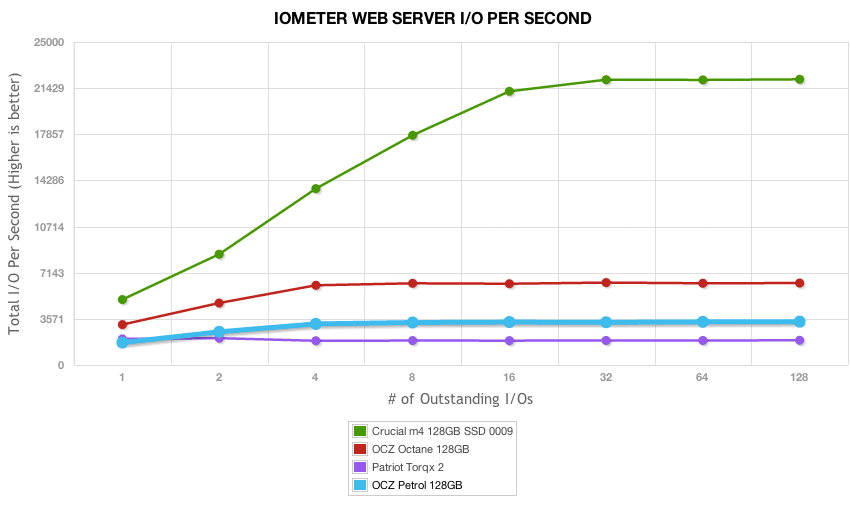 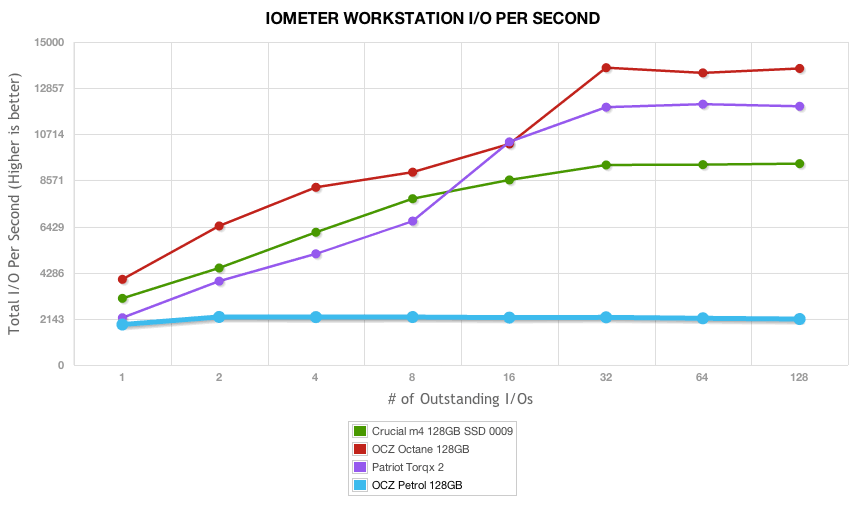 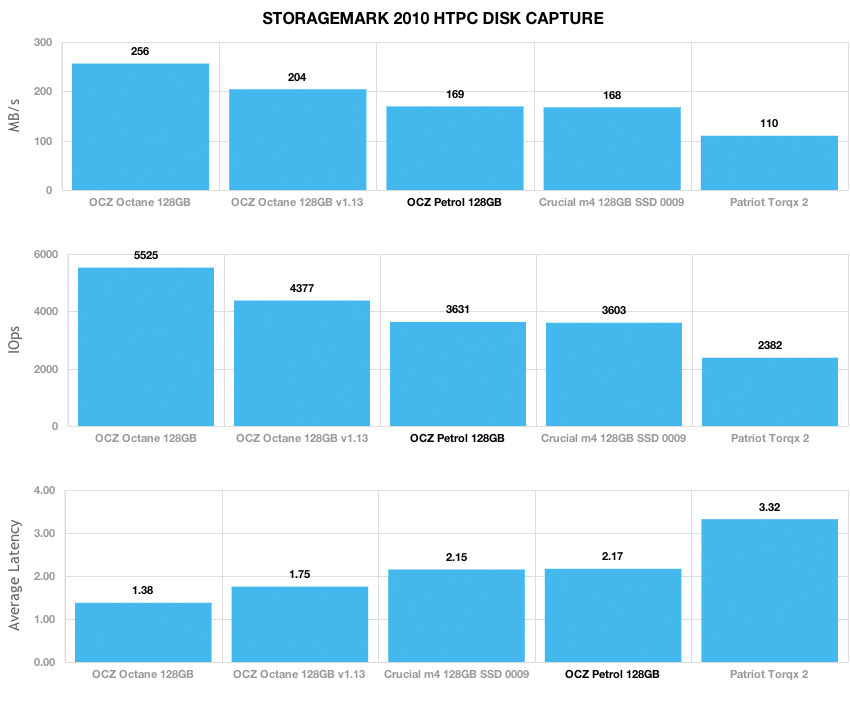 In our HTPC trace, the OCZ Petrol came in just below the OCZ Octane, with an average transfer speed of 3,631 IOPS or 169MB/s. 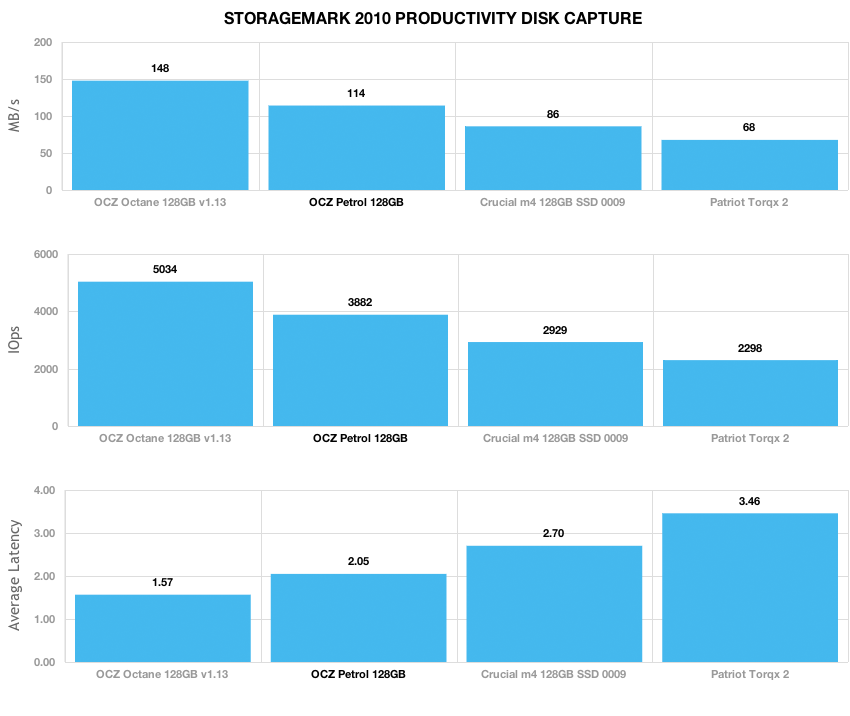 In our Productivity profile, the OCZ Petrol measured an average speed of 3,882 IOPS and 114MB/s. 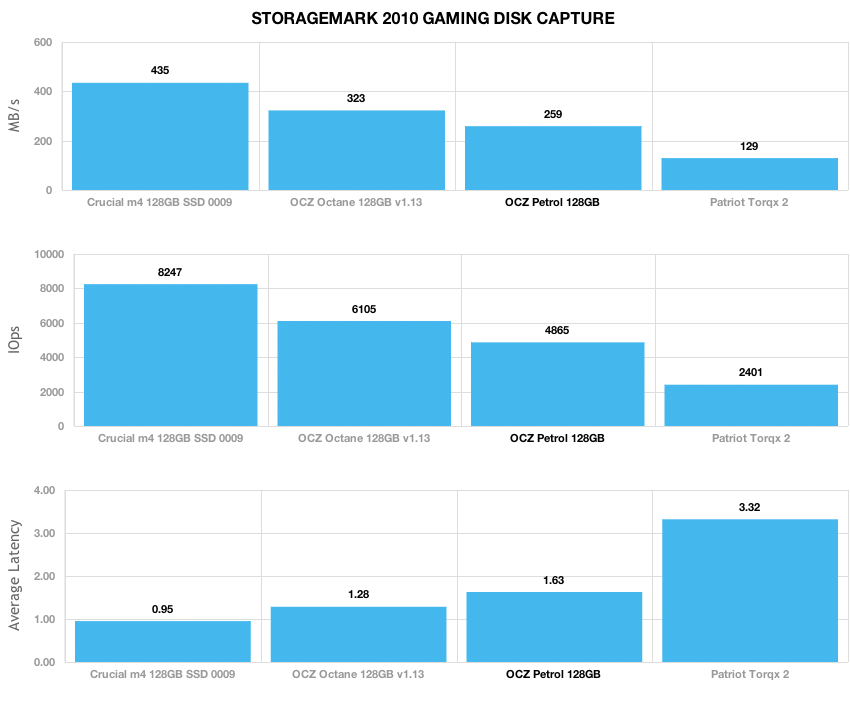 In our read-heavy Gaming profile, the OCZ Petrol measured 259MB/s average, compared to 323MB/s from the Octane.

Given the same controller as the Octane and similar NAND configuration with the difference being switched to asynchronous, the OCZ Petrol followed the power consumption levels of the Octane very closely. Under startup and write conditions, it used slightly more power than the Octane, although in read, random read, and at idle, it used slightly less.

The OCZ Petrol is a nice entry-level offering. For those looking for a first SSD or an SSD for light duty use like acting as a boot drive, the Petrol offers good performance in most areas compared to other entry-level SSDs on the market of similar capacity. While some of the synthetic benchmarks did slow wide performance gaps, in real-world performance the Petrol was able to trail the Octane pretty closely, stay above the value-oriented Patriot Torqx 2 with a Phison controller and actually beat the Crucial m4 in our productivity trace which mimics typical light computer use.

The main problem the Petrol has is around pricing when competing in the entry-SSD space. Right now for instance the 128GB Octane is cheaper than the 128GB Petrol, which limits the appeal of the Petrol in that capacity. Of course that’s not always the case and since OCZ owns more of the Petrol than their previous SandForce-based drives, they should have better margins and more opportunity to discount or otherwise promote the Petrol from time to time. Every dollar the Petrol falls under the $1/GB price point, the more appealing it gets, which happens time to time when rebates are included during promotions. Overall though, the OCZ Petrol does offer good performance for a value-centric SSD that has seen extraordinarily good discounts in the past few months.

The OCZ Petrol is designed to be a value drive for first time SSD buyers or those who have simple computing needs – good then that Petrol did quite well in our productivity trace which is the most likely usage scenario. When the pricing is right, the Petrol is a good entry-level SSD.