The OCZ RevoDrive Hybrid is new entry for OCZ in the growing caching storage segment. The main thrust of caching is to get SSD speeds over the span of a larger capacity hard drive. With the RevoDrive Hybrid, OCZ is attempting to accomplish this goal by delivering a single integrated solution of a 1TB hard drive, 100GB caching SSD and software from NVELO on a PCIe board that’s easy to install.

The OCZ RevoDrive Hybrid is new entry for OCZ in the growing caching storage segment. The main thrust of caching is to get SSD speeds over the span of a larger capacity hard drive. With the RevoDrive Hybrid, OCZ is attempting to accomplish this goal by delivering a single integrated solution of a 1TB hard drive, 100GB caching SSD and software from NVELO on a PCIe board that’s easy to install.

OCZ is the first to take this unique approach to caching, the single PCIe board solution with the SSD and hard drive embedded, truly is a novel solution. Being space constrained, OCZ opted for a 2.5" 1TB notebook hard drive, which gets piggybacked on the card. The SSD heavy lifting is handled via a pair of SandForce SF-2281 processors and 50% over provisioning for SSD longevity.

The net result is performance over the PCIe interface that is pretty astonishing, consdering the 1TB 5400 RPM drive that houses most of the data. With max read performance of 910 MB/s, writes of 810 MB/s and 120,000 IOPS, the RevoDrive Hybrid has a ton of potential for the workstation or enthusiast user. The RevoDrive Hybrid is available in a single configuration of 1TB hard drive and 100GB SSD cache (RVDHY-FH-1T) with an MSRP of $495. 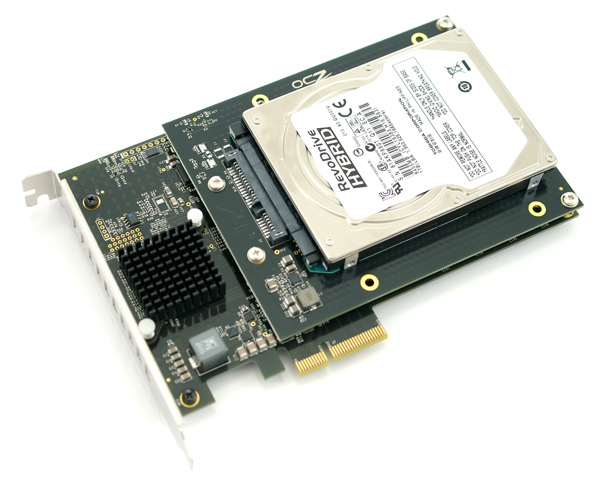 For background on this drive, see our First Thoughts Review here.

When it comes to benchmarking the OCZ RevoDrive Hybrid, it’s important to look past a lot of the initial complaints we as reviewers might have when testing a device such as this. While we might talk about it being difficult or unfeasible to use some of our testing tools with this hardware, this is only relevant to us in the context of performing the review, not the end-user experience. It is also important to realize that not all storage solutions are created equal and some of the methods used to benchmark drives or storage arrays needs to be adjusted depending on the product at hand.

The way we prefer to look at the RevoDrive Hybrid, as well as other large multi-tiered caching solutions, is how they would perform in the real world over the life of the product. This means factors like the first, second, or third load of an application is almost meaningless when you might open an application hundreds or thousands of times over the life of your computer. The Dataplex software also gives write-speeds a significant boost the first time around with write-back support, which helps reduce any pre-cached lag that might come during the first load of an application or game level. With a 100GB SSD paired to its 1TB HDD storage, almost all "hot" data would stay in the flash-storage without worrying about being bumped out like it might be in a drive like the Seagate Momentus XT with only 4GB of flash. For this reason we show how well the OCZ RevoDrive Hybrid performs when its performance levels off in each benchmark, since that is what the buyer would see in their computer from essentially the second day and beyond.

Synthetic Benchmarks
Our synthetic benchmark runs show what the OCZ RevoDrive Hybrid is capable of when hot files are cached to the drive, how fast the flash is by itself, and how slow files are accessed if they are considered "cold" and left on the hard drive. For all of our benchmarks, we’ve separated out the various scenarios possible with the RevoDrive Hybrid:
The HDD Only scenario will be the slowest while the SSD Only will of course be the fastest. We pit the RevoDrive Hybrid against the Seagate Momentus XT 500GB (2.5-inch) notebook hard drive with OCZ’s own Vertex 3 MAX IOPS 240GB SSD, one of the fastest SATA 6.0Gb/s SSDs on the market. 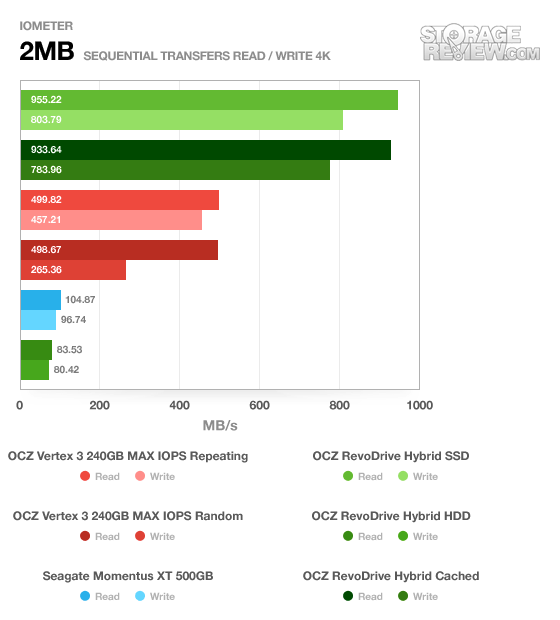 The 2MB sequential transfer benchmark generally shows the highest possible data transfer rate. The RevoDrive Hybrid simply destroys the OCZ Vertex 3 SSD with sheer numbers; note how slow the HDD component is, however. The RevoDrive Hybrid is faster because it’s using a PCI-e x4 interface and has dual SandForce processors; the Vertex 3 has one. 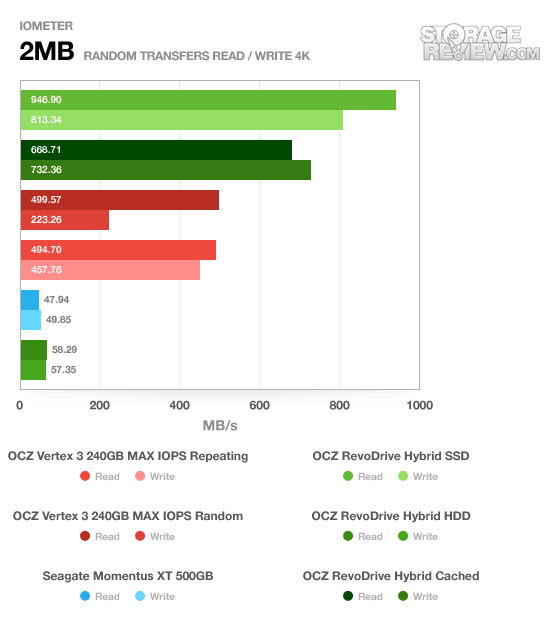 This looks similar to the sequential transfer benchmark, right? WRONG! While the RevoDrive Hybrid continues to surpass the OCZ Vertex 3 SSD in performance, notice the marked difference between the Hybrid SSD only and Hybrid SSD/HDD scenarios; it’s about 30% slower. This makes sense; the data for the "random" benchmark could be anywhere on the drive. In the case of the RevoDrive Hybrid, this means some of the data could be on the HDD and not cached on the SSD. 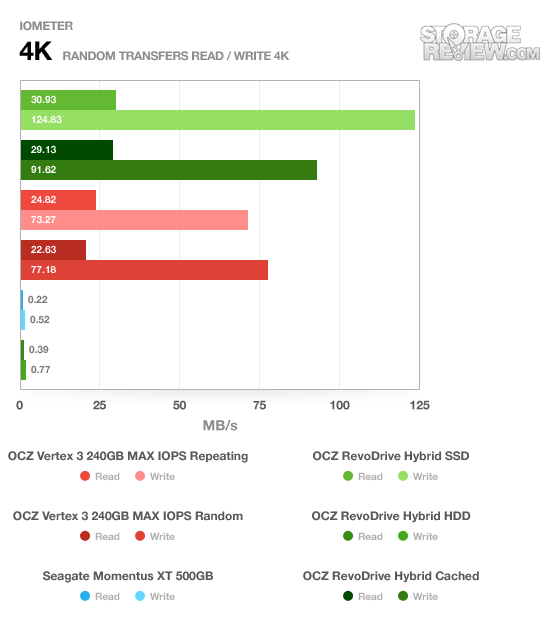 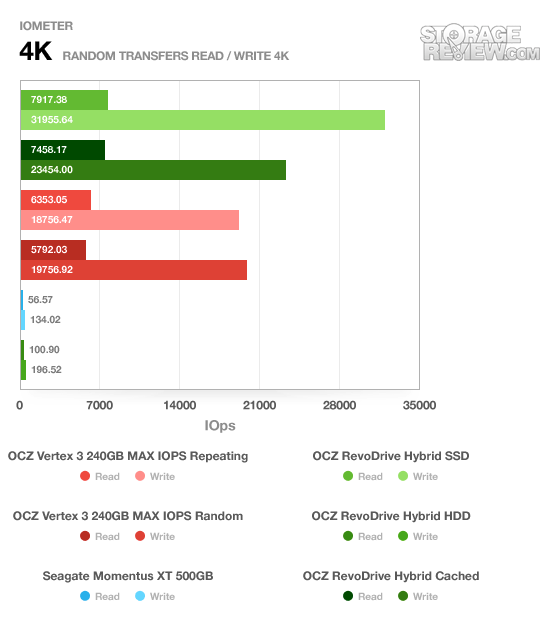 The 4K random transfer benchmark tells a similar story as the 2MB random, only here we’re dealing with a smaller file size. The MB/s numbers are much smaller as it takes more processing power to handle small files. The RevoDrive Hybrid still beats the OCZ Vertex 3 overall but the gap is far smaller (no longer 2x). 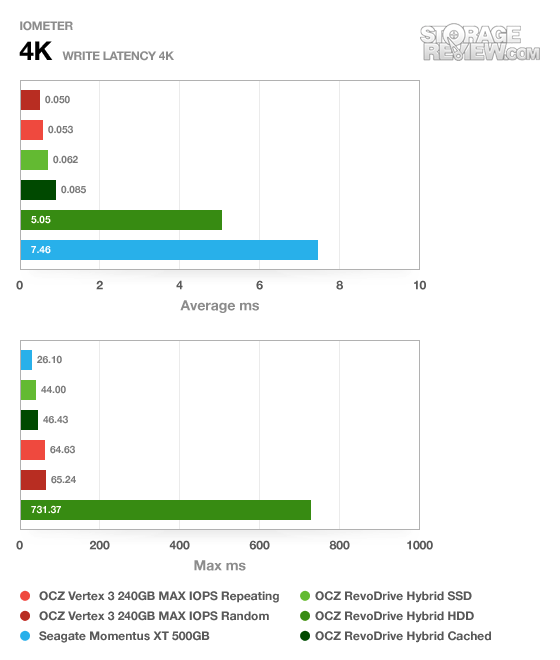 Write latency tells a different story altogether; it’s close between the RevoDrive Hybrid and the OCZ Vertex 3 but the latter wins out; this may be due to some lag associated with the use of the Dataplex caching software. Notice how long the write latency is for just the hard drive – for general use, the RevoDrive Hybrid will eliminate this lag since the SSD is used as a cache.
FutureMark PCMark 7
PCMark 7 is more of a real-world test than the synthetic benchmarks we’ve run thus far, at least in a sense that it is trying to emulate real-world scenarios. Normally we don’t turn to this application for our benchmarks, but in the case of the OCZ RevoDrive Hybrid, or more specifically the Dataplex software it uses for caching, we can’t work with the drive in a raw state. For this reason we turned to PCMark 7, which interacts with storage devices at the file-system level. We kept the comparables the same, this time using the fastest speeds for each. The jump between the first run and second run was minimal on the Hybrid, not to mention in the real-world, users will open applications hundreds of times, so the first or second boost in speed shouldn’t be a deciding factor. 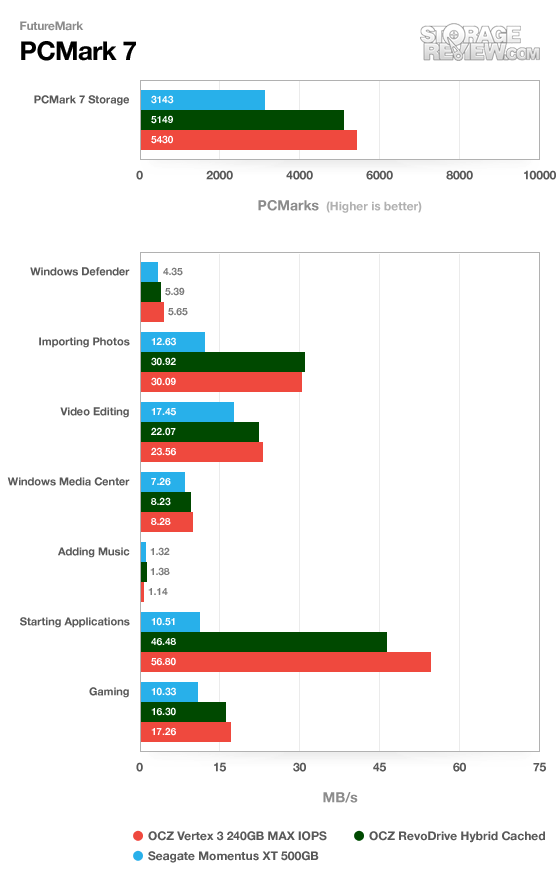 The numbers are extraordinarily close between the RevoDrive Hybrid and the OCZ Vertex 3, though the edge goes to the latter; it’s noticeably faster starting applications (56.80MB/s vs. 46.48MB/s). The real-world difference between the two drives though is minimal in most areas, with the Hybrid being able to bring "hot data" incredibly close to full SSD speeds. If a buyer is looking for a high capacity drive with speeds in close parity to flash storage, the Hybrid doesn’t let us down.
Warranty
The RevoDrive Hybrid comes with a three-year warranty, which is the same length as the company currently offers on its other SSD-based storage products including the Vertex SSD line. This is the same as what buyers might find in the SSD market, although less than the 5-year warranty most hard drive manufacturers offer, including Seagate with their 500GB Momentus XT. Another issue some enthusiasts might run into is the 1TB Toshiba hard drive included with the Hybrid is not upgradable at this time, as the RevoHybrid BIOS supports specific hard drive pairings.
Conclusion
The OCZ RevoDrive Hybrid is an impressive and very unique storage solution. It offers 1TB of capacity and for most everyday usage provides nearly the same level of performance as with a stand alone SSD. Therefore it does exactly what it set out to do: strike a balance between the raw performance of an SSD yet provide the capacity of a hard drive. It does both at a price point somewhere in between, but at a much, much better price per GB ratio. Priced similarly to the 240GB OCZ Vertex 3 MAX IOPS that we compared it to, it offered four times the capacity.
The included Dataplex caching software responsible for the data distribution between the SSD and HDD portions of the RevoDrive Hybrid works well but getting started can be frustrating. The first Windows install to the 5400 RPM hard drive is a slow one, versus the rather quick install to a straight SSD. For what might amount to very minor annoyances gets you 1TB of fast storage for under $500 though once you’re at full speed and back in business.
It makes sense to recommend the RevoDrive Hybrid in scenarios where it will see use as a primary drive. What this translates to is this product is geared towards prosumer and workstation environments, where a full-size PCI-Express slot is available. Overall the RevoDrive Hybrid has a lot to offer in a rather unique segment of the storage market, offering SSD speeds with the capacity of a hard drive, but at a much lower price than that same capacity in all flash.
Pros
Cons
Bottom Line

In the emerging world of hybrid storage solutions, the OCZ RevoDrive Hybrid is truly unique – there’s nothing on the market quite like this offering. The Hybrid delivers near industry-leading SSD speeds across a 1TB 2.5" hard drive – consider the main objective of an SSD cache not only accomplished, but completed with style and panache thanks to innovative product design from OCZ and the creative Dataplex software.