The Synapse Cache SSD is OCZ’s attempt at a DIY consumer software-based storage caching setup. Essentially it lets you stick a SATA 6.0Gb/s over-provisioned SSD in front of almost any hard drive to act as a large file cache, theoretically giving you the speed of a SSD over the capacity of a HDD or disk array. This is very similar, in fact it uses the same software, as the PCIe OCZ RevoDrive Hybrid we just reviewed. While the RevoDrive Hybrid includes a 1TB hard drive, dual-processor SSD and caching software, the Synapse is simply a caching SSD and Dataplex software, offering users tremendous flexibility and a lower price point.

The Synapse Cache SSD is OCZ’s attempt at a DIY consumer software-based storage caching setup. Essentially it lets you stick a SATA 6.0Gb/s over-provisioned SSD in front of almost any hard drive to act as a large file cache, theoretically giving you the speed of a SSD over the capacity of a HDD or disk array. This is very similar, in fact it uses the same software, as the PCIe OCZ RevoDrive Hybrid we just reviewed. While the RevoDrive Hybrid includes a 1TB hard drive, dual-processor SSD and caching software, the Synapse is simply a caching SSD and Dataplex software, offering users tremendous flexibility and a lower price point.

OCZ’s implementation of this approach uses Dataplex software from NVELO to perform the actual caching of the files. This has the benefit of not requiring any special or expensive hardware, but also means that the OS choice is limited to Windows 7. Dataplex works by taking what’s called “hot data” that is used frequently and placing it on the SSD for rapid response time. “Cold data” that is used less frequently remains on the hard drive or drive array. That’s the general nature of caching, though such a simple discussion underplays the brilliance behind the caching algorithms  that adapt to the user’s usage patterns to intelligently cache the most accessed files.

Setup is a breeze, the user simply needs to install the SSD and Dataplex software that pairs the drives together to start seeing the benefit of caching. This is perhaps the fastest way to start using a cache drive, as the operating system, programs and files do not need to be reinstalled by the user. The only current limitation is the Dataplex software has a HDD size limitation of 2TB. NVELO says that will be patched to allow for any capacity hard drive before the year is out however.

Unlike the RevoDrive Hybrid that comes in a single capacity point, OCZ offers the Synapse Cache SSD in 64GB and 128GB capacities, with the larger SSD obviously offering twice the cache space. Both drives are 50% over provisioned for drive longevity, meaning the cache space available will be 30GB and 60GB respectively. The 64GB Synapse carries an MSRP of $149, the 128GB capacity is $249. Our review unit is the 64GB version. 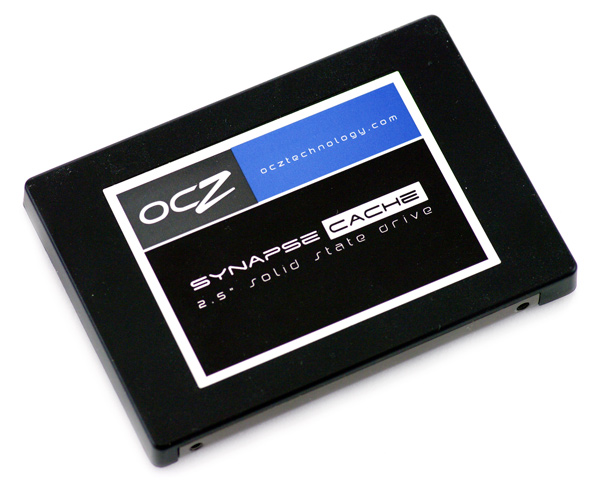 The Synapse Cache uses the newer SSD design that OCZ adopted earlier this year. This design makes use of a plastic cover and metal plate, where the older model had a metal body with a flat metal plate screwed into place. Both designs look very attractive. 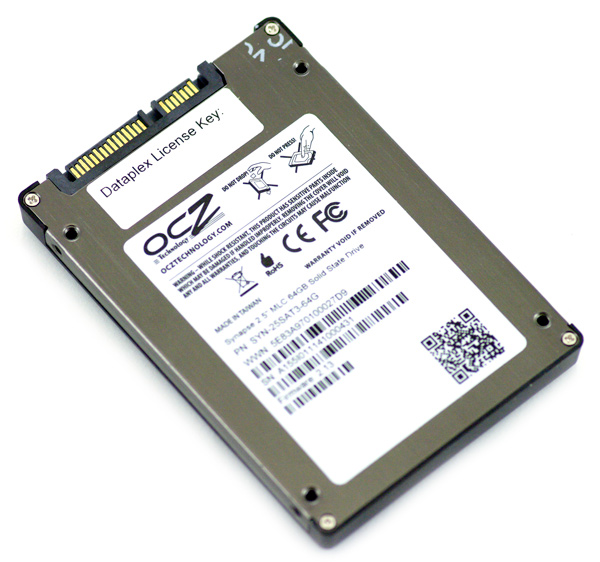 Besides the case itself changing, nothing else from the outside seems to indicate these drives are any different than the past models. The stickers and branding are identical, as well as the information stickers on the back (albeit heavy one Dataplex License Key). Comparing the Synapse Cache to other OCZ SSDs, users will note the different color schemes used on each model. Whereas the Synapse makes use of silver and blue, the others go with red, silver and black, and green so signify which product line they are from.

The front of the drive features a standard SATA power and data connection, with no debug pins next to the connector.

As a warning for those thinking about tearing into their new OCZ Synapse Cache, know that you void your warranty in the process. Besides trying to get a physical confirmation on what the internals are, there really is no reason to open one of these up.

The OCZ Synapse Cache is very easy to take apart with a Phillips-head screwdriver. After removing four screws around the perimeter and breaking through the warranty sticker, the top cover comes loose exposing the PCB inside. The circuit board is held in place with four additional screws, although the only guts of the drive are on top. 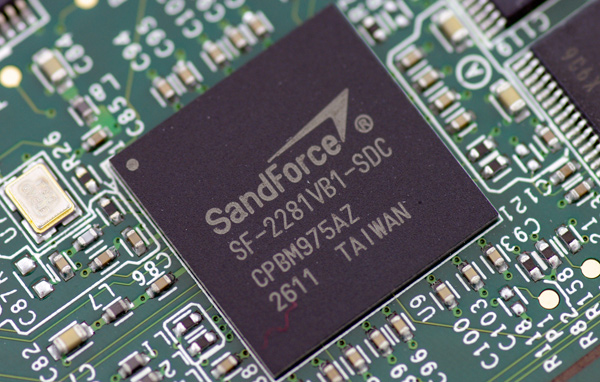 At the heart of the OCZ Synapse Cache SSD is the same SandForce SF-2281VB1-SDC controller also found inside Vertex 3, Agility 3 and Solid 3 SATA 6.0Gb/s SSDs. SandForce processors interact directly with the flash modules, without a buffer, meaning no board space is taken up by RAM. This also helps save on power and also helps reduce overall size when you shrink the entire layout down to micro-levels. 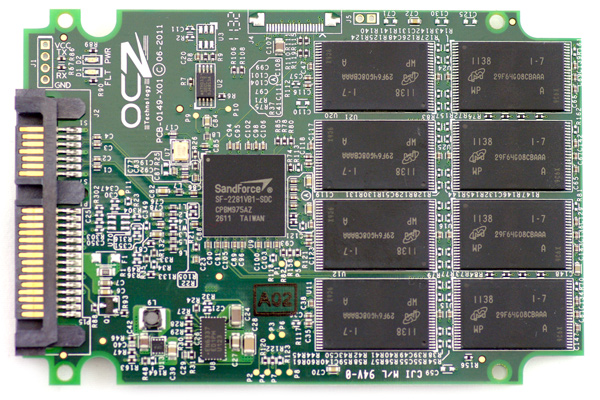 When it comes to benchmarking the OCZ Synapse Cache, it’s important to look past a lot of the initial complaints we as reviewers might have when testing a device such as this. While we might talk about it being difficult or unfeasible to use some of our testing tools with this hardware, this is only relevant to us in the context of performing the review, not the end-user experience. It is also important to realize that not all storage solutions are created equal and some of the methods used to benchmark drives or storage arrays needs to be adjusted depending on the product at hand.

The way we prefer to look at the Synapse Cache, as well as other large multi-tiered caching solutions, is how they would perform in the real world over the life of the product. This means factors like the first, second, or third load of an application is almost meaningless when you might open an application hundreds or thousands of times over the life of your computer.

The Dataplex software also gives write-speeds a significant boost the first time around with write-back support, which helps reduce any pre-cached lag that might come during the first load of an application or game level. With a 30GB SSD paired to its HDD storage, almost all “hot” data would stay in the flash-storage without worrying about being bumped out like it might be in a drive like the Seagate Momentus XT with only 4GB of flash. For this reason we show how well the OCZ Synapse Cache performs when its performance levels off in each benchmark, since that is what the buyer would see in their computer from essentially the second day and beyond.

Our synthetic benchmark runs show what the OCZ Synapse Cache is capable of when hot files are cached to the SSD and how fast the flash is by itself. We didn’t include the 2TB Western Digital RE4 used for the boot drive in these results since the hard drive is not sold as part of this package. Another reason is that it is the slowest aspect of this analysis, and once items are cached, the speeds will be similar regardless of the hard drive use. For all of our benchmarks, we’ve separated out the various scenarios with the Synapse Cache: 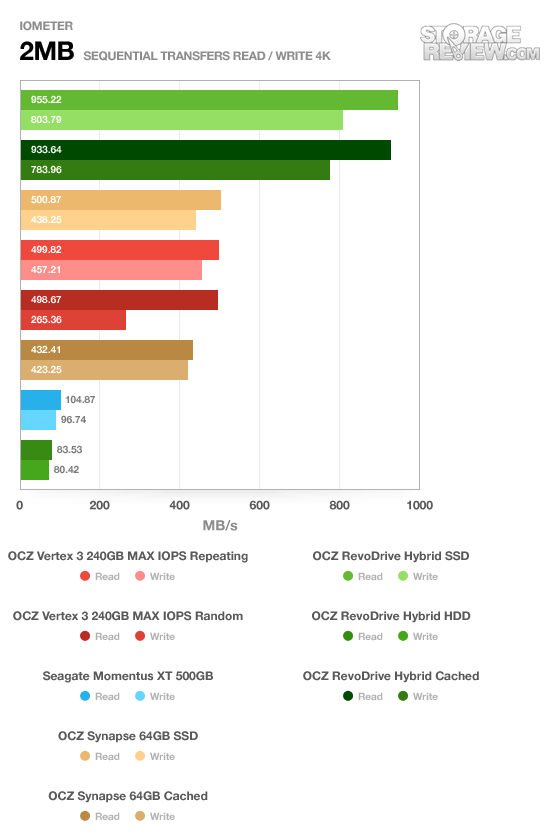 In terms of straight-line performance the OCZ Synapse Cache performed right up there with the Vertex 3 MAX IOPS, with an average read speed of 501MB/s and a write speed of 438MB/s. When operating in a cached mode with the RE4 thrown in the mix, the speed dropped to 432MB/s read and 423MB/s write with overhead from the Dataplex software working in the background. 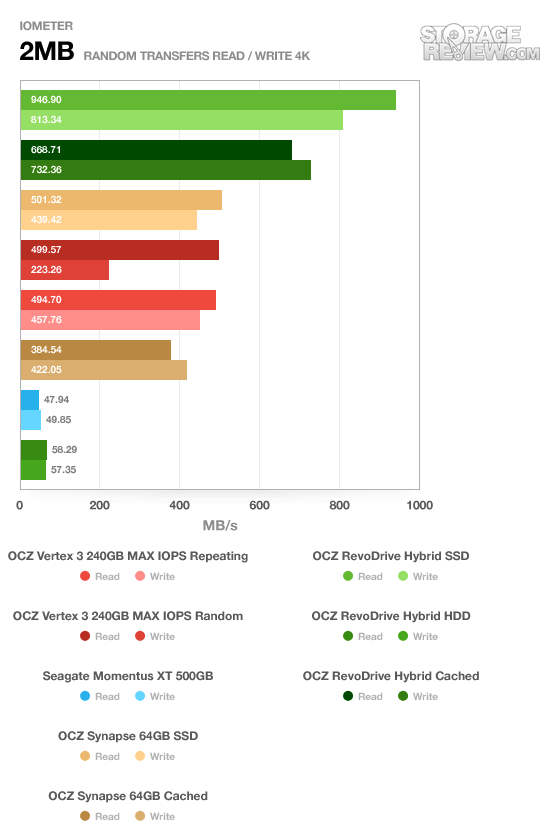 When we changed to a random access test with the same 2MB transfer size, speeds still stayed very high at 501MB/s read and 439MB/s write. With the Dataplex software caching added in, those speeds dropped to 384MB/s read and 422MB/s write. 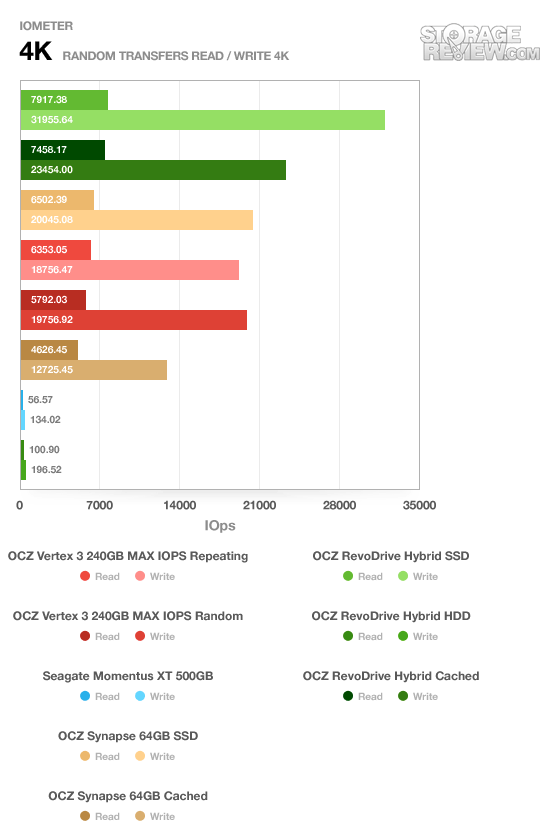 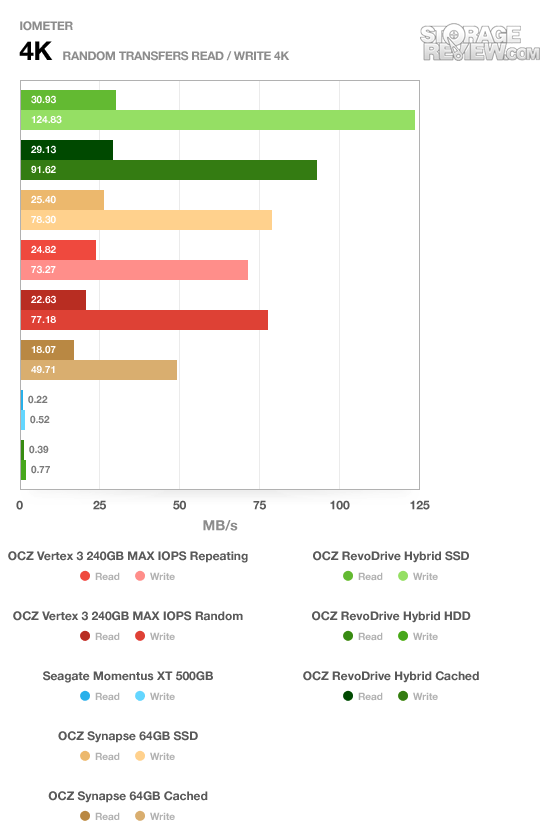 It was surprising to see such a similar performance scaling of the Synapse Cache to the RevoDrive Hybrid. Both drives saw a similar percentage drop in speed between their raw SSD-only speeds to Dataplex cached. One of the surprising factors in all of this is even interfacing at a hardware level the Dataplex software barely caused a blip in our CPU usage. Behind the scenes in most of our benchmarks the CPU usage jumped 2-3% between SSD-only tests and SSD/HDD-cached tests. 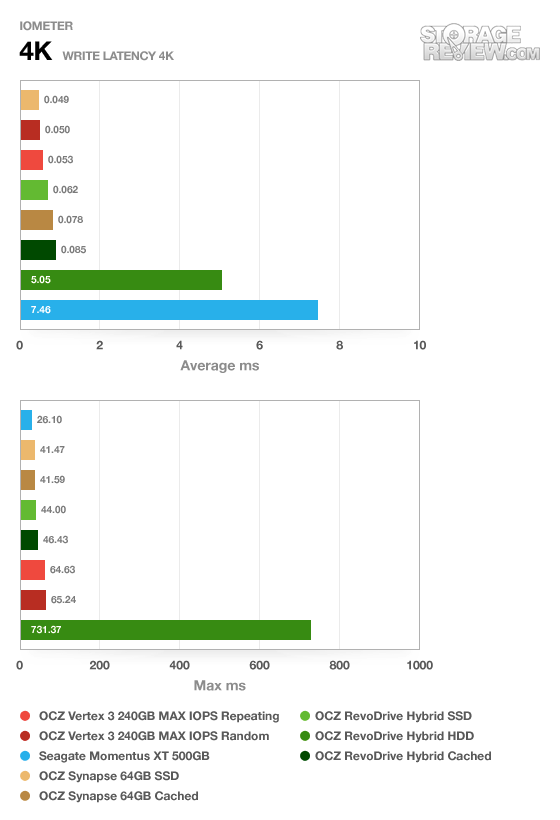 PCMark 7 is more of a real-world test than the synthetic benchmarks we’ve run thus far, at least in a sense that it is trying to emulate real-world scenarios. Normally we don’t turn to this application for our benchmarks, but in the case of the OCZ Synapse Cache, or more specifically the Dataplex software it uses for caching, we can’t work with the drive in a raw state. For this reason we turned to PCMark 7, which interacts with storage devices at the file-system level. We kept the comparables the same, this time using the fastest speeds for each. The jump between the first run and second run was minimal on the Cache, not to mention in the real-world, users will open applications hundreds of times, so the first or second boost in speed shouldn’t be a deciding factor. 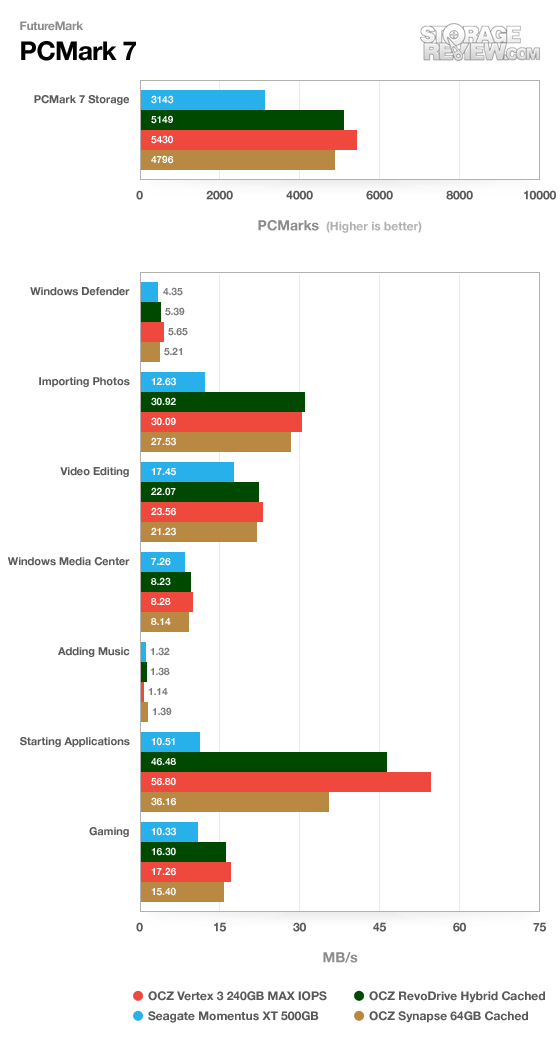 In overall system performance, the OCZ Synapse Cache gave us most of the performance that you would find from a mid-range SSD. While  performing under the Vertex 3 MAX IOPS and RevoDrive Hybrid solutions (which cost more than three times the Synapse Cache), it still offered speeds far surpassing the 500GB Seagate Momentus XT. In almost every test segment except starting applications, it scored very close to the Vertex 3 and Hybrid.

OCZ set out to broaden their SSD caching options with the Synapse SSD and boy did they deliver. Paired up with the included Dataplex software and a user’s own high capacity hard drive, the end results are just plain sick, fly, da bomb, pimp, baller – use whatever slang you like, the result is the same, the Synapse absolutely delivers on all fronts. When paired with a 7200 RPM 2TB hard drive in our tests, the benchmarks show the proof; the Synapse Cache SSD hangs at near parity with the highest performing single SSD we’ve seen, the Vertex 3 Max IOPS, over the span of a 2TB hard drive.

In fact, the Synapse was really only shown up by its cousin, the RevoDrive Hybrid. The Hybrid has the benefit of the PCIe interface though and dual SandForce controllers, so being beaten by such a device isn’t exactly a knock. Considering that the Synapse is essentially an over-provisioned Agility 3 with intelligent adaptive caching software the results are nothing short of amazing. And perhaps the best part is, the hard drive behind the Synapse doesn’t really matter all that much in terms of the overall performance.

If we’re going to get nitpicky, yes, the 2TB limitation of the Dataplex software should have probably been resolved before launch, but we’re told a fix is definitely in the works and will be delivered soon, and the software only works with Windows 7. Those issues aside though, setup takes minutes and the caching algorithms work so well, it’s going to take an overly-astute user to actually feel the difference very often between the Synapse Cache and a dedicated system SSD.

OCZ’s Synapse Cache SSD delivers on the promise of SSD speeds across a large storage volume without high cost. We’re shocked at how well the system works and considering the $150 entry-point, this is the no-brainer upgrade of the century for those wanting big speed over big storage.

NVELO Drives Storage Caching to the Masses with Dataplex