The OCZ Vector 180 is the direct successor to the Vector 150, which was a nicely designed SSD that we found very reliable while boasting great endurance. The Vertex 180 improves on these qualities by offering power failure management functionality as well as adding OCZ’s ShieldPlus plan, the latter which offers consumers a market leading customer service and replacement plan. Like all recent OCZ drives, the Vector 180 uses an in-house controller with the OCZ Barefoot 3 M00, giving OCZ much more control over their pricing, as well as improved performance, reliability, and support. This has been made obvious in OCZ’s recent release of reliability data, which demonstrates how they have become leaders in the consumer SSD market in this category.

The OCZ Vector 180 is the direct successor to the Vector 150, which was a nicely designed SSD that we found very reliable while boasting great endurance. The Vertex 180 improves on these qualities by offering power failure management functionality as well as adding OCZ’s ShieldPlus plan, the latter which offers consumers a market leading customer service and replacement plan. Like all recent OCZ drives, the Vector 180 uses an in-house controller with the OCZ Barefoot 3 M00, giving OCZ much more control over their pricing, as well as improved performance, reliability, and support. This has been made obvious in OCZ’s recent release of reliability data, which demonstrates how they have become leaders in the consumer SSD market in this category. 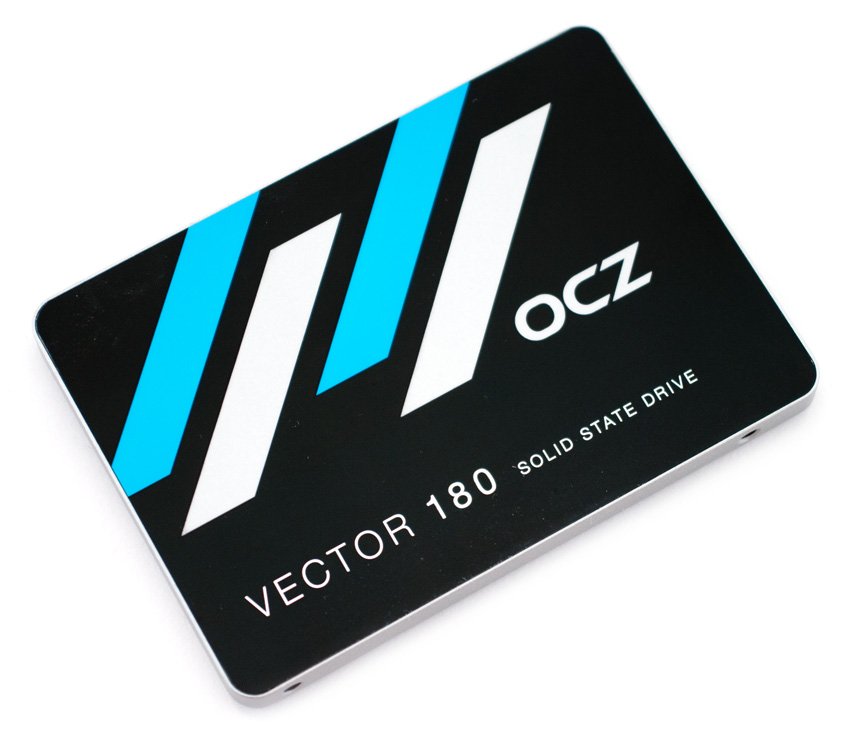 OCZ’s Vector 180 now features Power Failure Management Plus (PFM+), which protects the SSD in the event of system power loss or other instabilities related to power by detecting power anomalies before they happen. In addition, the firmware intermittently creates snapshots of the mapping table and then saves them to flash. If an issue is detected, the drive holds up the SSD circuitry long enough to safeguard the integrity of the drive, allowing it to be fully operational once power has been restored. It should be noted, however, that this functionality only protects inactive data and does not include in-flight data.

As far as performance goes, OCZ indicates that the Vector 180 is designed to have good burst speed with the ability to maintain its pace, quoting sustained writes at 23,000 IOPS. Additionally, OCZ quotes sequential reads and writes at 550MB/s and 530MB/s respectively (both values of which are the same as the Vector 150), while random read and write throughput are cited as reaching 100,000 IOPS and 95,000 IOPS respectively.

The Vector 180 is the first drive of the line to feature OCZ’s ShieldPlus Warranty plan, which is a service that the company offers to eliminate the hassle and pain that are usually inherent of support and warranty claims. This removes the often numerous returns that usually occur as well as any shipping costs. When these two issues are combined, this can curb a lot of consumers away from even bothering with the return process. The ShieldPlus works by the user simply providing their serial number (no original purchase receipt required), and if that drive is deemed to be defective, OCZ will then replace it with a brand new SSD and send it right away. Consumers then send their defective drive once their new one arrives with a paid return shipping label. This is by far one of the best warranty/support plans out there.

Though the Vector 180 uses a completely new design compared to its predecessor, it still uses the same best-in-class quality build for its enclosure. Its 7mm form factor has a high-quality metal, all-black design, with the OCZ logo and product name located on the front and is designed to dissipate head .The drive is very slick looking, which helps to differentiate itself from the saturated market, though it really doesn’t matter since it will be spending the vast majority of its lifespan inside a desktop.

Its 7mm 2.5-inch form-factor (which is becoming more and more of the norm for SSDs) allows the Vector 180 to be used in a wide range of use cases–from an ultrabook to a gaming desktop. As such, the front of the drive has the standard SATA power and data interface. Service and firmware upgrade functions are done via the OCZ Toolbox. 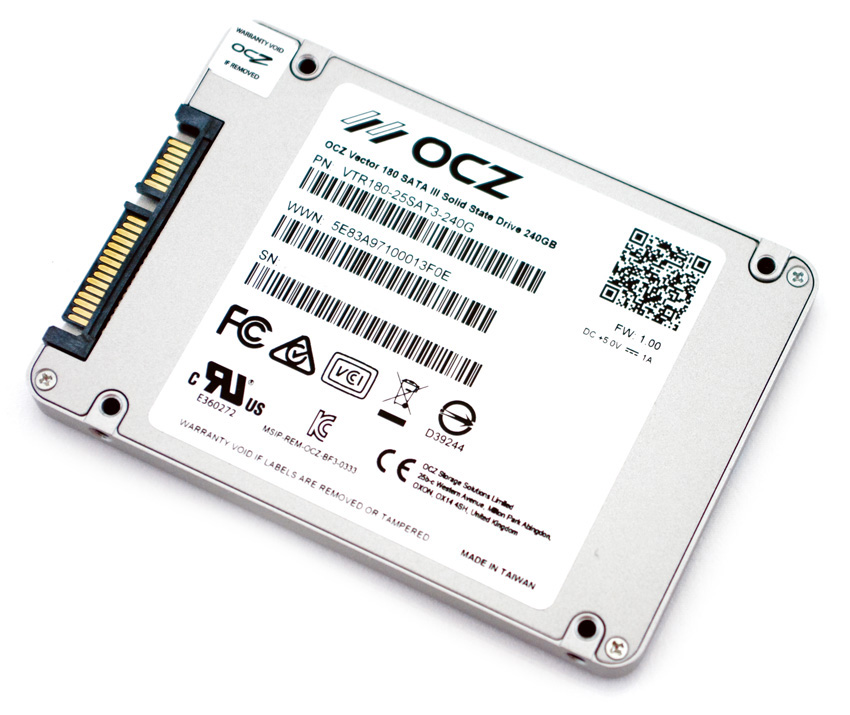 To open the Vector 180, simply remove the four screws located at the four corners of the drive. Once that is done, pry up the cover open. The cover itself is in part held by a thermal pad, which is used by OCZ to help remove heat from the Barefoot controller and into the body of the case instead. 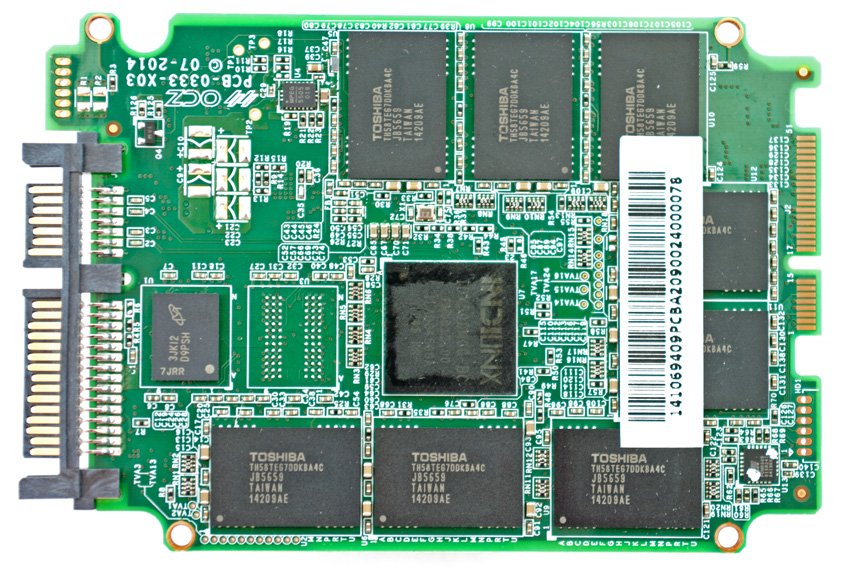 The Vector 180 uses the OCZ Barefoot 3 M00 controller as well as sixteen pieces of Toshiba A19 MLC NAND, which is placed on both the top and bottom of the circuit board. 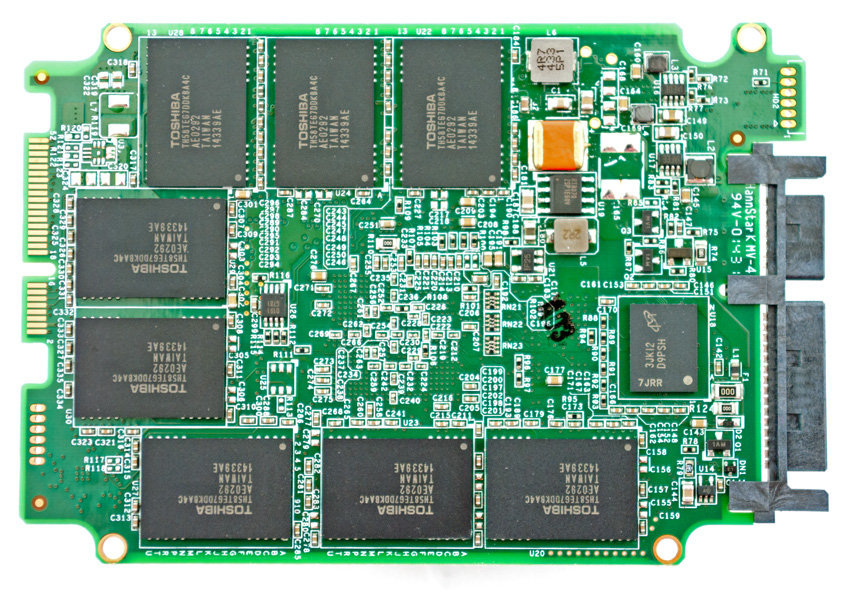 All consumer SSD benchmarks are conducted with the StorageReview HP Z620 Workstation. We compared the OCZ Vector 180 with the following comparables:

Our 4K write latency benchmark looks at both the average and maximum readings. Here, the Vector 180 480GB showed a leading average latency of 0.33ms though it posted a very high maximum latency at 1,528ms. The 960GB model had results that were more of the same with 0.033ms (average) and 2,716.65 (maximum). 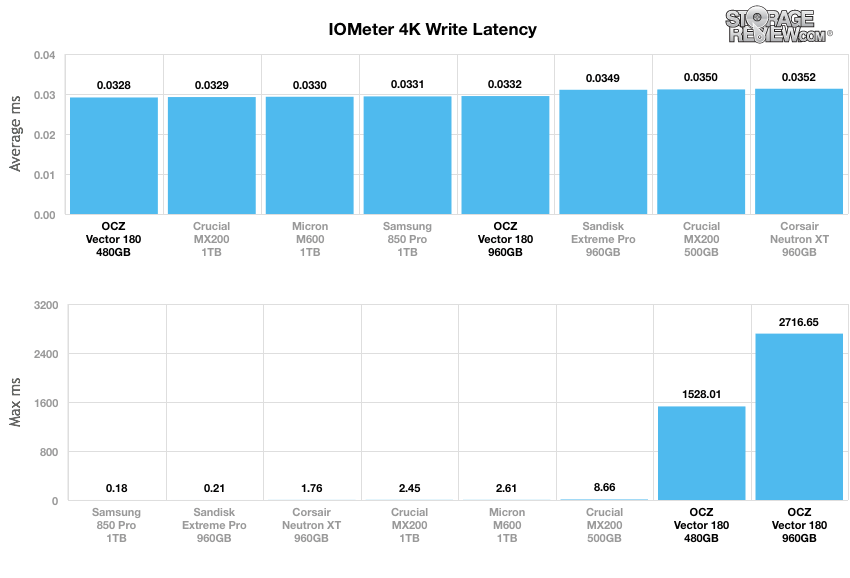 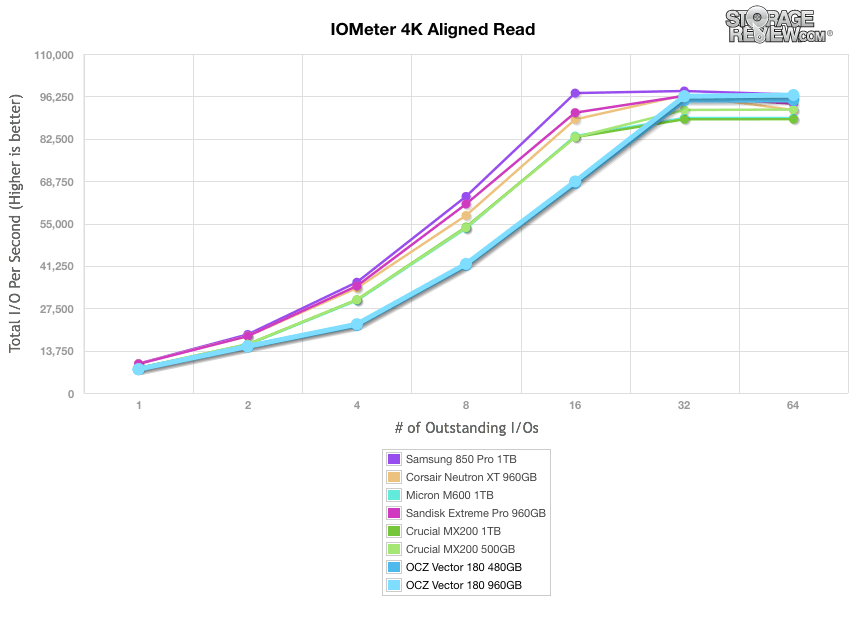 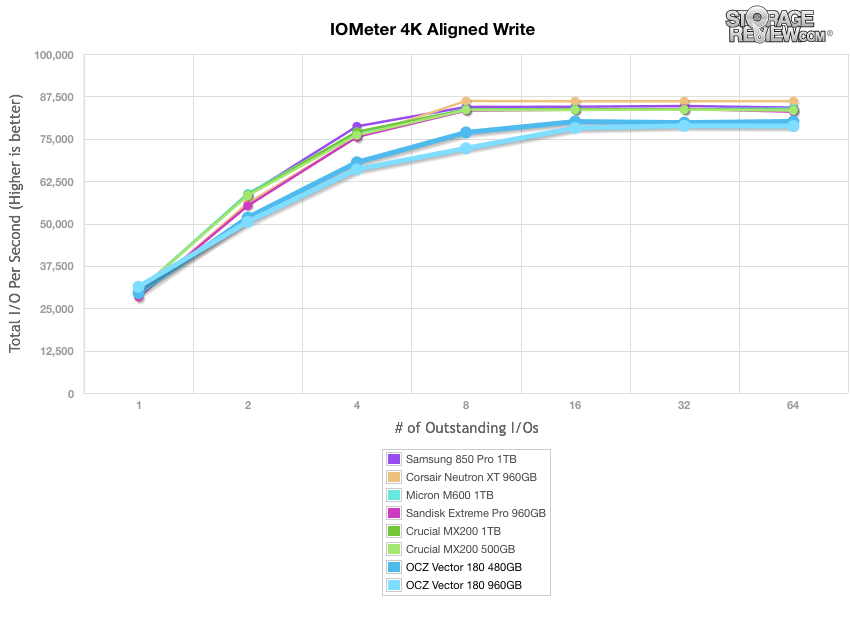 Our last series of synthetic benchmarks compare the hard drives in a series of server mixed-workloads with a queue depth of ranging from 1 to 128. Each of our server profile tests has a strong preference towards read activity, ranging from 67% read with our database profile to 100% read in our web server profile. In all of our mixed workloads, the Vector 180 drives performed very well, ranking from the mid to the top of the pack among the consumer SSDs tested. 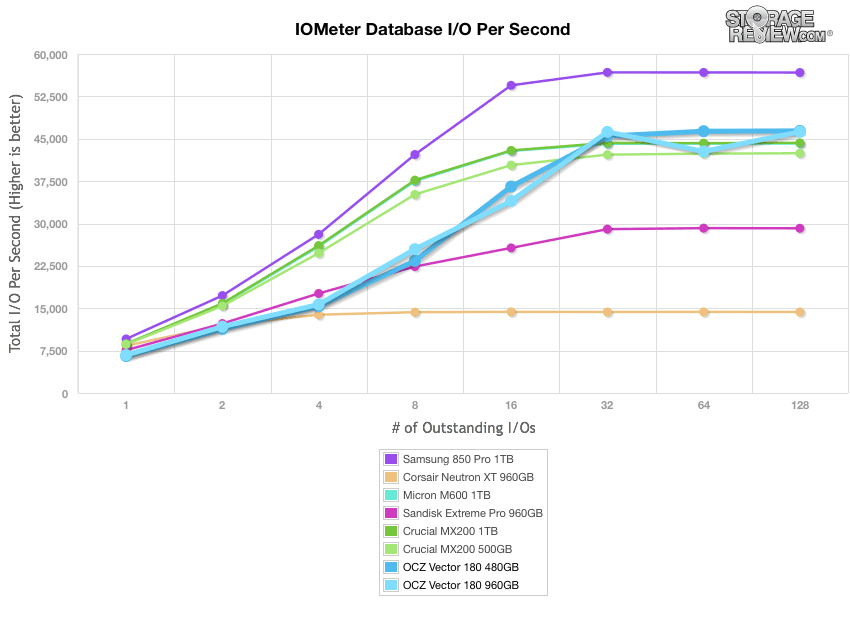 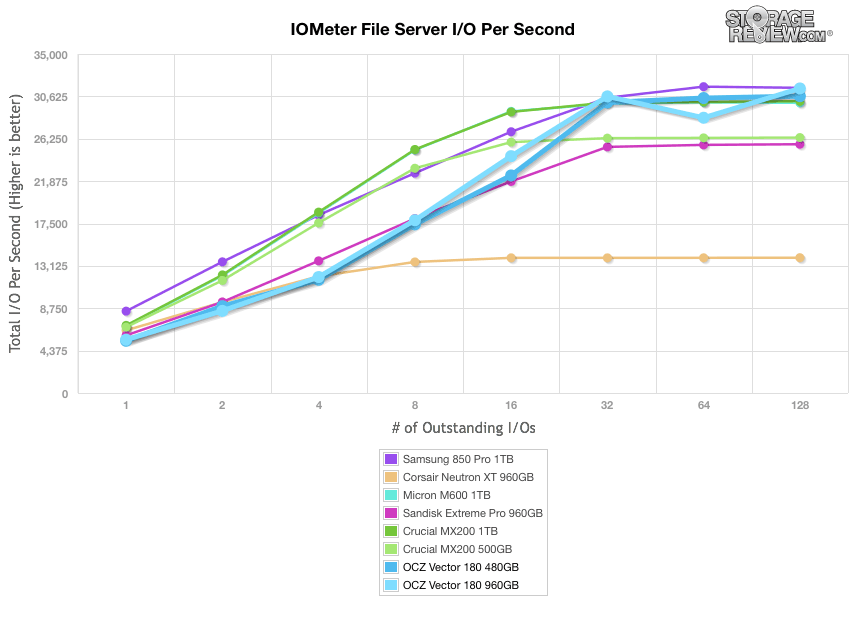 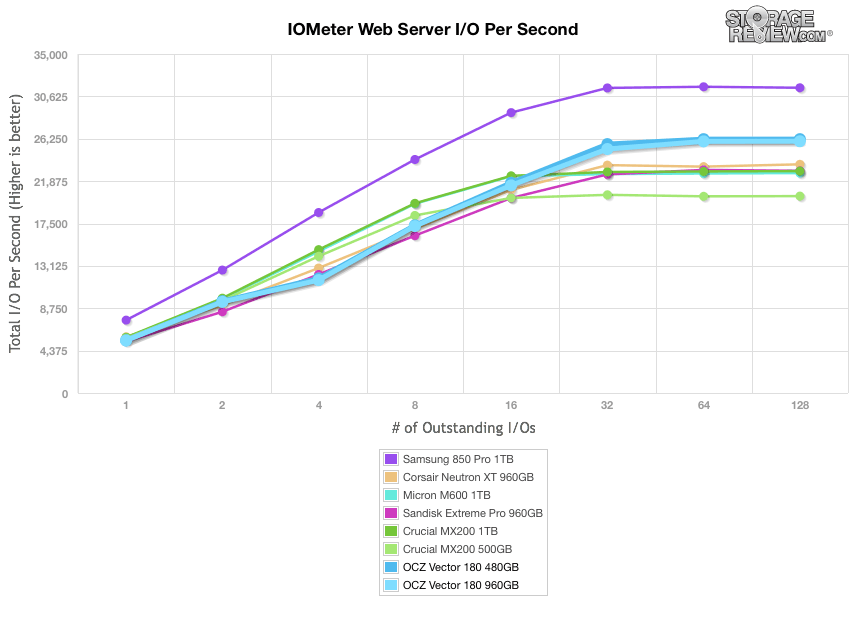 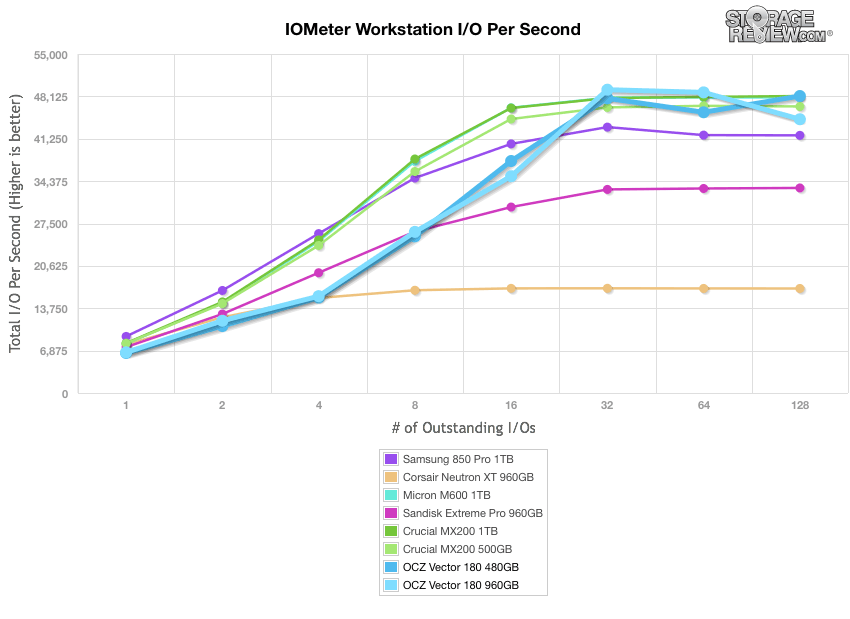 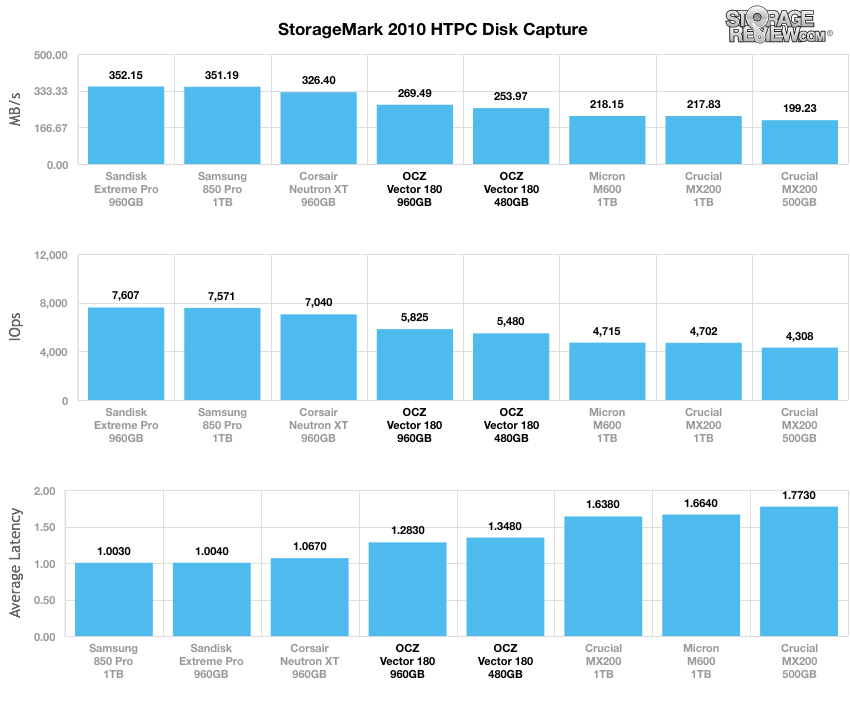 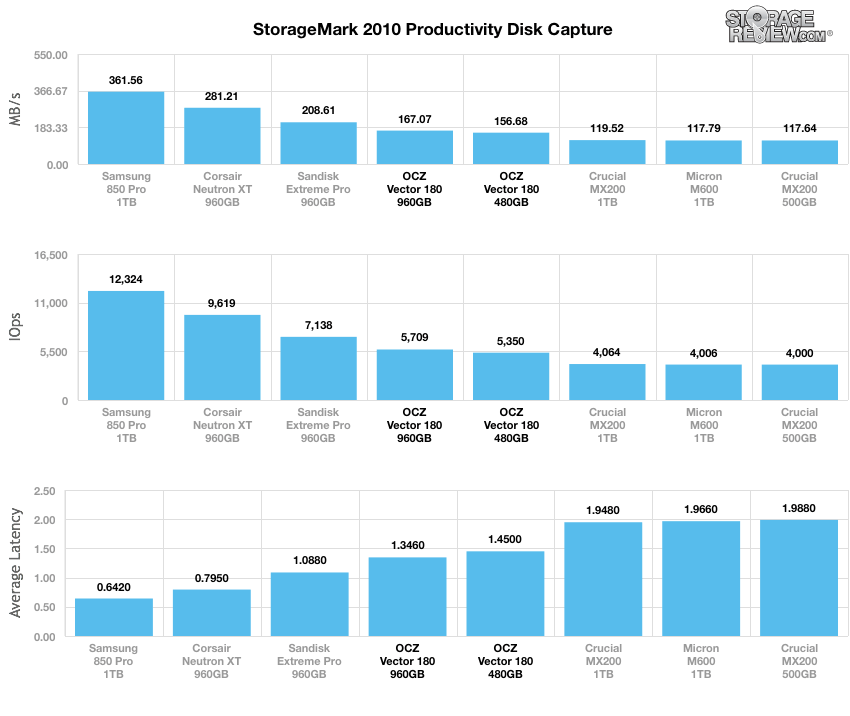 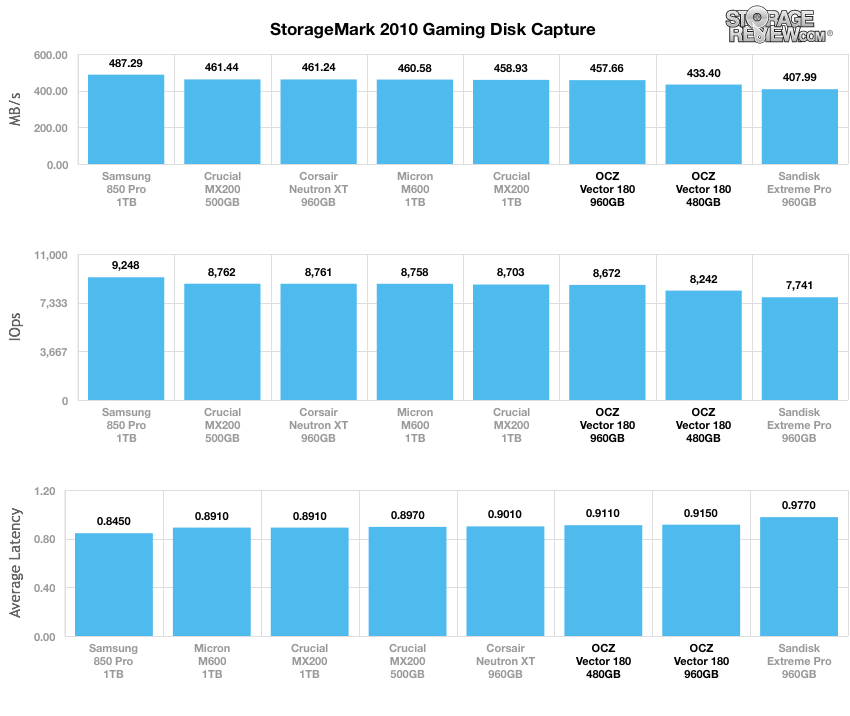 When it comes to features and functionality, the Vector 180 line is certainly progressive step and a solid addition to OCZ’s portfolio of SSDs. With OCZ’s recent release of reliability statistics for their SSDs, it comes as no surprise that company has added new reliability features to their newest drive, which is headlined by its Power Failure Management Plus (PFM+) and ShieldPlus plan. Both of these features are made possible due to its in-house Barefoot 3 controller as it gives them a clear advantage over SandForce and Marvell-based SSDs. That all being said, the PFM functionality protects the SSD in the event sudden power loss and other instabilities by taking action to preserve inactive user data after detecting power anomalies; however, this feature does not cover in-flight data. The Vector 180 is also the first Vector drive to feature OCZ’s extensive ShieldPlus warranty plan, a service which helps to eliminate all of the hassle and pain that usually comes with support and warranty claims. As we stated earlier, it accomplishes this by simplifying the return process and removing any cost to the consumer. This is by far one of the best warranty plans on the market, setting the bar for other storage companies.

As far as performance goes, the OCZ Vector 180 boasted some class-leading performance during our mixed workloads (particularly workstation), consistently placing at the top of the leaderboard among the tested consumer SSDs. This was highlighted by the Web Server profile, where it stood at the top of the pack; this was a noticeable improvement over its predecessor’s, the Vector 150, subpar results. When measuring single workloads, however, the Vector 180 drives ranked at the bottom of the leaderboard in both 2MB sequential and random benchmarks. Its performance picked up a bit during our 4K random workloads, where it boasted some pretty good write activity, though still lacking in the read column. In our real-world traces, the Vector 180’s performance slipped again during the gaming, productivity, and HTPC profiles, consistently posting results that placed it in middle of the pack with the exception of the Gaming trace where it placed near the bottom.

As far as pricing goes, the new Vector 180 series has significantly lowered its launch prices (compared to the Vector 150), with the 240GB model going for a street price of only $150; however, it’s still roughly $10 more than the newly released Crucial MX200. That being said, the MX200 is one of the most inexpensive SSDs on the market, so this comes as no surprise. In addition, sales, coupons and time will inevitably drive the price down as well. When coupling this with its 50GB/day endurance, the Vector 180 is definitely a viable option for consumers looking for a reliable drive with a class-leading warranty.

The Vector 180 is an excellent addition to OCZ’s portfolio of SSDs due to its endurance rating, solid design, ShieldPlus warranty plan, and competitive pricing. Those factors combined, coupled with the drive’s reliability feature-set, allow the Vector 180 to stand out in the already saturated consumer SSD market.