When OWC made the first MacBook Air SSD replacement earlier this year, they vowed to also release an external storage solution so buyers who were upgrading could also use their old SSD for external storage. OWC has made good on the promise, releasing adaptations of two of their 2.5″ drive enclosures. The Mercury On-The-Go is the first to hit our test bench. The enclosure features an polycarbonate acrylic outer shell to deliver the style, with a USB 3.0 interface that’s Mac and PC friendly.

When OWC made the first MacBook Air SSD replacement earlier this year, they vowed to also release an external storage solution so buyers who were upgrading could also use their old SSD for external storage. OWC has made good on the promise, releasing adaptations of two of their 2.5″ drive enclosures. The Mercury On-The-Go is the first to hit our test bench. The enclosure features an polycarbonate acrylic outer shell to deliver the style, with a USB 3.0 interface that’s Mac and PC friendly. 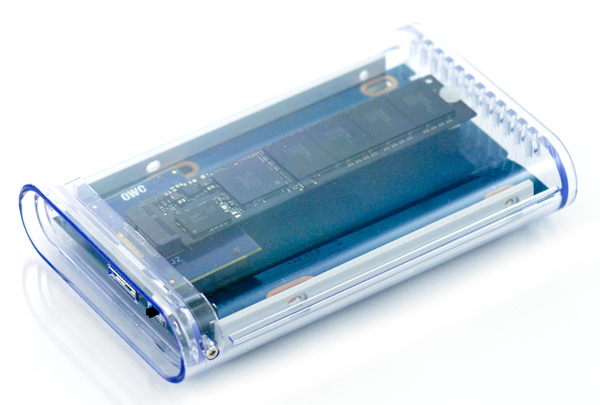 The biggest trick in getting these enclosures to market is that OWC had to design an interposer card to get from Apple’s proprietary SSD interface to standard SATA. The little PCB may not look like much, but it’s quite an innovation and it’s the only one that we know of on the market. The card opens up new life for the sluggish SATA 3Gb/s SSD Apple uses when upgrading a MacBook Air to OWC’s Aura Pro Express 6G or their first generation Aura Pro Express SSD.

It should be noted that the enclosure isn’t new for the MacBook Air SSD, OWC has sold this case for standard SATA drive use for some time. This is of course the first time it’s being used with their interface card though, which lets users get more life out of their stock MacBook Air SSD. 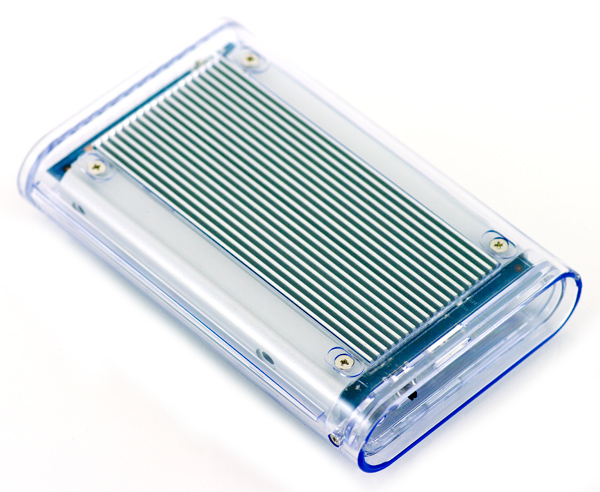 The enclosure body is transparent acrylic all the way around, except for the cutout on the bottom for the aluminum heat sync. While not exactly necessary for this use, the slatted bottom does give the enclosure a bit more texture when handling the unit and adds to the clean, elegant look. Being able to see the SSD inside adds a bit extra to the “cool factor,” it immediately reminded me of my first Swatch watch, which was clear plastic, showing all the parts inside.

Overall the enclosure feels very sturdy, with no flex even under extreme pressure. It will certainly stand up to road warrior use. If you’re afraid of scratching the case, OWC also includes a pouch for the enclosure which has plenty of storage room for the cable and other accessories as well. 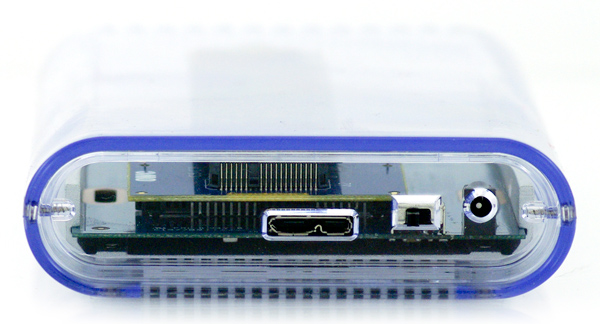 The back of the unit houses the USB 3.0 port, along with an on/off switch and optional power adaptor. The on/off switch is a very nice touch and something that’s not seen very often in 2.5″ enclosures.

Inserting the stock MacBook Air SSD into the Mercury On-The-Go is simple. Two screws on the side of the enclosure are removed and the PCB slides out. The Apple SSD gets inserted into the OWC card, with the rear being seated on a nylon support to keep the drive from flopping about. From there the drive may be connected and formatted for Mac or PC use. OWC includes a surprisingly robust manual that covers both of these procedures for those who are unfamiliar.

Given most buyers of this enclosure will be those who upgraded their MacBook Air SSDs and have their old drive still laying around, this easily fits into the high-performance category since an SSD will be inside. Fast transfer speeds are a must, which is why USB 3.0 is a perfect go-to interface choice for multi-platform compatibility, even for MacBook Air users, who have to make due with USB 2.0. Thunderbolt may have been nice, but it’s a technology that isn’t quite mainstream yet.

We measured the performance of the original 128GB Toshiba-powered Apple SSD with CrystalDiskMark and found speeds measuring 184MB/s read and 154MB/s write, which saturates our USB 3.0 connection. While the MacBook Air can’t take advantage of these speeds through its USB 2.0 port, using it with another computer such as a desktop for backups or file transfers makes it very worthwhile.

For buyers of the OWC Aura Pro Express 6G SSD, the new Mercury On-The-Go USB 3.0 enclosure is a must for external storage if you hold on to the stock SSD. This enclosure breathes new life into the old MacBook Air SSD, which with its proprietary interface, may go unused otherwise. The USB 3.0 version of this case offered plenty of speed, topping 184MB/s read and 154MB/s write in our tests.

In terms of looks, we haven’t seen a more eye-catching design than the plexiglass OWC enclosure to date. Matching looks with performance, this case offers the perfect blend to suit any mobile user’s needs. If we can complain about anything, the case is bit large for the gumstick SSD, although there is a minimum width associated with the SATA connection with limits OWC’s creativity for now.

Overall though we really enjoy the Mercury On-The-Go for its innovative SSD adaptor, stylish design and great performance.