Patriot Memory is not a brand traditionally associated with external storage, but the company’s Gauntlet line of wireless external hard drives is part of an effort to broaden that image. The Gauntlet 320, announced in October, offers 320GB of onboard storage intended to supplement the limited internal storage available on mobile and portable devices such as tablets, smartphones, and laptops. Patriot provides a Gauntlet Connect app for Android, iOS, and Kindle Fire to streamline its network configuration and provide storage access on mobile devices.

Patriot Memory is not a brand traditionally associated with external storage, but the company’s Gauntlet line of wireless external hard drives is part of an effort to broaden that image. The Gauntlet 320, announced in October, offers 320GB of onboard storage intended to supplement the limited internal storage available on mobile and portable devices such as tablets, smartphones, and laptops. Patriot provides a Gauntlet Connect app for Android, iOS, and Kindle Fire to streamline its network configuration and provide storage access on mobile devices. 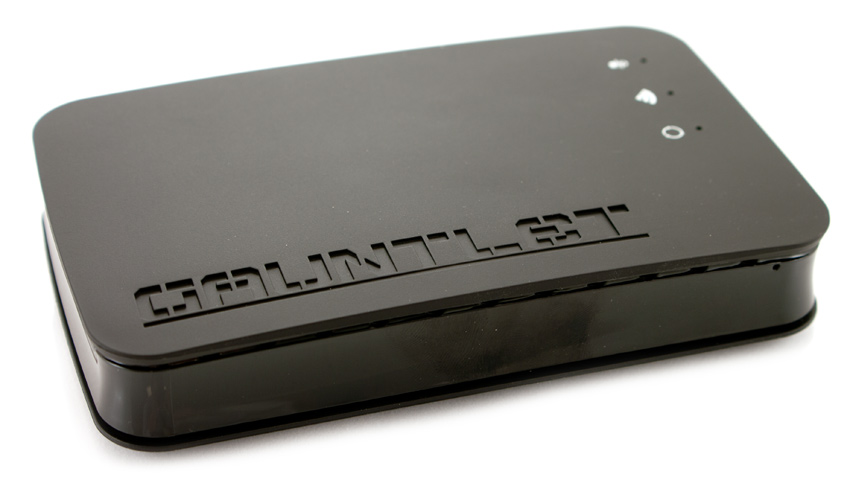 The Gauntlet 320 can be operated with DC power or may be operated with a built in researchable lithium-ion battery. According to Patriot, the internal battery is capable of powering the unit for up to 5.5 hours of active use. Patriot has imposed a limit of eight connected devices, of which up to five may transfer data simultaneously. The Gauntlet 320 is shipping now with a street price of $145.

The Gauntlet 320 sports a simple plastic chassis that keeps its weight low at the expense of heat dissipation. The enclosure feels sturdy enough for everyday use, and the power button and battery level button seem durable.

When the battery level button is depressed, an LED gauge displays how much charge remains on the internal battery. 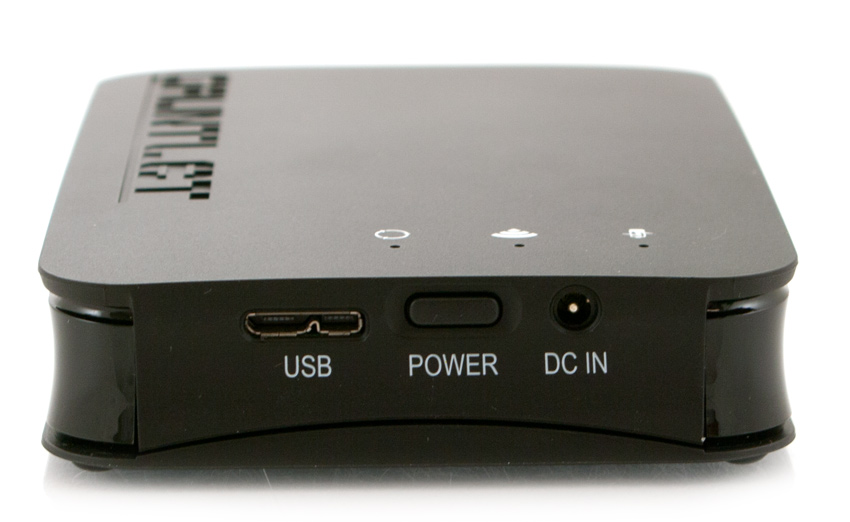 The Gauntlet features a Micro-USB 3.0 port for local direct access. Three LED indicators on the top of the drive illuminate when the device is connected to DC power, when the wireless transceiver is active, and during drive activity.

As expected for a mobile device, the Gauntlet 320 is simple to set up for the first time. Since the unit arrived without a strong charge on the battery, we began by attaching the included DC adaptor. Surprisingly, while the device has a typical DC barrel-style power jack on the chassis, the DC adapter itself turned out to use an USB-A cable to connect to the drive; a Micro-USB power supply would have allowed the Gauntlet 320 to share chargers with some of the mobile devices it is intended to connect to. 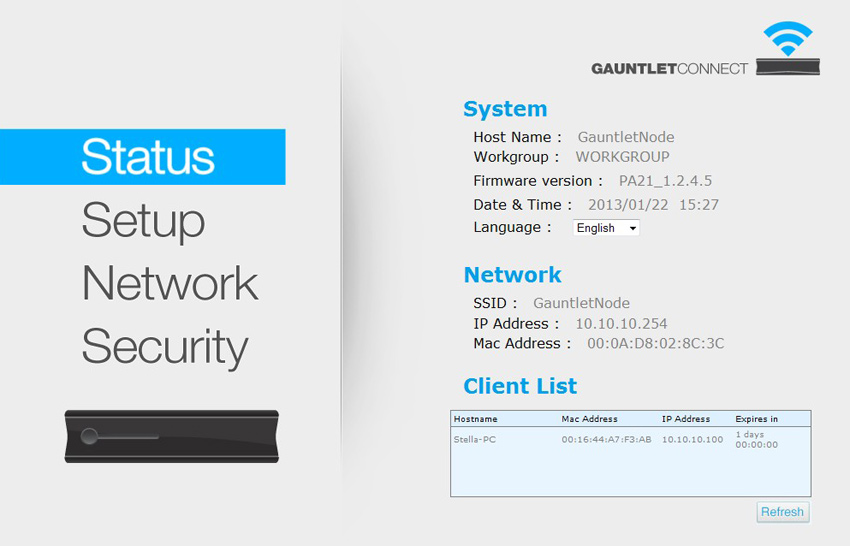 The unit took about a minute to power up and for its SSID to be picked up by our laptop’s wireless interface. One disappointment about accessing the drive wirelessly from a laptop is that the drive’s IP address must be entered manually in a web browser to access the GUI or to browse to its network shares in Windows Explorer or OS X Finder. A captive portal-style web redirection that takes the user directly to the management GUI and a nameserver supporting network discovery would be more consistent with the intended market for the device. 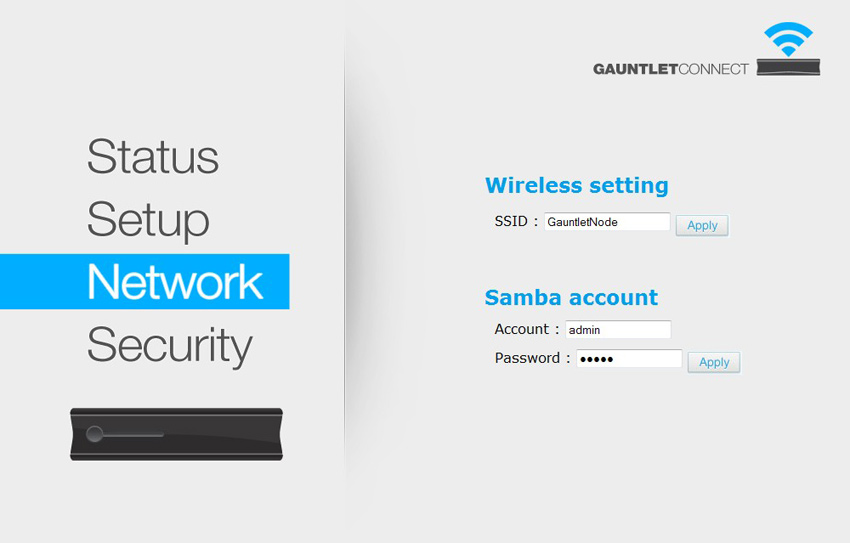 Many Gauntlet 320 customers will be interested in using the drive in environments without access to an existing network, but for most use cases the device will need to work at base camp occasionally in addition to on-the-go. The simplest way to connect to the Gauntlet 320 is to attach a cable to its USB 3.0 interface and use the drive as attached storage. The Gauntlet 320 does not allow simultaneous USB and WiFi access to avoid overheating, so when the USB interface is connected, the WiFi transceiver automatically deactivates. With additional configuration via Gauntlet Connect or the web interface, the Gauntlet 320 can integrate with other wireless networks via its Internet pass-through feature.

The Gauntlet Connect app varies somewhat between mobile platforms, and particularly for iOS where the Gauntlet must respect Apple’s DRM policies, but its primary functions are the same regardless of the app’s host device. Patriot has provided integrated media playback features for Gauntlet Connect, which also allows the user to use Connect to access the media then delegate playback to a different app instead.

Connecting the Patriot Gauntlet 320 to our consumer test platform utilizing USB 3.0, we measured its transfer performance with IOMeter. With a sequential load, the Guantlet averaged 88.3MB/s read and 87.9MB/s write. Switching to random 4K access it measured 118 IOPS read and 283 IOPS write.

Many mobile devices still provide little in the way of storage in an era when a single feature-length 720p HD video file can reach a gigabyte in size. Patriot’s Gauntlet series has helped push a new class of external hard drives that incorporate wireless access and battery power in order to provide a complete infrastructure for accessing data on mobile devices and in the absence of traditional Network-Attached Storage devices.

While the documentation isn’t great and setup could be more smooth, it’s still not terribly onerous to get operational with the Gauntlet. Tablet users are the key market here, the Gauntlet provides storage and port constrained tablets with access to up to 320GB of content and media. For those users the Gauntlet is easy to get along with and the option to operate on battery is useful.

The Patriot Gauntlet is designed to solve a specific problem encountered by owners of mobile devices that lack storage for a portable media library or are not suited to serve as a shared file depot during fieldwork. Customers that need this functionality will find Patriot’s Gauntlet 320 up to the task despite a few rough edges.